Saved From the Scrapheap: The Mysterious Raleigh Sports 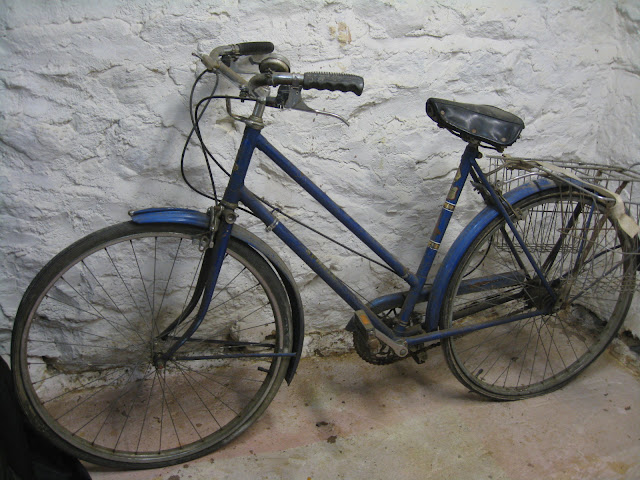 When we last left the ladies Raleigh Sports that nice woman in my neighborhood gave me, I had just cut the lock off in my attempt to think like a wily bike thief. Now I was left with a filthy, dusty and beautiful bike.
This three speed work of art was made in Nottingham, England. At first, all I had to go on for other information was by what was on the down tube, which told me the bike's point of retail origin was Vic's Cycle Shop in Stamford, Connecticut. The label said Vic's had Bicycles and Lawn Mowers “Sales & Service” and was located on 293 Shippan Avenue. Unfamiliar with any bike shop/lawn care equipment hybrids in my neighborhood, a quick bike ride to that address only yielded a laundromat.
Later, I did a Google search for Raleigh bicycles and came across a blog by a man named Sheldon Brown – and an article he wrote on how to tell how old a Raleigh three-speed was by checking for a two-digit number stamped on the Sturmey-Archer rear hub. I wiped off enough of the grime on the hub to find the number 72, which, if what he wrote was correct, meant the bike may have been made in 1972. But another clue on the frame (the word "Sports" printed on the down tube) suggested the manufacturing date was 1968. I wanted to send a note to Brown to ask him more questions about the article but discovered he had died in February of 2008. 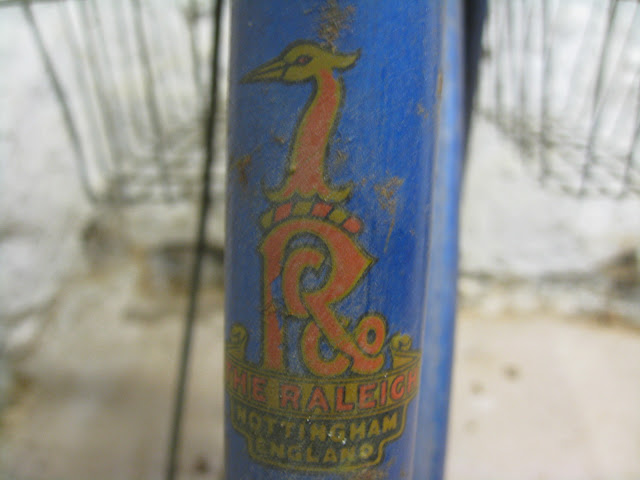 Even though I couldn't find the bike's definitive birthdate and origin story, I did know that someone – in Shippan Point, where I live today – sure loved this bike and used it for city riding. Not only were there farmer's market-ready baskets on the back but a bell on the handlebars that I rather liked. 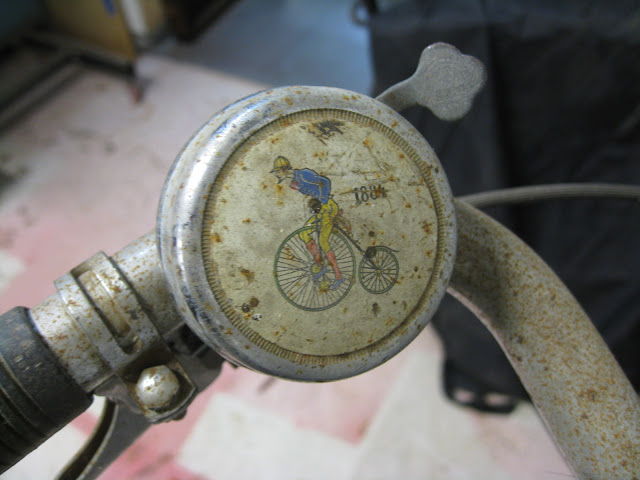 The bike left England with a beautiful crank...that I thought had some turns left in it. 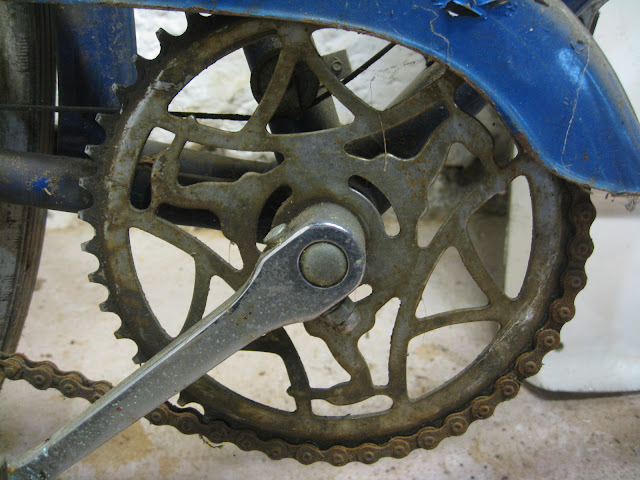 The baskets, the seat, the bell - everything about this bike screamed: we have to make a run to the grocery store. So I decided that's where it needed to go.
I set to work cleaning the Raleigh. Not only was there a lot of dust on every available surface, but the three-speed internal hub was frozen. I sprayed a little lubricant into the hub's opening and gave the cable a few pulls to free it up. I wasn't sure what else to do since the only thing I know about internal hubs is that you can't usually put bikes that have them on trainers. 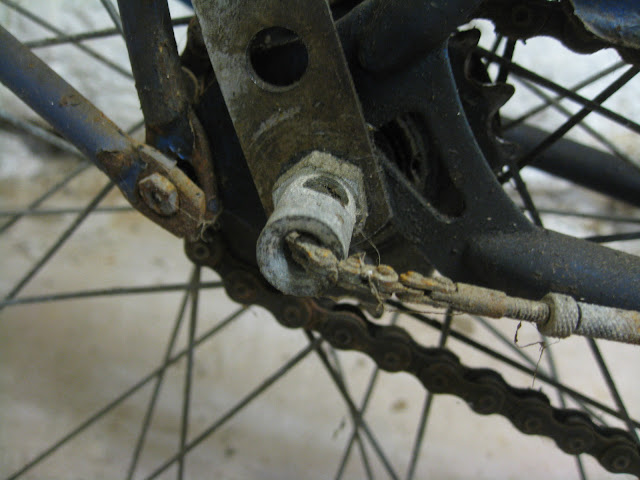 Thankfully, the cracked tires held air. A quick ride across the shop floor told me that any ride outdoors this bike would take would be its last. So I waited until a sunny day and after putting on my helmet and getting on the surprisingly comfortable seat I pedaled slowly to Fairway. The old three speed hub decided to meet me more than halfway there by giving me two functional speeds which I attained with a dodgy shift lever. After a slow and somewhat jittery ride I chained the heavy Raleigh up and returned a few minutes later with my groceries. 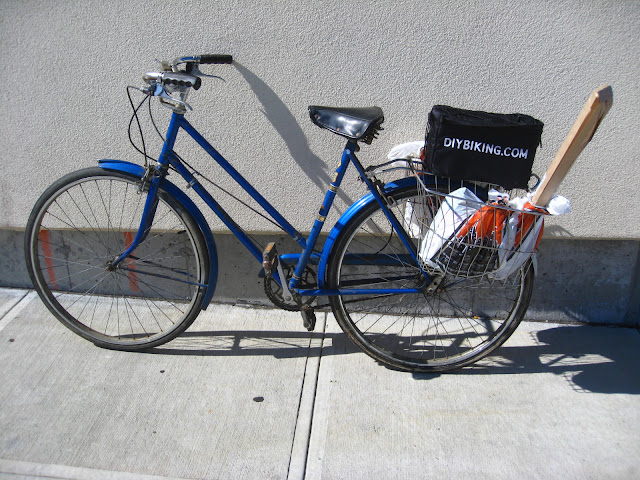 Now I admit I don't usually eat bagettes, but you can't ride a bike like this from the grocery store without a bagette sticking out of the basket. It's part of the credentials.
I was able to get the bagette and the other groceries home safely (and slowly) and when I stopped the bike I knew it wasn't going to start up ever again. But I was glad to give it a last ride.
When I brought it back inside, I set it up on the PCS-12 and began the work of taking it apart. The tires and wheels went first, and the rusty fenders went next. The seat went into my box of seats, and the bell went into my drawer of bells and whistles in the 304. 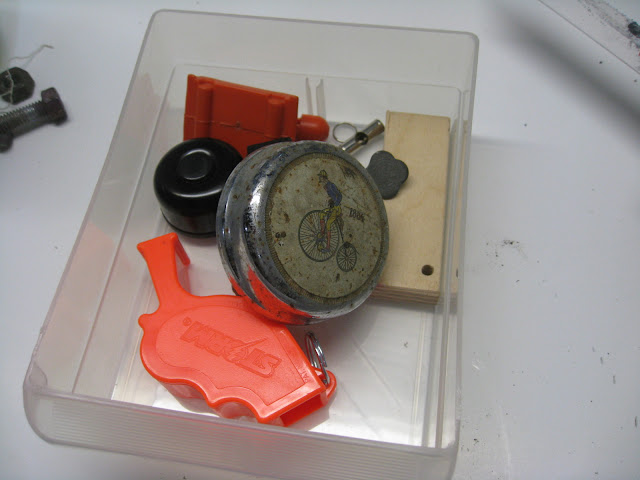 A lot of this great bike, I knew, was going to end up in the Metal Only bin at the Stamford recycling center. The stripped frame would end up on my Wall of Frame, but after cleaning it aggressively, I still couldn't take my eyes of that crank. 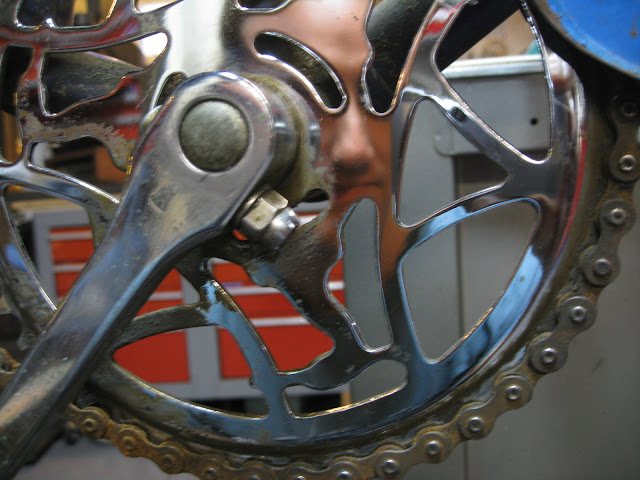 This bike didn't just need to go to the grocery store. It needed to be immortalized for all time.
After I removed the crank from the rest of the bike, I was able to clean it up even more. I then found a shadow box and carefully placed it inside. Once I had centered the crank, I drilled two holes in the back of the frame so I could insert some bolts and cap them with two nuts each – and earth magnets. 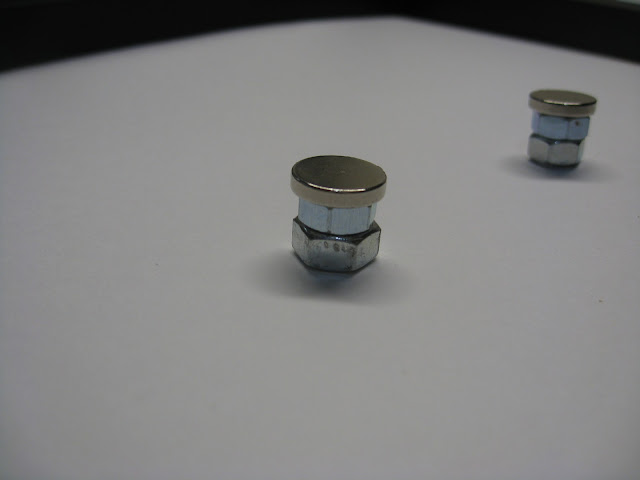 I had long determined that these magnets would be strong enough to hold the crank, so when I lowered it into the shadow box it held on. I found a place in my home and hung it on the wall. I ended up not learning a whole lot about this bike, but I sincerely thank Raleigh for making a great bike that lived as a practical machine and died as a work of art. 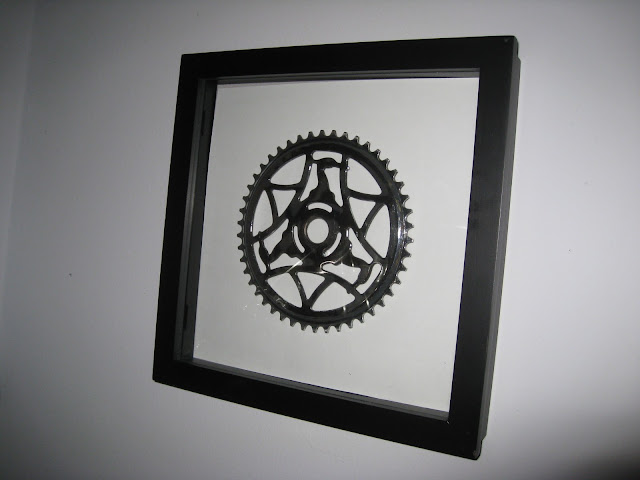