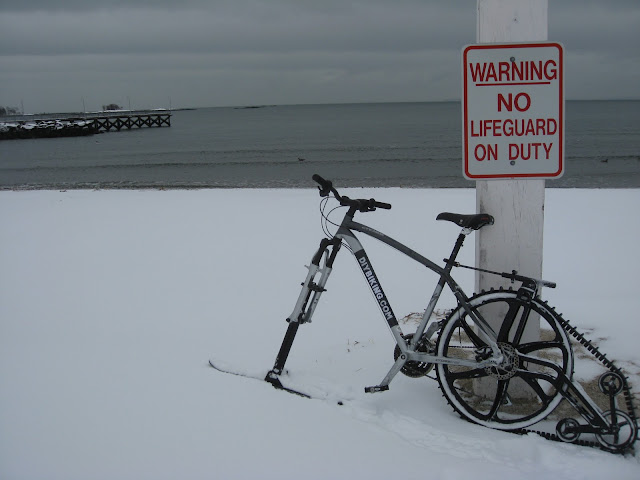 If you live in Connecticut, now isn't the best time to be a committed cyclist. Yes, you can ride your bike indoors on a trainer or on rollers and if you want to ride outdoors, you can wear a large number of layers before setting off. 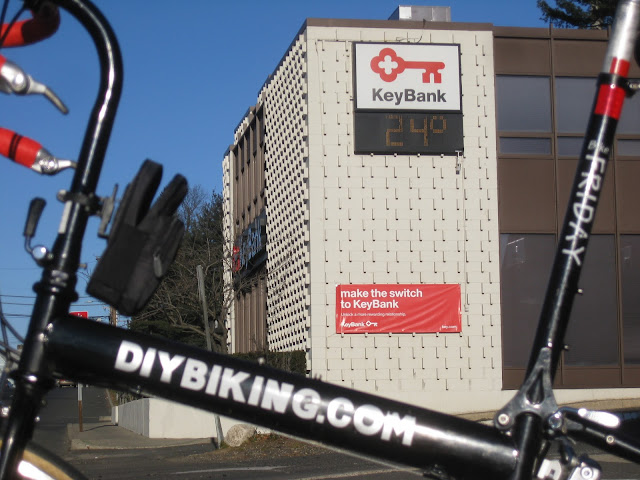 Unfortunately, there are limits. I can take being cold most of the time - I did live in New Hampshire for eleven years - and the day the picture of the Bike Friday was taken I was wearing five layers on my torso, two pairs of gloves and a balaclava. Unfortunately, what I own isn't a Louis Garneau Matrix balaclava, which is what my dad swears by, but a cheap alternative I was fooled by. As a result, my boogers froze, which is a Superman,-meet-Kryptonite! moment for me, so I turned back.

Yesterday was a different story. I did wear most of what I had worn before, but the wind after the first storm of 2012 the wind wasn't nearly as bad. The four-glove combo worked alright (that consists of thin wool gloves and traffic cone-colored ProMar Fish Gloves from Cabela's flagship store in East Hartford, Connecticut. I wanted them because I was interested in good gloves to wear while riding at night. It works fine but I will eventually break down and buy some lobster gloves. From what I understand I'll look like the Nightcrawler from X-Men dressed for winter, but I'll be warm).

As you can see I took a ride to West Beach. The timing for the snowbike was perfect in that the roads weren't plowed and the snow was fluffy and not too deep. I mistakenly donated the pedals of that bike to the Trifigura Foundation's Work & Learn Business Center during the Domus Bike Drive, so I borrowed the pair from the Dahon Matrix.

It was a huge breakthrough, because even though my feet were a little cold during the ride the snowbike moved faster and easier as I was wearing bike shoes and using clipless pedals rather than heavy boots. So I was able to make it to the end of Shippan Point before riding across the field and straight to West Beach. Meanwhile, Pacific Swim Bike Run had one of their classes that morning and posted a picture of it on Facebook: people lined up on carbon fiber works of art attached to trainers in their beautiful shop. I think it's only because they probably don't have enough snowbikes to go around.

I'm looking out the door right now and I can see the roads still aren't favorable, so either build a snowbike with a Ktrak kit or ride indoors this fine Sunday morning. Either way, dress accordingly.