Secrets to a Clean Workshop (Got Any?) 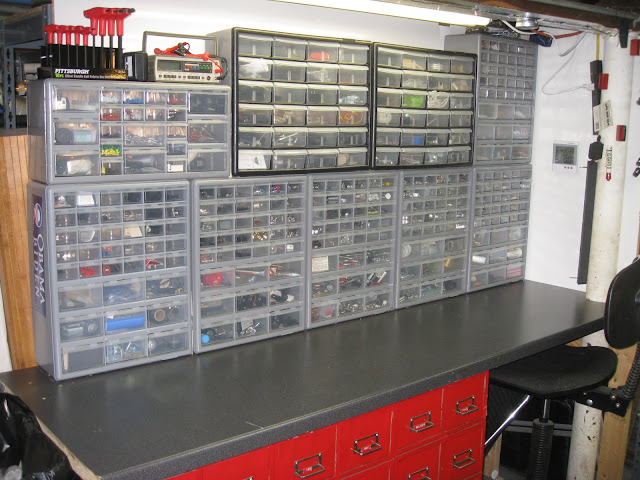 Don't be fooled by the sight of the 304 (my name for my series of plastic organizers that yield 304 little drawers total), my workshop is not as organized as it looks. It's an illusion, like that guy in Times Square who was electricuting himself last week for several days.

Because my workshop is in the basement of the home I live in, it is under a lot more pressure than, say, a home office. Things get stored in and around my shop. The furnace and water heater are nearby, to say nothing of the washer and dryer. Worst of all – and the spouse-of-a-workshop-keeper may have trouble understanding this – when anything needs to be built, modified or improved for any other part of the house, the workshop, the poor workshop, shoulders all kinds of thankless pain. 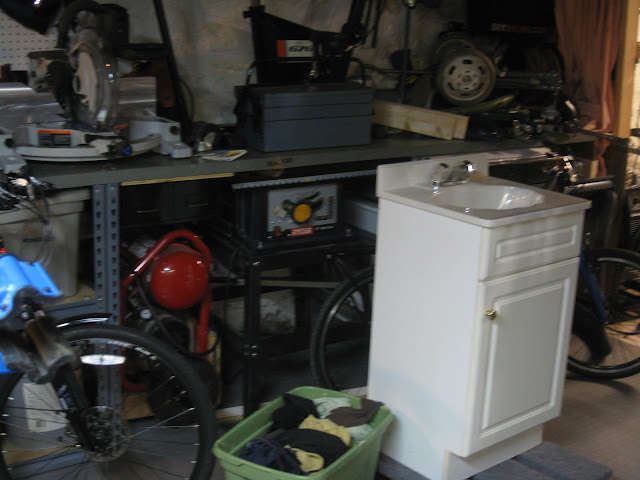 This is a picture I took last week while standing in the middle of the floor, looking toward the wall: you've got bikes on the floor (that aren't being ridden or worked on), a small exercise bike on the cluttered workbench, clothes that need to be taken upstairs, and a dreadful bathroom vanity that I desperately need to get rid of. A distressing sight, and your shop might look like this too. And even worse, some of the clutter (in any good shop) doesn't even look like clutter. Check this out: 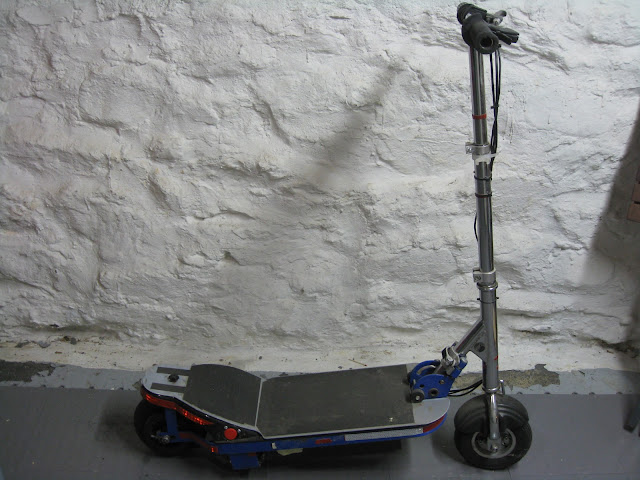 This is a 24V Spartan Sports FS-101 electric scooter. I bought it a month after I moved to Stamford in 2004 and while it was great to go the 13 blocks from Grand Central Terminal to my girlfriend (now wife) in Manhattan and back again, I haven't used it since Bush was in office - not that those two things are connected. One day, it just stopped working.

The thing is, I have the parts I need to fix it. Till then, it can sit in the unused space right next to the furnace. Eventually. I'll get around to it. One day, when I have some time.

Any of those phrases sound familiar? 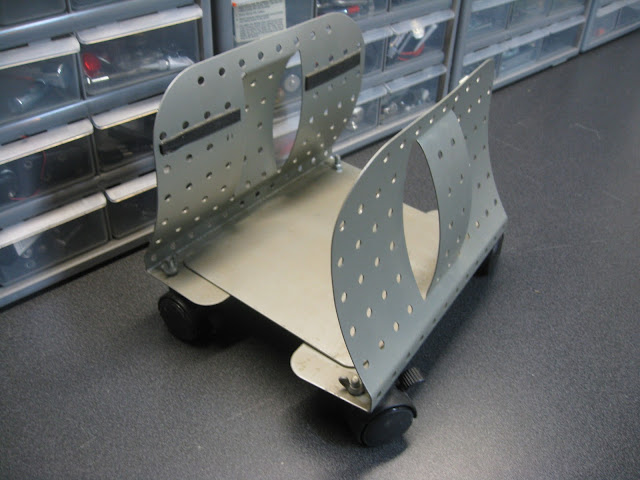 This I bought at a tag sale a couple of years ago. I think it is for files or something. I just liked the casters. It has no use in the shop. None. I already have a huge plastic tub filled with casters (and this very weekend I have to go out and get more, as none of the Strategic Casters Reserve has the kind I want for a project) so this is something else that should really go out the door.

Here goes: there are only two things found inside any workshop – and I do mean any workshop: density, and empty space. If you're like me, a lot of your time spent in the shop is dealing with those two things. If things are pushed together, they take up less space, and when they are spread out, it seems like they take up more. As a rule of thumb in my shop: the more dense an item is, the more likely it should be placed as far away from the center of the shop as possible. Tools used the most get placed closer to the center, stuff used the least gets pushed further away. The more empty space there is in the middle of the shop - where walking, hammer-swinging and so forth take place - the better.

So I wandered around the basement, looking and thinking about density and empty space, when I found a whole lot of the latter on the wall behind the clothes washer.

I don't walk on the air behind the clothes washer. I don't have to reach through it to get anything. The drill press doesn't hover in that space. It's valuable empty space. So what should go there? 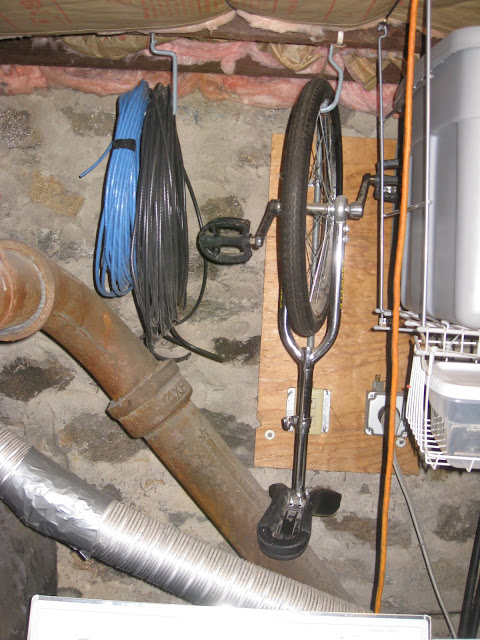 While biking one day I found a unicycle at a tag sale and thought to myself, as naturally I would: that may be useful someday. So I C-3PO'd it to my back and pedaled it all the way from Westchester County back to Stamford. Since then, it had hung on a hook among all of my other bikes, taking up valuable hook space. I don't know when, how or if I will use this unicycle for anything, but it seems to be made to hang on the hook like that. The seat is even perfectly shaped so that it isn't touching the drain pipe.

Moving the unicycle freed up a hook on the 'bike wall' which is where...wait, hang on a second....okay I'm back: seven bikes are presently hanging.

I made the decision to move all the bikes to the other side of the wall, where they would all hang from one joist. That way, I could put the hooks as close as possible. If you do this, I recommend you do some kind of reverse Tetris: bikes are shaped different, and if they are hung along a wall in a certain way, you can fit a lot of them in one place. I have also more or less arranged them by frequency of use, and even have a little sign above the hooks reminding me where each bike is supposed to park. It sounds goofy, but it worked: the same number of bikes stored in less space – which freed up more space. 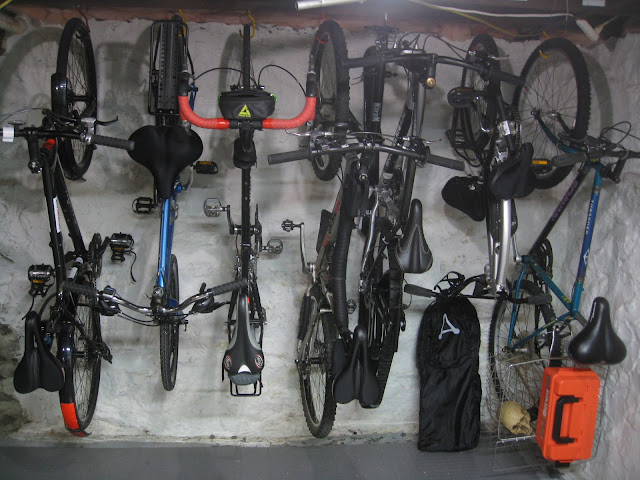 Seeing this picture reminds me: I need to find a better place for the skull (what can I say: others have battled this workshop and lost).

Now I have a few more bikes, as you know. South Norwalk is a folding bike and can sit on the floor next to the DiamondSchwinn. But for now I found some more available wall and hung it there, and it can probably stay indefinitely since its small shape keeps it out of the way of just about everything. (As you'll notice, I finally added a bigger DIYBIKING.COM logo, but because the top tube was so small, I had to go lowercase). 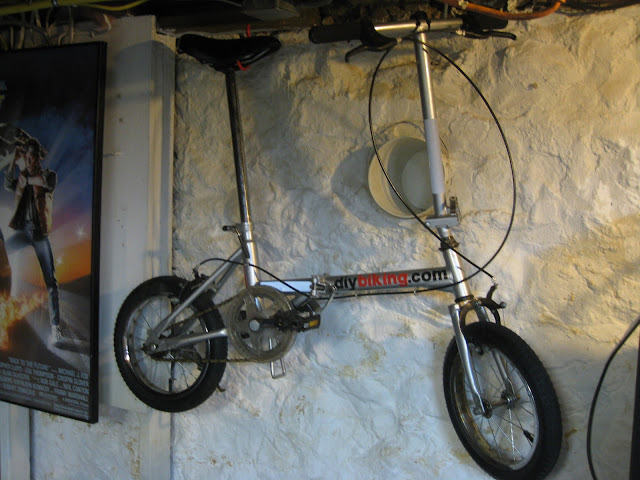 Another rule of workshop organization I try to follow: when possible, put it on wheels. Especially the heavy stuff. I like that my homemade bike workstand, which began life as a Craftsman rolling tool cabinet, can roll away from the center of the shop when something else needs to go there. I also put casters (I have plenty, you know) on those heavy-duty shelves you can find at Home Depot and elsewhere. 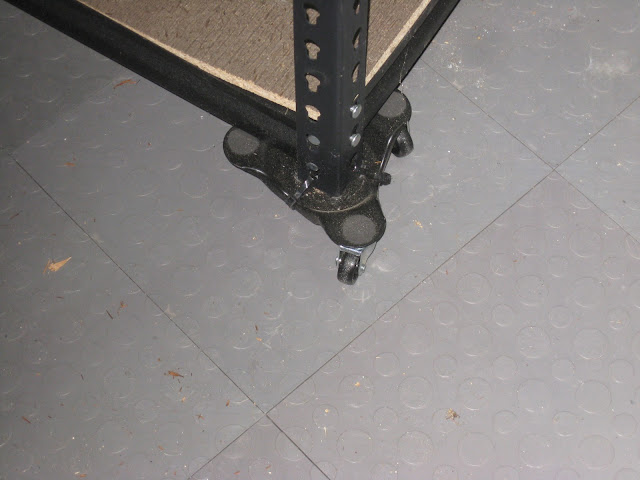 Even if you don't think you're going to move big shelves after you put them down, put them on wheels anyway. The unit pictured above was to hold all of the tubs of seasonal clothes and some other seasonal items. Since it needs to be accessed exactly twice a year, I was fine with putting it in a fairly inconvenient spot: under the shop stairs, there's a lot of empty space, and I don't mind spending a minute rolling the big shelves underneath twice a year. It takes the tubs further away from the central part of the shop – freeing up empty space for tools and other useful stuff. There also I placed a couple of tubs of stuff that, literally, will stay dormant until my wife and I move into another house (admit it, you have some stuff like that too).

You'll find some stuff with wheels needs a place to go when you're not using it. Take my modified tag sale find table, for example. 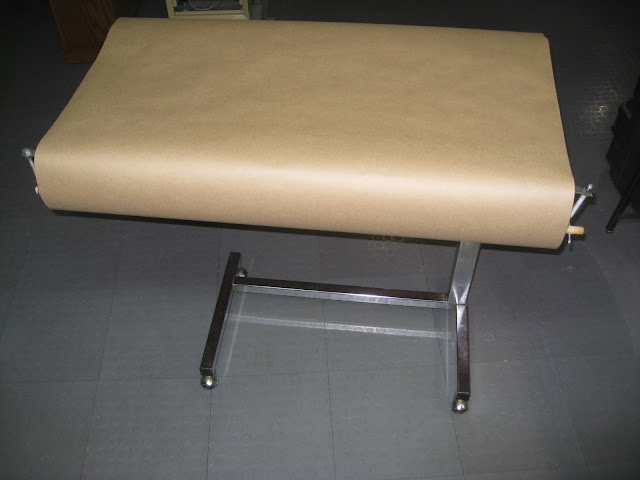 Now, there's a lot of empty space between the table and the rolling frame on the floor, so I hit on the idea that the unit could nest inside a heavy-duty shelf. As long as the bottom shelf gave enough room for the wheels and one wouldn't put tall items on the middle shelf, it could work...if I modified the shelves slightly. I cut the shelves, and took a piece of steel (in this case, a leg from an unused shelf unit) and bolted it to the shelf supports. The shelf seems just as sturdy as it was before, and the tag sale table is not only completely out of the way when not in use, but it is in easy reach when I want it. 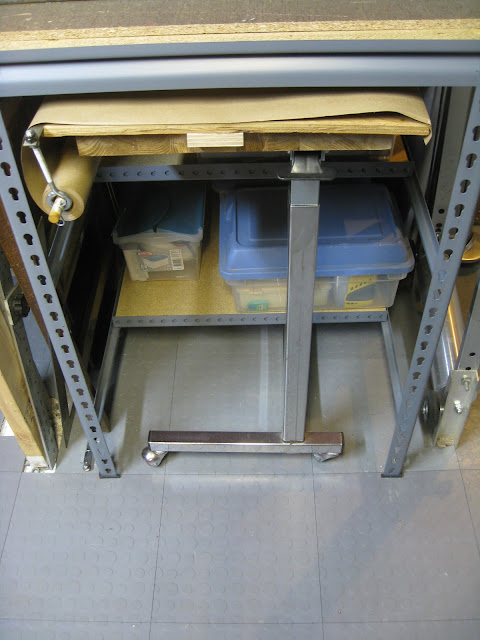 When my dad was upgrading his shop years ago, he gave me a rolling bookcase which stores a lot of plastic tubs with bike parts in them. It's great, but I wanted to see just how much floor space I could get. So after realizing that I never use the workbench area to the right of the chop saw for anything remotely useful – and there's a lot of empty space there - I took the bookcase apart and temporarily transferred the plastic tubs to another bookcase my dad actually built (which I put hidden casters on and it eventually went in the area next to the furnace the scooter once occupied). 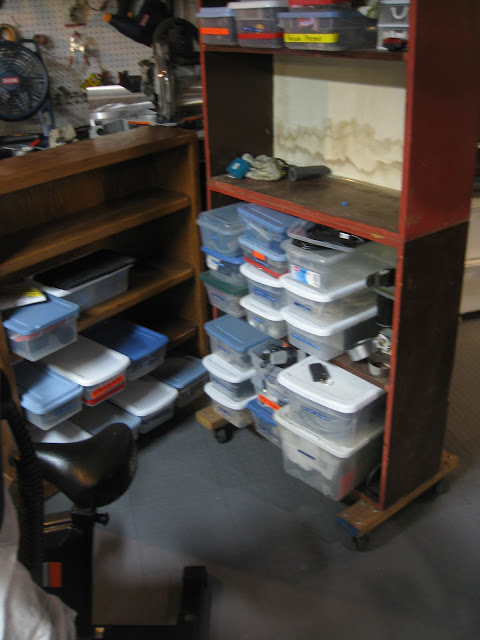 By having the two older bookcases side by side instead of one tall unit, I didn't have to stoop to pick up any tubs and everything could be seen and reached a lot easier. Plus, it gave me one more long shelf along the top – empty space that I easily filled. I could still cut long pieces of wood on the chop saw without the tubs interfering. The result was just brilliant. 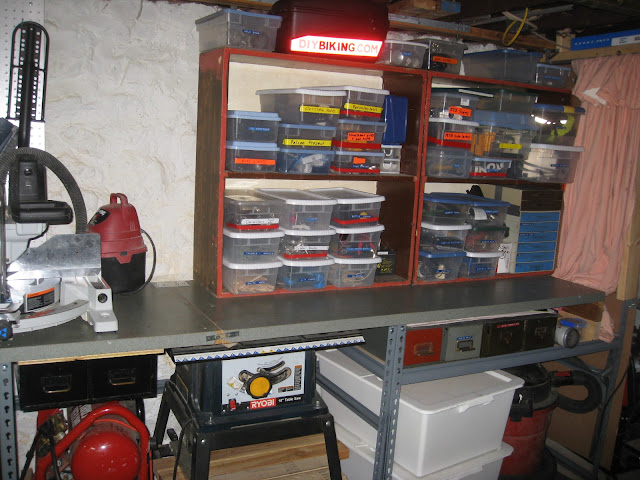 Then I went through and consolidated tubs, since tubs had stuff in them as well as empty space. For instance, I saw no reason why front derailleurs couldn't fraternize with rear derailleurs, so I put them both in a single tub and labeled it as such.

Throwing away and donating stuff was easy once I got in the right mindset; and was carring a trash bag with me and had a donations box next to the 304. For instance, I don't need or use the little round plastic tubs that come with a roll of electrical tape. Tape is where it is and doesn't need a cozy. Likewise, I don't need screwdriver bits that are worn. Instead of throwing them away instantly I'd return them to the drawer. Maybe it's like putting a pen that doesn't write back in the pen caddy thinking tiny dwarves will refill it with ink at a later date. Never mind. 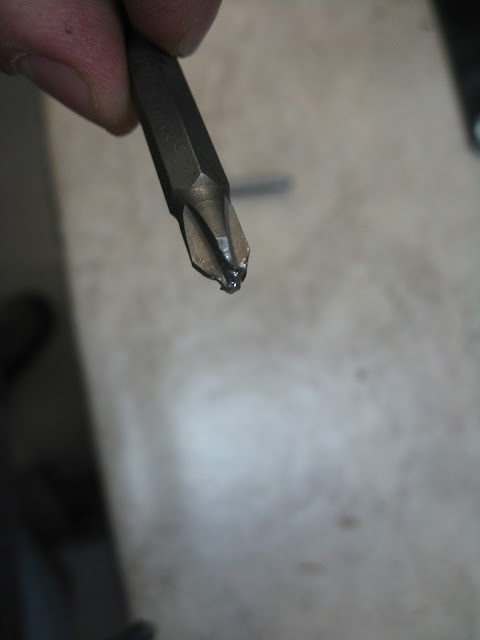 A few 'maybe I'll work on this/fix this/rebuild this/use this someday for something items' went away. I'm already having trouble remembering which ones.

The final touch for the organizational spree was another steel bookcase (this one, sadly, without wheels) set up next to the shop sink. This was great because it led to another inspiration. 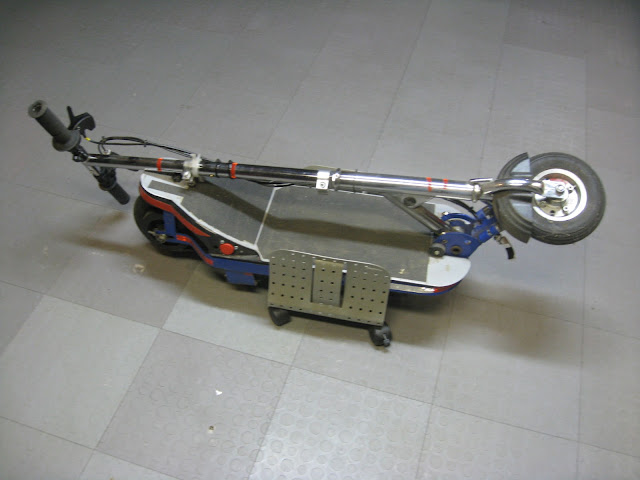 Yeah...I could fold the scooter I'm never going to fix and put it on the wheeled thing that I never use. That way I can roll it under the bookcase next to the diner booth I never sit in, and, when the time comes, someday, in the future, when I have the opportunity to work on the scooter, I can pull it out and do just that.

So that's the wisdom this week on shop organization: by thinking of everything in terms of density and empty space, pushing the seldom used items further away from you and putting the more common items closer, and everything in between on wheels, you too can become an expert at organizing things you never use. Thanks for reading. 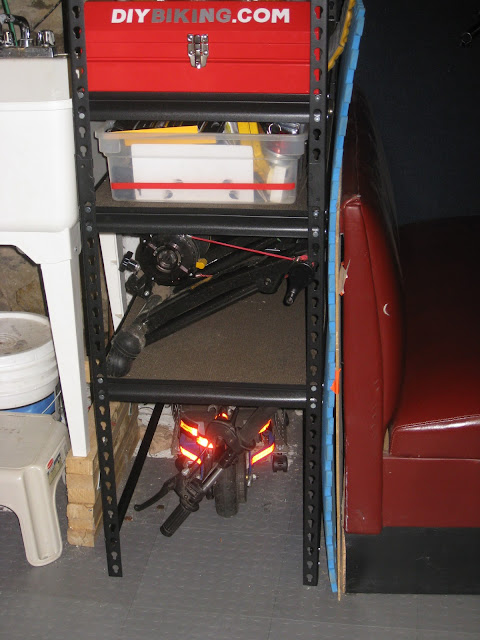