This past June I was on a morning bike ride with the recumbent. I had traveled early in the morning on Rt. 1 north to Westport to follow Rt. 136 on the way back. While passing through South Norwalk, with over 10 miles to go to get back home, I came across this. 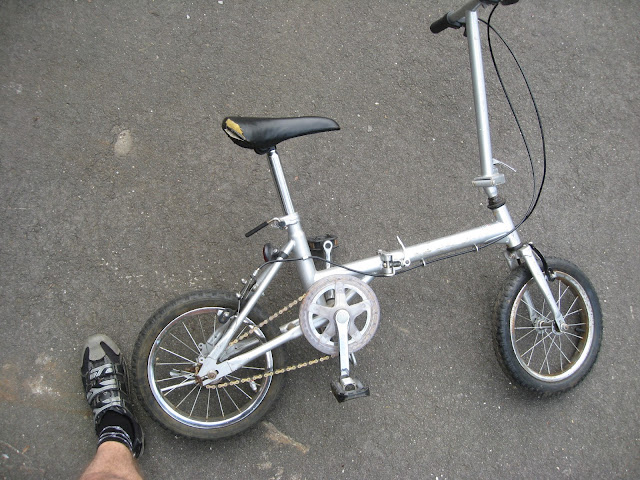 I looked at it a long time to make sure I was seeing what I was seeing: an abandoned folding bike. It was on a public sidewalk far from houses and buildings. There was nobody around. The tires were flat, the wheels were bent, and the headset was terribly loose, so I figured it wasn't ridden to its current location. It also had a kickstand, and I reasoned that if someone had cared for the bike it would be sitting on it in a secure place anyway, or carried inside since it was so small.

I have a habit of picking up things I find along the ride, whether it is a piece of a trailer hitch or a nice woman's credit and debit cards. But I had to balance my impulse with my current situation, which is that I had no immediate way to get something this size home.

I folded the mysterious little bike, and at that moment the sun came out. I just knew I couldn't just leave it there. It was a very Linus from The Peanuts moment: "It isn't such a bad little folding bike. All it needs is a little love." 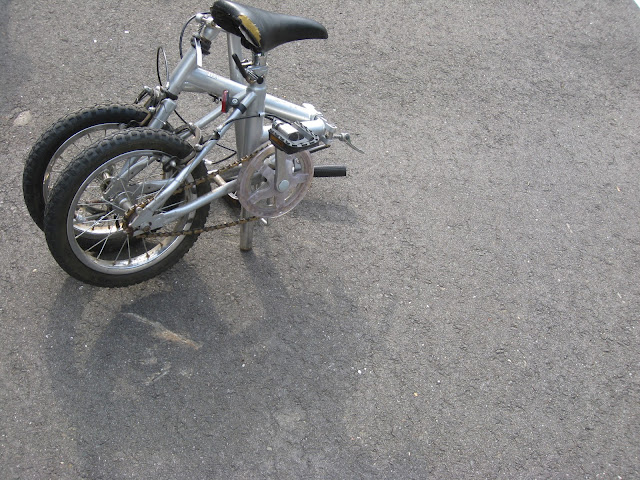 I then remembered a picture I saw in Momentum magazine of a pretty woman with pink hair sitting happily on Xtracycle cargo bike carrying a Brompton in the back. The photographer and the woman were one in the same (Lillian Karabaic of Portland, Oregon) and The caption was 'Carry it on a Bike'.

I didn't have an Xtracycle, but thinking of that inspiring image made me wonder: what do I have?

I opened up the bike box and rummaged in my tool kit. Ever since repairs of the recumbent began to increasingly involve welding, I had begun carrying things in the kit I didn't normally, like hose clamps normally used in plumbing applications. I also carry, on a regular basis, wire ties and duct tape; the former can be used in an emergency if a screw pops out of a rear rack or the like. But I was now using the ties and one of the clamps in non-advisable manner. 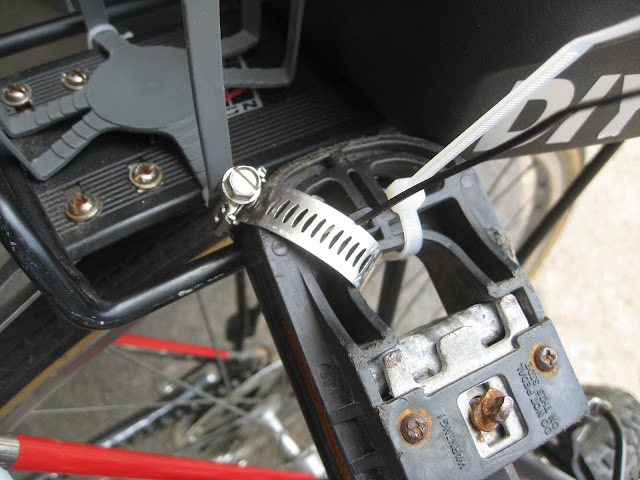 I also used some electrical tape to keep the bike from unfolding itself, and had to use some of my reusable wire ties to secure it to my rear rack. Don't try this at home – or on the road, for that matter. 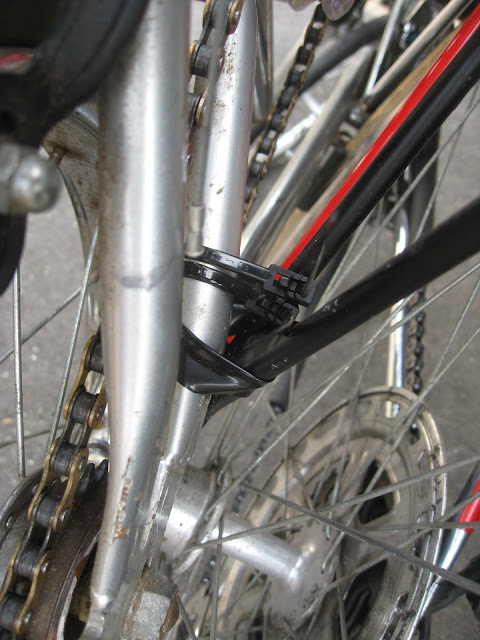 Before long, I was able to secure my fine no-fendered friend to the recumbent. It looked like the bicycle equivalent of Leonard, the circus performer with the small, conjoined twin, 'Lenny' on the 'Humbug' episode of the X-Files (you know the guy), but I was reasonably sure it would hold. 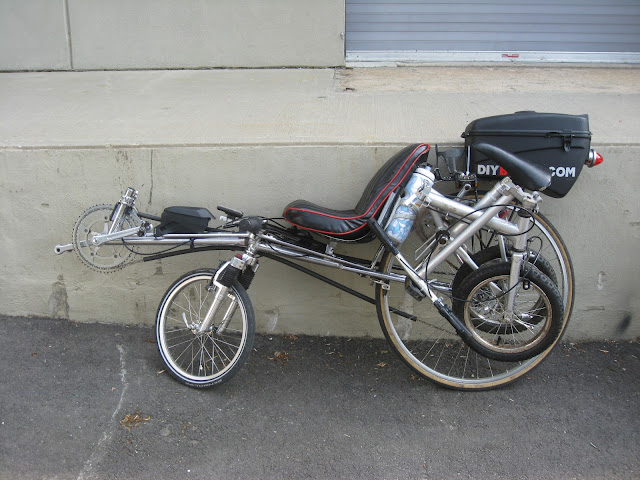 The presence of a folding bike tumor on the side of the rear rack did affect the recumbent's handling, but I was still able to pedal it home (even breaking 20 miles an hour in places) using Rt. 136 and then Rt. 1 from Darien. I had to dangle my right butt cheek off of one side to act as a counterbalance, but the recumbent didn't get any more or fewer stares than normal. When I got it home, I felt more satisfied than I normally did upon the conclusion of a 30 mile ride and put the find on the PCS-12. 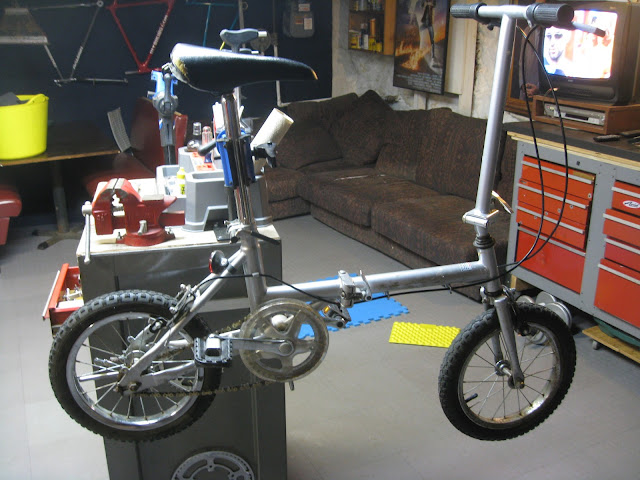 It really was in rough shape. In addition to its other ailments, the rear brake pads were useless so I fitted new ones. The rear tube held air, but the front one burst out of a split in the tire like a boil and, in typical fashion, exploded an hour later when I was doing something else in the shop.

Still not knowing anything about this bike's identity, I decided it was worth spending a little money on. I went to Danny's Cycles with the front tire in a saddlebag and asked for help in locating tires. I had never even heard of the 14” tire size before but an associate helped me determine that they did exist. Instead of leaving to buy the tire online, I ordered a new set of tires for the mystery folder with an assurance from the store that I'd be called when the tires came in.

About a week later, I got the call and headed into the store. A different associate helped me this time, and when I said 'weird size' he knew exactly which tires were mine: 14” x 1.75” Kendas.

After returning home, I resumed working on the bike. The bent rims were so battered the side of one of them had to be bashed with a hammer before they could be placed onto a truing stand. Even after cleaning it up and straightening them the best I could, the wheels weren't perfect but they turned okay, and the brakes worked better. The amount of force needed to make the bike stop told me new cables should be in order, and the pedals looked like they needed an upgrade too.

However, I still had no way to find out how it came to be abandoned in South Norwalk. For all I know, it could have been part of a drug deal gone good or a marriage proposal gone bad...or something.

Regardless of its past, it began to find a new life in my fleet as I began trying to learn more about it. Its heavy frame and rugged construction made me wonder if it was made for a life around boats at the shore, so one weekend I brought it to Mystic to see if it would blend it. 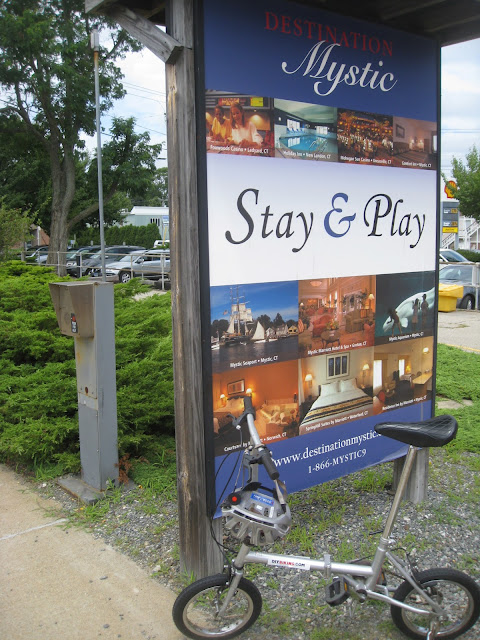 I frequently see folding bikes at or near the marina by the Mystic Seaport that look like they could be in the same kingdom, class, order, genus or even species as my bike. But none of them shared the same strange tire size. 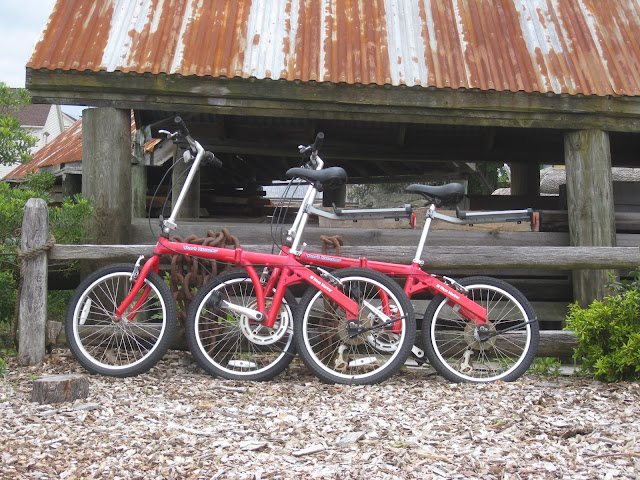 Later, after I finally put on new brake cables and some folding pedals I bought in Cleveland, I took the bike to Devon, Pennsylvania as I was heading there on a non-bike related trip. But I found that despite its rather heavy weight, it was a piece of cake to bring it on board Amtrak. 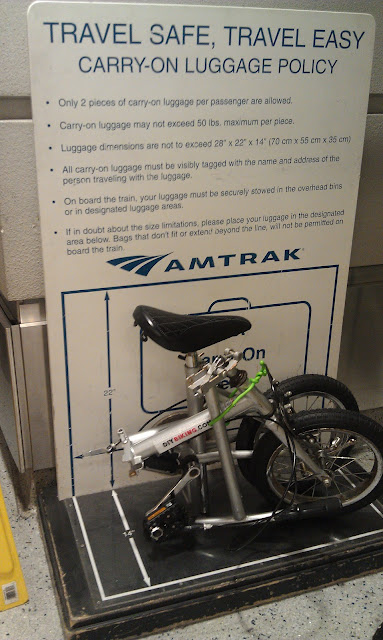 Even though the bike wasn't the best one to take on a ten mile ride, it was still a bike, and I had fun riding it. I took it to High Road Cycles (which has indoor bike parking, by the way) and asked the nice employees and some curious customers if they could identify it, but they were all completely stumped.

Folding Bike Week 2012 may come to a close with the Mystery of South Norwalk still unidentified, but no matter: though it is heavy, slow, and a little strange: I now have the Jason Bourne of folding bikes. If you know what it is or where it came from let me know...or feel free to suggest a name. 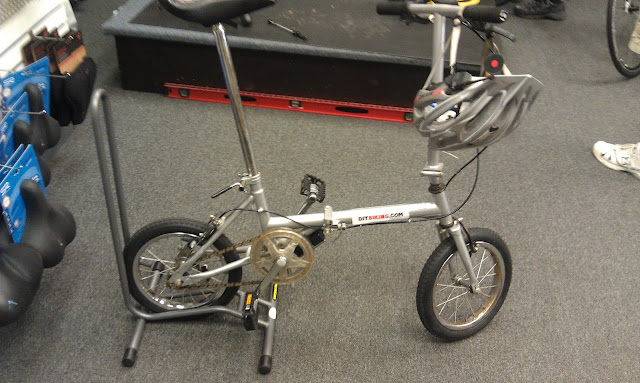