The DIYBIKING.COM Essential Guide to the Last Days of Summer 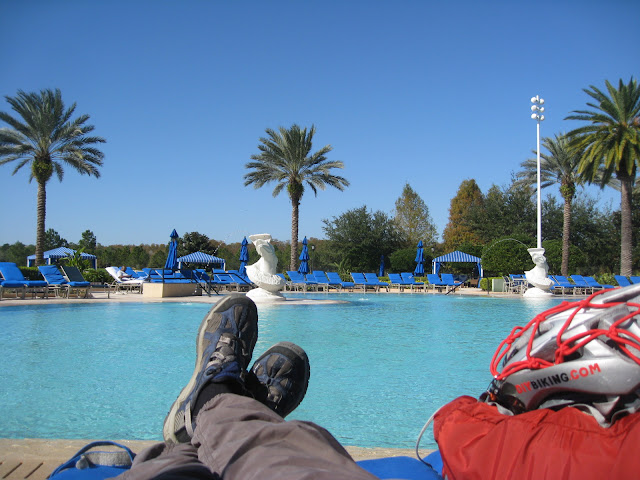 It's the end of summer. I know this only because some of my Facebook friends have been posting pictures of their children wearing new clothes and pained expressions.

However, Labor Day weekend is here and that means summer isn't over and you therefore have one or two more chances to attend the kind of gathering that requires you to put your name on a red Solo Cup.

No matter what's in store, I recommend that you follow the Rules of Summer. I don't have the time to go over all of them, but I'll just share a few:

Now if your last days of summer are at a nice resort, you may come across one of these; probably near the pool area. 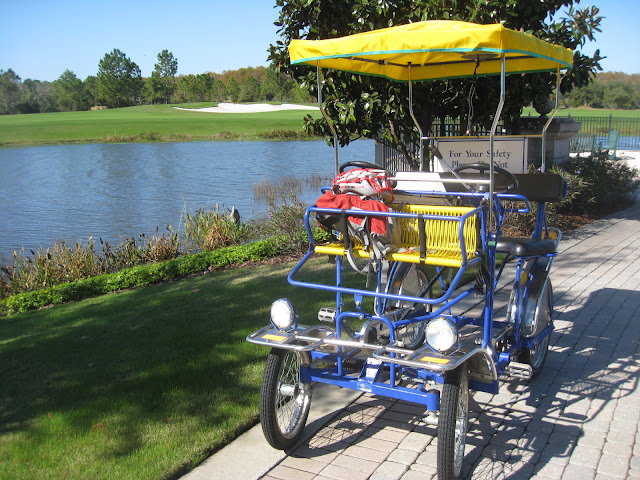 These are Italian-made Sirenetta surry bikes; you can actually buy them through the great American bike and trike company, Worksman. They are sometimes built for two or four. They are heavy, slow, look weird, are expensive to rent and can't go very far.

And you gotta try one.

On the last days of a recent vacation I was in a hotel that had these. I had already ridden a considerable distance on my New World Tourist but since I had put it away and had 20 minutes before I needed to meet my wife to head to the airport, I decided to give it a go.

Of course, since this is DIYBIKING.COM, I decided to take the surry bike for a great adventure and to answer a simple question that I'm sure has been on the mind of many a surry bike rider: what is the top speed? 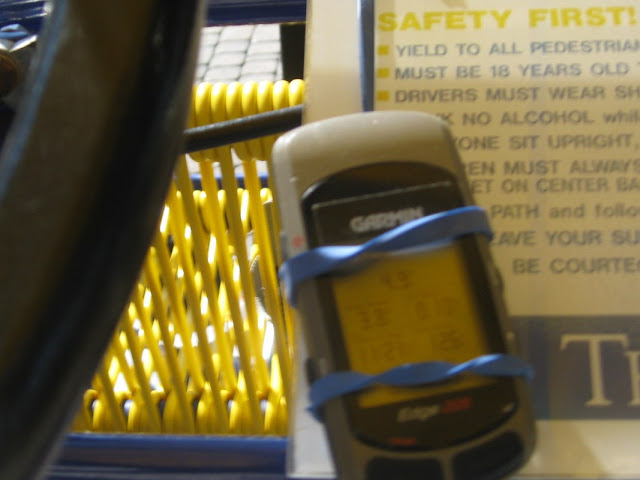 It is impossible not to feel relaxed as you pedal one of these. As a single-speed vehicle the size of a Smart Car it just ambles along. However, if you put your feet down (and I would have installed my clipless pedals if I had them on me and the hotel staff wasn't looking) you can build up some speed. I did three runs along the promenade - and may have scattered a tourist or two in my wake - and I got it up to...12.8 miles an hour! 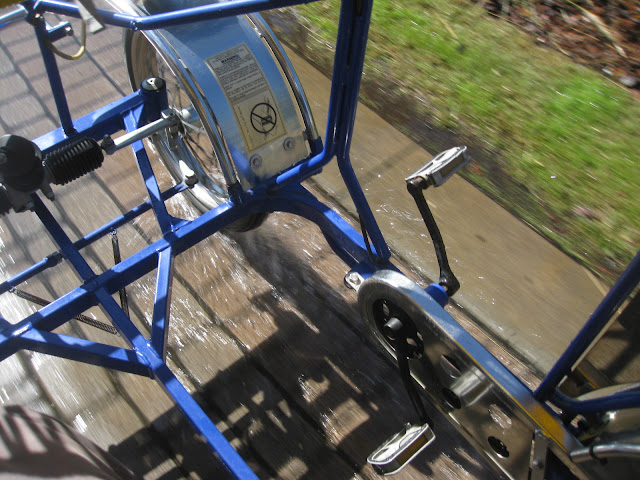 I also tried several times to make it skid but each time it would lurch, silently, to a stop.

Worried I'd be banned from the resort, I ended the ride after the third run and returned the surry bike...with a big grin. So if you have the time or the ability to ride something that has absolutely no purpose or value whatsoever, do it. It's summer. 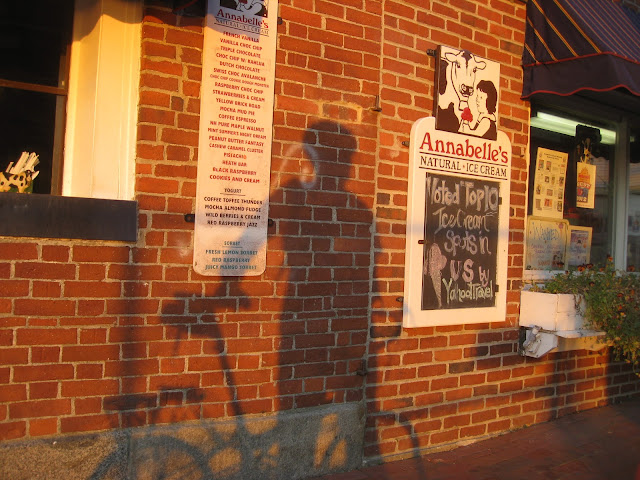 You know where they are, and if you don't or are visiting an unfamiliar area, ride around until you find one (this one, Annabelle's, is in Portsmouth, New Hampshire. Exploring the area very early one recent morning it was too early to go in, but my wife and I were able to go a few days later and it was excellent). Try to bring friends and family when you go and try to ride or walk to get there. There's nothing additional to say, really.

I know, if you aren't within driving distance of Bluff Point State Park in Groton, this rule doesn't mean very much to you. But it means a lot to me. Bluff Point State Park has been a consistent mountain bike stomping grounds for me and my cousin since before we were old enough to drive there ourselves. The trails are that much fun.

On our one and only trip there this summer, I followed him closely on my second homemade mountain bike and after just a few minutes, we came to a dropoff that my cousin, M.C., barely noticed but gave me pause. Taking a 'safe way' around the dropoff, I almost immediately lost control and crashed; pitching over the handlebars for my bike to land on top of me.

After a crash, you know you are biking with a great partner when he or she can say “Are you okay?” and still be understood through their laughter.

After I assured M.C. I was fine, he offered to show me how it was done. So I took a picture of him on his second run. 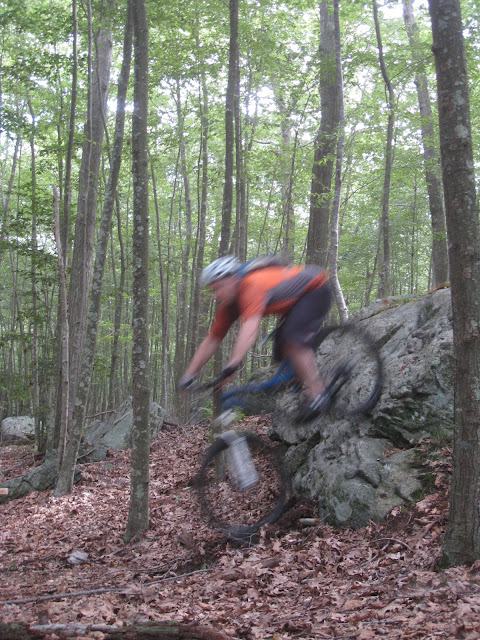 When I uploaded this, I could only shake my head: there are photographs of Sasquatch that are more in focus than any picture I've taken of M.C. on a bike.

So Bluff Point is a must for anyone in Connecticut. At the moment you may not know this because a search for 'mountain biking' at the new Connecticut tourism site Ctvisit.com, doesn't give you a hit for Bluff Point State Park. It's not that I expected the governor of Connecticut, Dannel Malloy, to mention road or mountain biking in his introductory letter (though it would have been nice). It's not that I expected a clip of cyclists on the bluff to be featured in one of the 'Still Revolutionary' ads. 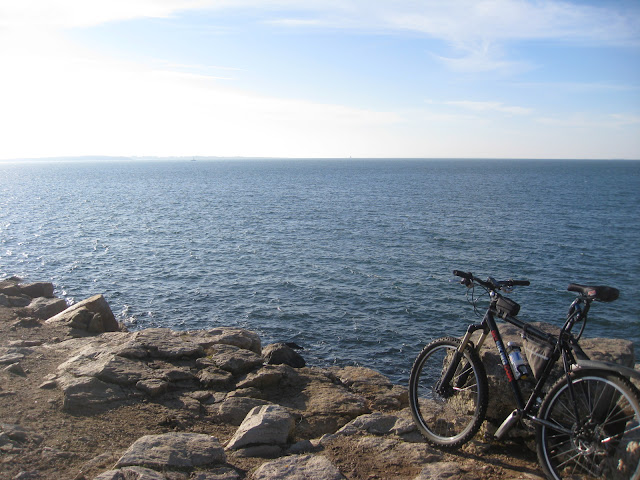 Though it would have been nice.

But a search for mountain biking on Ctvisit.com doesn't bring you to Bluff Point. Now, if you search for 'Bluff Point' you will eventually find your way to the state site, but a random person with a smartphone at a rest stop with two Specialized mountain bikes on the roof isn't going to know that as they head through the state looking for a place to ride. Now Ctvisit.com does seems useful in finding out what is going on in the state this weekend, but be aware the The Bluff Point Omission (that sounds like a good name for a Robert Ludlum novel, doesn't it?) may not be the only gap in mountain biking coverage on the site.

You see them every summer. Under no circumstances do you keep going. I don't care if you're in the middle of the bike (or the swimming) portion of a triathalon. You stop. Even if you can see from the color of the liquid on the table that the kids are using Crystal Light and are, in the words of Stringer Bell, 'cutting their product' with warm water, no refridgeration and tiny cups you'd normally associate with NyQuil, you stop.

I stopped at a few this summer. My favorite was one on a random side trip in Pennsylvania. These two little girls were running both it and a tag sale, and one of them upsold me from a $0.25 cup of lemonade to a $10 bike that belonged to her mom. When I bought it, the two of them ran up to their mom,who was on the porch of the house, to share their excitement. I ended up chatting with the mom as I loaded the bike into my car. Since I was to be carrying passengers (one of them being my mother-in-law) I couldn't use my homemade Honda Element bike rack and instead was thankful I keep a number of tools in the car. 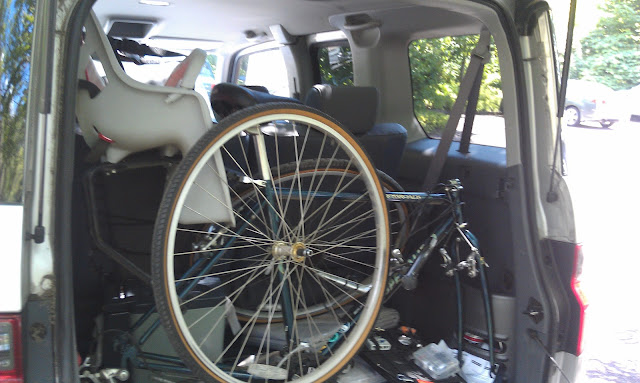 I later brought the bike home to tune it. Chatting with the mom told me she had used the bike when her girls were small and it hadn't left the garage in ten years. But the tires, brakes and the drivetrain were all good, and when I cleaned it up I found myself with a very good road bike. 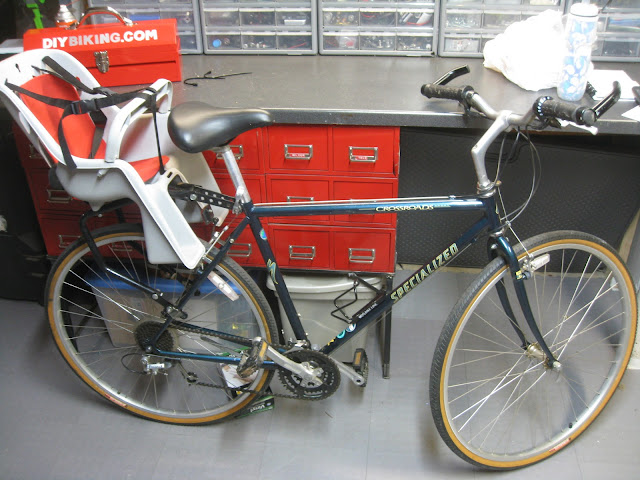 After I removed the baby seat and gave it to my cousin for his young son to use, I rode it to work several times. Since I saved a dollar each time I was more than halfway to paying back the $10.25 cost of the lemonade/bicycle combo. It was a great bike, but I already have a lot of great bikes, so I gave it to a good friend in New Haven who needed one. I had a decent cup of lemonade, got a new bike, and made a couple of people (and me) smile, so that's why I always follow Summer Rule # 31.

To often when going to or coming from things, we are On A Mission and don't let anything distract us. But stop to help if at all possible; everyone else is On A Mission too.

This very week, in glorious weather, I was riding during a lunchbreak on High Ridge Road in Stamford and came across an Otter-box encased iPhone on the shoulder. I thought about the day I met Stacey (which can happen any time of the year if you keep your eyes open) when I picked it up and carried it back to my office.

Unlike finding credit cards, I had no name. I don't have an iPhone myself, but I knew enough about this one to know I needed a four digit code to access it. All I could see on the screen was a very short list of missed calls, including a phone number (that led nowhere when I called it) and a woman's name followed by the '2' in parentheses, and no phone number displayed.

But when I pushed the power button after I put it on my iPod cord to charge, I noticed Siri, that voice-assistant thing that may or may not be a little creepy, switched on. So I decided to interrogate the iPhone:

“Siri, whose phone is this?”

“Siri, who does this phone belong to?”

The responses looked mostly like this, and its disembodied voice was talking so loudly I had to shut my office door. 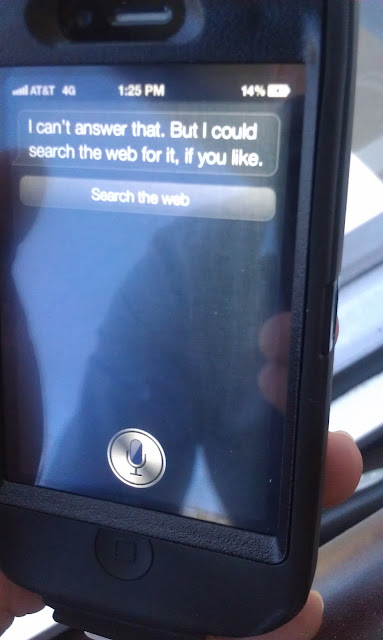 I got the digital assistant equivalent of staring at someone blankly two more times as I pressed Siri to tell me whose phone it was. As I realized Siri 'thought' I was the owner, I asked Siri 'what is my home address' and even though it said it wasn't in the address book, an email address was briefly displayed, so I followed with “Siri, what is my email address?”

I got an email hit, and promptly sent a note with 'did you lose your phone?' in the subject line.

To hedge my bets, I decided to ask Siri to tell me the phone number of the woman whose name was displayed on the incoming call. Though Siri kept misspelling the name, it eventually gave me the woman's number, and I called to ask if anyone she knew had lost a phone recently. She quickly and excitedly told me it was her husband, who had left his phone on the roof of his car when he left the house that morning. Thanks to the phone call and the email, which did reach the owner, I was able to reunite the iPhone with the owner (they both asked if there was anything they could do to repay me and I said they didn't have to do anything, but looking back on it I wish I just asked if they'd drive safely around all cyclists, which is what everyone needs to do in summer and the other three seasons of the year). 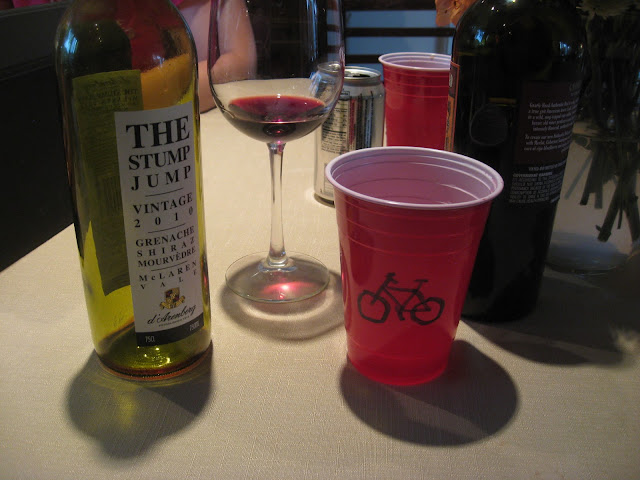