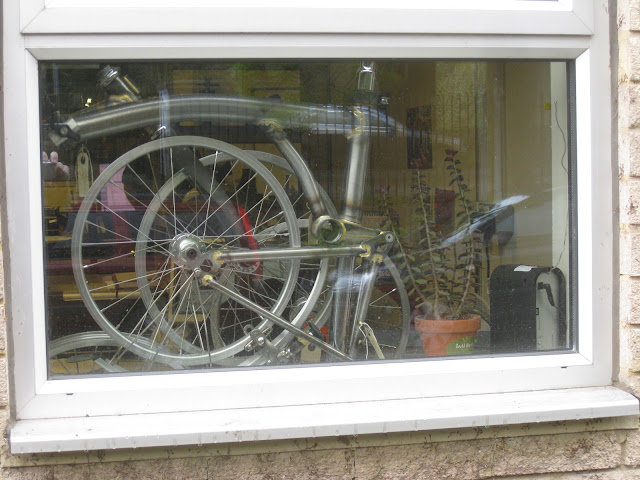 On a recent intercontinental red-eye flight, my wife and I sat on a Virgin Atlantic plane in the darkness. We were both wearing the red eyemasks that came with the strange-smelling kit - Sir Richard Branson, please get to the bottom of that - the flight attendants hand out at takeoff. We were settled in and our seats were reclined, and most of the plane was silent.

I turned to my wife. I couldn't see her because I was still wearing the eyemask, but I knew she was there.

“No, I didn't know that,” my wife whispered back after a slight pause. She may have turned to 'look' at me without taking off her mask either.

“Yes,” I said as I settled back into my seat. “That's a folding bike fact.” We both soon fell asleep.

I was still processing all of the information I had accumulated about ten hours earlier, when I walked through a simple-looking industrial building near the Kew Bridge in London and wiped my feet. 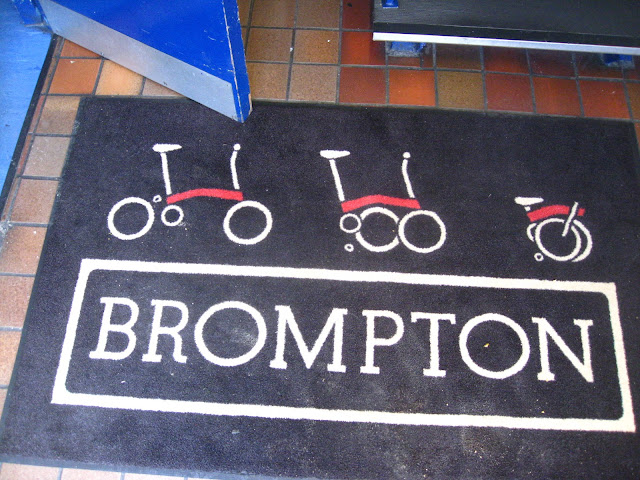 Between my U.K. and India Biking Nations posts, I was able to visit the Brompton factory. In advance I would like to thank Brompton for allowing a blogger they don't know from a hole in the wall to visit a folding bike nerd's paradise...and I'd like to apologize to Brompton for not being able to do the visit justice in my post.

I began my trip to Brompton by taking a double-decker bus, which is a must-take for anyone visiting London (and everyone should visit London). I especially like riding on the upper level up front so I can look around. 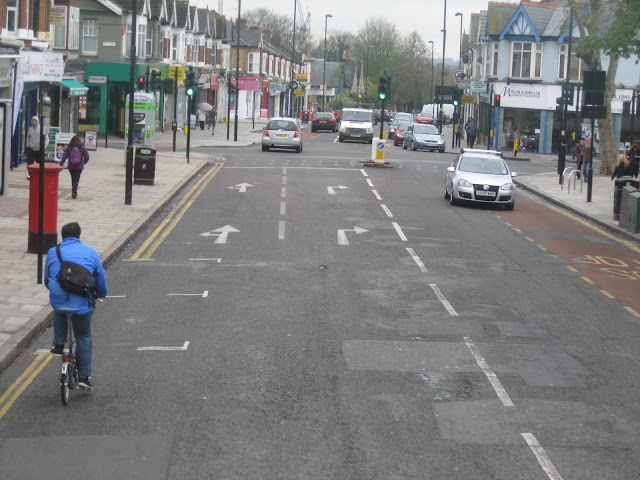 After disembarking, I walked a short distance to the building and met Hanna, a Brompton employee I had corresponded with via email a few weeks earlier. After pleasant introductions one of the first things she had me do was put on a pair of work boots. You know when you're a kid and you get to see big construction equipment up close for the very first time? I had that kind of excitement as I clomped along behind her as she opened the doors that led to the birthplace of Brompton folding bikes.

I had expected to be overwhelmed by the size of the place, but it really isn't that large inside. It didn't look like the image of an assembly line I had in my head, probably because so much of the build, as I learned years before setting foot in the building, is very precise work. The first person I saw, for example, pretty much set the tone by working methodically: turning a part over and over in a special workstand while he carefully brazed the steel. 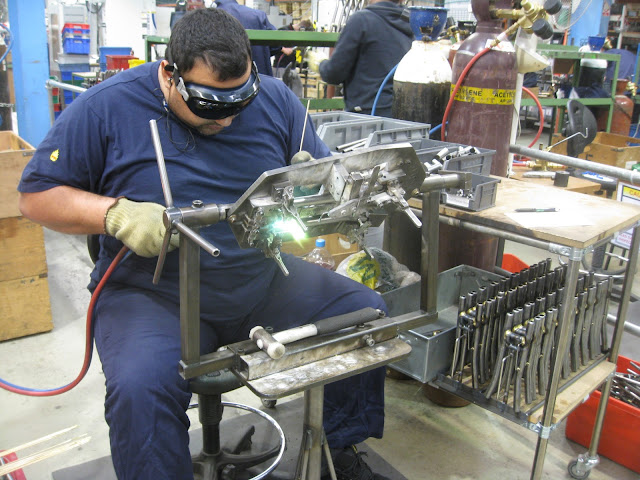 Hanna showed me one of parts up close that, for any Brompton owners reading this, is normally hidden by paint. It was only upon looking at the unpainted part my guide was holding that I understood Brompton's attention to detail and how durable the finished product – which is made up of about 1,200 parts – would be. 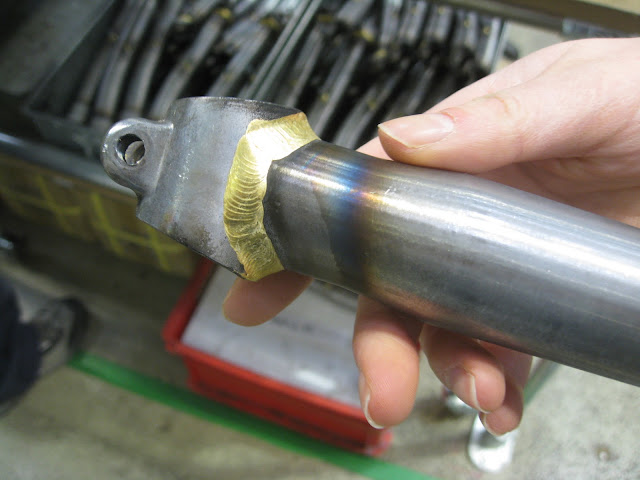 I was then allowed to hold a key part of the Brompton folding bike: the central hinge. Even though Bromptons are lightweight folding bikes fully assembled – especially if you go with the titanium frame option - the weight of this one part made me think I was holding the hinge for a bank vault. As Hanna took the hinge back, I snapped a quick picture. 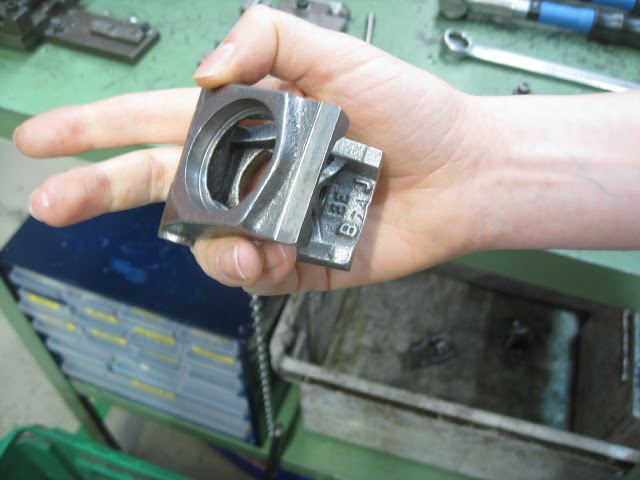 I thought about the smooth riding Brompton I rode at Trophy Bikes last year - featured in Folding Bike Week 2011 - and had a strangely humbling moment: the hinge and every other part of that bike had passed through the very building I was standing in.

We passed a few more brazing stations and stepped into a cramped and noisy room. Above the din, I heard Hanna tell me that newly-braised parts take a tumble with ceramic beads to clean them before reentering the build area. 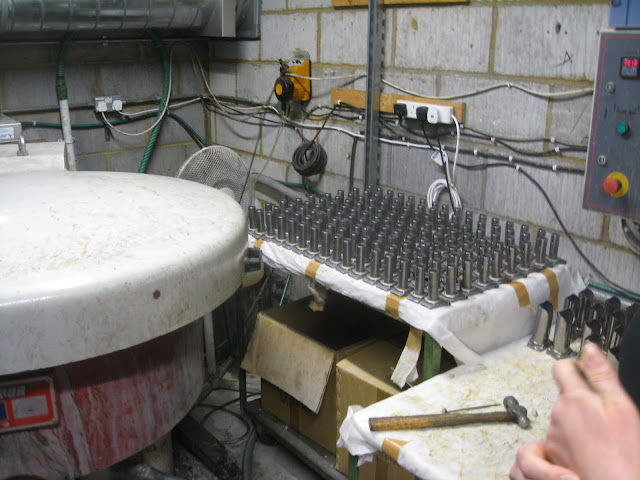 After leaving the noisy room, we stepped through a door that did mute some of the sounds of factory floor. Stepping through some offices, I then came upon the rear part of a Brompton frame being run through what I first thought was a CAT scanner, but I learned from the workers there that it was a precise measuring tool to make sure that any random piece plucked from the factory floor was exactly right. At least one of the workers recoiled in horror upon learning that I owned several folding bikes but that a Brompton was not one of them. I had begun wondering the same thing. 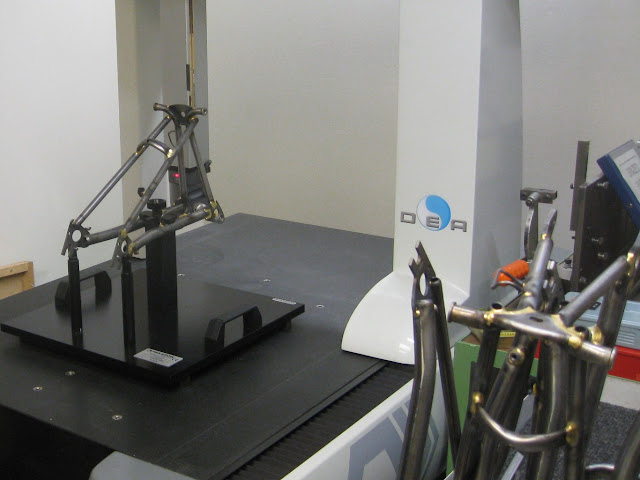 While passing out of that work area, I was shown the 'Rogue's Gallery' which is basically a glass-enclosed bookcase containing defective parts that had been collected from Bromptons over the years. At first glance, I didn't see much, if anything, wrong with some of the bits on the small bookcase and realized that considering the sheer number of bikes that flow from the factory year after year, there weren't a whole lot of defects. Still, if I worked there and had to walk by that bookcase every day, I'd be incentivized to build a bike right. 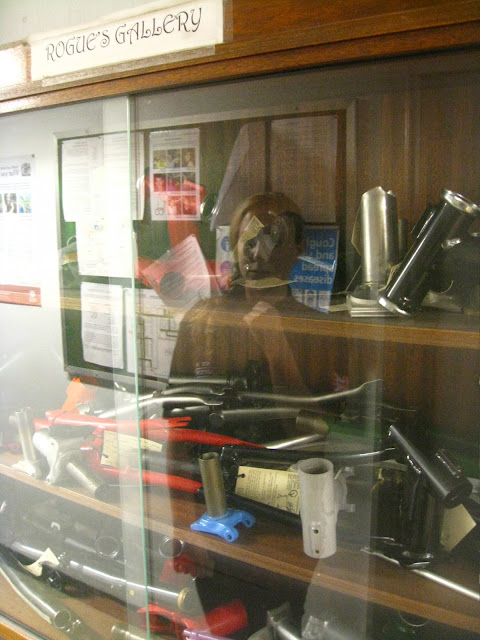 I saw yet another reminder of Brompton's commitment to detail a few minutes later, when we stepped into 'Factory B' which is the portion of the building where the painted parts (the bits are painted offsite and sent back to the factory for final assembly) were waiting for the next stage of the build.

“Are these ready to be assembled?” I asked, gesturing a wooden crate of pristine-looking red and black parts that had white circles of chalk drawn onto them.

“No,” said Hanna, showing me the label on the crate. “These are the defects that are not going to be used.”

It was here where I understood where a lot of the money goes when one buys a Brompton. The white circles weren't labels, they were drawing attention to whatever defect the part had, and in most cases it was a tiny pin hole or bubble in the paint finish that you'd simply lose in the finish if the white circle wasn't there. I'd imagine that 99.9% of Brompton buyers wouldn't notice it, but the employees do. 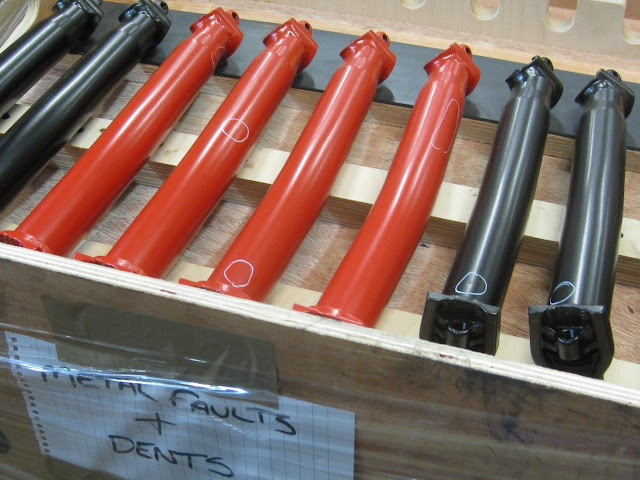 The parts that had made it through the brazing, the cleaning, the meticulous measuring, the offsite painting and had returned without defects were being made into recognizable bikes in this part of the building. And each one was telling a story: what kind of handlebars the buyer likes, how many speeds they felt they could live with in the internal hub and what color(s) they prefered. 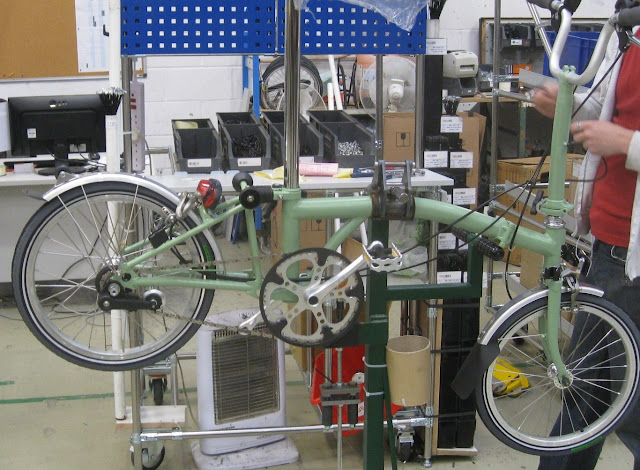 After walking past a few shelves containing Brompton bikes that were ready to be shipped, I saw an area of the building that looked like a cross between my dream workshop and miniaturized version of the warehouse from the end of Raiders of the Lost Ark. The building stocks parts from older models of Bromptons so they can ship a part when and where it is needed. 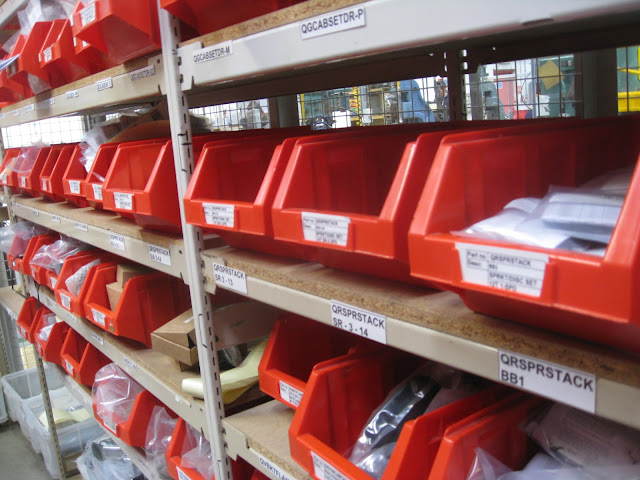 Though they aren't made at the place I was visiting, Hanna showed me the Brompton Oratory Jacket the company had released last year. I always have mixed emotions about companies that push into new product categories (Subway serving breakfast, Pizza Hut serving subs, Porsche building an ugly sports utility vehicle named after a pepper, and so forth) because I don't want said company to branch too far and lose their focus. But I am willing to give Brompton the benefit of the doubt, because whatever team designed this clearly didn't phone it in. 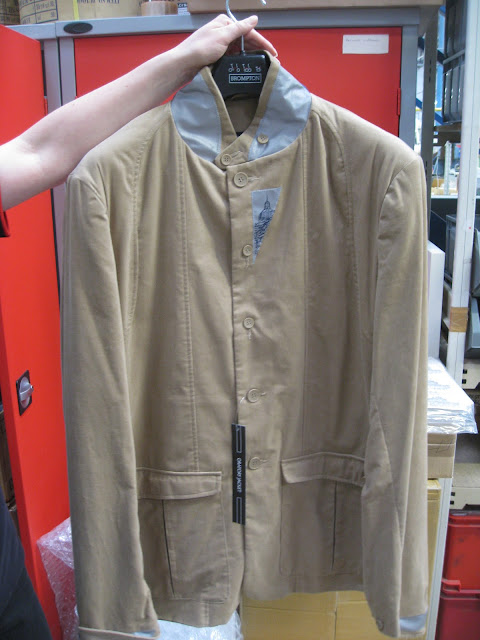 The exterior is weatherproof cotton and the interior is made from moisture-wicking bamboo. Zippered vents are hidden in the sides, and the shoulders are sewn in such a way that the jacket won't stretch or become uncomfortable when crouched over handlebars. Not only that but the jacket somehow understands the nuance between being seen and being noticed: When the collar is turned up it exposes reflective material, and in the back there's a retractable yellow flap that makes it easier to be seen by London cabs while you're pedalling home from a pub at night. 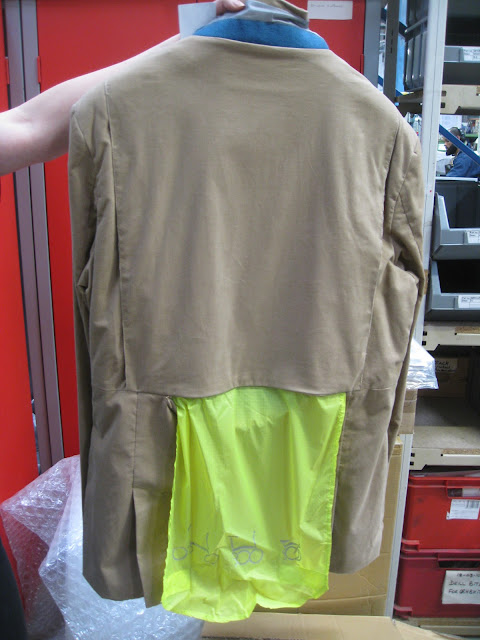 When the collar is turned down and the yellow flap is hidden, it no longer looks like cycling-specific attire but looks like the kind of jacket that would get noticed – possibly by women in the pub. Now I would wear disposable paper clothing if it was socially acceptable - but the truth is I haven't been this excited about men's cycling fashion since my last visit to Pacific Swim Bike Run. 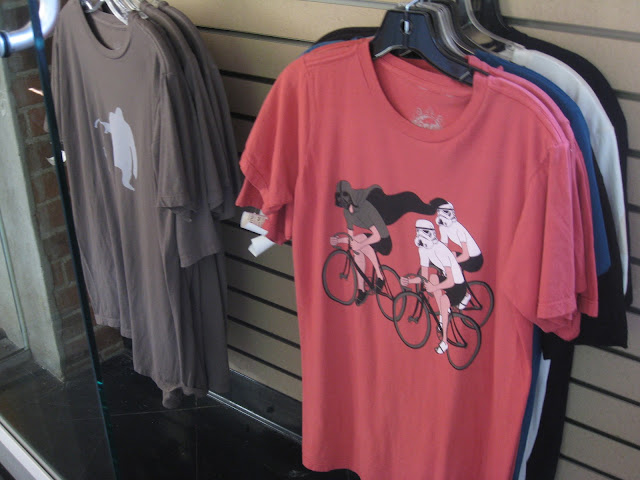 Before leaving the factory, I got to see some of the older models hanging in the stairwell by the entrance, along with a framed letter from Raleigh that was sent to the founder of Brompton, A.W. Ritchie in 1982, rejecting his design for a folding bike. It made me think of Stephen King impaling his rejection letters on a metal spike as well as a couple of my friends early in their writing careers hanging onto their rejection letters. The whole area just made me smile. 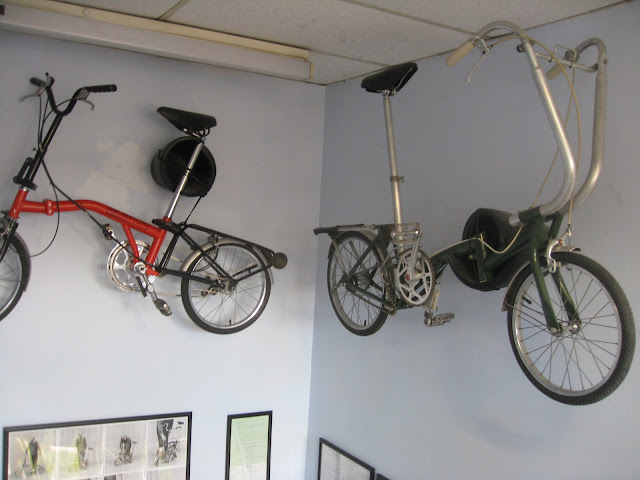 I walked past the Kew Bridge Steam Museum before catching a bus back to the hotel. As it sometimes – only sometimes – does in London, the rain began bucketing down from the sky. However, I was still able to make out the stores along the route, and as soon as I saw an unfamiliar bike shop I got off the bus. In the pouring rain and carrying my wimpy umbrella, I made my way to the store, went inside, and was immediately drawn to a display in the back. At that moment I was unsure of two things: whether I would look at a Brompton the same way again...and what the checked bag limit was for my flight.

Thanks for reading, and thanks for taking part in Folding Bike Week 2012. 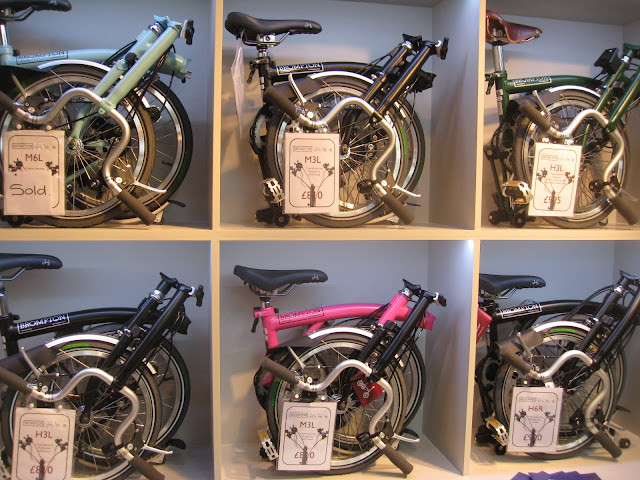