So Hurricane Sandy hit Stamford. Actually, we now seem to be calling it 'Superstorm' Sandy though there's nothing 'super about it. Hanging out with my cousins is super. My 92-year-old grandmother's coffee cake is super. I don't need to imagine an anthropomorphic hurricane wearing a cape.

I didn't have to imagine anything, but I had plenty of warning and plenty of time to prepare. I charged each and every one of my 12v Ryobi batteries so I could finally use the cheesy flashlights that come in the starter kits. I topped off three scooter batteries on a charger so my wife and I would be able to charge our cell phones when the power went out. Aided by a friend holding the ladder, I cleaned my gutters. I bought shelf-stable food and gallons of water. I gassed up the car – and once I discovered my street wasn't on the city's mandatory evacuation list, I left it at my office garage four miles away where it would be safe from falling tree limbs.

Of course, I also got an Aftermath Bike ready. Having donated the last one to Domus, I slightly modified the DiamondSchwinn to it would be Sandy-ready. 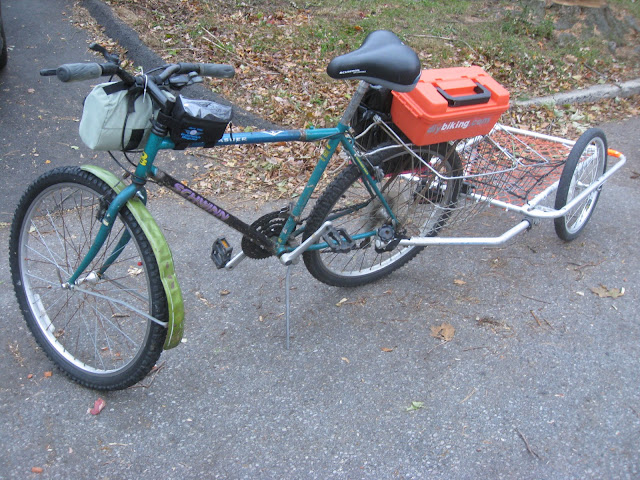 In the back, I added the metal wire baskets that came from the Raleigh Sports (what else would I have done with them?). In the front I added an old Cannondale bag to put tire-changing and inflating tools in. A fender that came from an old green Columbia frame that contributed to my now-famous DIYBIKING.COM Signature Coffee Table also went on the front. The whole bike was pretty heavy, but it has a ready-for-anything feel to it, and looked rather post-apocalyptic.

The storm arrived slowly, and close to high tide on Monday I walked four blocks to West Beach and walked on the path over the breakwater so I could see the tide coming in. In my rubber welding boots, I trudged through a few inches of water that had already settled on the parking lot to the edge of the beach. 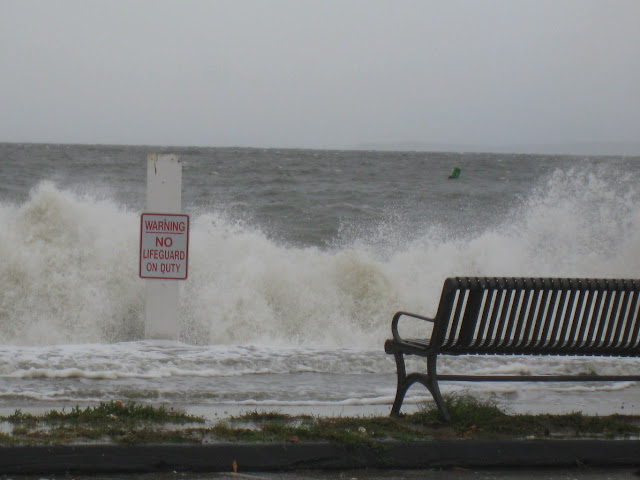 As the afternoon wore on, the wind got worse and the rain started. Lights began flickering around four. My wife and I pushed our luck by making dinner, and not twenty minutes after we were finished, the power winked out at 6:18pm. In minutes, the house had the warm glow of a few candles and some bright flashlights.

Being able to charge the phones meant we could tune in to Facebook more often to see pictures of waterskiing cats and the like, but also see that the governor of Connecticut, Dannel Malloy, was giving an address at 9:15. We tuned in to the little solar power and hand crank radio, and understood that we should stay in our homes but listen to local evacuation orders. The wind was pretty loud and slightly shaking the house at this point, but we pretty much shrugged. Our place was built 15 years before the Hurricane of '38 and, confident it would stay standing, we headed off to bed.

And hour later, the police showed up in the neighborhood, flashing lights and loudspeakers, indicating we were under a mandatory evacuation order as they feared the high tide at midnight would breach the breakwater. I thought a moment and decided it would be incredibly stupid to head outside in the middle of a hurricane to flag down a radio car and get a ride to a shelter we'd be unable to leave when we wanted (we found out minutes later, online, that the shelter the police intended to take us to had closed since it had reached capacity). Choosing the 'mildly idiotic' option, we ignored the evacuation order.

I was confident the breakwater wouldn't be breached – but peeked out the front door from time to time to see if Long Island Sound was creeping up the road. I also headed into the basement with a flashlight to make sure there was no water there, and there wasn't.

It was mostly a sleepless night, but around 4:00am, the wind finally began to stop. While waiting for the sun to come up, I made coffee. Now I know I've advised in the Essential Guide to Surviving Hurricane Irene that you need to keep Starbucks Via in the house in the event of a power outage, but if you have a gas stove and the gas line is still functional, you can boil water. And if you have a drip coffeemaker, you can open the top and slowly pour in the hot water. As you may have guessed, I had Fairway grind the beans for me this time. 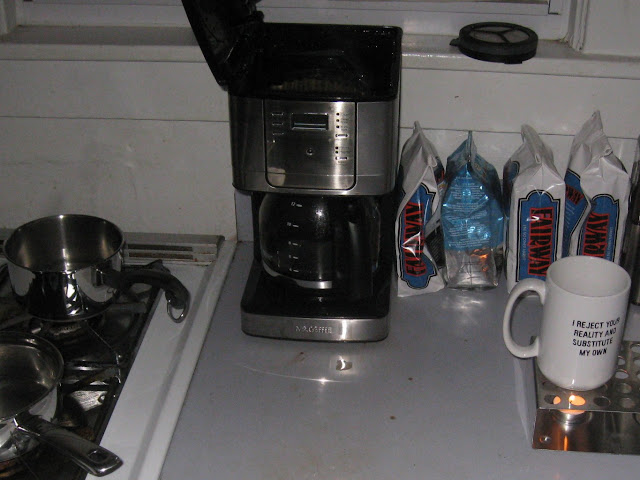 When I had my fill of coffee and pan-warmed bread, I hopped on the DiamondSchwinn and headed to West Beach. The debris line was only about two feet up the breakwater. I let out a 'whew' even though I was still struck by the amount of damage. 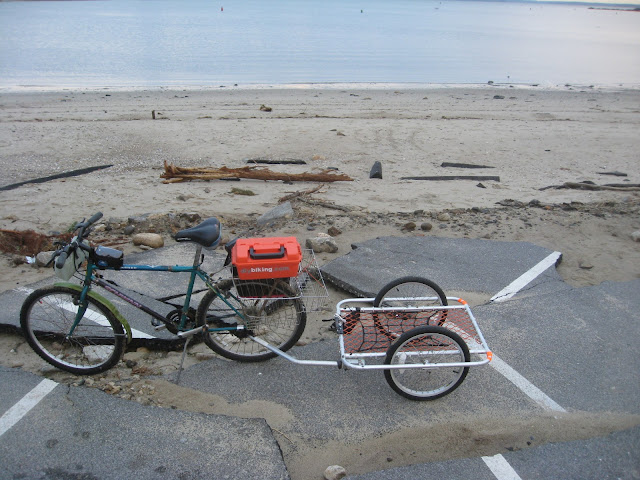 What makes that picture interesting is that just a few weeks earlier I had taken a picture near the same spot of a bike I had just bought at a tag sale: it was a vintage Schwinn Worldsport. It was in great shape but I added $50 in tires since the ones it was on were rotted from disuse. It was such a nice bike I almost didn't want to get rid of it...but here it is leaning against a park bench that is either broken apart or trapped under the foot of sand covering the West Beach parking lot at this very moment. 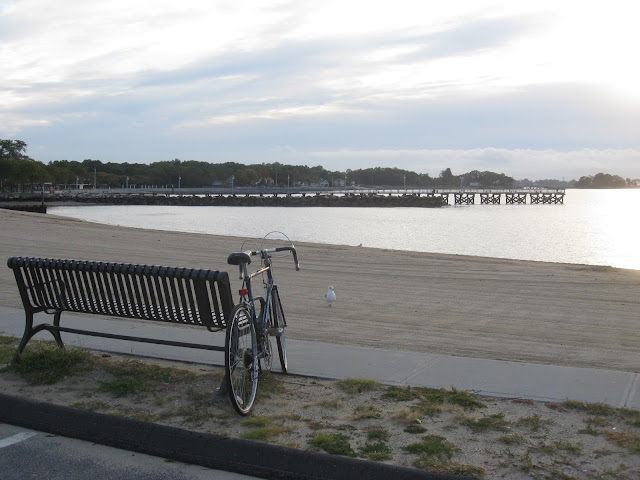 That bike is hanging in my basement right now even though I wish it was in Brooklyn where it's needed. For my non-east coast readers, Brooklyn and all of New York City was hit badly, with public transportation severely crippled and pushing more cars on the road, making a bad situation even worse.
Mayor Bloomberg even forced a three-passenger minimum for some of the bridges because the gridlock was just too much.

Now I had tried to deal with the problem weeks before it occurred by bringing the Schwinn to Brooklyn so I could sell it. A bike shop that had expressed interest earlier in the fall had now given me a lowball offer (that wouldn't cover what I put in to the bike) so I decided to see if the people of Brooklyn would do better. However, I needed a way to advertise the bike the day I was in Brooklyn and also have a way to get back if I sold it – so I couldn't ride the Schwinn. However, a very slight modification to the Mystery of South Norwalk solved my problem. 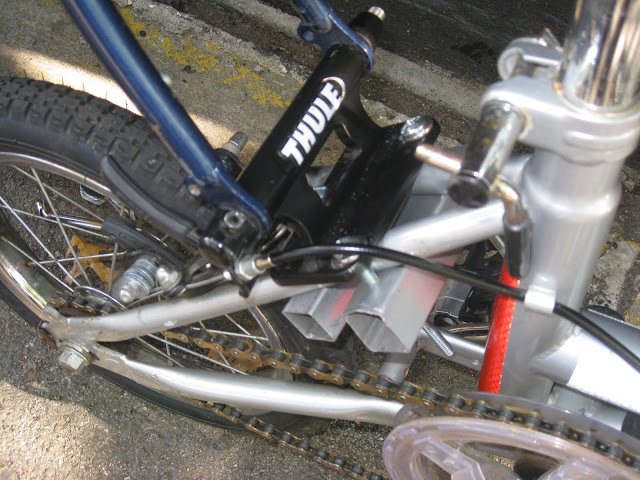 A Thule fork clamp I bought for $1 at a tag sale over the summer bolted to the seat stays. That's all this is. No other modifications. When I attached the Schwinn, I got this. 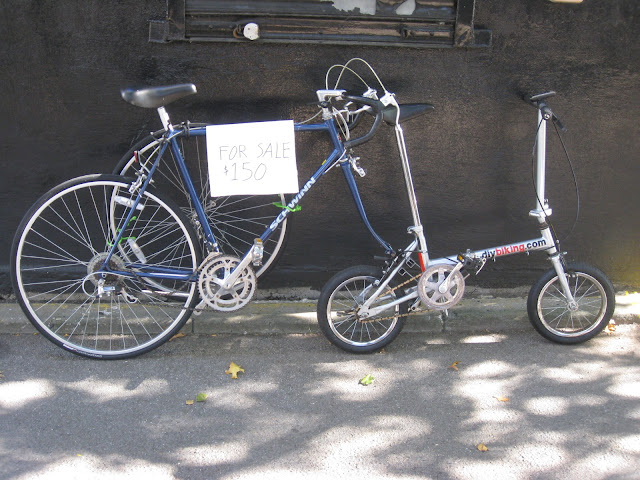 As you can see, South Norwalk's low and unusually sized rear tire comes in useful since the Schwinn looks almost perfectly positioned. There's just enough room for me to sit on the little folder without the handlebars of the towed bike to interfere. I priced the bike competitively, attached my 'For Sale' sign, tied the front tire of the Schwinn to the frame, and pedaled around Brooklyn.

Seven miles, I went. I tried selling it to women hailing cabs. I pitched it to a group of men talking on a corner (one wanted to buy South Norwalk; and of course that was no deal). A guy outside a bike shop looked at it very closely but decided he didn't want it.

I have the feeling that if I were to return to Brooklyn with the Schwinn, I'd return to Stamford without it. I could even try my luck, here. A lot of gas stations lost electricity (some have taken to siphoning gas out of the tanks to fill red cans so people can run their generators) and when I took a bike ride this morning, I saw gas lines.

That ride this morning also showed me that four days after the storm, there were not only still a lot of people still without power, but a lot of things in places where things should not be. 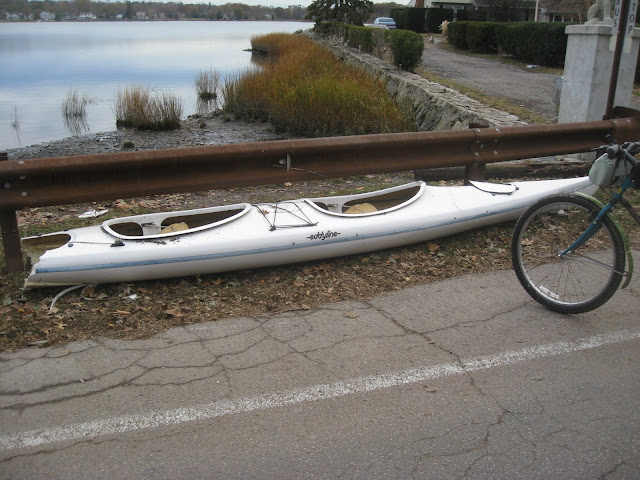 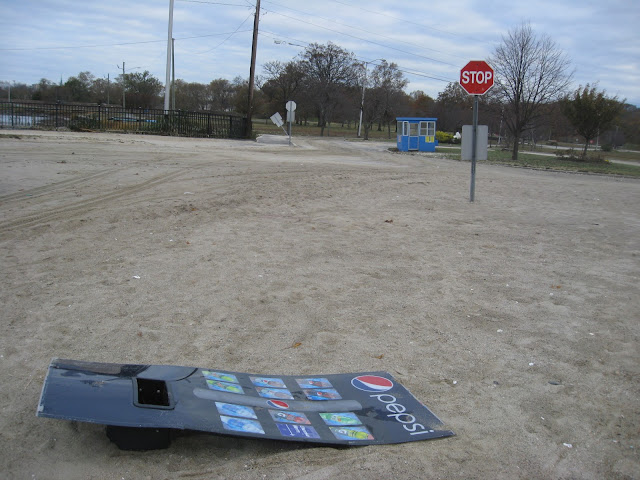 Just like looking at pictures of cars seemingly welded together on bridges going into Manhattan changed my perspective on the Schwinn Worldsport, this morning's ride – which was to Caffeine in South Norwalk and back again on the Aftermath Bike – changed my perspective on perspective. I heard generators everywhere. Saw black hoses still snaking out of basement windows. Dumpster after Dumpster after Dumpster parked in front of houses that weren't protected by a breakwater. Some of my favorite markets and shops are still closed, while others (like Espresso Neat and Nicholas Roberts' wine shop) are open, but in darkness and 'cash only' transactions. I've also heard from Domus that a lot of families aretaking a financial hit from the storm (having to throw out a refridgerator full of food and buy flashlight batteries just as you've saved money to go holiday shopping isn't fun).

So I urge you to avoid the gas lines and ride a bike to help a neighbor or buy something from a local business this weekend. Also: sell a bike to someone in New York City and resist the urge to price-gouge. Thanks for riding and thanks for reading. 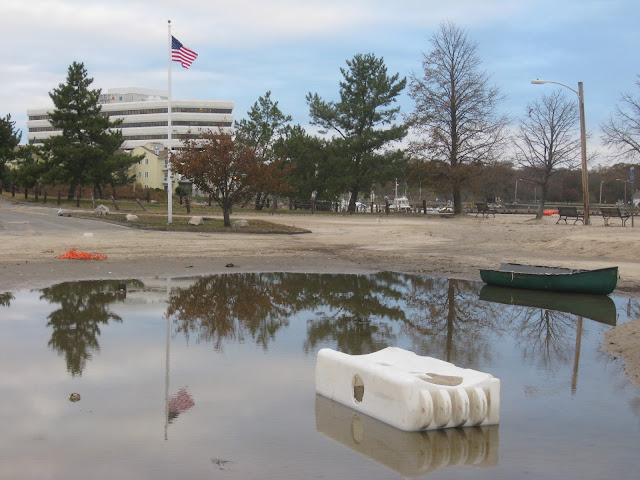