(A Roundabout Way of) Making a Portable Bike Rack

This week was unusual for many reasons. Some of which I will get into later, but one of the bigger highlights was my participation in Ignite Stamford #5. The premise of Ignite Stamford is to gather several people who give a short presentation featuring 20 slides that auto-advance every 15 seconds. It's very much like scripted ad-libbing, since you create the slides yourself but you have to be on your toes throughout.

I talked about welding, and one of the features of that activity I highlighted was the fact that if I wanted to put anything on wheels in my house, it's going to have wheels on it. One day I was in my shop and realized that I had four massive casters that weren't attached to anything. 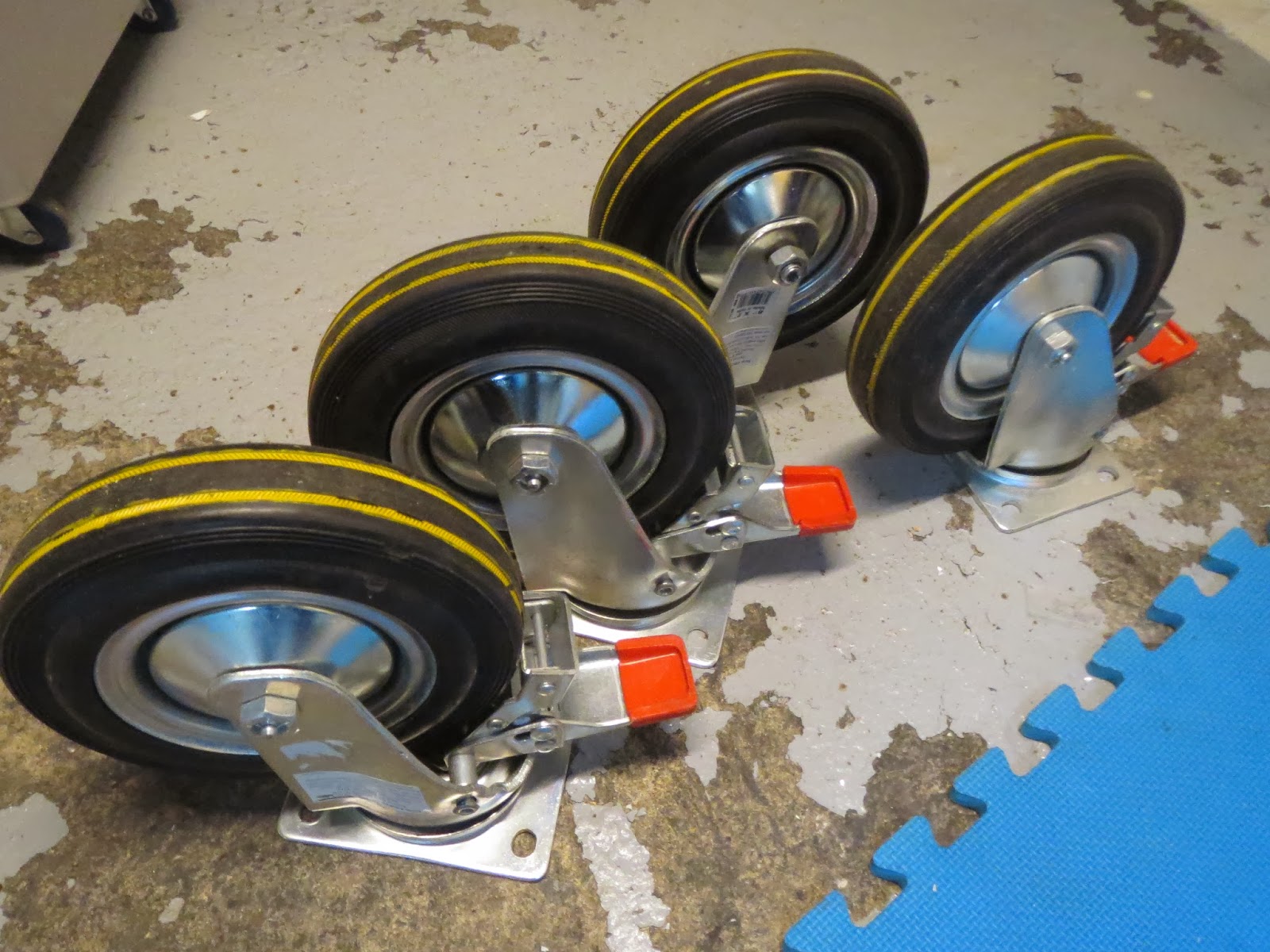 A sensible man would have put the wheels away until he knew what he was going to do with them. But you know me better than that. 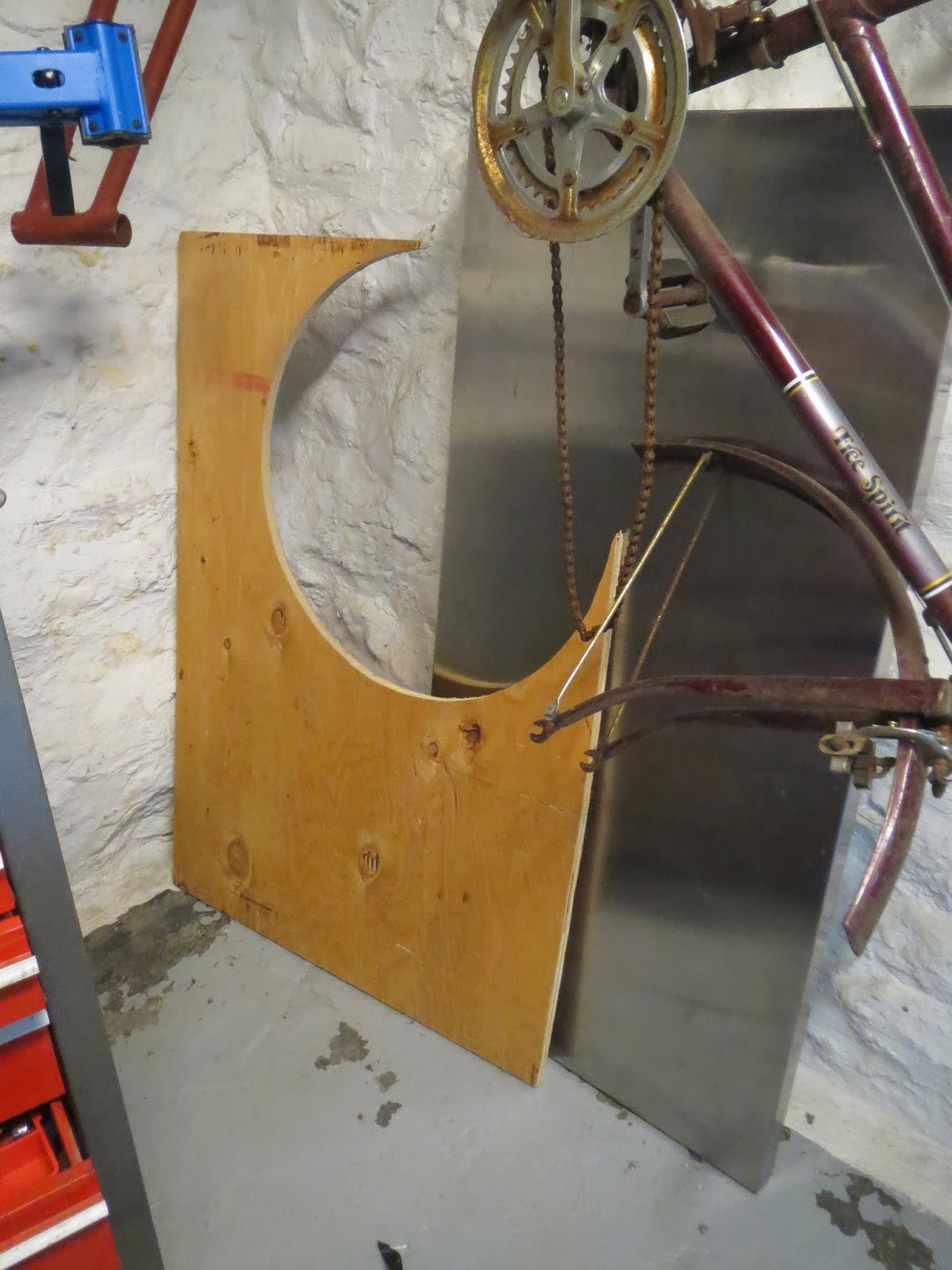 A glance to the corner of the welding room showed me a big piece of 3/4" plywood that was leftover from a project I had made for my grandmother (which was a series of wooden discs screwed together and covered with carpet so her living room chair could sit on it and be at a more comfortable height). It was hanging around in the shop for more than a year, but at that moment I was compelled to cut it exactly so. 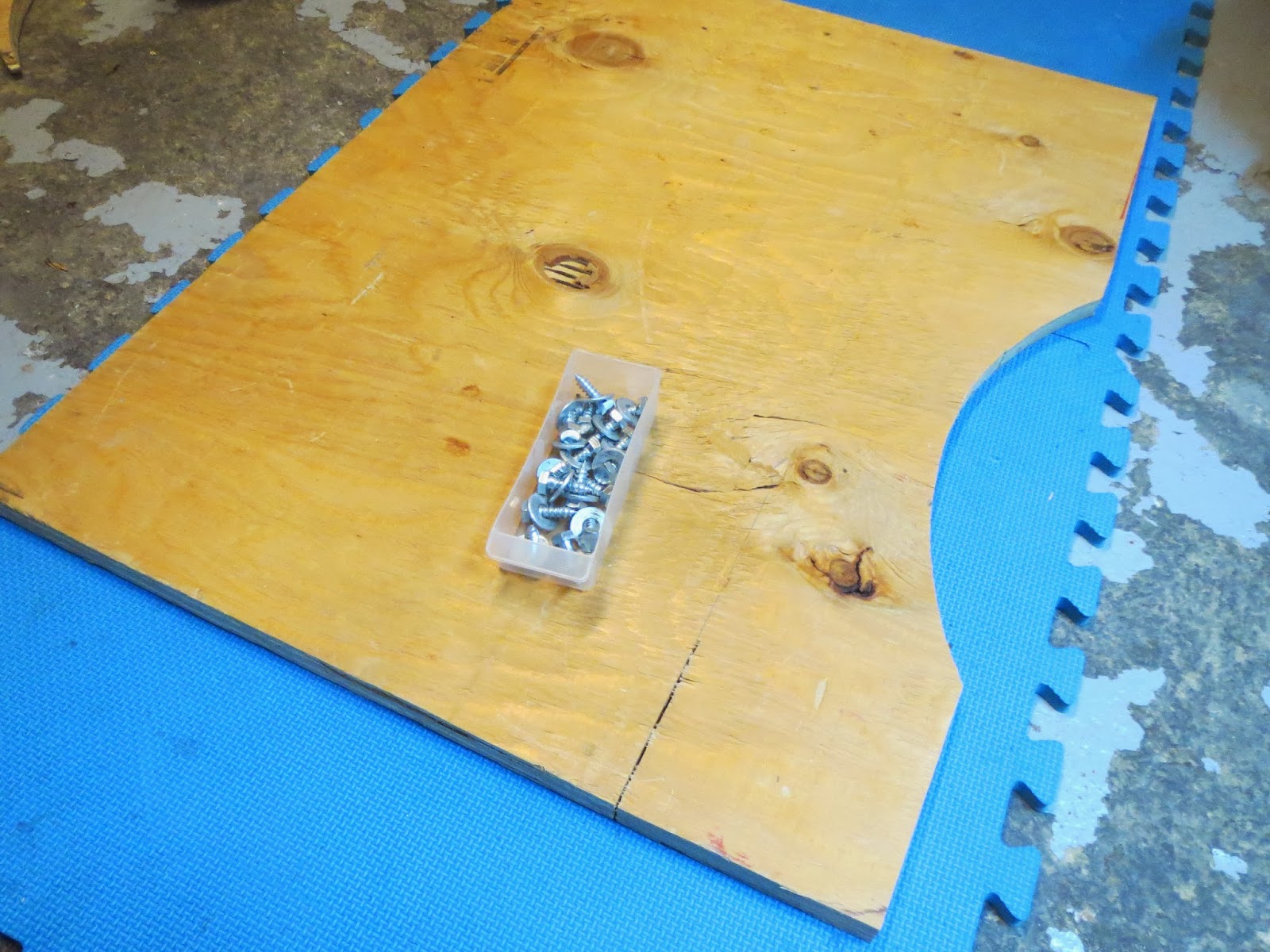 Next, I found myself a square piece of wood that was leftover from the one-sheet workbench project I made (it was one of the pieces that traveled six miles on the back of my homemade cargo bike) and attached a telescoping speaker stand to the center. 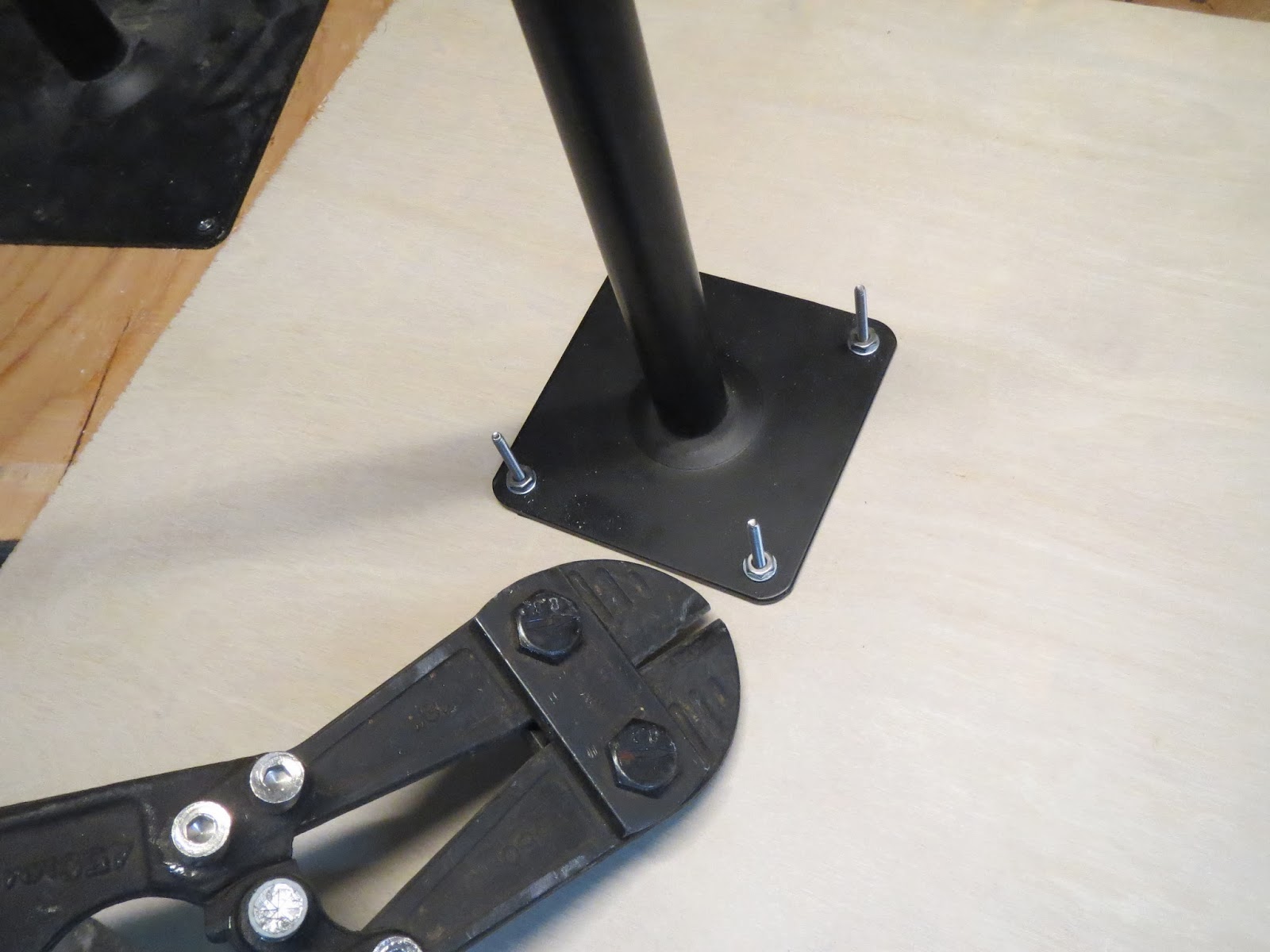 Before I put the two halves of the speaker stand back together, I dropped a spring in the bottom so in case the little thumb screw failed and the thing fell, the landing would be cushioned. 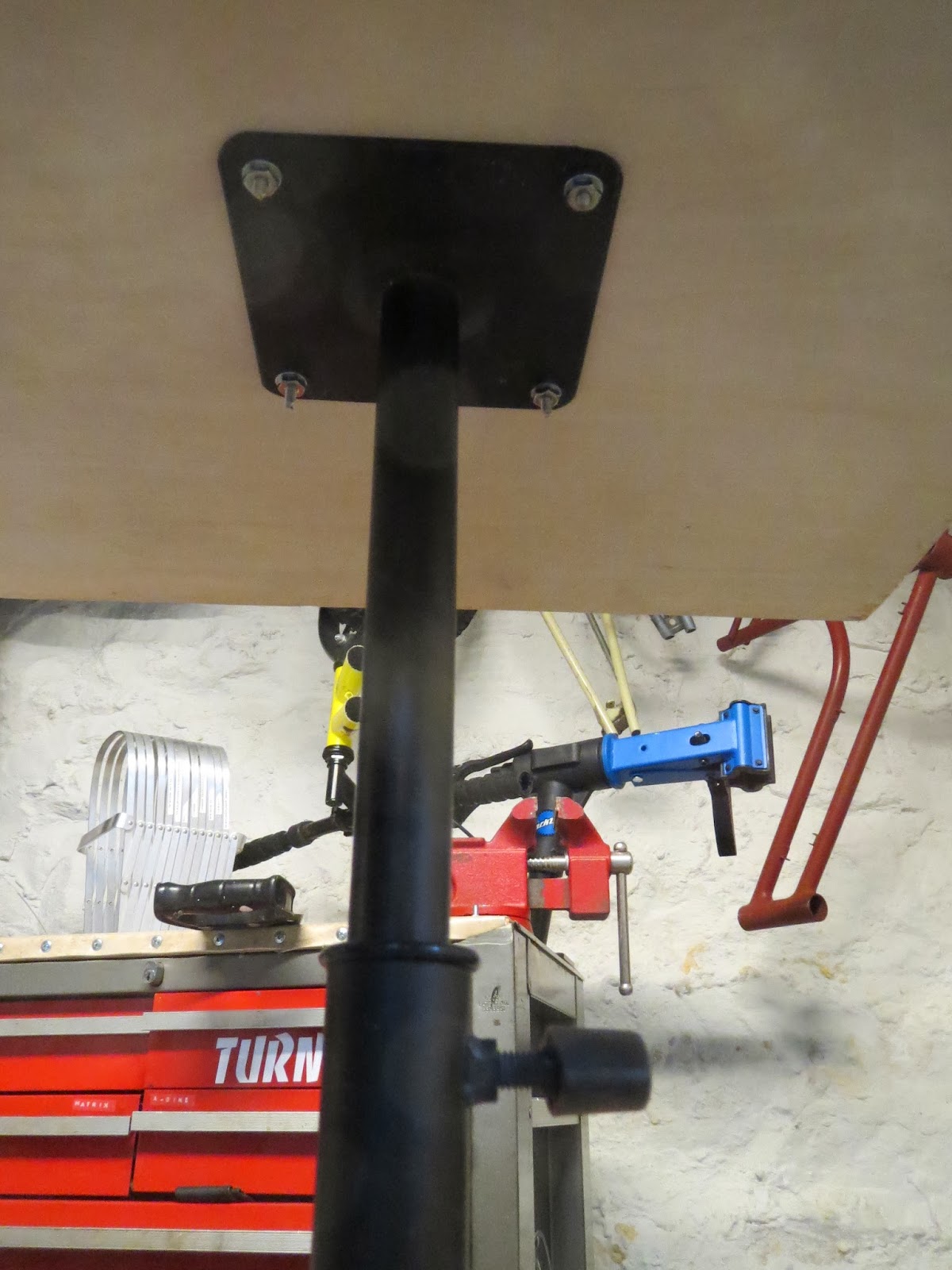 When I was done, I had myself the perfect rolling laptop stand. 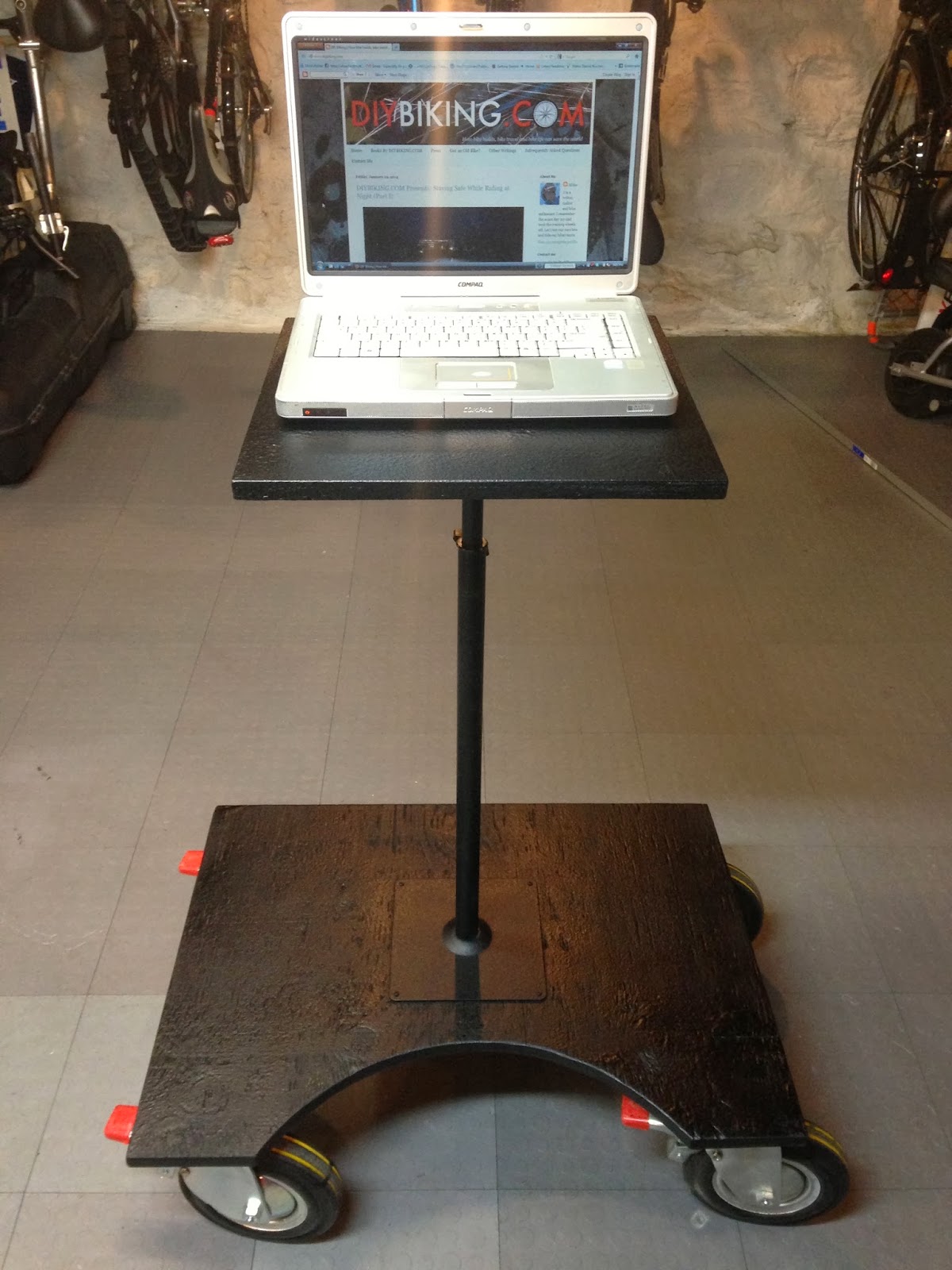 As you can see I ended up reshaping the bottom with a jigsaw and painting the whole thing black to make it look nice. It was perfect, I thought: very heavy at the bottom so it would be impossible to flip over, it could be lowered to desk height, I could sit on a barstool and rest my feet on the base if I wanted, and it looked pretty good.

But then the next morning I found myself with a lot of post-build remorse; the workshop equivalent of looking at the person you met at a party last night early the next morning and recoiling at what you had done in between.

What was I thinking? I already have a portable rolling table made from a tag sale find, and casters heavy duty enough to support the weight of a Smart Car are completely unnecessary for a four pound laptop. Not only that, it was too big, heavy and awkward to carry up stairs.

Luckily, a few weeks later, I was able to convert this ridiculous build into something useful. Or, at least, more useful than a massive rolling laptop stand.

It all started when I was sorting through a tub filled with metal bits in the welding room and came across this gem which, as you may recall, I found on a bike ride to New Canaan nearly three years ago. 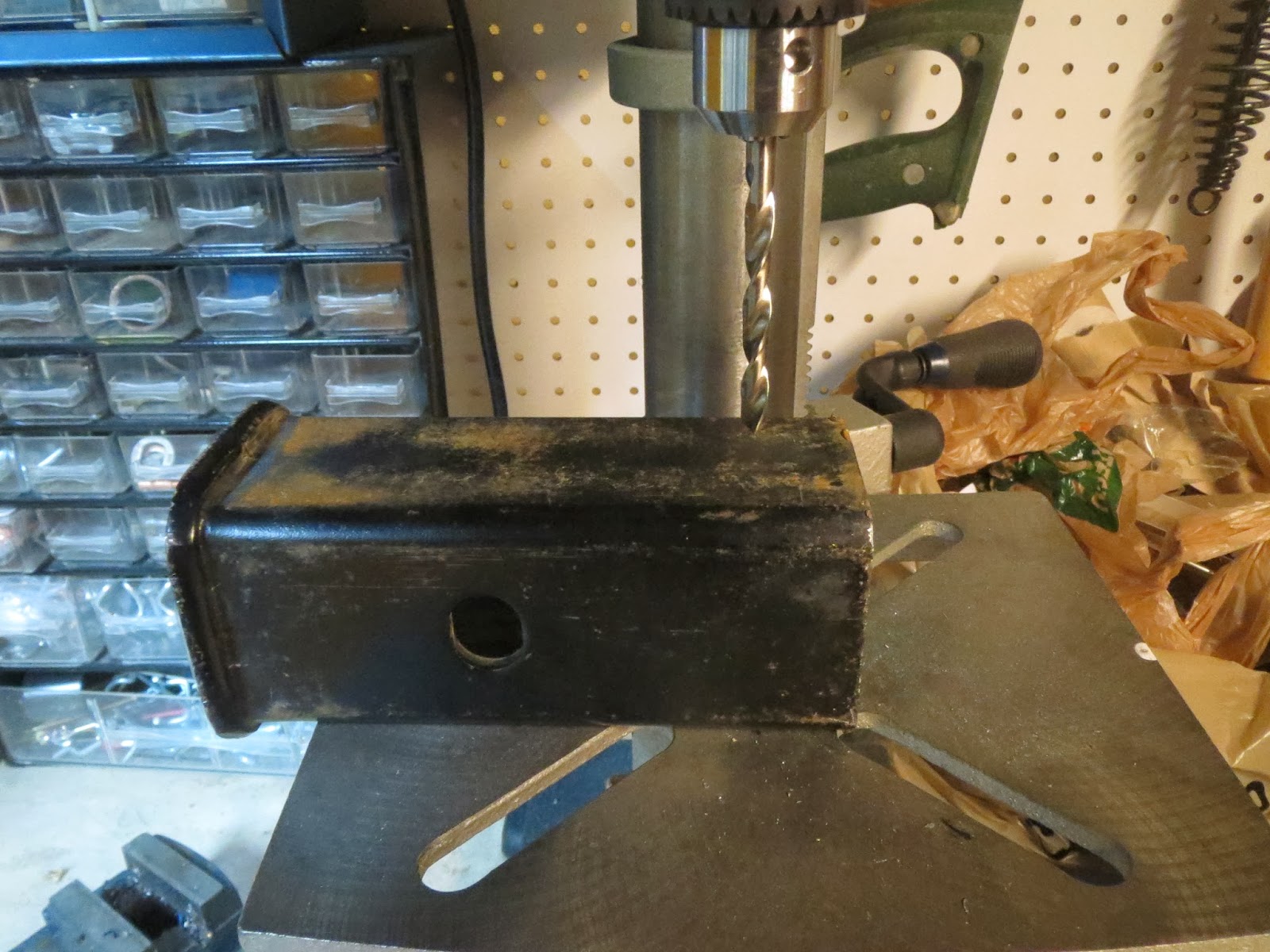 Yes, it's the back of a trailer hitch, and I fit it in my bike bag and carried this heavy chunk of steel with me for the rest of the ride.

It's where you and I differ. I know.

The first thing I did was cut a beefy L-bracket and make heavy duty metal tabs that could fit on the sides. 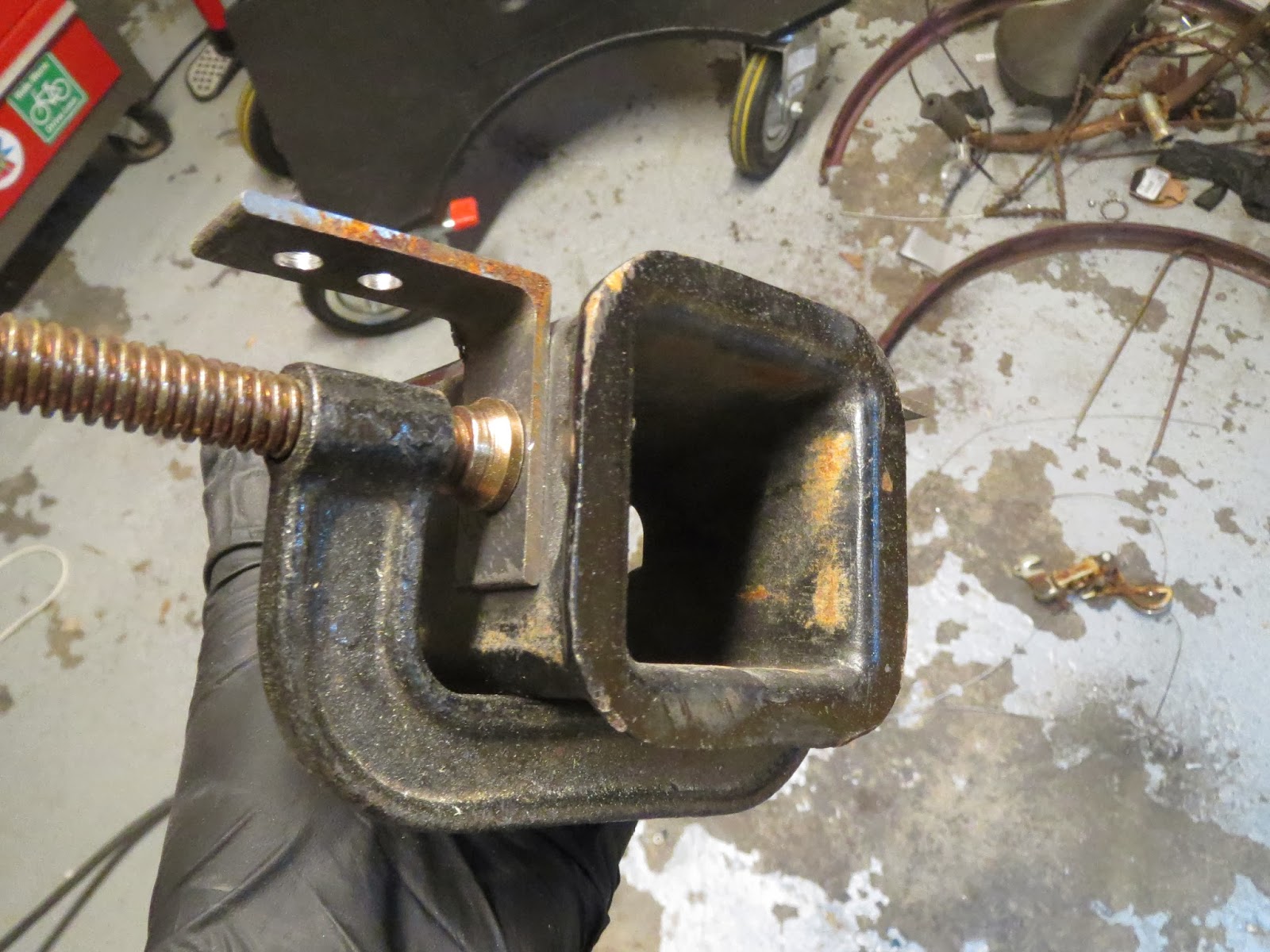 Then I did a little welding - some of the neatest beads I ever made, in fact - because I was using the proper welding tip (more on that later). 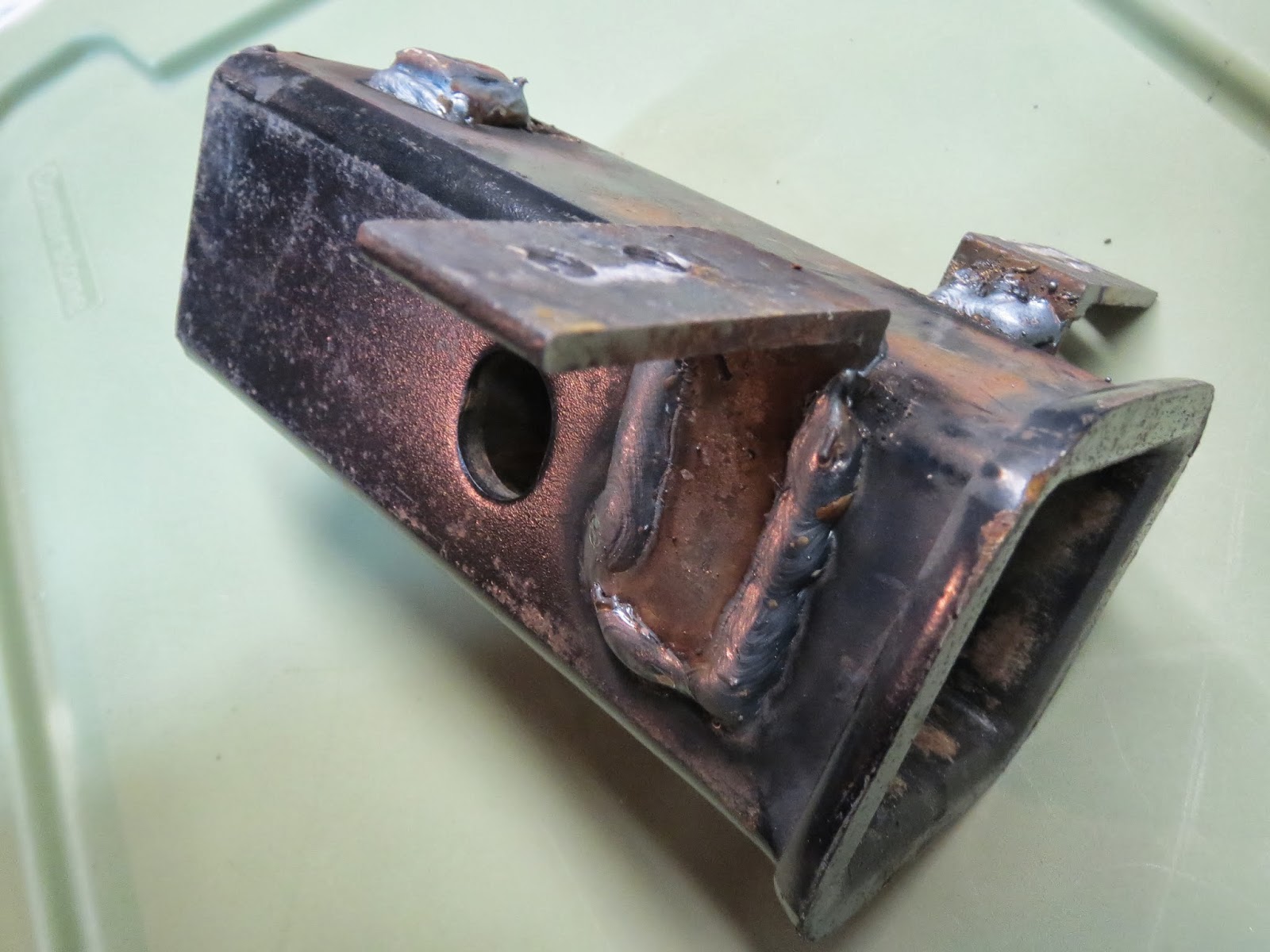 Next I removed the speaker stand from the base - I practically needed a spotter to help me flip the thing over - so I could center and attach it properly to the bottom. 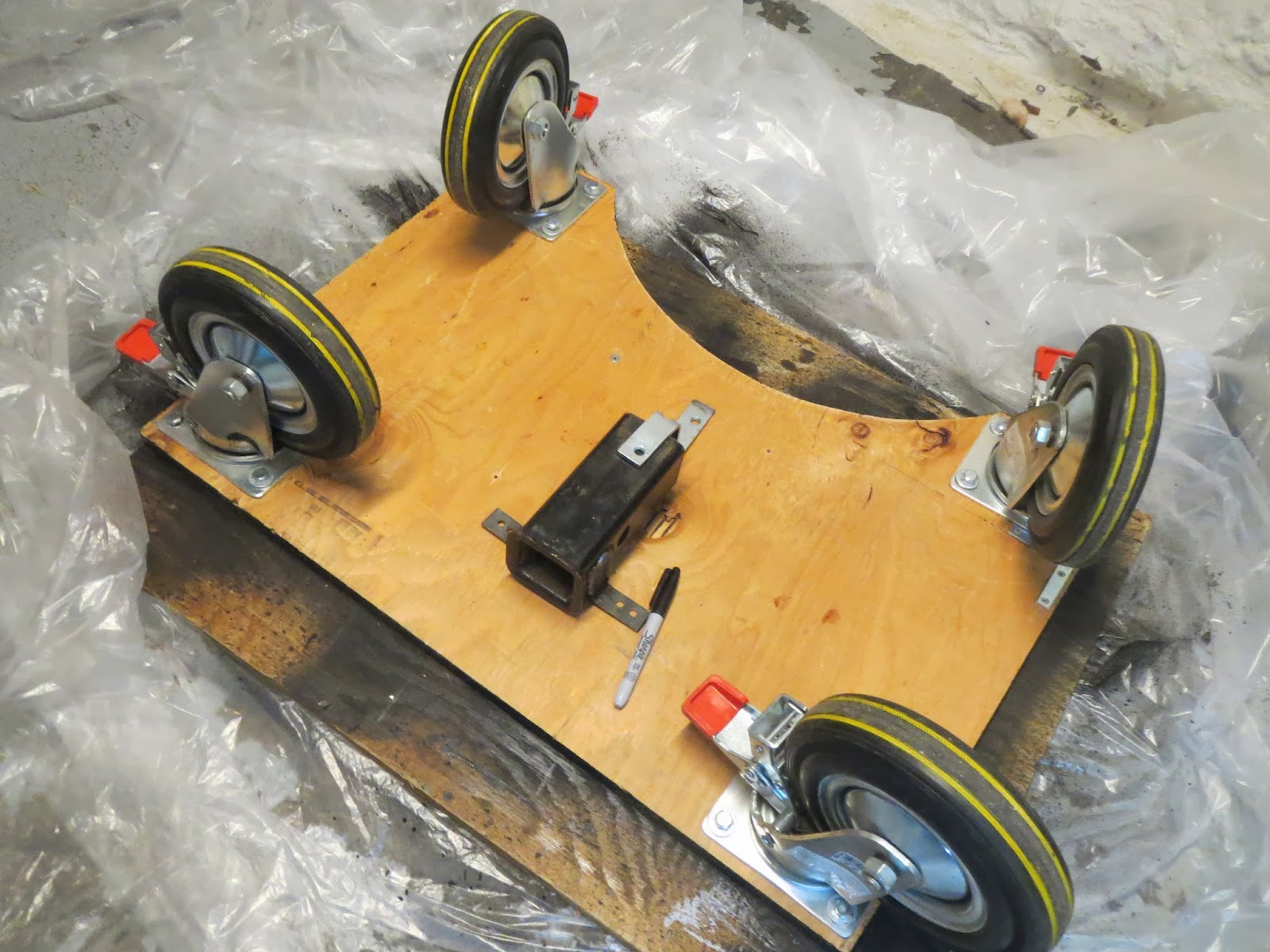 As I did this, I played around with an old Rhode Gear trailer hitch bike rack I have and never use (thanks to the interior bike rack I made for my Honda Element) to make sure everything would fit the way I thought it would fit. 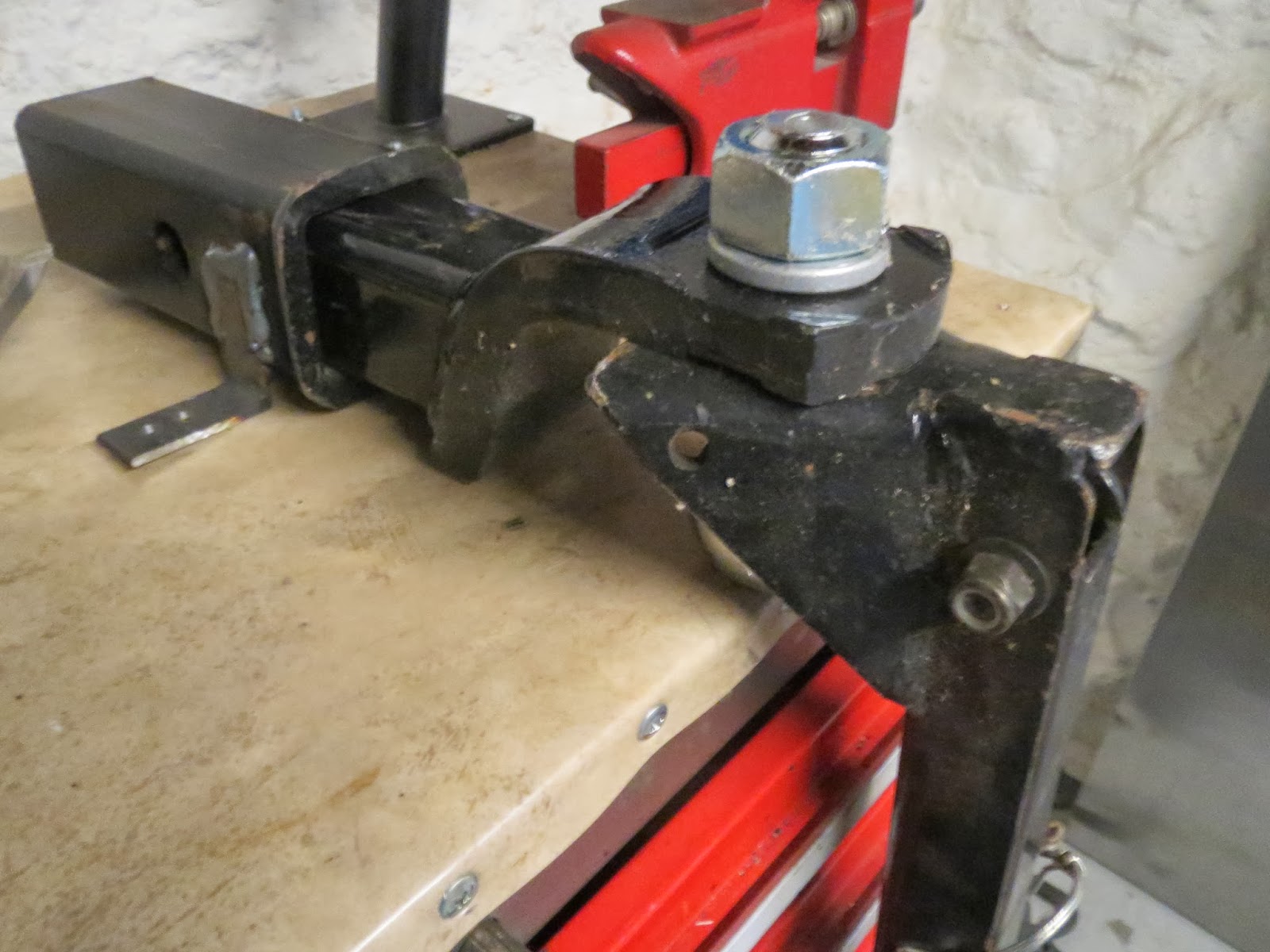 When I had my found piece of metal bolted to the bottom, I summoned up my adrenaline glands and flipped the base back over so I could put the hitch rack into place. 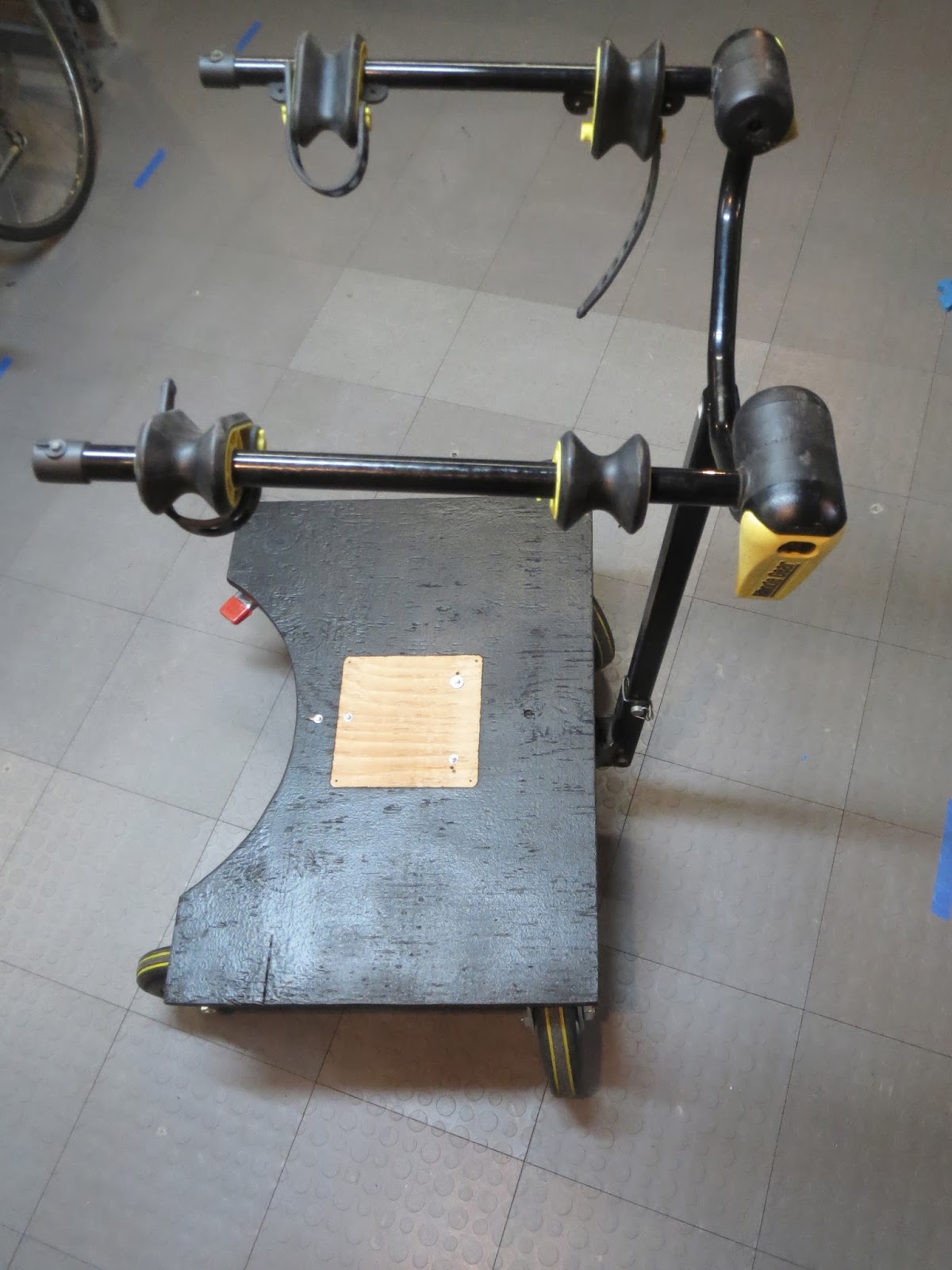 Yeah, this is more useful: I have a few more bikes than normal these days (don't ask) and it's more important for me to have bikes on a rack I can roll out of the way anytime than it is for me to stand at a computer while watching 'Breaking Bad' with commentary on DVD. 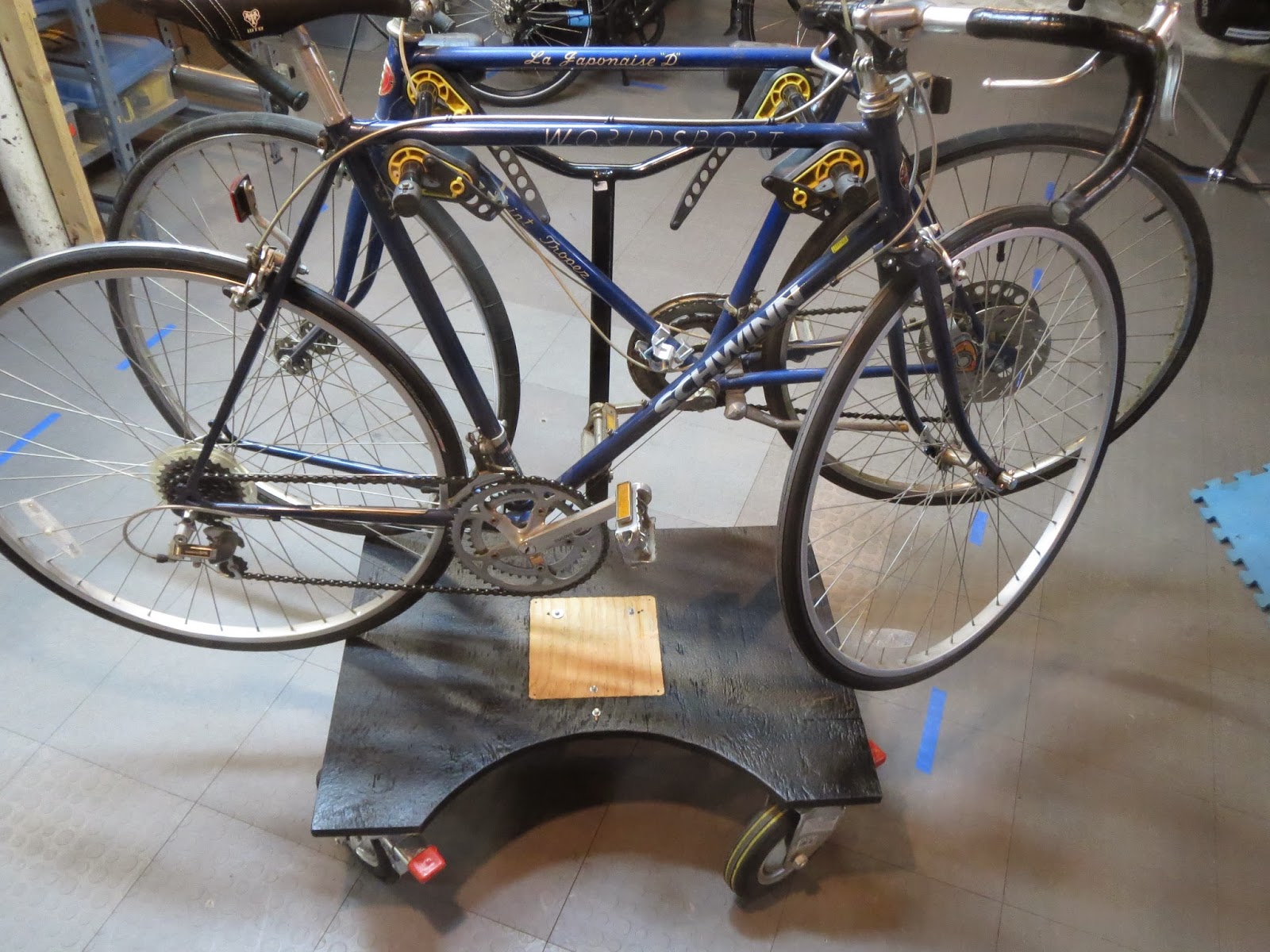 So the build - or rather, use of the casters - was salvaged for now and I was again reminded to never, every throw anything away. I picked up that trailer hitch bit in 2011 because I knew it would be useful someday, and it was. I can use the Rhode Gear trailer hitch that was otherwise being unused…and I didn't have to modify it in any way. And finally: inspiration for what you make tomorrow could come from something you made yesterday - even if you have post-build remorse. Thanks for reading and thanks for riding. 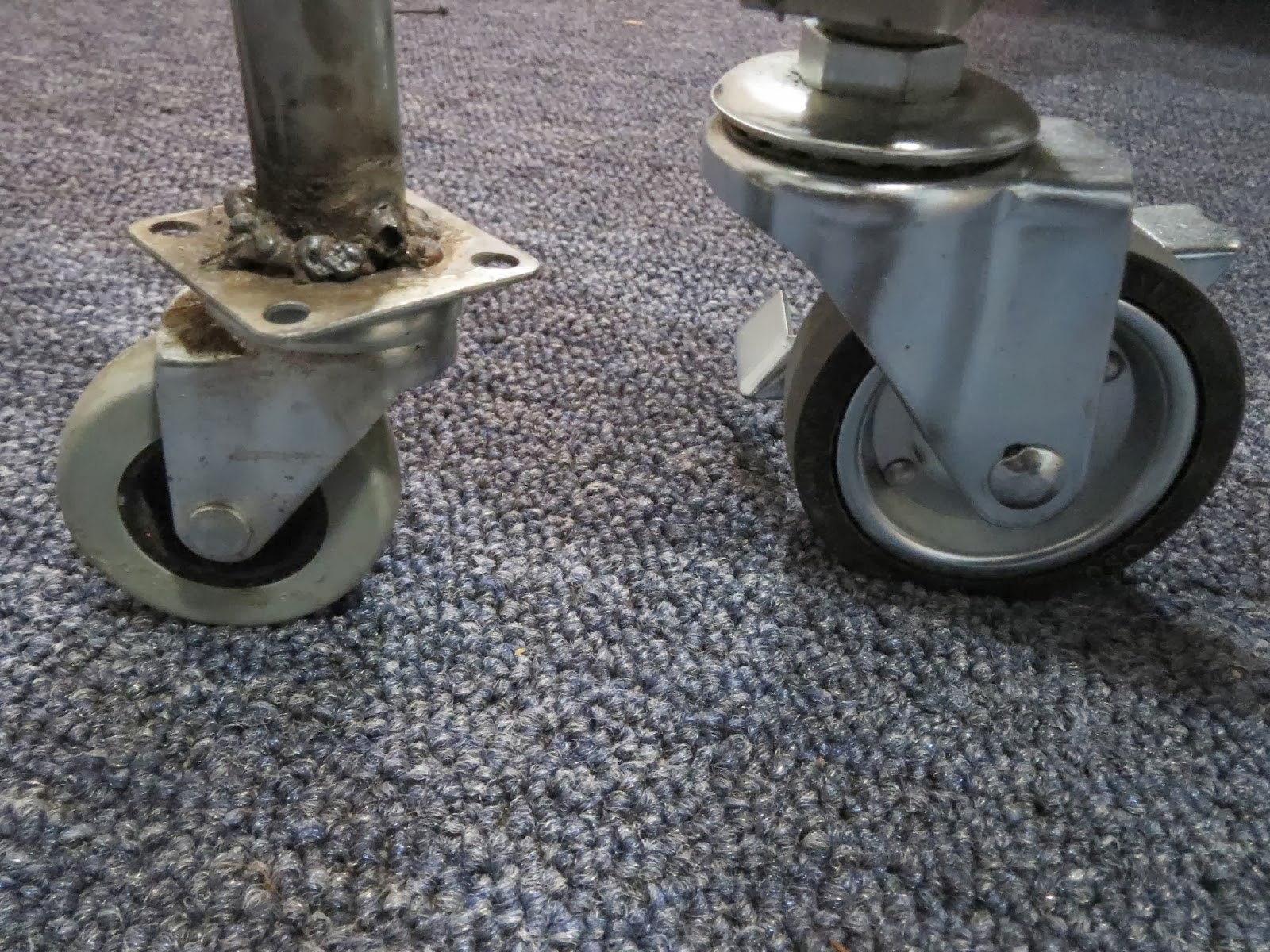