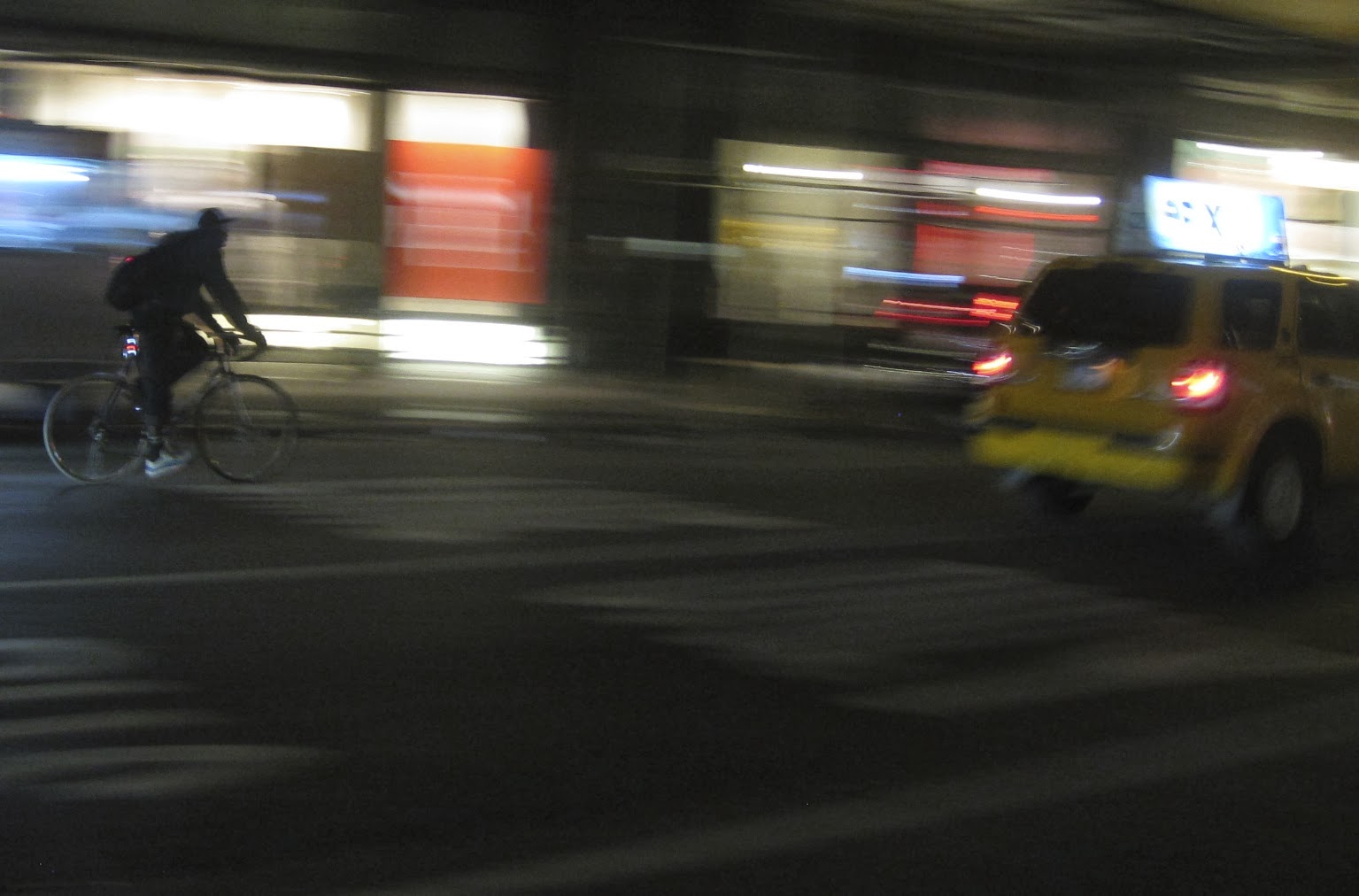 Today we continue DIYBIKING.COM's series on staying safe while riding at night by studying yet another reason why being seen as soon as possible is important.

The answer involves math. But first, let's look at the human brain. We need it to get to the math part. And to do the math part, now that I think about it.

For this segment, I want you to imagine that your eyes, brain and legs are being portrayed by actors. Because this is my site and I am the casting director,  Michael Cera of Arrested Development fame will be playing the role of the eyes, the brain will be portrayed by Oscar-nominee Jonah Hill, while the part of the legs will be filled by Christopher Mintz-Plasse.

If it helps with the visualization: all three of these guys starred together in one of the best comedies of all time: Superbad. Please proceed to your nearest FYE and buy it on DVD. Or Blu-Ray, if you feel like counting pores. Now even though I consider fan fiction to be the non-alcoholic beer of literature, I here present a short play featuring the characters each of these three played on Superbad. All three of them are in the front seat of a moving car wearing plain T-shirts featuring their body part names (eyes, brain, legs):

EYES: Dude, what is that?

BRAIN: Take your foot off the gas and hit the brake, (expletive)!

LEGS:  I am McLovin!

That entire exchange between the eyes, brain and legs takes about one second if a driver is not distracted.

When you're in a moving car, a second is a very long time. If you're going 25 miles an hour, you're moving about 36.6 feet per second.  So while your eyes, brain and legs are having their little discussion, the car is still moving.

The period of time when that exchange takes place is known as the 'reaction distance.' I first learned about all of this, believe it or not, in an educational Disney cartoon featuring Goofy that was produced in the 1960s which I watched sometime in the 1980s.  A series of Google searches found it and I couldn't believe how much of 'Freewayphobia' I remembered. 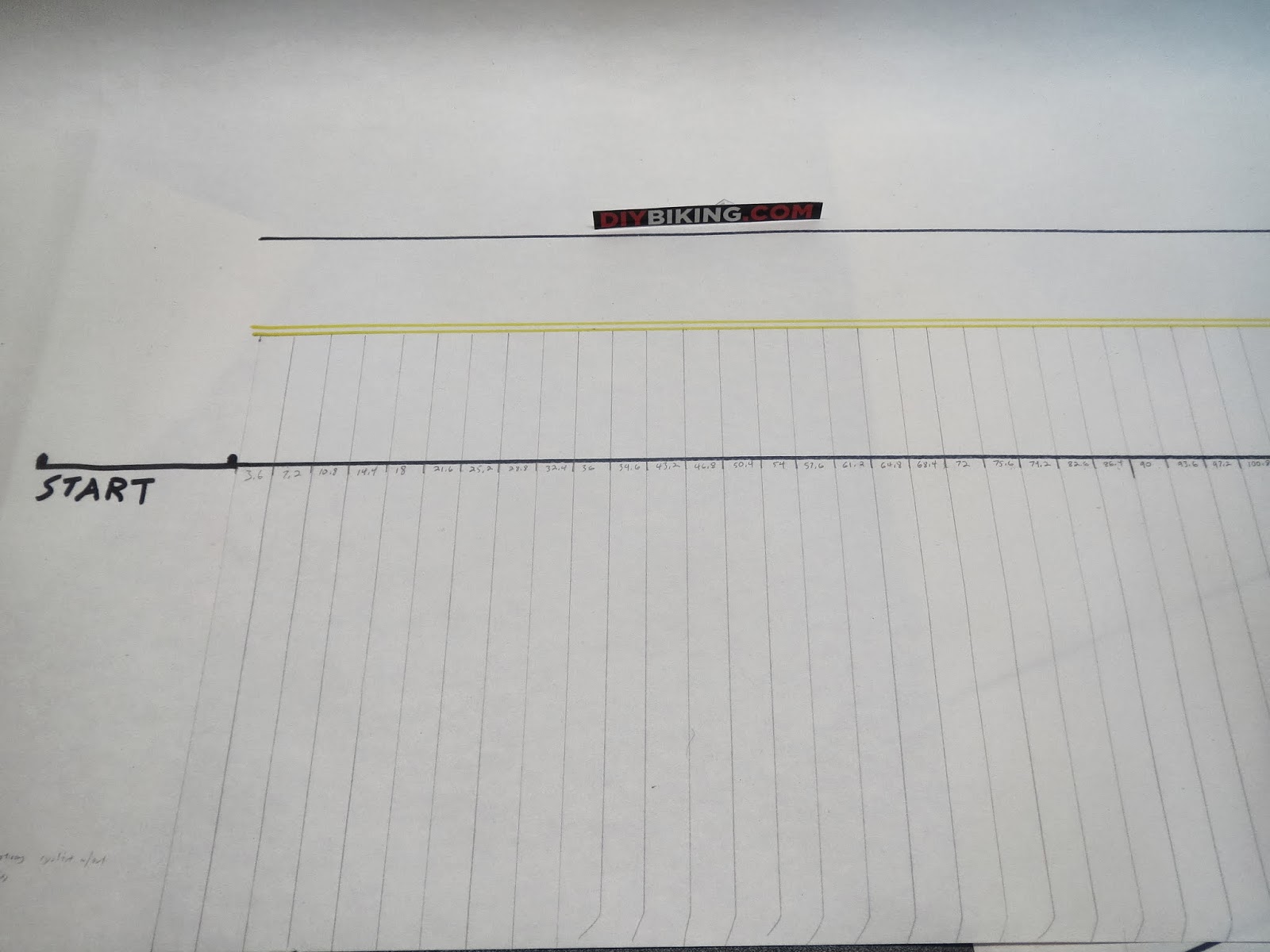 Stuck indoors thanks to this snowy nonsense, I set to work with the miniatures. The first thing I needed to do was build a 1:87 scale model road and mark distances with it.

Next, I placed a cyclist - the same one featured in my eventually-to-be-published children's book - about 71 feet away from the start line, which was a match for the distance I found I could see a cyclist with no reflectors and no bright clothing in the full scale experiment. 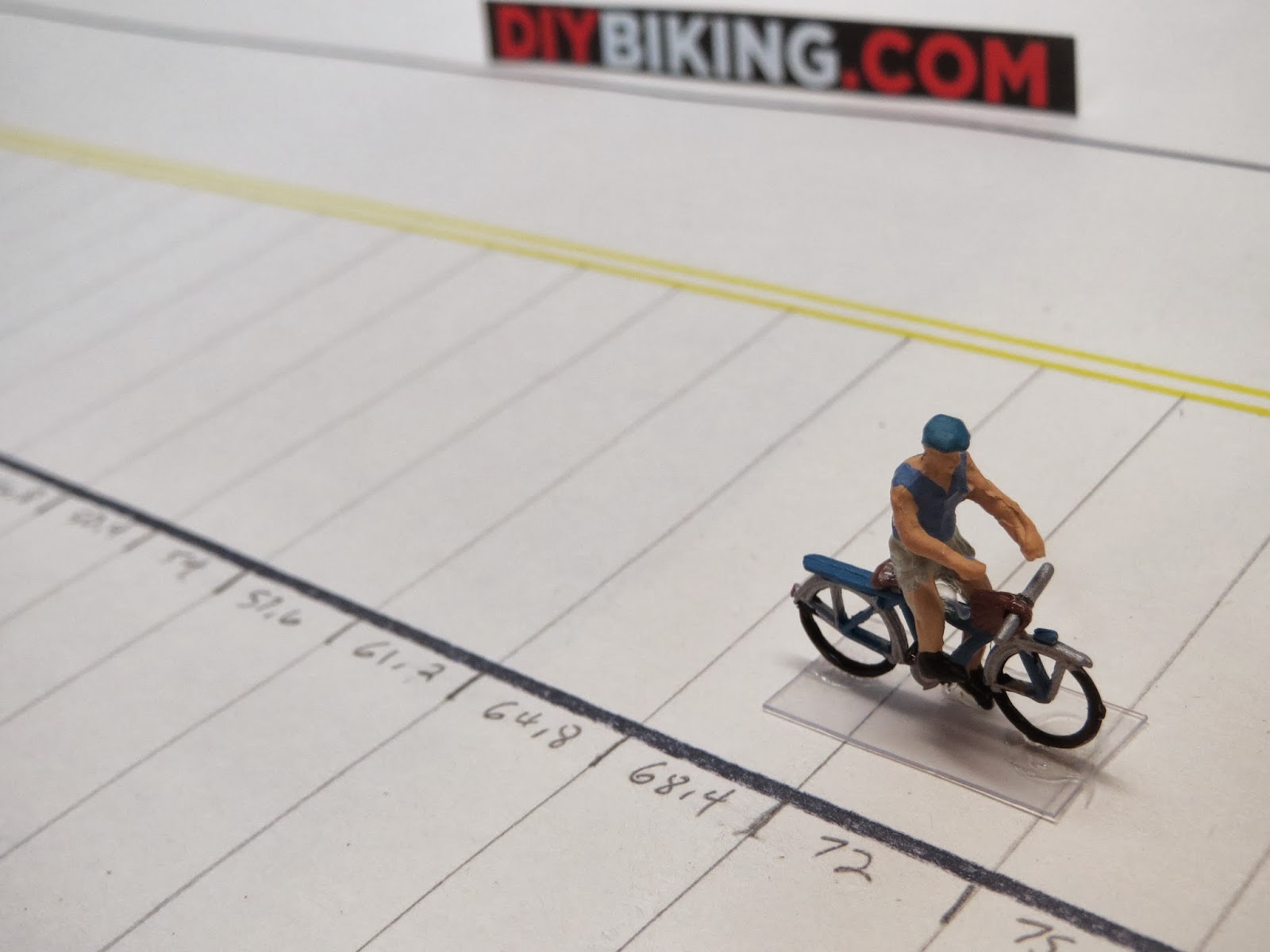 I then placed a car at the start line. In case you're curious, it is a Citroen. I can't recall the model but it's the same kind that Clark Griswold got wedged in a stone opening in European Vacation and what the taxi drivers use in Back to the Future Part II. 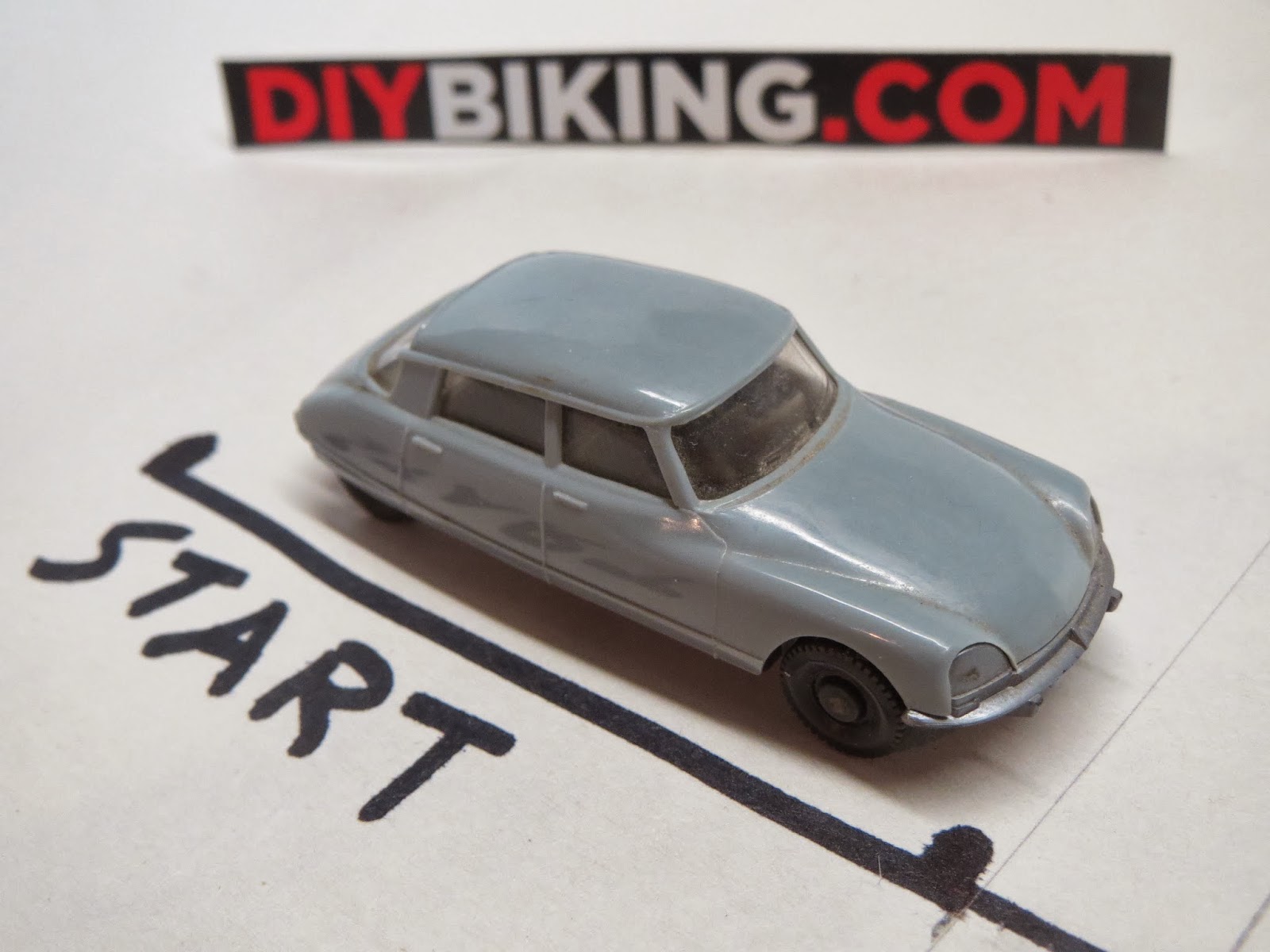 Next, it was time for some math. Since I was using a cyclist traveling on a road for this, I had to make an estimate on how fast he or she would be going. For the purposes of this post, the cyclist is moving at 10 miles an hour, or about 14.6 feet per second, which isn't too bad for level ground on a dark road. I used a piece of plastic marked with a red Sharpie to show how far a rider would go in about one second and about three and a half seconds. 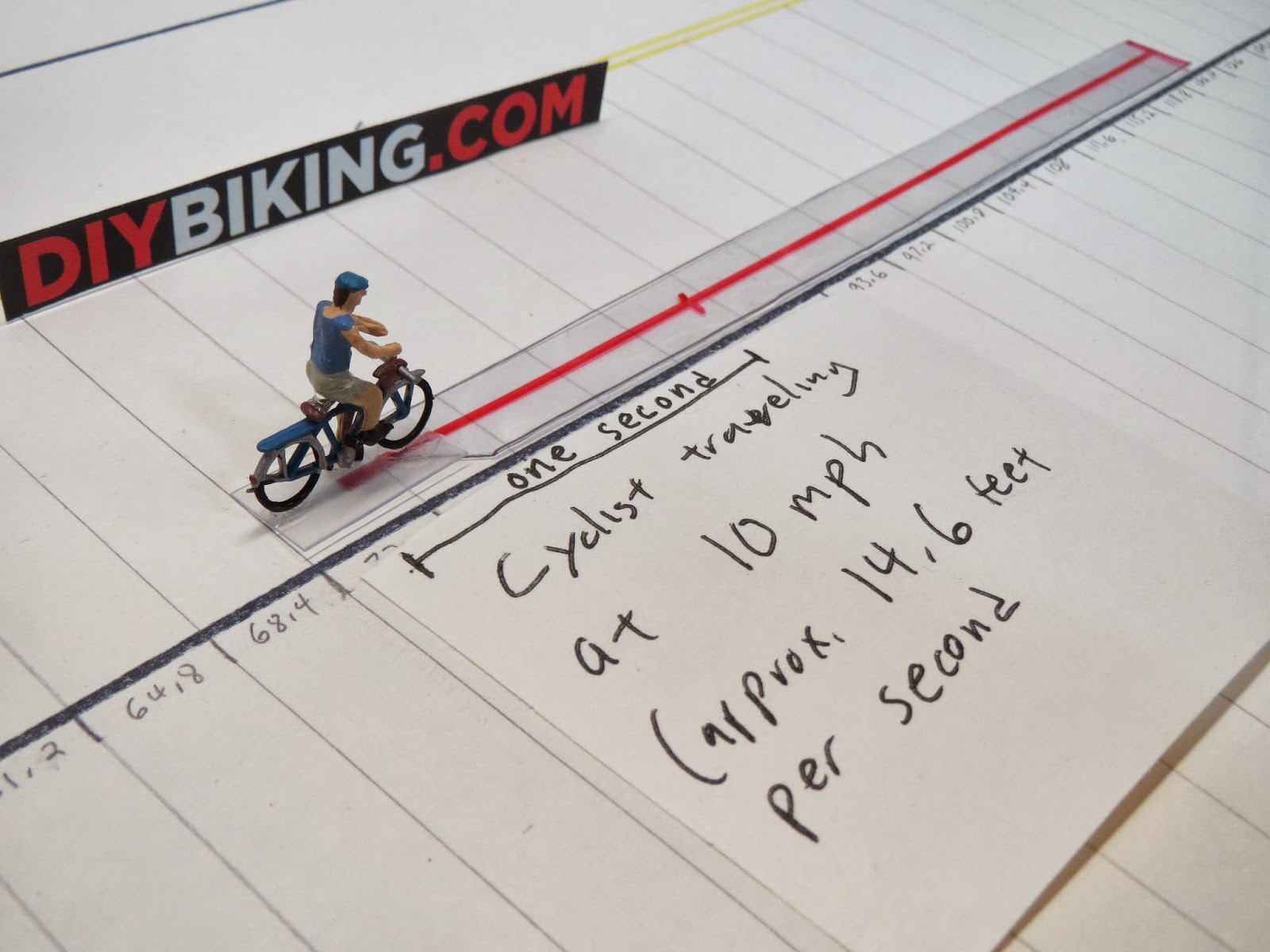 As I was setting all of this up, I had an email exchange with Christine Yager of Texas A&M University. She and others did some pretty incredible research on distracted driving and the impact of hands-free devices on motorists. Their research indicated that reaction time doubled when a person is using a cell phone, which, on paper anyway, would mean that instead of Seth, Evan and Fogel's conversation taking one second, it would take at least two.

To keep any invincible imbeciles from decrying the findings of science and boasting of their abilities to multitask faster than others, I decided to use a slightly more conservative estimate of the additional time needed by a distracted driver to react to something: 3/4 of a second.

So a non-distracted driver needs one second to react while a distracted one needs at least one and 3/4 seconds.

Got that? Good. Let's look at the numbers. 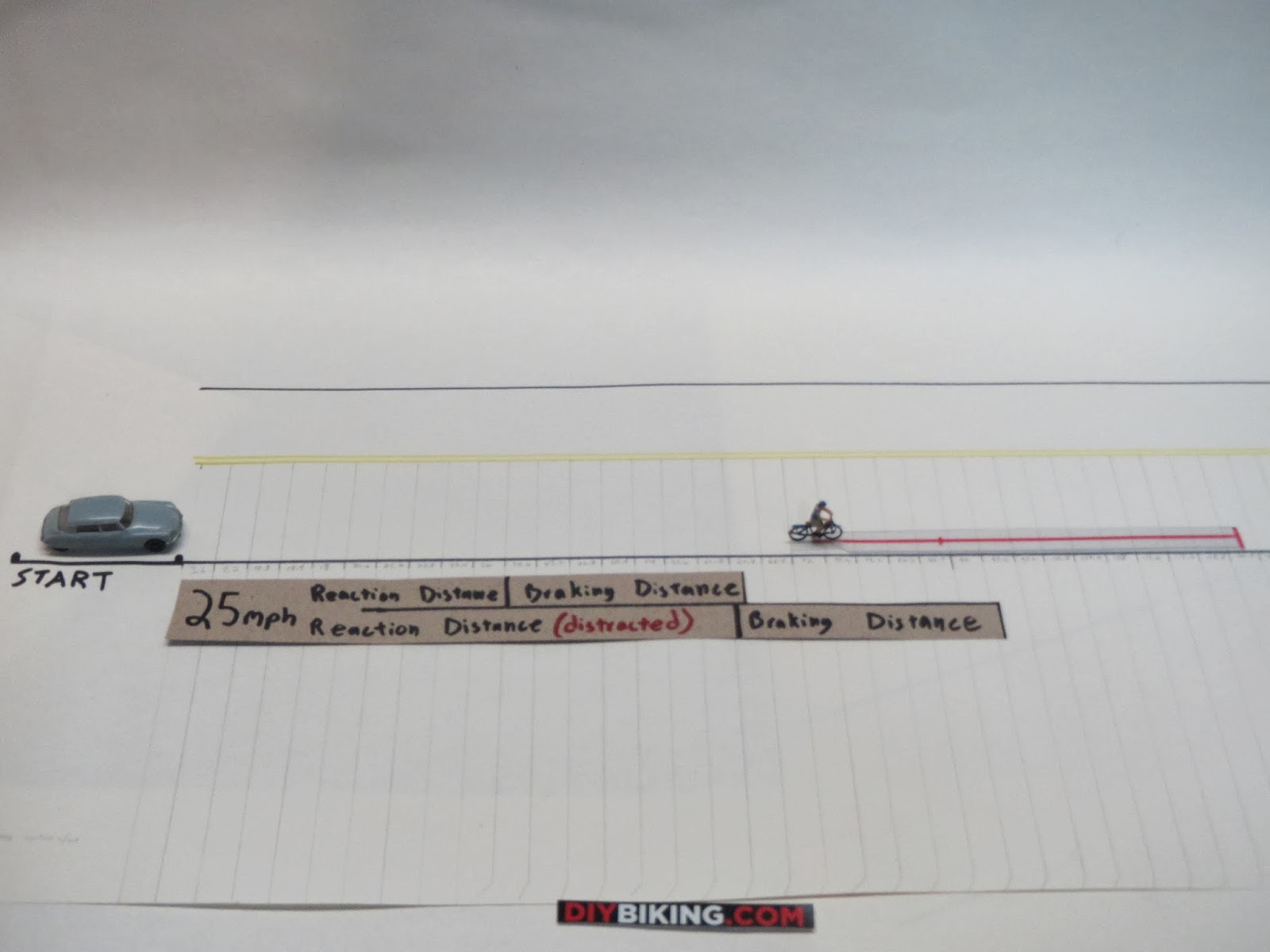 I've been in the research world most of my adult life - and have found there are a lot of 'howevers' involved.

Even though this, on paper, means the rider is safe (because he or she was traveling at 14.6 feet per second while the driver sees the cyclist, reacts to the cyclist, and stops for the cyclist) it doesn't take into account the condition of the road, the cleanliness of the headlamps, the quality of the brakes, the quality of the leg muscles used to lift the leg from the gas and apply it to the brake,  other things or objects that the driver sees before having a chance to see the cyclist…and so on. We're also assuming the cyclist is the ONLY danger on the road.

We're also assuming the car is going at 25 miles an hour. Motor vehicles go faster than that through the drive-through at the bank, so let's look at what a higher speed means. 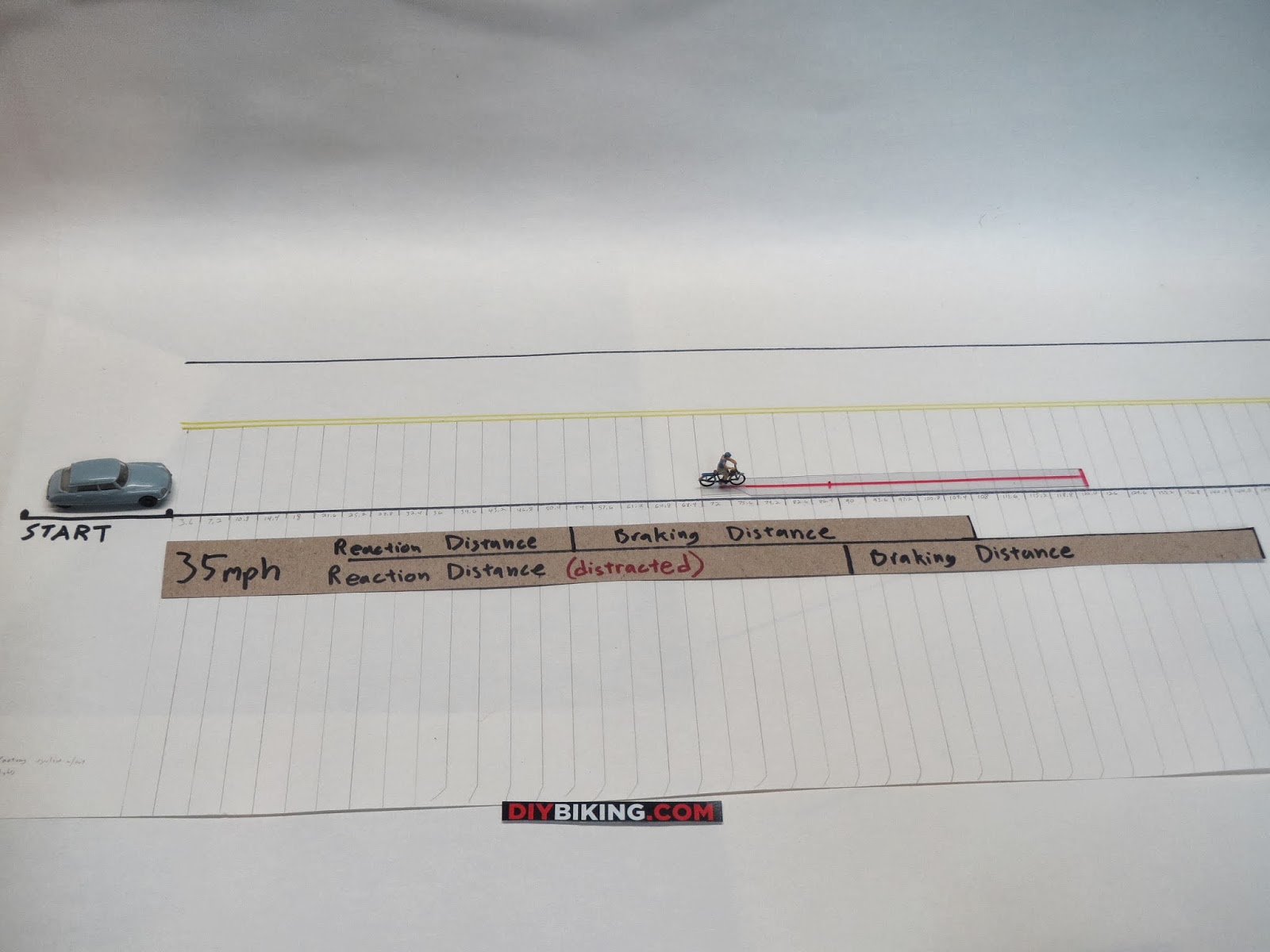 At 35 mph and no distractions for the driver (and assuming the cyclist can still keep up 10 miles an hour and not fall off their bike at the sound of the squealing brakes behind them) the car may just stop short of hitting the cyclist, giving both driver and cyclist a big scare and an exchange of expletives - possibly culminating in a Twitter war.

A distracted driver at 35 miles an hour will hit the cyclist before the car comes to a complete stop. That wasn't an easy sentence to write. A distraction - and the extra 3/4 of one second reaction time before the motorist hits the brakes - seriously injured or killed the cyclist.

And then we move to 40 miles an hour - where things get even worse. 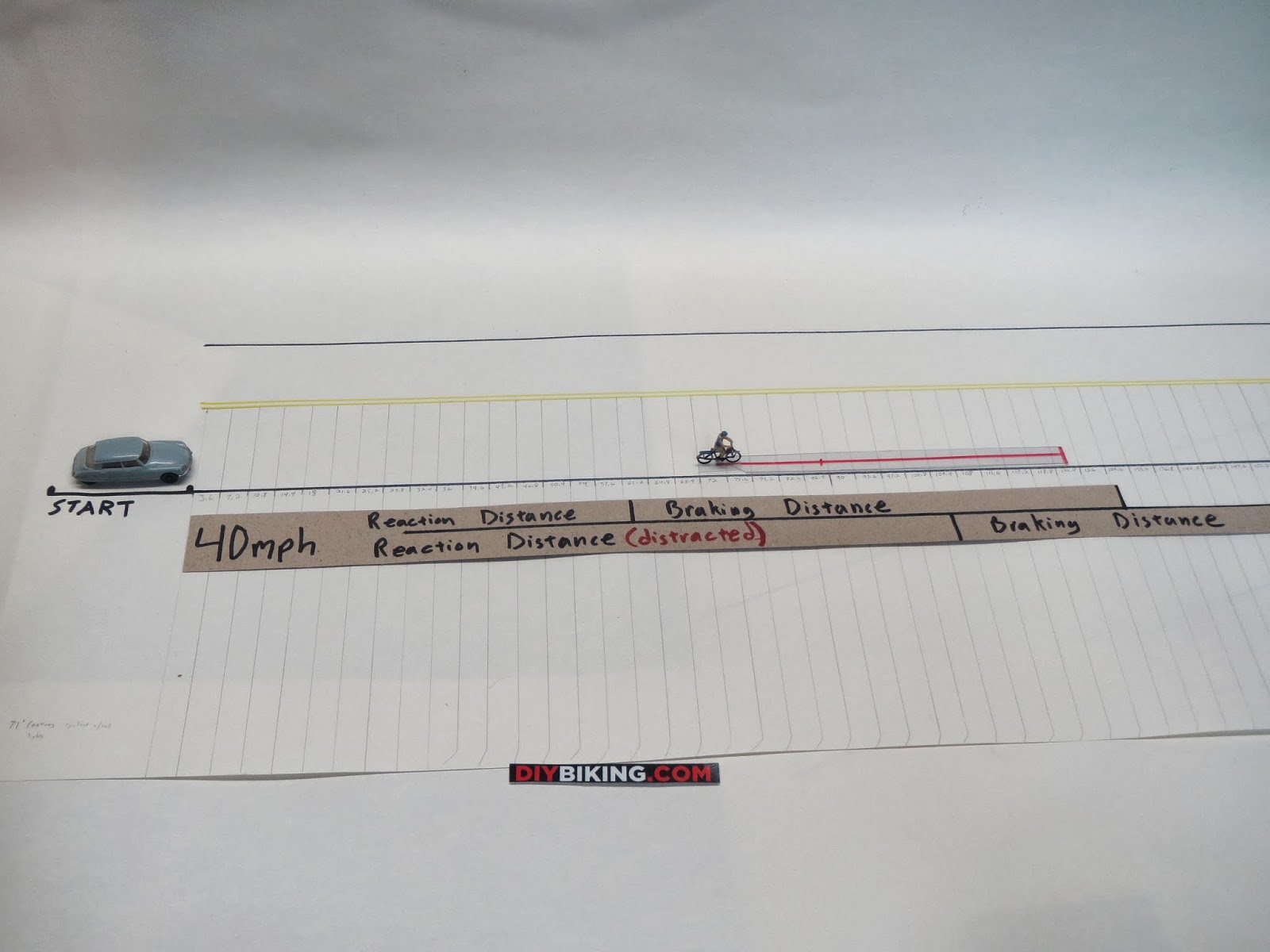 I would have to guess that 40 miles an hour is known as 'ramming speed' on Shippan Avenue, which is a busy road near where I live.

At 40 miles an hour, it literally doesn't matter how much attention one is paying to the road since a cyclist, riding in the dark with no lights or reflective gear, is going to be hit no matter what. Even though I did the feet per second calculations all the way up to 90 miles an hour, I didn't bother setting up props or taking pictures.

But as long as we're being freaked out by mathematics, I'll offer this: 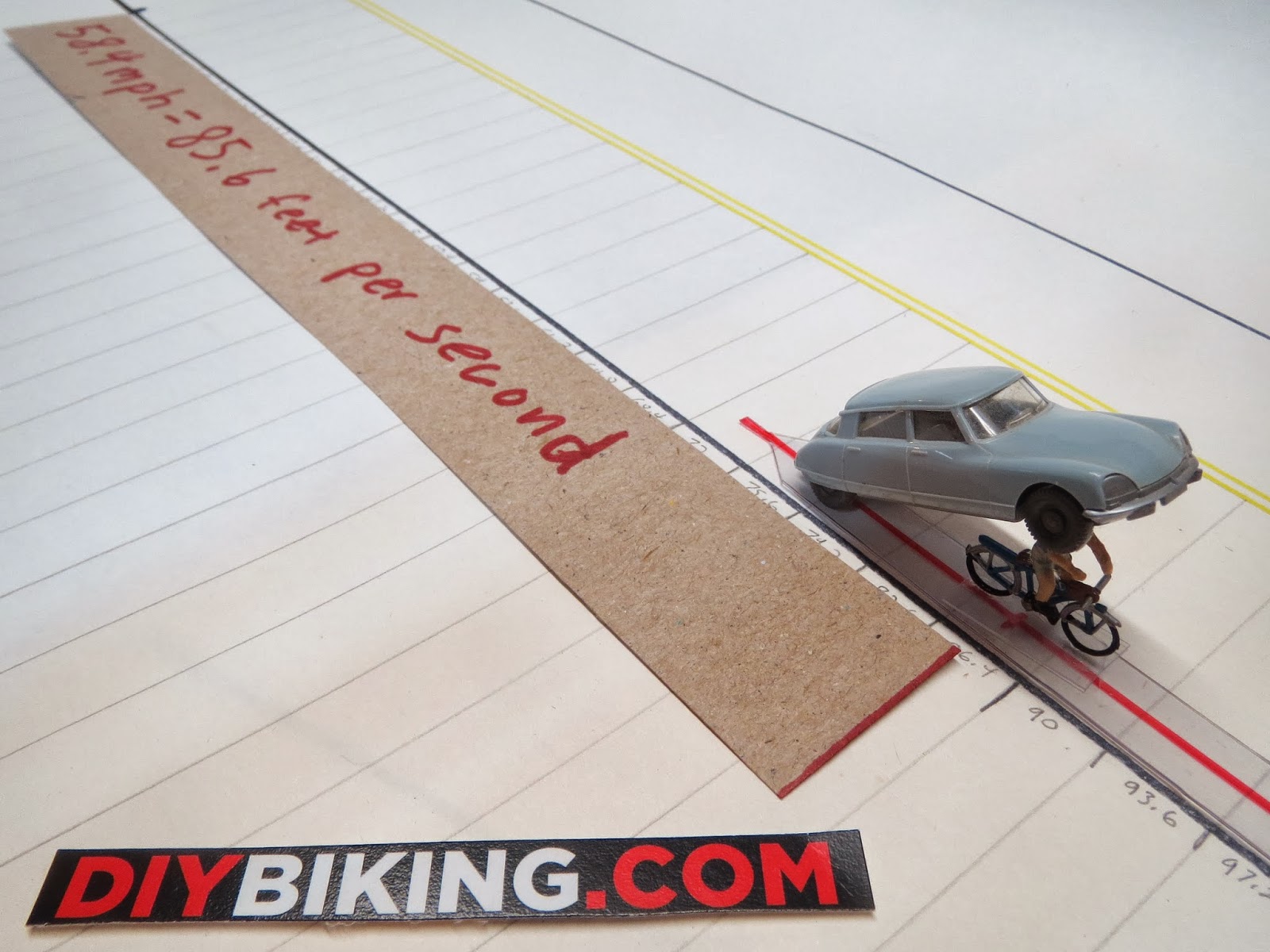 I was able to calculate the exact speed a car would have to be going in order to hit a cyclist 71 feet away before they have a chance to react. It's 58.4 miles an hour, which means that driver will go just over 85 feet and be right on top of the cyclist before either of them realizes there has been an accident.

The photo above does not show what would actually happen, but it does show my unwillingness to break any of my cycling miniatures. In real life, we'd be looking at a closed casket funeral.

Now that we're all properly watching-a-Rob-Zombie-movie-alone frightened, let's add just one more number to the mix.

The number: 4.6, which, according to government research found at distraction.gov, is the estimated number of seconds a person's eyes are not on the road when they are sending or receiving a text message. Christine Yager pointed out the figure in our exchange, and indicated it would be like traveling "the length of a football field essentially blindfolded" if a car was moving at highway speeds.

So that made me wonder: what if a person was sending or receiving a text going just 25 miles an hour? How far is that in feet? 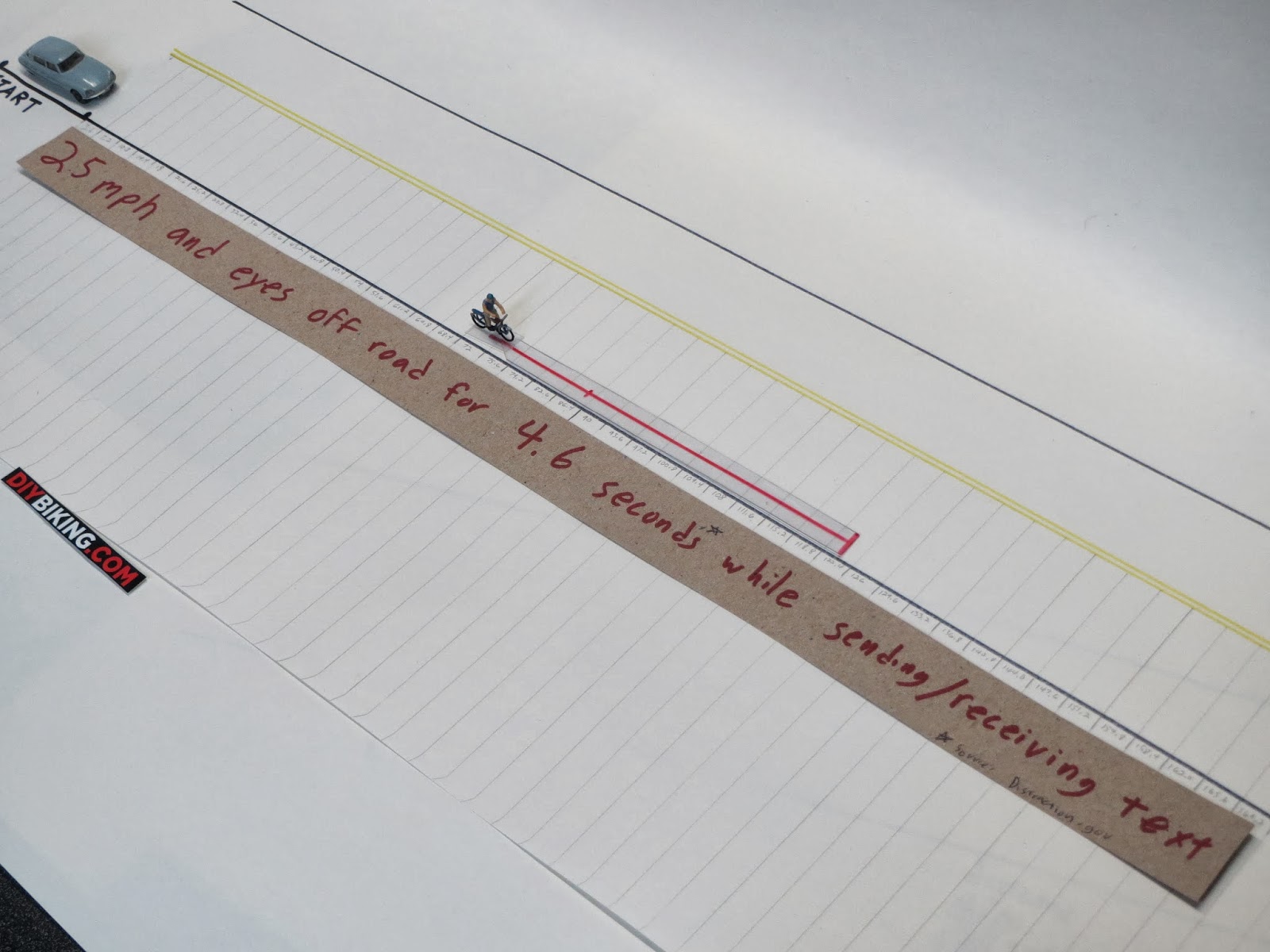 168 feet. Oh, and four inches. Not that the cyclist cares, of course.

To briefly break away from the usually light and cheery tone this site has had in the three years it has been in existence - and perhaps to channel Will McAvoy from Aaron Sorkin's The Newsroom - I offer this:

'Being online at all times and multitasking aren't values, they're slogans from companies who want you to be online and multitasking at all times. When you're not staring at a four-inch screen, you're not valuable to marketers, but you are valuable to to your family, your friends, and anybody you want to look in the eye. If you're behind the wheel of any vehicle, put your phone away. If you're in a car, don't be distracted and drive slower. If you're on a bike, the more lights and reflective clothing you have, the better.'

Hope all of this is an incentive to dress a little brighter, pick up a few lights at your local bike shop, and to stow your phones when you're behind the wheel. If you already practice this, please forward this post to friends who might need a reminder.  Thanks for reading and thanks for riding. 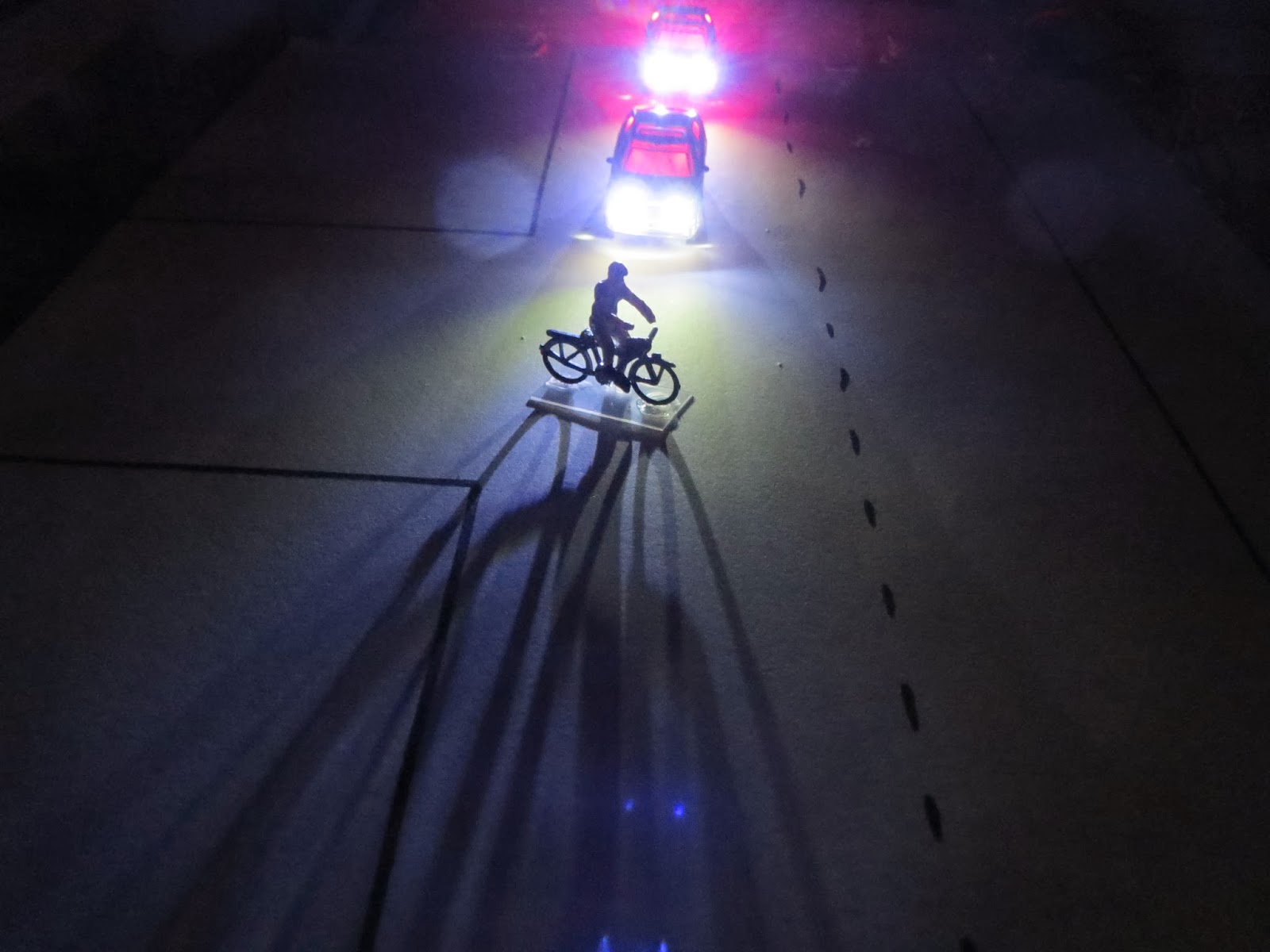 Email ThisBlogThis!Share to TwitterShare to FacebookShare to Pinterest
Labels: safety