DIYBIKING.COM Presents: Staying Safe While Riding at Night (Part I) 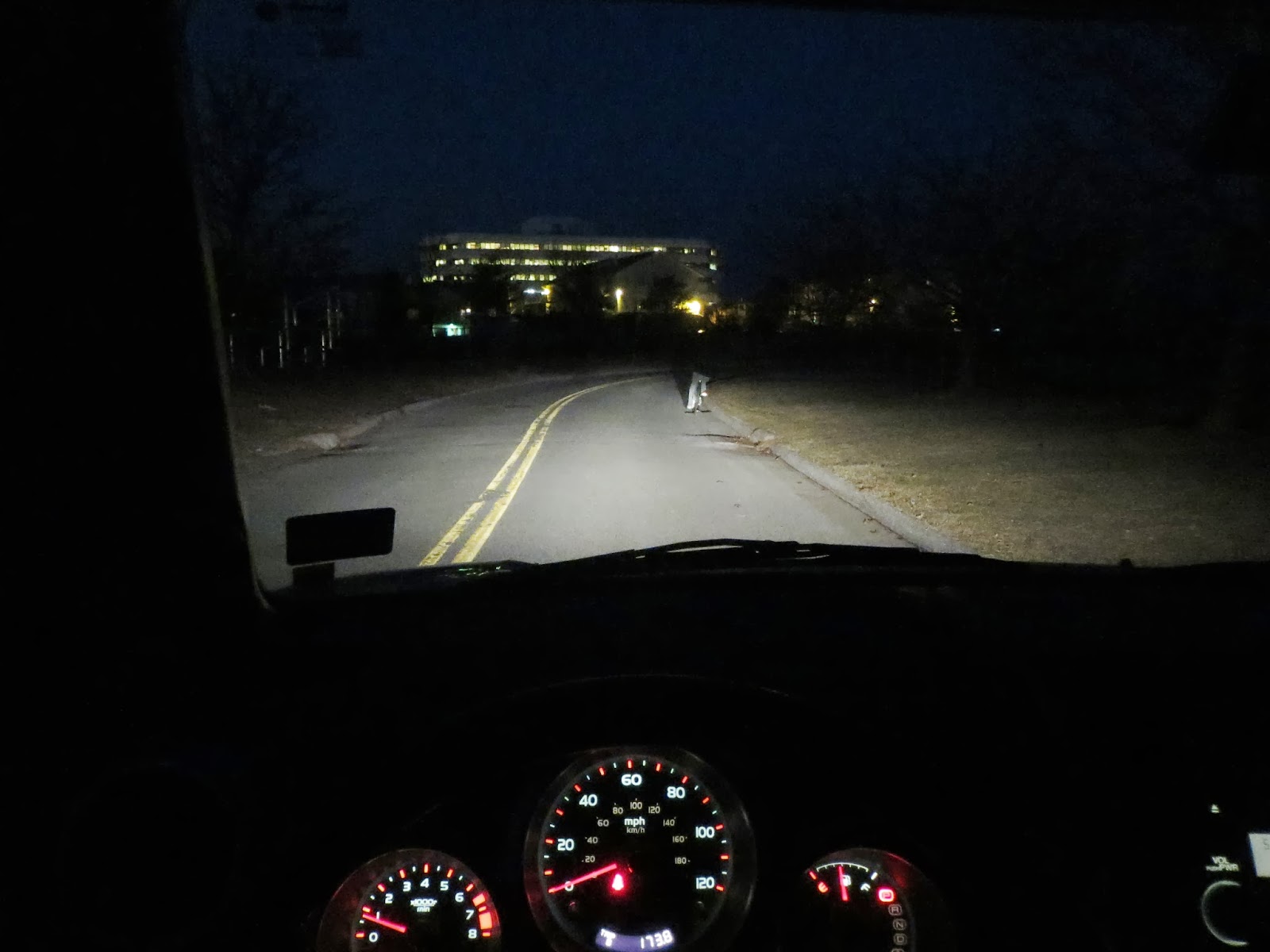 Define irony: you're taking photographs on a dark road for a post about safety while riding at night and a police officer kicks you out of the park you're using…because you're a safety hazard.

I've been wanting to cover how to bike safely at night for well over a year, but the post I have long wanted to do has involved two things I have been known to have trouble with:

1) Taking high quality, high resolution photos of cyclists at night in such a way the risks of such travel are understood to both cyclists and drivers.

Let's start with the first one. 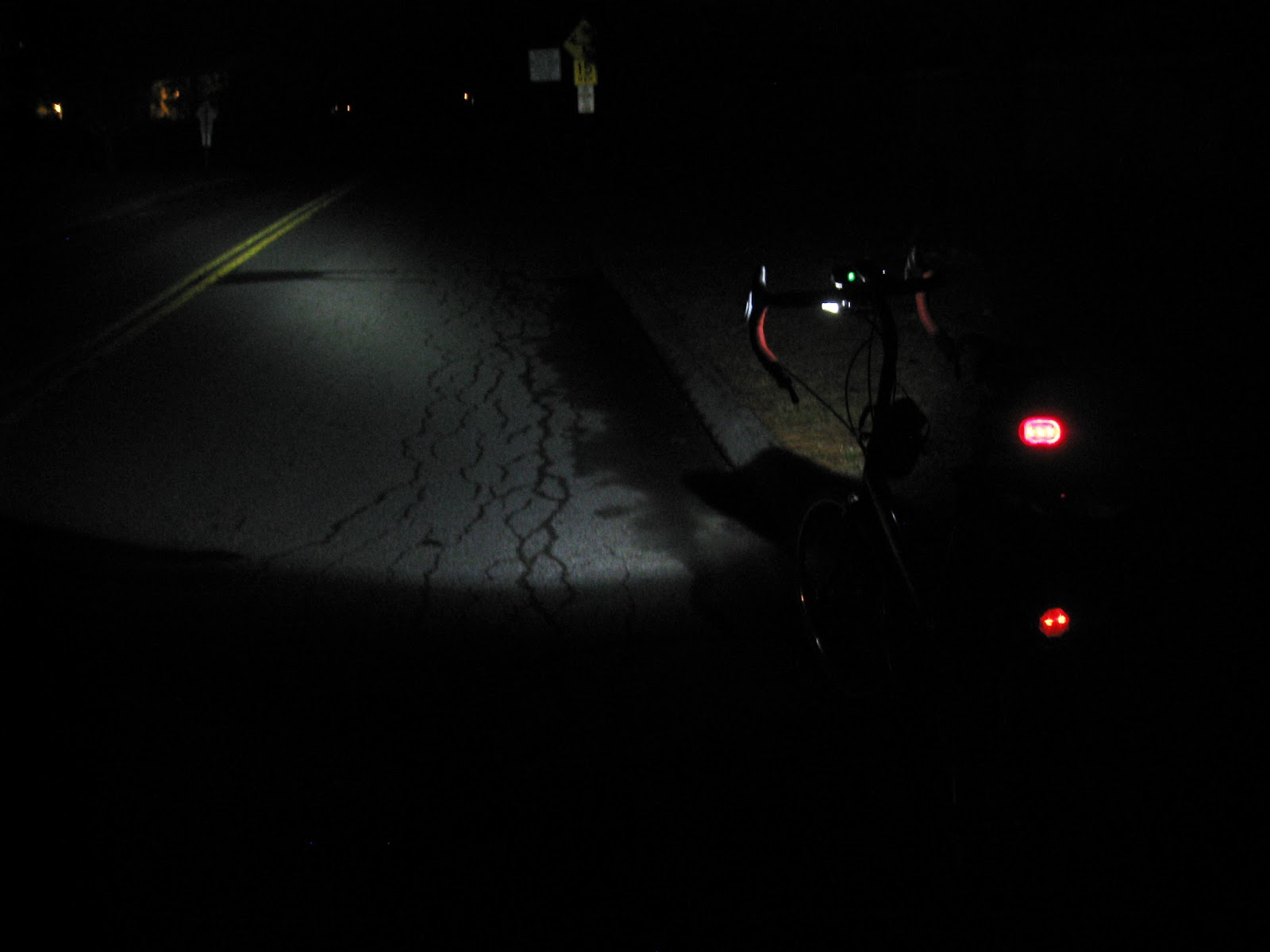 The photo above is bad by accident but I posted it here it on purpose. Believe me when I tell you it is merely the tip of an ugly iPhoto image library iceberg.

Those of you who've followed me for a while know my appreciation for shadows on sunny days, especially when riding very early in the morning like in New Hampshire a couple years ago. 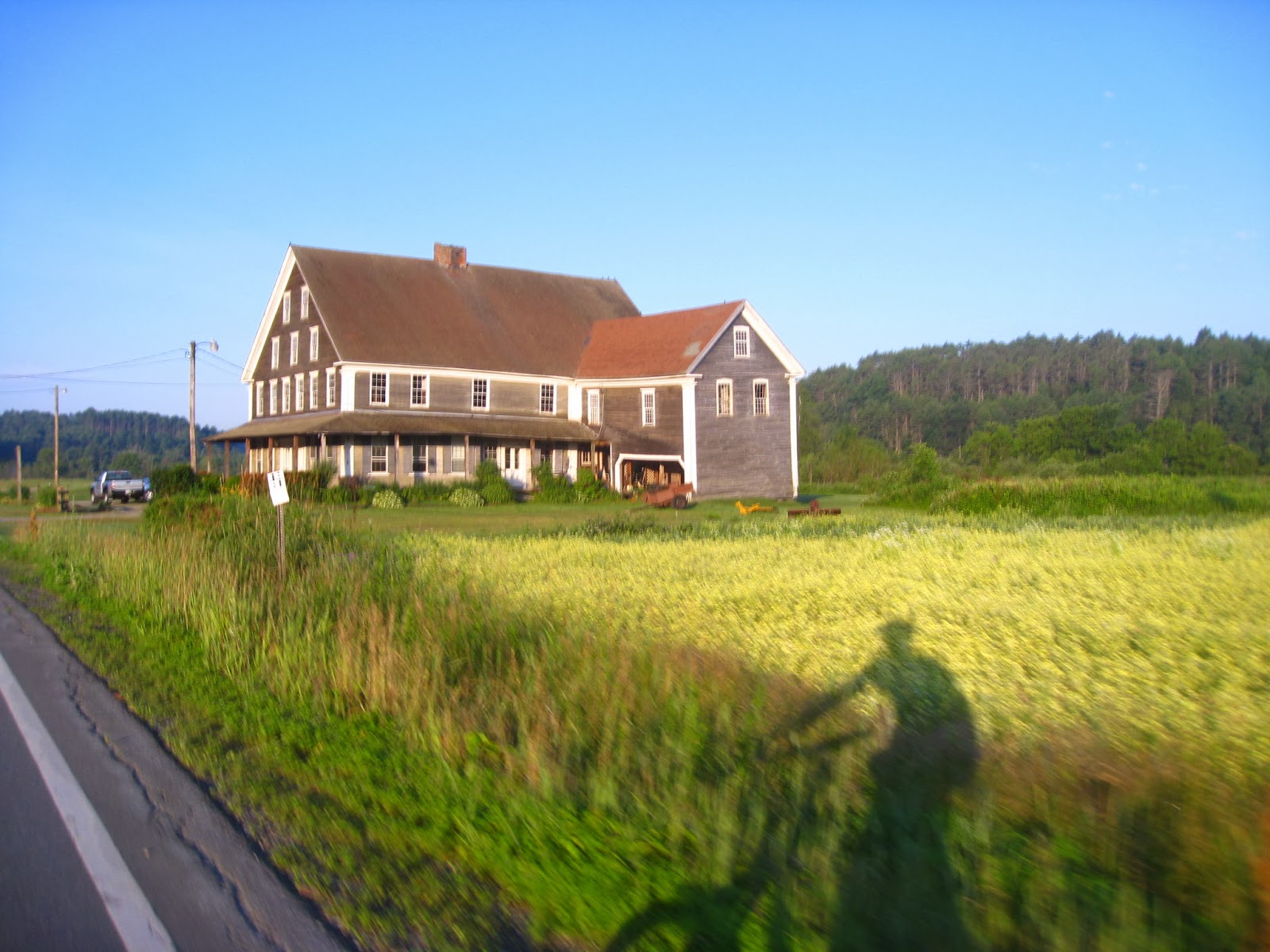 But taking pictures at night is tough, and when you want cyclists to understand how much different night riding is compared to riding during the day, pictures from the point of view of a cyclist who is actually riding at night doesn't cut it. 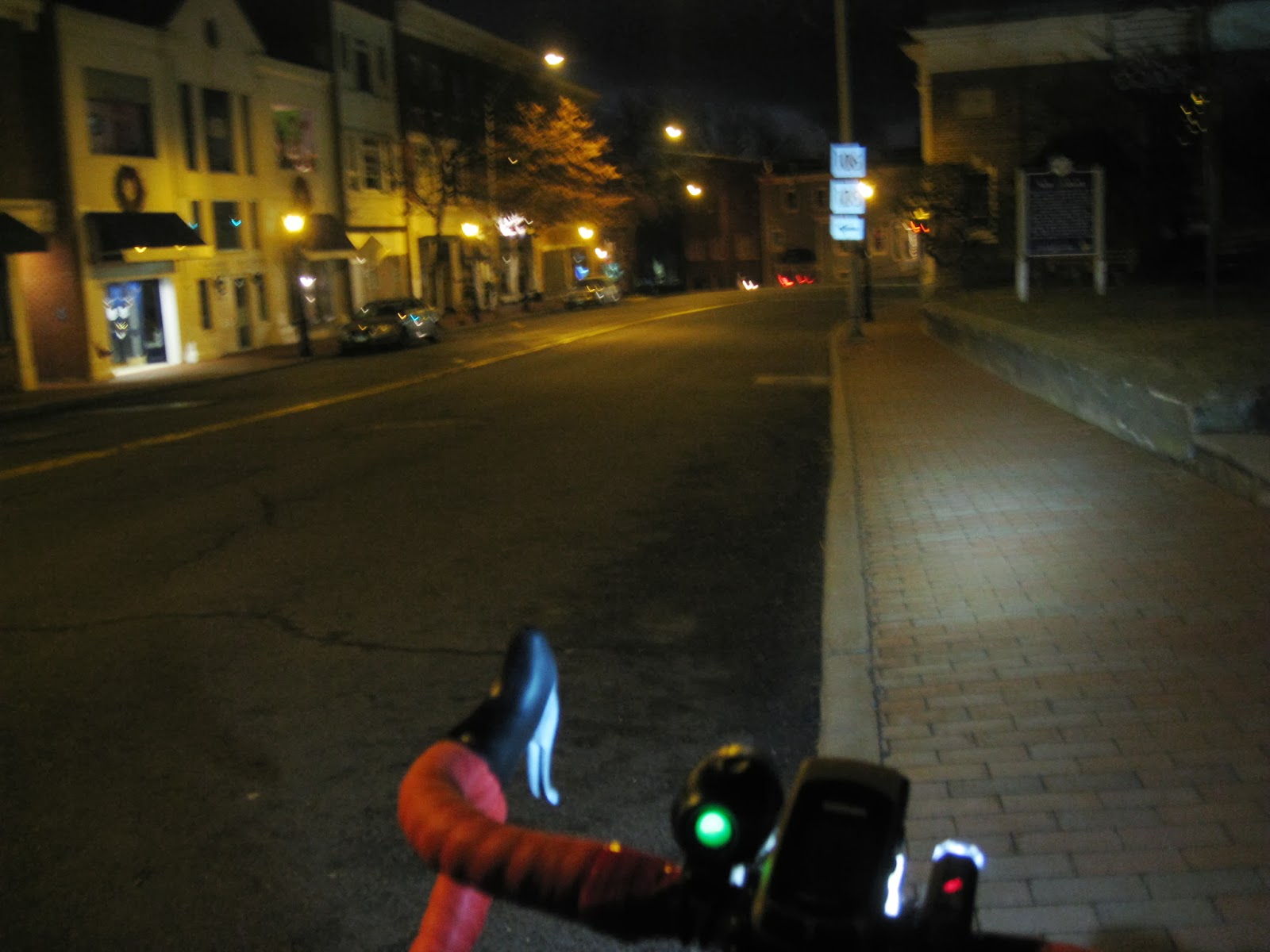 But a lot of cyclists just don't get it, and some even have really bizarre reactions to others simply suggesting they take more ownership over their own safety. When I was reading BikeSnobNYC's reaction to the New York Times opinion piece about cyclists getting hit, it reminded me of the far-right or far-left loudmouth who makes good TV but never gets above 1% of the vote in any election.

Look: I don't care if the car coming up behind you or turning into your path is driven by an attentive person traveling at a safe speed, a guy on a cell phone and shaving at the same time or a serial killer heading home from vacation. Cars are cars and I don't want anyone to be hit by any of them. And I like to think of the people who drive them as prospects, not enemies. Calling them names does nothing productive, but anything you do to increase the odds of a car passing by you without incident is smart.  Not outfitting your bike for night travel, not dressing for visibility and running red lights (at any time of day, for that matter) are just three stupid things you can do - no matter where you live or who you share the road with. The whole I-must-not-impair-the-look-of-my-ironic-hipster-outfit-so-look-on-my-fixed-gear-ye-mighty-and-yield! mentality doesn't cut it.

But I'm getting ahead of myself.

Now a lot of you already know, or think you know, what you should wear or outfit your bike with (and I'll probably cover that) but the big theme of this series is why you need to stay safe while riding at night.  The words 'because its safer' have no impact, and besides: that's only three words. I'm sure I can cover why you need stay safe with more words than that - and perhaps, even if by accident, more impact.  Let's wade into that by taking a look at the picture below. 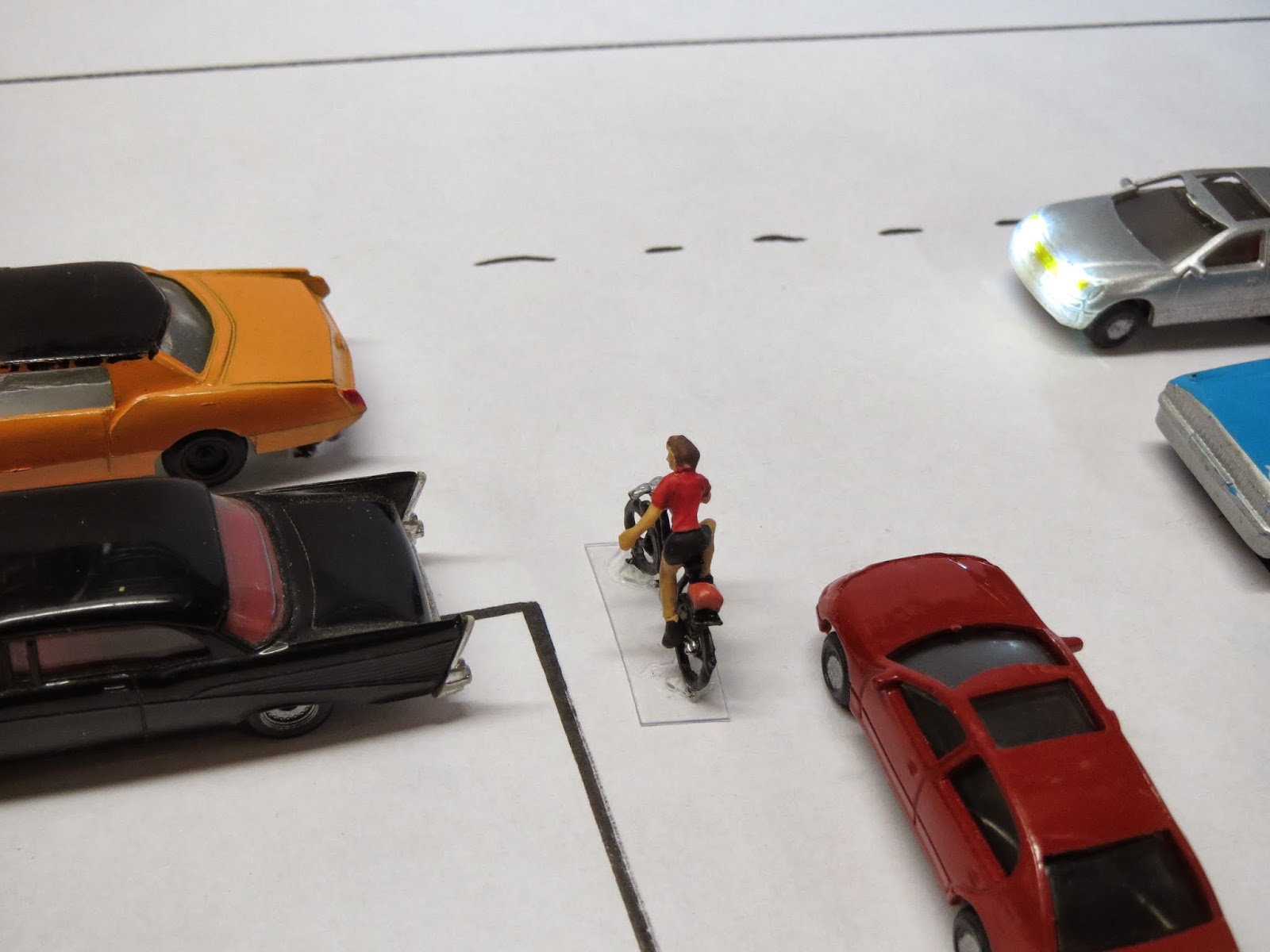 This is a cyclist on a side street waiting to make a turn into traffic. But what happens if I turn off the basement lights/if it is dark instead? 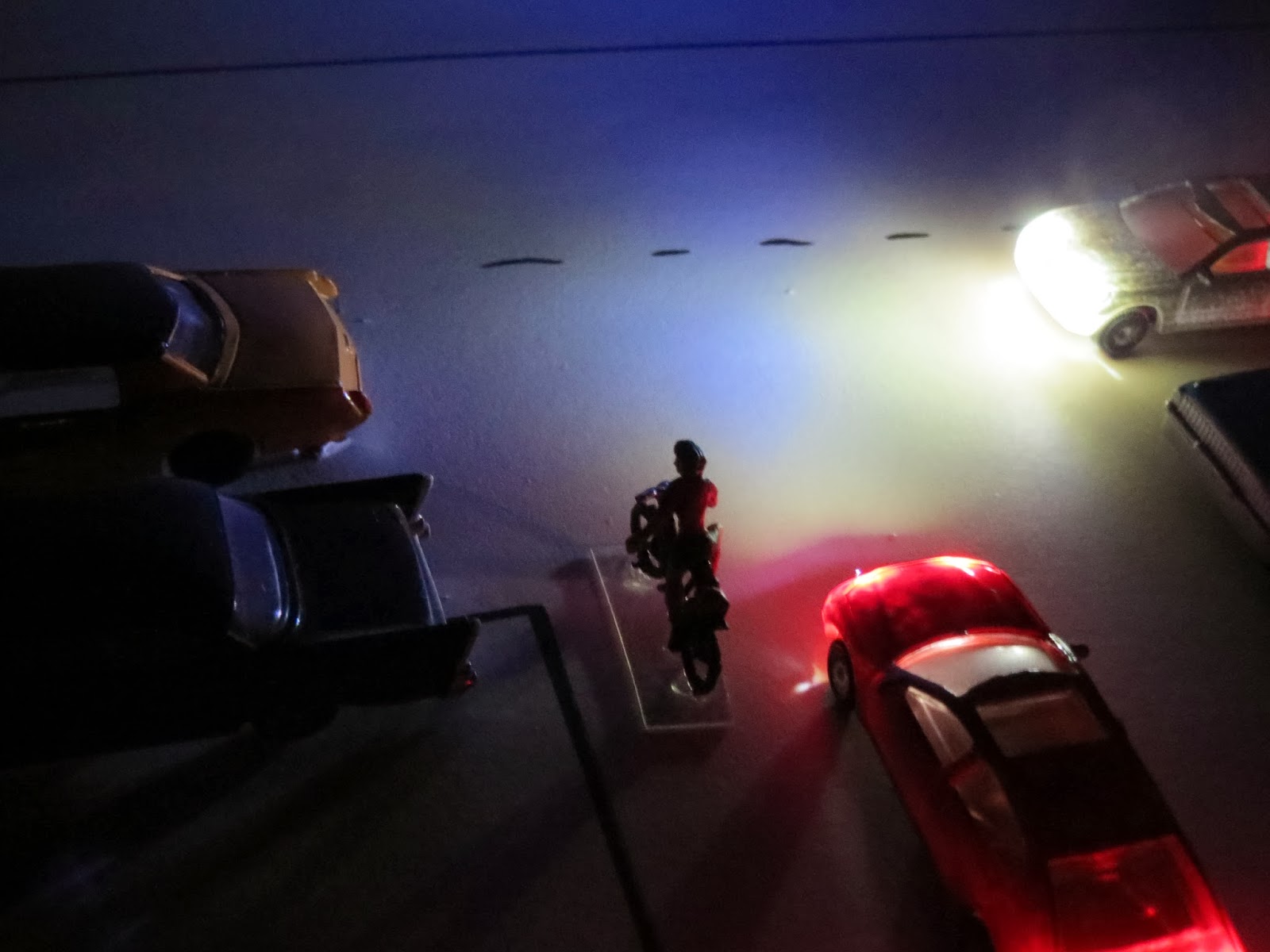 Now let's imagine a cyclist simply sharing a straightaway with a car. 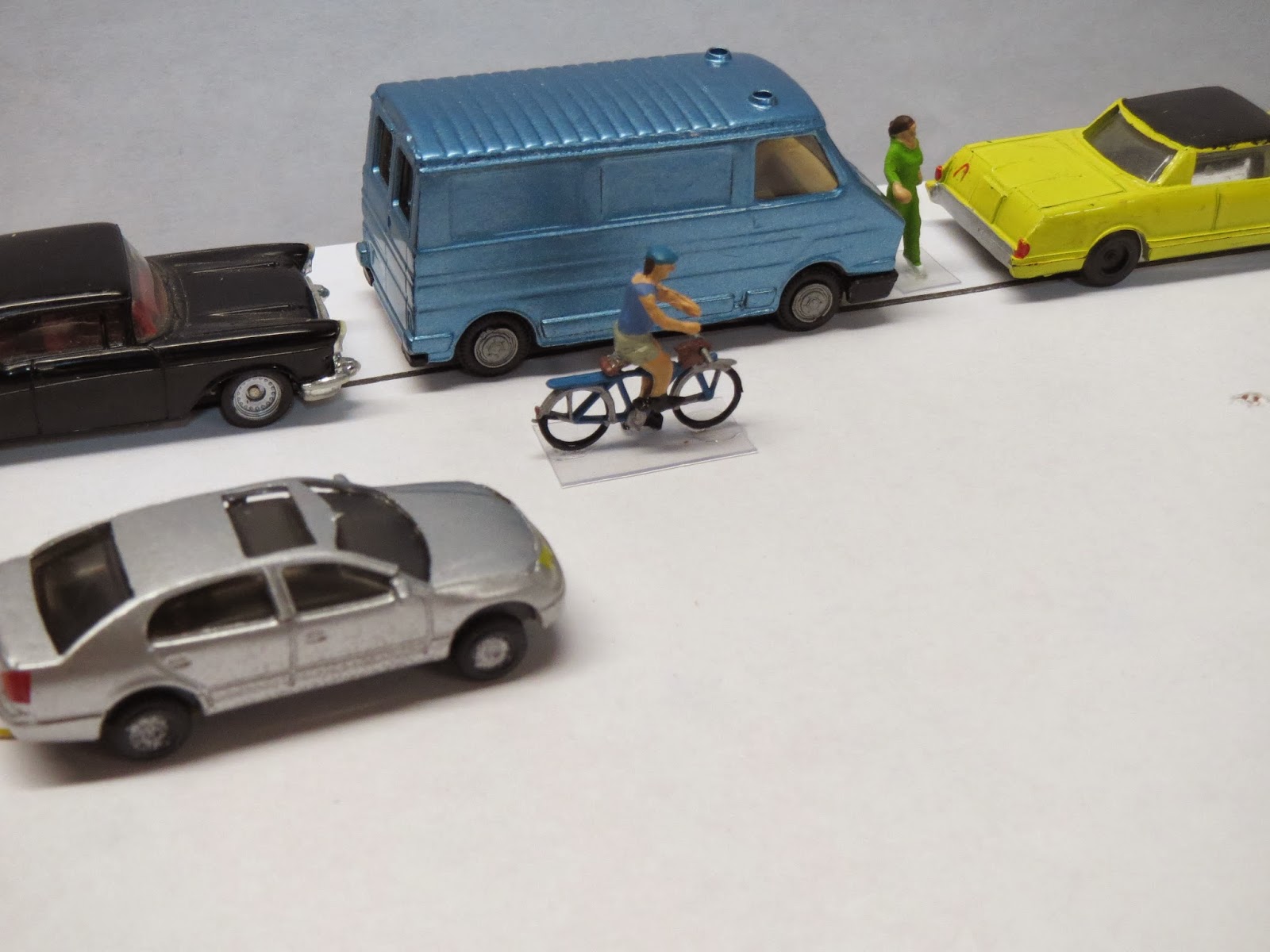 And when the cyclist is riding at night: 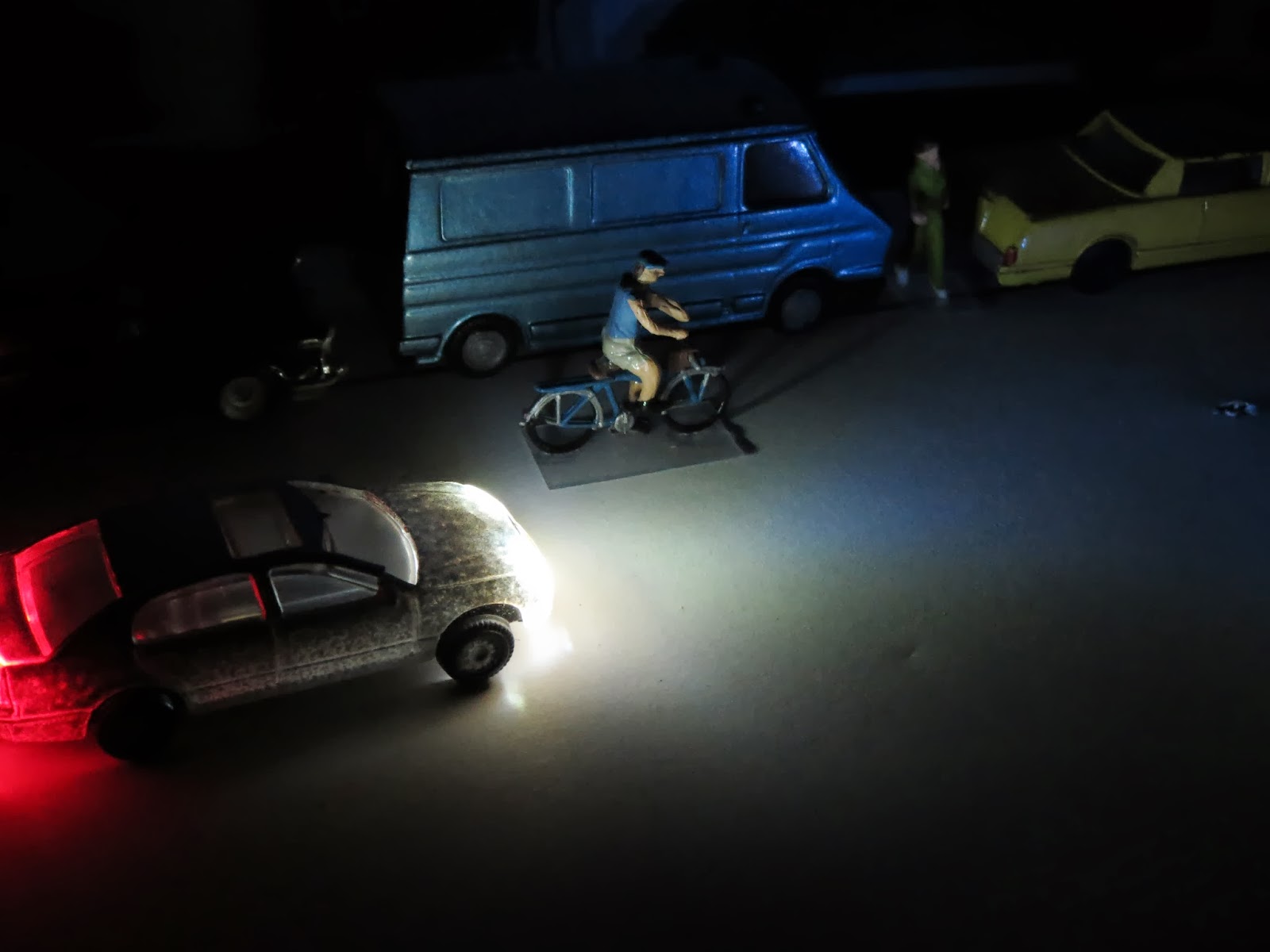 Here's one more: a cyclist riding alongside a van. 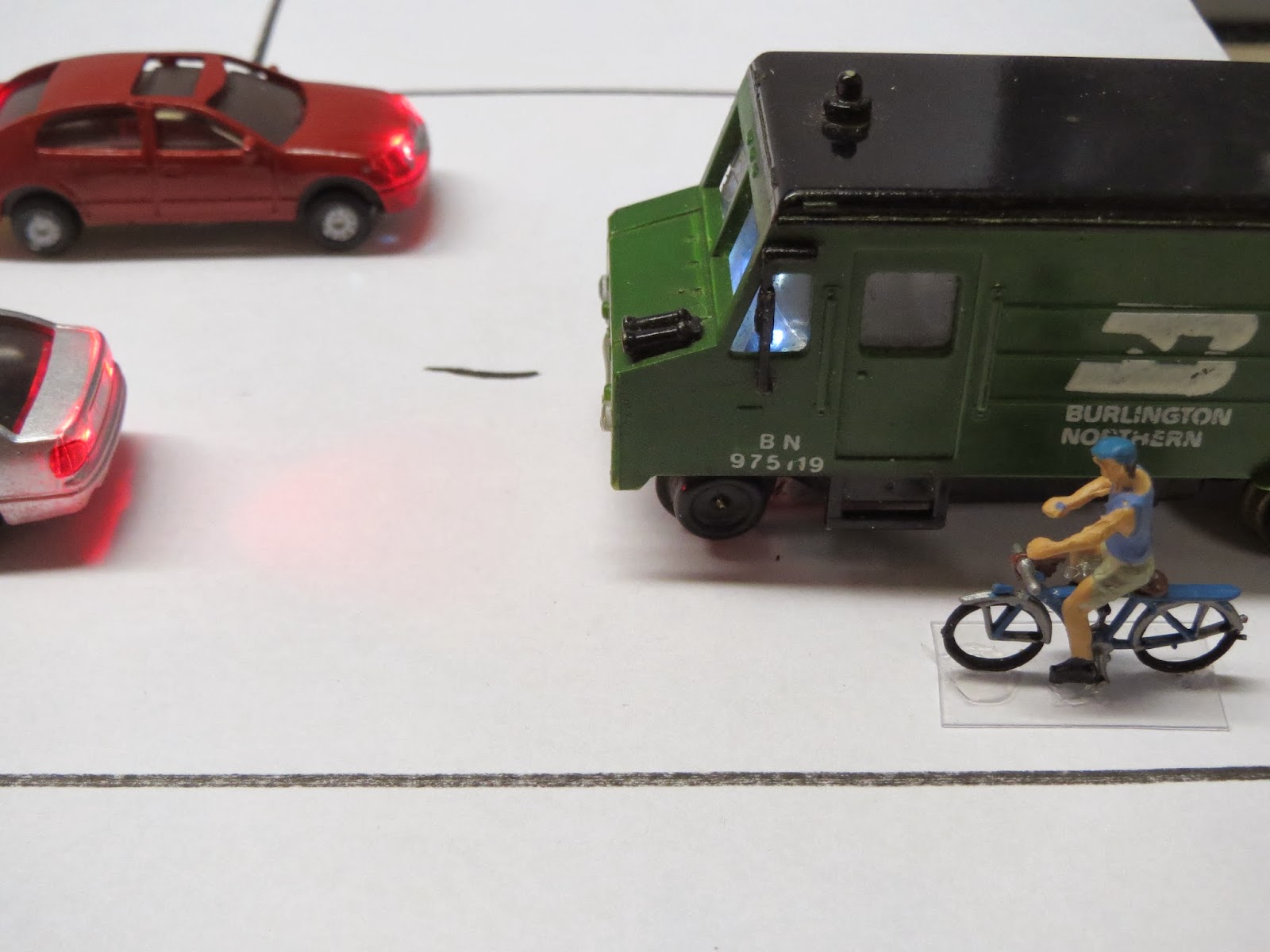 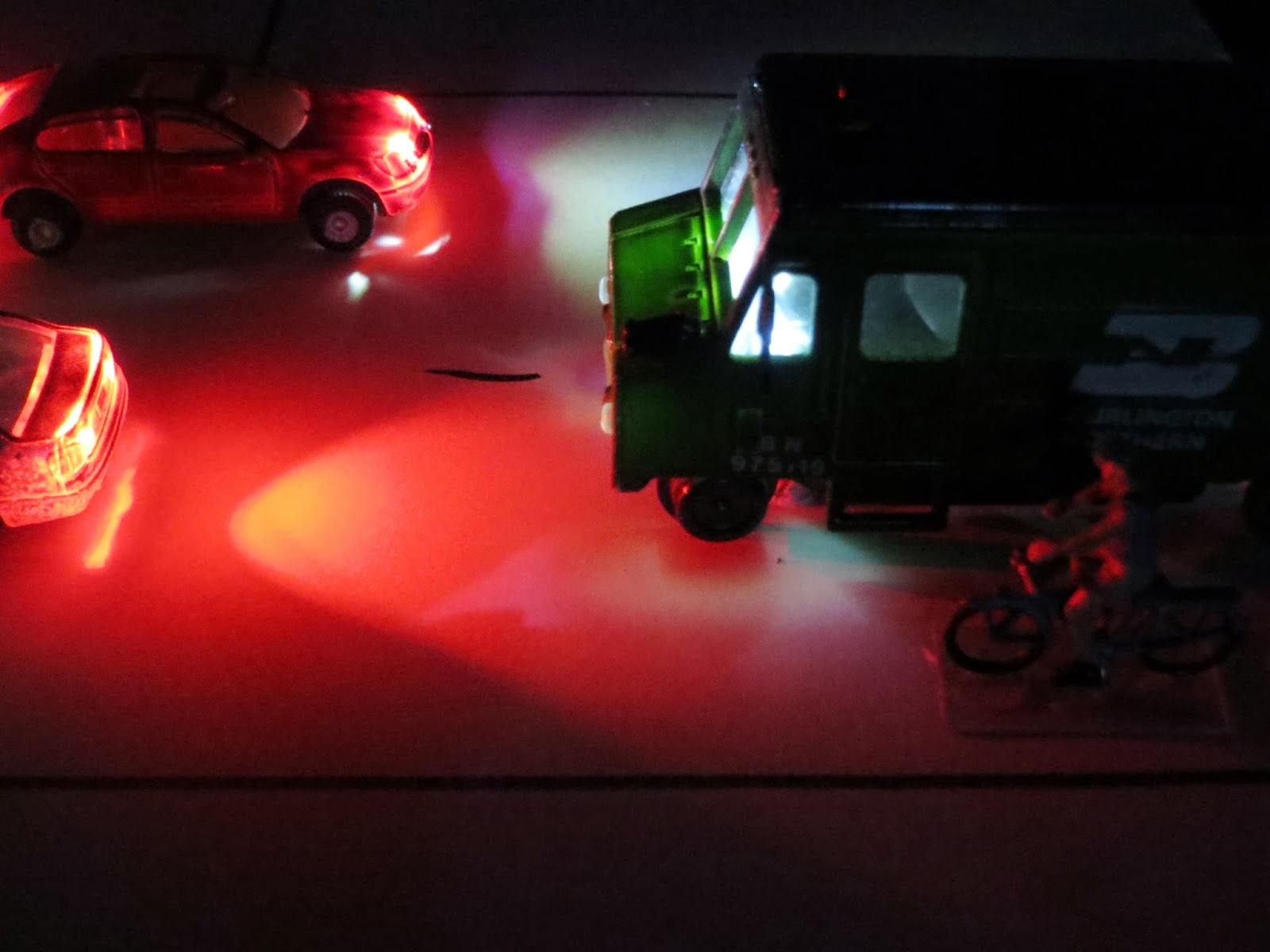 Think about a city as through it were an attractive person and 'day' and 'night' are two completely different outfits. It's the same person, but your eyes are being drawn to different things. Day is like a hoodie with pink yoga pants and night is a black cocktail dress with a low neckline.

I'm going to quit that metaphor while I'm ahead. 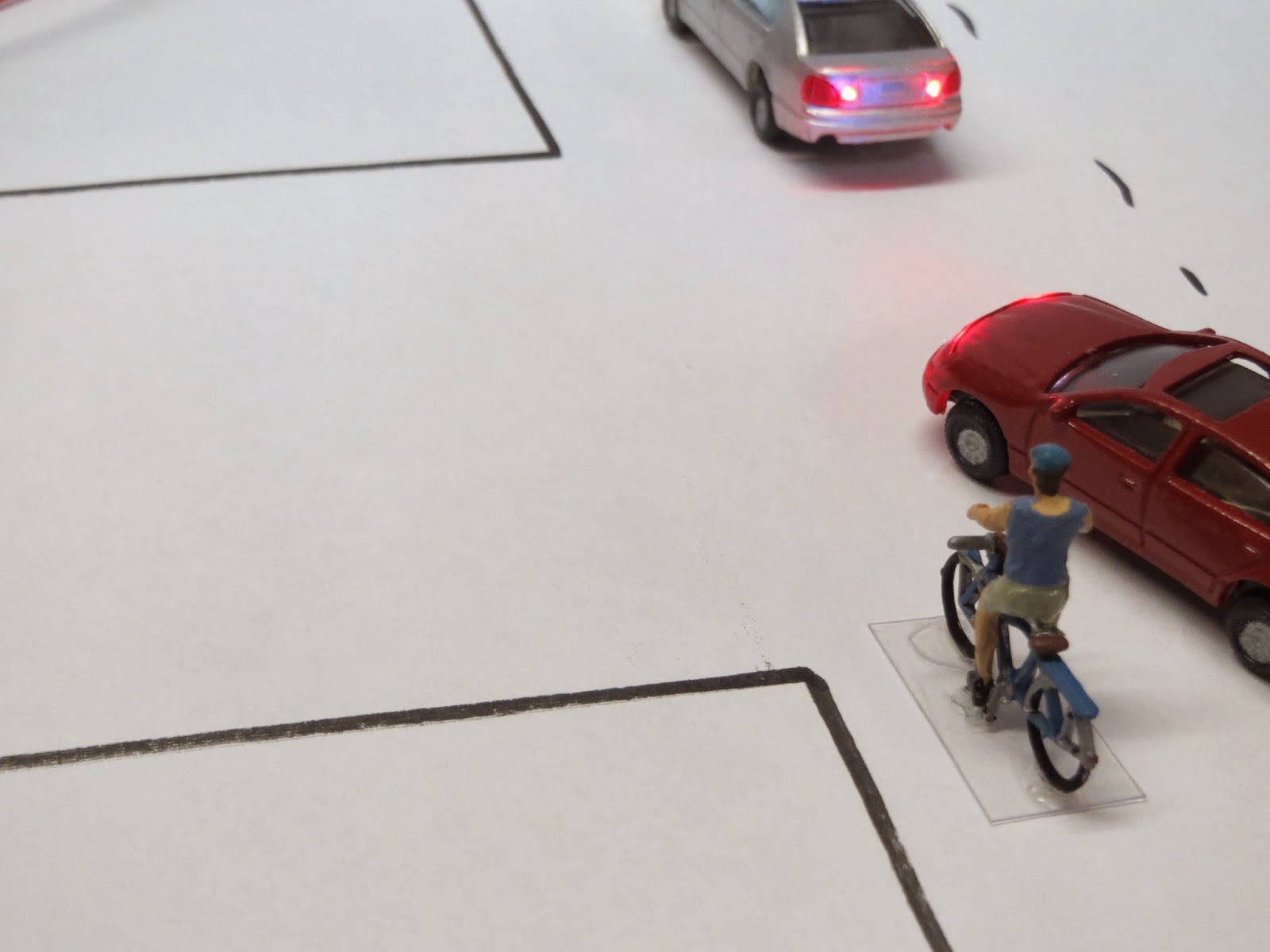 So because our eyes are drawn to two different things (such as the shape of a car or bike during the day and the pools of light from the headlamps at night) we have to account for that when we ride at night. It's also part of why I think Blaze, the new bike light manufacturer in the U.K., is really onto something with their Laserlight that projects an image of a cyclist on the road right in front: it's an extra visual cue that tells somebody flat-out there is a cyclist about - and there isn't a shortage of times that would help. 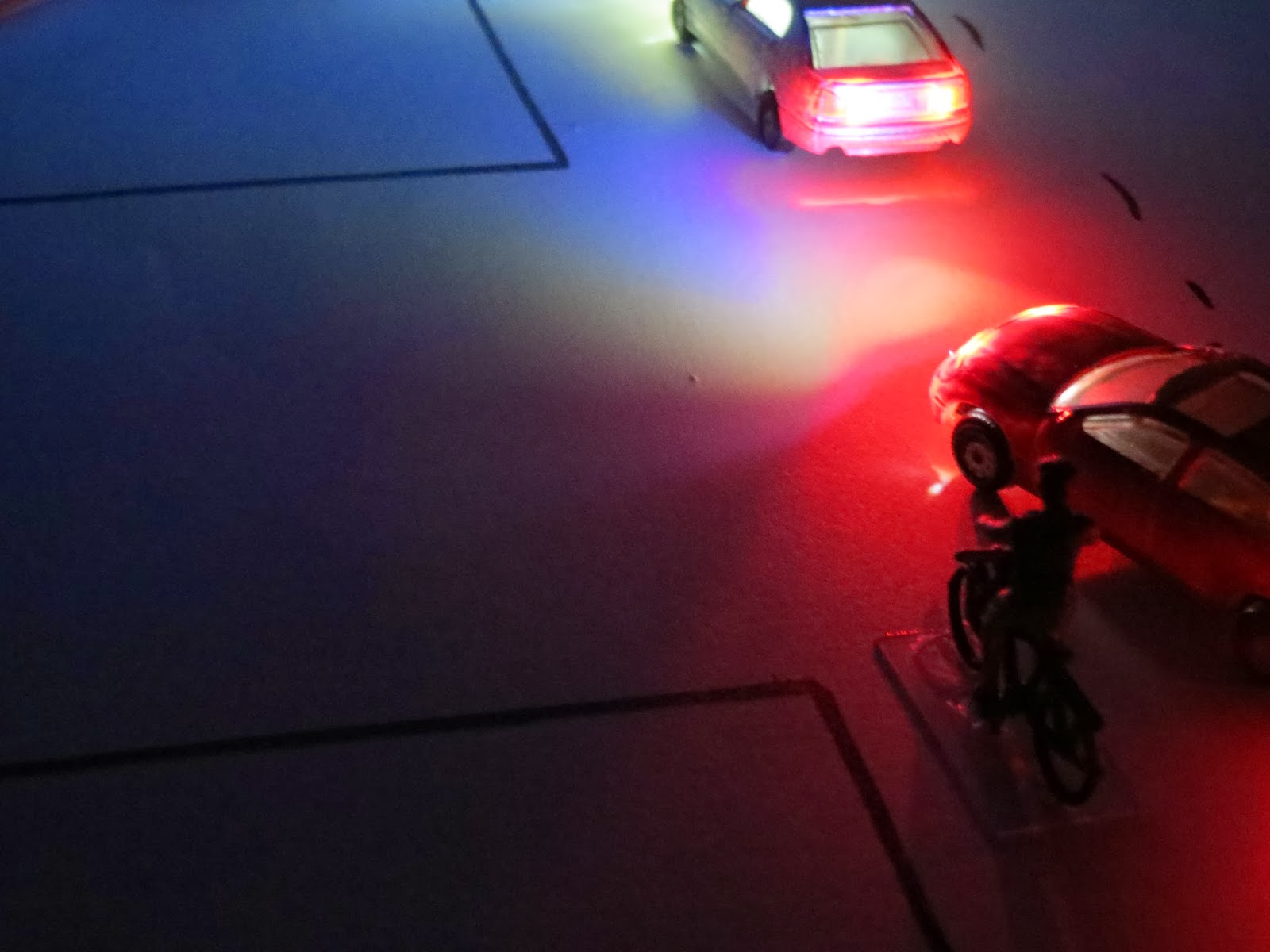 As usual, my miniatures are telling a story in a way that I can't, but because I'm just getting started with this theme of staying safe while riding at night, I need to ask myself: W.W.A.S.D? which is a commonly used abbreviation in workshop worship circles for: 'What Would Adam Savage Do?'

And that is what I'm going to do next. Get your Christie Administration Approved traffic cones, a heavy coat and a flashlight, because we're taking pictures of a car and a bike outside. Tune in again soon for Part II or become a follower of DIYBIKING.COM. Thanks for reading and thanks for riding. 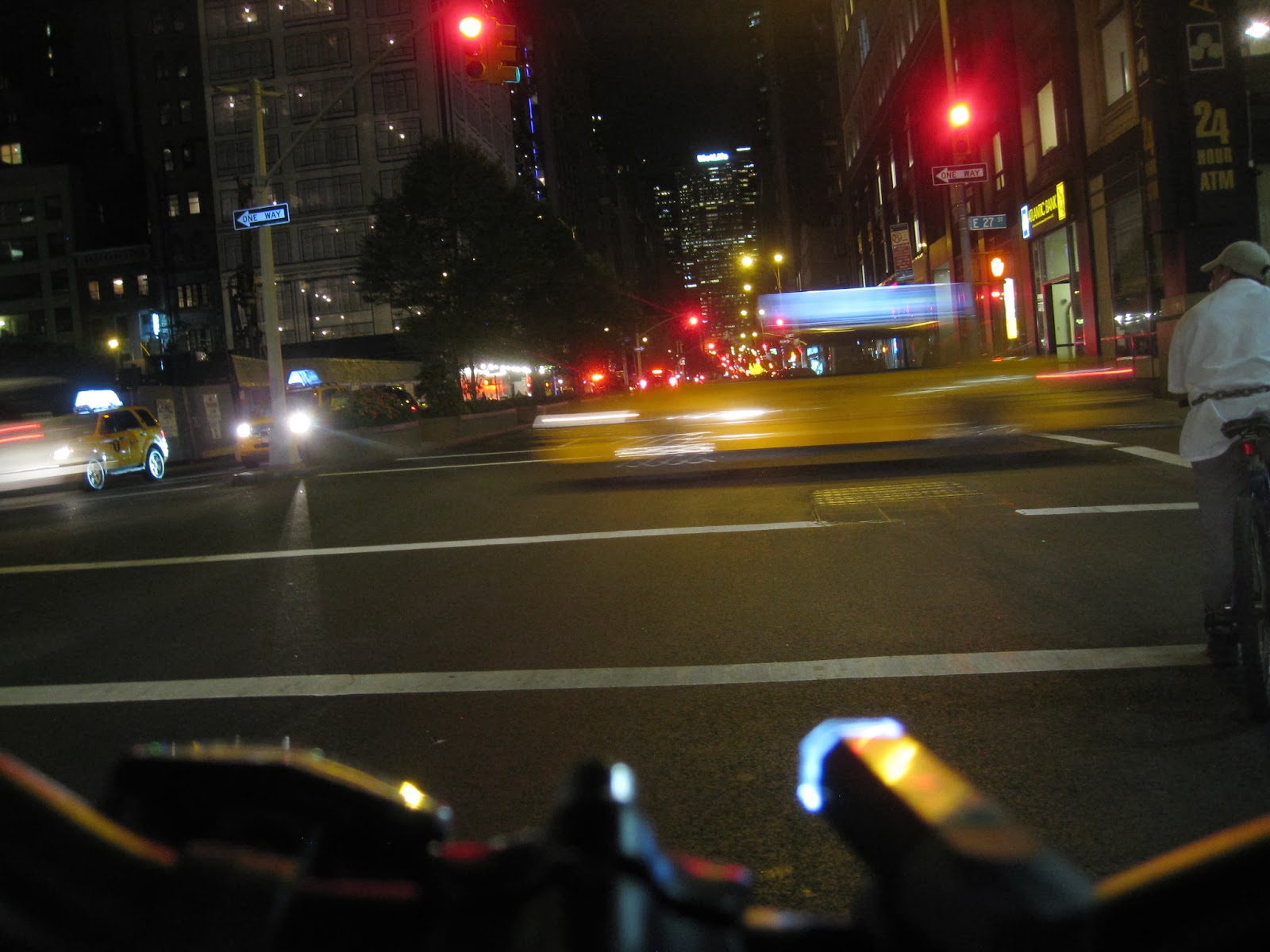