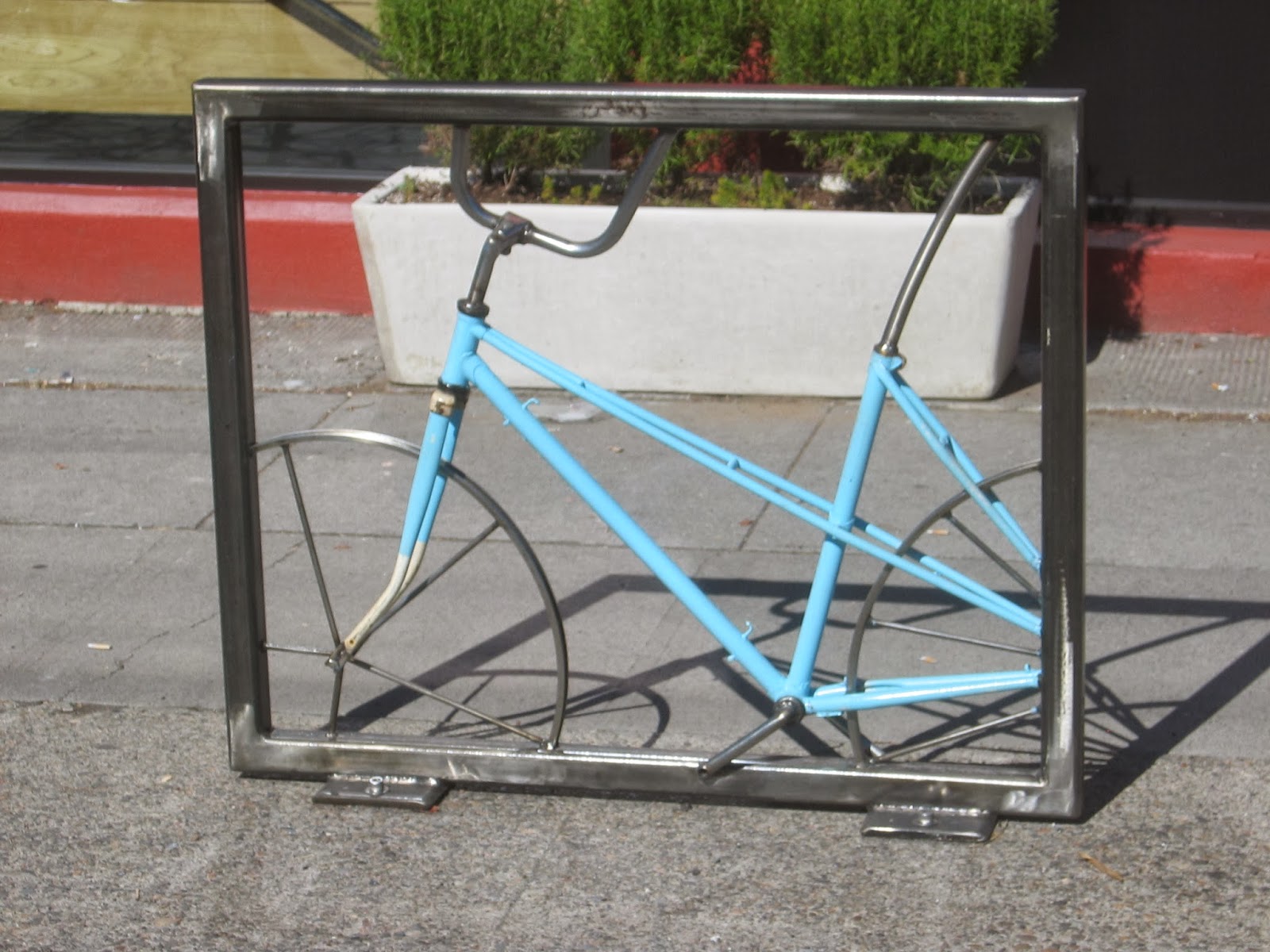 Yesterday, I rode my Dahon Matrix to the bank. When I got there, I locked it to an ashtray/trash can hybrid by threading the cable lock through one of the pillars near the top.

And I thought absolutely nothing of it. Until about an hour later, after I got home.

You see, I was going through the results from the Stamford Share the Road survey, which is a consulting project of sorts I've been doing for People Friendly Stamford. It's an online survey I designed to get feedback on a number of proposed bike lane and sharrow projects in the city.

Every time I build a survey I always add an open-ended question at the end just to see what would happen. Sometimes I learn absolutely nothing. This time was different.

The question was: is there anything you want to add about bike infrastructure issues in Stamford?

The most common complaint was the lack of bike parking. 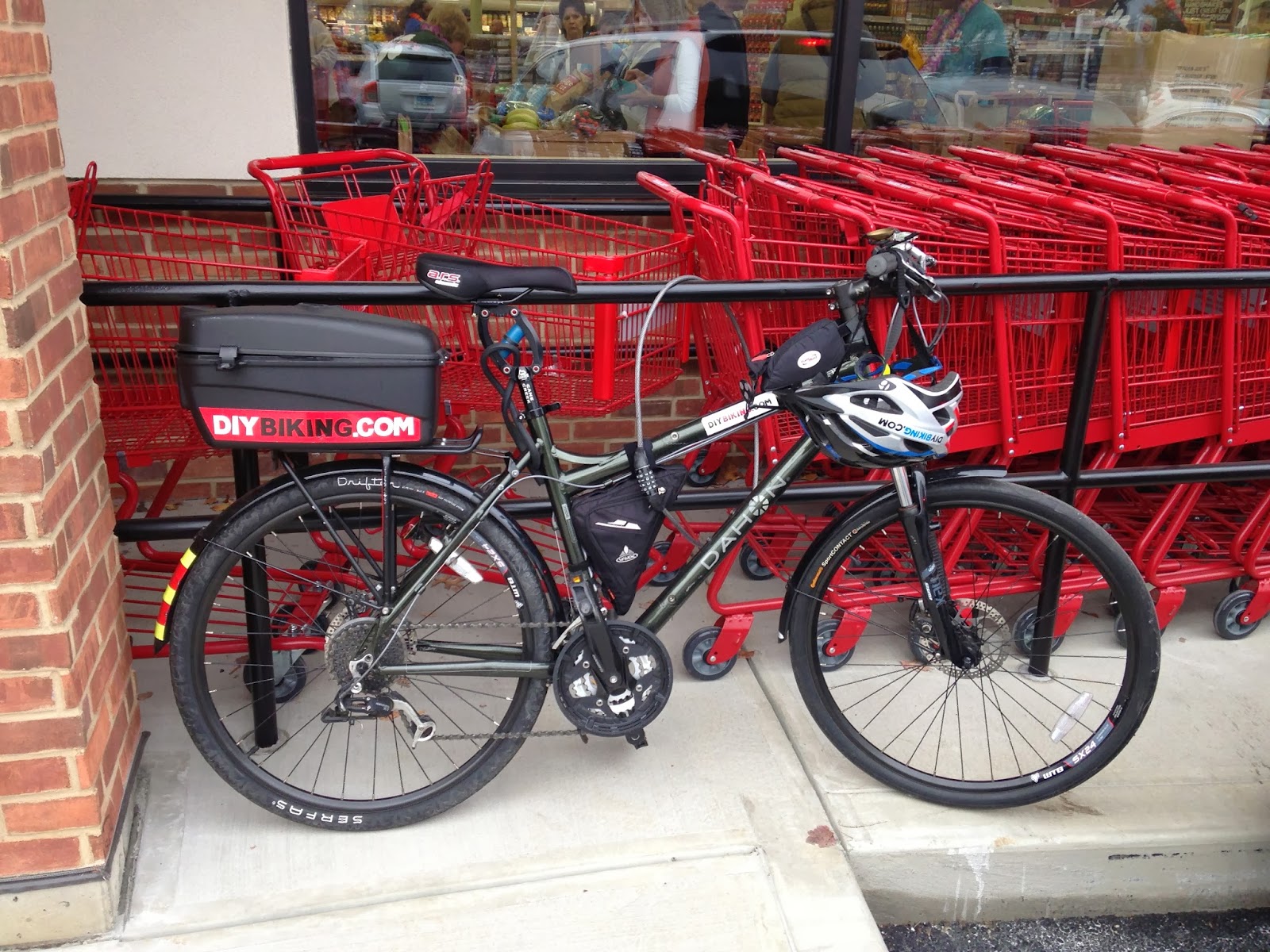 That's my bike at the new Stamford Trader Joe's, which moved into the old Border's bookstore building. I went there during the first week, and I winced when I locked the bike up against the rack where they corral shopping trolleys: it looked like the paint had just dried on the black railings.

Inside, I bumped into the manager and suggested he add a bike rack outside. I need to suggest it again and hope more do the same: the miserable time vampire that is High Ridge Road in Stamford (more on that in my Stamford Patch column) keeps me going elsewhere most of the time.

So the survey findings are making me think about bike parking, and it didn't take long for me to browse through some of my 17,468 photos* for me to look at bike parking around the country.

For the most part, finding a place to lock up usually involves something that is solid enough not to cut through, but not too big around for me to thread a cable lock around, such as a tree in front of Time Warner Center. 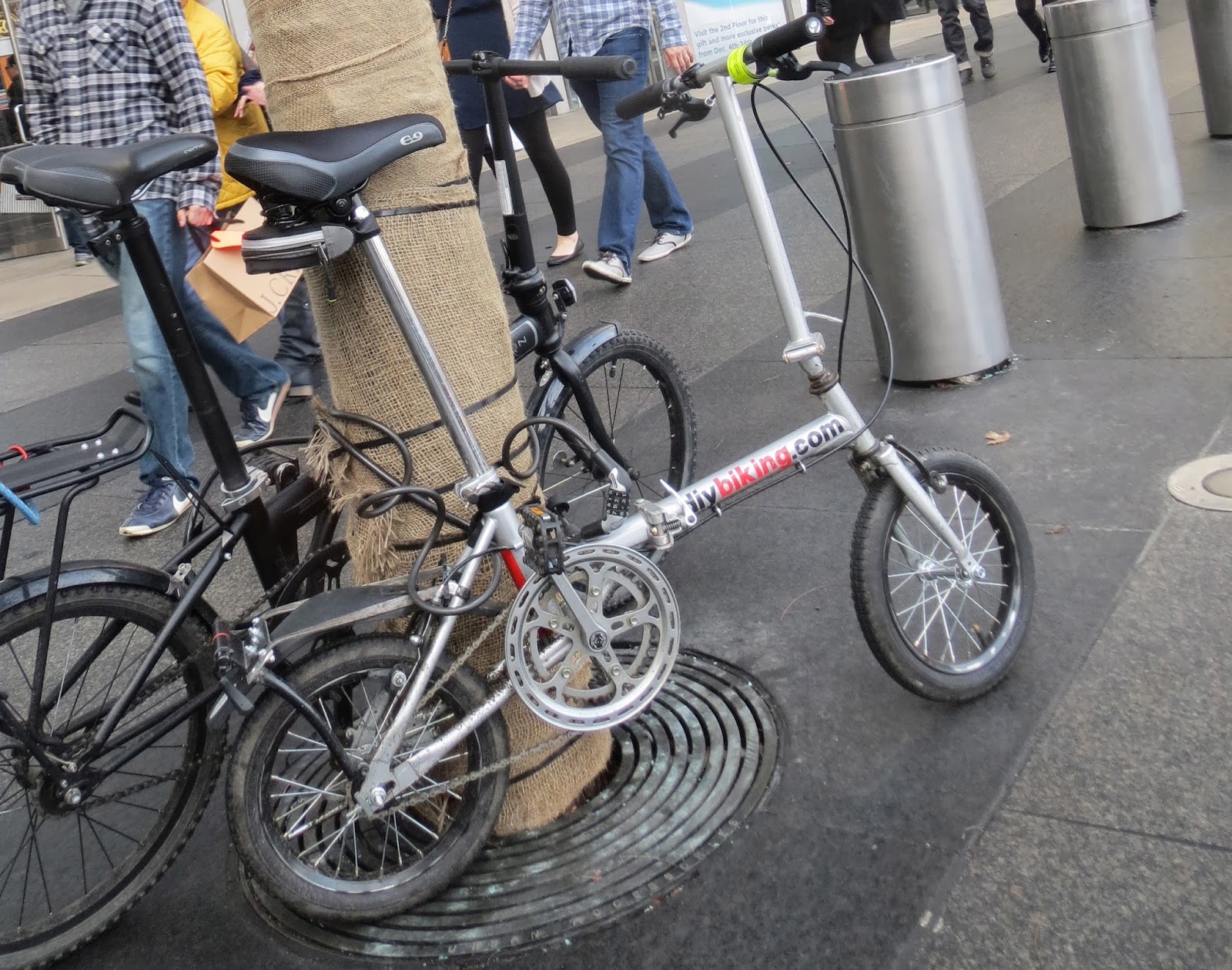 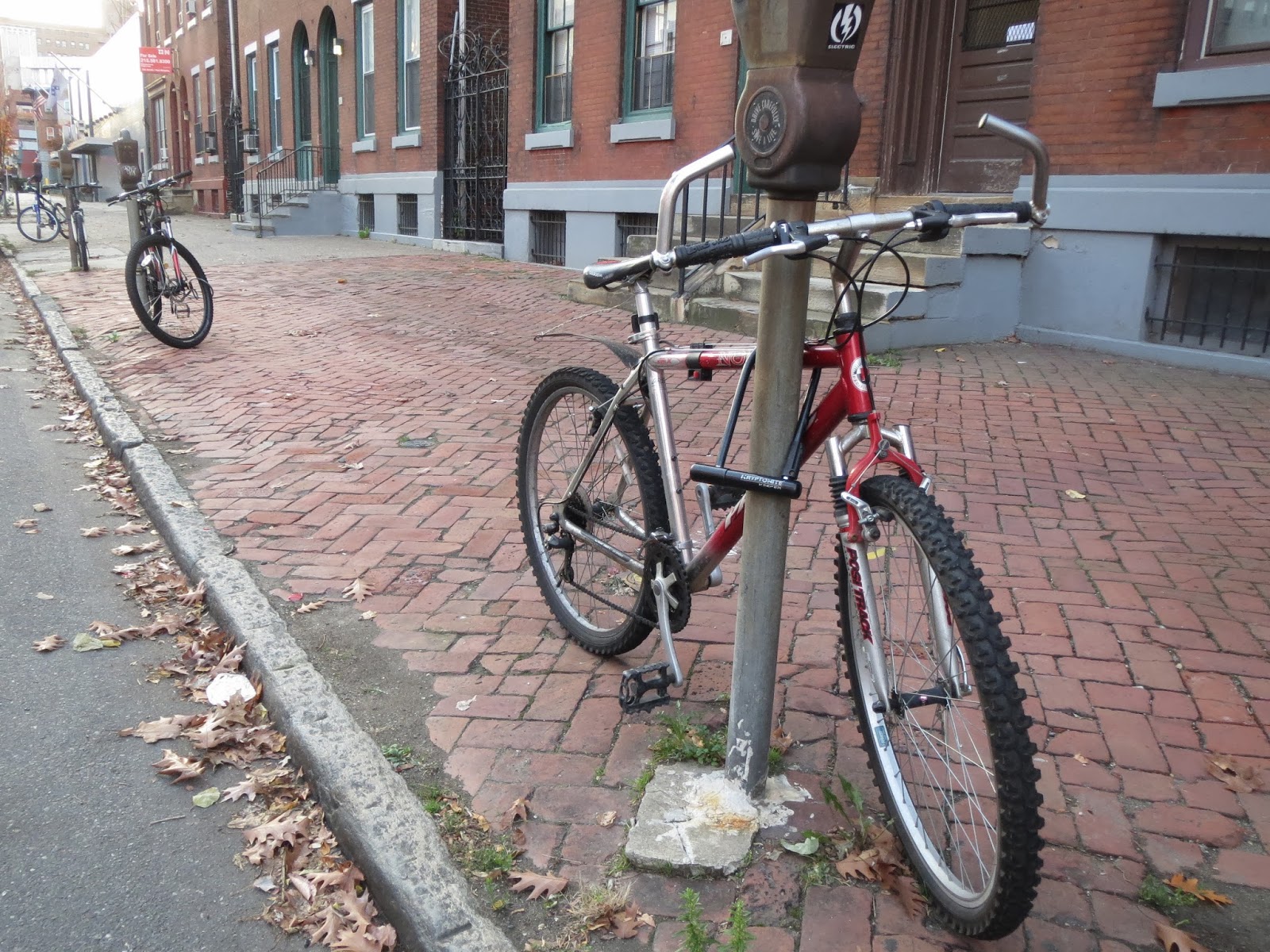 In some places, bike racks are available but lack in style, such as this example in Manhattan. 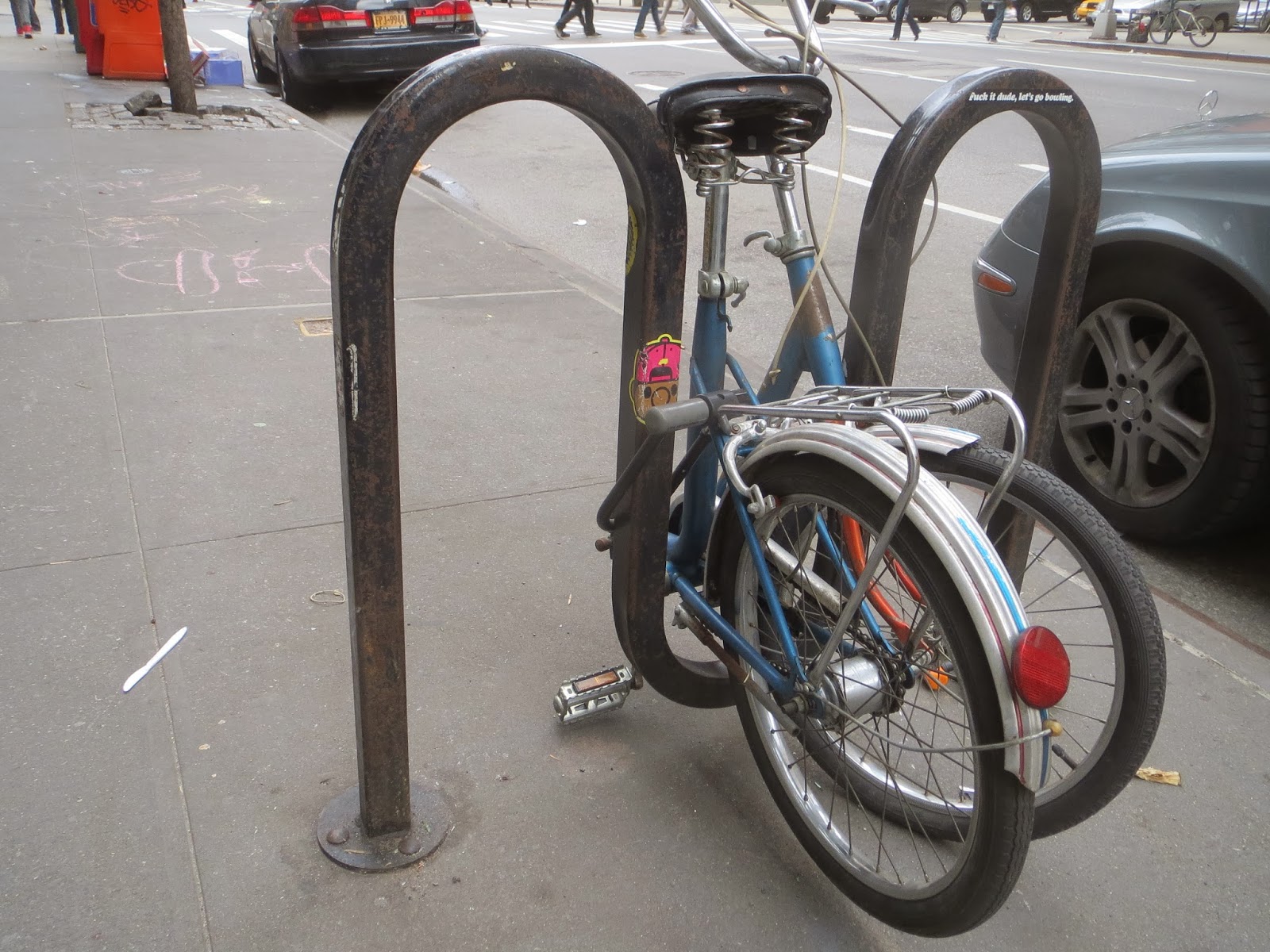 Of course, you can't talk about bike parking and style without mentioning Cleveland. Who can forget the ingenious use of a shipping container near Nano Brew? 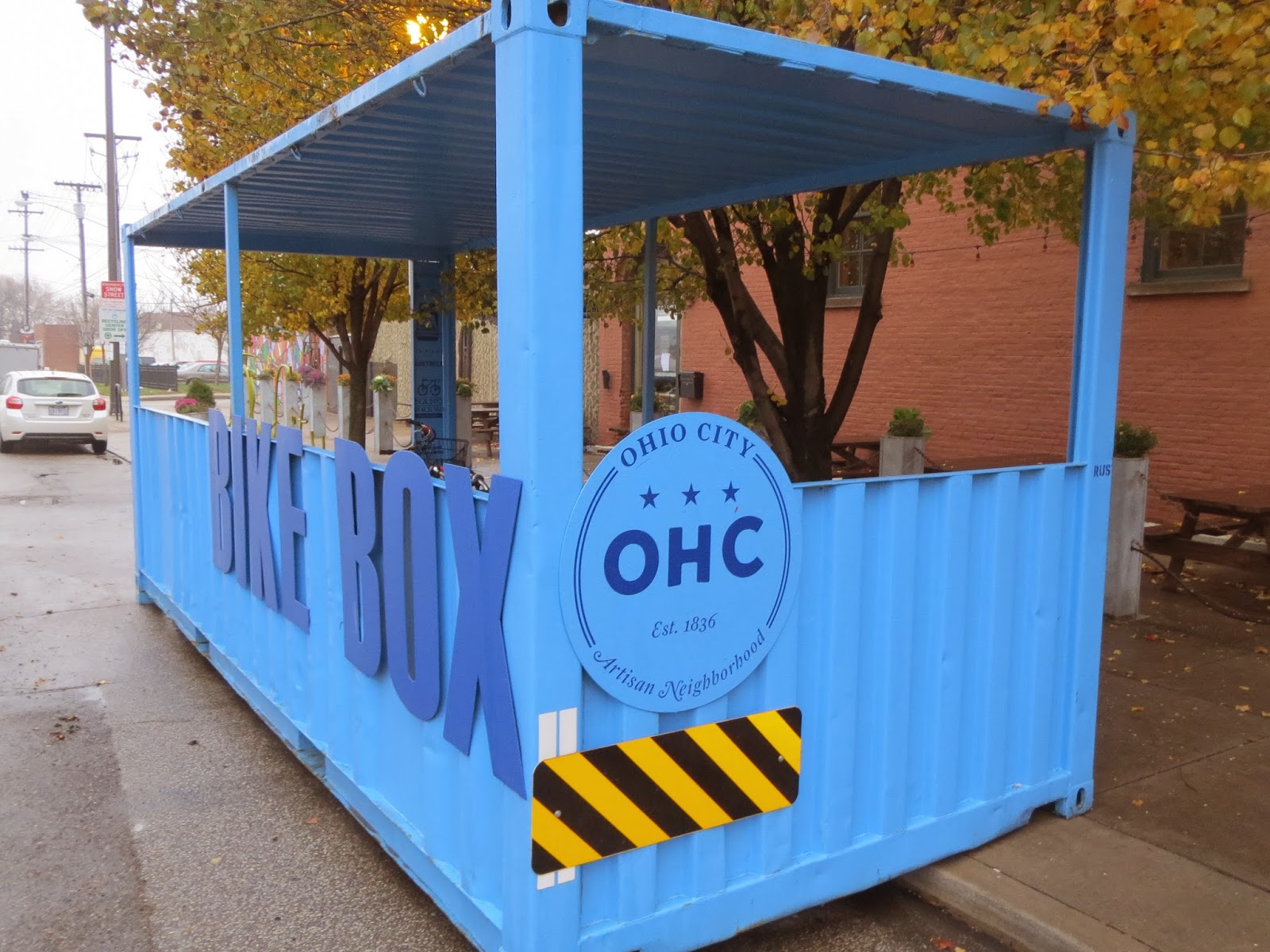 I've had the pleasure of locking there a couple of times. It's just brilliant. 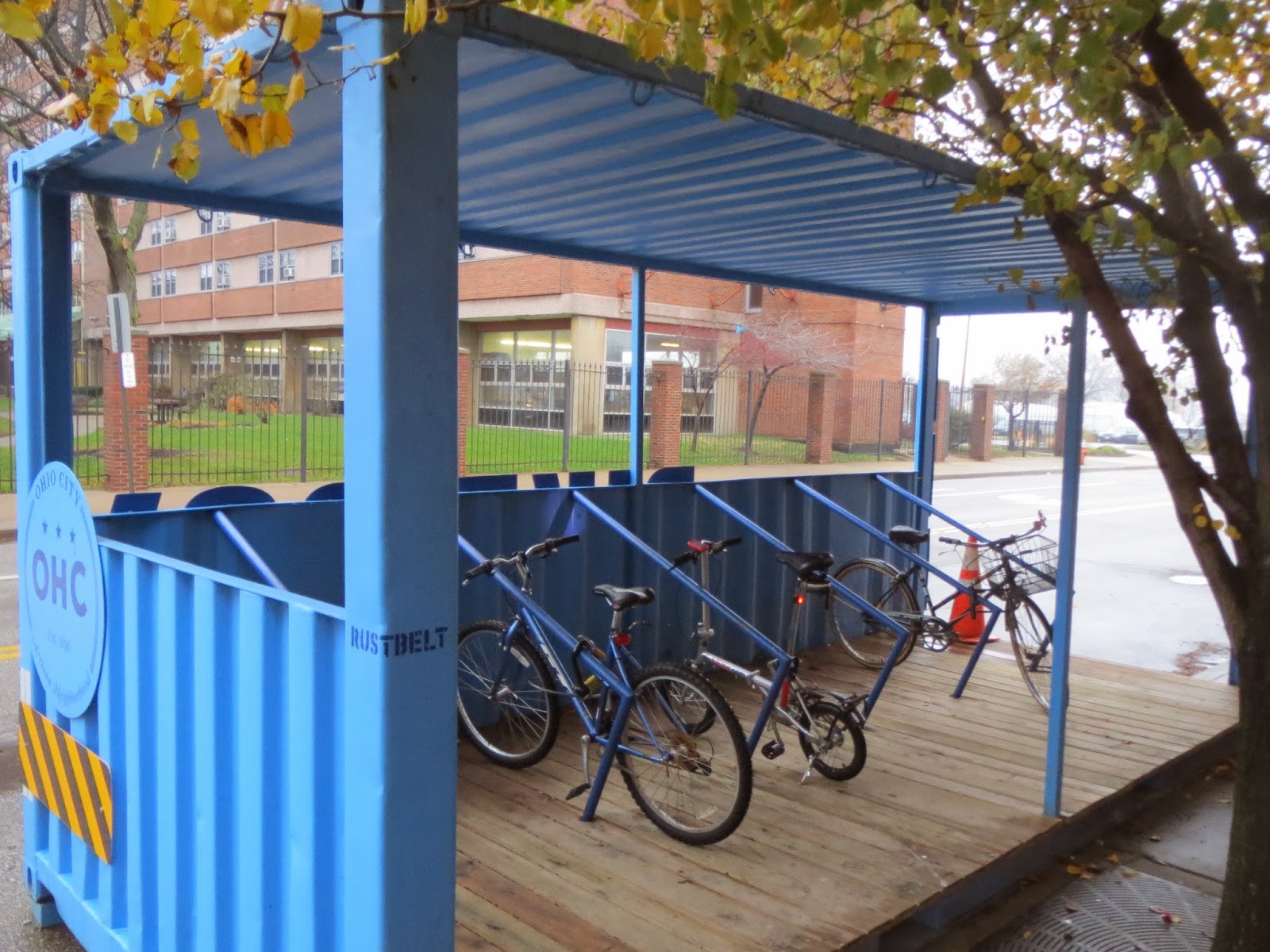 I believe that when some of these were designed, they were thinking about what would be so beautiful that nobody would want to lock their bike to them…and then they backed off from there a little bit. Very inspirational. Visit Cleveland. 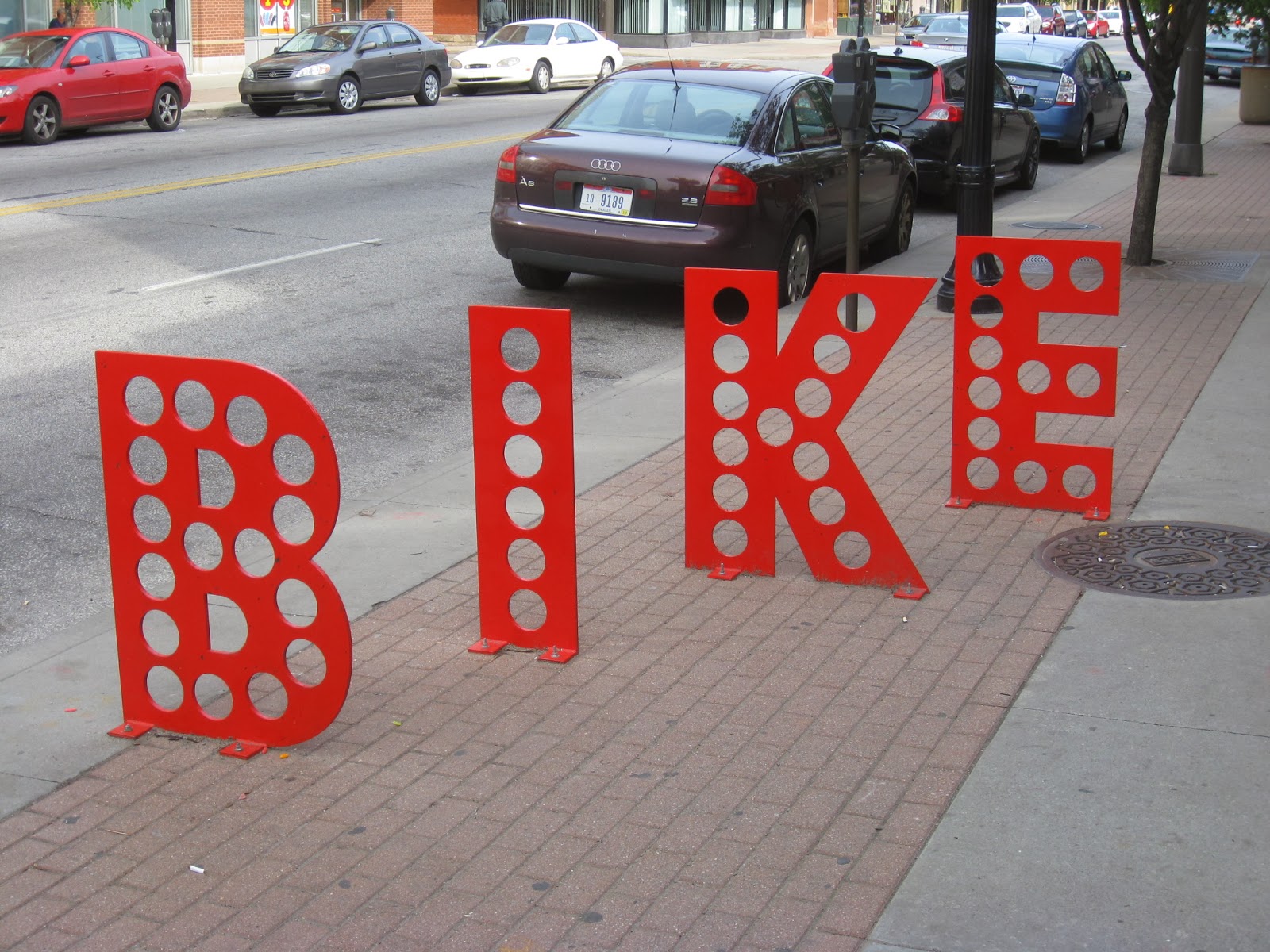 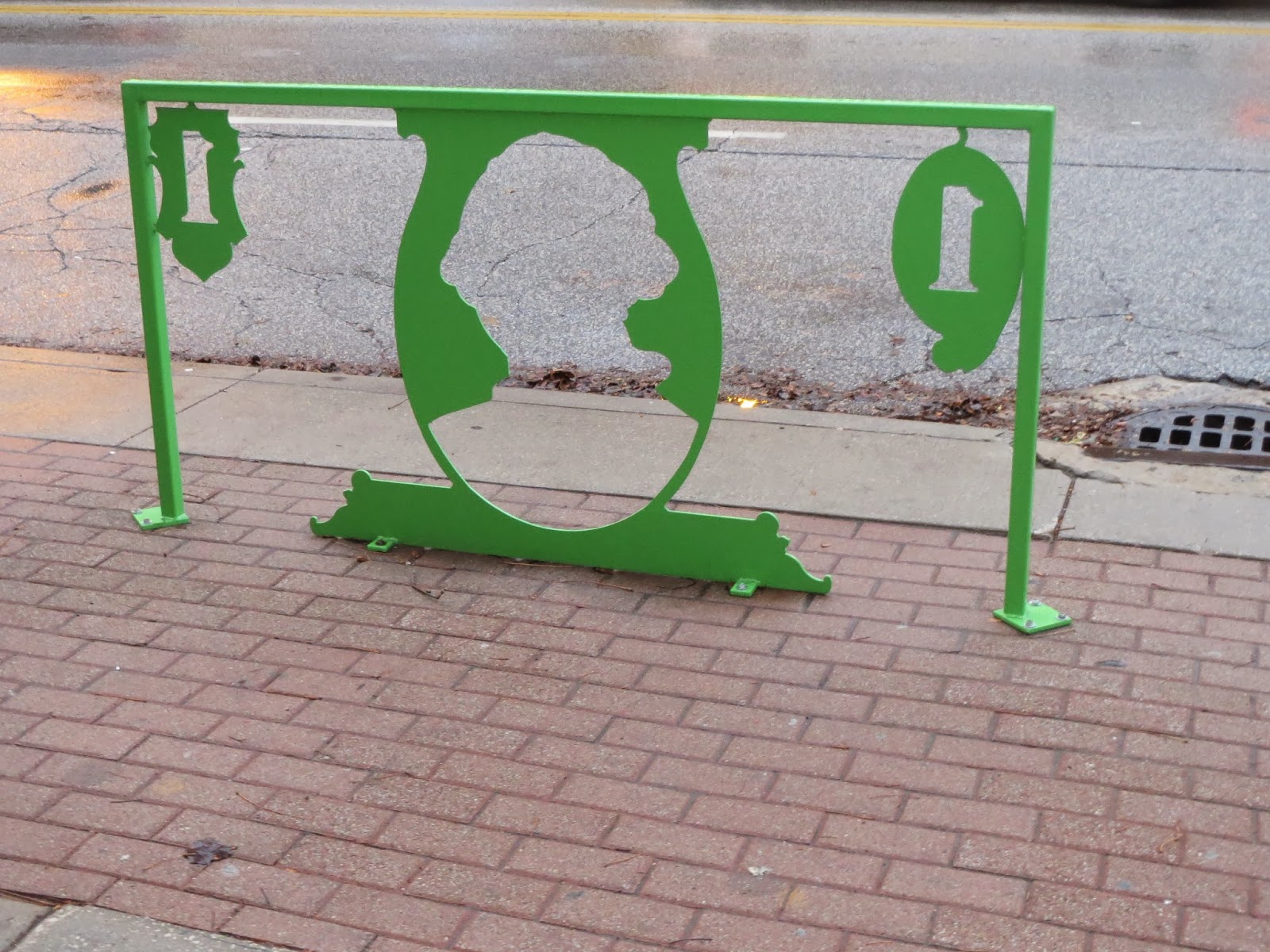 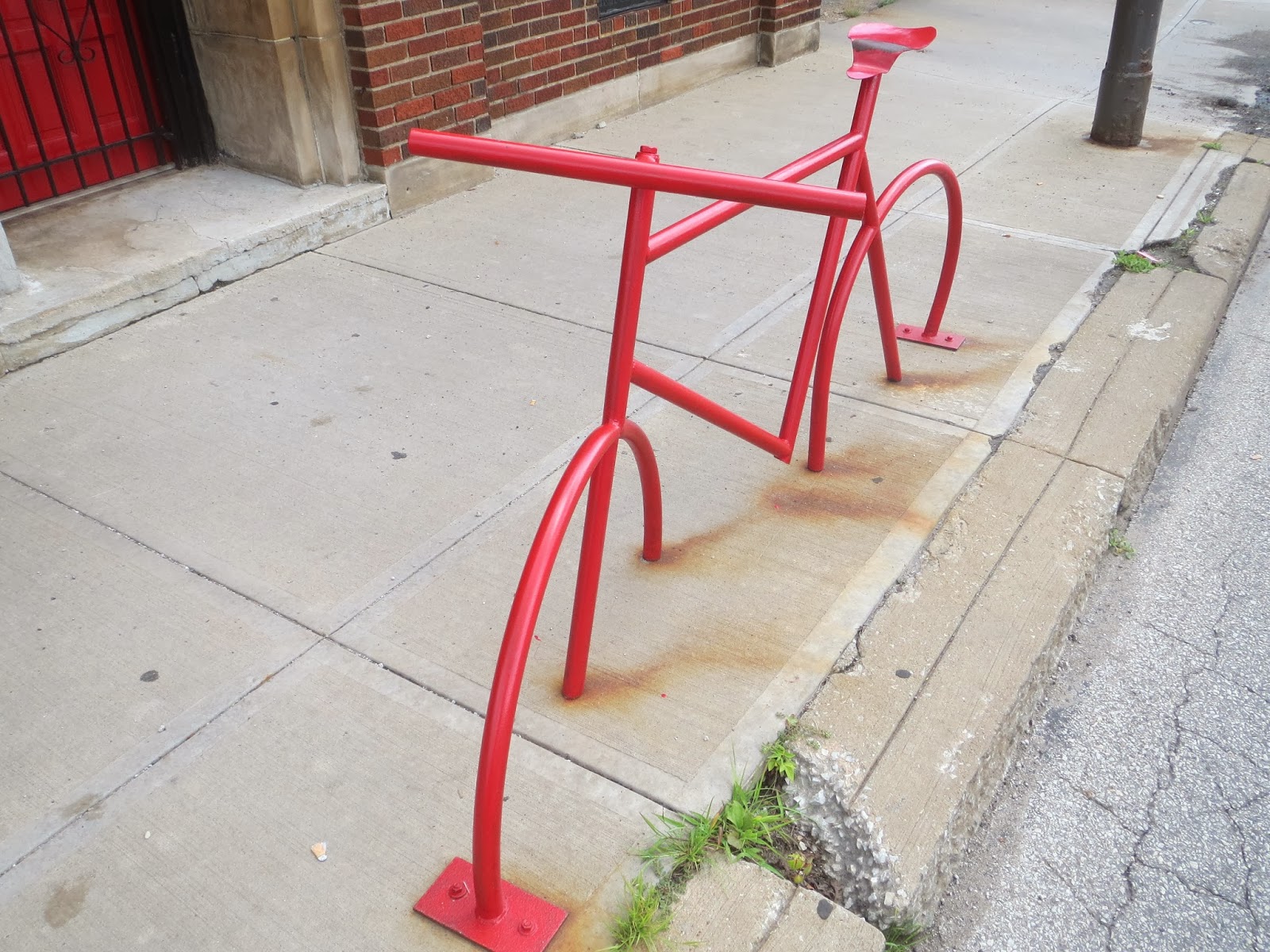 But in my part of the country, it doesn't feel like bike parking is taken that seriously. If there is a place to lock up, it's often just an afterthought. Take Zumbach's Coffee Roasters in New Canaan, for example. The first time I went there the place was filled with cars (no easy feat since there isn't much parking) so I chose the most obvious place to lock up. 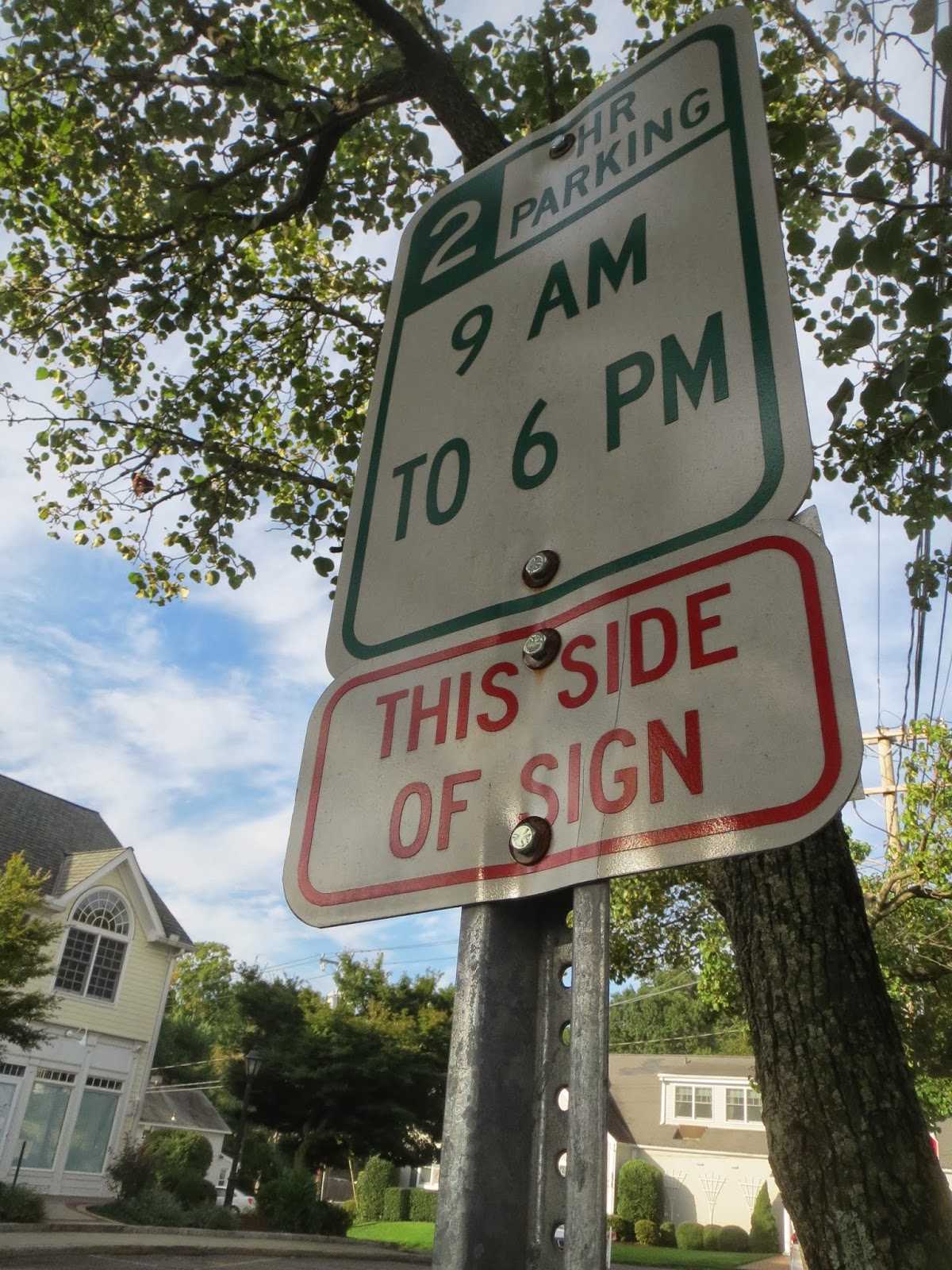 When I got my drink, I went to the side of the building to sit at one of the small, round tables outside. I just happened to glance to my right…and I saw this near the garbage cans. 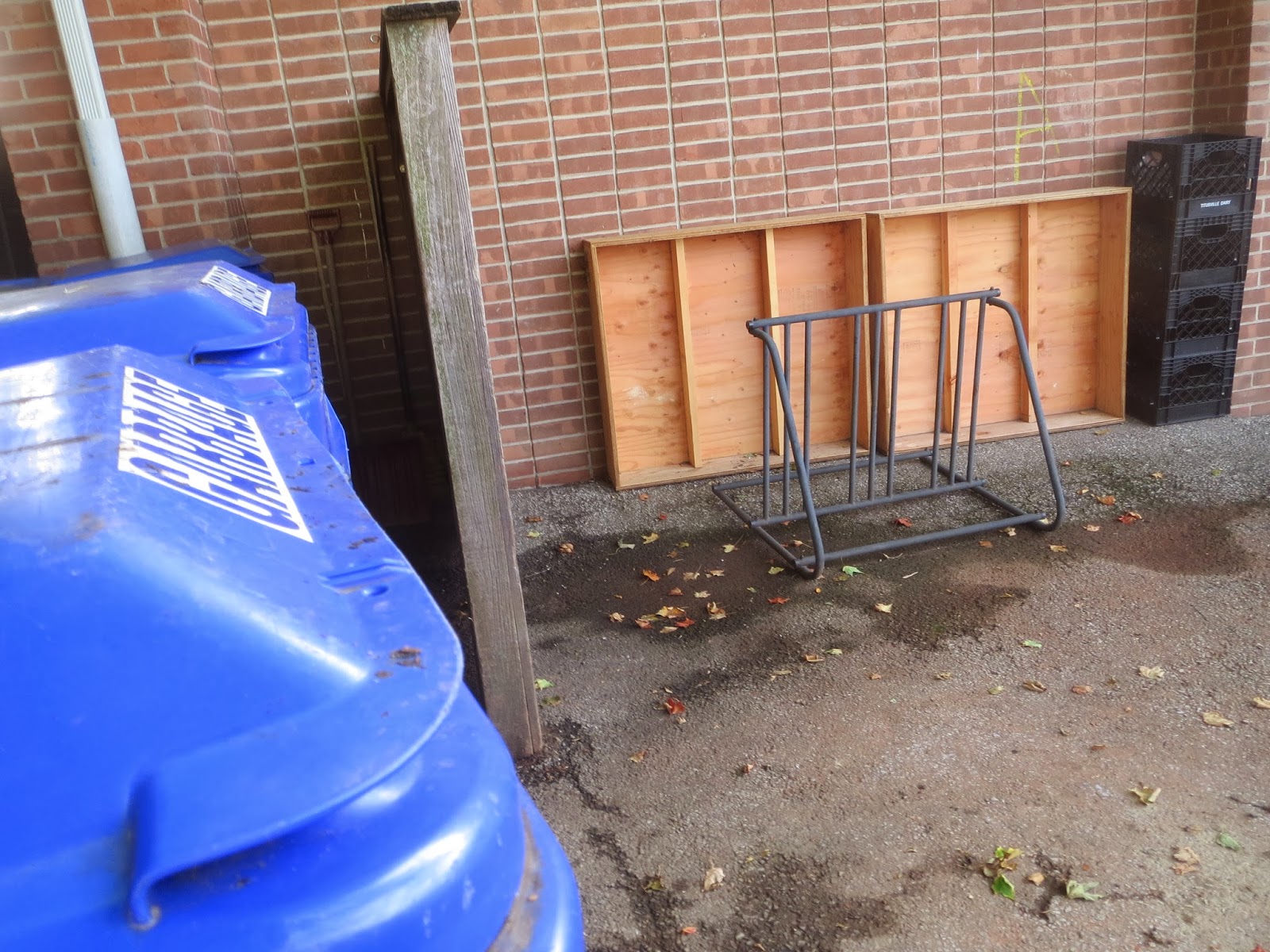 I didn't know if it was a bike rack or simply sitting over there because they were throwing it out anyway.  I kept my bike where it was and sipped my coffee, watching two-ton wheeled Tetris blocks gently move in and out of the parking lot without hitting each other.

Now as some of you know, I was at last week's public hearing on a plan to get rid of part of one of Stamford's few bike lanes on Washington Boulevard. When I posted about that before Christmas, I noted there was room for twelve cars to park. At the hearing I learned the bike lane was going to be irreparably demolished for seven.

My hope when the survey results are published on the People Friendly Stamford site and the weather finally gets warmer the city will think intelligently about putting bike parking in. As Cleveland and Portland show, it can be done in a way that is artistic and fits in to the character of the city. For instance: Stamford was once the home of Yale & Towne, which made locks. A bike rack that looks like a classic Yale lock practically designs itself.

And I'd love for the businesses to get involved, since there's much for them to gain too. Personally, I can picture Lorca, the great little coffee and churro place on Bedford Street in Stamford, dumping the car parking spot right in front and replacing it with a brilliant bike rack. Not only will people use it, but it'll make Lorca easier to see when you drive by it since there won't be an ugly Kia blocking the view. 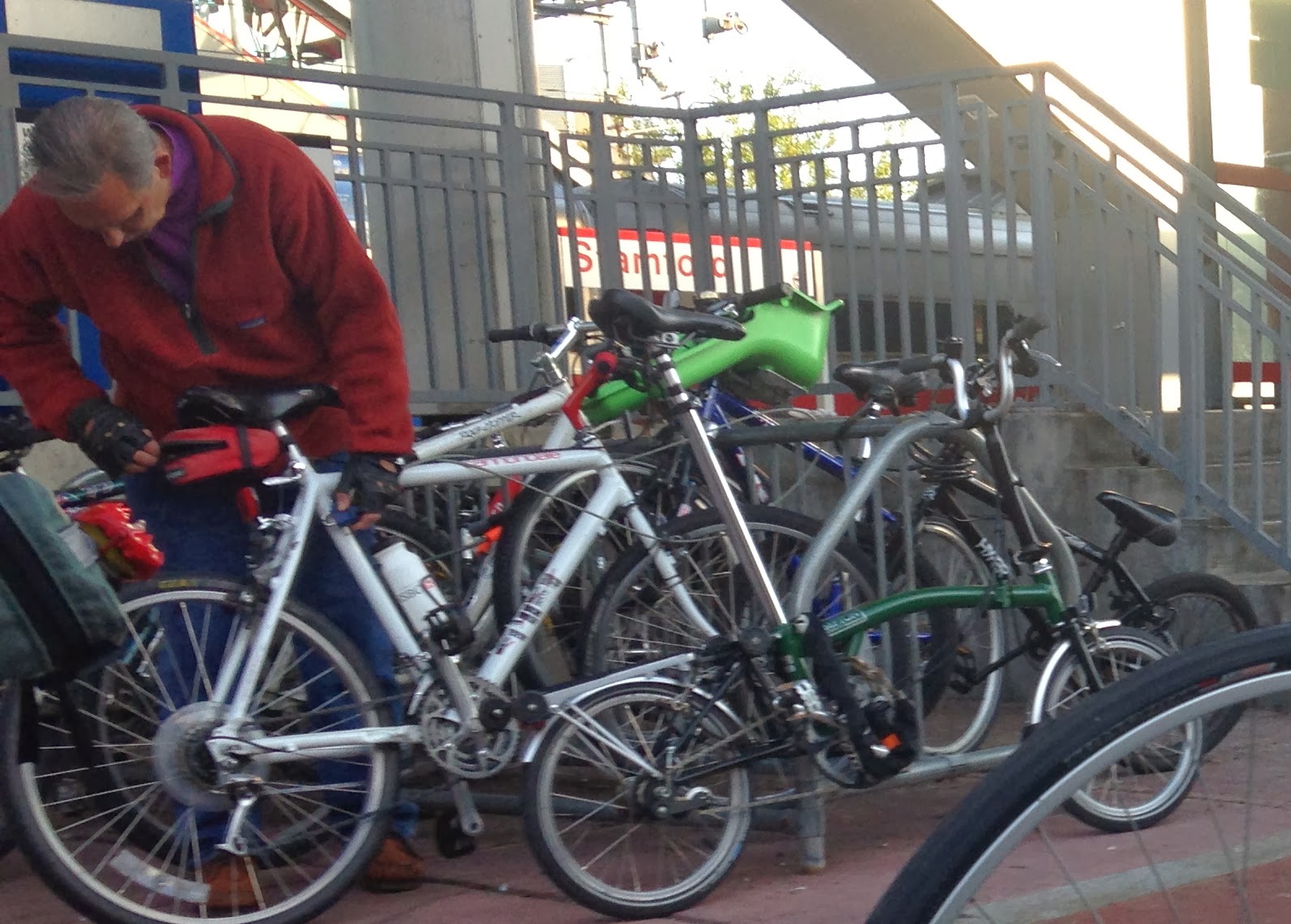 There were complaints made about the bike parking options at the Stamford train station (pictured above) and something needs to happen there too. If you park there, I recommend you complain and complain loudly. I will do the same. Also: go out of your way to thank businesses and organizations in this and other cities that do put bike racks up - and make a show about rewarding them with your business. Ask to see the manager and explain to them that cyclists spend money, and if they can't park near the store or restaurant they like, they'll spend money elsewhere. I'm hoping the next time I write about this, I'll have something happy to report about the state of bike parking in Stamford. Thanks for reading and thanks for riding.