When in Philadelphia: Places To Go During & After Philly Bike Expo 2013 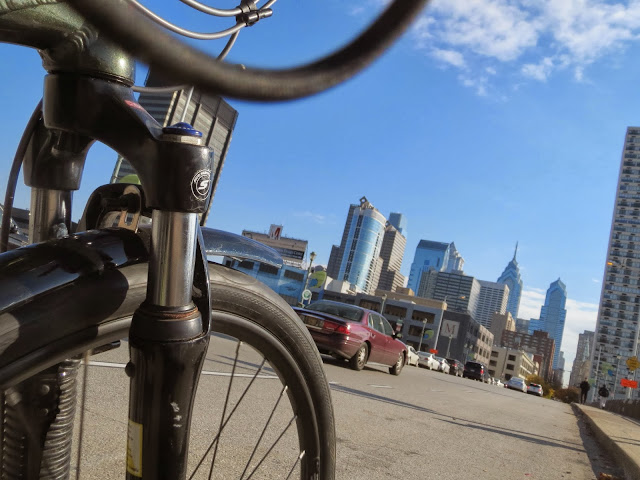 I am pleased to report to readers attending Philly Bike Expo 2013 that I am your unofficial Advance Man for the city of Philadelphia - as I have been riding there the past two days.

Now this is the fourth year of Philly Bike Expo, and its first year at the convention center. It begins at 10:00 this morning (Saturday, November 9th) and concludes tomorrow. I know getting a bike on Amtrak isn't as easy as it should be, but if you are within driving, riding or transit distance, you should find a good reason to go.

This of course begs the question: what else am I going to do when I'm in Philadelphia? Loyal readers, based on the last couple of days of travels on the faithful Dahon Matrix, I have some ideas that aren't just useful for Philly Bike Expo 2013 weekend, but anytime you're in Philadelphia.

The first thing to understand about Philly is that it has some similar traits to  Boston - narrow streets and so forth - but great strides have been made as you'll find bike lanes fairly often - particularly near Penn and Drexel campuses. 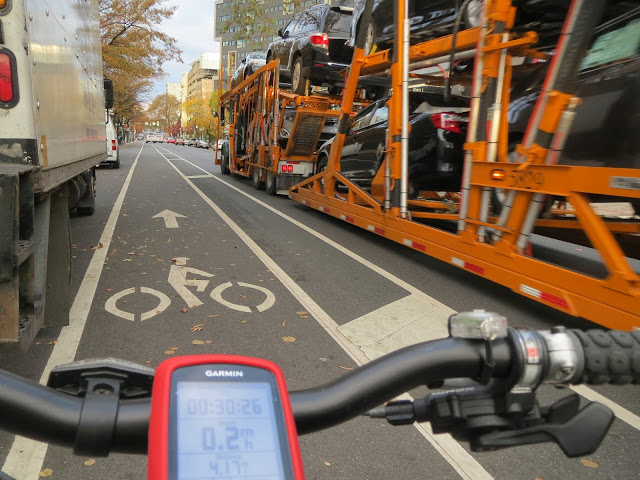 As always, I recommend you follow every rule of the road and wear a helmet - preferably one with a rearview mirror. Cars seem to pass closer here than in other places, possibly because motorists are used to crowded quarters.

When you arrive for lunch or dinner and want Mexican food, the place to go is, hands down, Distrito, which is located at 3945 Chestnut Street. 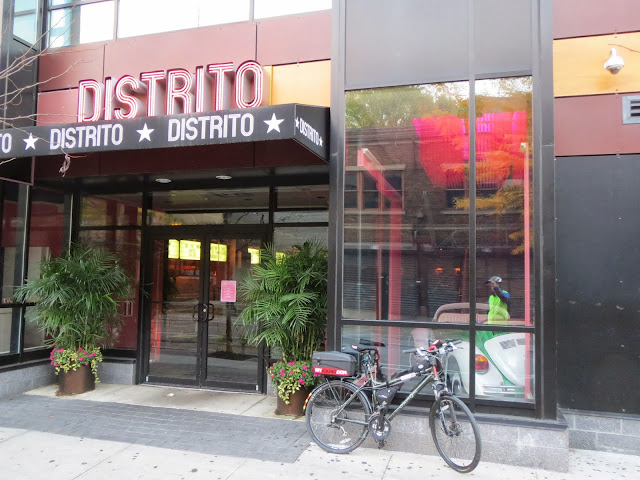 I ended up there for lunch on Thursday. The pork tacos with pineapple salsa is the kind of food that makes you smile to yourself and say: "This is why I'm not a vegetarian."

It's also a fun place - an institution of sorts to a lot of University of Pennsylvania students and alumni. Note the Volkswagen Beetle just inside the window that has been converted into a diner booth. Very Pulp Fiction/Jack Rabbit Slims.

When riding after a great meal like that, you'll try to put your finger on the mood and the vibe of Philadelphia. It's not easy to do. It's definitely not the easiest city to navigate since, like Boston, streets aren't set up in the grid pattern like New York. And unlike London, if you get lost you can't ask for directions from people who have (real) British accents.

At times, Philadelphia reminded me of that woman from the episode of 'Seinfeld' that Jerry dated who looked beautiful most of the time but not so much in certain light. Here's what I'm talking about. 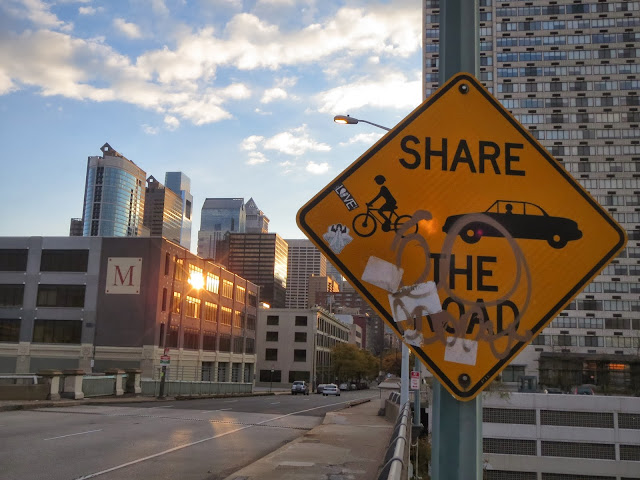 See what I mean? Can't you just picture Bruce Springsteen wandering nearby and morosely nearby singing something about the 'streets of Philadelphia?'

However, if you look down and to the left from the exact spot where this picture was taken, you'll see this: 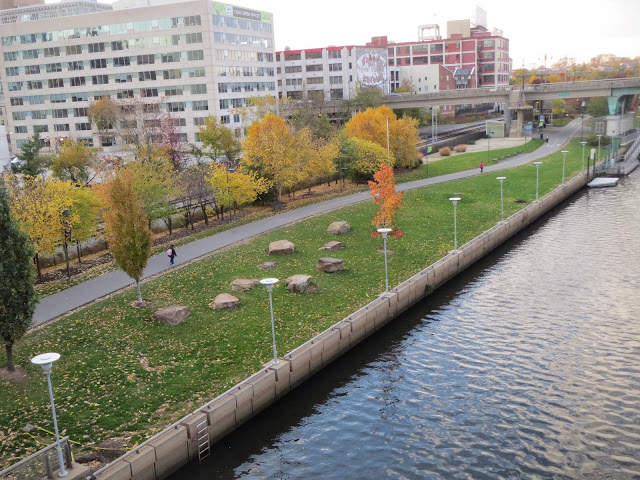 This is the Schuylkill River Trail, which is a hard trail to spell but an easy one to love as it will eventually span about 130 miles. When you're in Philly you should ride it. Just like that, you go from Springsteen's 'Philadelphia' to whistling the theme from 'Rocky.' 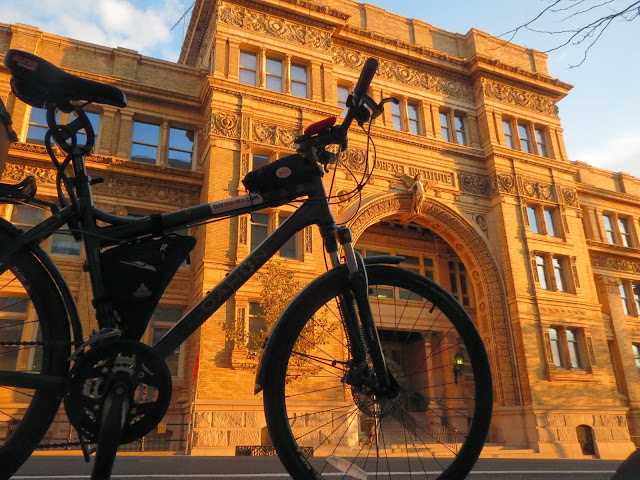 Also, If you're lucky enough to ride aimlessly, you'll know when you reach the historic parts of Philadelphia because you'll hear a random person on the street explaining to his or her young child that 'this corner was where Benjamin Franklin threw up on Thomas Jefferson's shoes' (or something) but also you'll face my old nemesis: cobblestones. 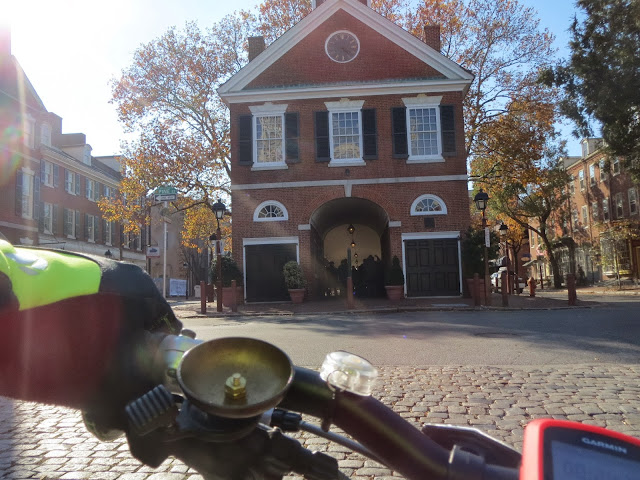 If this part of town is your thing, bring a road bike that has no suspension at your peril. 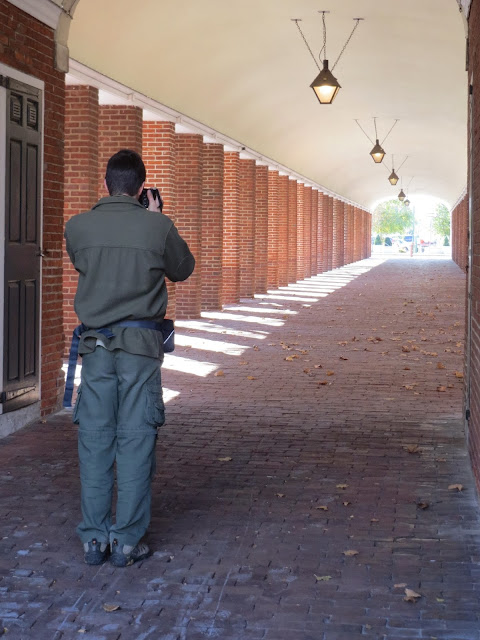 And when riding along the narrow streets, you'll admire the beauty but abhor the stoplights. However, when at a stoplight, it is important to look around and keep your camera ready, because you'll never know what you might see if you look up. 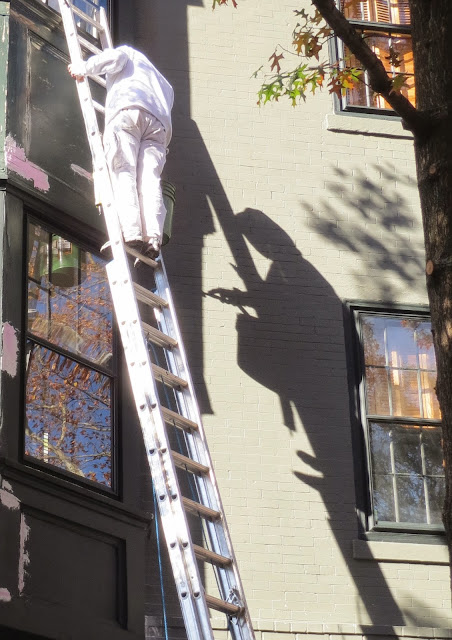 Once you get past the cobblestones and onto 2nd Street North, you'll find two places of distinction (and both will be at the Philly Bike Expo 2013). The first is Trophy Bikes, which regular readers will remember as the bike shop which gave me my first taste of the quality of Brompton folding bikes. However, since my last visit, they have moved and are now located at 712 N. 2nd Street. 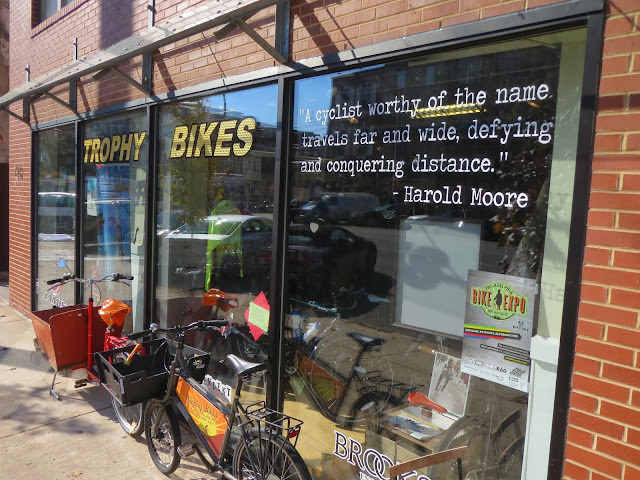 If you don't have a bike, you can easily get to this neighborhood (Northern Liberties), via the Spring Garden Street stop on the Market-Frankford El.

The nice fellow behind the counter at Trophy Bikes gave me a little tip: not only will Trophy Bikes be at the Philly Bike Expo, but they are sponsoring something to allow a huge number of riders of Surly Bikes to attend Philly Bike Expo on Sunday for free. Please check with Trophy Bikes for more details, but if you want to buy a Surly, their store has the following: 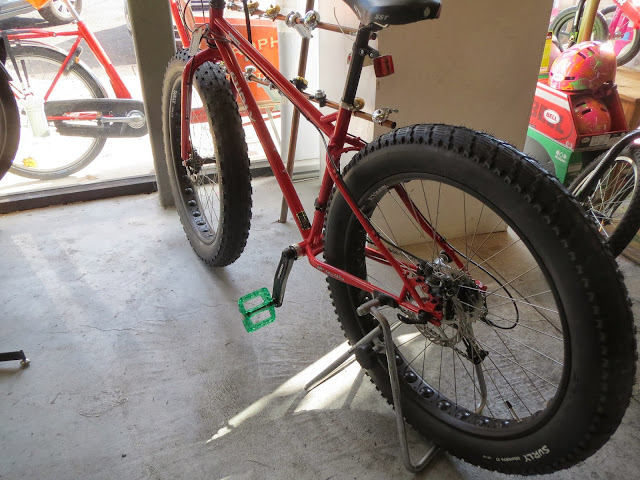 Were Batman to build a green version of the Batpod, this is how he and Alfred would start. The enormous tires are the distinctive feature of the Surly Pugsly, and it is ready for the cobblestones.

If you prefer a cargo bike, you can always weld one yourself like I did or you can pick up the Surly Big Dummy, which is complete with disc brakes. 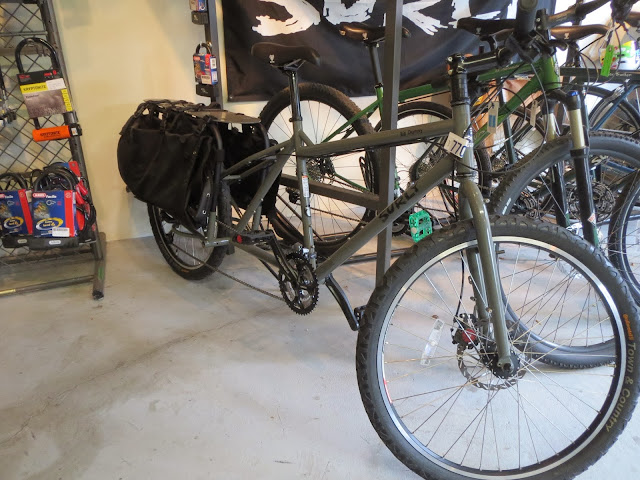 You can also buy a Brompton there...or a $10 Trophy Bikes T-shirt if your budget is tight (like mine is).

Not far down 2nd street is R.E. Load, which is a custom messenger bag company founded by a couple of bike messengers in 1998. 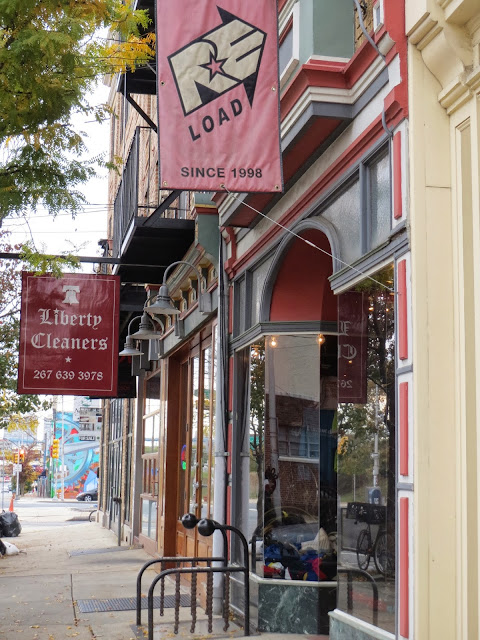 What makes this place extraordinary is that they make messenger bags - both custom and not - right there. As in, ten feet from where they are sold. That's about as local as it gets. 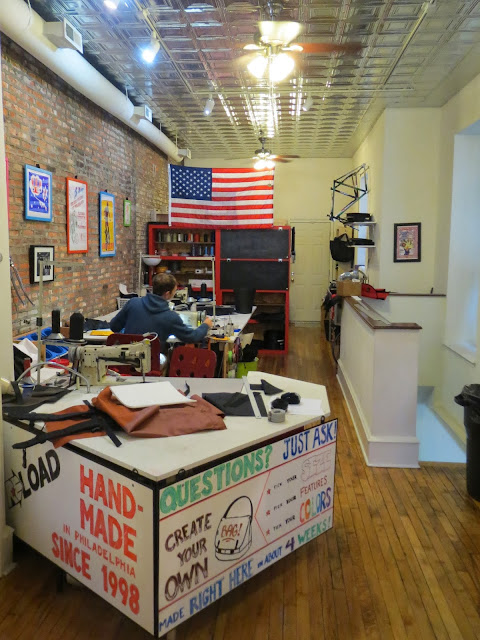 As my preference is for the better bike box, I didn't buy a bag, but my wife did. Like Trophy Bikes, you should visit them at Philly Bike Expo and at their shop on N. 2nd street.

Now if you are on your new Surly, or Brompton, or any other kind of bike for that matter, you can also treat yourself to baked goods at The Restaurant School at Walnut Hill College. 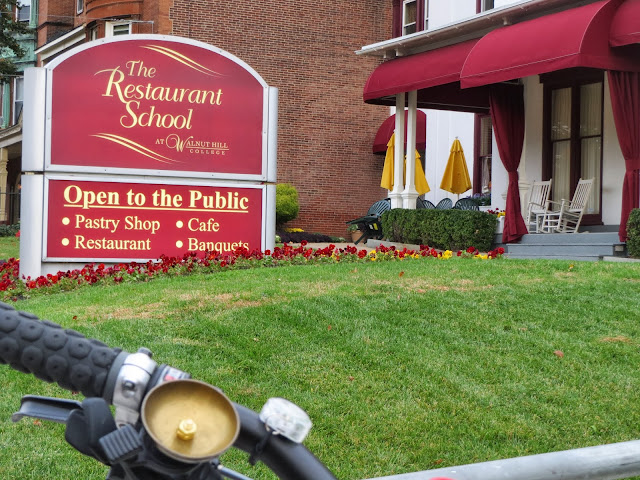 My first morning in Philly, I parted with $1.35 to buy an excellent muffin - it had something to do with walnuts and apples - that was made by a student at the college. That student or student who made said muffin is going to go on to great things. 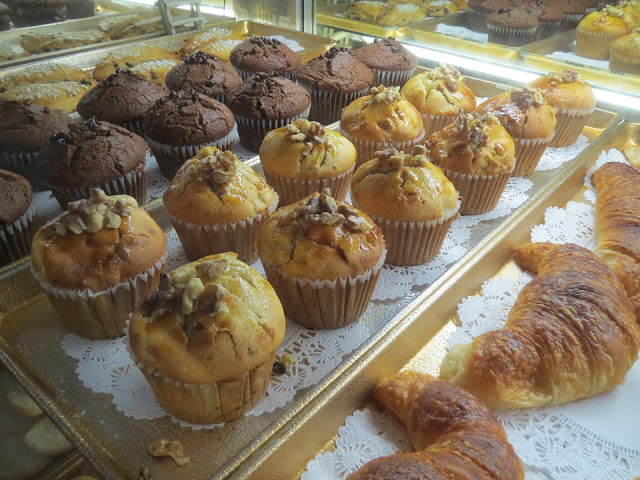 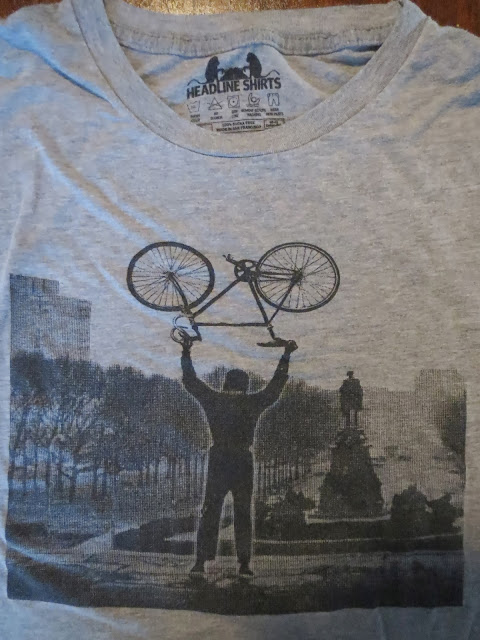