Biking Nations: Back to London (which had CitibikeNYC first) 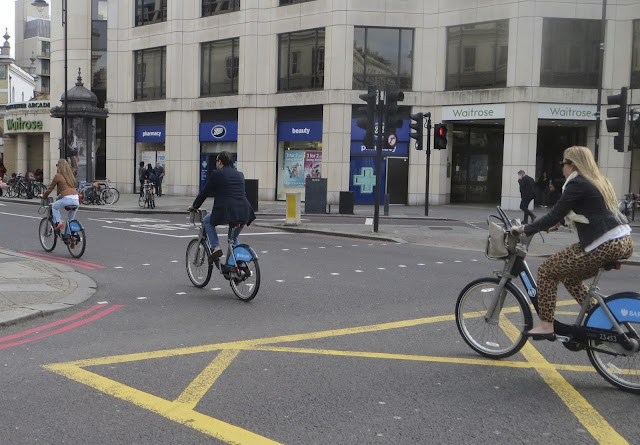 Yes, I was in the UK once again for both work and vacation. As I knew the work part would involve an array of suits and staying in small hotel rooms, I once again reluctantly left the Bike Friday behind.

But if you are in London without a bike and from out of town, you are in luck because of the Barclay's bike system (sometimes called 'Boris bikes' - after the mayor of London, Boris Johnson - and I suppose that nickname is to Barclays Cycle Hire what 'Obamacare' is to the less-catchy 'Affordable Care Act.'). I used the system last year and realized that at 5 pounds for seven days of access was a steal at twice the price, so I wasn't at all annoyed to discover that the fee for a week's access is now 10 pounds. But trips under 30 minutes are still free and it is almost always easy to find a London Cycle Hire dock.

It also puts more bikes on the road, which is a good thing. Clearly, there are so many cars on the road in the UK there isn't enough room for all of them. 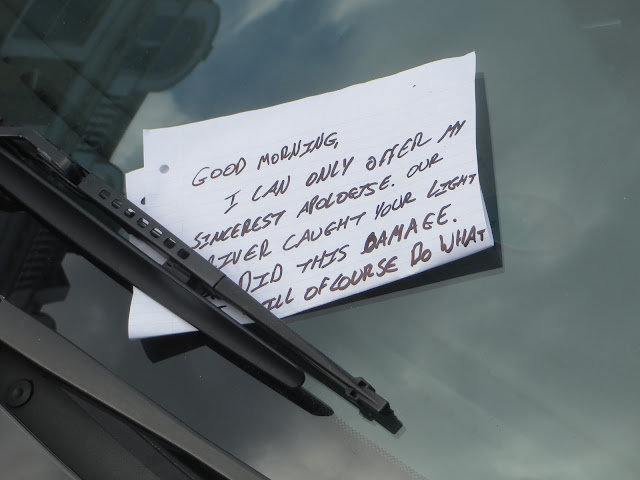 That is what it looks like: I didn't witness the accident, but noticed the person who caused it was considerate enough to leave a note (and a headlight that looked like the car had gone cross-eyed).

But back to the bike share: as some of you know, New York is joining the forward-thinking cities like London, Paris, Boston, Washington, D.C. and Stamford (just threw that last one in to see if you were paying attention) and CitiBikeNYC Annual Members Preview Week starts today. Of course if you attended Bike Expo New York earlier this month, you'd have seen the very first 'Bloomberg Bike' that is to be part of the program. 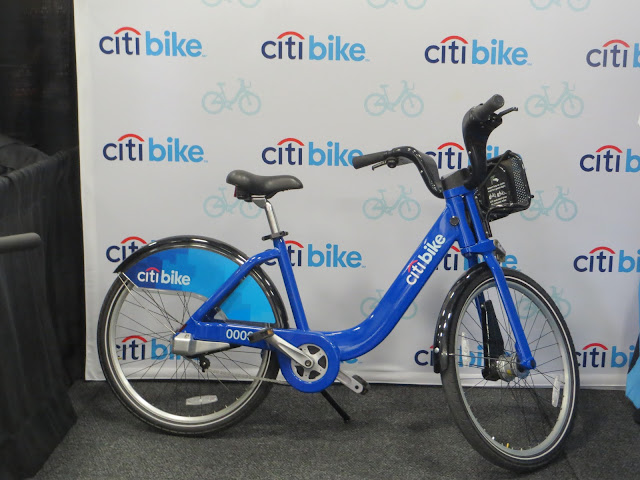 Now these bikes are made by the same company that made the ones in London. I can testify to their quality and ruggedness but it is how the system works in real-world situations that's even more important.

Here's my first real-world situation: After I ironed my suits for my Grown-Up Conference I found myself with a few hours of time on my hands, I left the hotel and, after fueling with a good lunch at Little India, took a bike from a Barclay's rack and pedaled to an interesting-sounding flea market: capitalcarboot.com, which helpfully noted that there was, in fact, a Barclay's station nearby.

So, if you are an enterprising business in New York City, you already have written where the closest Citi Bike station is on your 'directions' page on your web site.

But back to London: I wore my own helmet (the helmet-mounted mirror placed on the opposite side to remind me to cycle to the left) and, after a few wrong turns (more on the ease of doing that in a moment) made it to the station - and the car boot sale - with decent time. 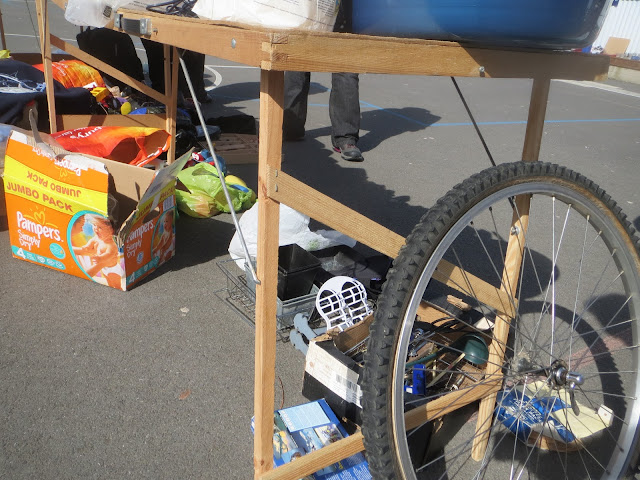 By the time the car boot sale was over, there was one Barclay's bike left (a different one than I had ridden there with) and I was able to ride it back to the station at the hotel. It was the first practical trip I had made on a Barclay bike. But it was a short trip, so I began to wonder how it would do on a longer one.

Two days later, at the end of a Grown-Up Conference Day, I got my answer as I decided on an ambitious plan: to ride from Earl's Court (the 10-pence coin) clear across London to the Cycle Hire dock near Angel (the 1-pound coin) where I would then walk a half-mile to meet an old friend and her partner for dinner at the Fig and Olive. 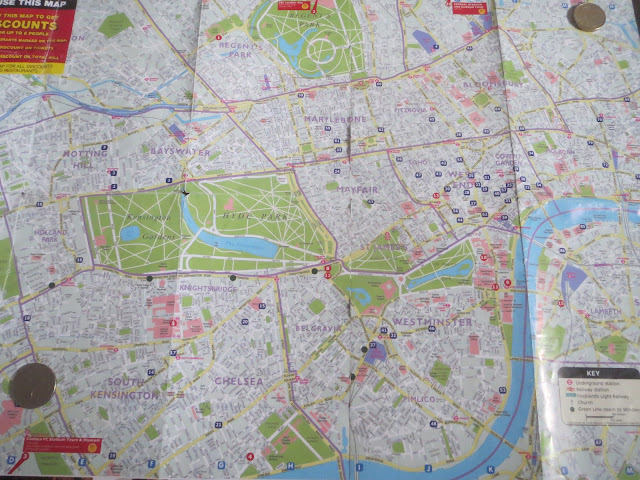 This map, published by forlessguides.com, was a great resource. If I wasn't handed this by the friendly woman behind the desk at the Radisson, I would still be looking for the Fig and Olive.

However, the London For Less map - just like a lot of NYC maps - does have a fatal flaw: it has edges. And once you are off the edges, you don't know where you are.

That happened to me, and it occurred a lot sooner than I thought. Brits didn't appear to have cyclists in mind when they laid out London back in the day, and the twists, turns, and spontaneous one-way streets thrown in as an afterthought put me off the map. The street signs are also posted on the sides of buildings, which often makes them difficult to read.

At first I didn't mind, because I stumbled across a bike shop on my way. 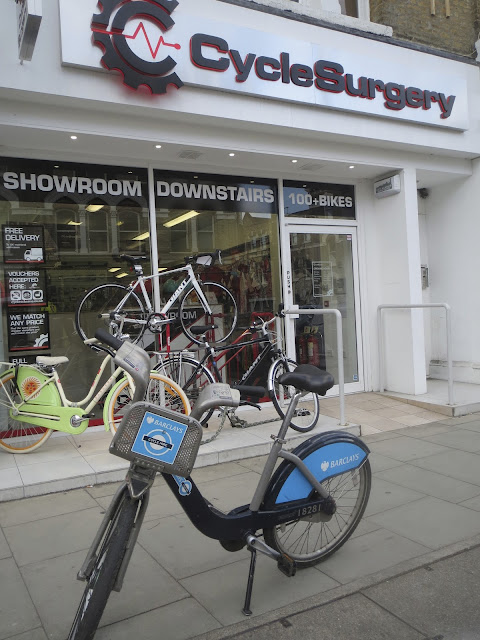 With no nearby docking station, I was able to wheel the bike inside and trusted a Cycle Surgery employee to mind it while I browsed (later in the trip I noticed a Barclay bike chained to a rail, so I guess if you don't mind leaving your bike for a moment with the 'meter running' you can bring your own lock).

So, if you are an enterprising bike shop in New York City, you'll understand that people who ride these tough little bikes may be cyclists themselves, and they may welcome the chance to shop in your store if you are willing to let them wheel your rented ride inside.

But back to London: I thanked the employee, left the shop, and continued my journey…and became quite lost. 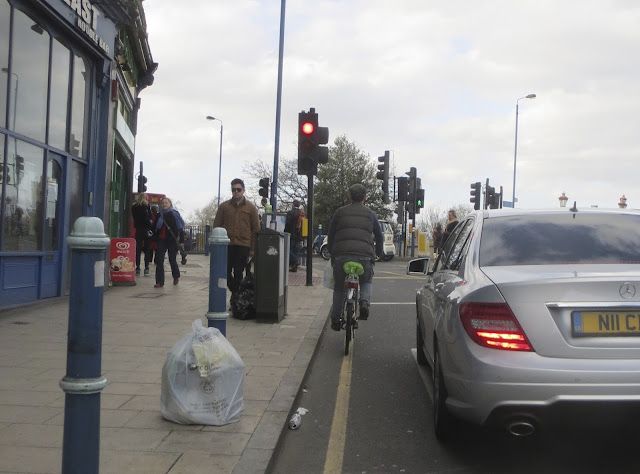 I knew something was up when it had been nearly five minutes since my last Barclay bike sighting. Then when I crossed the Thames River (you'll notice by looking at the map again my ride to Angel shouldn't have taken me anywhere near it) I knew I was in trouble.

Other than the risk of being miles off course and being late for a long-awaited dinner, it wasn't too bad. Sure, I was off the map, didn't have a GPS, didn't have a phone, was in an unfamiliar area and did't even know which way I was pointed, I was in an area where I spoke the language, and thankfully there were plenty of cyclists to patiently help me find my way back to Earl's Court.

Incidentally, New Yorkers: brace for people on Citibikes stopping you, pointing to the water and asking 'What river is this?" It may be rare but I can see it happening. Still, be glad Manhattan is relatively easy to get around in.

But back to London: I made my way across the river and managed to find Kensington Gardens. Now I originally planned to see if I could do this ride in 30 minute bursts between docking stations to keep the ride free. 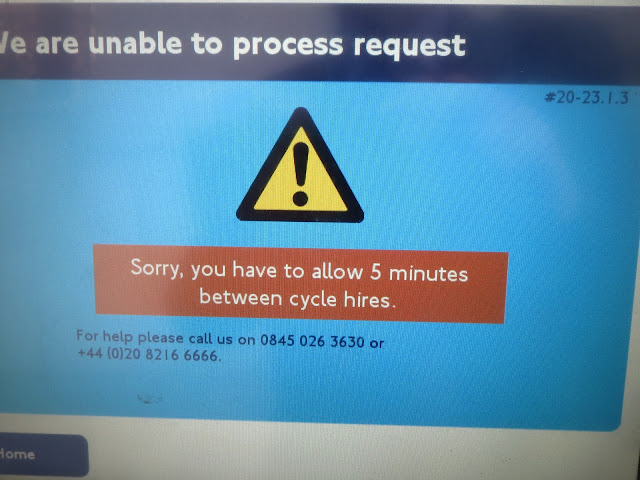 Yes, the Barclay's bike people thought quasi-cunning folks like myself would try such a thing. But it's alright: the rates are very low and I want to keep the system working so it will continue and more cities create bike shares (Hello again, Stamford. How's that traffic congestion working out for you?)

It was a long five minutes (I was genuinely worried at this point I'd be late for dinner and, with no cell phone, had no way to tell my friend I'd be late). But it gave me a chance to catch my breath and I pulled out another bike. I made it to the top of the park and pedaled ferociously along Bayswater Road, which turned into Oxford Street which turned into Park Place and then into Baltic Avenue - or something like that. Double-decker buses and cabs were all around me - but I was faster than most of them.

I can't recall all of the street names, but I do recall saying things along the lines of 'why is this now a one way street?' and, after looking at the map and again at a street sign, asking 'how did I get all the way up here?'

Once again, New York City: you've got a lot going for you when Citibike deploys completely: Numbered streets that are often straight. Whomever planned London's streets may have had a pint too many.

But back to London: With only a slight sense of direction, I pressed on. The horrid automobile traffic told me it would have been futile to give up and take a cab. And a cyclist I met at a red light near King's Cross station (the very station known by millions of Harry Potter fans as the location of Platform 9 and 3/4) assured me the Angel station was just a little ways up the hill.

I pushed the cranks - wishing I had thought to at least remove my tie before the start of my journey since London was uncharacteristically warm and non-rainy for an April afternoon - and eventually found a docking station near Angel just a few minutes shy of seven o'clock. I gave an appreciative parting glance at the station as I sprinted toward Upper Street. 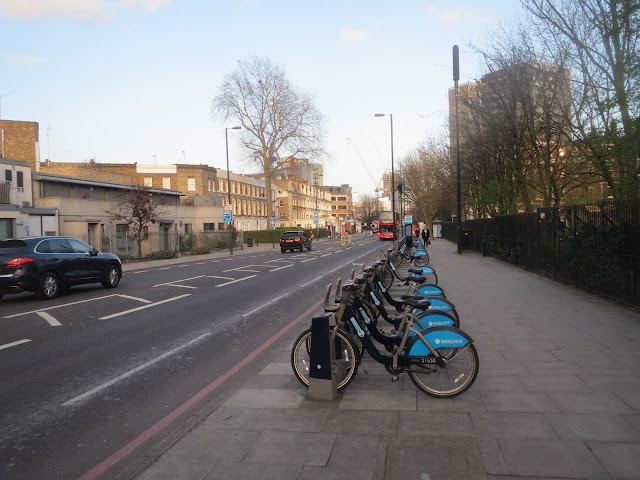 It was further away than I realized - and I did, in fact, pass the docking station I had intended to use closer to the Angel station. And even though I was almost ten minutes later to dinner, I still made it before my friend's partner arrived a few moments later. I drank three glasses of water before the waitress at Fig & Olive offered to leave a pitcher. Flying thousands of miles and seeing someone you originally met in Keene, New Hampshire ten years earlier was absolutely priceless and made this a ride I wouldn't soon forget.

The experience also made me realize once again that the Barclay bikes are the best way to get anywhere in London at anytime. And I have to tell you that sooner or later, the Citibike system in New York City, if properly managed, will eventually reach the point where no one will be able to imagine the city without it. And whether you ride or drive, that's a good thing. 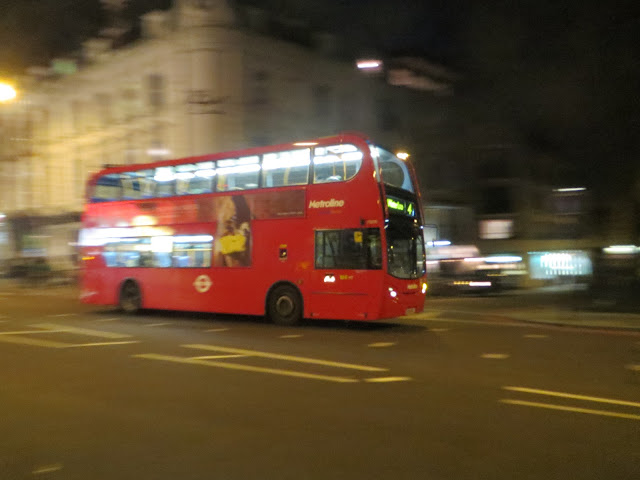