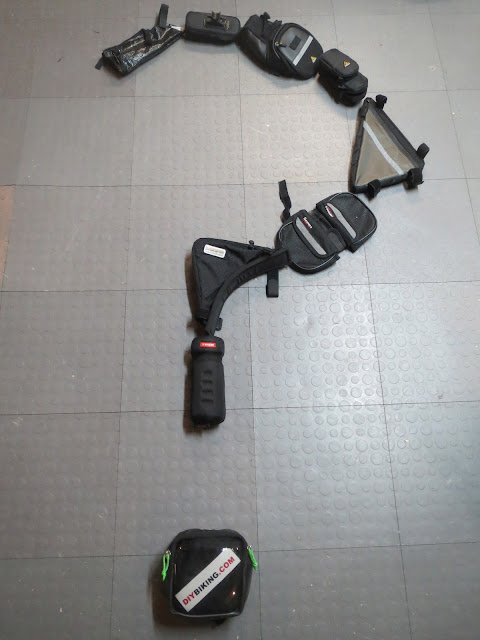 I am riding in Bike New York's TD Five Boro Bike Tour once again this year. But this year is different because it follows a few short weeks after the Boston Marathon bombing (if you want to donate to help the victims, be careful to avoid scam web sites and stick with ones like One Fund Boston which was created with the help of governor of Massachusetts Deval Patrick and Tom Menino, the mayor of Boston who has turned his city into a surprisingly nice place to ride).

As I was expecting, the bombing would affect how large, outdoor events were going to plan security, and since I had been gearing up for the Five Boro Bike Tour 2013, I wasn't surprised when a message was sent out last week, which contained the following:

As part of this security plan, you are not permitted to bring the following:

You are permitted to bring the following: 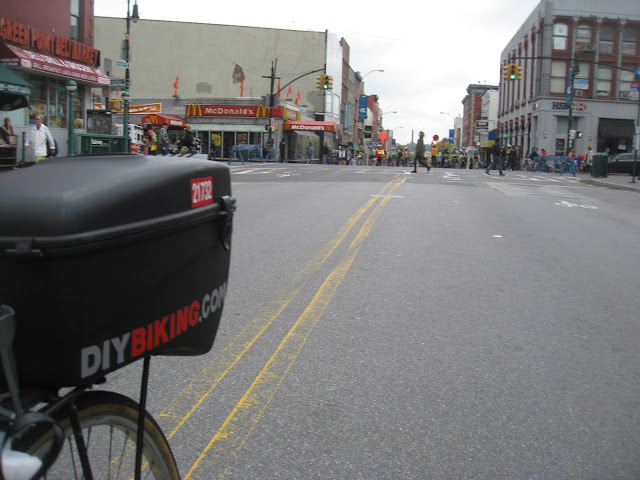 That's a picture of the trunk box I had during last year's tour (and I took that picture at the Five Boro Bike Tour 2012 by holding the camera over my shoulder).

Now this year I was really looking forward to debuting my Even Better Bike Box to the Five Boro Bike Tour community. I even made a special modification to it by substituting a Serfas bike light for the metal knob on the lid. 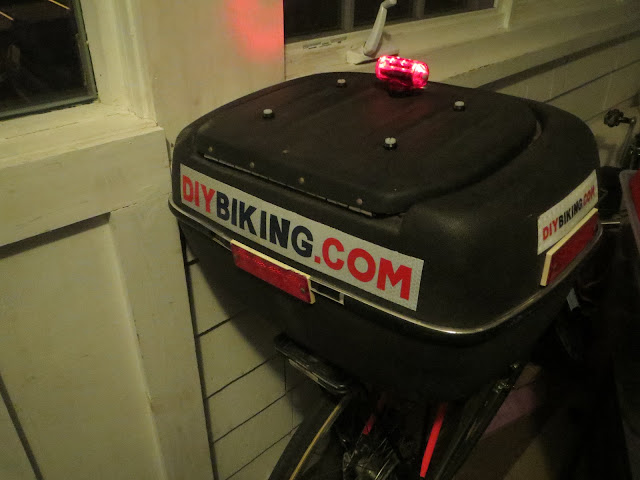 This new security rule - which I hope isn't around for the Five Boro Bike Tour 2014 - is going to cramp my style. But I do not want to give the police officers and Bike New York volunteers any reason to be worried (or stop my bike to search it) and, frankly, my style could probably use a little cramping.

Now the issue I have now is I have to remove my Even Better Box and at the moment I have nothing to substitute it. Even the Better Bike Box made from a plastic Plano toolbox is too large. Fanny packs are allowed but if you know what a recumbent looks like the fanny pack is not the right kind of luggage. Underseat bags are permitted (can't mount one of those, either)

When I asked the Five Boro Bike Tour for a clarification on what I could bring (if baskets were allowed, for example) I was sent to the Five Boro Bike Tour 2013 security page. I recommend that you read it - and marvel at the amazing patience of Five Boro Bike Tour's Elizabeth Kiker - but the upshot is you can't have trunk bags, or any other kind of bags, if they are over 420 cubic inches (length times width times depth to figure this out).  You also can't break that rule with bags that are transparent, so you can forget about making a rucksack from a recalled pair of Lululemon yoga pants.

No baskets are allowed, either, but you can have a rear rack with a little net or small bungee cords to hold your jacket (it will be a beautiful day but it is always cold at the start line).

Plus - and this is the part that piqued my interest - you can apparently have multiple bags if they meet the size requirements.

I am heading to Bike Expo New York this weekend to pick up my tour pack, but I'm also going to be on the hunt for possible solutions. For one, I'm hoping that Vaya Bags, which makes bike bags of all sizes from recycled materials in New York City, will be there. After all, one of the Five Things I Can't Live Without on the Five Boro Bike Tour is the tea saucer sized oatmeal raisin cookie from Zaro's. I have to know where to store that cookie or all may be lost. Stay tuned, follow Bike New York's new security rules, and we'll have a great tour this year. Thanks for reading and thanks for riding.
Posted by Mike at 5:28 AM