On the (Six Foot) Fence About The Merritt Parkway Trail

So on Monday night  I took my little folding bike to the Stamford train station, bought a ticket to Westport and then rode from their Metro North station to the Westport Town Hall. 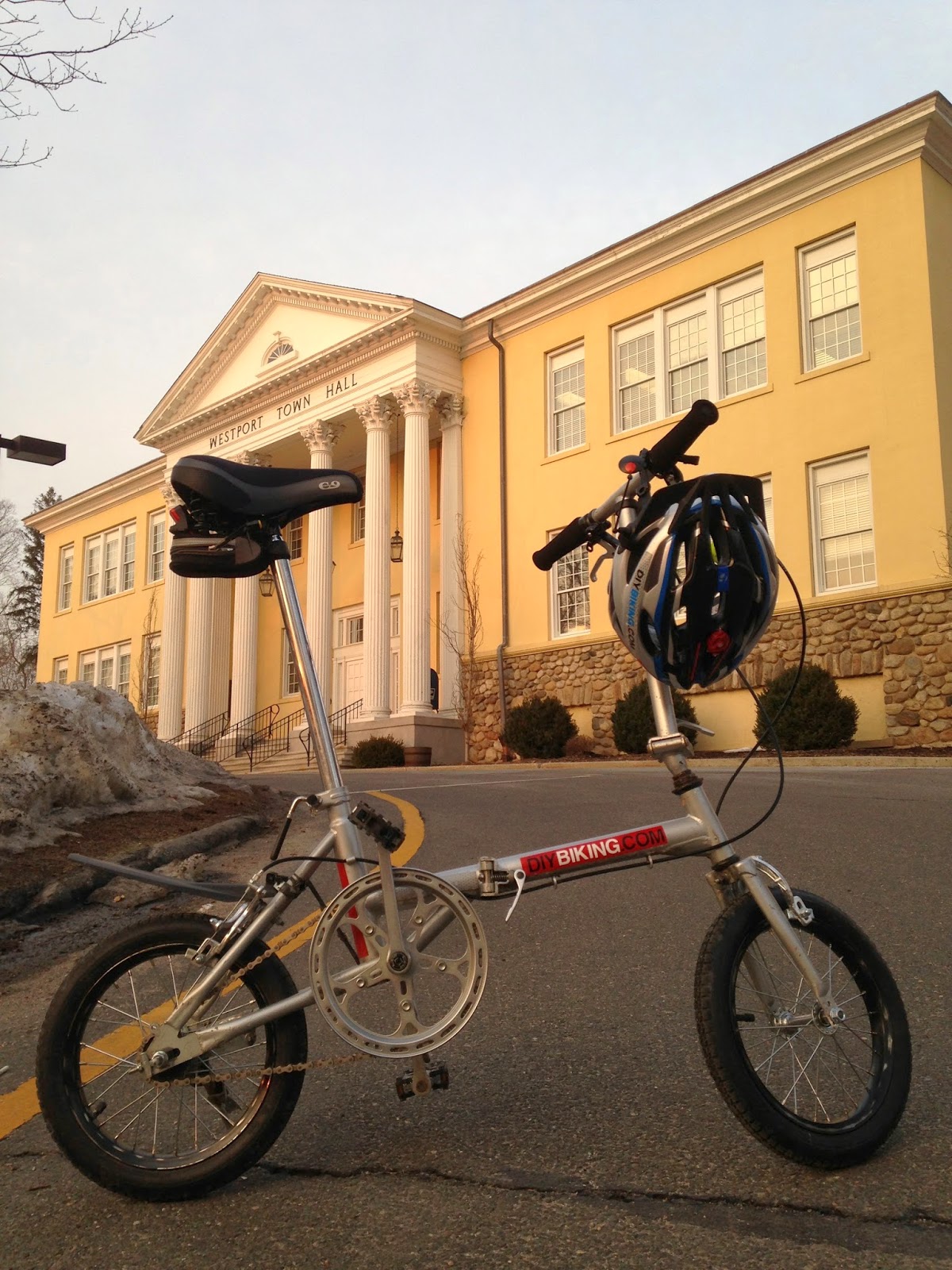 Representatives from the Connecticut Department of Transportation were there waiting to make a public presentation showing the results of the $1 million-plus feasibility study on a proposed Merritt Parkway trail. You can see more details of the study here but the upshot is a trail would be built along the south side of the Merritt around 70 feet or so from the parkway itself. The trail would span the entire 37.5 mile length and the estimated cost was pegged at $200 to $250 million - and about 20% of that ($50 million on the high end) would come from Connecticut. A six-foot fence would separate the trail from the properties that share the right-of-way section with the parkway. 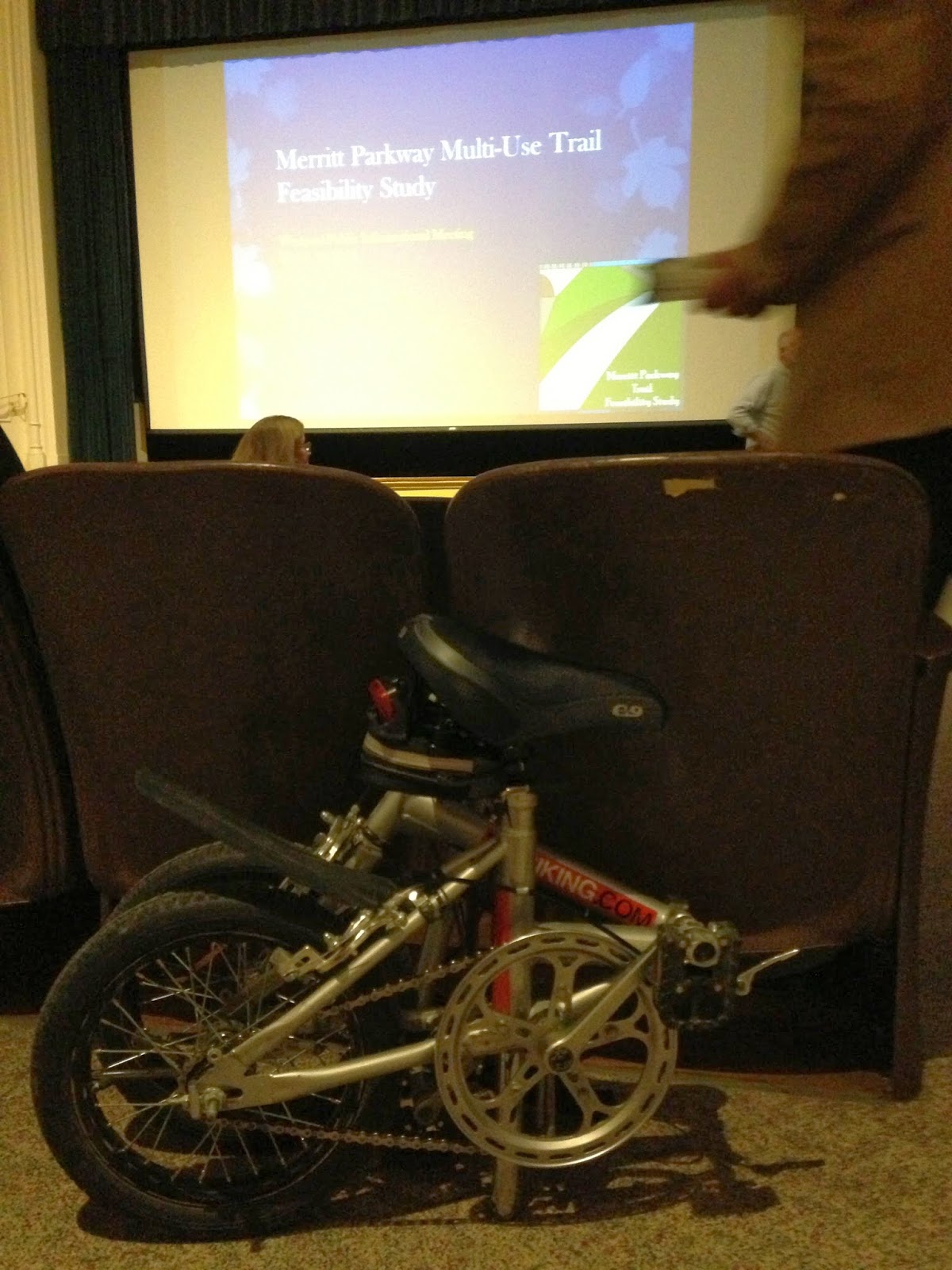 I'm not against this project, but I'm not feeling the love for it, either. I'll follow the Buzzfeed-inspired trend of listing my reasons:

1) I'm more in favor of projects that spend as little money as possible that help as many people as possible before moving to the big stuff. For instance, on-street bike lanes and 'lane dieting' initiatives are cheaper per mile than the Merritt Parkway Trail would be. As it stands, the trail's estimated cost is about $6.6 million a mile (roughly $1.3 million coming from Connecticut).  According to the presentation I attended: this money would be for a trail that won't have lights, that won't be plowed in the winter, that will have a fence on both sides, and (in Westport, anyway) have a lot of road crossings (also, as good as the CT DOT presentation was, I didn't care for nor believe the estimate that it would take a cyclist, moving at 15 miles an hour, a little over five minutes to cross the town, since it did not appear to take into account the time it would take a cyclist to dismount and cross a road safely before mounting up and starting again).

2) If the Connecticut Department of Transportation were aggressively implementing a Complete Streets policy - as recommended by the annual report from the Connecticut Bicycle & Pedestrian Advisory Board - and were putting in bike lanes by the mile on as many roads as possible, I'd probably be a huge cheerleader of the Merritt Parkway Trail since people could get to the trailheads safely by bike. This makes the 'a lot of road crossings' point I made a moment ago important, because I don't see a great reason, in the words of some Merritt Parkway Trail supporters, to "link communities together" when the communities themselves aren't very hospitable to cyclists to begin with.

3) A lot of the dialogue about the usage of this trail seems to imply recreational use on weekends, with a point being made that the Park and Ride parking lots peppered along the Merritt Parkway would be useful places for people to leave their cars when they visit and want to use the trail. That's an argument that may have made a lot more sense ten-plus years ago, when the trail was first proposed, but now we're living in a state growing more notorious by the day for its automotive congestion. We don't just want to encourage weekend use, but day-to-day boring stuff like going to the grocery store or to the office.  Solutions like Complete Streets and passing a Vulnerable User law need to be done so people are incentivized not to use their cars to begin with. 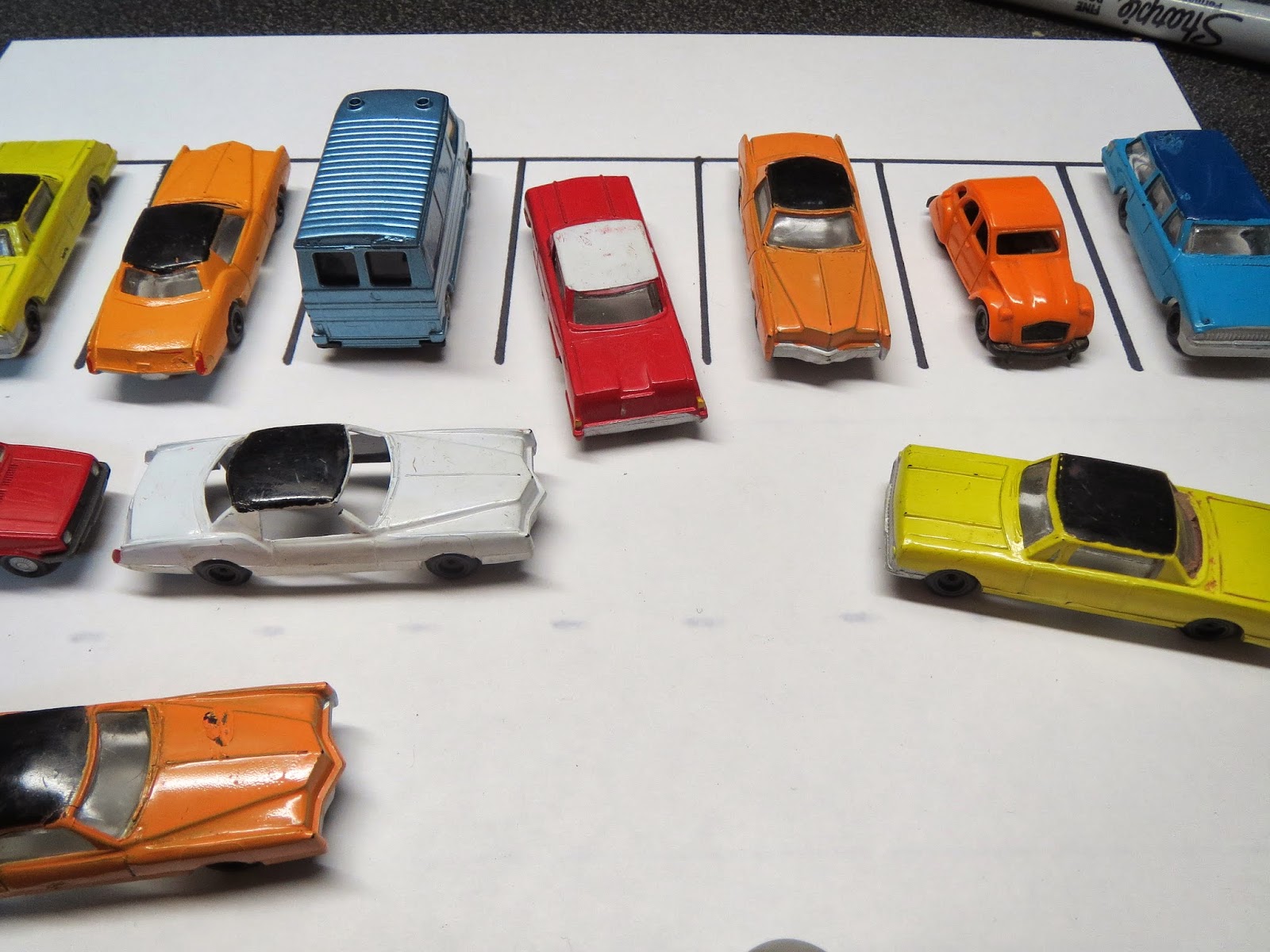 All of these issues are real: as I said, the night of the meeting I rode my bike to the Stamford Train station (thereby leaving a parking space for someone who really needed it), folded it to bring on Metro North, and in the two-plus miles I pedaled from the Westport station to the town hall on Myrtle Avenue, I didn't see a solitary bike lane, Share the Road sign or even a sharrow.

If I had, I might have entered the meeting with an East Coast Greenway hat and made a full-throated endorsement of the trail.

So if momentum is really moving toward building a Merritt Parkway Trail, that momentum has to be extended to less sexy things that, at the end of the day, should take priority.  When the state starts aggressively implementing Complete Streets, when legislators pass a Vulnerable User Law, when I don't have to lock my bike to an ashtray at the bank, when we commit to a future that makes it easier for people to choose the bike to get around on the very same streets cars drive on now, then you can hand me an ornamental shovel and a oversize pair of scissors for the Merritt Parkway Trail ribbon cutting. Until that progress is made, I'll be rooted in my indifference. When you're a passionate cyclist, it's not a fun place to be.