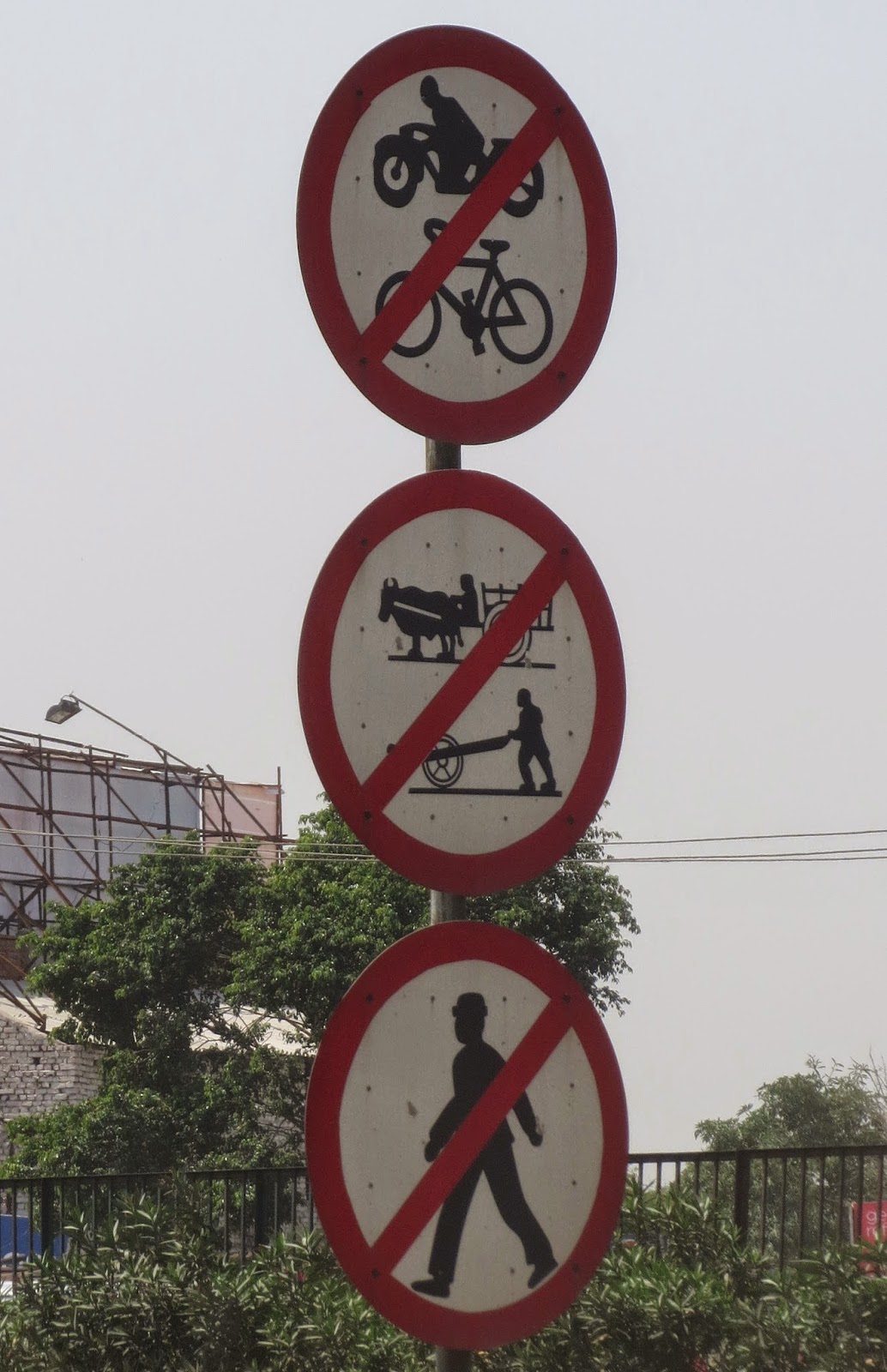 I apologize for not adding this post sooner: I was traveling yet again last week and had to unexpectedly stay an extra night at my location where I was forced to wash underpants in a sink at a Holiday Inn and leave from a different time, day and place that I planned. More details in another post.

But now, for those of you who tuned in to the most recent post: I had landed in Delhi and was prepared to stay five days in Gurgaon at the Leela Kempinski. On the afternoon of day one I did something I had wanted to do for a long time and I bought one of the most popular bikes in India: an Atlas with one speed, a heavy-duty rear rack, a loud bell, an integrated lock and 28 and a half inch tires. I paid 3,750 rupees for it (about $62.50 U.S.) and was prepared to get my money's worth. 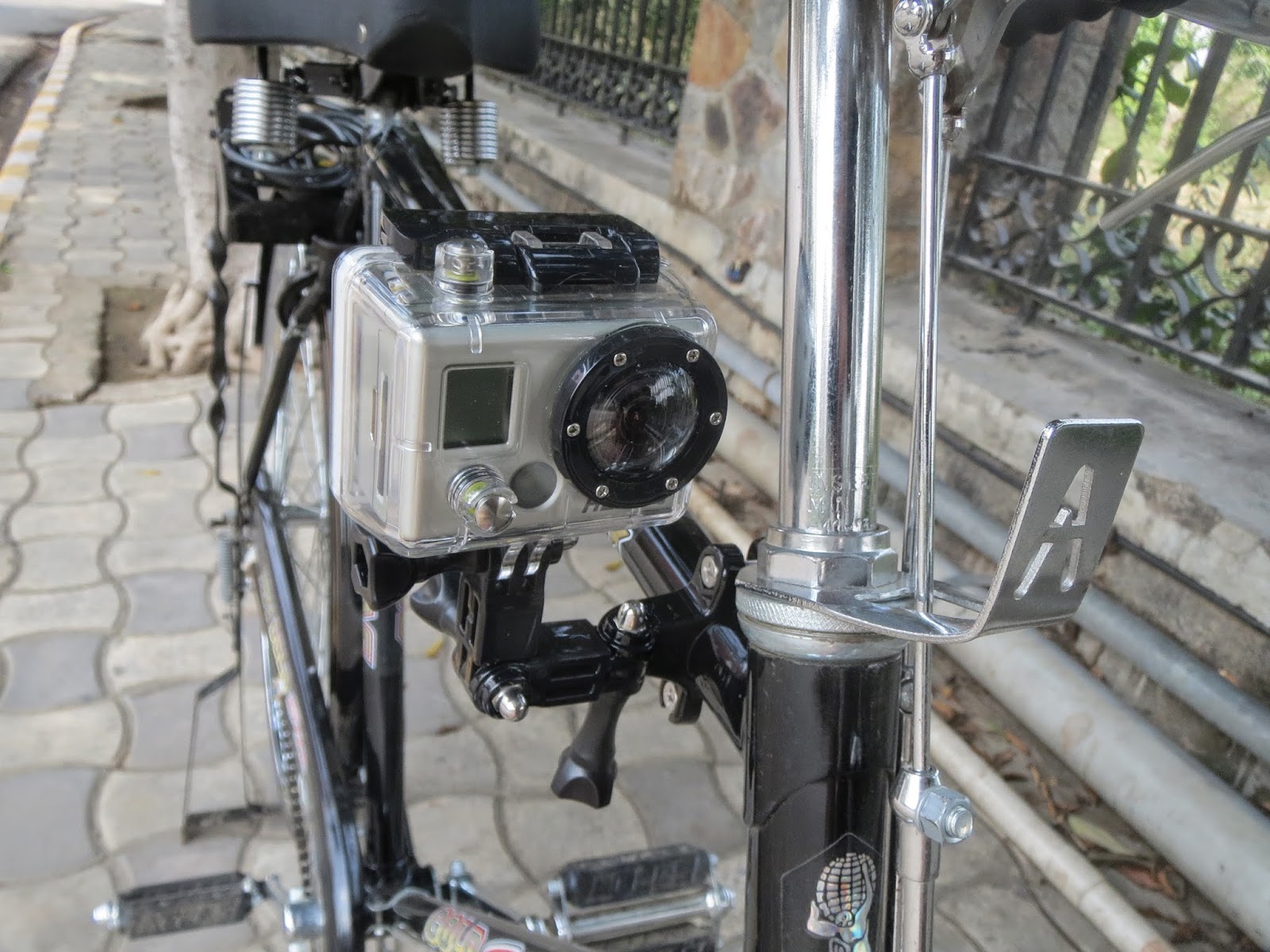 Of course, I had to outfit myself and the bike with key pieces of equipment before I started: for my first ride I brought along my GoPro HD Hero 2 and the entire time I traveled my Garmin Edge was fastened to the handlebars.

There are countless bikes like this one in India. Mine was the only one I saw that had state-of-the-art satellite navigation.

I was also the only bicycle rider I saw the entire five days I was there who wore a helmet. I was stared at quite a lot of the time. A pedestrian at a Delhi intersection once pulled out his cell phone to take a picture of me while laughing…possibly to post on his Facebook page.

Day one of this adventure was just getting a feel for how things worked. I was too busy the day before just getting used to the handling and quirks of my new bike to pay much attention to how traffic flowed. But I did observe, while riding out of Gurgaon, that traveling on the wrong side of the road isn't uncommon. 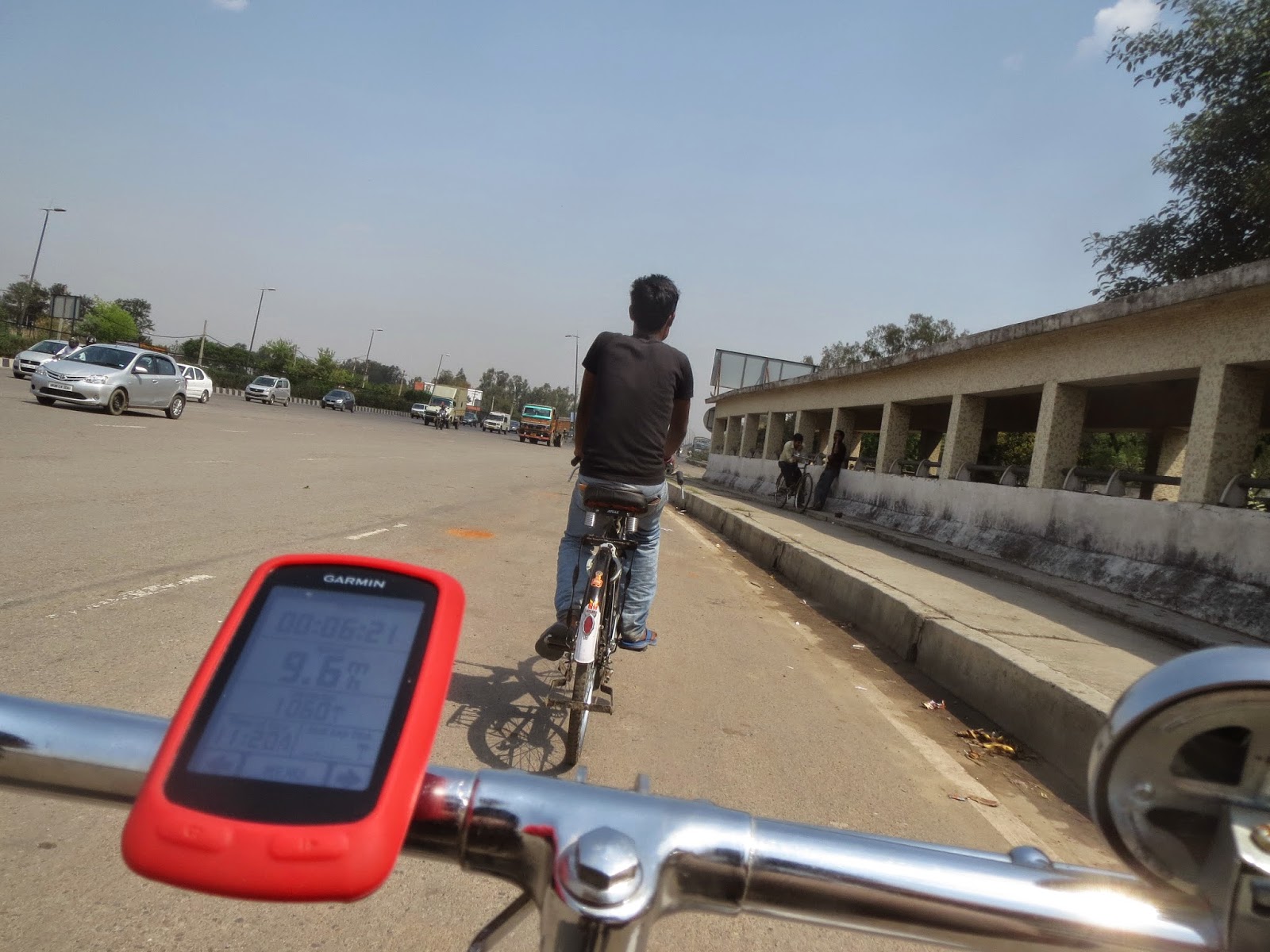 At the first underpass, I moved to the correct side of the road (like the UK they drive on the left) and pedaled along National Highway 8. 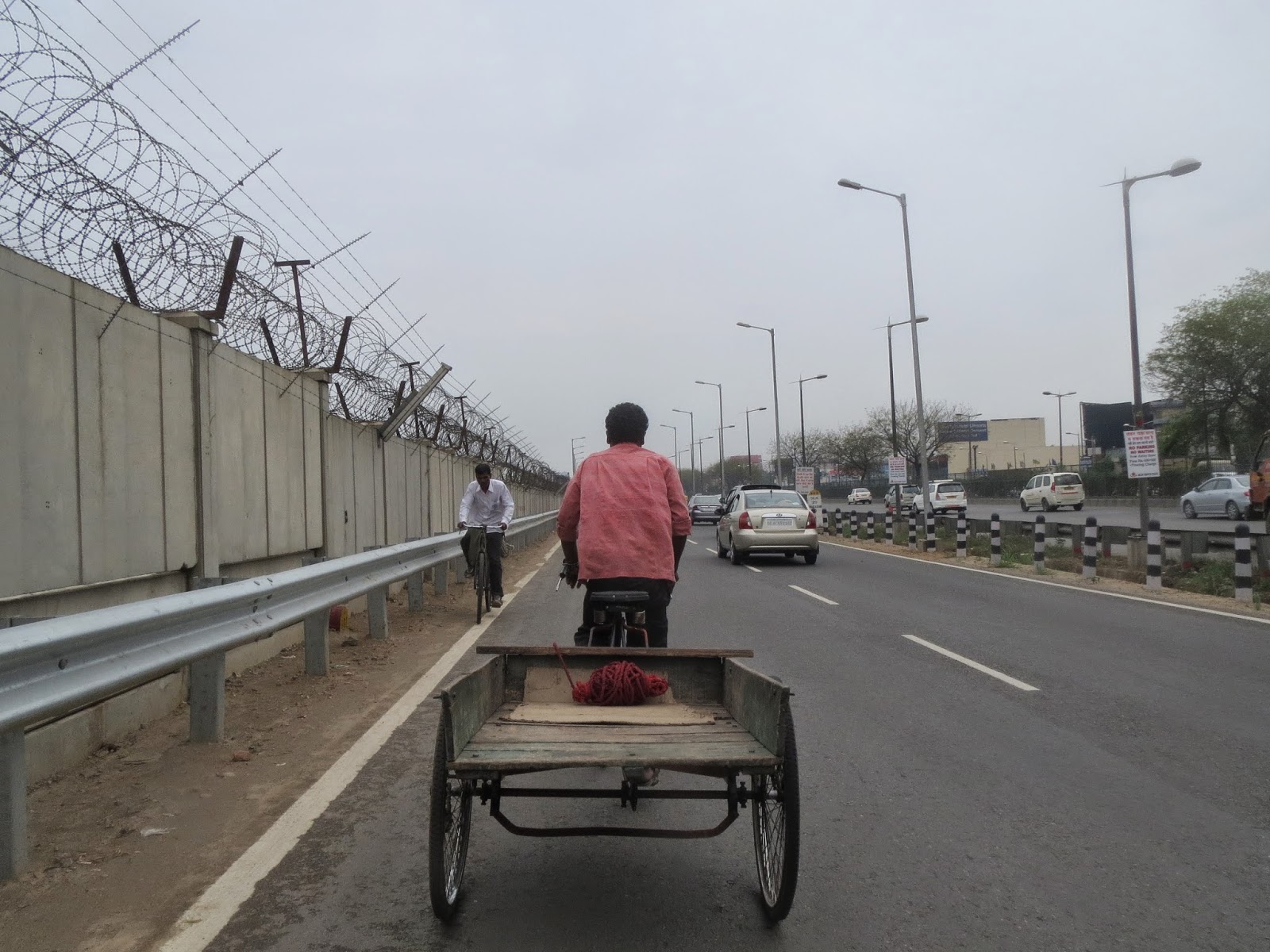 If the Merritt Parkway was running alongside of I-95, it would look a lot like this, I thought.

I didn't go far the first day. Still addled from the jet lag from the first leg of the journey (more on that in another post) and simply treating this day like a recon mission, I rode up NH8 until I came to a pedestrian overpass not far from the Delhi airport - which thoughtfully contains a ramp to make it easy to push bikes up the steps. 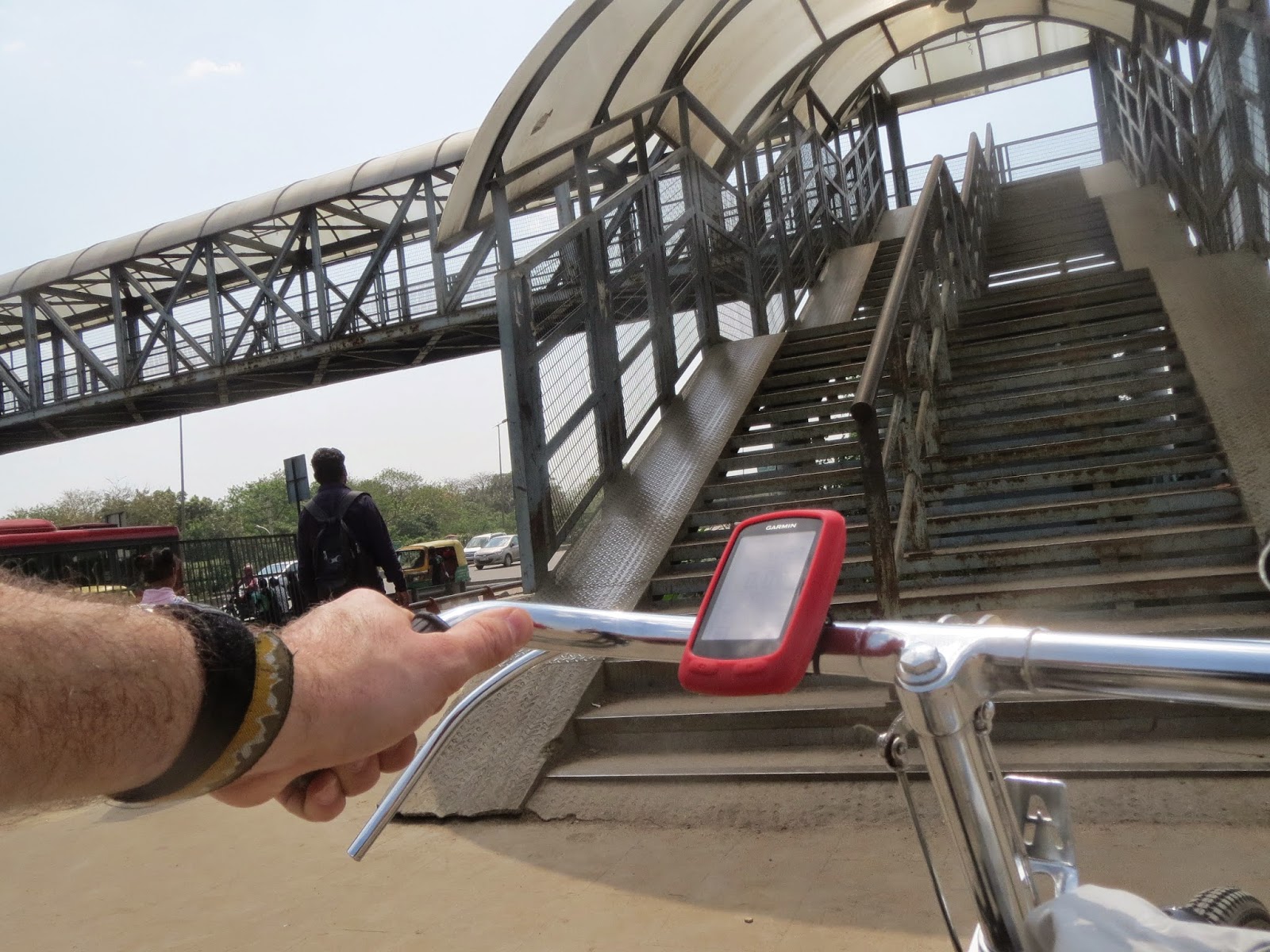 When I crossed over to get the other side I paused in the middle to observe the traffic. I was struck not only by the number of vehicles, but by their variety. They have vehicles in India they don't have in the U.S. I'm not just talking about the brands, but I'm talking about stuff that has a distinct 'Mad Max' flavor. 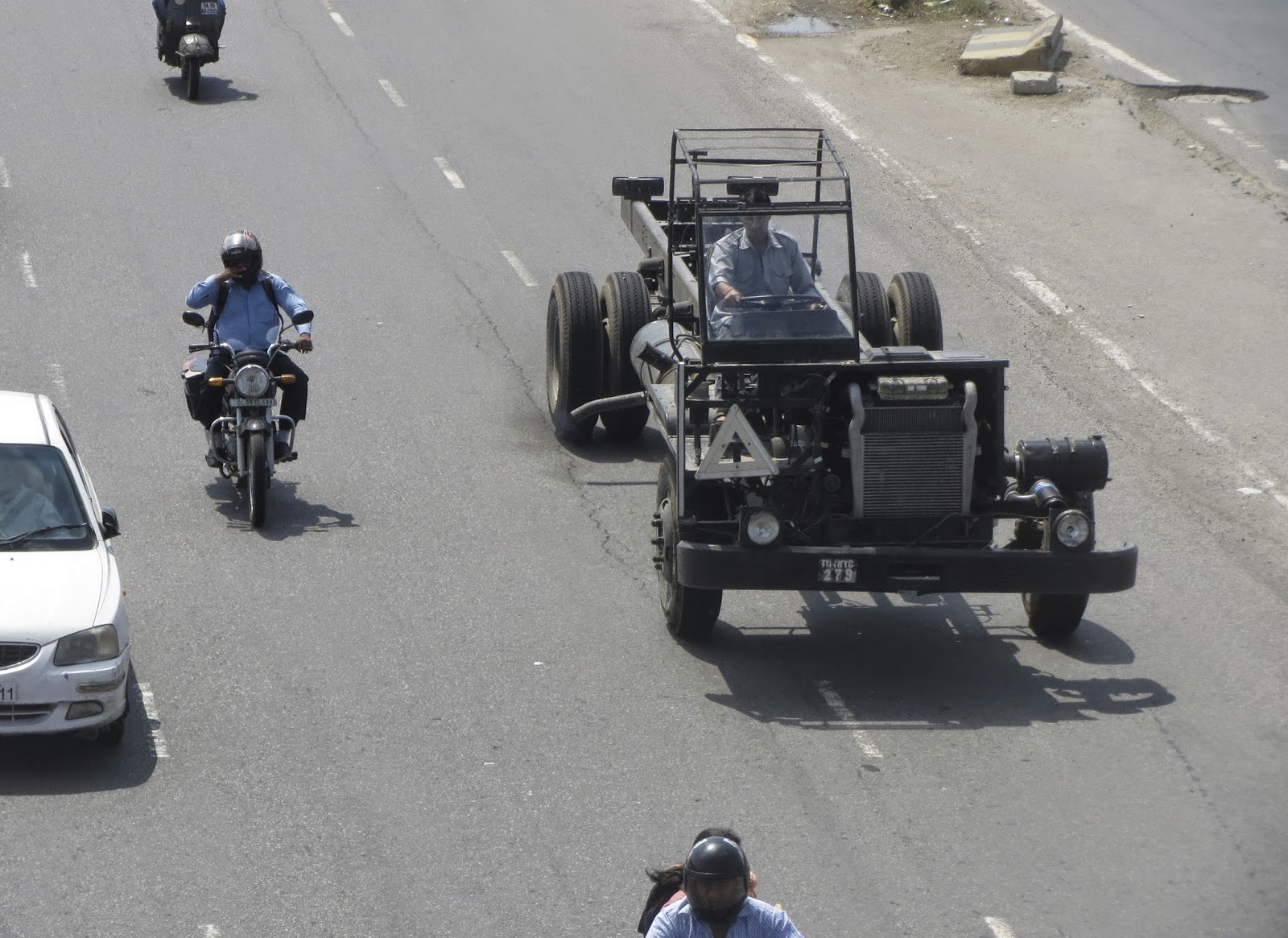 I cannot settle on a caption for this photo. The best I could come up with was: "Lord Humungus called. He wants his truck back."

You just don't see that in the U.S. You just don't. And I saw vehicles stranger and more dangerous looking than this. I'd be willing to bet that if Steve Martin and John Candy drove through in the burned-out Chryler LeBaron convertible from Planes, Trains and Automobiles, nobody would pay that much attention.

It was on the way back toward Gurgaon I came upon another common site in India. 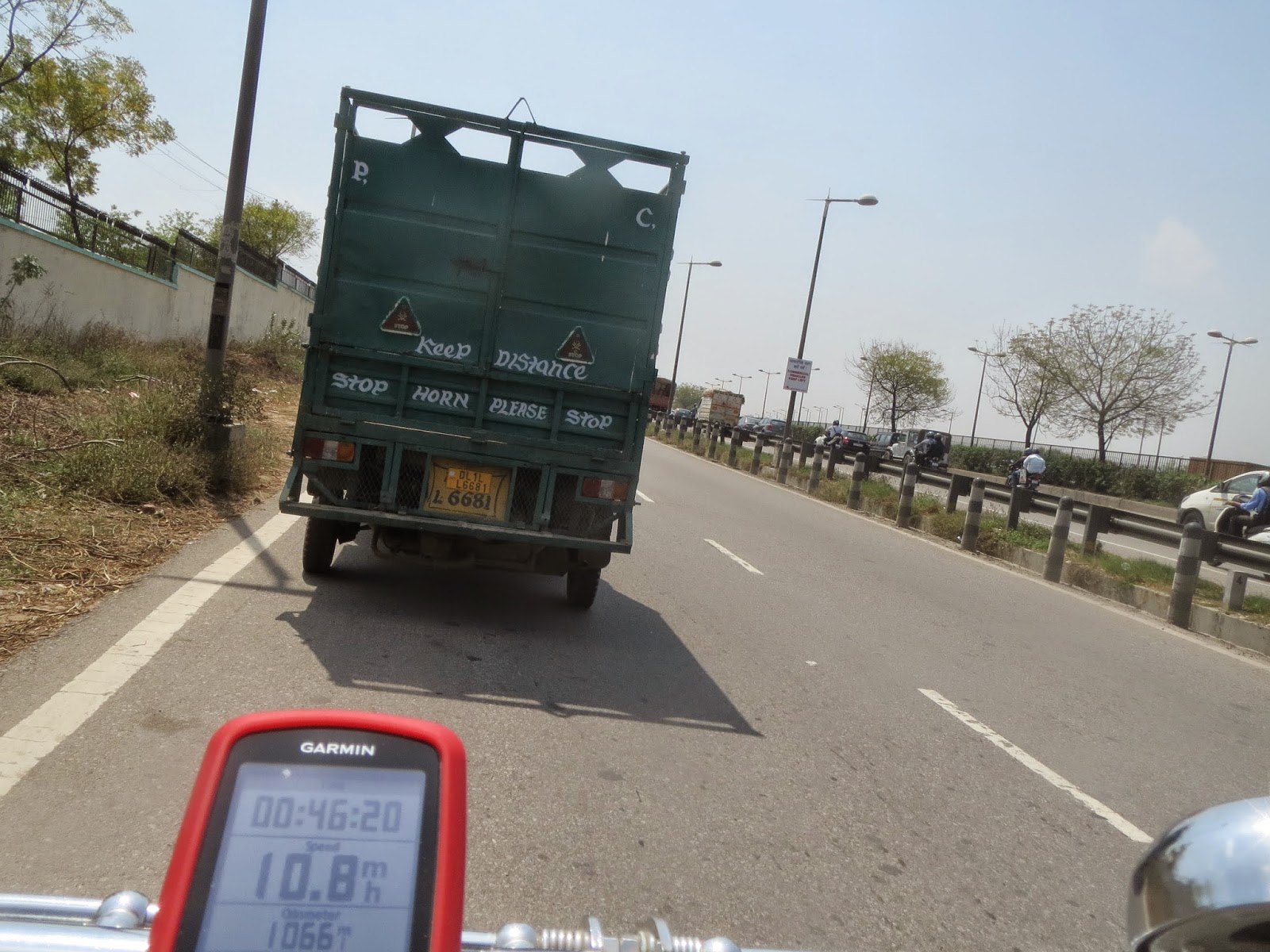 This is a little three-wheeled truck, and that is very common. But I'm also talking about the hand-painted 'horn please' sign on the back. Horns are heard a lot. People honk when they pass you. They honk when they aren't going anywhere near you. They honk nine times before getting into the car that morning. In some places it is nothing short of an ear-ringing din.

However, it isn't like the honking that happens in the U.S. India is
the only country I've been to where everybody honks yet nobody seems angry. The attitude on the road seems to be: 'This is what the state of traffic is. Don't take it personally.'

The honking did remind me of an important safety recommendation for riding anywhere, which is ride predictably. Cars, trucks, tuk-tuks move fast, and even with a helmet-mounted rearview mirror (which I brought with me) they show up out of nowhere. It is no time to weave, rock, swerve, meander or otherwise move in a manner that can bring you in the path of another vehicle. 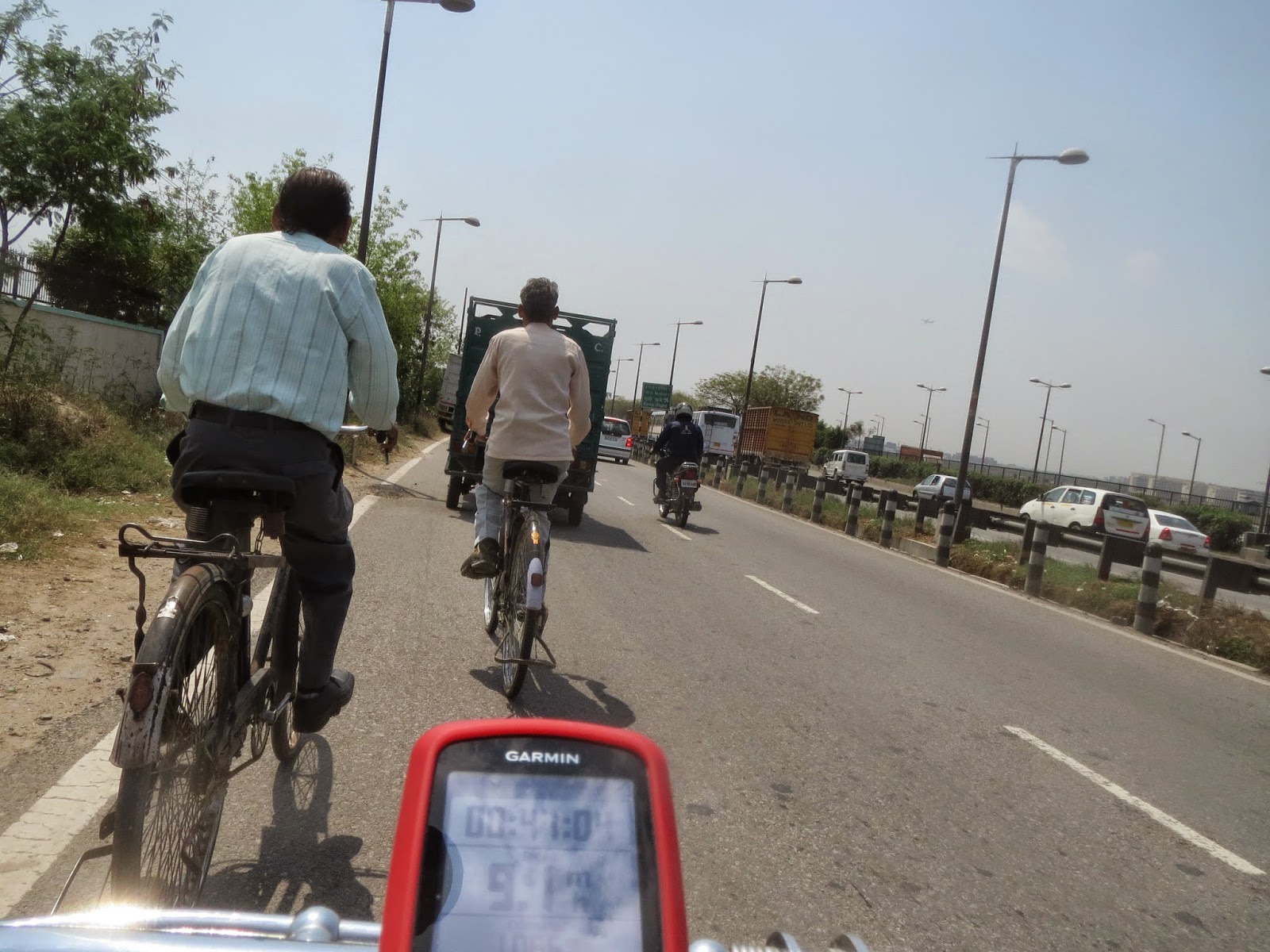 As intimidated as I was at first, I noticed nobody looked particularly scared. Not the other cyclists, not the pedestrians who'd cross insanely busy roads, no one. It just looked as though the everydayness of chaos was just background noise everyone was used to but the guy with the bicycle helmet and the Garmin on his handlebars.

Back at the Leela I parked the bike and once again had lunch at the Ambience Mall. The afternoon I spent planning my route for the next day (I wanted to ride all the way to India Gate), enjoying the yoga class and telling the attendees what I had done that day, and also did some thinking on what I should do with the bike at the end of the challenge. To be concluded later this week, for now, for those of you in Stamford, I will see you at Lorca at noon today for the first Bike Stamford ride of the season. Thanks for reading and thanks for riding. 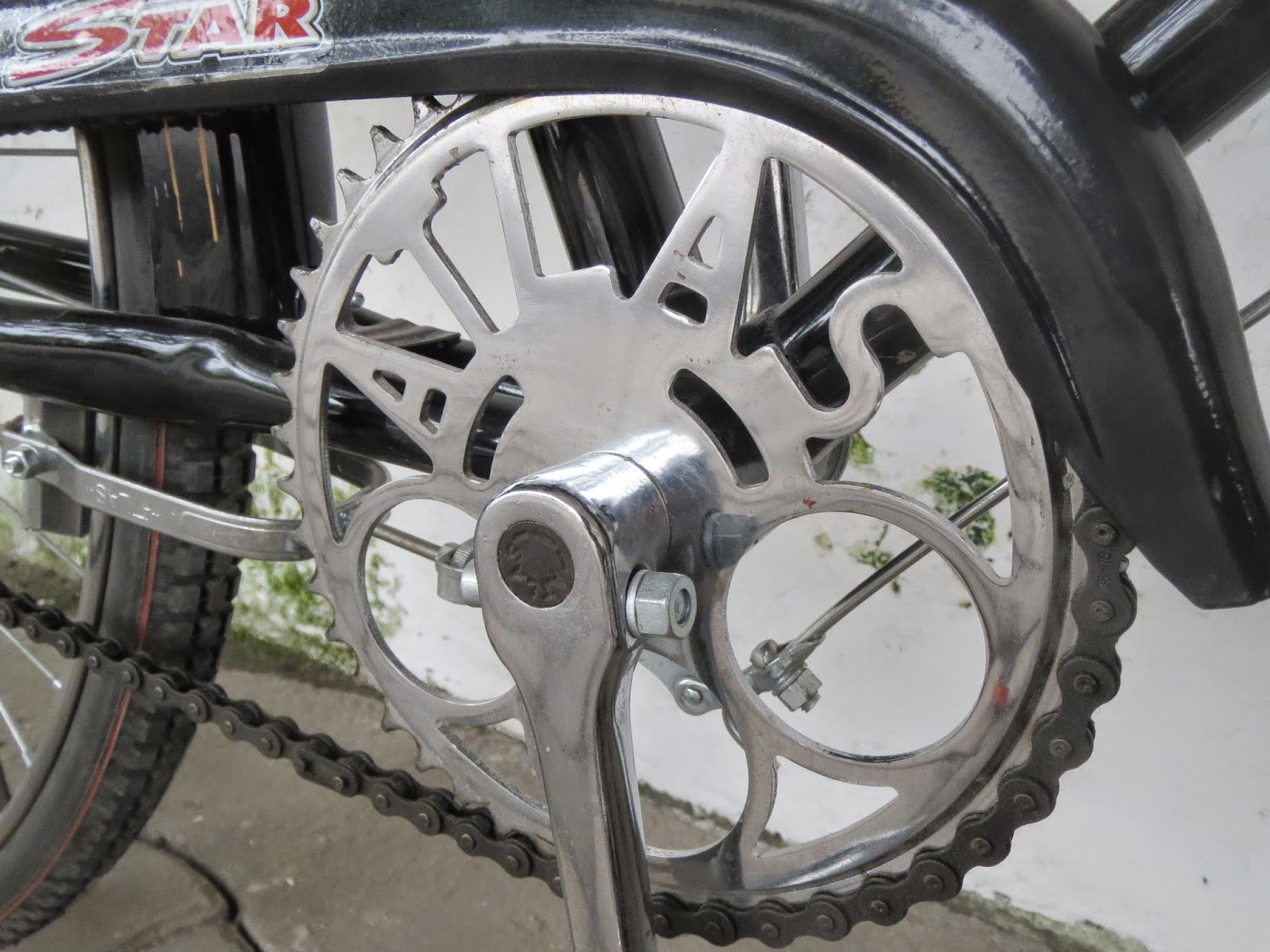