Welcome to DIYBIKING.COM's new miniseries: My Maker Year. Brought to you by Cherry Hill, New Jersey.

(turns to Camera B with Jon Stewart-like smile)

Cherry Hill. A middle finger to pedestrians in town form. 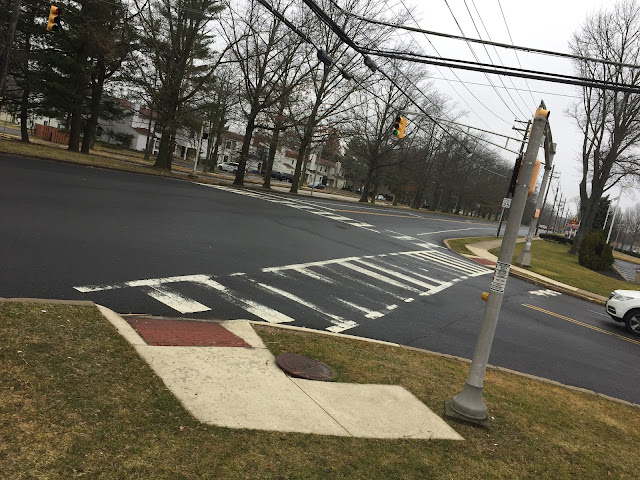 
(turns back to Camera A)

While purchasing Box Bike Collective was in its final stages in December I began to wonder how much of the construction aspect I could do on my own - and what actually went into each of the many build steps. One of the steps is powder coating.

For those of you who don't know: most bicycle frames (good ones) are powder coated, which is the practice of spraying colored powder onto metal. In this process, the metal is positively charged and the gun spraying the powder is negatively charged* so the powder sticks to the metal. You then 'cure' the powder by putting the frame into an oven at a certain temperature for a certain amount of time. When it comes out you let it cool and the frame is left with a shiny, durable finish that is stronger than ordinary paint. The two main catches of this is the equipment to do this can be costly and the steel has to be very clean for the powder to stick.

There are professionals around who can do this for you. If you want to do it yourself you can take a take a safety and basic use (SBU) sandblasting/powder coating class at TechShop San Jose and become a member so you can use the equipment by appointment. Lucky for me, I had already taken the SBU during a promotion TechShop was having early last year so I was able to start reserving the equipment as soon as my membership started.

If you have a bike frame you want to see a different color, your first step is to strip out everything on the frame. Unsure of my skills at powder coating, I decided to first use an expendable frame - much like Darth Vader put Han Solo in carbon freeze just to see if it would work. 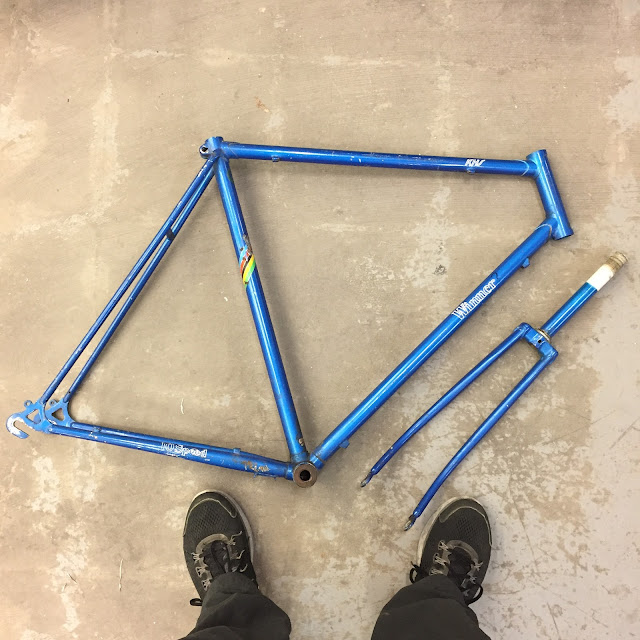 This was my frame. I had never heard of the 'Winner' brand before but it seemed like an appropriate name. If you look very closely you can see the question mark I added on the down tube.

The first step to giving your frame a new color is to sandblast it, so you bring it into a little room in TechShop with a cabinet large enough to accommodate a large bike frame. 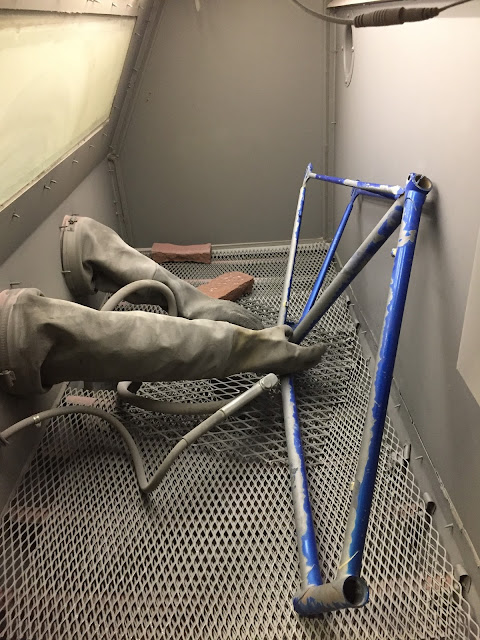 This step isn't hard, but it is time consuming. You also have to reach into the cabinet and wipe down as much of the glass shield as you can reach so you can actually see what you're doing.

Then with the fan on, you put hands in the Homer Simpson Nuclear Power Plant Gloves and push down with a foot pedal to make the sand (or 'media' as it is more often called) flow. Point away from the glass and aim the gun an inch or two from your work and press the pedal to make the paint disappear as if by magic.

Ideally, you move the gun in nice, even rows like you are mowing a tiny lawn but I found I had to reposition my frame so often I kept having to start at a new part of the frame. Also because of my height (coupled with the fact that I took so long and got so little sleep the night before I grew tired of standing) I ended up leaning awkwardly against the cabinet pressing my face on the glass. This left a huge black smudge I didn't notice until I looked into a bathroom mirror later and thought a small tarantula was mating with my nose. 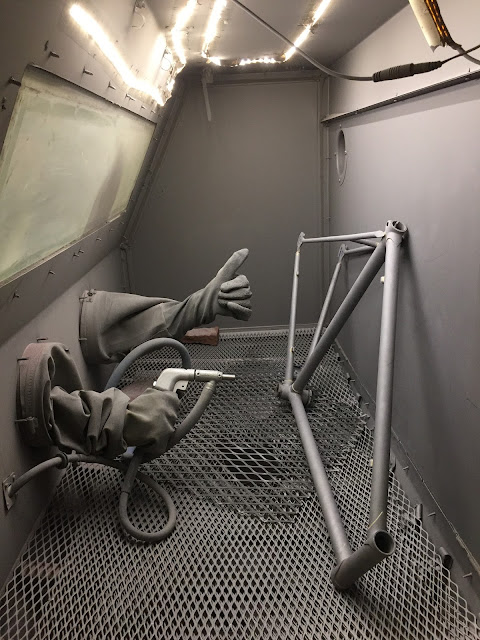 Sometimes the gun would jam or just not fire as much media as it should. When that happens I did what a TechShop employee told me to do and it worked: I'd put the gun against my finger, pull the trigger for half a second and take my finger away to clear the gun.

The other lesson I learned was that I should have used an angle grinder to take off the 'Winner' frame label. Also, because the powder coating oven can take a while to preheat I should have turned it on half an hour or more before I was done sandblasting. 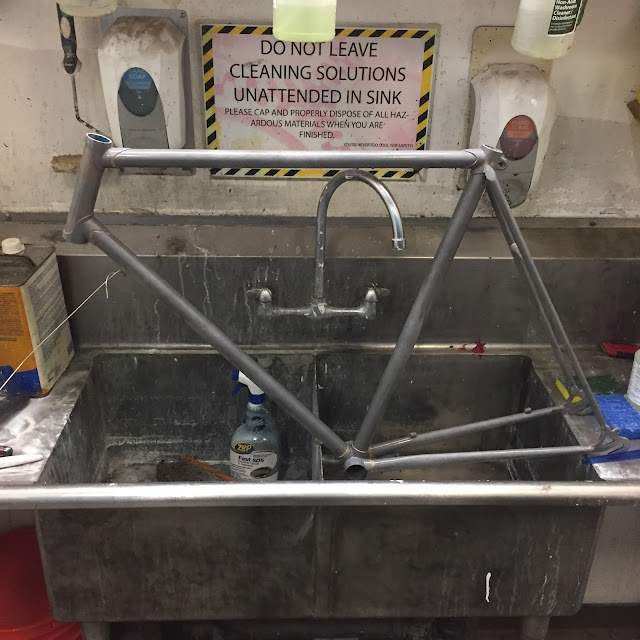 The next step is to clean the frame - and they have a sweet sink to do just that. With soap, water and Simple Green I got the frame clean** and dried it off with towels and an air hose.

Finally it is time to powder coat. The TechShop front desk sells different colors of powder and gives a discount to members. The colors come in small plastic tubs like the kind Talenti gelato comes in with instructions on bake time on top. I chose a bright yellow that had instructions as certain as the sell-by date on milk.

They also sell silicone corks and silicone tape. These are incredibly important since you have to put the corks and the tape in all openings in the frame you don't want the powder to go. 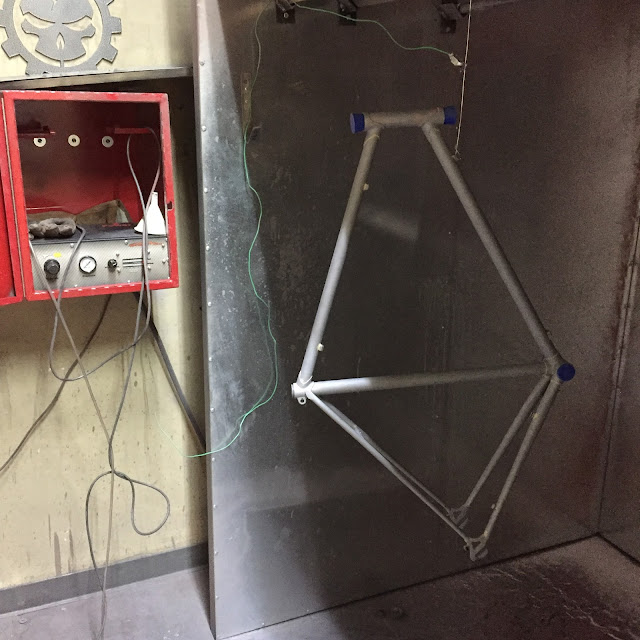 After you hang your frame in the powder coat booth (a piece of wire does just fine) be sure a thin gator clamp is attached to the wire or the powder won't stick. Then pour about 1/3 or your powder into the cup and screw it into place. Then you locate a plastic gun that looks like it was stolen from an early Star Trek set, point it at your work, and pull the trigger. 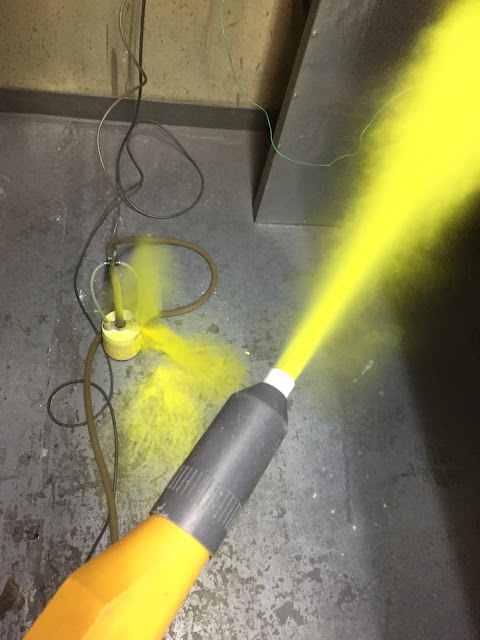 Actually: don't do that! I missed a couple steps here.

To keep these problems from happening to you, screw the cap on tightly (I sealed mine with some electrical tape I had in my messenger bag) and turn the little dial on the machine so the gun is spraying a gentle miss at or below 5 psi. 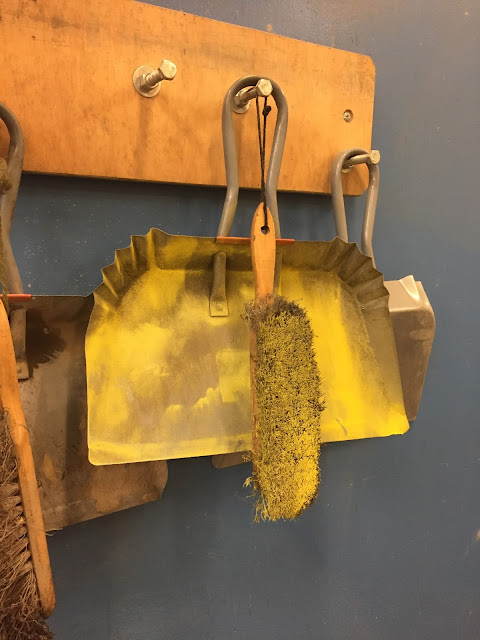 If either of these things prove unsuccessful locate the dustpan and broom just outside the painting area.

Once I got a less enthusiastic discharge from the powder gun, I gently ran the yellow mist over the frame. 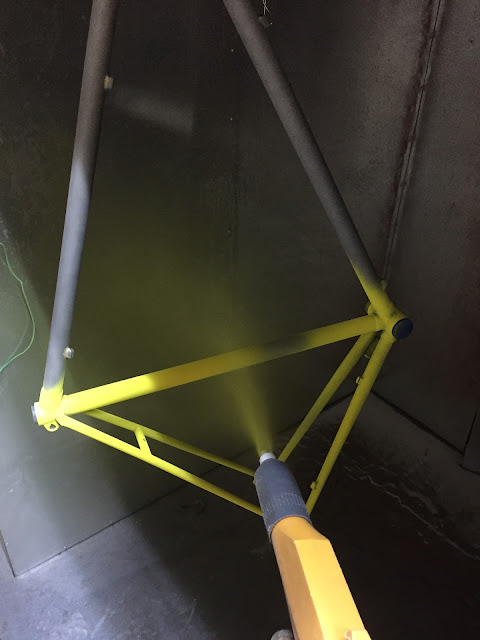 Once I had the frame thoroughly yellowized it was time to put it in the oven the size of a large refrigerator, which was by now preheated to 400 degrees.

This is a critical step, because you have to carry the frame without banging it into anything or the powder will just come off. Pretend it is a nest of peacefully sleeping baby wolverines and you'll do fine.

It's essential to open the oven door as little as necessary so you don't let heat escape. This is a fact unknown to a passing guy in safety glasses who, seeing me carefully holding my frame in one hand and the door handle with the other, let loose with a "letmehelpyouwiththat" and opened the door with a wide swing - causing the 400 degree to gallop into my face, past my ears, and on to freedom.

I quickly hung my work and closed the door. To my dismay, the temperature of the oven had dropped about 60 degrees due to my mystery helper's interference. And it was climbing back up with a painful slowness.

What did that mean for my cook time? I tried to do math in my head to figure out what the equivalent of 400 degrees was when the oven wasn't quite that hot. Nervously, I let the frame bake for nearly 15 minutes - hoping it would be enough.

I shut down the oven and removed the frame so I could hang it on the rack to cool. Sure enough, the powder had cured and the silicone plugs had done their job. 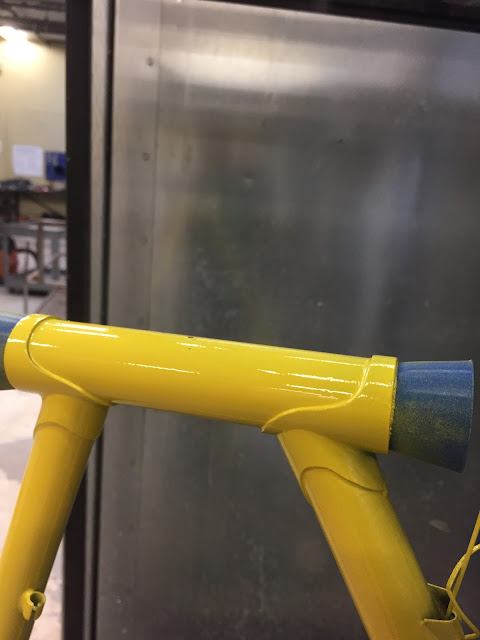 While it cooled, I cleaned up the powder coating room and put the equipment away for the next user. And, with returning the keys to the front desk I was done with powder coating.

Would you like to see the result in all of its glory? 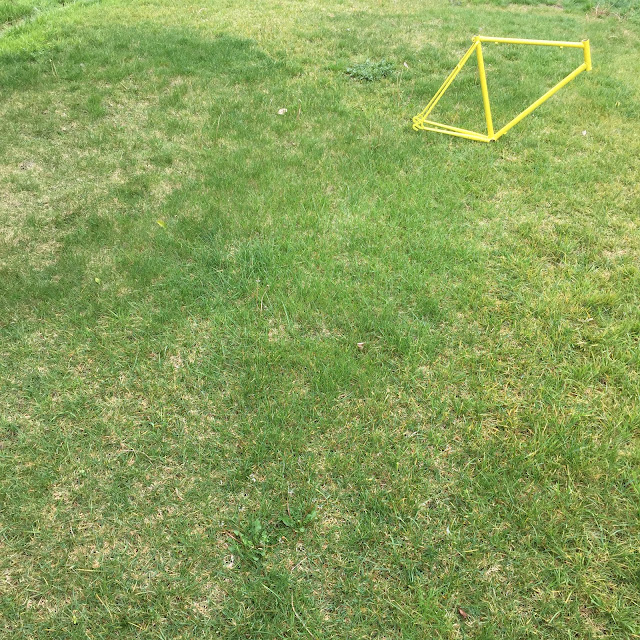 I'll be the first to admit it didn't come out perfectly. As it turned out, powder didn't stick much to the area between the chain stays near the bottom bracket and other 'armpit' areas where parts of the frame come together. I also had some unevenness on the top tube - namely the side that was facing away from me while I was spraying. So the lessons there were to make absolutely sure you get everything and that the frame is spotless when you put it in. Also it's advisable to preheat the oven for a slightly higher temperature that you want to account for heat escaping, unhelpful helpers, or both.

If you give powder coating a shot, keep these lessons in mind if you decide to head to TechShop San Jose (which is actually closed the next couple of weeks since they are moving a few blocks). In the meantime, thanks for reading and thanks for riding.


*It may be the other way around. I forget.

**Not enough to make the powder stick very well in a few spots.