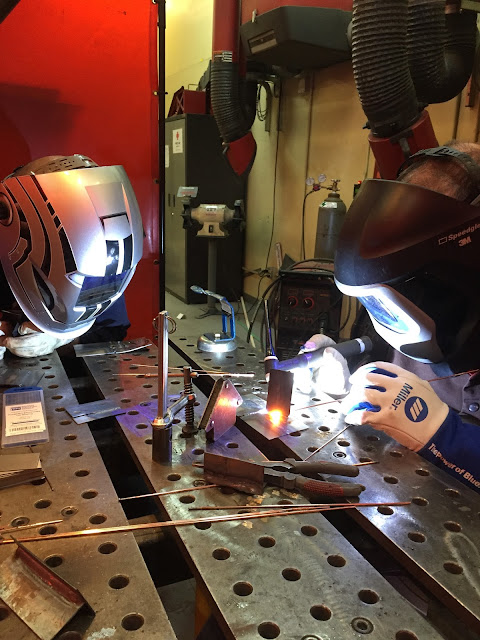 At a TIG welding class at TechShop San Jose

Welcome to another edition of #MyMakerYear by DIYBIKING.COM. Brought to you by Cherry Hill, New Jersey.

(Turns to Camera B with a Smile) 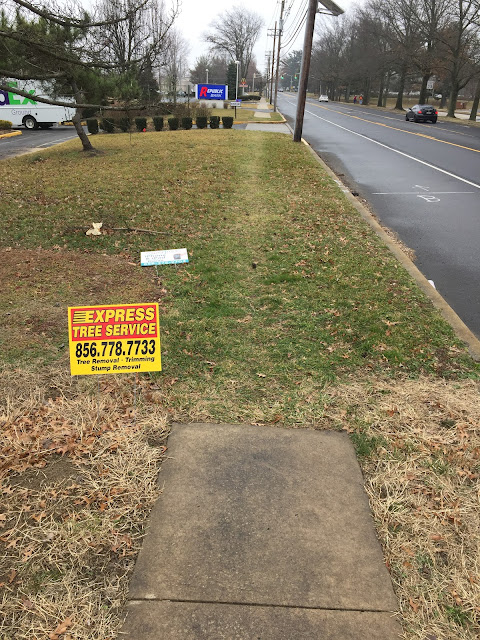 (Turns back to Camera A)

How is your bike joined together?

That depends on where it is made and who made it. In the UK, when I toured Brompton's headquarters, I saw the beauty of brazing (and you'll see it too if you buy a Brompton folding bike). All of my welding that you've seen me do for this site - including the folding cargo bike I made from old bike frames last year - is MIG welded (Janet Lafleur made this video last year on Bike to Work Day).

But when I bought a cargo bike business (which will be seen at the Silicon Valley Bike Festival May 7th) I discovered all of the bikes are TIG welded.

I didn't even know what the 'T' stood for. Here's a handy answer key if you forgot too:

Also, while we are on initials: KGB stands for Komitet Gosudarstvennoy Benopasnosti but it is easier to say "Committee for State Security" in English.

But back to welding.

Modern MIG welding works by attaching a metal clamp to your work and touching it with metal attached to your gun. The metal is fed from a spool of wire in your machine which allows you to weld for very long periods - all with using just one hand if you wish.

TIG welding, as I quickly found out, works differently. You still attach a metal clamp to your work but instead of a gun, you have a special thing that resembles a really fat fountain pen attached to an unwieldy umbilical cord. An electrode made of tungsten* sticks out of it. You put the electrode close to your work without touching it, activate the welder with your foot and use your other hand (which you of course don't need to hold your work in place or do something important) to feed the wire into the arc - and thus join two metals together. 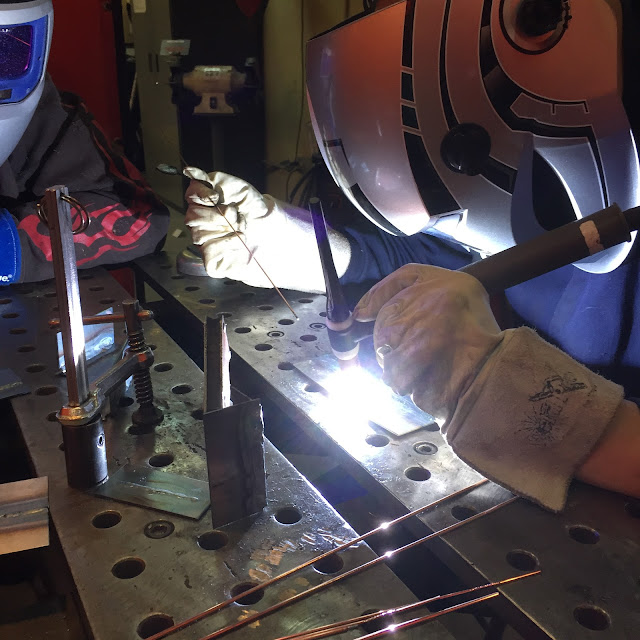 At a TIG welding class at TechShop San Jose

After I learned this I wondered why anyone would TIG weld when they could MIG.

But about ten seconds after I learned this, I found out why. I remember putting on my welding mask and watching Alex demonstrate how to build a cargo bike. Instead of smoke and white-hot sparks that can set fire to the papers piled on the surface of your MIG welding instructor's desk** there were almost no sparks and - this part was particularly eerie - very little noise. Just a brief sizzle as the arc started up and then a very bright light (which I learned later, can give you a sunburn if you don't cover all exposed skin).

Also instead of a weld that, as is often the case for me, looks like a semi-smushed metal caterpillar, you can more easily get a weld that looks like this. 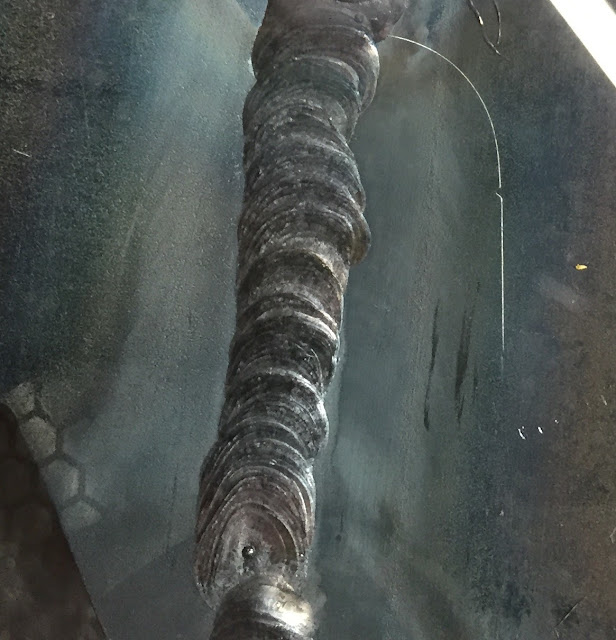 Admit it: if this weld was on Tinder, you'd swipe right.

But I didn't get that result right away. Practice came in two stages: the first was about an hour spent in Alex's workshop in Santa Cruz (thank you, Alex).

At that time I had a small pile of identical steel scraps I could practice with and try to weld together the exact same way so I could focus on technique, amperage and other variables. I also had a tiny piece of whiteboard that I used to write down what I had done so I could take pictures like this: 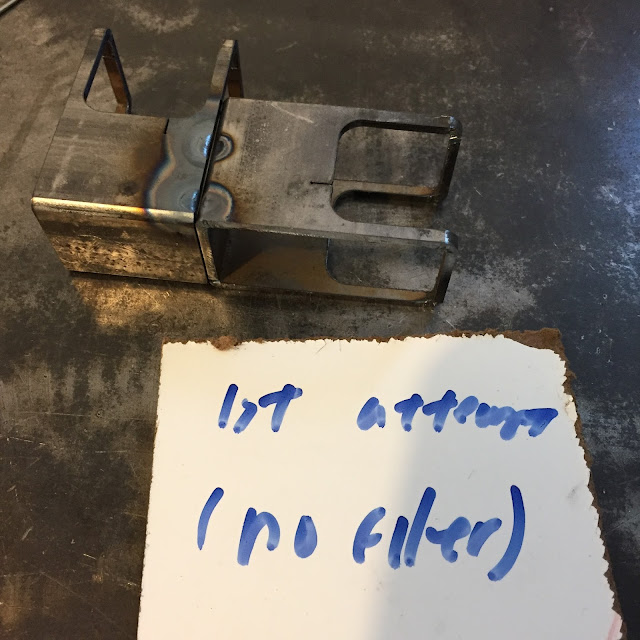 Welding while sitting down isn't something I did much - if at all - when MIG welding since my shop never had a table large enough to weld on and I was constantly repositioning myself to make sure the sparks or smoke would blast directly into me. But this is where TIG shows a quirk (you pretty much have to be sitting in order to use the foot pedal) and its value: without a ton of smoke and none of the violent sparks associated with MIG you can actually see more of what is happening with your work. You can see the arc melt the steel, you can finesse where the puddle of molten steel goes, you can control the speed you add the filler (since you're doing it with your other hand). 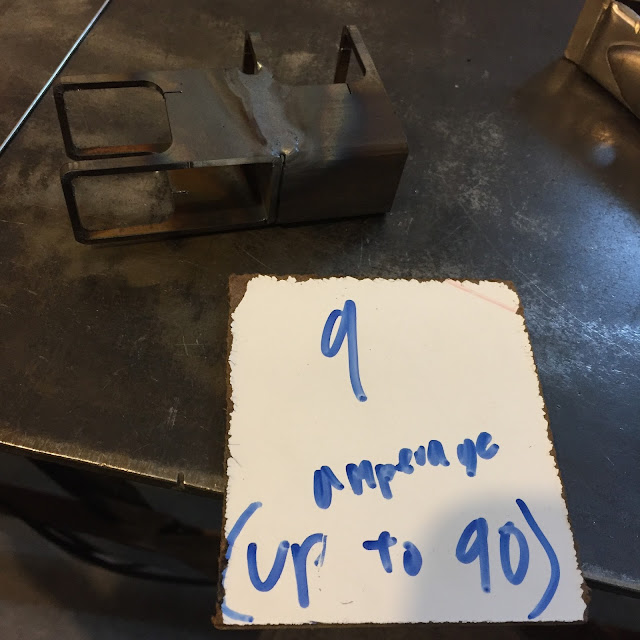 As I practiced I upped or dropped the amperage, used a short electrode, messed around with the amount of argon gas flowing, accidentally touched the tip of the electrode to the work (that is a no-no), dragged the electrode toward me or away from me, and so on. And I kept a record of it with my little whiteboard - always starting with a number at top (as in, the number of times I had welded the same two pieces of metal together).

After my hour at Alex's shop, I took advantage of my membership at TechShop San Jose (which recently reopened after their move) and reserved a TIG welder to continue practice. A box of the steel pieces and my little whiteboard came for the ride. 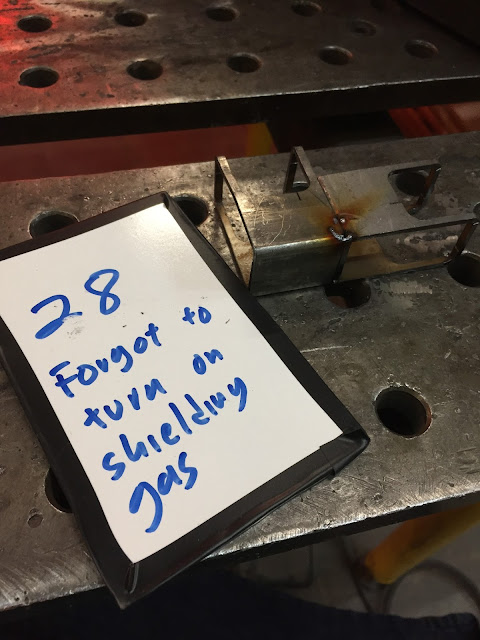 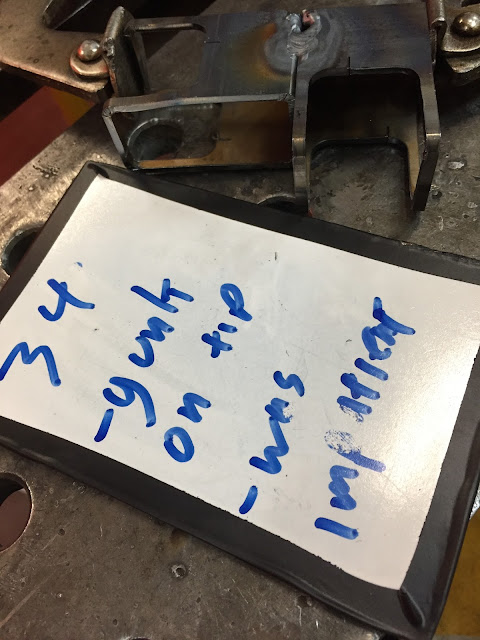 The mini white board technique did help me become more self aware as I worked. At the end of the day, the attitude of the person doing the welding is an important variable that I missed the first couple dozen times. When I flipped up my mask on Attempt #34, I realized I was the problem because I wasn't being patient.

I was clearly overdue for a long bike ride or a yoga class.

I began thinking of the poor woman from the X-Files episode Monday who tries to change the outcome of a horrible day she is reliving over and over. I could hear the words she desperately said to Mulder: "Until we get it right."

Until we get it right. 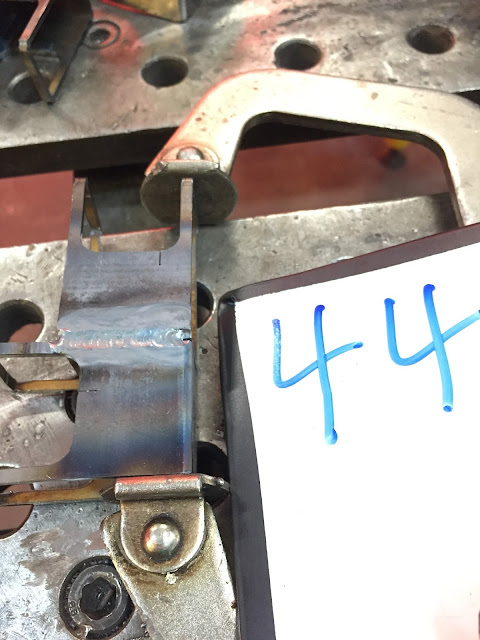 By Attempt #44 I had begun to isolate what things were leading to good results, and I was sticking with them. 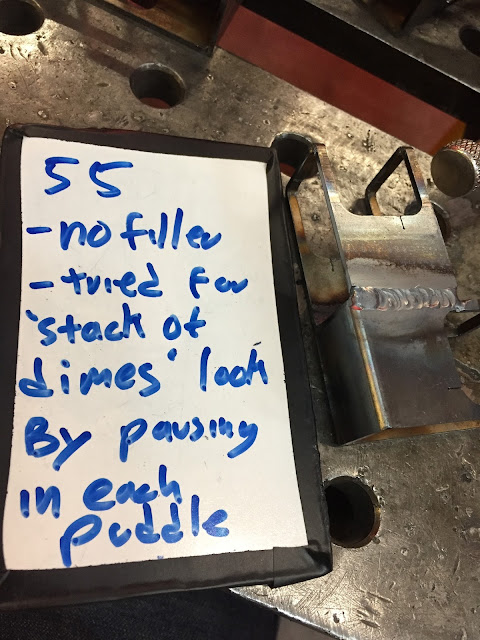 Eventually, I ran out of those little steel pieces. I figured out how to hold the TIG gun and move it more smoothly. And other things too - like being patient.

I've done more TIG since and have begun making cargo bike frame number three (you can see the first Box Bike by DIYBIKING.COM frame - which was welded by Alex - at the Silicon Valley Bike Festival on May 7th).

Before I forget another interesting thing about TIG is you can weld stainless steel together. So for practice I welded some old brake rotors. It made a pretty cool candle holder. 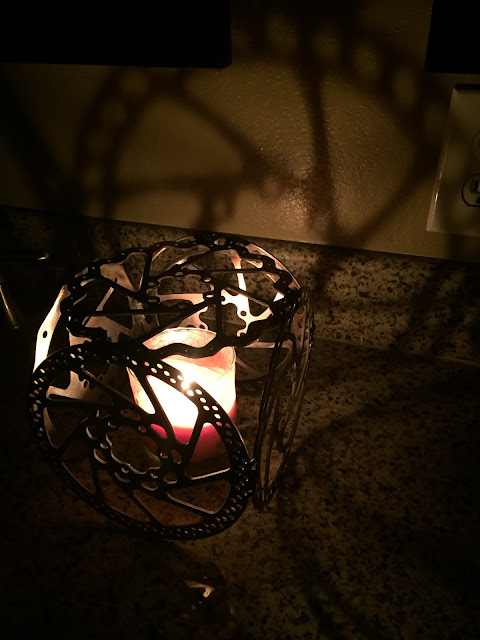 So that's TIG welding. If you want to learn how to do it I recommend the classes TechShop San Jose offers or look for their other locations and just get as much practice as you can until you get it right. Failing that, strong. Thanks for reading and thanks for riding.

*Tungsten is used because it has a ridiculously high melting point of 6,192 Fahrenheit. Also the symbol for tungsten is a W - you can see it go by in the extended opening credits for 'Breaking Bad' when Anna Gunn's name goes by.

**That really happened at the welding class I took in January 2014 at the Silvermine Art Center in Connecticut. The instructor was really cool about it but kept his papers in his desk from then on.