Cycle of Hope 2020: Biking for Affordable Housing with Habitat for Humanity EBSV 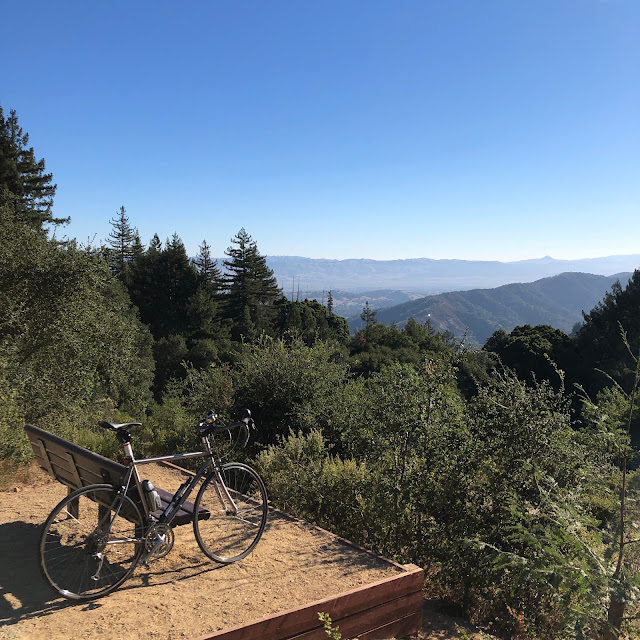 There's still time to register for the Cycle of Hope or you can donate to my page! Whoever raises the most in the 24 hour period of Saturday, October 17th will win a six-pack of beer from Lagunitas Brewing Company I don't drink but I'm excited Habitat for Humanity is closing in on their fundraising goal anyway :)

Today I went on the Habitat for Humanity East Bay Silicon Valley Cycle of Hope ride. You can do it too, but you don't have to wait for 2021 - you can do it anytime between now and October 25th.

That's because this event - just like most others these coronavirus days - is virtual. To Habitat for Humanity's credit, they leaned into the advantages of a virtual event.

You can do it anytime, you can choose your own route if you want, and the cause - the building of affordable housing - did not lose its importance during shelter in place.

Unlike last year, when I found myself in a lousy mood and decided to do the ride anyway (on my then-just built Back to the Future theme bike), this year I really wanted to do it and signed up. The problem I had was I didn't commit to the date and decided, literally this past Friday, that Indigenous People's Day would be the day that I'd ride.

Since I picked a 62 mile ride, I chose a route that would fill that distance. Going to Lick Observatory was an obvious choice but unsure the main building - and the room where the coveted vending machine and water fountain are kept - would be accessible since it had been closed due to the fires.

So I picked Mt. Madonna County Park as my destination. It is about 30 miles to get there - about the same as getting to Lick Observatory - but would involve about half of the climbing. That meant I could probably pack a 2 liter Camelbak and have enough water to do the whole distance.

Last night I gathered my cycling kit, several protein bars that were not expired - which is a big change for me - and a few other items. Then I sat down and checked my email, and found one from Cycle of Hope reminding me to download an app called RaceJoy, which would be used to track the ride. With an old iPhone busting at the seems with photos, I downloaded the app reluctantly, but after following several prompts I had everything all set in a few minutes. 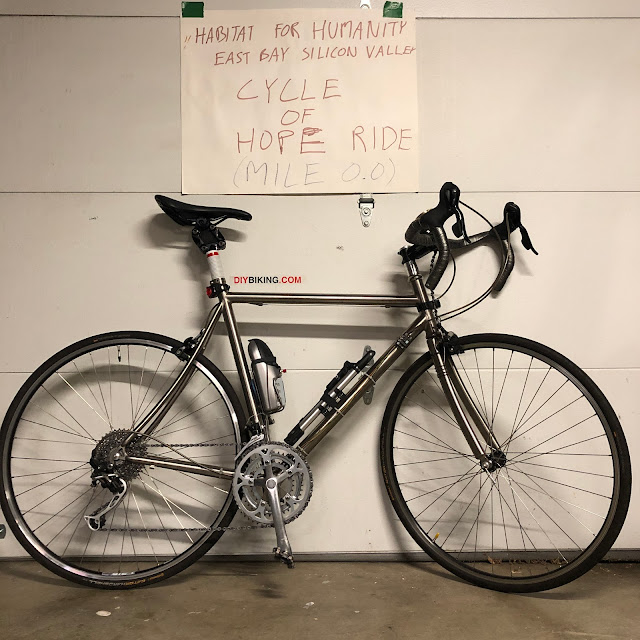 With the Back to the Future bike all shiny and tuned (since the 2019 Cycle of Hope ride I added a larger rear cassette for easier climbing, a Cane Creek Thudbuster seatpost for comfort, and a Flux Capacitor just Because) I headed off to my personal start line. 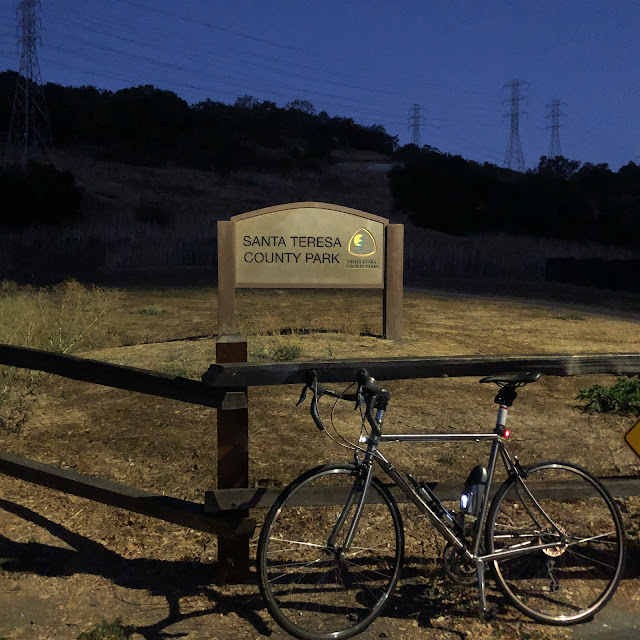 I switched on Strava, and then I opened up the RaceJoy app, selected my ride, and much to my surprise (and any nearby household that may have had the windows open) a recorded message played that welcomed me to the ride. Assured I had started the app properly, I set off - first heading to the Coyote Creek Trail. 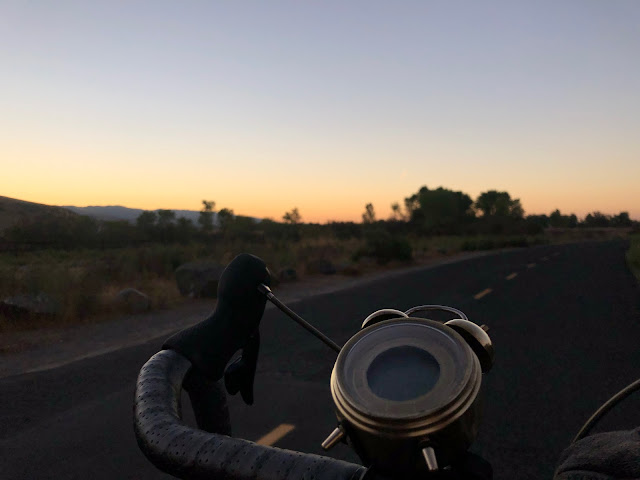 Over the past several weeks, I've used my old recumbent and my Box Bike Collective/Box Bike by DIYBIKING.COM cargo bike for riding, so the Back to the Future bike felt like a rocket as I headed into the 57 degree morning (thanks for the weather, Kari Hall of NBC Bay Area).

A few miles in, while I was still on roads, I heard voices coming from somewhere and I thought someone was blasting NPR from one of the cars ahead of me...but it was actually the RaceJoy app. Every five miles, a woman's voice would tell me about my pace and average speed, followed by words from a sponsor of the event (and one was even a story from someone who has gotten a home because of Habitat's work - I slowed down so I could better hear that one). If you have a handlebar phone mount I recommend you use it since I felt like I had tiny people talking to me occassionally from my waistpack. 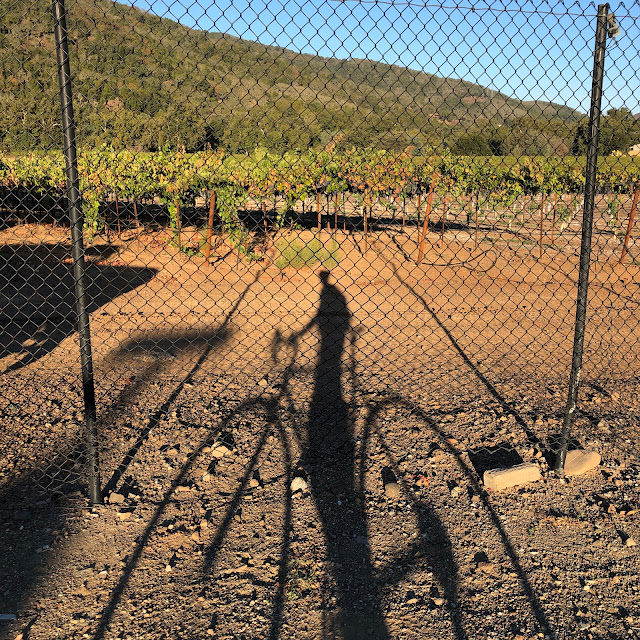 Vineyards always make me think of a friend of mine in Napa - and there are quite a few to see on Watsonville Road. The bike was working perfectly and I was feeling good about my time. 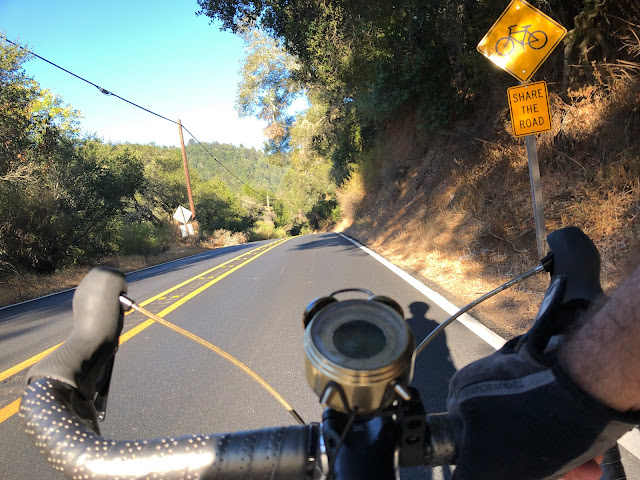 I pedaled up Hecker Pass Highway - a road that has so much potential. As you can see it has recently been paved, so the asphalt is very smooth. It also has a rumble strip in the middle of the road, which creates a disincentive for people to pull into the middle to pass a cyclist. With only a luxurious inch-and-a-half shoulder most of the way up, it was a white-knuckle stretch when cars would pass closely. But the larger cassette on the back paid off even though I didn't even go into the tiny front chainring for this part (I wanted to pass through this part as fast as possible). 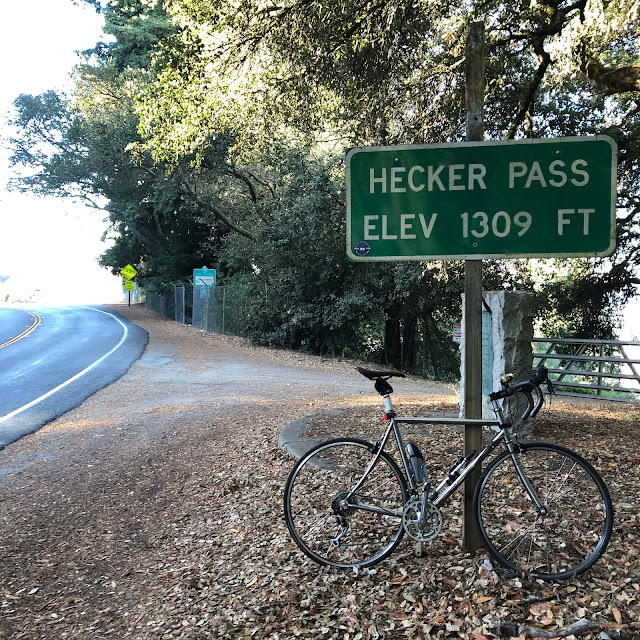 When I did reach the top, I did a lean against the Hecker Pass sign, and read the stone plaque just behind. Hecker Pass was named after Henry Hecker, who was behind this road and was apparently not a cyclist back in his day or he would have designed it differently.

A few hundred yards beyond is the long shuttered Mt. Madonna Inn. I rode up there to catch a glimpse of the Pacific Ocean before heading into Mt. Madonna Park, where I did use the tiny chainring to climb the first hill. Without any rangers around, I had little idea of what to do or where to go when I arrived, but I thoroughly enjoyed riding in the tall, Endor-like trees.

The RaceJoy app again broke the silence by congratulating me for hitting the halfway mark. It even suggested I drink some water, so I did as I listened to the message from the lead sponsor, Patelco Credit Union. I was even within sight of the bench overlooking the valley you can see in the first photo when I hit 31 miles. 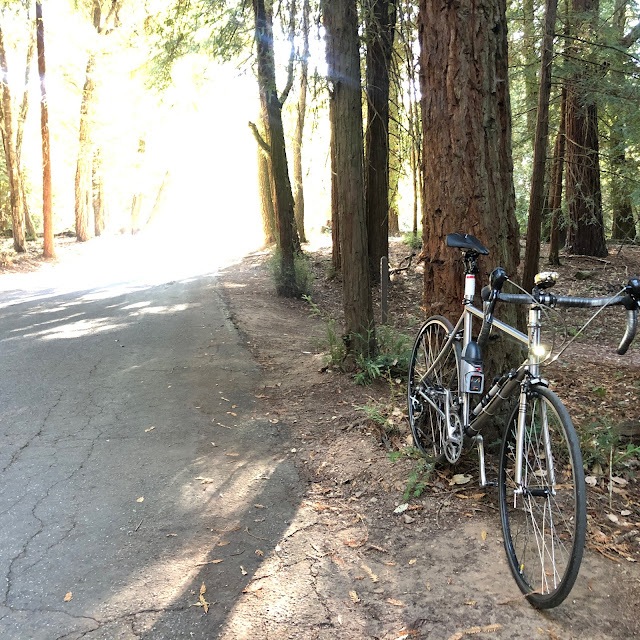 I tore open a couple of protein bars and ate in silence, trying to think about what to do next. I didn't feel like riding down Hecker Pass Highway, but I saw on a map Mt. Madonna Road, which looked like it led to Watsonville Road. When I arrived at the intersection for Mt. Madonna Road, I saw what I first thought was a crude, gravel driveway. But no: it was Mt. Madonna Road.

Then I remembered something a friend told me the day before. She was recommending Mt. Madonna as a destination and said she had been there herself and "the last mile and a half you're gonna want gravel tires."

I headed down the road that she must have been referring to not with gravel tires, but with the 120 psi Continental road tires the Back to the Future bike has had for over a year. 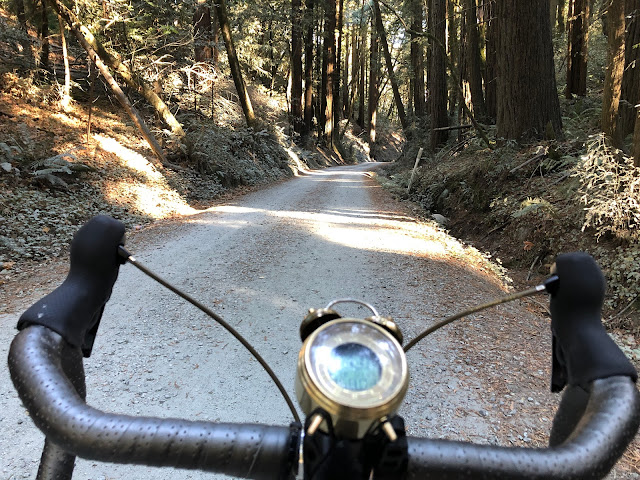 I had just enough confidence in my handiwork to be convinced the bike would stay together. Me personally, less so. Fillings were relocated from my teeth and eyeballs rattled in their sockets as I descended. I kept thinking of the trip I did on the Bike Friday years ago in the hills outside of Paraty, Brazil, where I biked on a similar mountain road on similar tires and the only flat I got on that trip was in the hotel room.

Thankfully, the rough gravel eventually turned into asphalt, so I was able to open up the throttle a little - but not before being reminded of my comparatively less-than-stellar time from the RaceJoy app. 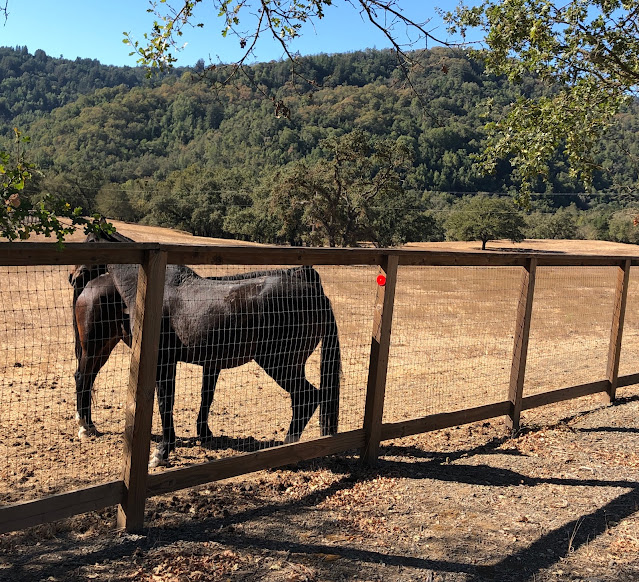 After passing several ranches I arrived at Watsonville Road, and was presented with a chance to head back on Uvas Road. I decided to do it and was once again presented with newly painted asphalt. But at that hour and on that road, there were few cars as I passed Uvas Reservoir. I stopped to prop my bike up on a conveniently-located stick and wondered if another rider had used the same stick for a similar photo earlier - or would later. 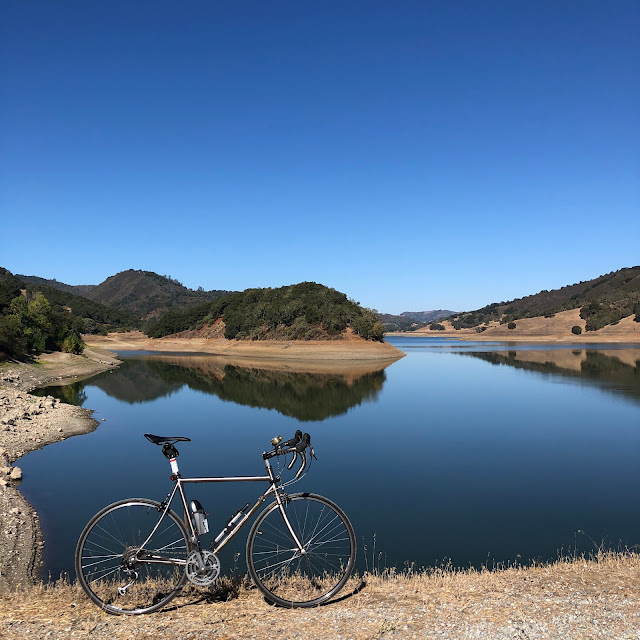 After several more miles, I knew I was closing in on the finish - just in time for lunch! - so I took a cool down lap in a residential neighborhood for about a mile as the congratulations message played over the RaceJoy app. I had completed the Cycle of Hope 2020 ride. There were no RouteArrows, no bumping into the publisher of Cycle California Magazine or the owner of the women's cycling apparel company Tonik Cycling at the end of this one, but it was still a great ride worth taking, and an adventure I wouldn't have otherwise. 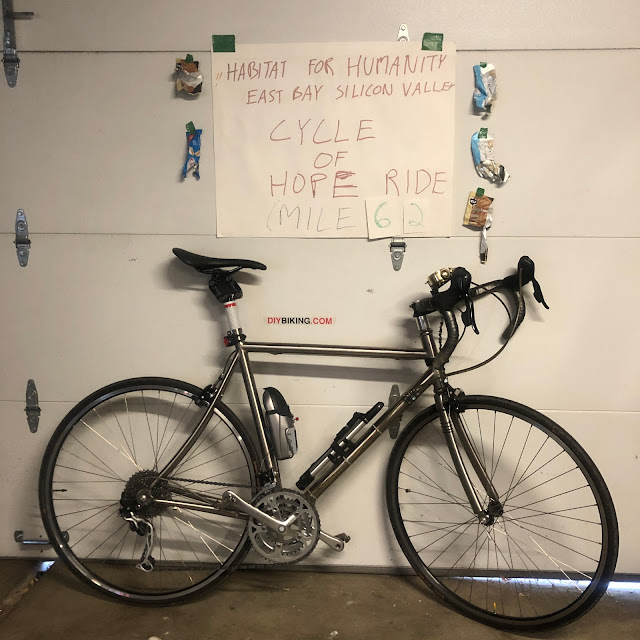 At my house, I leaned the Back to the Future bike against the door and updated my miles on analog. I also taped the wrappers of all of the things I ate on the ride as a general reminder to others not to litter. I went in the house and ate lunch.

Right now I'm sitting in my living room. I showered, changed, and have a Gemellos Murals coffee mug nearby that has her drawing of the San Jose skyline on it. It's quiet and it's peaceful, and everyone should have one of these things called homes.

Please make a donation to one of #MyNonprofits, Habitat for Humanity East Bay Silicon Valley, and/or register for the Cycle of Hope ride. Thanks for reading and thanks for making a difference where and how you can.