Let me tell you about my day yesterday.

I did some email early in the morning and headed out on the recumbent for what I hoped would be a peaceful and inspiring bike ride. You see, I long ago finished decorating my house and have already done my shopping for the people who are the easiest to shop for. Unfortunately, now that the Impossible People are left ("When I see something I want I just buy it!") Christmas shopping is coming up on the moment where it stops being fun and starts becoming a nuisance.

The ride was meant to change all that, and part of the reason was I was going to visit some toy stores since Domus, which is the charter school in Stamford that houses the Trafigura Work & Learn Business Center (still enjoying the tools made possible by Stacey!) has its Holiday Mall a week from today. What it does is allow less fortunate parents to pick out toys for their kids - and a volunteer like me will even wrap it if they like. I recommend you learn about and support the Domus Holiday Mall or something similar - Each time I volunteer I get one of those 'Thank-you-for-showing-me-the-true-meaning-of-Christmas' moments.

The recumbent was in fine form on the nine-mile ride into New Canaan, and my first stop was the New Canaan Toy Store; located just across the street from the railway station. I walked in, and immediately heard the sound of Run DMC's 'Christmas in Hollis' - excellent. 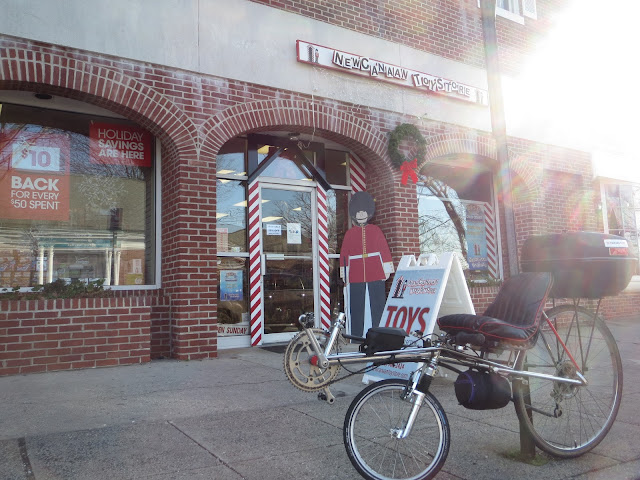 When shopping for a toy drive, I always try to pick out toys I'd play with, so I bought some Legos and Robotikits kit to allow one to build solar powered toys. They looked cool and would easily fit into the even better bike box.

Incidentally, the New Canaan Toy Store has a New Canaan-opoly game (which is what it sounds like). I immediately had two questions upon seeing it: First, is there a Stamford-opoly game? Second, why is Elm Street Books only $90? 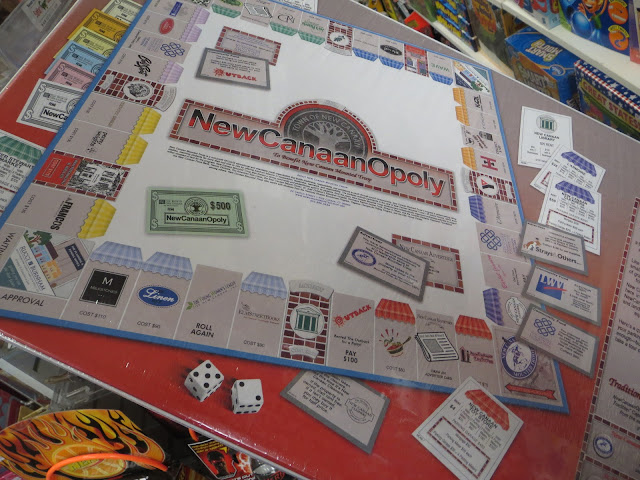 Next, I looped around through the municipal lot and stopped at The Toy Chest, which is across the street from one of my favorite coffee places, Connecticut Muffin Company. I had to walk the bike a short distance away to find something to lock it to (If you go, bring a cable lock and not a U-lock, since the former will give you more options for bike parking). 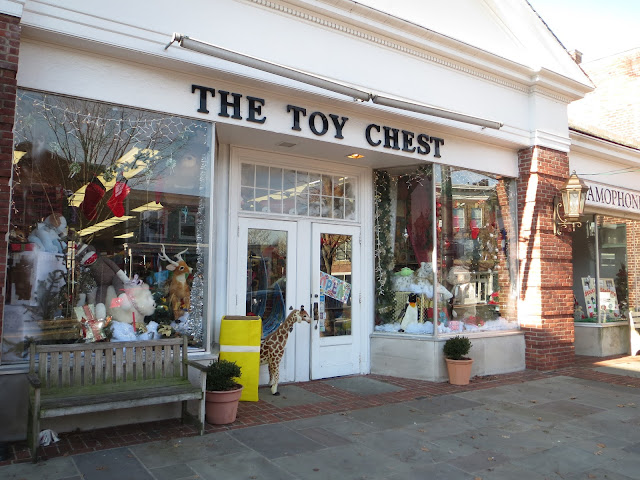 I had already shopped here before to buy gifts for my niece, and what makes this store special - aside from it being one of the last places on the North American continent where one can buy the now-discontinued Buckyballs (the store has a sign indicating you must be over 14 to buy them) - is its great selection of games. I bought Rush Hour from ThinkFun as well as a little paintable toy car kit before leaving the store.

Outside, I checked my phone and noticed a message from my cousin's wife giving me a few ideas as to what to get him. One of the ideas was not only good, but it was something I could do on my ride while I still had room in the even better bike box. I left New Canaan and headed south on 124 into Darien to Espresso Neat, another pillar of coffee shop excellence where I actually bought gifts for a couple of people.

It was there - now close to lunchtime - I opened my phone to look at Facebook. I am used to seeing status updates that make no sense - hovering cats and so forth - but this time there were several status updates that made absolutely no sense to me and looked serious. I scrolled up and down and noticed several of my friends - even some not even in Connecticut - where saying something about a shooting at a school in Newtown - which is in my county and less than an hour's drive from my house.

For the first time in a while, I pedaled home with lot less vigor than I had when I had started off. At home, my wife and I watched the news like everyone else. Twenty children were never going to see Christmas morning 2012. And like everyone else, we had no words.

This morning, I looked at the small pile of toys I had bought and thought about the Christmas gifts under trees in Newtown that wouldn't be opened by the child they were intended for. That thought bothered me more than my inability to comfort any of my friends with kids.

I can't make Christmas better for anyone in Newtown. But I can see what more I can do for other kid's Christmases - and make the day associated more with innocence and happiness for kids too small to understand what happened yesterday. There are a lot of pressing needs right now elsewhere, I know, but for right now, the one thing I know I can do is try to make someone else's Christmas better.

If this is the kind of thing you'd like to do too, please look around for a Toys for Tots donation drop-off location. There is one at the Stamford Museum and Nature Center, right in their front entrance. 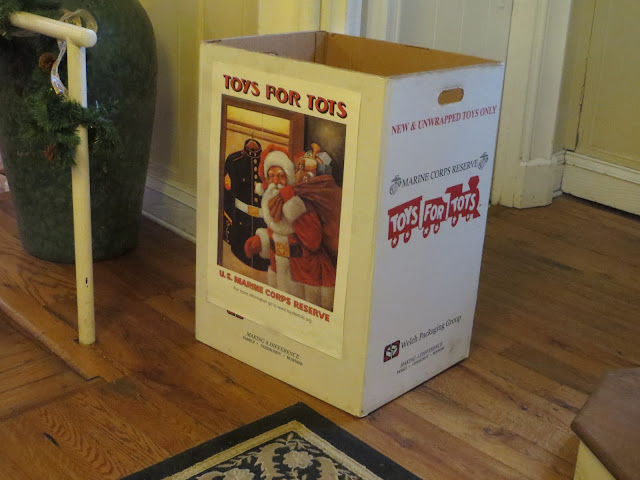 I learned this last weekend when we went there to see the gingerbread house exhibit - where you can vote on your favorite - and of course, see Bill Probert's Lego exhibit which takes up an entire room. I recommend taking kids there to see it this weekend - walk around it as slowly as you can to take it all in - the snow speeder is encircling the AT-AT walker, by the way - and just savor being there. 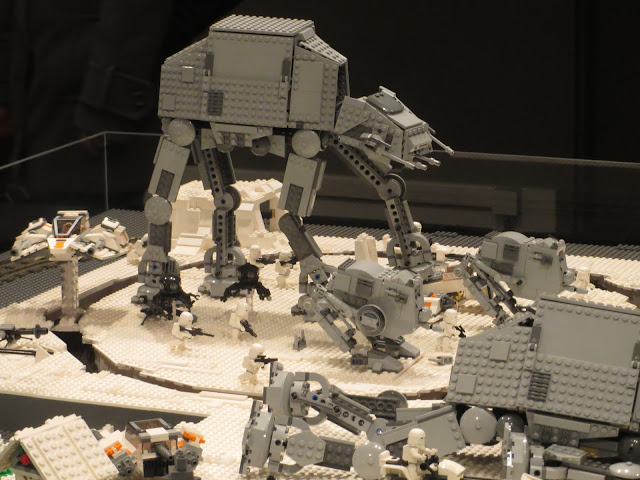 Whether you head up there to see the exhibits and drop off toys or not, I hope your day is merry and bright - and you can do something today to make someone else's Christmas merry and bright too. Eventually, maybe, the happiness and innocence will make it all the way to Newtown. Thanks for reading and thanks for riding. 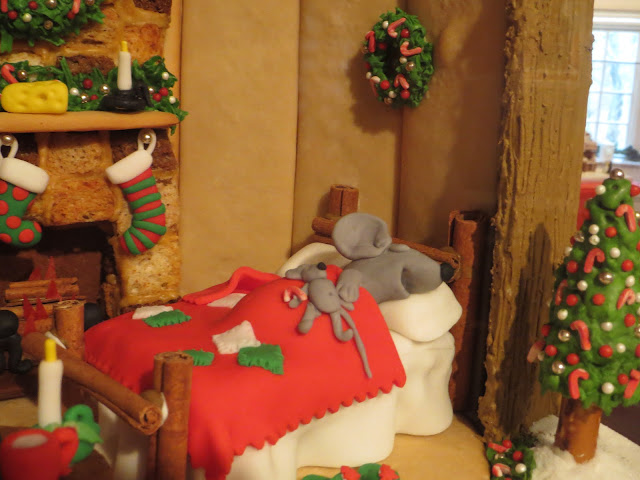