I space apart my trips to the dump just so I can peek into the Metal Only Bin more frequently. One day I came home with something even though it looked partially digested. 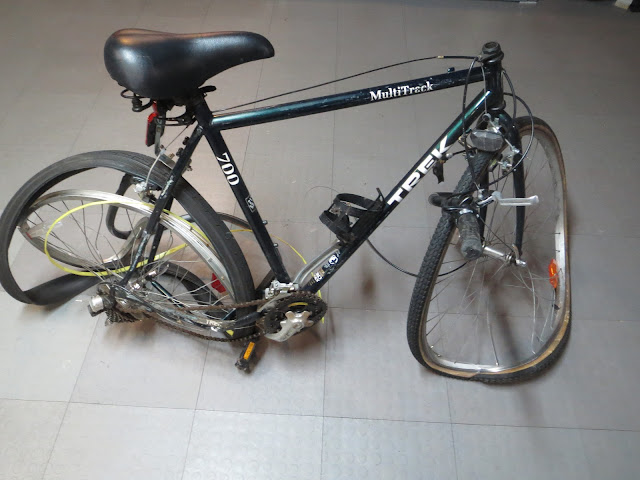 Most of the time I don't see the reasoning why some bikes are thrown away. Most.

I'm not sure what the driver Tweeted next. But I can guess.

Now I know I had no possible way of nursing this back to any sort of health: I was just beginning to get desperate in my quest for steel frames. You remember that thing I made that took five bike frames? Well, it took months to find that many frames but only a day to put it together. I have a true supply problem in my shop so if you are in possession of an old adult bike you want to get rid of and see featured on this blog - the older and dustier the better - please send me a note at connecticutmike (at) gmail.com.

I'm smart enough - just enough - to understand that not everyone sees old bikes the way that I do. But seriously, am I the only one who sees the not just the steel, but the other bits on this bike that are still salvageable? For instance, the pedals - but not the cranks - could be saved. 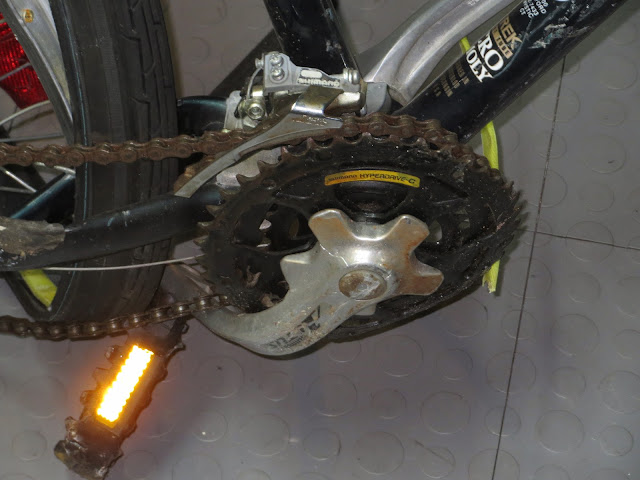 Also, the kickstand did work, but it the only reason it worked was that it had been snapped in half. Couldn't save it, unfortunately. But the bottle cage and wheel reflectors? Keepsies. 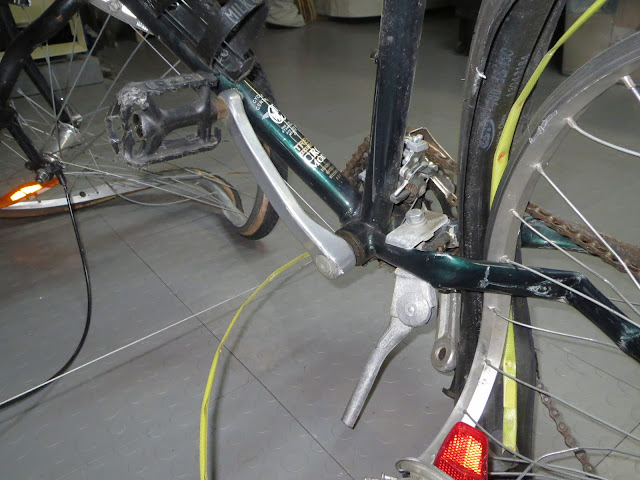 Something else that's pretty great about this bike? The rear Serfas Blinky still worked. I kid you not. This bike isn't going anywhere, but I'd feel safer sitting on it at night than most of the bikes I see tooling around Stamford after dark. 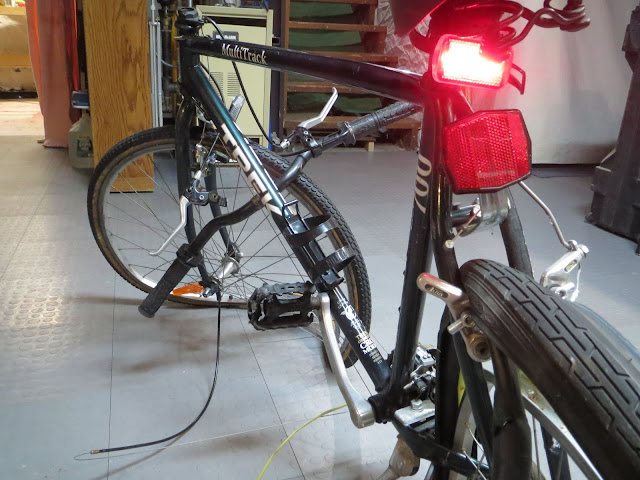 Once I wrestled the front wheel off the rest of the...pile...I noticed to my dismay it was still filled with air to the point of bursting. Given the shape of the tire, I carefully let all of the air out as I didn't want another pre-dawn explosion shattering the silence once again. 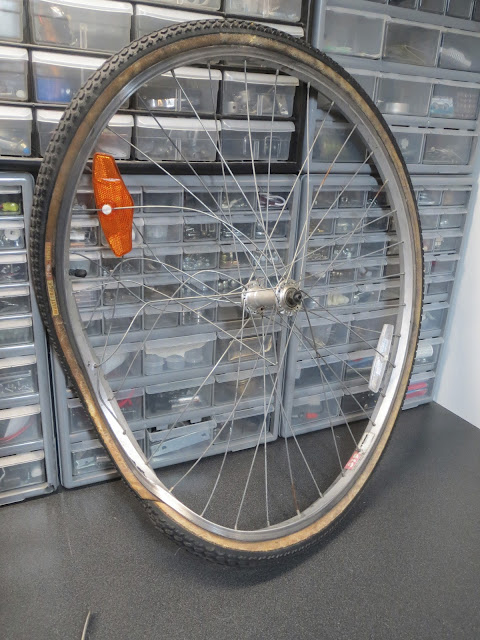 I used my standard bike tools to remove parts from the frame - and broke out the non-standard tools relatively quickly. A hacksaw blade - stupidly painted yellow - shed flecks of sunshine everywhere. 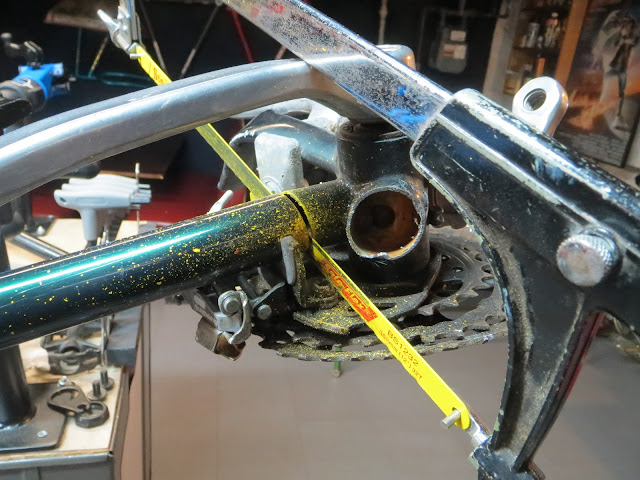 I ended up cutting the bike so frequently to get the steel I wanted (the entire rear triangle was so warped it had to be thrown out) I made an unbelievable mess of the shop floor. Not trusting that the Roomba would survive - or even begin to pick up - all the metal filings, I took an earth magnet and a thin piece of plastic and slid it over several feet of the shop. Afterwards, I learned my camera takes close ups fairly well. 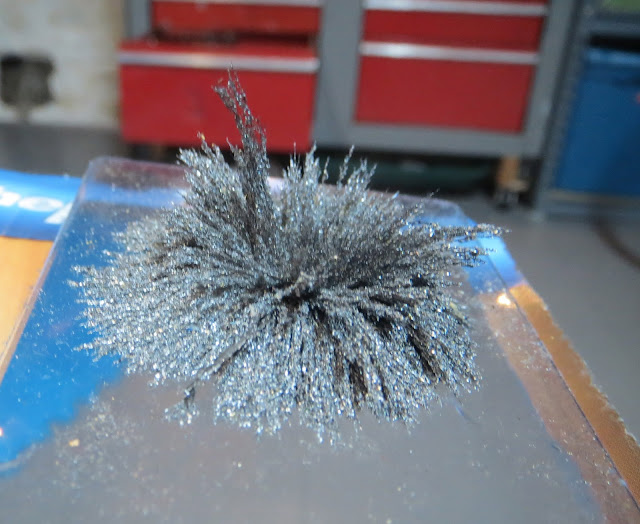 Finally finished, I ended up with a fork, a top tube, seat tube and down tube. Plus all the stuff pictured below. It was worth the messy floor.  I still need more to weld with, so do let me know if you come across a bike you don't want that you think I do. Also: make sure you look where you are going before backing up your car (or driving it forward, for that matter). Thanks for reading and thanks for riding. 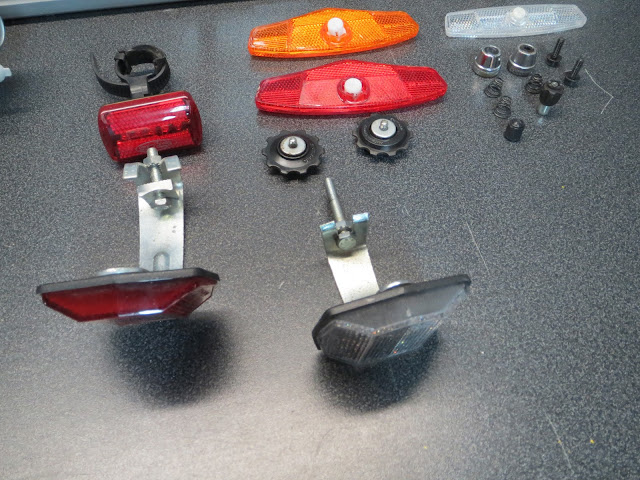