Unleash the Hipster Within: Build a Singlespeed 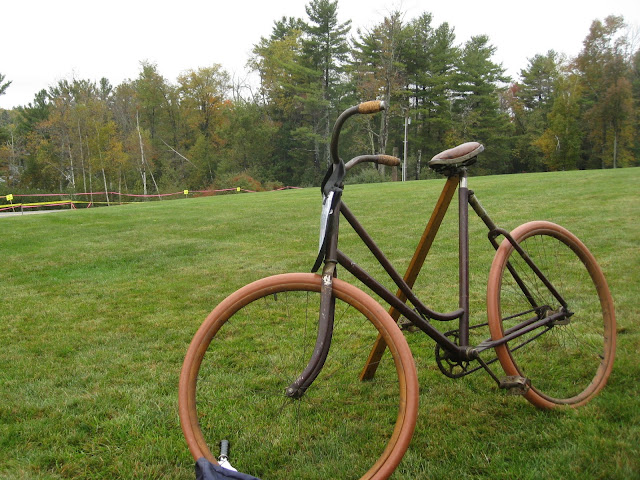 This is a Pierce Arrow bicycle from 1897. These pictures were taken at Franklin Pierce University at its 50th anniversary celebration this past fall.
The bicycle is so significant the university (which was a 'college' for many years) named its school newspaper after it. Or something. 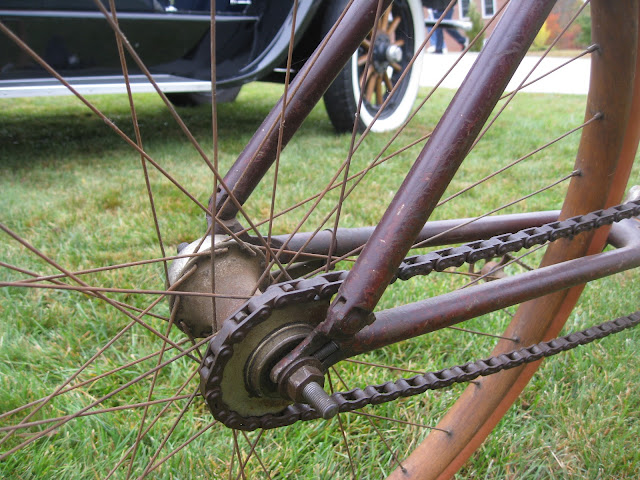 Even though the bike is 115 years old, it is quite striking that a particular piece of technology has stuck with bikes to the present day with stubborn-stain-on-clothing tenacity: the single speed. Common with small children's bikes that have pictures of superheroes on them and some folding bikes (like South Norwalk), the 8-track player of the adult bike world has somehow moved into the 21st century with a big following. As someone who visits Brooklyn from time to time and has biked in both Portlands, I see that the single speed bicycle is often used by hipsters - which I define as people who put way too much effort to look like they put no effort at all into how they dress.

I never understood hipsters, nor have I understood why they seem to favor single speed bikes. We moved beyond the single speed as a people. Speeds are good. Speeds are right. Speeds work. Why deny ourselves the ability to go faster on the straights or climb hills without hearing dead relatives beckon?

I'll tell you why: they're pretty easy to make…if you know what you are doing.

Yesterday, I had a day off from the Day Job and a gloriously extended period of time in the workshop. I needed to tune up my homemade mountain bike for an upcoming trip but this week I received an e-mail from Danny's Cycles indicating a tuning sale. I normally do that myself (starting with the recumbent as a way to avoid the inevitable laughter from bike shop mechanics when I'd bring it in) but with time in the workshop at a premium, I thought it was well worth spending $40 to drop off the bike in capable hands so I could do something more…interesting. 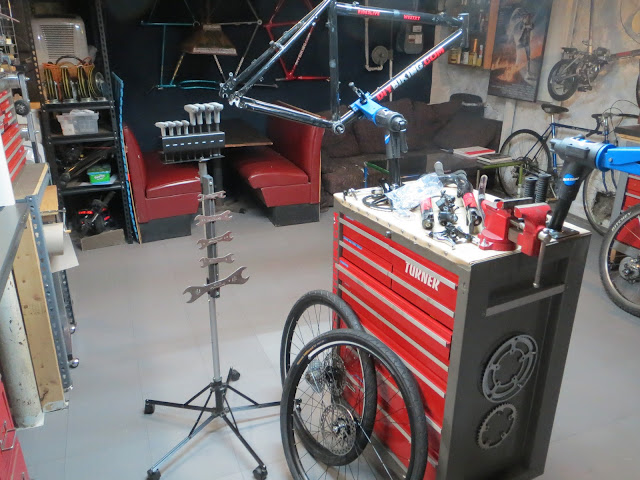 I decided to build a bike in one day. I don't recommend this. Building a bike is fun and one - particularly a novice like myself - should take as much time as possible to savor the experience and make sure you don't forget to install anything.

I actually had made the decision to build a bike yesterday all week long as I slowly found myself gathering several bits from around the shop to make it happen: the bottom bracket came from the Bike Friday when I put on the new chainrings and, more importantly, met Stacey. The frame was from the first mountain bike I made that had been hanging - completely stripped - on the wall of the man-cave portion of the shop for nearly a year. The wheels were the road tires I used on the mountain bike when I went to Manhattan to test out the new Metro North bike racks. The front fork was from the scrapped bike I picked up at Smart Cycles in Norwalk when I was putting more gears on the recumbent. The disc brakes were from the original mountain bike as well: even though they performed quite badly during my fantastic trip to Vermont's Kingdom Trails, I reasoned that on a single speed bike that would be almost completely used on the flat roads in Stamford's South End, they'd be alright. Everything else I needed was scattered around the shop - save for this. 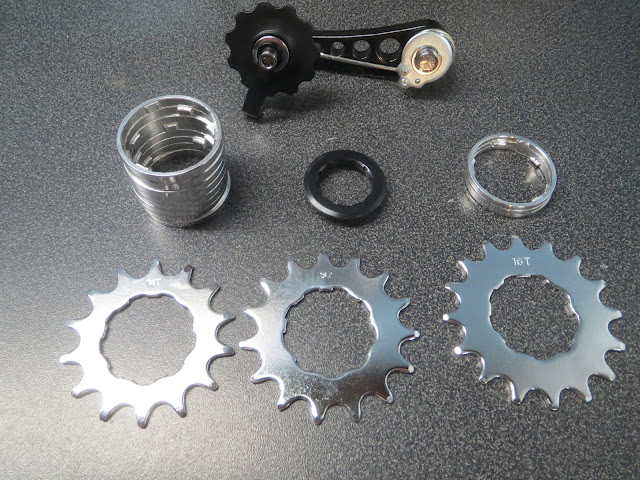 This is from Nashbar; a single speed conversion kit. It comes with whatever spacers you need to replace your cassette with one cog. It also came with a 'tension adjuster' which looked suspiciously like a derailleur. I didn't trust it - and later I realized my mistrust was valid - and that there is a class of bicycle products I wouldn't endorse at gunpoint.

I set to work with the stuff I knew how to do: I pounded in a headset with a rubber mallet (I know, I know…) and installed the fork. This noisy work I had to do in a 12-minute window of time as my wife was upstairs in her home office on a brief break between conference calls. Aside from the frequent dropping of tools - and later, bits of chain - that was the loudest it ever got in the shop that day.

A short stem (which gives most bikes really twitchy handling) was put in too but I might change it later. This was followed by an old carbon fiber Specialized handlebar I got from the Mountain Bike Jedi Master. Grips and brake levers I had in plastic tubs labeled as such, and the former slid on easily thanks to a little hand sanitizer used as lube on the bars (I probably should Google 'the effect of alcohol on the strength of carbon fiber' when I get a chance). 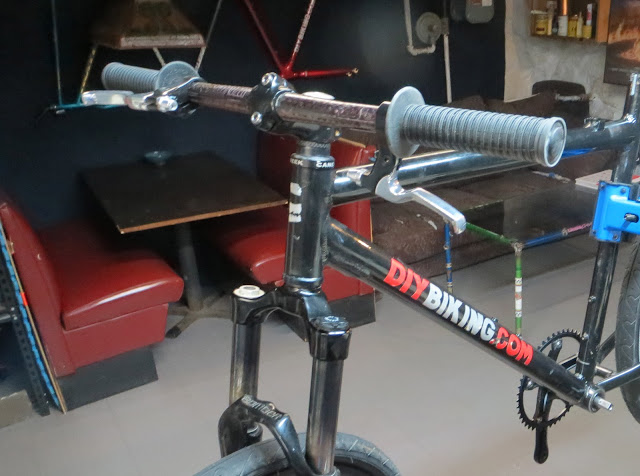 Then it was time to install brakes. It came a lot easier this time. There were still just as many tedious adjustments to make to ensure the discs didn't rub on the pads, but that was one area I was not going to rush: Don't listen to Joseph Gordon-Levitt's character from Quicksilver II (or whatever that movie is called): brakes are important and bikes need to stop the moment you want them to. 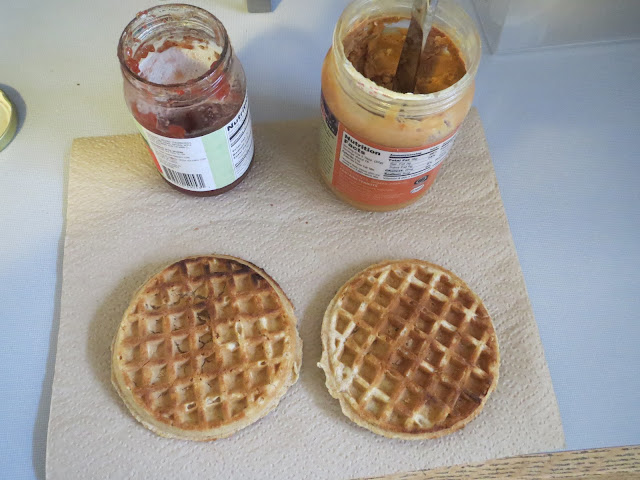 Now properly fueled, I had an easy time making the brake cables the right length with some shears from Park Tool. Here's another unpaid endorsement: they really work, and if you like your cables to flow easily in the housing, use them: The cable housing on the left was cut with the Leading Detergent and the cable housing on the right was cut with…well, you understand what I'm talking about. 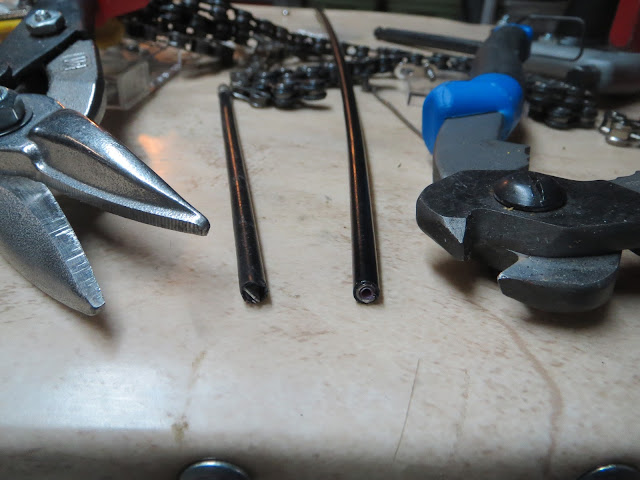 Now I had to remove the cassette and install the single gear. Even though I could feel trendy vintage clothing and fashionable sunglasses creeping up to me as I was doing so, this is a lot easier to do than you think: You need a special nut to unscrew the metal ring that holds the cassette in place (more on that in another post) and use your other hand to hold the Chain Whip tool- which is used to keep the cassette in place. It's a fairly simple thing: mine has a long blue handle and a little piece of chain used to hold the cog. Be careful how you store that tool, by the way: you don't want an innocent female friend to be in your shop one day and look at you suspiciously when seeing a drawer with 'chain whip' written on the outside. She might think you are into things you aren't really into. Like building a single speed bike. 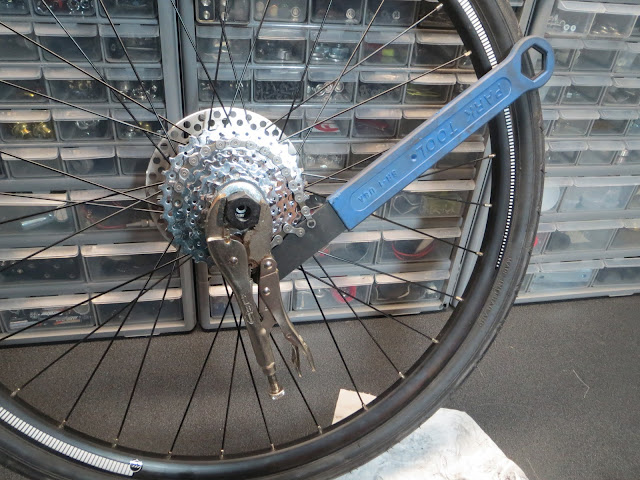 After putting the crankset in place (at 44 teeth it is a bit big for a single speed, but I thought it would work okay) I worked on installing the chain. I don't know if the hipster within was resisting the build or not, but this took a ridiculous amount of time for several reasons. One of those reasons was entirely my fault: Even though I was committed to using what was lying around the shop, I was using the wrong kind of frame to build a single speed: The dropout on the left is what most modern bikes come with: the wheel goes in one specific spot and a derailleur hanger goes underneath. Older bikes have dropouts that allow you to move the wheel slightly to adjust the chain tension. Take a guess which dropout my frame has? 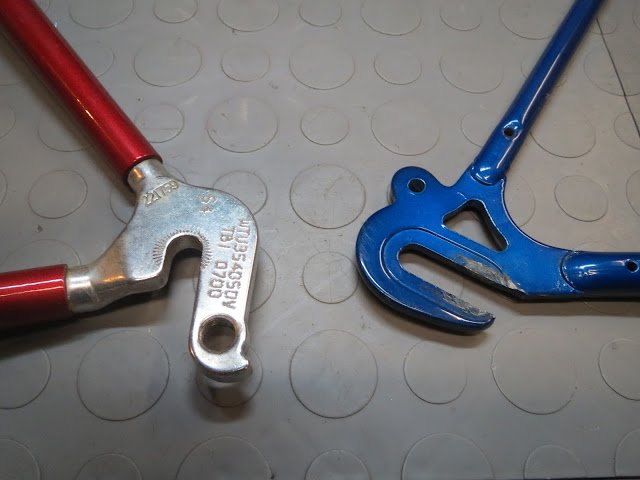 I decided I'd probably have to use the tension adjuster that came with the kit I bought from Nashbar, but the results were a disaster. No matter how I adjusted the thing, the chain sounded unbelievably, nauseatingly loud as it clattered through. I gave it my best McKayla Maroney-inspired smirk: If part of the reasoning for wanting a single speed had to do with reduced noise, that clearly wasn't happening with this.

To make matters worse, the single speed chain in my possession came with a link that wouldn't even fit through the tiny opening near the idler gear. 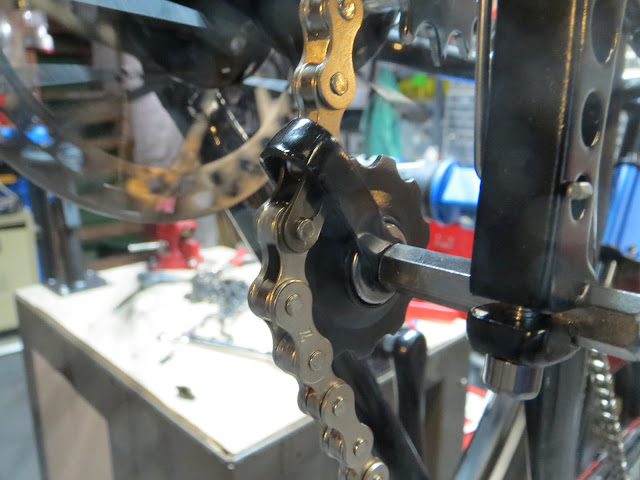 I ended up finding another chain, and I spent a better part of the afternoon trying different sized cogs to see if I could get the chain to connect with just enough tension so I wouldn't need the silly tension adjuster. Every time I tried it, I'd get a look on my face like Christopher Lloyd in Back to the Future when he tried to plug the clock tower cable in and found it was just short of connecting. 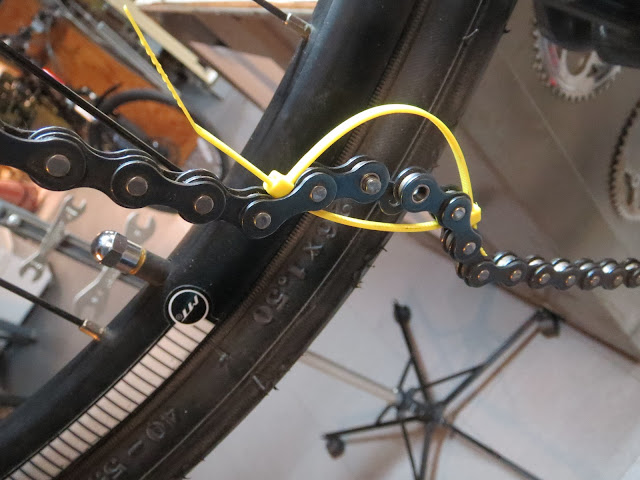 I ended up solving the problem by changing the length of the chain: I used a cog with just a few more teeth in it (which may mitigate the problem of the big chainring by making the bike a bit easier to pedal) that wasn't even in the Nashbar single speed kit. So this is just one of the reasons I keep such things. 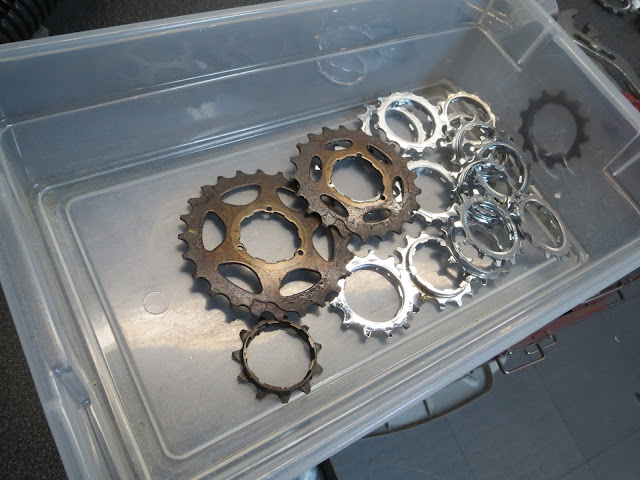 Finally, after approximately 31,000 attempts, I got the chain to join. While the bike was still on the stand, I pedaled it. It obviously wasn't a hill climbing gear, but it did move fairly easily.

Sadly, by this time, the rain we were promised yesterday began falling, so I was unable to take it outside. However, I borrowed the seat and the seat post from the Dahon Matrix and gave it a ride from the water heater to the clothes dryer and back again. It doesn't start rapidly, but it did move easily, roll silently, and stop quickly. Not only that, but with all of the extra gears, cables and other bits, the bike looks - and this next word is the sum total of the advanced English classes I had in high school: nice. 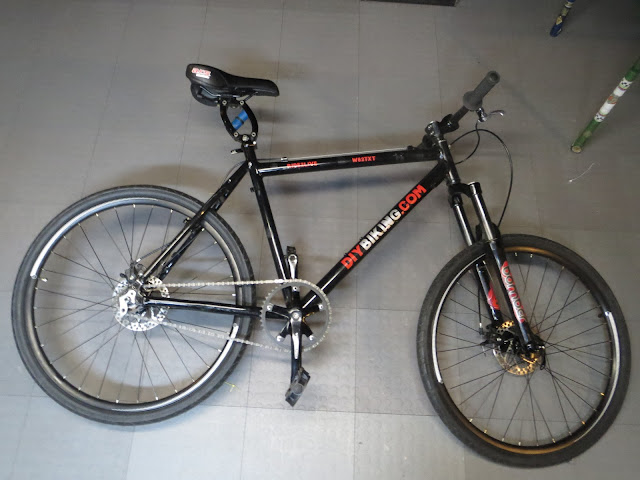 So, there you have it. I am stopping short of saying the hipsters are on to something with their obsession with single speed bikes, but if you live on level ground, have the proper kind of frame and the proper frame of mind, you too can build a single speed bike - for no other reason but to enjoy a day in your shop. Also, I suppose if you live in a walk-up and have to carry a bike upstairs frequently, the weight loss is probably helpful.  I'll see how this bike performs in the real world another day, but for now thanks for reading and thanks for riding.