This is my phone: a Droid Incredible II. 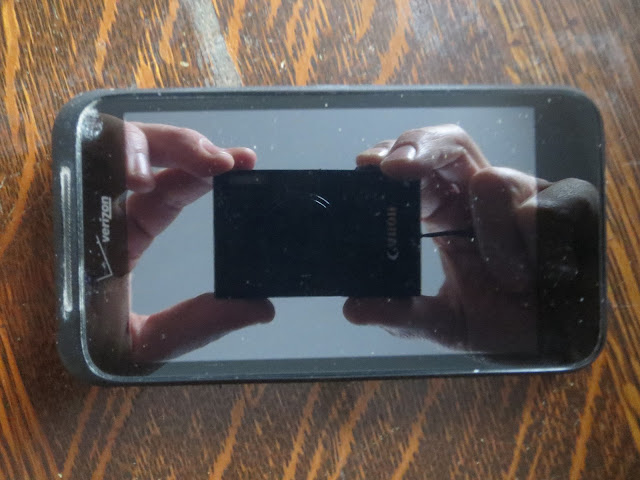 Please understand that I don't need to do all of the cool, funky things you see in the Apple commercials. This phone makes outgoing calls. It receives them as well. And while the web interface isn't anything iSmug 5 owners would approve of, it was good enough for me to find Stacey and has a pretty good camera on it.

Now you might own a phone that looks like this (rectangular with a glass screen) and you might ask yourself: what should I do with this when I go on a ride? You may be asking yourself this even more now, because the weather forecasts are growing less painful by the week so you may take a ride on a moment's notice.

Suppose you are going on a simple road ride. You could slip it in your jersey pocket and travel light. But you could also attach it to the handlebars with one of these. 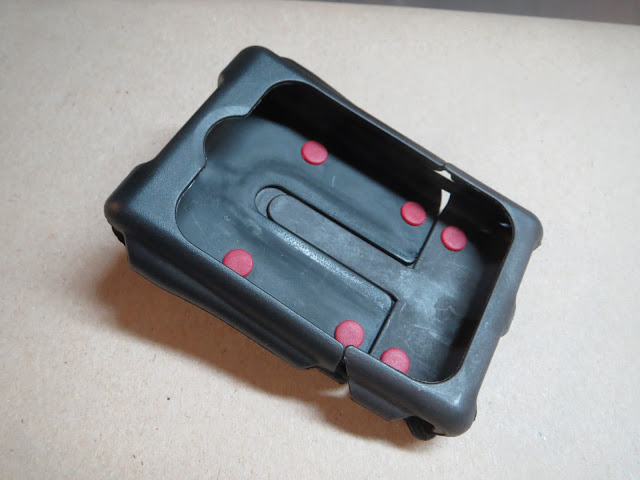 I forgot who makes this and can't recall where I bought it or why. I bought it thinking I would use it. I don't.

I imagine it is for people who use navigation apps on their phone. I have no idea who these people are. On my phone there is such a glare I can barely see my screen under normal, indoor conditions. Besides, if I'm on a ride I want to make sure my phone will still have enough battery power to call for help if I crash.

So I usually put it a bike bag or a frame bag. But still worried about how the phone would survive in the event of an impact, I bought this. 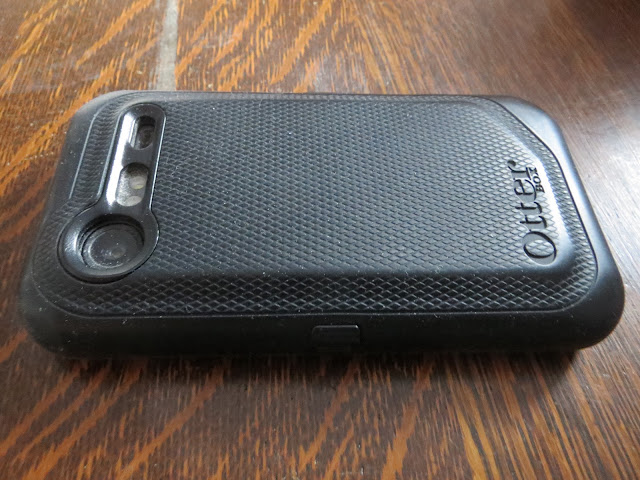 This is an Otter Box case. I was checking these out at Radio Shack one day when one of the clerks came over to see what I was doing.

"These cases are great," he said, pulling one for his brand of phone off the shelf. "Watch this."

In moments, he snapped his phone into the case and hurled it across the store. It bounced off the floor, paused (in mid air, mind you), and crashed into a display case where it knocked several items to the floor.

Okay, the middle part didn't happen. But what did happen is I decided then and there I was sold on the value of the Otter Box while the clerk sheepishly ran over to retrieve his phone. I hope 'The Shack' gave that guy a raise.

The upside of the Otter Box is that it worked. My phone bounced out of my jacket pocket while I was riding the Bike Friday down 106 from New Canaan a few weeks ago. It hit the ground at about 20 miles an hour and lived to call again. I also know that one fell off the roof of a Mini Cooper and survived - because I found the phone on a bike ride and, after interrogating Siri, returned it to its rightful owner.

The downside of the Otter Box is the size. It makes the phone bigger, and as I've noticed by observing the last couple of years of phone development, the phones themselves are getting bigger. I don't need to carry a small flatscreen around with me, and I worry that whatever phone I get next will be so large I'll have to pull it along behind me on a small trolley.

Still, as long as my phone holds its own, I'll keep happily using it in the Otter Box, and if you have a phone that looks something like this, you can probably get one too.

Now I'm aware that some of you may take your phones on rides that may involve wet conditions. Otter Box or not, you should make sure your phone can stay dry. Four ways to go about this: one is to put it in a Ziploc bag. Two is a marine-grade waterproof pouch, such as this one from Seal Line. 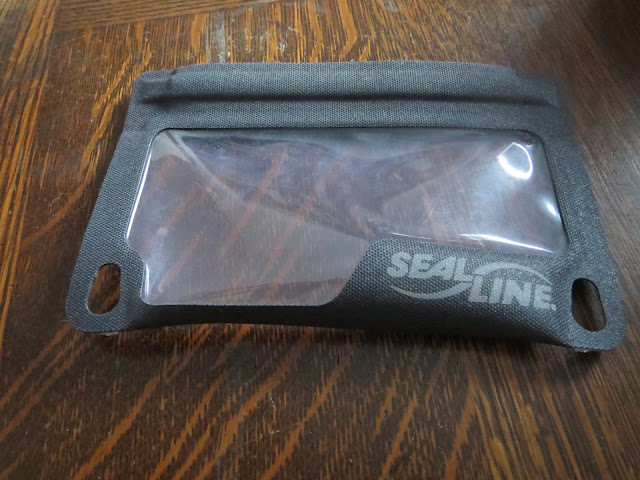 The third way is to put the phone in a waterproof top tube bag. Here's one I bought last year that I attached to the recumbent: it is in easy reach, isn't likely to pop out, and stays dry in the rain. 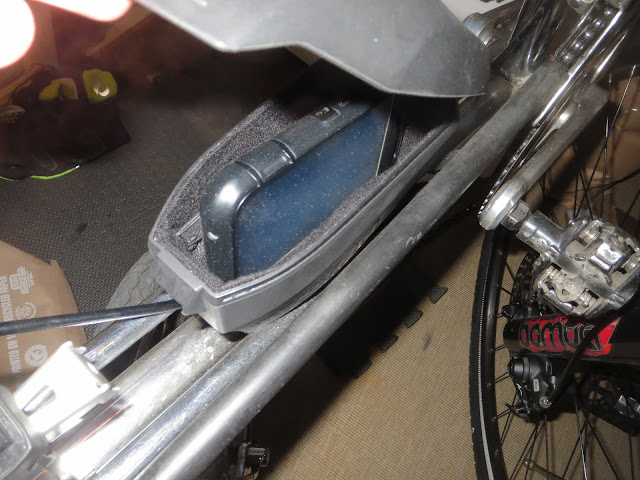 The fourth way is my favorite - and THE preferred method when mountain biking on rough terrain: it keeps the phone dry and in a lightweight, durable box that fits easily in a backpack or clips to your waist. All you need is one of these. 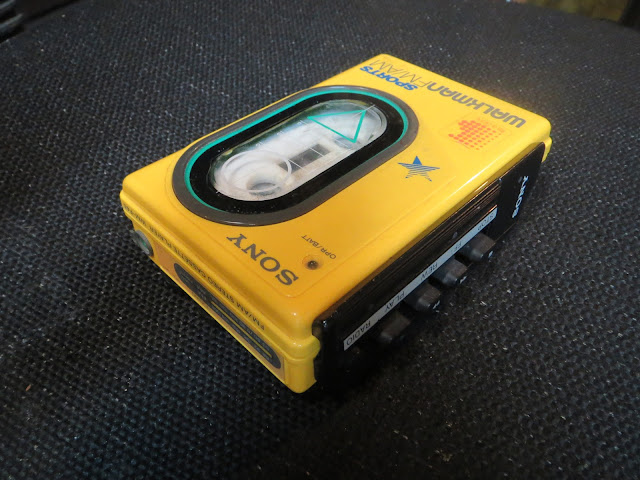 Yes, this is a Sony Sports Walkman (they still make it, but not like this). Known for its clamshell casing, it was used to house tape cassettes. Well, one cassette. Before humans were seemingly born with white cords hanging out of their ears, they had this. If you wanted to skip over a song, you had to push a button called 'fast forward' and try to use visual cues (for instance, looking in the window to see the tape cassette spin) to find out when the song you were trying to skip ended. And if you went too far forward, you'd have to hit a button called 'rewind.'

Music was harder to listen to back then. But it was also better, so go figure.

Anyway, if you have one of these Walkmans, you're in luck. Because if you open it, you will find that the tape player part is held in place with several tiny screws. In minutes, you can hollow it out with a tiny screwdriver. 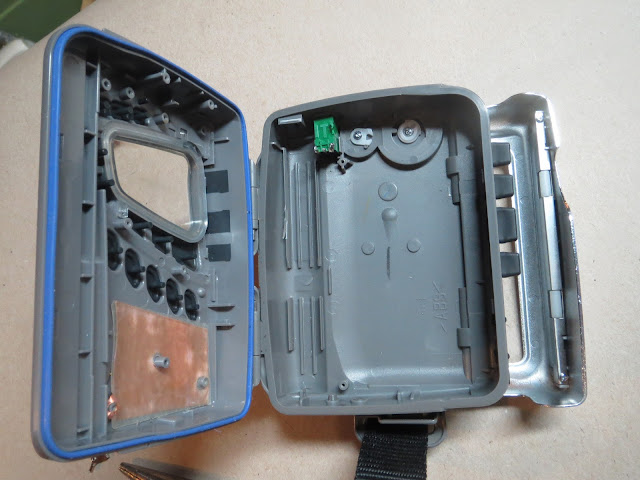 Then go to the hardware store and get yourself some green, self-adhesive shelf liner. It doesn't have to be green, but it does have to be self-adhesive so you can take a pair of scissors and cut pieces of felt to stick to the inside of the hollow box. Just like that: you've got yourself a water-resistant box. 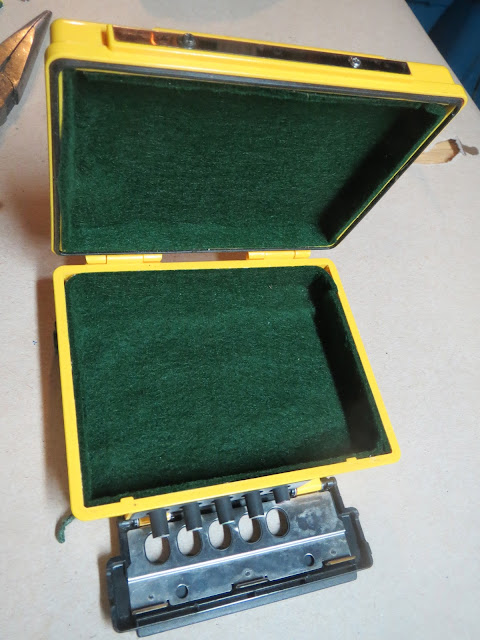 Now granted, only a very large Sony Sports Walkman will accommodate a modern phone. So that's what I have. I don't even need to take my phone out of the Otter Box; it fits in  beautifully and is even held in place by some hook-and-loop straps I glued into place. Only Dr. Who has a cooler phone box than I do. 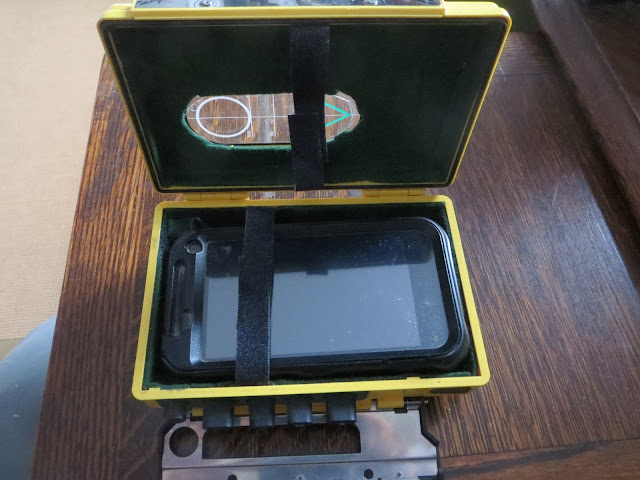 Because I had absolutely nothing better to do one day but to watch an episode of the X-Files on DVD ('Drive' from the sixth season; a fantastic episode that also helped Bryan Cranston land 'Breaking Bad' years later) I made this one extra special by making the headphone port into a little extension cord, so I can listen to music when I use this with my iPod Shuffle: I just need to press play and close the lid to listen to music in classic 1980s goodness. I also used to never turn heads at the gym - but now, when I am clutching this while on the treadmill, I get noticed. 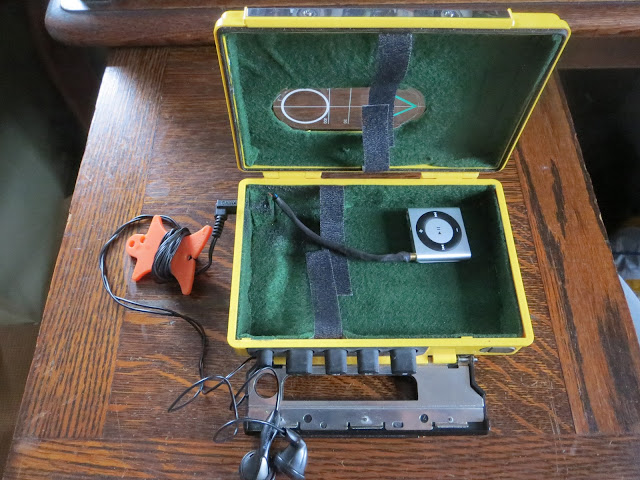 But I mainly use this for stowing the phone when mountain biking - and if I crash and my belongings are scattered all about, the bright color makes it easy to find.

Now I do have to point out I do not condone the use of the phone - in or out of the DIYBIKING.COM Signature Phone Box - while actually in motion. I get annoyed seeing people in cars talking on their phones (even more so at the ones who still insist on talking with their hands) so let's not be ridiculous-looking and unsafe. And let's face it: part of the reason to ride is to unplug from everything you are plugged into during the day - it's just good to keep the phone in a secure place so you can use it when you're done.

And if you want to take a ride with me, call me sometime. I can usually get the phone out of the phone box on the fourth ring. Thanks for reading and thanks for riding.