Honda: Bring Back the Element

My reasoning was this: I liked the height of the Wrangler. I felt that I needed something with cargo space to carry bikes around. I wanted something with short overall length so I could parallel park in Stamford easily. The two rear seats remove for a lot of cargo space, as you can see below. 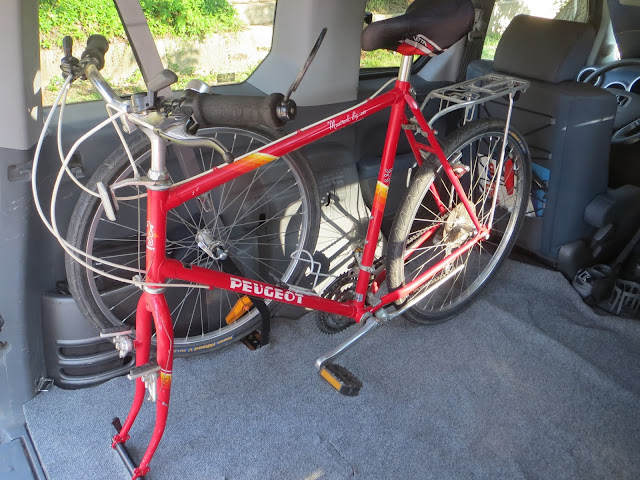 Now I must explain something here: This is of course the red Peugeot I used in my National Bike Month Challenge. I rode it more than 112 miles (on trips I would have used to take the car, so this $20 garage sale bike paid for itself). As you can see I removed the DIYBIKING.COM cargo box and put better tires on it. It's making a final journey I will write about later - and for the NSA employees who are reading my blog - or my drafts, for that matter: I am not giving this bicycle to Edward Snowden.

But back to the Element: It has waterproof floors which shrug off the mud after mountain biking. Four-wheel drive so I could go anywhere in the snow. And fairly fuel efficient for a four cylinder engine. And it looks different. My cycling friends may abhor SUVs, but this one is about as less evil as it gets.

But Honda has let me down by discontinuing the Element.

Yes, the Honda Element is the Google Reader of cars…or the Arrested Development of SUVs: loved by few. Misunderstood by many.

Honda, what are you thinking? I'm not going to buy one of those dull-looking CRVs or the Pilot when the reaper comes to collect my Element. Look: it was a good car. A great one, in fact. But you really messed up the marketing.

Here's what I'm talking about: the commercials featured things like fun-looking Gen-Y people throwing frisbees through the open doors and so forth. Nobody does that. Nobody. Besides, with so many less-expensive choices and with kids carrying so much college debt and so forth, the Element was out of their price range. Now Honda could have had a commercial that featured, for instance, a triathlete from a Pacific Swim Bike Run spin class stowing their price carbon-fiber bike and their wetsuit in the back (remember: waterproof floor!) as they have their adventure. Hey, tri-shops could have sold these things on the side.

So I'm hoping Honda will consider bringing the Element back and market it to cyclists. I know cars and the car culture does more harm than good, but if you must have a car, it should be an Element. That sounds like a good pull-quote for the brochure, doesn't it.

Now if Honda moves forward and rights this wrong, they should consider borrowing my interior bike rack design and pay me royalties. They also need to address one other area of design fault I've found in the Element: the center console cup holder. 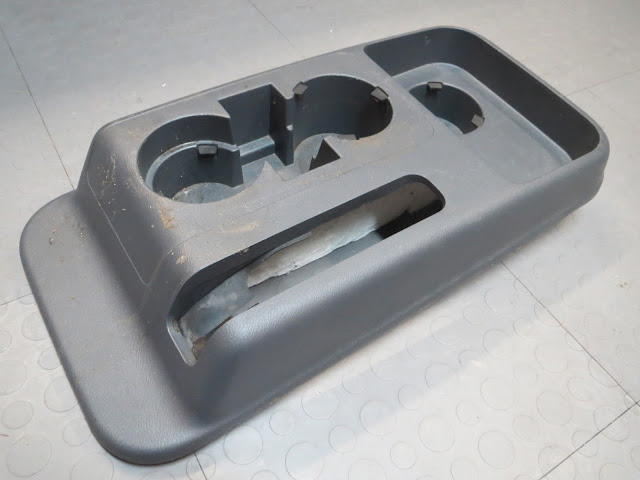 Here it is on my basement floor, but you know what a center console looks like sitting between the two front seats. The gross-looking spills are caused by either me or my passenger setting drinks in the holders, which are too low to reach easily when keeping one's eye on the road.  It also has a random cup holder in the back. You'd think it was for the rear seat passengers but the two 45 pound rear seats (which I almost never carry in the car) each have their own cup holders anyway.

Honda: here's what you do:  A center console that is configurable in ways that cyclists would enjoy and appreciate. Here is a prototype of what I am offering, so get your royalty checkbook ready. 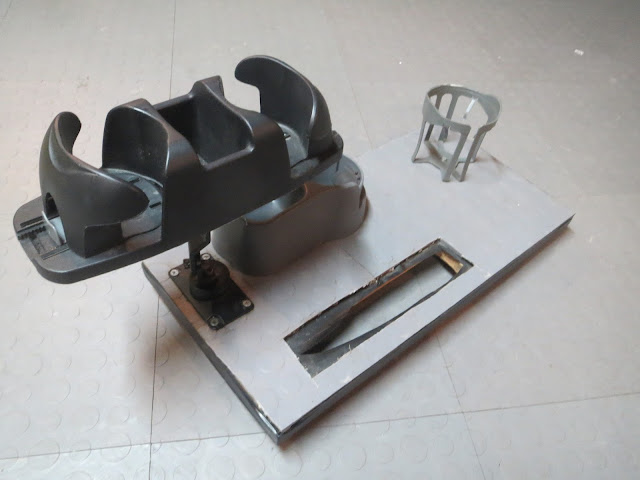 This is what I made: A durable piece of plywood covered by…as you can obviously see…surplus interlocking garage floor tiles. The crowning touch is that the opening for the parking brake handle is lined with a piece of scrap bicycle tube. Honda: you will have absolutely no trouble finding scrap bicycle tubes with which you can make this. All those crunchy-granola, Subaru-driving, meat-avoiding people should love that you're using actual recycled material in your (my) design.

I also have raised the cup holders with the aid of a cheap one from Target (this is just a prototype, remember). The apparatus used in the raising were a few metal bits for a 1980s cell phone mount. I must have spent a half hour sitting in the driver's seat figuring out the optimal distance my arm could travel with a drink so I could lower it into the cup holder without looking to see where it was. It also features additional holders for drinks or bottles that can be moved wherever they are needed. 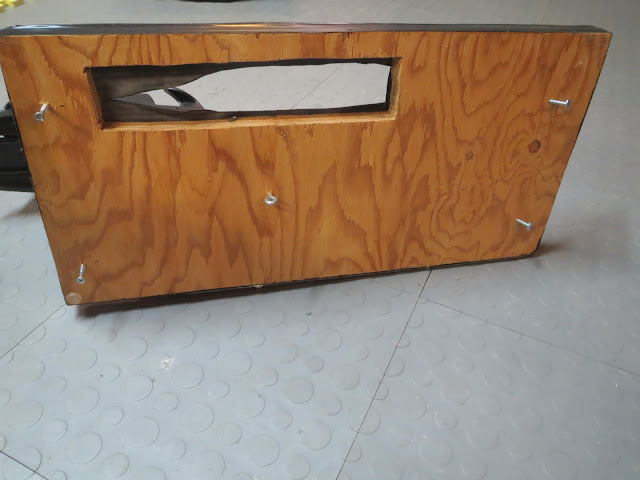 It took a small eternity to make the bottom work in such a way the console would sit in the opening without moving around. But with a strategically placed hidden bungee cord, it fits in the spot well. 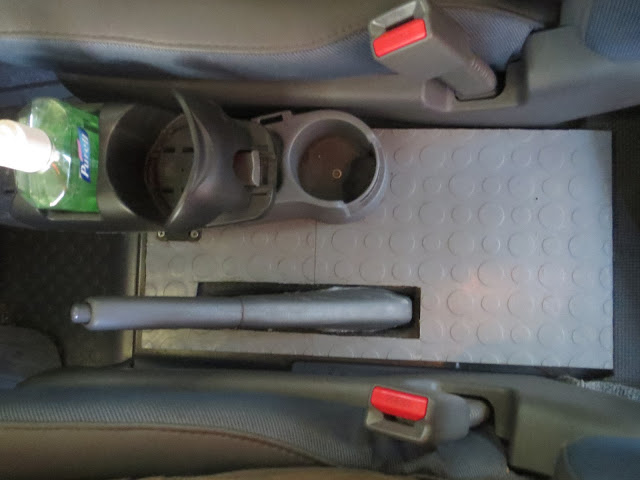 Now this is a good configuration if you have a passenger who needs to step between the seats for whatever reason, since it's a nice solid surface to put your foot. 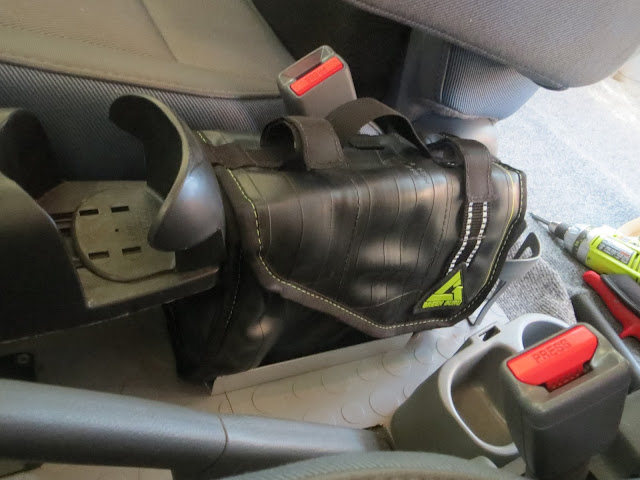 Here we go! It's a Green Guru insulated handlebar bag. It is attached to the passenger side seatbelt and a small aluminum strip keeps it in place if the driver or the passenger opens it up to get a cool drink. Yes, Honda: try for a partnership with Green Guru, which makes a number of cool bike bags and other accessories out of recycled material. It will go a long way towards better bicycle owner/automobile owner-relations.

So in conjunction with the bike rack design, I am hoping that putting these ideas forward will convince Honda executives to put down whatever it was they were smoking and bring the Element back. If you can find a more attractive actor to portray me, I'll even allow my likeness to appear in the commercials. I'll await your call to negotiate royalties. In the meantime, thanks for reading and thanks for riding.
Posted by Mike at 9:05 AM