Free to a Good Home (in Cleveland) 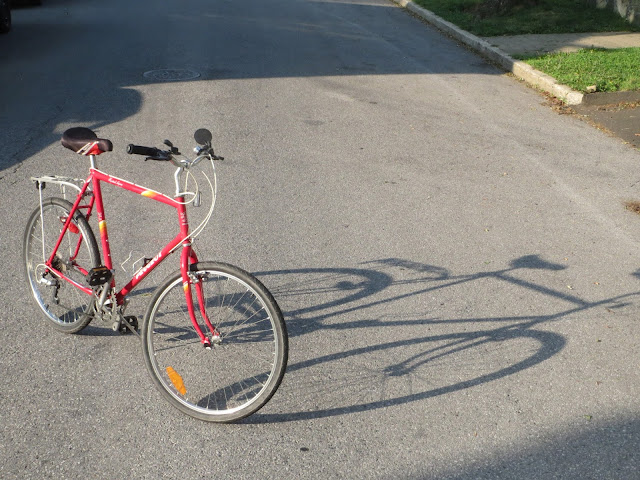 The $20 garage sale bike challenge is long over. The bicycle in question - a red Peugeot - held together for 112 miles-plus of non-recreational riding. It was officially a free bike, since $20 will take me about 112 miles in my car.

Now the original plan was to cut the bike up and add its frame to the raw materials pile of the welding room. That's what happened to the Fuji Espree, the mysterious Raleigh Sports, and a few other bikes that were transformed into the DIYBIKING.COM Signature Coffee Table.

But I just couldn't gaze upon the red Peugeot down the barrel of my Ryobi reciprocating saw. I felt like that farmer in 'Babe' unable to shoot the pig of the same name.

It was a special pig. It was a special bicycle. Even though I had ruled out keeping it (I do not have the storage space I wish I had) I decided it needed a more fitting end. Giving it to a friend or donating it somewhere locally seemed too easy - and besides: the Peugeot didn't get the most amount of love from Connecticut in the first place (recall how the woman at the tag sale offered it for $75 while the man at the tag sale, probably her husband, sneered that it was $20.)

The bike needed to go somewhere to be loved. That meant only one place. 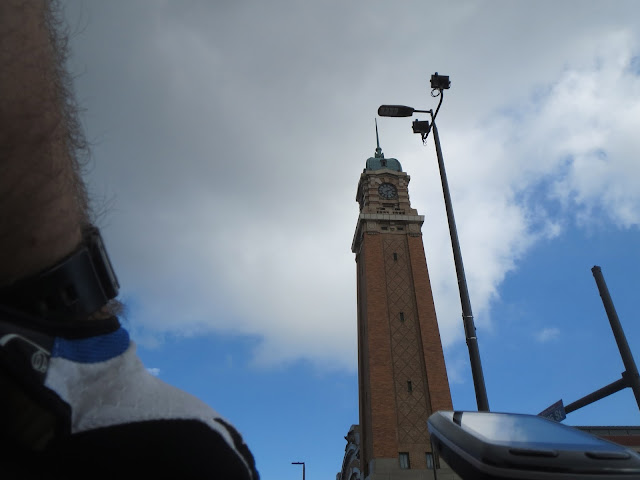 You figure it out: if you catch a mouse with one of those Havahart traps, you don't carefully release it in the middle of a six-lane highway, do you?

Cleveland, this time, was a side trip of a seven-state odyssey as I made a visit to Columbus in late June to see my youngest cousin get married…then days later my sister was celebrating her 40th birthday at Hershey Park (yes: maturity impairment runs in my family)...then Seeing a Baby in Lancaster, and so on, for days. Cleveland was always going to be in the mix but I wasn't sure exactly when until I was too close to the trip to adequately let many people know I was coming.

Rest assured: It's Cleveland. I will be back and promise to give more notice.

My wife and I arrived late at night in the Honda Element, which had the red Peugeot, the Bike Friday New World Tourist and the Mystery of South Norwalk aboard. The next morning I pored over a Positively Cleveland map and selected the red Peugeot for a trip to the Cleveland Zoo - about five miles away - to meet my sister, her husband and my niece. It was my way of getting the red Peugeot acclimated to its new surroundings. ("This is Cleveland. Unlike back home, people ride their bikes a lot here and there's even bike infrastructure!") 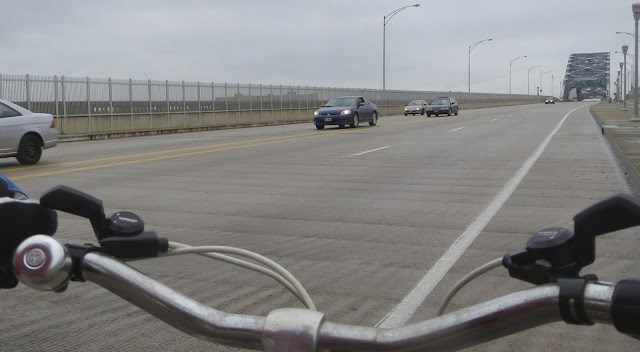 With the better tires I had installed on it and the bell, the Peugeot was in excellent form. I swung by one of the pillars of bike shop excellence - Joy Machines - on the way and made a note on their hours so I could stop by later. 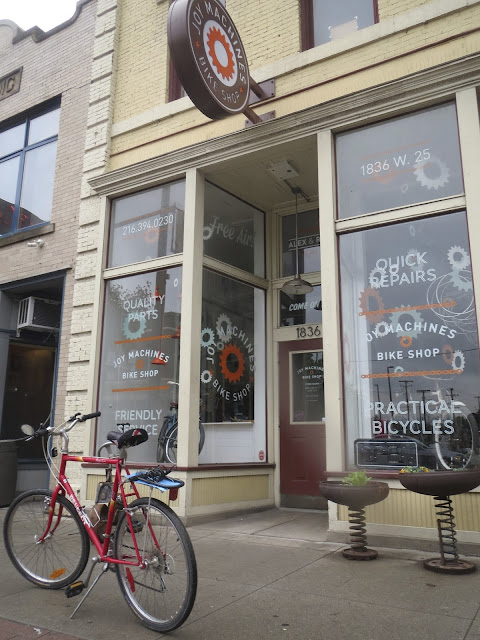 I've never been a zoo person but the animals I saw seemed to have a lot of room to roam around - and the people do as well. If and when you go, give yourself a lot of time to visit as it is a big place. 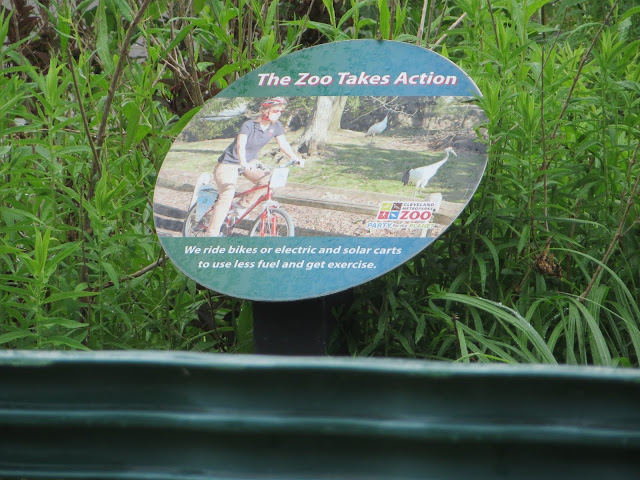 With the bike chained out front, the four of us had a great time wandering about. 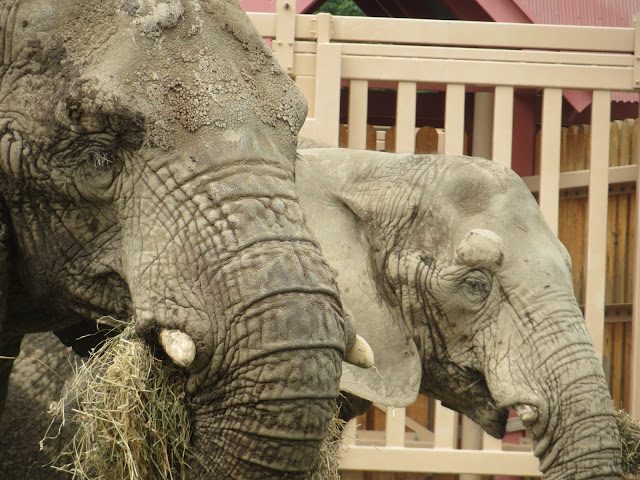 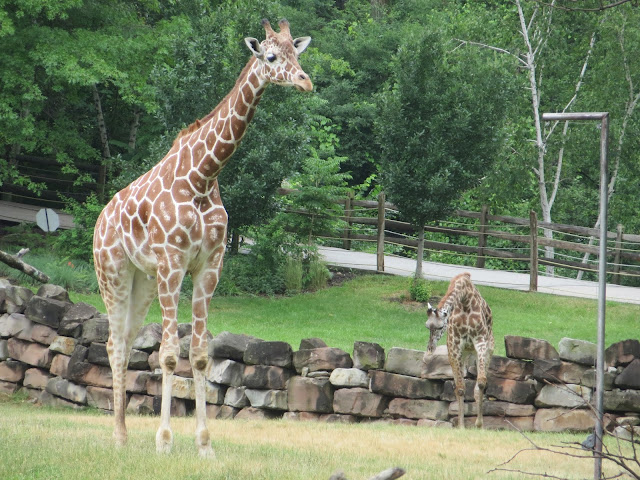 After lunch, I headed back to the Peugeot to get ready for its next trip. Since I still had a little time I stopped by Joy Machines on the way back. Incidentally, you know you are in Cleveland when you are passed on the road by someone riding the following and, as he sees you unable to get your camera out in time, turns around to head back so you can get your shot. Thanks, stranger. 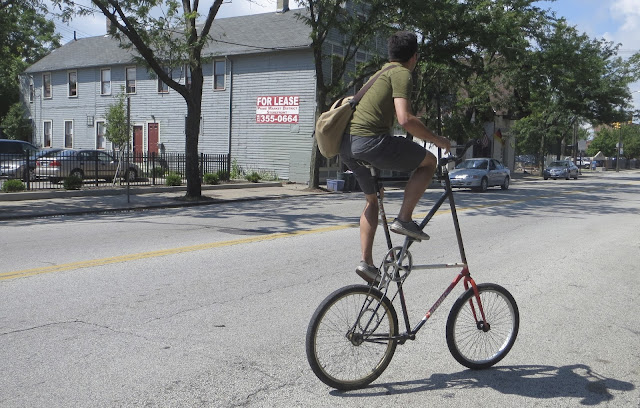 I then went to East 4th Street to visit The Greenhouse Tavern for a cold drink - the place also has significance as it was there my wife, weeks ago when she had visited Cleveland on her own for a business trip, had learned that someone needed a bicycle. 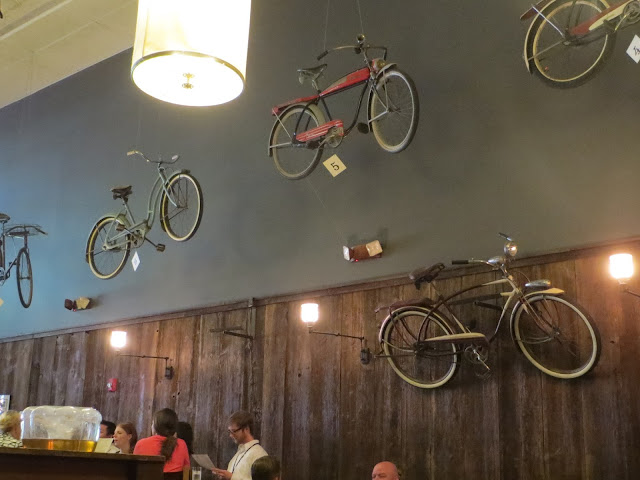 It's also one of my favorite places to eat in Cleveland on general principles - not just due to the decor. The food is borderline astonishing.

While at the Greenhouse Tavern, I realized that I may not be able to meet the person who needed a bicycle before my visit ended, so quickly I hatched a plan.

After a brief rest at the hotel, I removed South Norwalk from my car and mounted the Peugeot to the tow package. 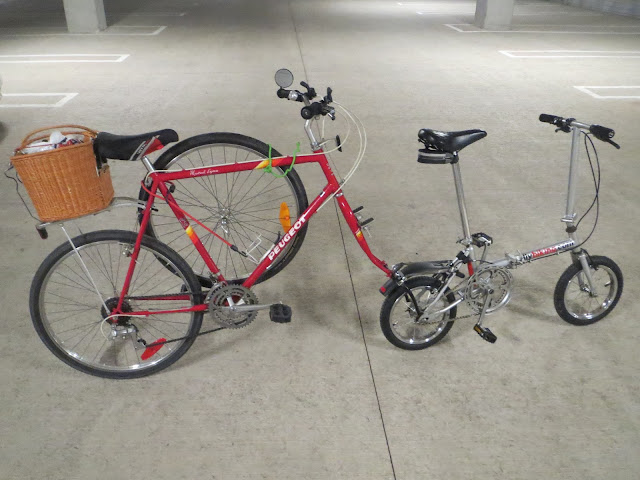 Yes, this configuration was the entire reason South Norwalk made its second trip to Cleveland: because I knew that at some point I was going to tow the Peugeot somewhere…and not bring it back.

I headed off to the Ohio City Bicycle Co-Op. Weeks earlier, when cleaning out my workshop, I had emailed the organization asking if they needed some donations (hence the front basket from a women's bike filled with goodies) and wanted a volunteer for late Thursday afternoon. They said yes to both, so a little before four o'clock I set off.

Cleveland rewarded me with good weather, but the tow package configuration was to be put to the limit on Columbus Road: the bridge that had taken me to Nano Brew and their 'thank-god-I-am-not-a-vegetarian hamburgers' the last time I was in Cleveland was closed for repair and the road itself was under heavy construction. Oh well, I thought: Cleveland's always been a work in progress. 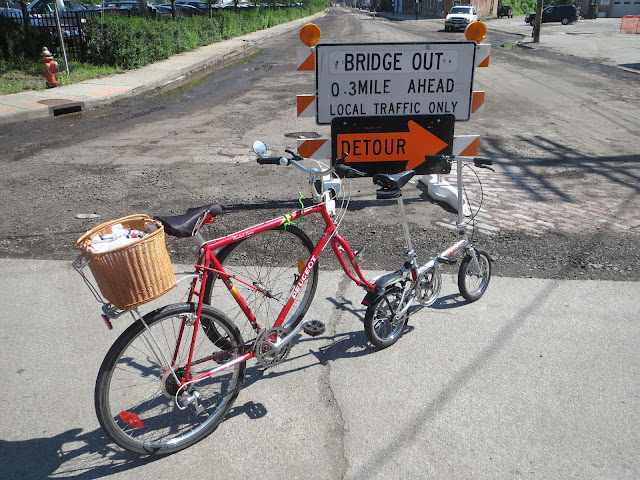 After a slow and bone-jarring ride to the Co-Op, I gave my basket of goodies away and explained my situation: I couldn't cross paths with the person who wanted a bike on this trip, so I proposed this: how about I store the bike at the Ohio City Bicycle Co-Op (in the massive room that looks like the closing shot of Raider's of the Lost Ark) and get a message to the person who wanted a bike to pick it up there…and if that person didn't show or didn't want it, the Co-Op could consider it a donation? 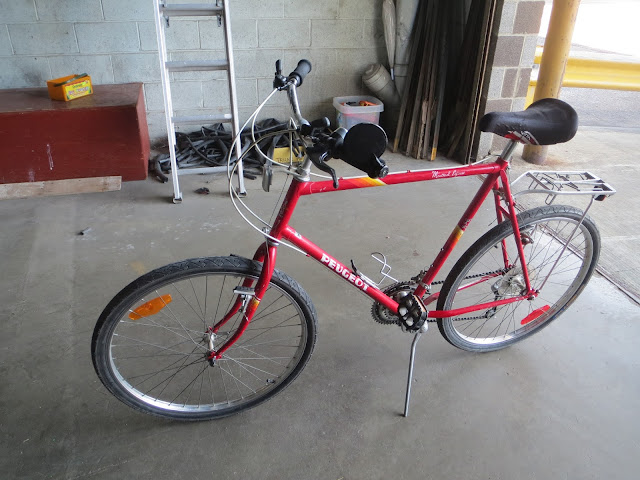 I tenderly hung the bike in the 'layaway' section of the Big Room. That bicycle and I had traveled far, and I was sure that even if the bike didn't end up going to the person for which my wife and I intended, I was sure it would be loved in, and by, the cycling community of Cleveland.

That'll do, Peugeot. That'll do.

I then volunteered a few hours, and If you are in Cleveland for work or for play please volunteer to work on some bikes or anything else they want you to do. It's a great organization and it's just nice to be in a different workshop with great people. 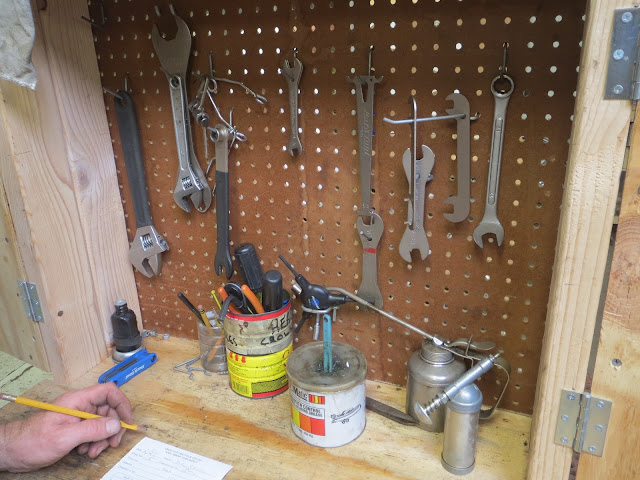 Having to meet my wife for dinner, I said good-bye to the Co-Op and pedaled South Norwalk back to the hotel - and I got there much faster than my earlier trip as I was no longer transporting the Peugeot. I wondered if I'd see that bike again and realized the odds were against it, but I was sure it would enjoy its new home.

The next day, I had just a few hours before heading to Columbus, so I hopped on the Bike Friday and did a bit of a farewell ride through Cleveland. 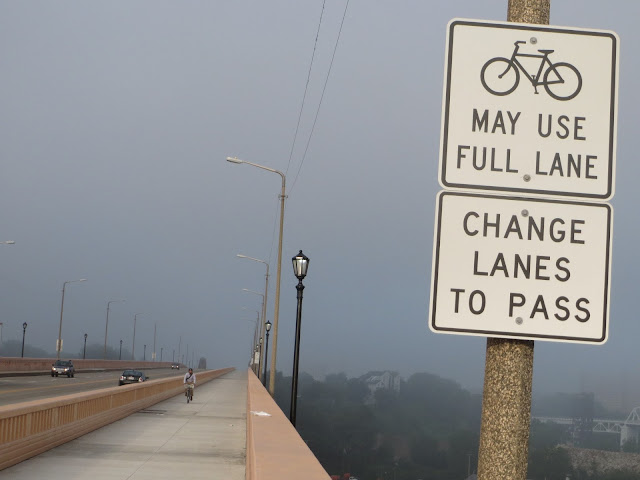 I wasn't sure where I could or should go - but I ended up finding a path to the Ohio & Erie Canal trail. So I followed it and was able to pedal at a quick pace thanks to the smooth pavement and early hour.

Two roads diverged in the wood. And I - I flipped a coin. I knew I'd have fun either direction, so what's the difference? 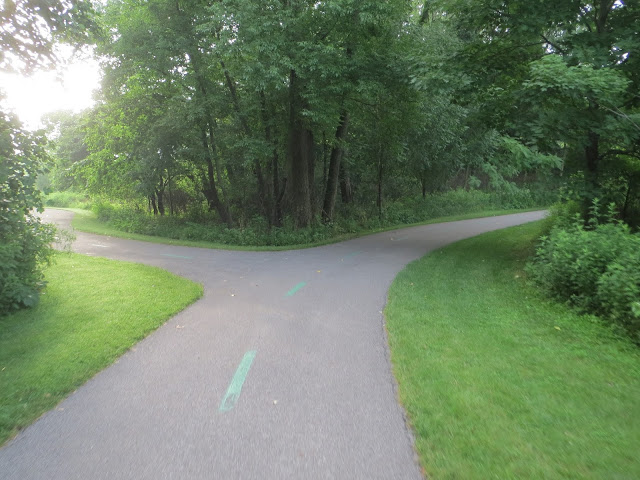 I rode fast and far and enjoyed every second of it - and silently thanked the massive team that must have made all of this possible. 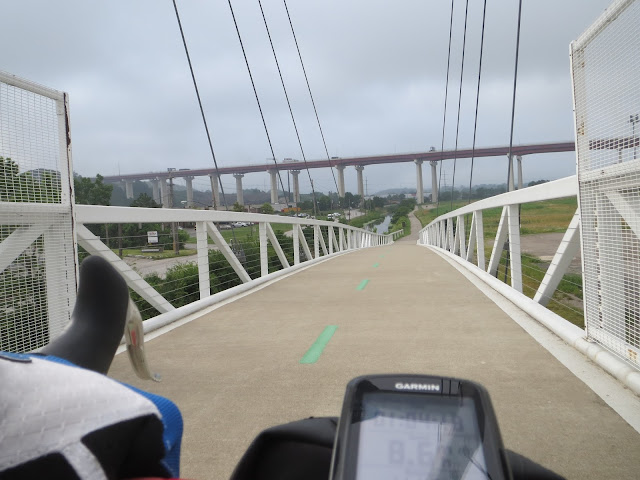 A ways down the trail I stopped at a Yours Truly restaurant that is right along the way - and conveniently located right at the path. 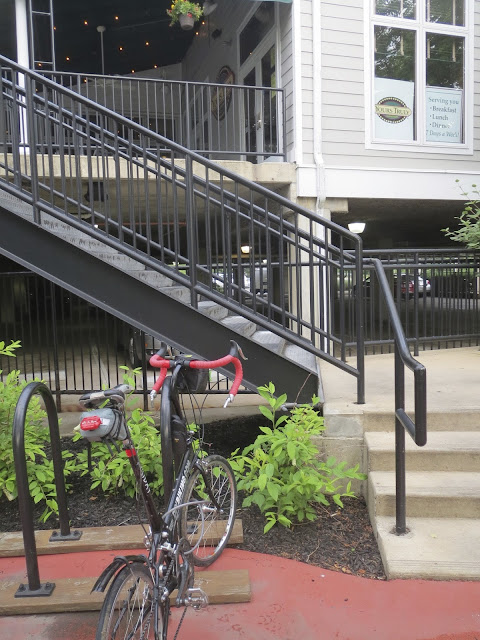 Properly fueled, I headed back to Cleveland, noticing more people who had come out to enjoy the trail. 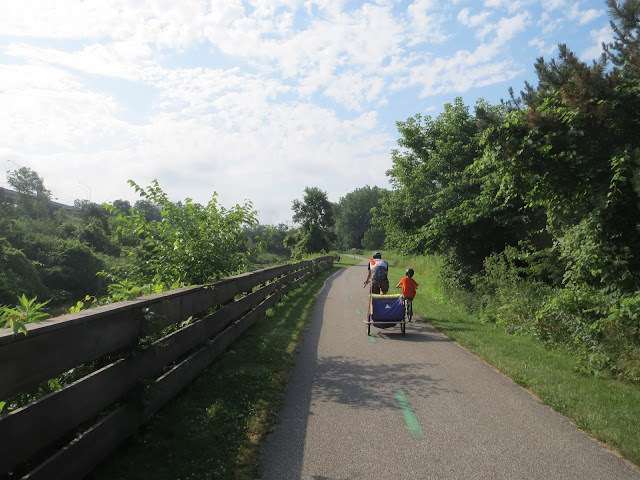 On getting back, I had enough time to swing by Blazing Saddle Cycle and to Fridrich's, where I was able to part with a few dollars and buy an old steel frame I could use for welding. It was a much better frame to sacrifice than the frame from the Peugeot, and thanks to the help of one of Fridrich's friendly employees who provided wire ties, I was able to C-3PO the frame to my back for the rest of the ride. 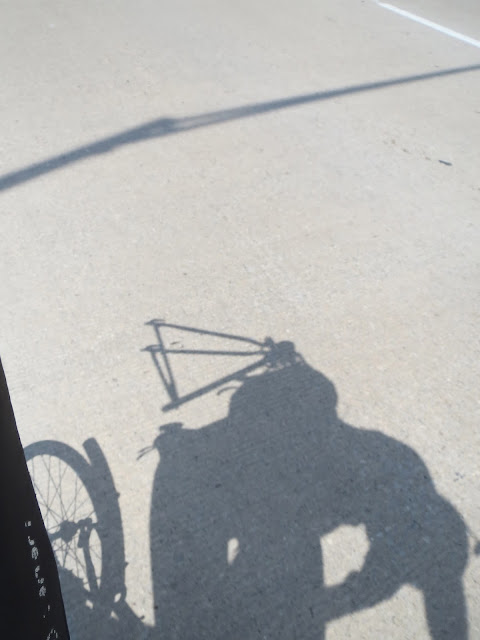 I bought some ground coffee at Erie Island Coffee (was nice to see the barista had remembered me from my visit there seven months earlier) and made another visit to The Greenhouse Tavern before heading back to the hotel to shower, put on nice clothes and hustle over to Columbus for my cousin's rehearsal dinner.

Just like the previous two trips to Cleveland, this one was too short but it was quite satisfying: I was happy to bring the Peugeot to its new home and even bring a frame back with me (the interior of my car is like the island on 'Lost' that way). Also was glad to give some things, not just the bike, but some time to the Ohio City Co-Op. After all, cities only like bikes when its people do. Thanks for reading and thanks for riding. 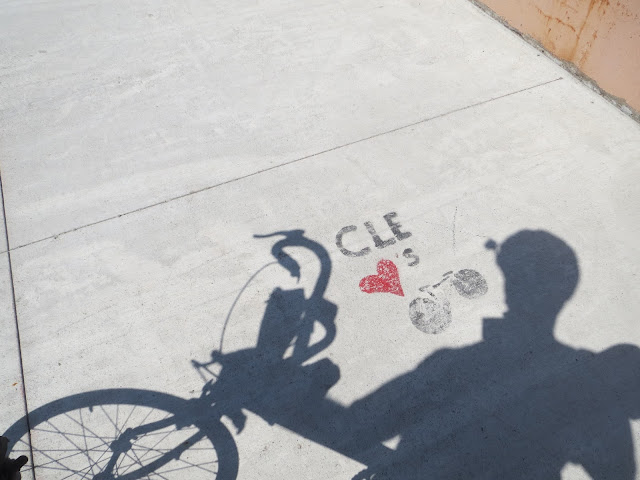