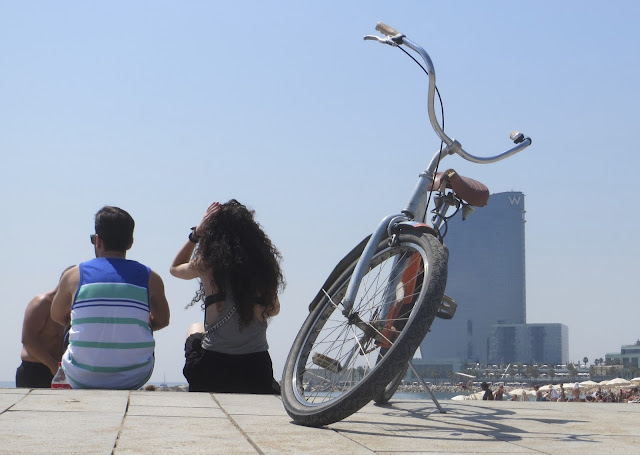 Day two of any three-day cycling trip tends to be the lightest of the three days. I didn't expect to do more than 20 miles and this time I had a targeted destination in mind: the beaches of Barcelona.

I got an especially late start as I began the morning by patching up the tubes I had broken the day before. For some reason, one took multiple applications and the other couldn't be fixed at all. After getting the first tube into what I thought was reasonable shape, I decided I needed more supplies and followed a lead: there was a sports shop called Decathlon, which was a five minute walk from the Meridien. It was, and it was open. 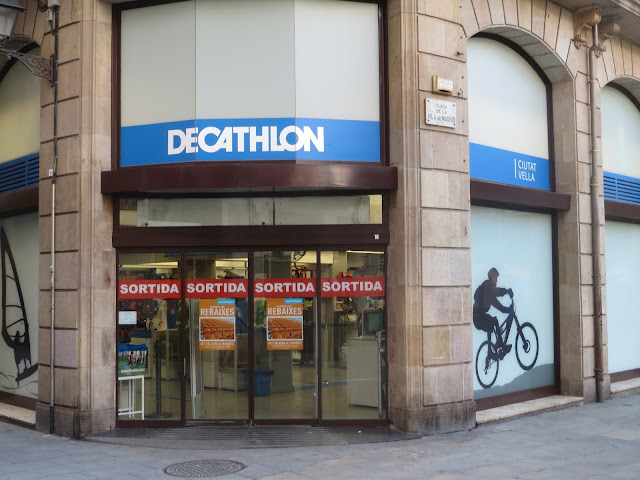 In their bicycle section, I saw more tubes than I had ever seen in my life. But none of them were 20" x 1 1/8" size with Presta valves. All I could manage - and a conversation with an employee confirmed this - was one Kenda tube. The last one. And it was 20" X 1 3/8". I reasoned it was better than nothing and handed over a few Euros to buy it.

Finally, I began my trip by heading down La Rambla, making sure to wave at Marilyn on my way down. 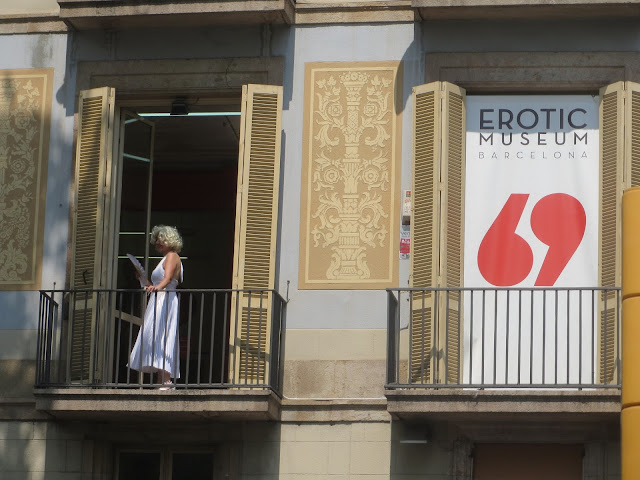 I couldn't see the sea from the hotel, but reasoned I could find it if I kept cycling downhill. That strategy paid off handsomely. 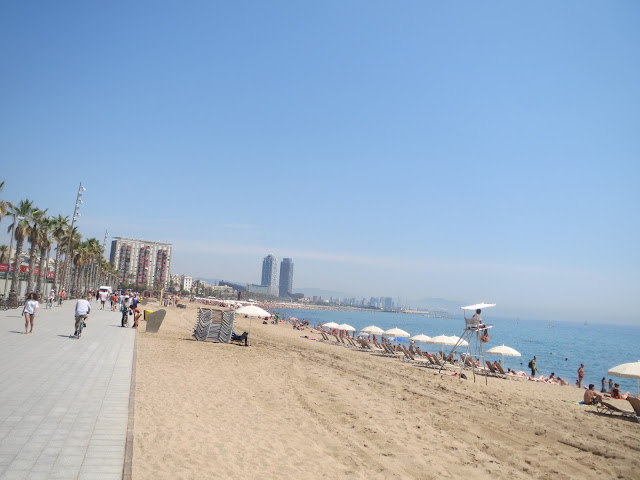 The beaches are quite something, and I quickly discovered that a good number of cyclists not only ride along the beaches but actually sit on the sand as well. It was quite tempting as there were a lot of interesting sailboats to watch. 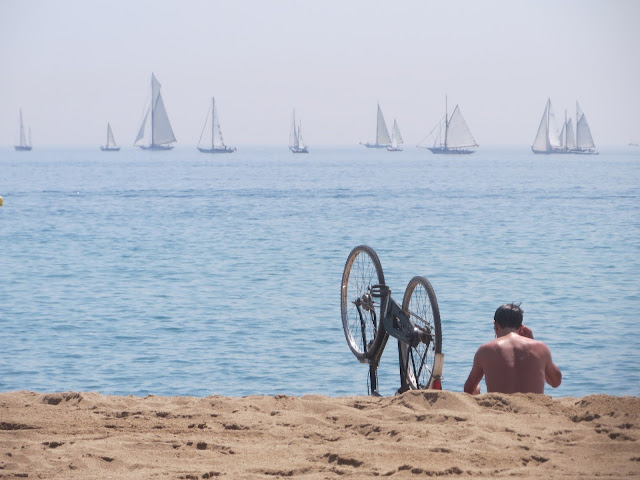 It was around this time I realized it appeared to be a 'clothing optional' beach. Not wanting to lower Barcelona beachfront property values, I kept my cycling attire on.

I continued pedaling along the beach and passed…quite a few nice things to look at, including a sculpture that I assumed had to do with the diving events of the 1992 Olympic Games. 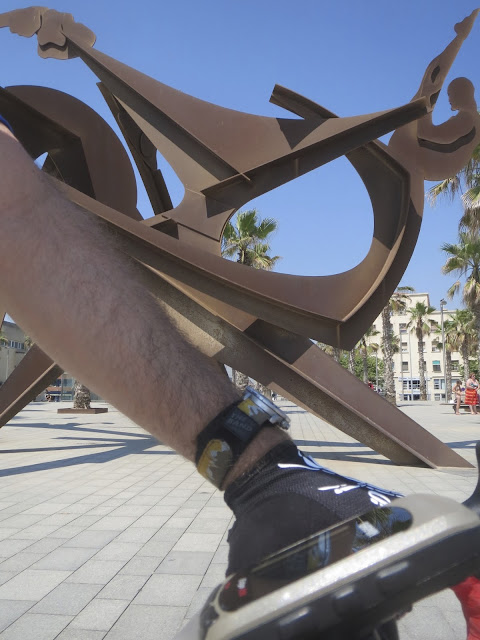 I truly appreciated the message Barcelona was sending with these beaches: the city wants cyclists to be there. The city wants people to meander along. The city also wants people to stop and buy a frozen slushy…even though there is absolutely no consistency whatsoever in how much they cost or how much of a unit of slushy should be or even is. It's a highly unregulated market and you should always avoid buying slushies at all times and all all costs except when you want one. 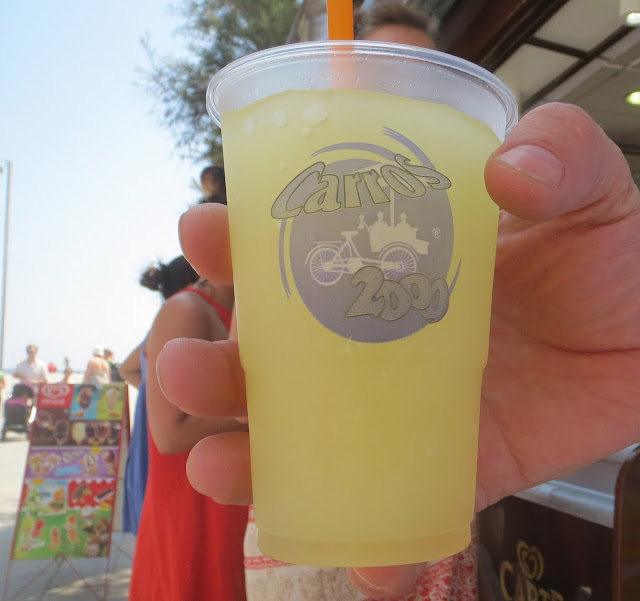 I pedaled leisurely along the path - I was probably the only cyclist within five miles who had drop-style handlebars - which wound its way along the shoreline. 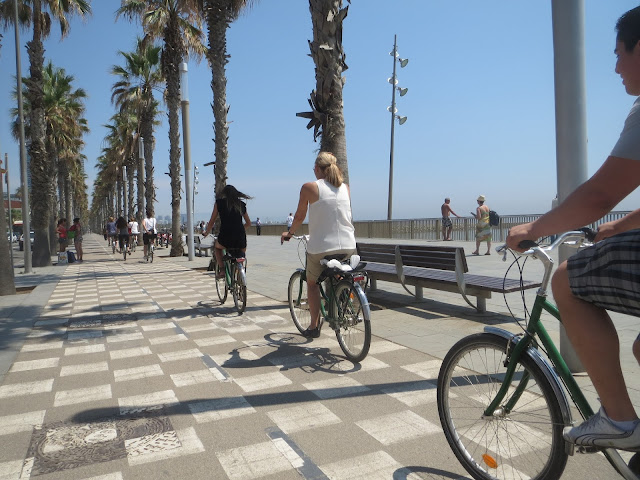 If you do this, you'll be pleased to know that there are a good number of places to eat along the path that are outdoors, which means you can dismount your bike and hold on to it as you order your chorizo sandwich and french fries.  It was at this time I made a promise to myself: have a healthier lunch on day three.

After dining I continued along the shore and the number of tourists and those catering to them thinned out. It still didn't make the beaches less lovely to look at. 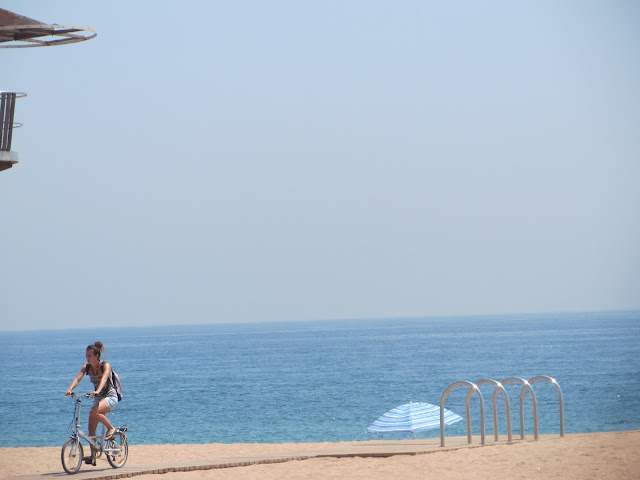 Before long, I had reached the edge of the map and after a few twists and turns came across Museu Blau; a massive museum known for its unique X-Files style UFO shape. 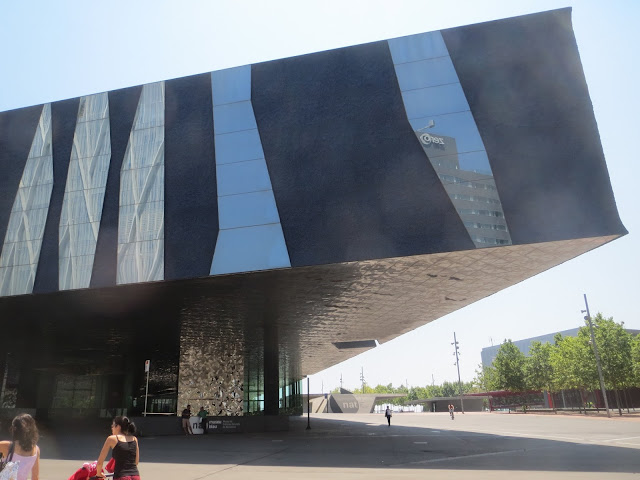 Though my original plan was to stay along the shoreline for the day, I did find myself surprisingly energetic despite the heat and unhealthy lunch (which I was anxious to burn off anyway) and decided I needed to get back on the roads and head for some hills. 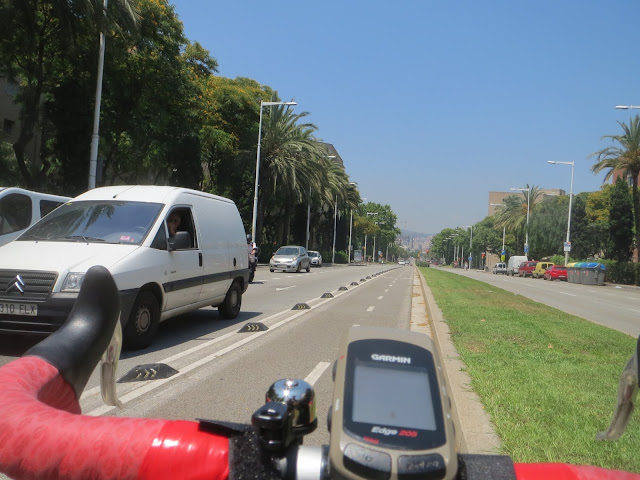 I climbed and climbed and climbed…until finally I was out where the tour buses don't run and wide-eyed Americans with cannon-sized Canons hanging around their neck were virtually nonexistent. Don't get me wrong: I loved being at the beach and I the landmarks and museums look great, but I can do that when I'm older. It's something else entirely just to peacefully pedal through a neighborhood up in the hills. 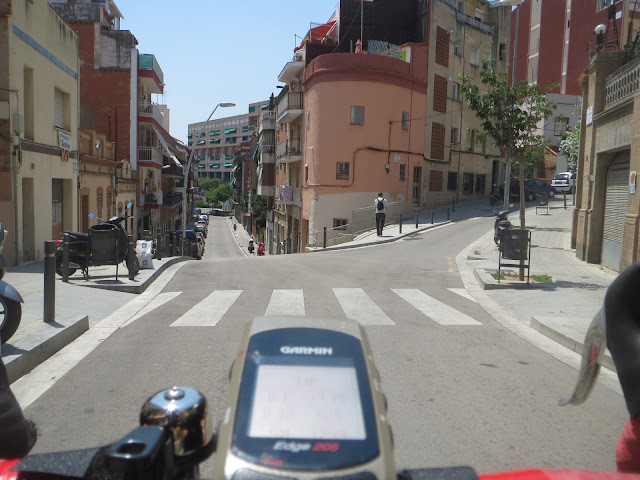 I climbed some more in the direction of Parc Güell - calves protesting at this point - and was rewarded with some impressive views of the city. Additionally, I was able to get a closer look at what looked like a S.E.T.I. tower and some kind of interesting cathedral-like building next to it. It looked as though it was at the highest point of Barcelona. I took a quick picture of it, reasoning I could find out what it was called later. 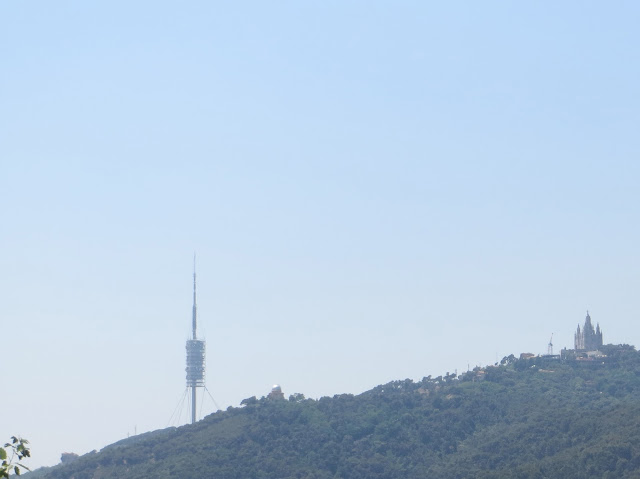 Shortly after I came upon what I assumed was Parc Güell. The friendly British tourist I met up there told me she wasn't sure herself, but we took pictures of one another with each other's cameras anyway. Now just when I assume views of the city couldn't get any nicer, I'm offered a view of the Torre Agbar skyscraper. Yes, it looks like a blimp sticking nose-first out of the ground, but it is even more impressive up close. 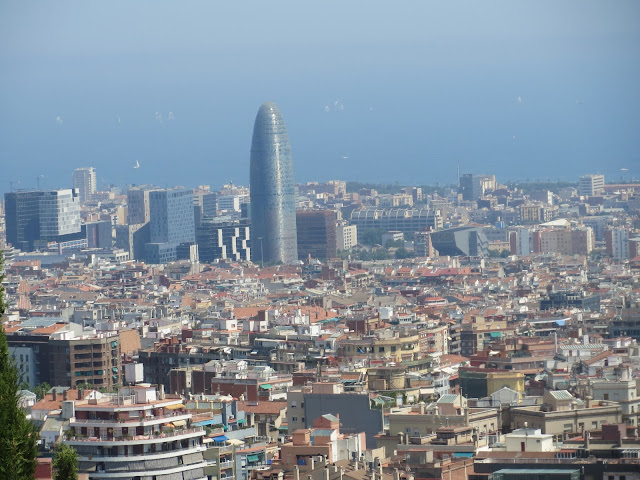 I then decided I was done climbing for the day and should wrap things up, so I headed back toward the center of the city in the general direction of Meridien. But a little thing called gravity changed all that. You see, I had spent most of the time climbing and I somehow stumbled across a road (I unfortunately forgot the name) and was able to ride fast and feel the wind blasting my face. Having spent a day and a half riding in a busy city filled with intersections, cars and stoplights, I had nearly forgot how fantastic a good descent could be. Even stopping at every red light didn't feel like it was slowing me down.

I had gone just over twenty miles at this point so I thought - why not? I'll go another ten.

I wondered if I'd regret pushing myself this far on my second day at the start of the third, but at Castel de Monjuic I was again rewarded with nice views of the port below, and since this day featured even clearer weather than the first, I had a flawless view of the port. 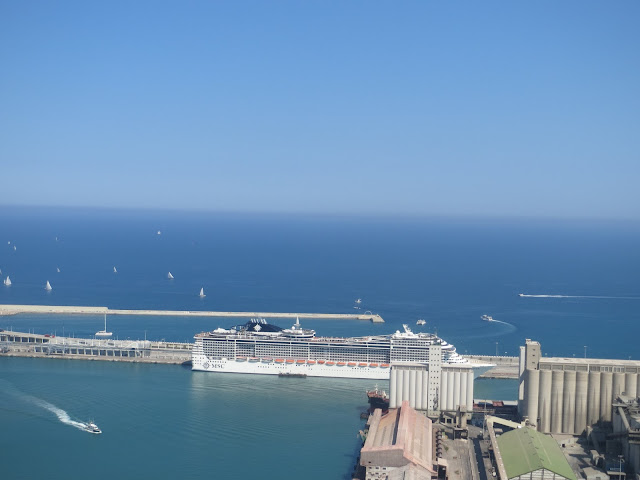 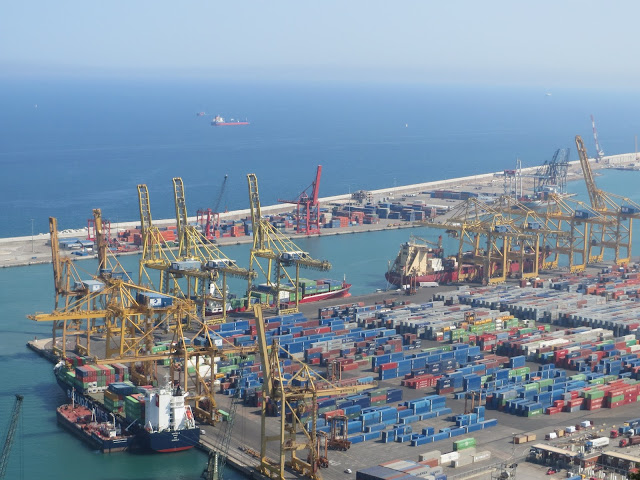 Finally calling it a day, I came back down the same way I came up and enjoyed it immensely. There's a bit of a tricky traffic merge at the very bottom but other than that I quickly decided the Ctra. Miramar switchback was my favorite downhill of the trip.

After another great dinner - this one at Caravelle not far from the hotel - my wife colored in her sketches while I watched TV. I watched a little of MTV's 'Jackass' dubbed in Spanish (I could still follow it alright) and found a sports channel that needed no translation as I thought about how to find that building and S.E.T.I.-looking tower on the hill the next day. I resolved to either find it or ride 40 miles, so, like Santo Domingo, I could make it a 100 mile vacation. The link for part III is right here. Thanks for reading and thanks for riding. 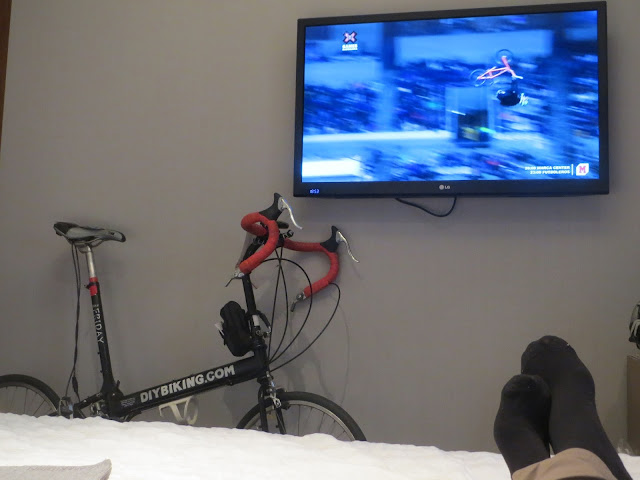