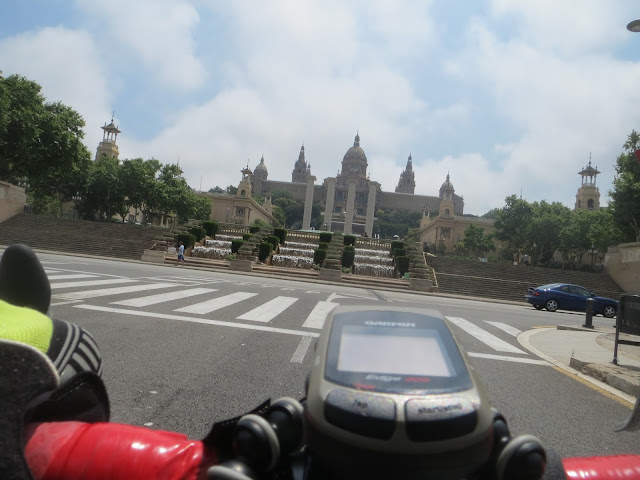 Two years ago, I accompanied my wife to Lisbon, Portugal so she could attend the Urban Sketching Symposium. I rented a bike for three days and saw her…and a passionate pen afficionado or two…for dinner each night. A year later, since the symposium was held in Santo Domingo, Dominican Republic, I spent three days riding my own Bike Friday New World Tourist there. This year, the powers that be decided that the 4th annual event that draws talented pen-and-brush enthusiasts from all over the world would be held in Barcelona, Spain. 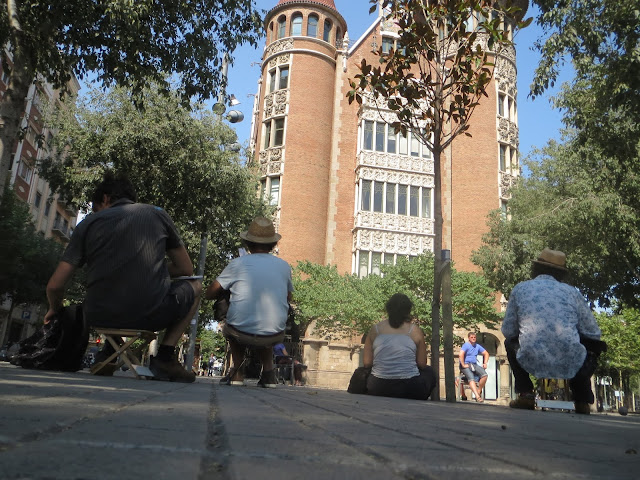 Naturally, I packed my Bike Friday New World Tourist and went along.

To prepare, I looked back at last year's Santo Domingo trip…and was immediately appalled. I was surprised just how close I had come to having a disastrous cycling experience: between the trashed pump, the flat, the heat and biking far off the map, I was lucky not to have been killed or even worse: been forced to give up riding on vacation.

So this time I took extra precautions: I brought two patch kits, two tubes, two sets of tire levers (one metal and one plastic as I've always had trouble getting the tires off the small rims without metal levers), two quick links in case the chain broke. Two bike GPS units. Two cable locks.

Two of everything. I had the Noah's Ark of tool bags. I also had duct tape, some reusable wire ties, a spare tire and a small pair of vice grips. Angus MacGyver would have been proud.

I also applied some wisdom from the Santo Domingo ride: wanting to get a grip on my runaway smoothie spending, I bought a Camelbak that could easily swallow a two-liter bottle of Mello Yello (knowing what a pain in the butt these things are to clean - I only used water).

For this trip we stayed at the Barcelona Meridien, on the famous La Rambla street (now it is recommended that you learn how to say 'Stop thief! He stole my wallet!' in Spanish before frequenting that area, but if you take a few precautions with your personal valuables - such as keeping your stuff in sight at all times and the zippers on your pack closed with reusable wire tires - you'll probably do fine. Also: if you are wearing bike shorts and a bike jersey, you have no pockets to pick).

I've stayed at other Meridien locations before; and I found the Barcelona location was like the others: a very nice hotel with professional and friendly staff that never gave me trouble when I'd wheel the bike through the lobby.  My wife and I stayed there a total of five days - which gave us just enough time to figure out how to make the shower spray water at an ideal speed and temperature. 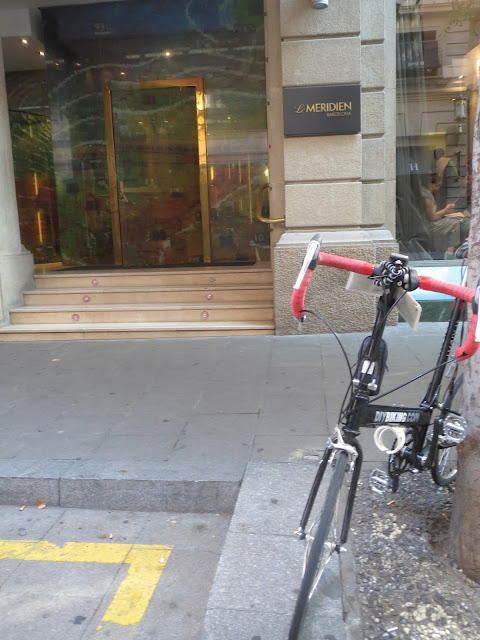 I unpacked the bike the night before my wife's first workshop and assembled it in the room. Thankfully, since I had re-visited the Bike Friday manual, I had packed it properly days earlier and, unlike last year, there was no damage and everything went together well. The next morning, after collecting the customary tourist map from the hotel concierge, I set off.

Now I have to admit I didn't spent nearly as much time researching Barcelona as I should have: I had done a trip to Cleveland/Columbus/Hershey and been committed to a wide variety of Grown-Up Things in the weeks prior to the trip. All I really had was a list of bike shops (and there were many) and had noted that when trying to use Google Map's bicycle directions feature in Barcelona…the little bicycle icon had disappeared.

But within minutes of setting off, I knew I'd be in good company: unlike Santo Domingo, where I saw very few cyclists, Barcelona just feels filled with them. 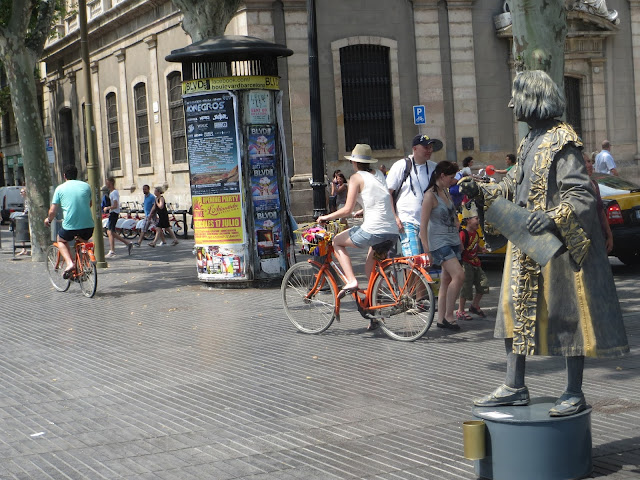 And if you go to Barcelona without a bike, there doesn't seem to be any shortage of places to rent one either on your own or as part of a tour group - neither of which I did. Also exciting is the huge number of folding bikes, which I theorize is due to people coming to Barcelona by yacht (the Brompton riders) or some other type of watercraft (non-Brompton riders).

The city also has a bike share program that it rolled out in 2007 called Bicing.com, and I found docking stations everywhere. 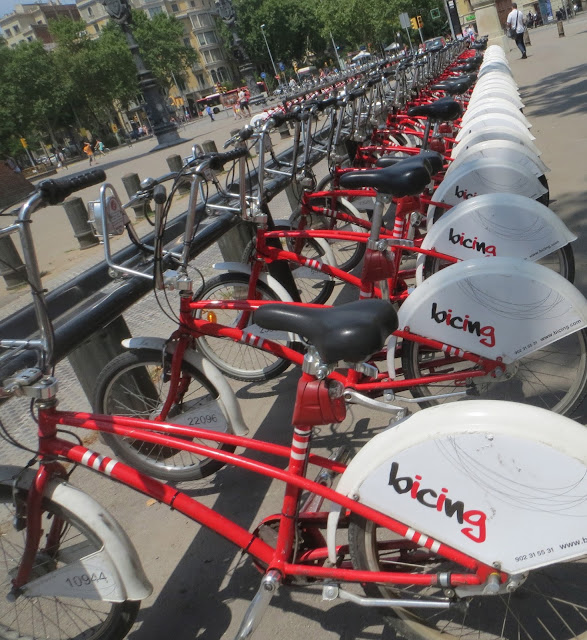 But best of all: Barcelona has bike paths almost everywhere you look. You could spend hours just pedaling aimlessly around the city moving from one lane to another - which was a big part of my strategy on the first day. 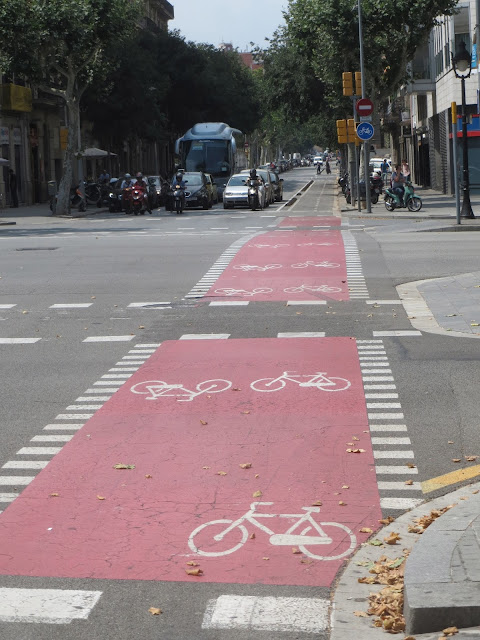 Now like every city that has them, sometimes bike lanes would appear, disappear, or simply be missing entirely which put me on the roads. My personal experience found that motorists in Barcelona drive less angry than in other parts of the world. It's not like in New York where someone will honk their horn at you as though you were planning to be in their path since you let the house that morning. Barcelona drivers will get annoyed when you get in their way and they will honk, but you just get the feeling that they don't take it personally. It's always a good idea though to wear a helmet (not like 99.3% of the people I saw) with a rearview mirror and just follow the rules of the road - and the rules of the bike paths. 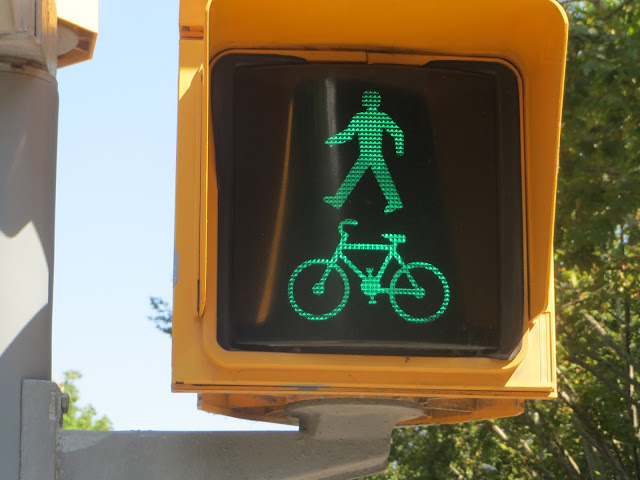 Now there are some pretty big traffic circles you need to be aware of and use extreme caution when riding through, such as the one that contains a beautiful and impressive statue of Christopher Columbus pointing as if to say: "Look! A Bike Friday!" 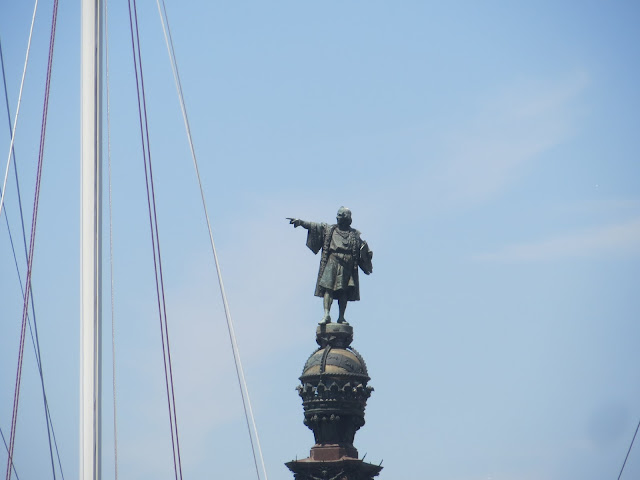 When riding about Barcelona, even aimlessly, you will come across some rather historic buildings. You will even notice these buildings if you are not paying attention to the buildings. A good rule of thumb is that when you're riding in Barcelona and you come across huge groups of tourists pointing their cameras upward, they're looking at something cool, such as the great Gaudi work, Casa Batlló. 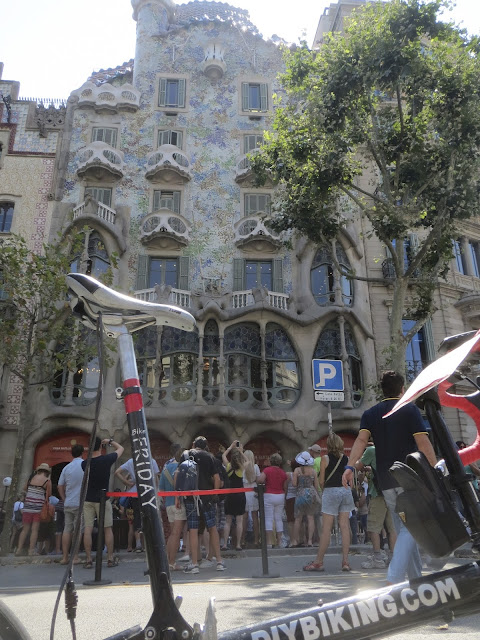 Later I ran into Gaudi masterpiece Sagrada Família. It's been under construction for over a century so I'm surprised Gaudi didn't incorporate construction cranes in the original design. It's still an impressive piece of work. 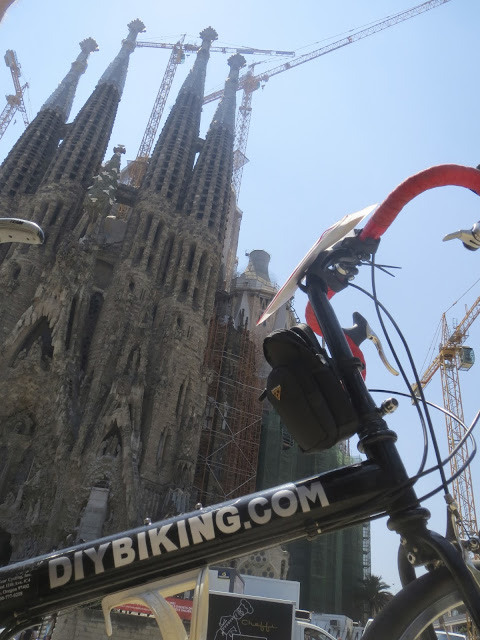 Eventually, I stopped for lunch. Paranoid after learning one of my wife's sketching friends had his bike stolen (twice!) while living in Barcelona, I selected one of the many small eateries that had outdoor seating. Since I can't speak Spanish, a lot of pointing was involved to get me a sandwich. 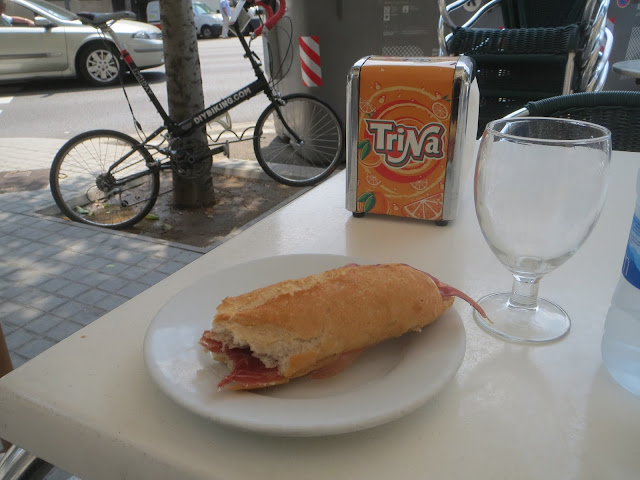 Closer to the beach - which I did not explore on my first day - I decided to head up the hills to visit Castel de Monjuic on the outskirts of the city. This involved pretty much the only big climbs of the day - and they were big. Lucky for me, I found a five-Euro note at the base of Ctra. Miramar, which was a good morale boost before hammering the pedals up, and up, and up (switchback!) and up and up. 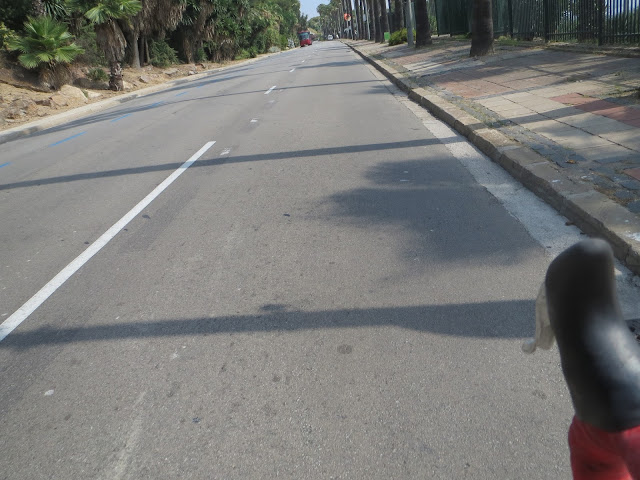 It was during this stretch I really appreciated the Camelbak (each day of the ride, though, I'd have to refill it at least 2/3rds of the way through, which meant I was consuming more than two liters of water daily. If you visit Barcelona in the summer you will probably have to do the same thing unless Camelbak and  B.O.B. Trailers engage in some kind of joint venture).

After passing through a short tunnel near Hotel Miramar, I got my first rewards for doing this optional climb: a nice view of the city through the haze of a July day. 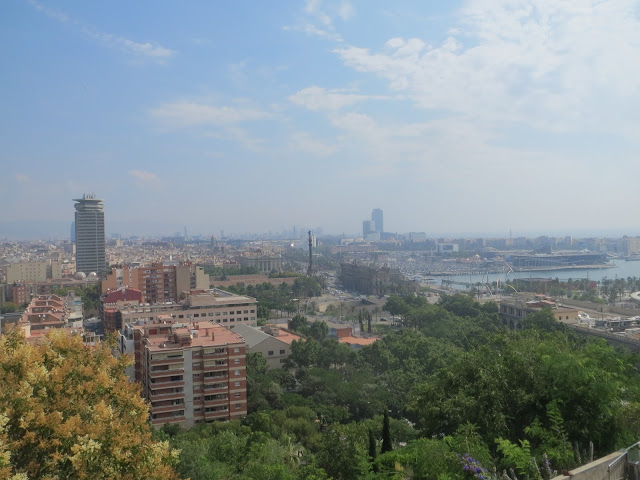 I kept climbing and passed beyond the ski-lift thing that carries tourists to Castel de Monjuic. It was a tough climb, but I was rewarded by my destination which featured even nicer views of the city - especially by the old cannons, which reminded me of Santo Domingo: go to an old city near a port and there's usually going to be cannons involved. 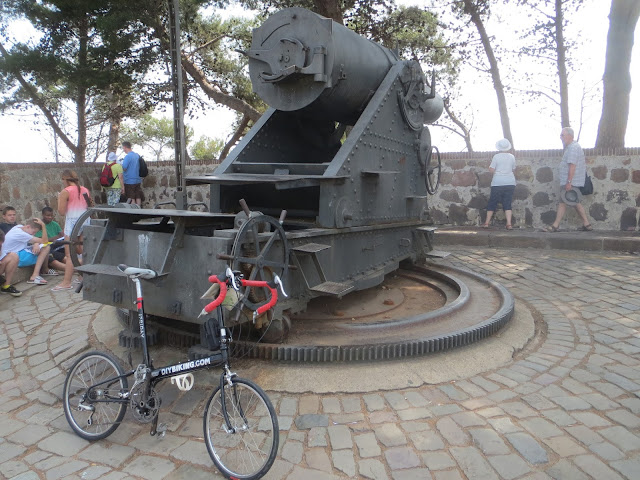 I eventually made my way back toward the roads that led to the Olympic Village (Barcelona had hosted the Games in 1992) and the MNAC museum (part of which is visible on the first photo on this post). And it was here, more than twenty miles into the ride, I noticed the front tire had gone flat. Luckily, Dave Matthews happened to pass by in a car with a bike rack, and he offered me a ride, dinner and front row tickets to his Barcelona show. 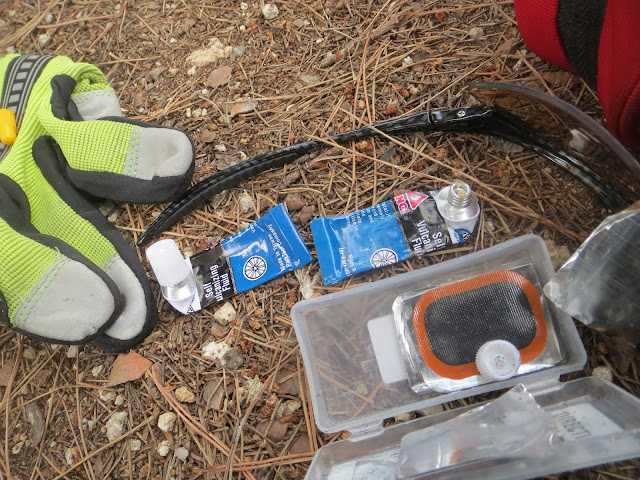 You know, if you take two patch kits and fail to check them first, you have really brought no patch kits.The vulcanizing fluid will disappear as if by magic, which means that you've only managed to bring an ideal storage box for your iPod Shuffle and charger cable. 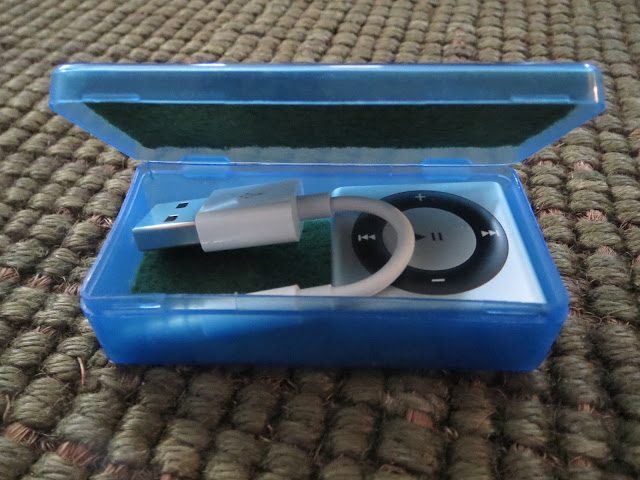 I resolved not to panic. I did, after all, possess two tubes. However, due to my overall clumsiness, I managed to pinch-flat one of them installing the tire.

And just like that: it came down to one tube left. Lucky for me and lucky for you, the reader: I managed to put in on without any further problems. But I was a little nervous about getting another flat, so I decided to ride around until I found a bike shop that could sell me something.

Soon enough, I did: eWheels. 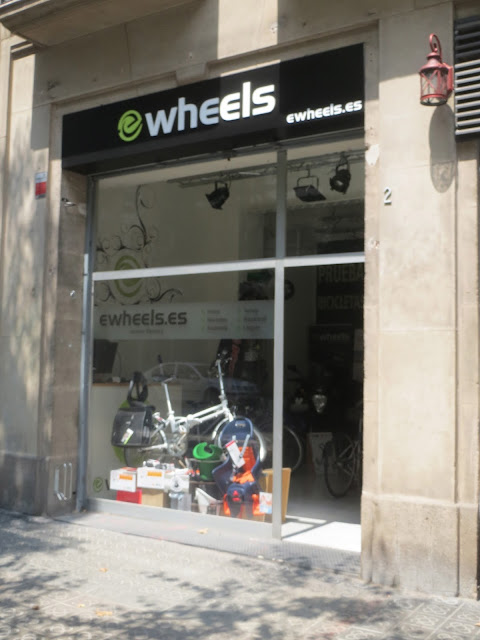 Despite the visually pleasing sight of a lot of unusual folding bikes in the store, I was unable to find any replacement 20"  1 1/8" tubes with Presta valves. But the friendly clerk and myself were able to do business on patch kits and the five Euro note I found earlier discovered its purpose.

With the patches, my confidence returned enough to pedal on, and before I knew it I had reached 30 miles on the odometer on one of the sloppiest and aimless rides I had ever been on. 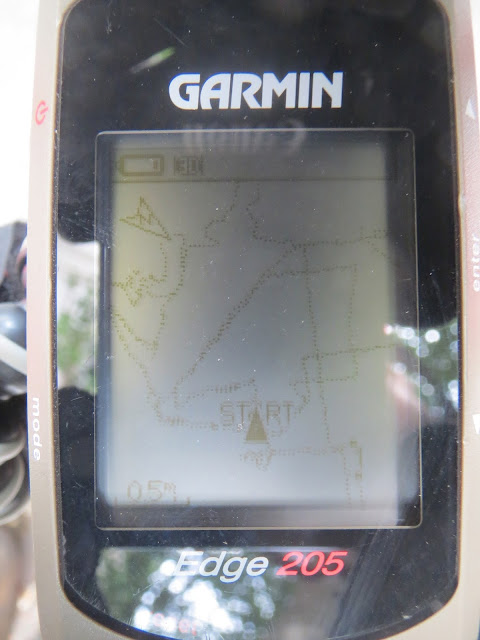 After returning to the hotel, cleaning up and reuniting with my wife we walked off to the restaurant 4Cats - which is where Picasso had his first exhibition - and the famous self-portrait of Roman Casas is printed everywhere (including their paper placemats) and it made me smile. The food was quite good as well. 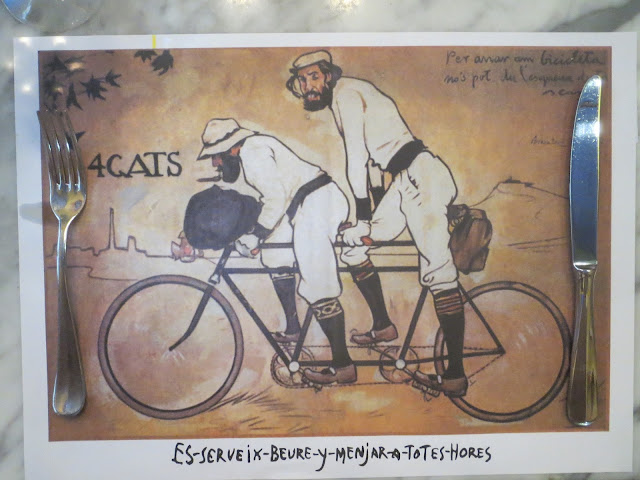 While my wife sketched the bar, I looked at the map and decided that a 30 mile ride was quite nice (all city miles) and I could probably manage at least 20 the next day - which was going to be all about the famous Barcelona beaches. Here is the link for Part II, and you can also check out my wife's first batch of sketches.Thanks for reading and thanks for riding.