Now I know you probably came here looking for the follow up to the DIYBIKING.COM Salute to the Cargo Bike in which I am honoring superior cargo bike makers by building my own.

However, I am forced to admit I am having trouble with the rollout. There are a lot of glitches. Nobody is more upset about this than me. But you coming to this site looking for Part II of the Cargo Bike Salute tells me that there is a lot of interest in cargo bikes. Traffic to this site is above what I expected, and people from all walks of life who have never had a cargo bike before are coming to this site to look for one. And even if they aren't interested, they can always keep the bike they have. Once I have have all the bugs out - and I assure you I will - there will be a cargo bike by the deadline. Thank you for your patience.

So completely unrelated: I biked in Washington, D.C. and parts of Virginia this past weekend. 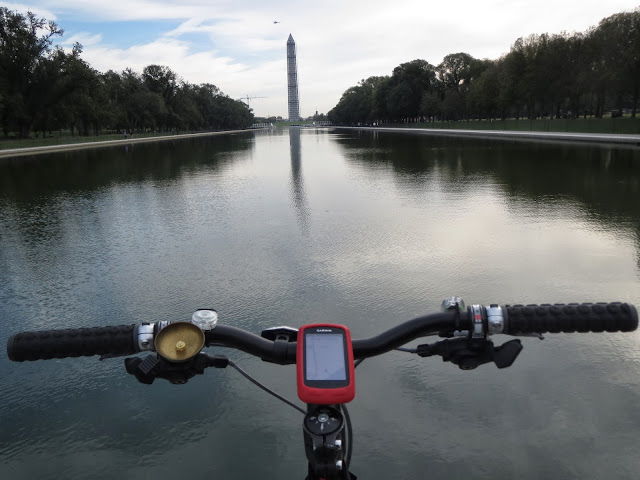 This was a weekend getaway that almost didn't happen. My wife wanted to go to Shenandoah National Park to sketch with a friend but the government shutdown earlier this month made us wonder if we were going to be an Area Man and Area Woman on the news talking about being affected by third-grader-at-recess inspired standoff. But the foreseen conclusion of this brinkmanship came to be, and we drove off to a town called Sperryville, Virginia.

To get there, we drove through Shenandoah National Park. It was $15 to drive a car into the park - or, rather, along Skyline Drive, which is a 105 mile road through some rather breathtaking scenery. 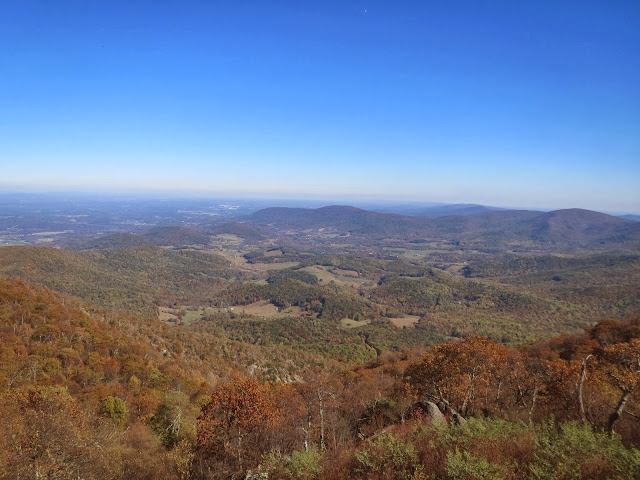 Entering the park on a bike will cost a mere $8; a much better value than a car. However, be warned: if you are out of shape you will know as the word 'hilly' doesn't even apply to this level of elevation changes. Just watching the cyclists on the ascents made me tired but they did look like they were having a lot of fun on the downhills. 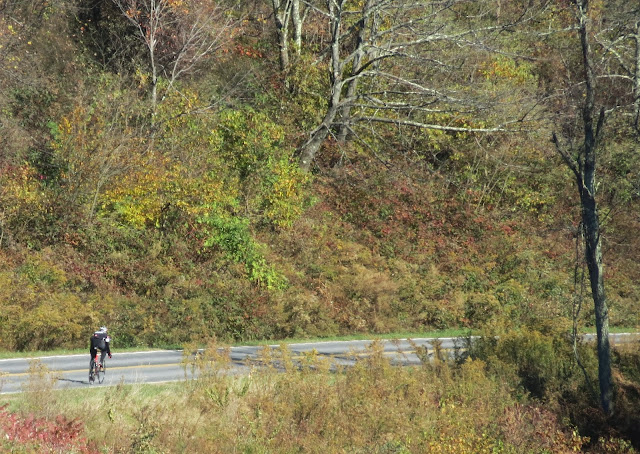 After driving only about a third of Skyline Drive, we stopped in Sperryville after a long descent. We joined my wife's friend at the Thornton River Grill for a good lunch before they headed off to sketch and I jumped on the Dahon Matrix, which had traveled in comfort and style from Stamford on the interior bike rack I built.

It doesn't take long to feel some level of connection with Sperryville.  And it is a town that does leave you with questions, such as: I'm sure it is a lovely table, but how is it an antique if the guy finished building it this afternoon? 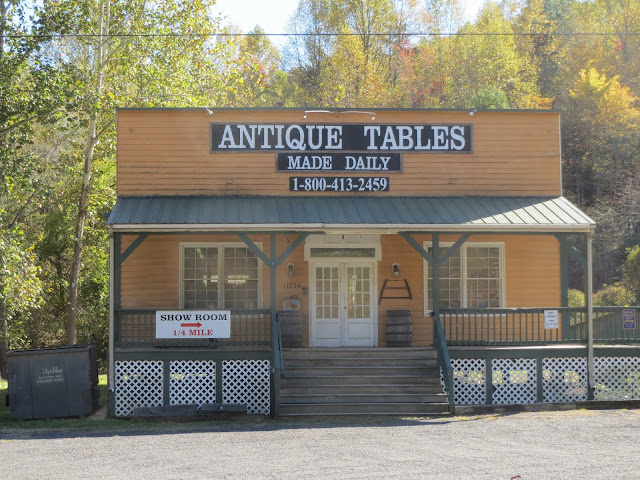 Another question I had was: how much can I climb in an hour of biking? If you have that question lingering in your head as well, this area is the place to go to get a definitive answer…if you attempt to climb Rt. 211 to get back into the park. 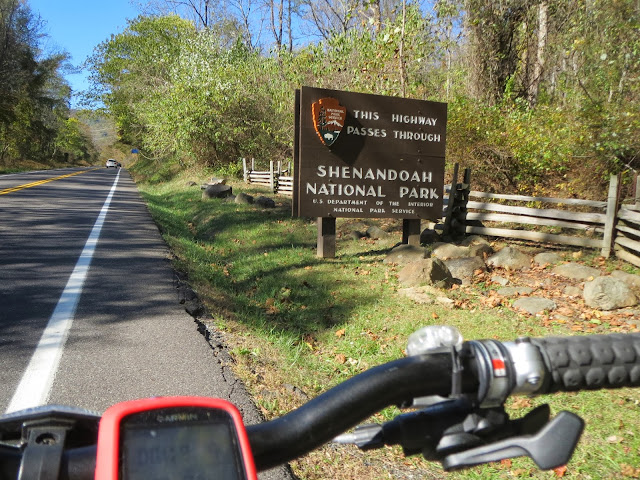 I was initially sorry I had brought the heavy Matrix. The front derailleur only has use of the big and middle chainring (never using the tiny gear on my commute to and from work, which is where the Matrix is usually put through its paces, I was in no rush to fix it).

The scenery was lovely and the cars mostly gave me a wide berth, but I was also keeping an eye on the altimeter feature on my Garmin. Even when stopping to rest and take pictures, I wanted to see if I could climb at least 1,000 feet in an hour. For the longest time there was nothing to do but push the platform pedals as hard as I could and try to keep the bike rolling fast enough to sustain balance. 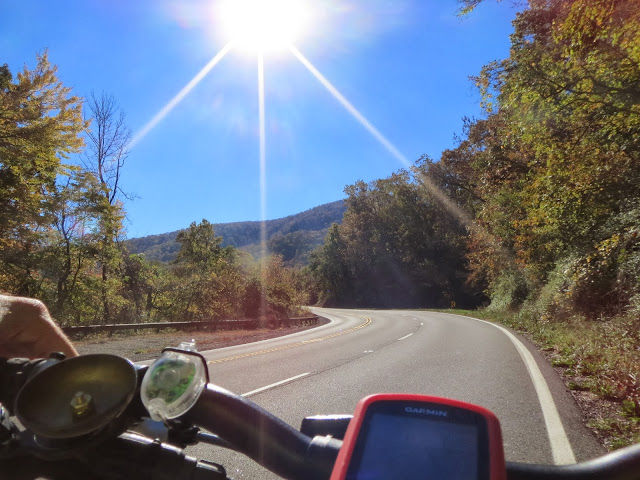 Beautiful, but imagine your thighs being waterboarded and wrapped in razor wire as you view this.

About 800 feet into the climb, something startling happened: the bike chain dropped from the middle ring to the little ring - just on its own. A push of the level brought it back up to the middle ring and if I really put my thumb muscles into it (and wanted to come to an exhausting and uncomfortable stop) I could still put it in the big ring. But the Dahon dropped into the little ring on its own accord. It made me think of the frogs we learned about in 'Jurassic Park' that spontaneous change sex from male to female in a single-sex environment. 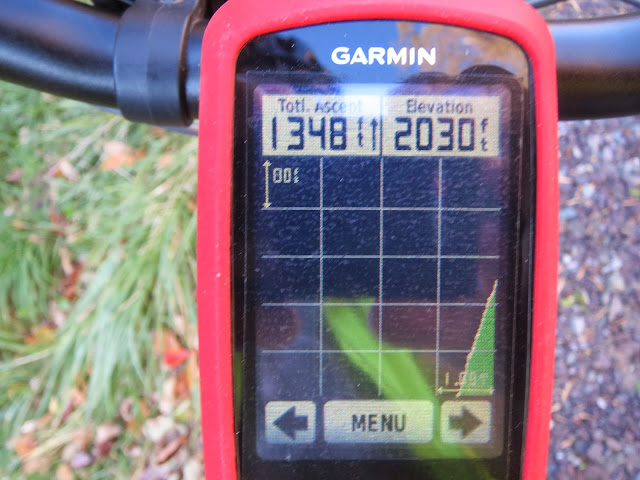 Remaining in the little gear, I pressed on. An hour in the ride, I had pushed past 1,300 feet of climbing in just under six and a half miles - and I still hadn't entered the park. Time trial speed it wasn't, but it was still a feat for me.

Needing to catch up with my wife and her friend I turned the bike around…and was quickly reminded of why hills are our friends: you can go down them again.

I went a good two miles before I even had to pedal at all - and even then it was optional. Having shed a layer already (some nice weather that day) I could actually feel the temperature get a little warmer as I descended, slowing down at each of the switchbacks. Yeah, the hill was worth it - but ask your doctor before you attempt to climb. 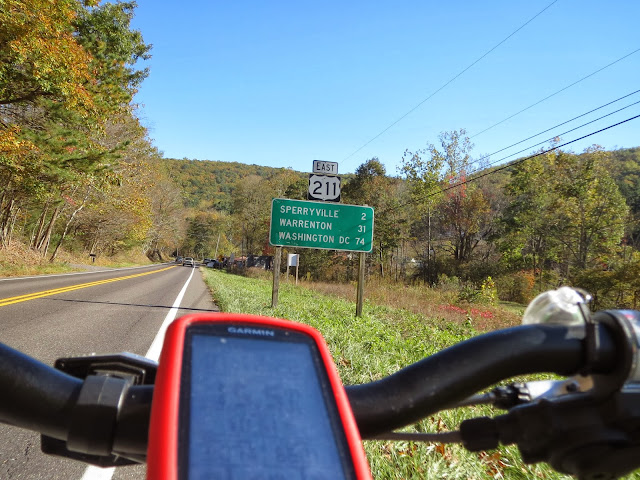 And then, when I was making my final, triumphant run into town, I suddenly smelled coffee roasting, so I slammed on the brakes and went in to buy a pound of freshly roasted beans at Central Coffee Roasters. If I was in a car with the windows rolled up going at speed, I would not have stopped. 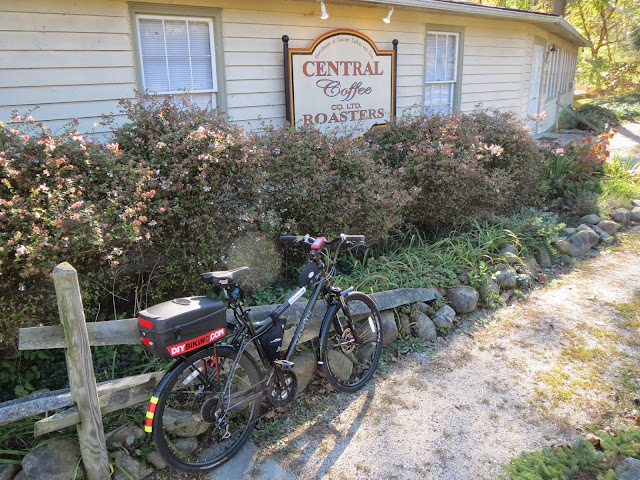 When I returned to town - beans safely in the bike box - the second leg of our trip began: Alexandria, Virginia, which is just outside of Washington D.C. This meant staying in a town that is quite pretty and offers access to some fantastic trail networks. 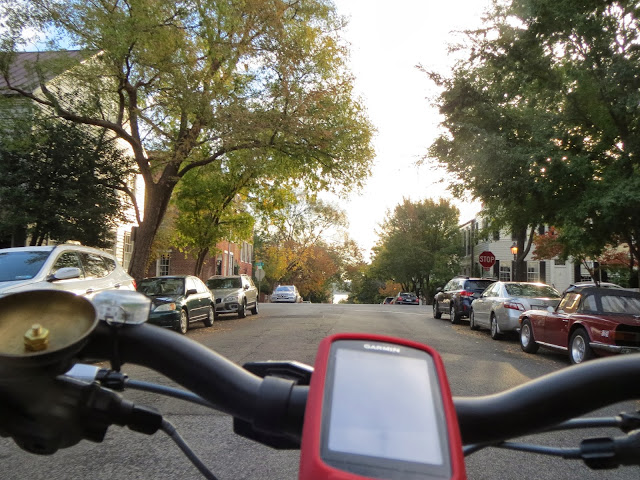 We stayed at the Lorien Hotel in Old Town Alexandria. What makes this hotel interesting is they actually offer bikes to the guests - beach cruisers, by the look of them - on a first come, first serve basis. It's a nice thing to do and I hope more hotels not only get involved, but have the good sense to put the name of their hotel in big letters on the downtube.

Now if you're staying in Alexandria and you want to ride your bike somewhere - say, to Washington D.C. - your first order of business is to find the Mt. Vernon Trail. Do this by heading toward the river and pedal as close to it as you can with the water on your right side. You'll eventually find the trailhead. 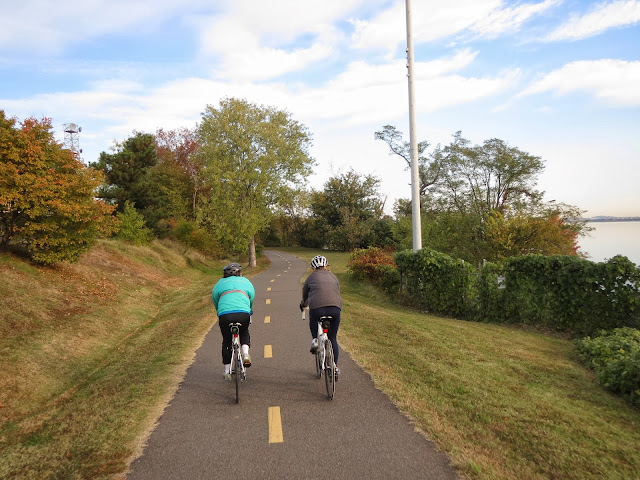 I do enjoy calling Stamford home, but my wife and I decided that if we were ever to live in the D.C. area, we'd like to live in Alexandria. The town in nice and, like Annapolis, provides access to the Old Bay seasoned Utz 'Crab Chip' potato chips. Not only that, but the Mt. Vernon Trail connects to the airport and does offer some nice views of the city as you approach. 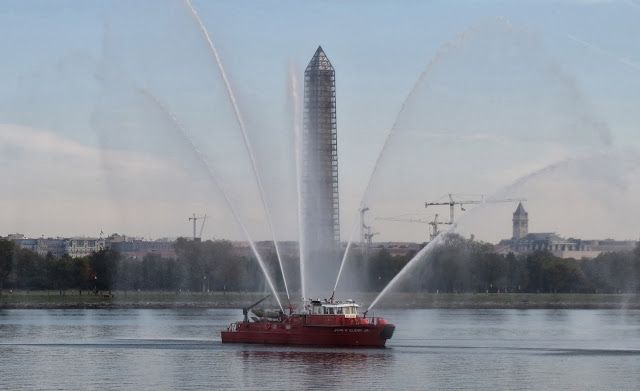 The bridge that leads straight to the Lincoln Memorial that I've used in the past to get to the city was, this day, closed to cars. I did not know why that was so, but I did know I was going to enjoy it. 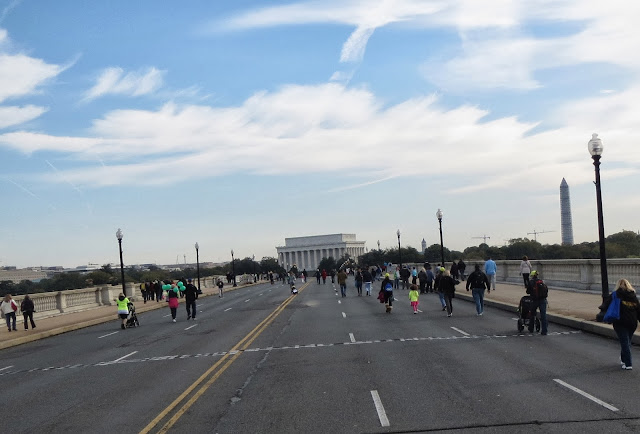 When I got to the other side, I found that there was a 10K taking place, which made me think of my friend in California who was doing her first 10K the same weekend (she's the same friend who I mailed the cookies to last year when I met Stacey, and she offered me the Exhale Spa gift certificate she received doing her run. I declined - telling her she should come visit Stamford and use the certificate herself). 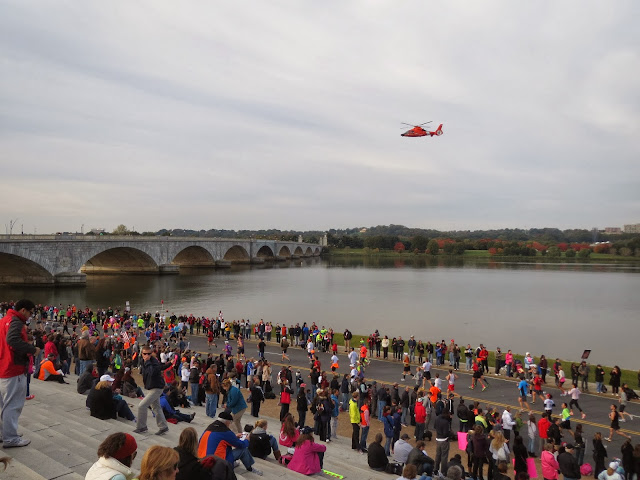 When turning toward the National Mall, I immediately remembered that Washington D.C. - for all of the dysfunction and silliness that comes with that brand - has a bike share program called Capital Bikeshare.  On this day a lot of people were enjoying it. Are you paying attention, U.S. cities that don't have this? 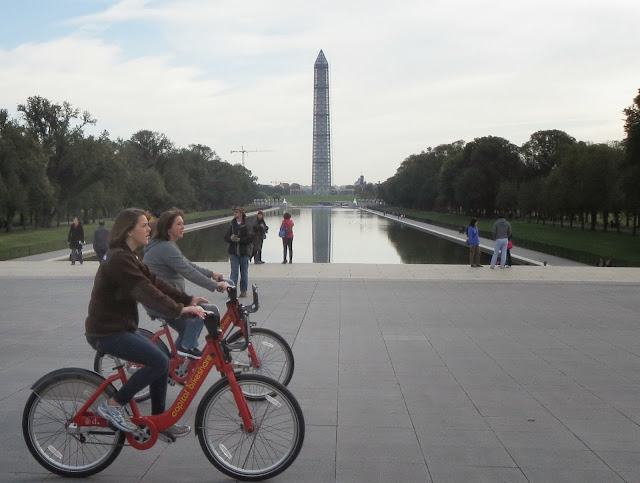 Being mindful of the traffic - both automotive and pedestrian - I rode past the memorials and museums to the U.S. Capitol. I thought it would be great to somehow get all 535 representatives on bikes right in front of the building. It would be like herding cats while wearing a dog costume, but it would be the photo op to end all photo ops. 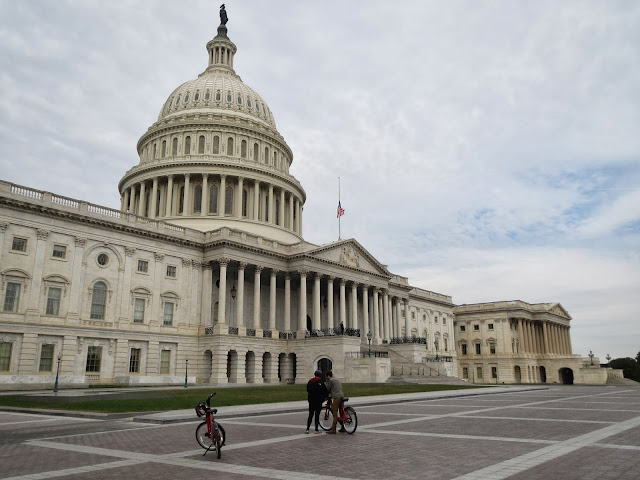 Because of all of the road closures, I can't tell you for the life of me how I got back to Alexandria. All I know is I crossed the Potomac a different way than how I got there (on another bridge that was closed to automobile traffic that day) and reunited with the Mt. Vernon Trail after running the Dahon down a grassy hill near the bridge. As a matter of fact, I don't think I've returned the Alexandria quite the same way each time I've done this, so if you ever try it you will probably do fine too.

After checking out of the Lorian, my wife and I headed to Del Ray - a neighborhood in Alexandria that we did not spend enough time in. We were only there to eat lunch before having some amazing custard at The Dairy Godmother. If you haven't strolled down the street in Del Ray on a sunny day holding a cake cone in your hand, you should do so immediately. Lick the ice cream slowly. Not so slowly it looks perverted, but slowly enough so you enjoy the moment. 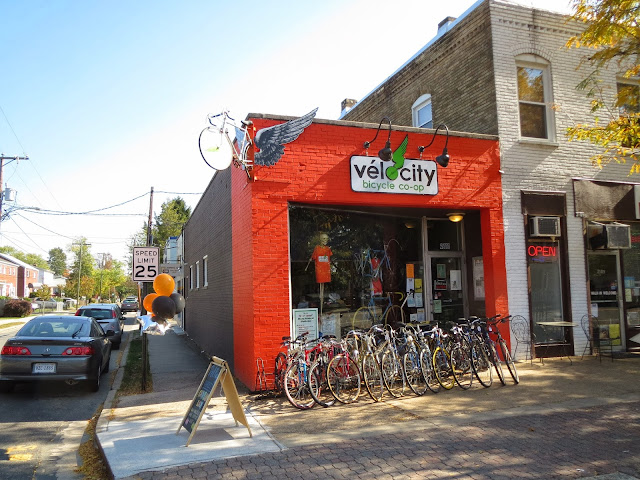 I also came across Velocity Bicycle Co-Op, which we unfortunately didn't have time to check out properly. From the looks of it, it appears somewhat similar to the Ohio City Bicycle Co-Op in Cleveland, so I will have to take a more thorough look on my next trip. If you haven't already, I hope you get to take your first trip to that part of the country soon, and in the meantime: if you're in Stamford this coming weekend, be sure to take part in Bike Stamford II, which is November 3rd at 3:00pm at Mill River Park. Between now and then I'll be working on cargo bike glitches. Thanks for reading and thanks for riding.