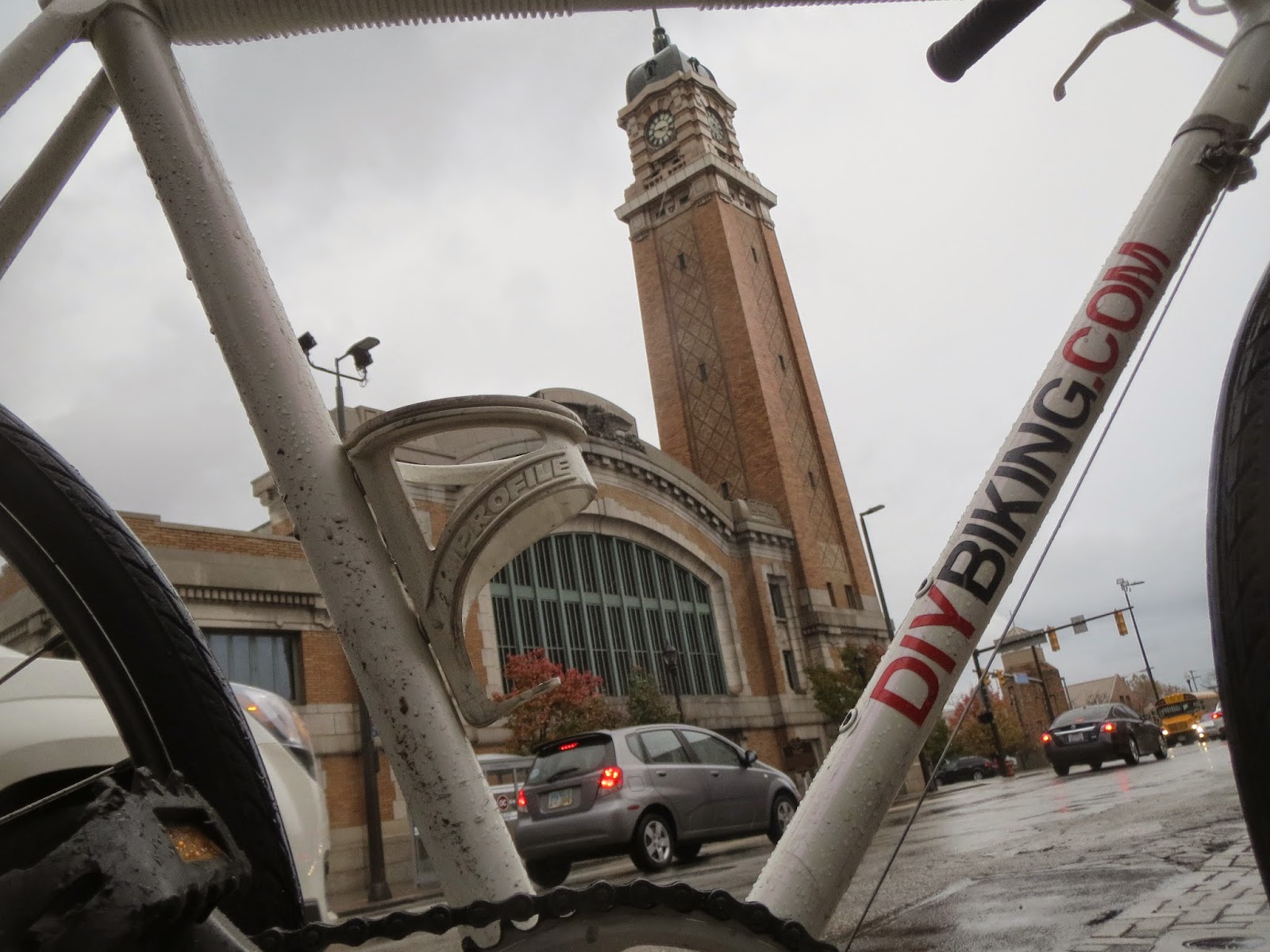 So in the middle of November another mind-numbingly dull drive through Pennsylvania got me to Cleveland. The first thing I wanted to do was gather research about bike parking (more on that in another post).

The second thing I wanted to do was drop off some of my artwork at the Ohio City Bicycle Co-Op for their Winter Expo. 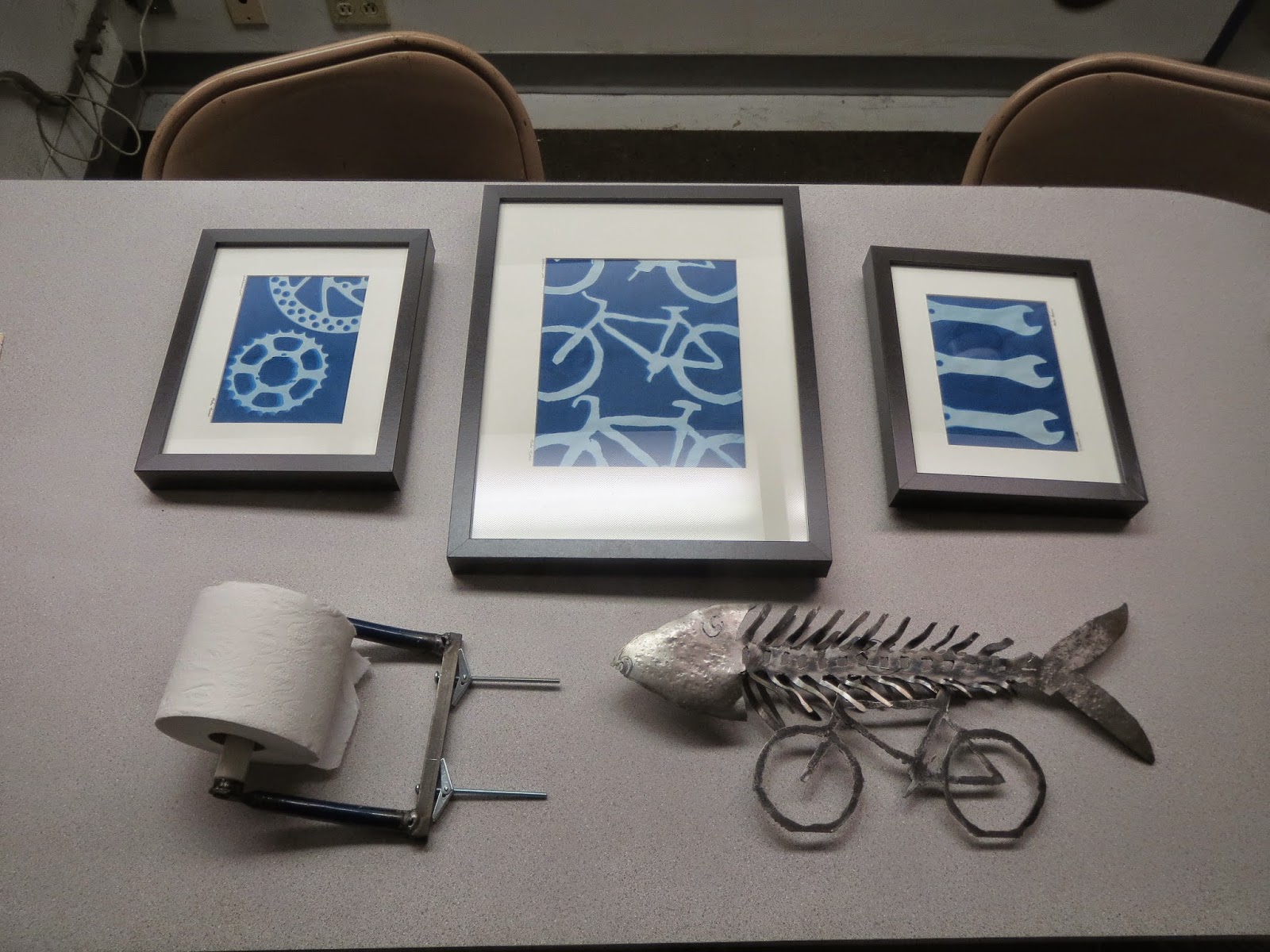 Some of you will recognize the welded metal fish from my solo art show at Lorca a few months back (incidentally: someone has stolen the narwhal off the shelf from Lorca, so B.O.L.O. Details are sketchy but the miscreant left the penguin and took the narwhal. If you’re reading this and you have the narwhal, you must bring it back. Right now, I imagine anyone who lives in a ten-mile radius of Lorca is laughing hysterically while the rest of you are befuddled, so I will move on. I was thinking about winter in general and the Ohio City Bicycle Co-Op’s Winter Expo in particular a few weeks ago when I biked by this tree in Shippan Point in Stamford. It looked pretty, but since I was in a foul mood at the time I made a point to mention the very same tree would look like a set piece from Cormac McCarthy’s The Road in a couple of weeks. 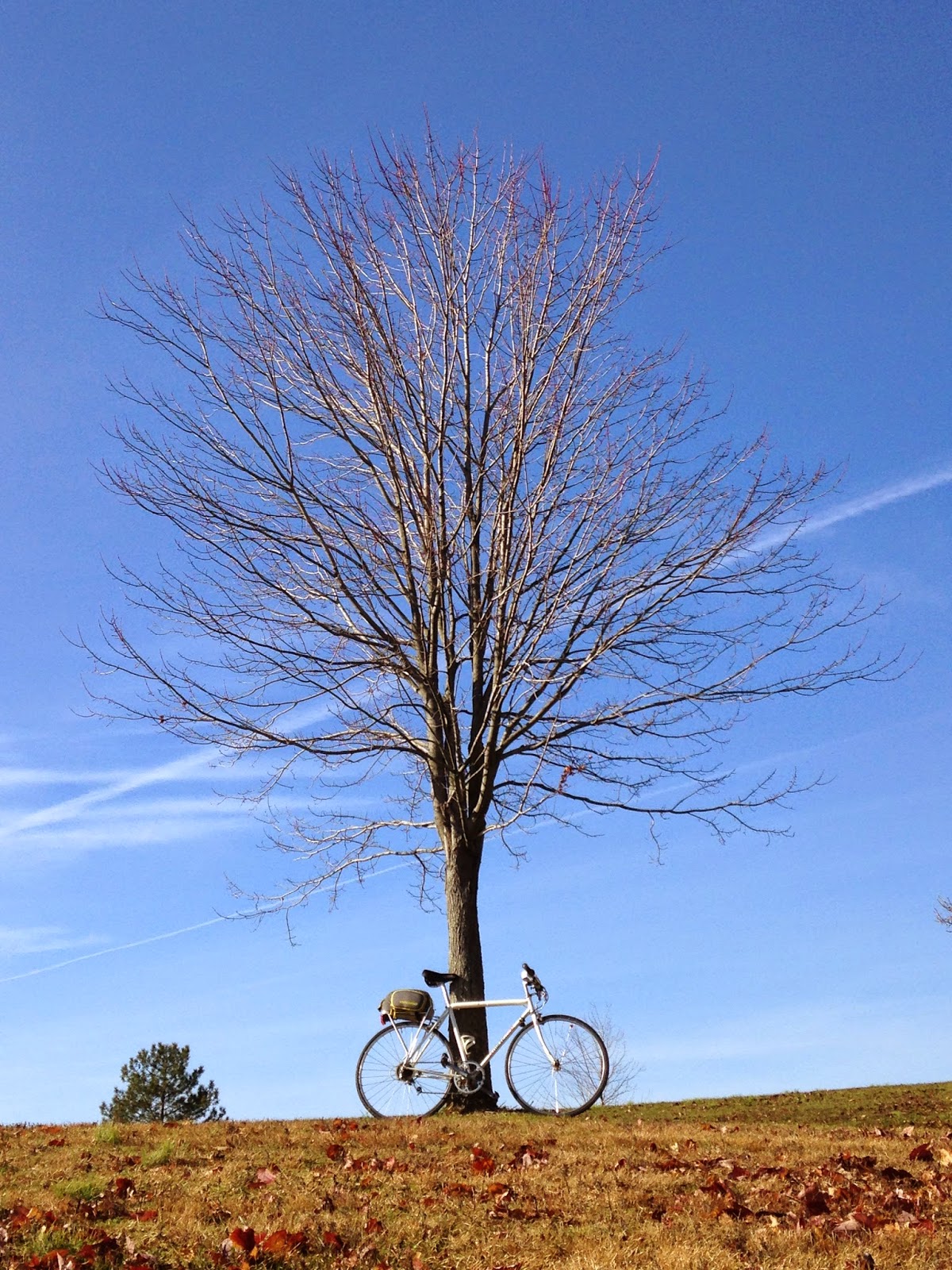 See? My story checks out.

Now a couple of days after I took that photo, I saw other leading signs of winter: three sets of those ridiculous car antlers. Trees on the roofs of cars (and a great video from Bike Friday showing a tree on the back of their new - and intriguing - cargo bike). And finally, on this morning’s ride to Darien, I had to wear this. 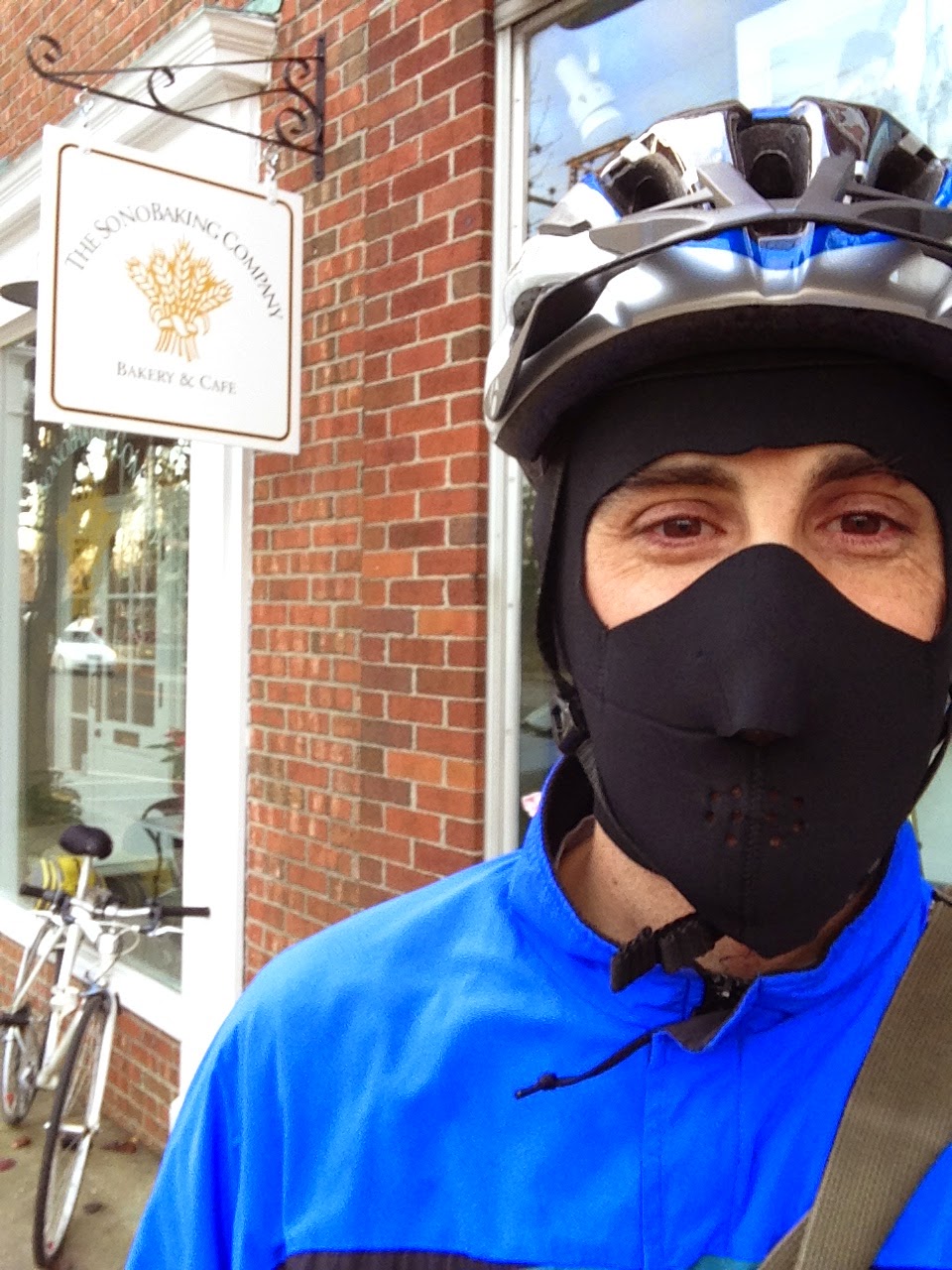 This is a serious candidate for the photo of me that will go on the back jacket of my first book on cycling. The neoprene mask isn’t attractive, but it keeps me warm. I recommend it for any bike trip when it is under 32 degrees - just remember to take it off before walking into a bank.

With the trappings of winter on many of us - I already have my winter bike at the ready - it is good to remember that, as cyclists, there is still much we can do to celebrate the season.

I do wish I could go - but my Cleveland trip was when it was, and I am spending tonight in Stamford while the expo goes on (it starts at 6pm and goes on till 10.

I will be there in spirit with my works. One of which, as you saw, is this. 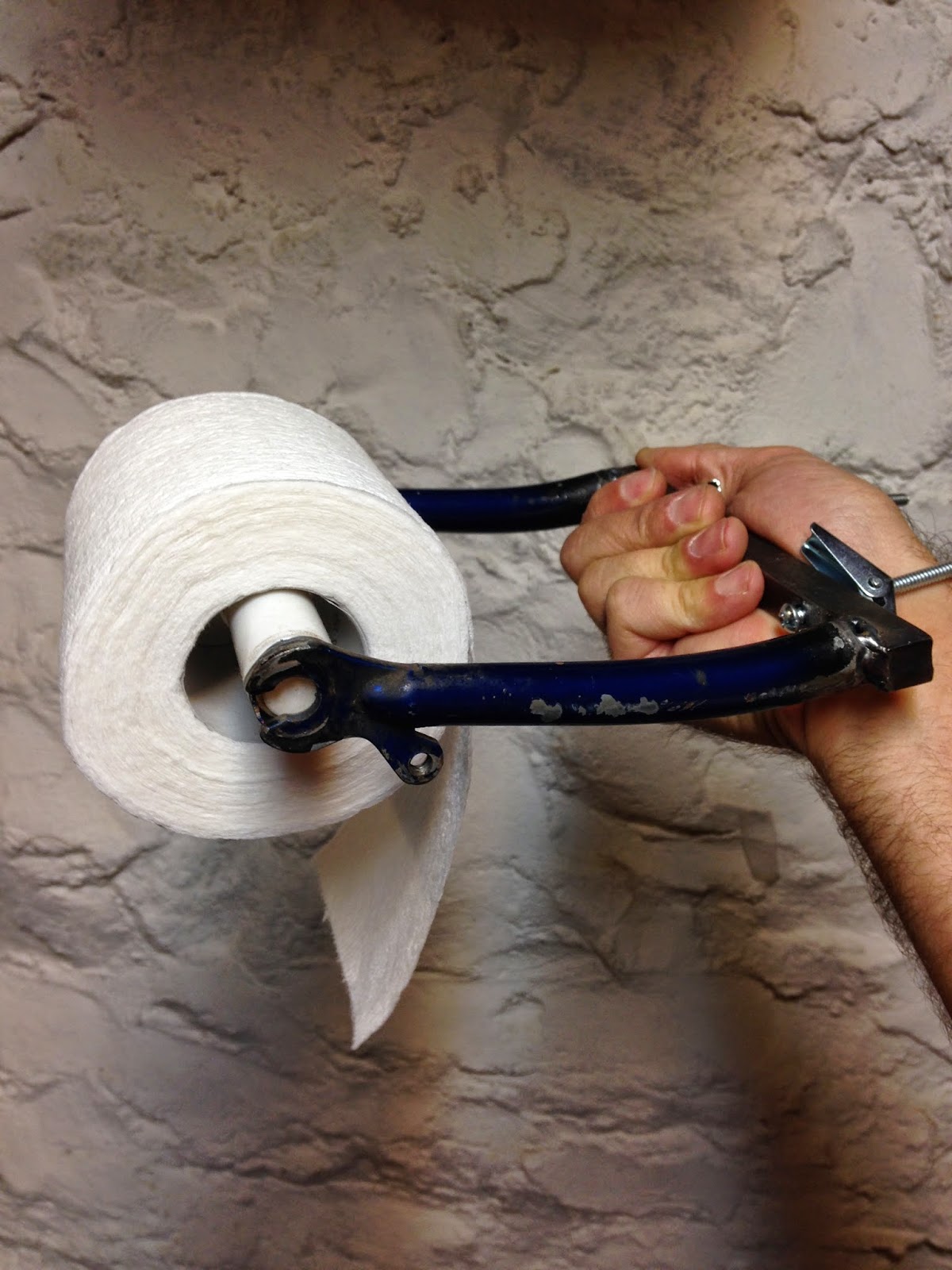 The one I made for the Co-Op’s winter expo last year (which I also was unable to attend) sold, so I figured I’d make another one with a different style. I believe the fork hails from The Mysterious Raleigh Sports. I almost never get to see who buys my work, so whoever buys this please tweet me a picture of it (just it - no pictures of you using it, please) after installing in your home or place of work - @michaelknorris.

As an aside: while I was volunteering at the Ohio City Bicycle Co-Op this last time around, I learned something: if you want to make a bottle opener from an old shift lever, saw the bottom straight up at a ninety degree angle, and then saw the top as such. 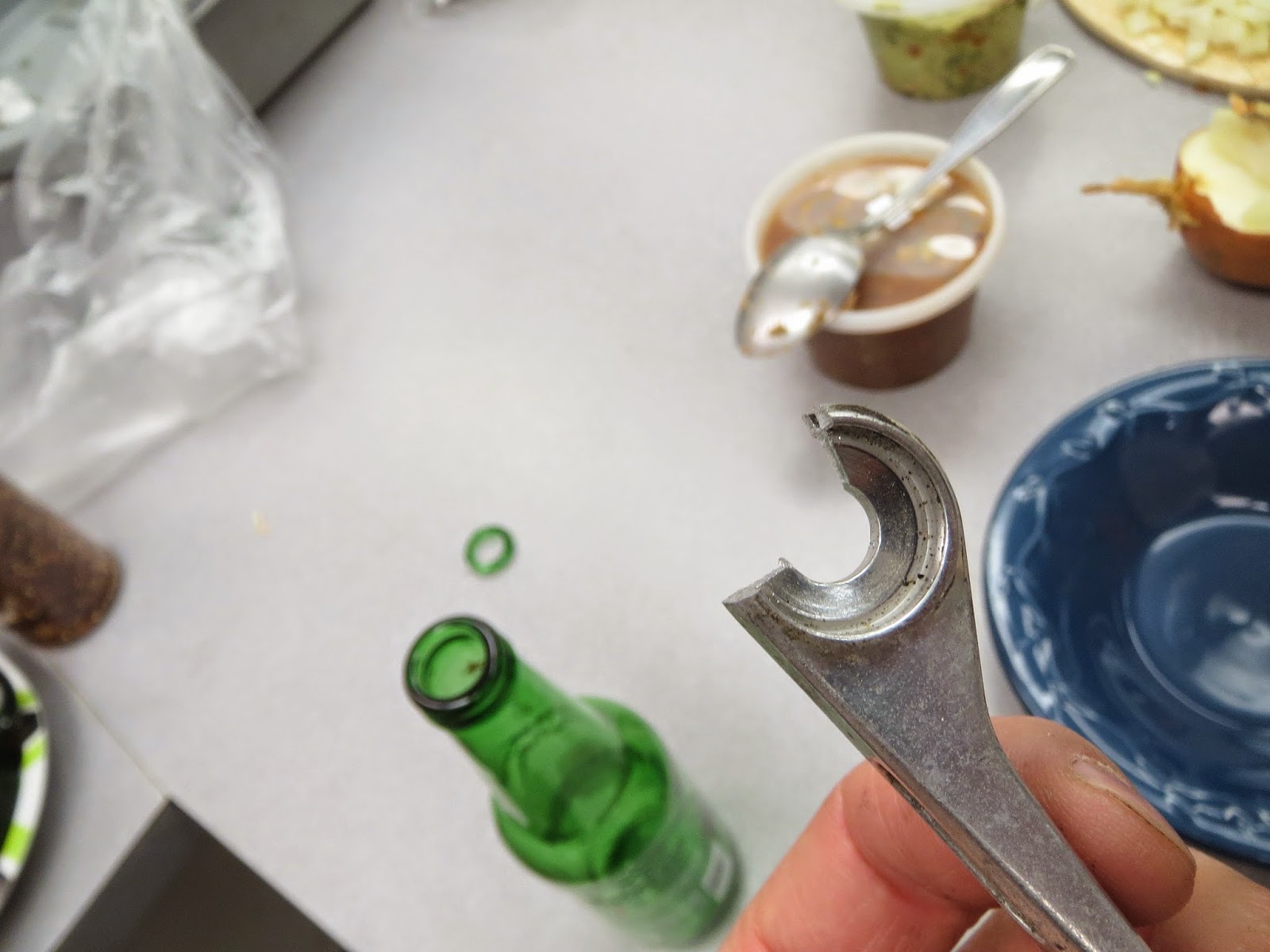 Also, while in Cleveland on this trip, I learned that a bike share program called Zagster launched. I know nothing whatsoever about the company other than the fact my spell checker despises that name. I stumbled across a docking station on my way to Fridrich’s. 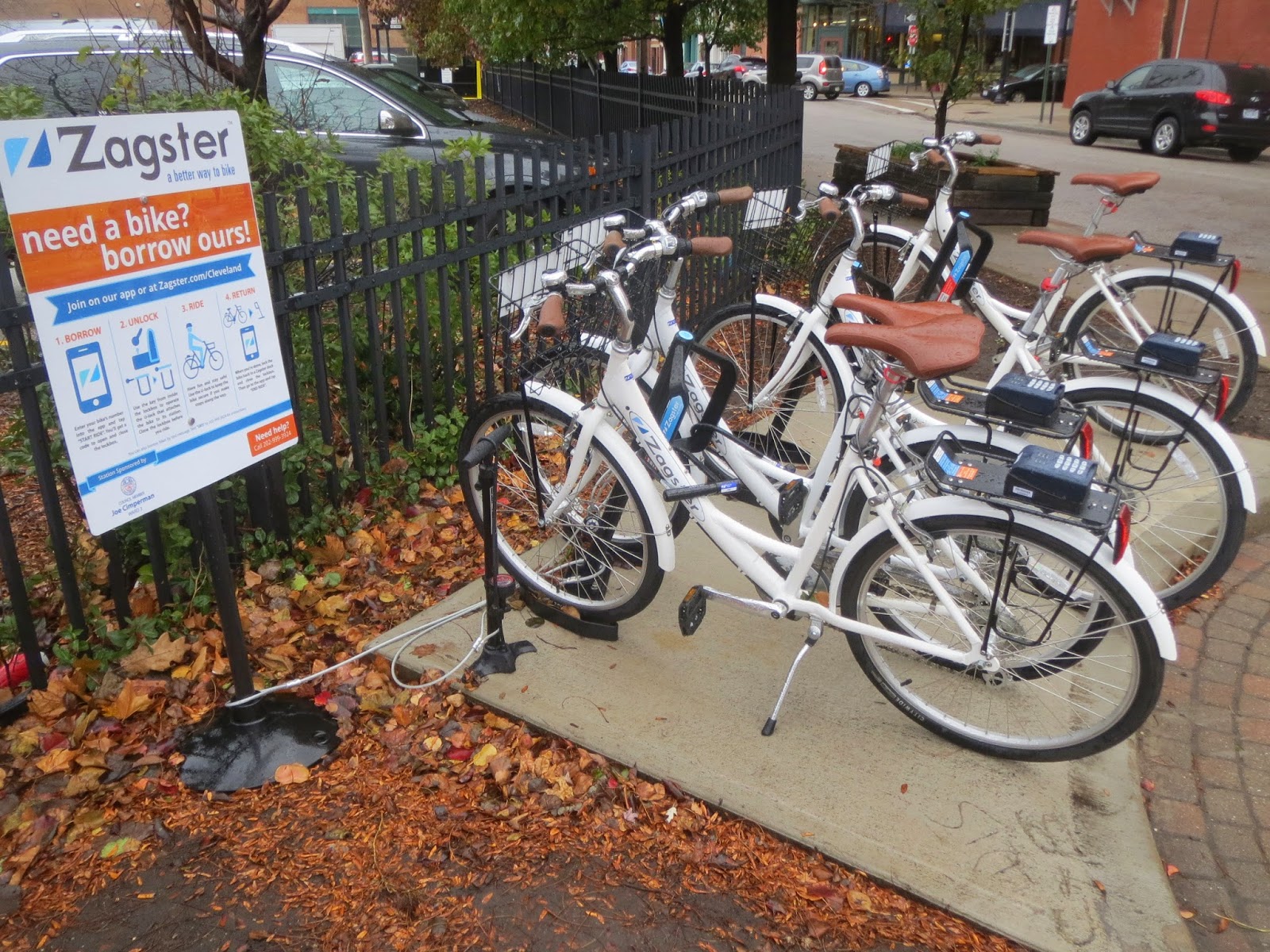 I also learned that Ohio City Burrito - right next to Joy Machines -  knows how to do bike parking in front of their businesses. I hope the new Republican Congress offers tax breaks to businesses who commission bike racks like this (not a bad thing to do before you come to Cleveland for the 2016 convention). 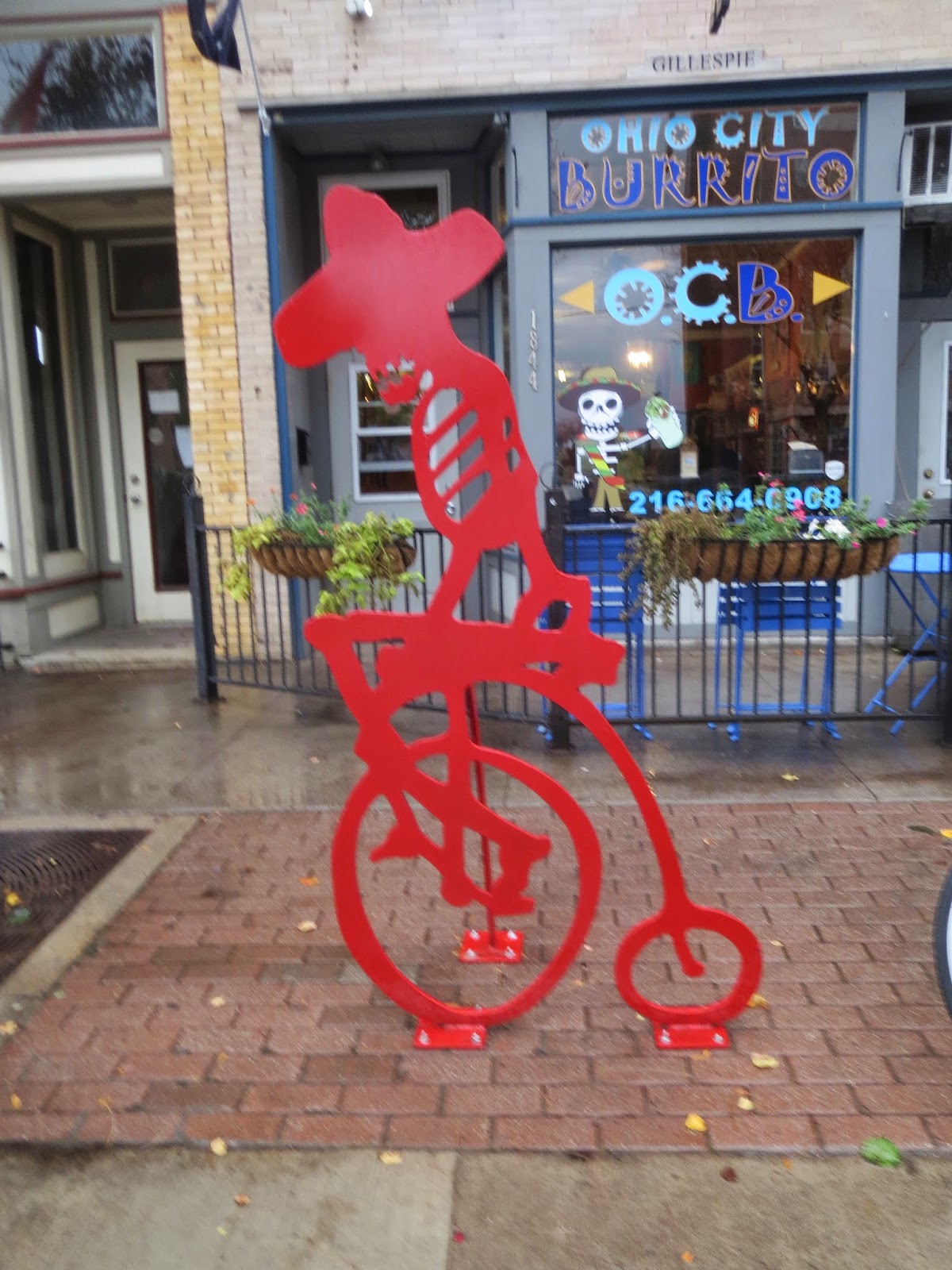 I also learned, while shopping at Blazing Saddles, that Bike Cleveland is responsible for a lot of yellow signs telling drivers to share the road and watch for bikes. 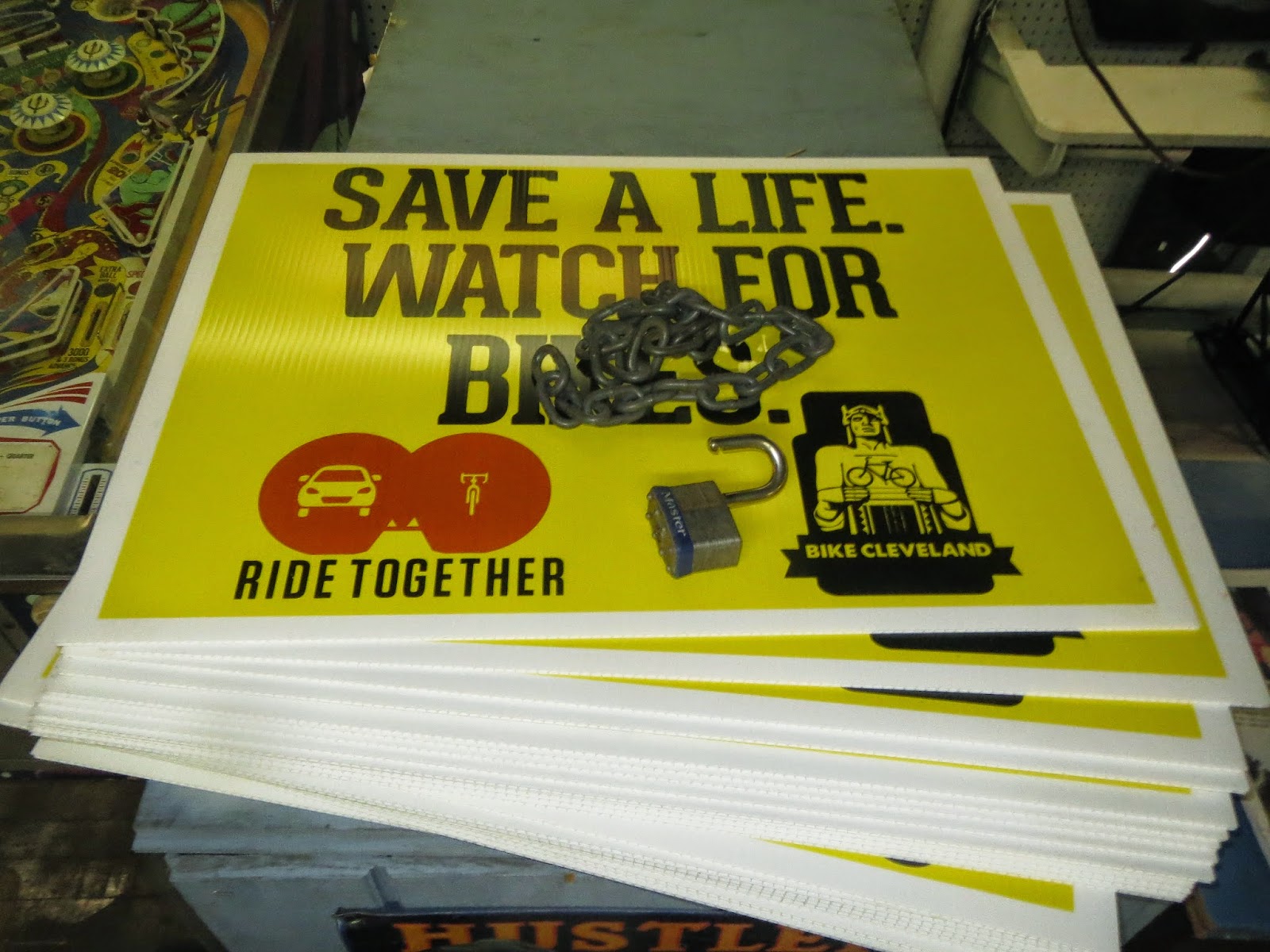 The last thing I learned was that if it rains in Cleveland Jesse Pinkman will finish his shift at Walt’s lab early. 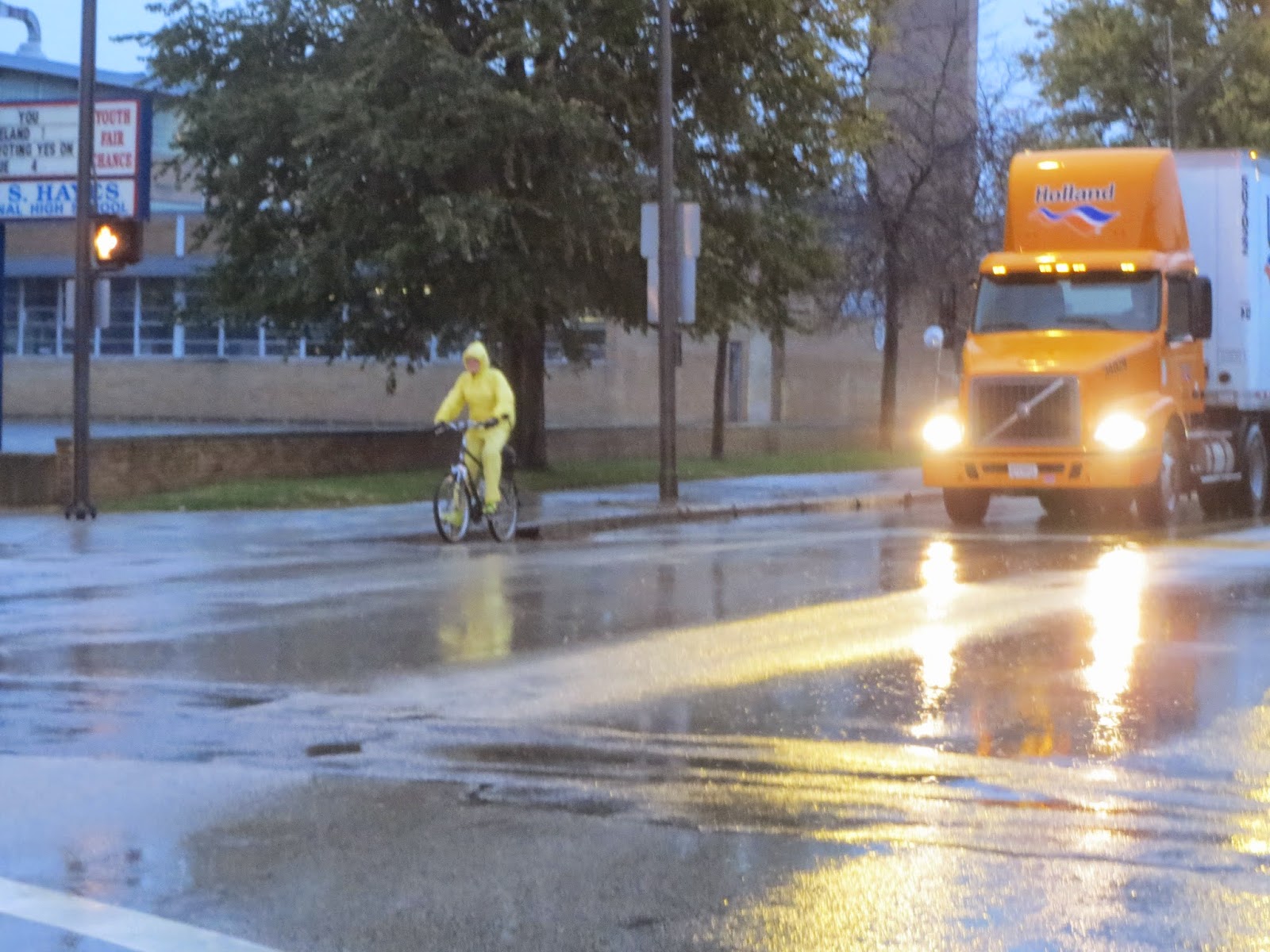 There’s a lot more I learned from Cleveland but that will have to wait for another post. In the meantime, if you are anywhere near Cleveland tonight head to the Ohio City Bicycle Co-Op Winter Expo. The Columbus Rd. Bridge is still closed, so if you need help getting there visit this link. Have fun and make friends - and I wish I could be right there with you. Thanks for reading and thanks for riding. 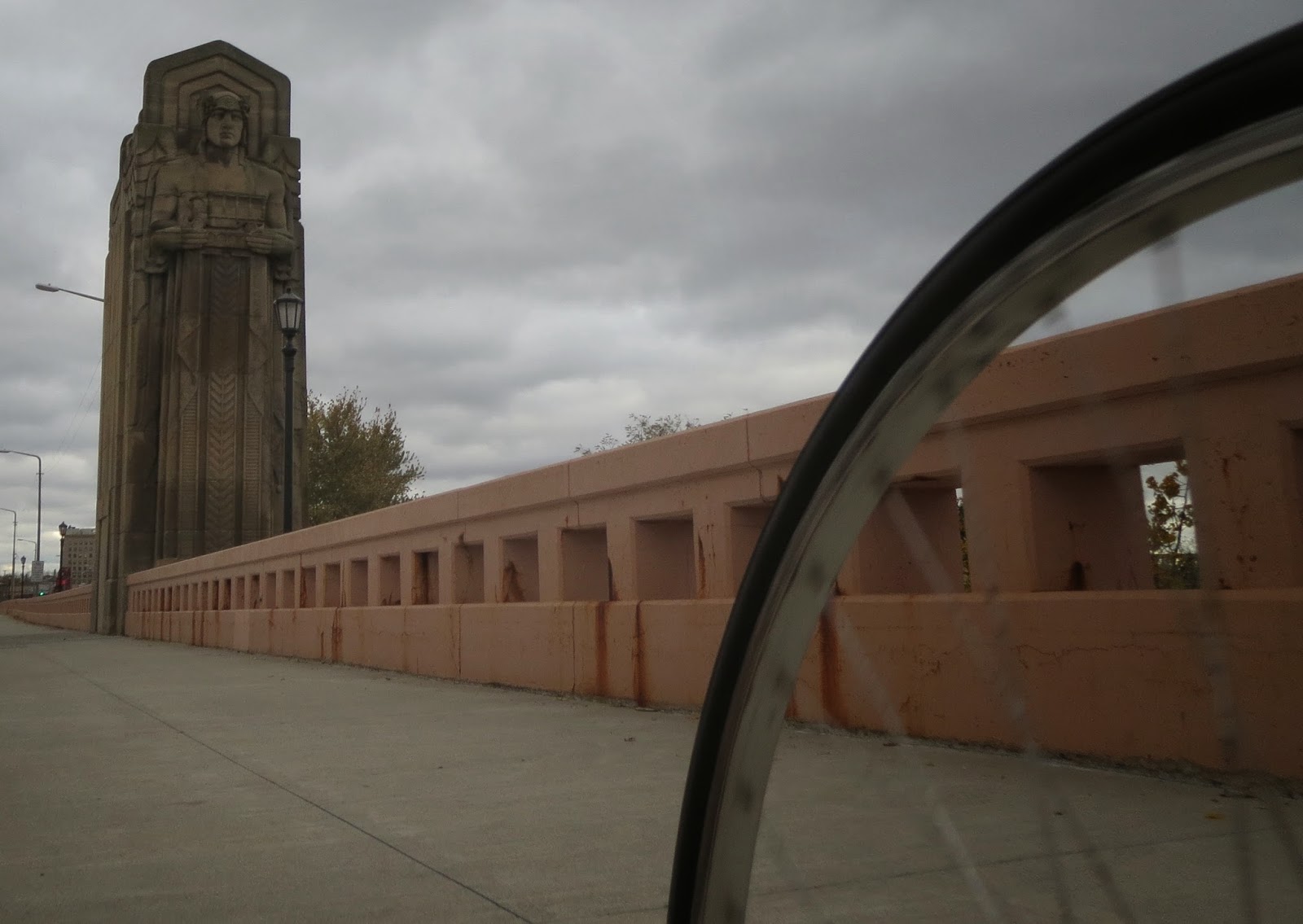