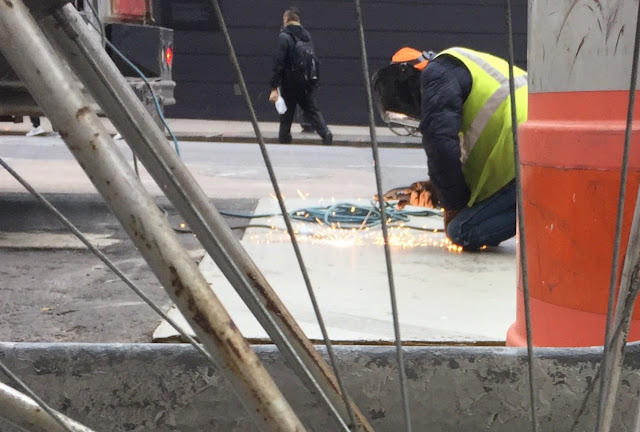 "This is the year we spend Christmas alone at a Denny's in Witchita, Kansas.

This is what I tell myself every time the trip from California to Connecticut begins. There are so many interconnected stages of the journey barely holding on to one another that if just ONE thing goes wrong it can be chaotic - and if that one thing is the flight, that's it.

In the span of 25 hours, I took one overnight cross country flight, three Lyft rides, three New York City cabs, a Metro North Railroad trip, a two-hour Amtrak trip, and two car rides from friends and family just to get from San Jose to a small house in Mystic, Connecticut where my parents live. This is where I learned how to kayak when I was a kid. 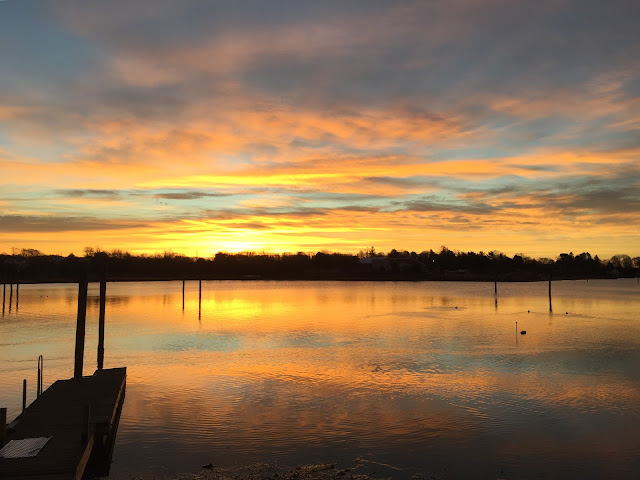 Mine sure was, and I was feeling it as I was groggily wandering New York City around ten in the morning on Friday, December 22nd. 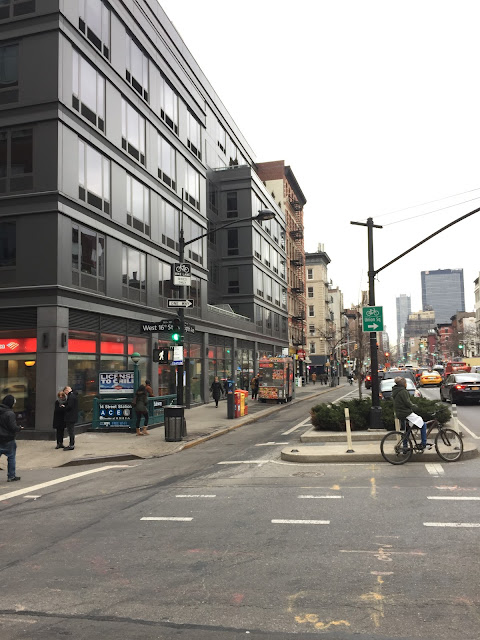 Because of the way the day was structured, about two hours after the plane landed (In New York and not Wichita! Woo-hoo!) I had about two hours to myself near the corner of 8th Avenue and 16th Street. It was cold and I was wearing a wool coat I had mashed into my carry-on and a hat with matching gloves that only sees action when I visit the East Coast.

After a long red-eye flight all I wanted to do really was sleep. But as I wandered up 8th Avenue I soon came to a CitiBike bike share rack.

I normally dislike biking without a helmet (like the talented writer Karen Kefauver, I believe one should bike in the world we have, not the world we wish we had) but I looked at 8th Avenue. It had a protected bike lane that stretched as far as the eye could see.

My jet-lag addled brain hatched a plan: I'd get a bike, ride up to NYCeWheels (a bike shop I used to blog for that specializes in folding bikes and urban scooters) and do some shopping. 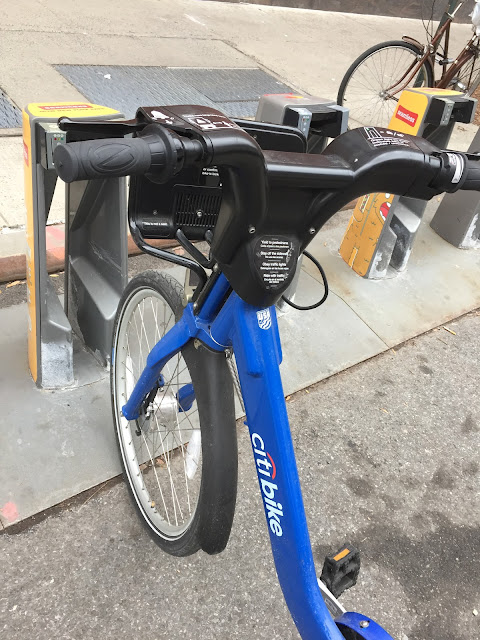 As you know by the white paper I wrote a few years ago about Bike Share in London, I'm well versed in how to use a bike share bike when you don't have a membership: stick in a credit card, follow a few dodgy prompts, and unlock a bike. It's easier than I remembered, and unlike London I knew where I was going.

At least I thought I did. NYCeWheels had changed locations since I had last been there - they are now on 58th St. between 1st and 2nd. A little closer than I thought but still over three miles away.

So I pedaled north. 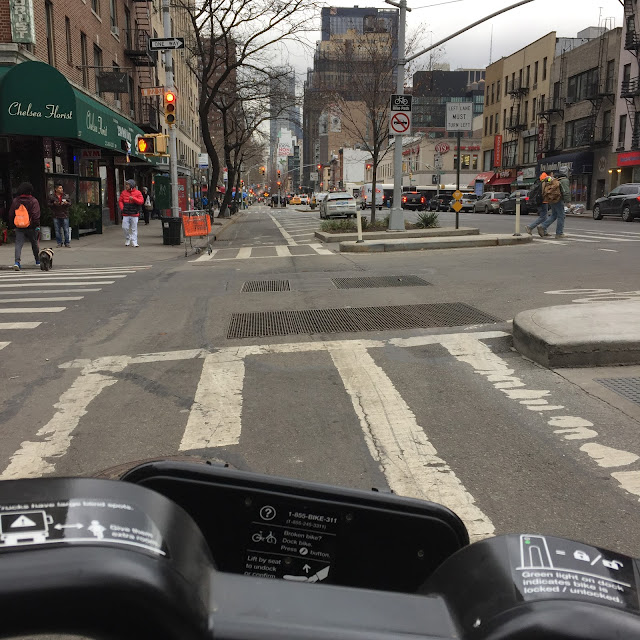 It was the longest period of time I've spent on a protected bike lane, and this was a pretty good one. I've never liked bike lanes that keep me corralled in such a way I can't get back into traffic easily (like when I want to make a left turn) but this one worked pretty well.

I also enjoyed being outside in a city I still feel more at home in than I do now in San Jose. I briefly thought of the ten Five Boro Bike Tours I had done and wondered if there'd ever be an eleventh.

I made it to NYCeWheels a little after 11 in the morning. Lucky for me their new location was easy to find. And the little ramp they had outside leading into the shop seemed inviting. 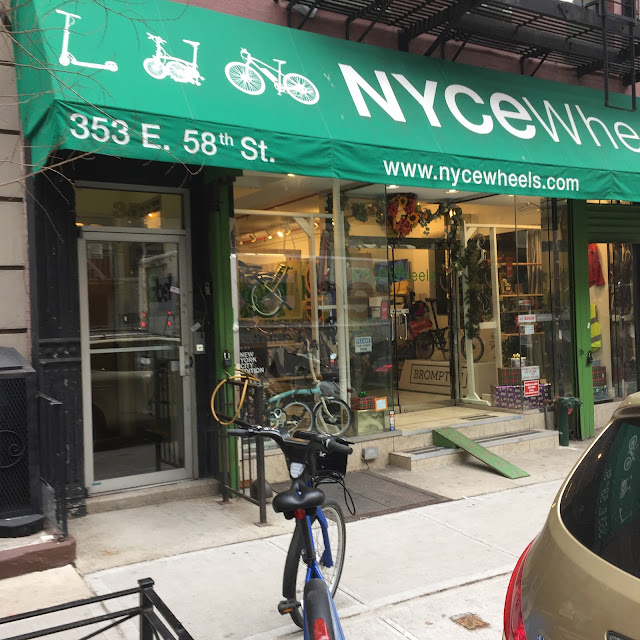 With no docking station nearby I simply rolled the bike inside where I got to see NYCeWheels' new digs. 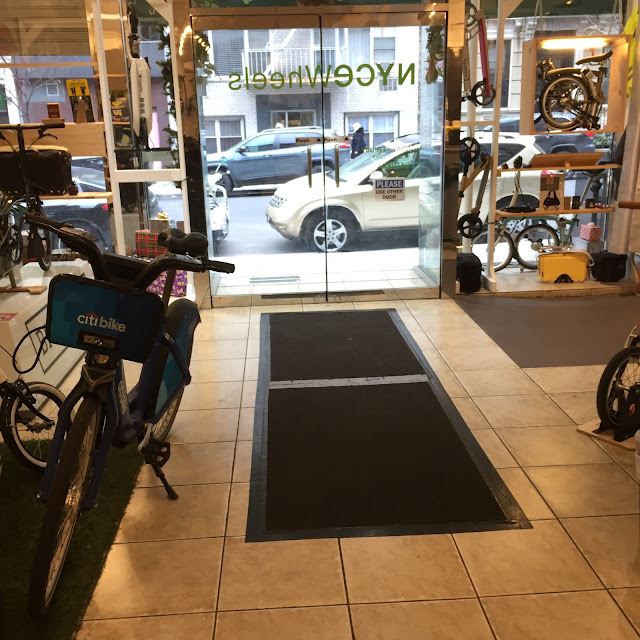 They had definitely moved up. Their old location was tiny and this one had the room for plenty of Bromptons and quite a few accessories. I've admired these bikes for years - and my admiration only went up when I got to tour the Brompton factory in London a few years ago. 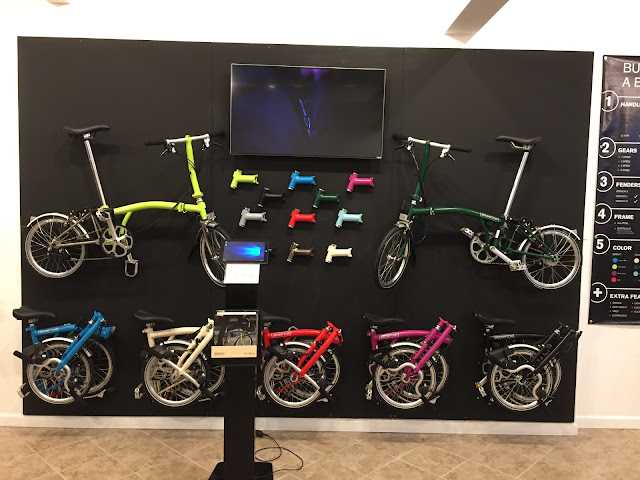 I bought about $200 worth of stuff that I couldn't find in the Bay Area - and I reasoned it was worth having to carry this stuff the rest of the entire Christmas journey.

First I needed to bring it back to 16th and 8th. Luckily I easily latched my complimentary plastic bag* to the front rack. I checked my watch. I could just about make it if I hurried. 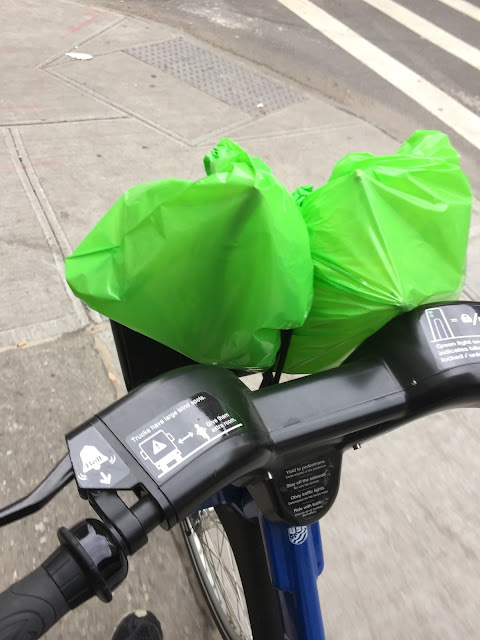 Sufficiently warmed up at this point I definitely pedaled faster to get back. Not in the relative safety of the bike lane for a chunk of the way I shared the road with cars and felt the kind of pleasant, Premium Rush-ish "I'm home" feeling I hadn't felt in a while. Almost no electric cars, no Access OK stickers. Just potholed streets, ornery drivers, mysterious vapors rising from the street. New York delivered a cycling experience that only New York can - and I was thrilled to be a part of it. 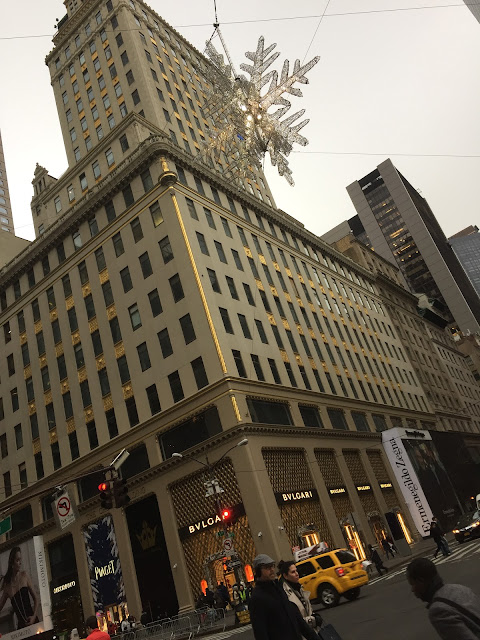 I returned the bike to the docking station and walked briskly to the meeting point at 16th and 8th with minutes to spare, holiding my bright green plastic bag. I ended up stuffing the contents into a suitcase and later made it up to Level 5 of Luggage Tetris to make everything fit to go home.

Now this may just sound like a nice story, or a good way to pass time, but I like to think it's more than that.

You see, The New York Post recently published a column by Steve Couzzo titled This is the Single Biggest Threat to Progress in NYC. Couzzo correctly cited traffic as a huge problem facing the city but, like so many others who defend cars, is pounding nails into his own forehead and blaming others for the headache.

Read his piece (as well as the other cringeworthy article from the Post editorial board bashing congestion pricing).

Cities have outgrown cars. We need people to drive them less. Our lungs, bodies and financial solvency depend on it.

Congestion is caused by car traffic and productivity is lost. Part of how to combat that is by creating safe bike lanes (like the one I enjoyed) and giving people more opportunities to use a bike in the first place (like bike share).

Think for a moment: $200 went to a small retailer in New York City I never would have gone to since a taxi or Lyft would have been too expensive and slow. But the city provided infrastructure and means for me to stimulate the economy.

Couzzo and those like him probably just defend cars out of habit - or because they drive one themselves and just want to get to where they are going faster. So they peer out of their windshields and make checklists of things that should go away to enable them to do that. But nature abhors a vacuum, and cars will take up any space that we give to them. So taking away bike lanes will only make car traffic worse.

The city is moving in the right direction. Yours might be too. Some streets are being taken away from cars altogether, which is what needs to happen more often, not less often, going forward. We also can't deny congestion pricing will help NYC even more. 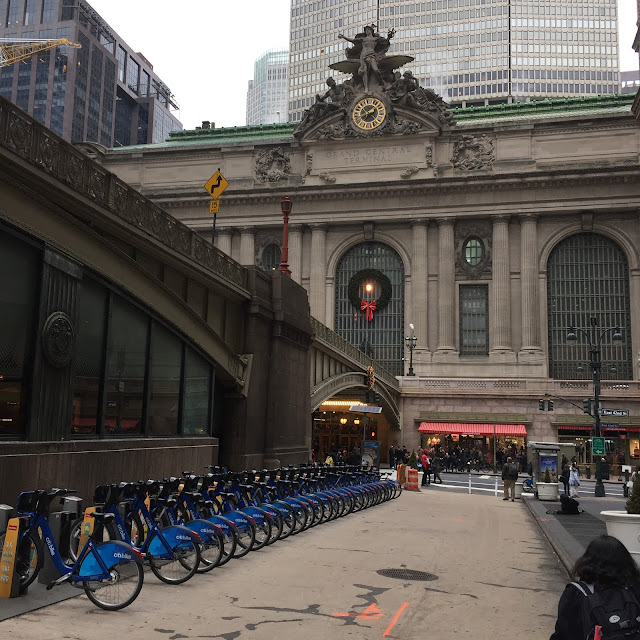 So keep moving forward, New York City and other cities. Ignore the naysayers who don't understand the concept of induced demand. Take more from cars, give to cyclists and pedestrians. And I will make damn sure I'll visit more shops again even when busy travelers like me only have a narrow window of time to shop in New York.

I have no ending for this, so I will show you a picture of where I biked on the West Coast on New Year's Day: Fort Ord. 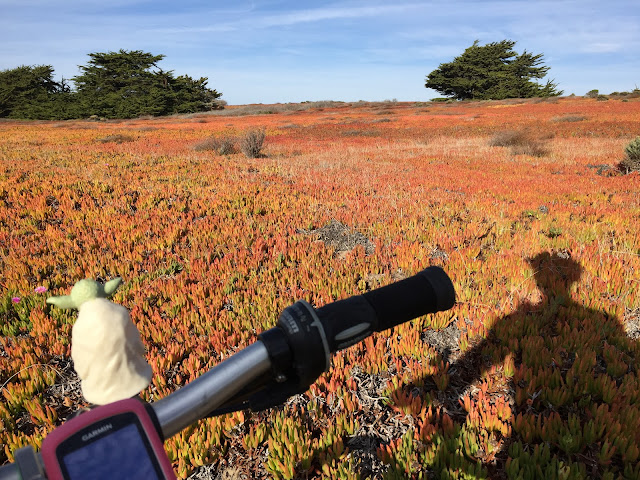 *you can't get that so easily in California.