How Complete Streets Can Save Lives 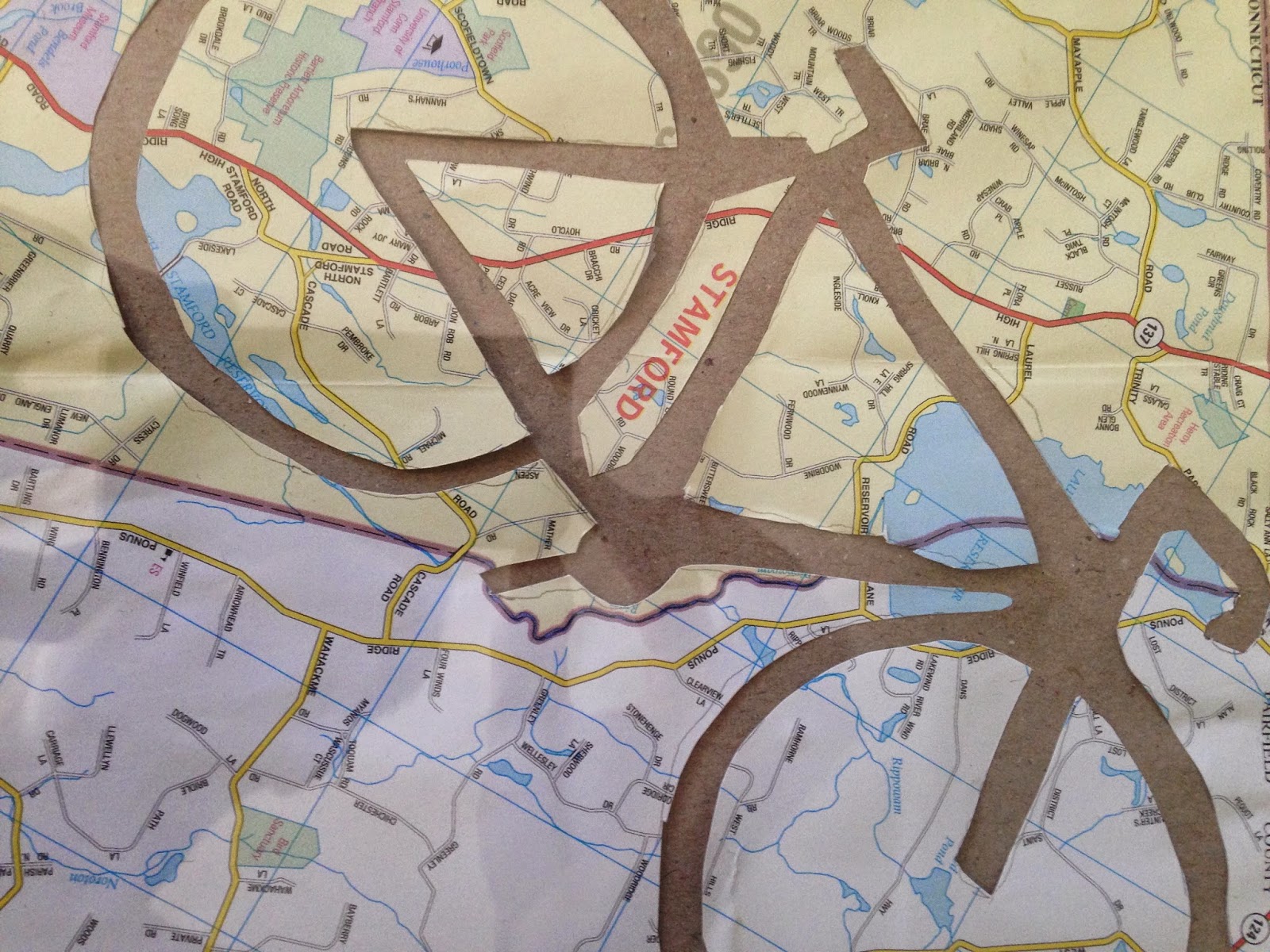 Stamford, Connecticut. It's the only city I have ever lived in and one I've been calling home for ten years now. And a pedestrian died this week after being hit by a motor vehicle - the second death in as many months.

That means that so far in 2014 more people in Stamford have died from being hit by a motor vehicle than have died as a result of homicide. No cyclists yet in Stamford (but I noticed on WTNH a 10 year old was hit by a truck and died while riding a bike in Suffield yesterday afternoon) but the thought of building a 'ghost bike' for someone here terrifies me.

Were I a clever satirist I'd put together an 'SUV Buyback Program' event or something. But instead I'll just hope the writers of John Oliver's 'Last Week Tonight' run with it instead and show you where this woman was hit. 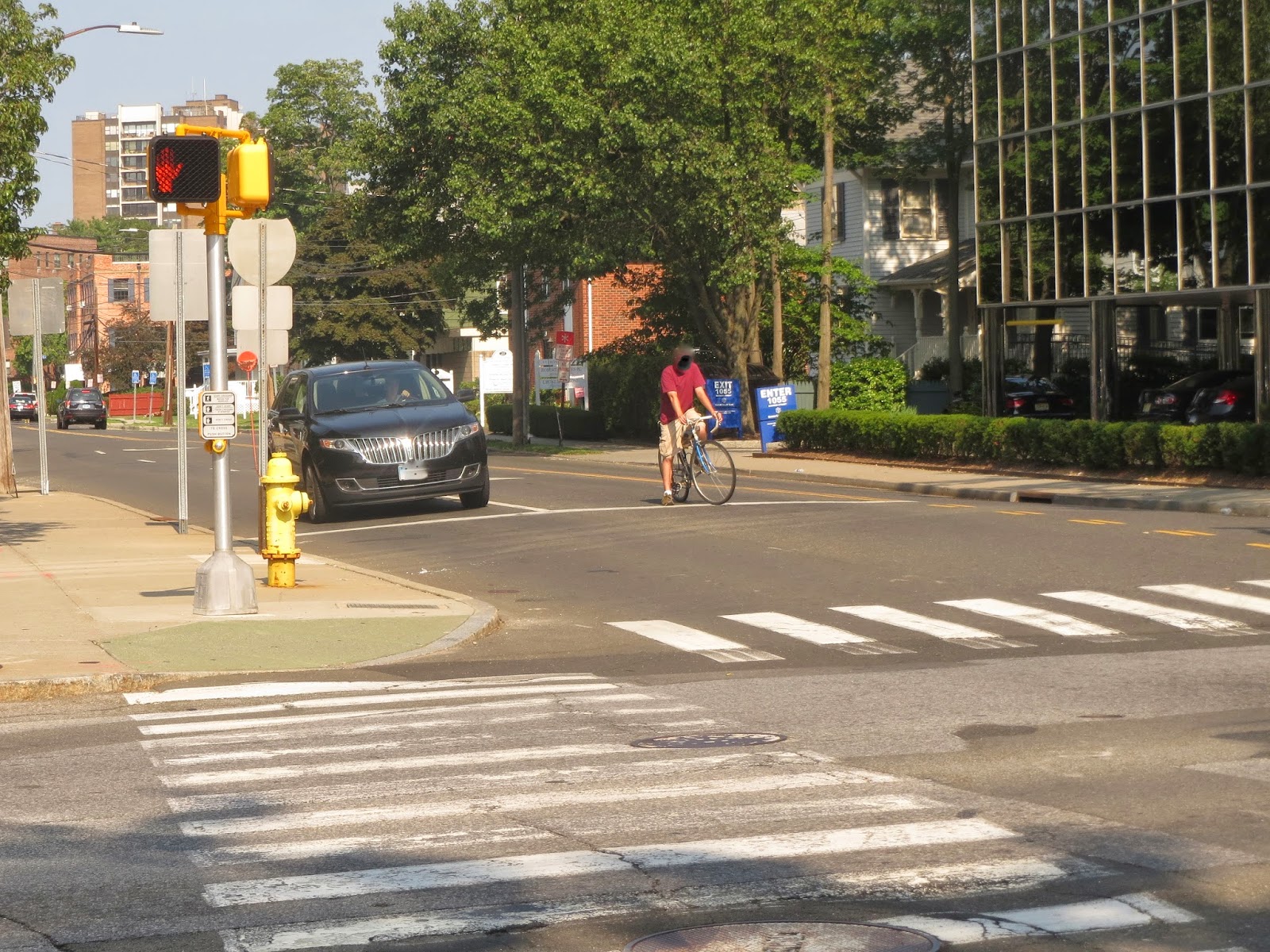 According to News 12 and other reports, she was crossing Hoyt when an SUV turned left from Summer Street. I've driven or biked by that spot hundreds of times. I'd make the left myself back in 2012 when I had jury duty since Hoyt Street leads to the courthouse. Last summer, I biked with Michael Fedele, David Martin and William Tong as part of my effort to convince the next mayor - who turned out to be David Martin - to make the city more bike friendly.

I addressed the whole question of whether or not the woman crossing the street was in the crosswalk or not in my Stamford Patch column and will refrain from accusingly suggesting the woman of the SUV was texting/using her phone at the time. Instead I'll press my miniatures to work like I did in the riding at night feature. 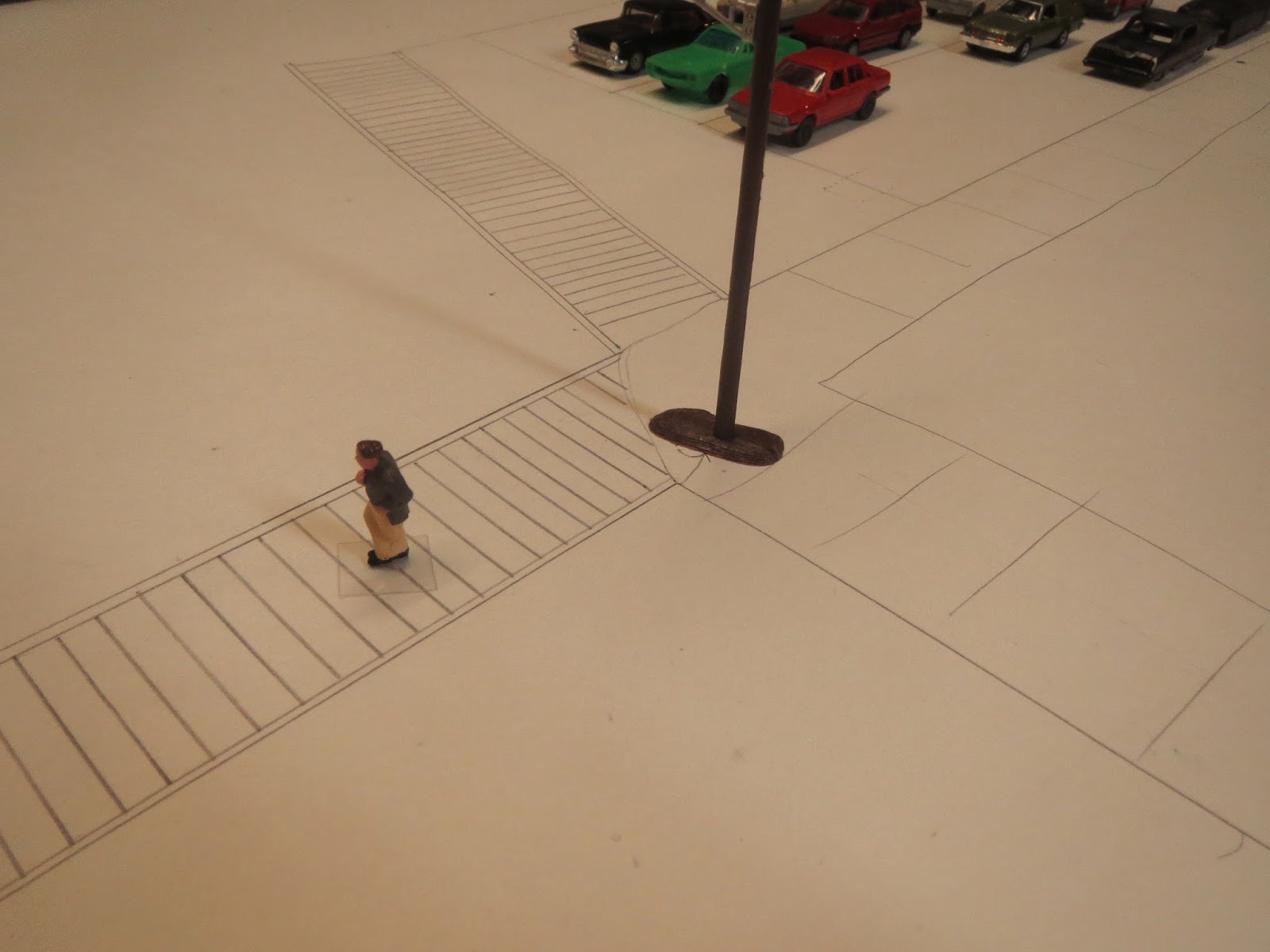 But before making the model, I took my rolling tape measure to the intersection where the woman was killed. Two things saddened me immediately. First was the bouquet of flowers, and the second was that I couldn't tell which button to push in order to cross Summer Street. 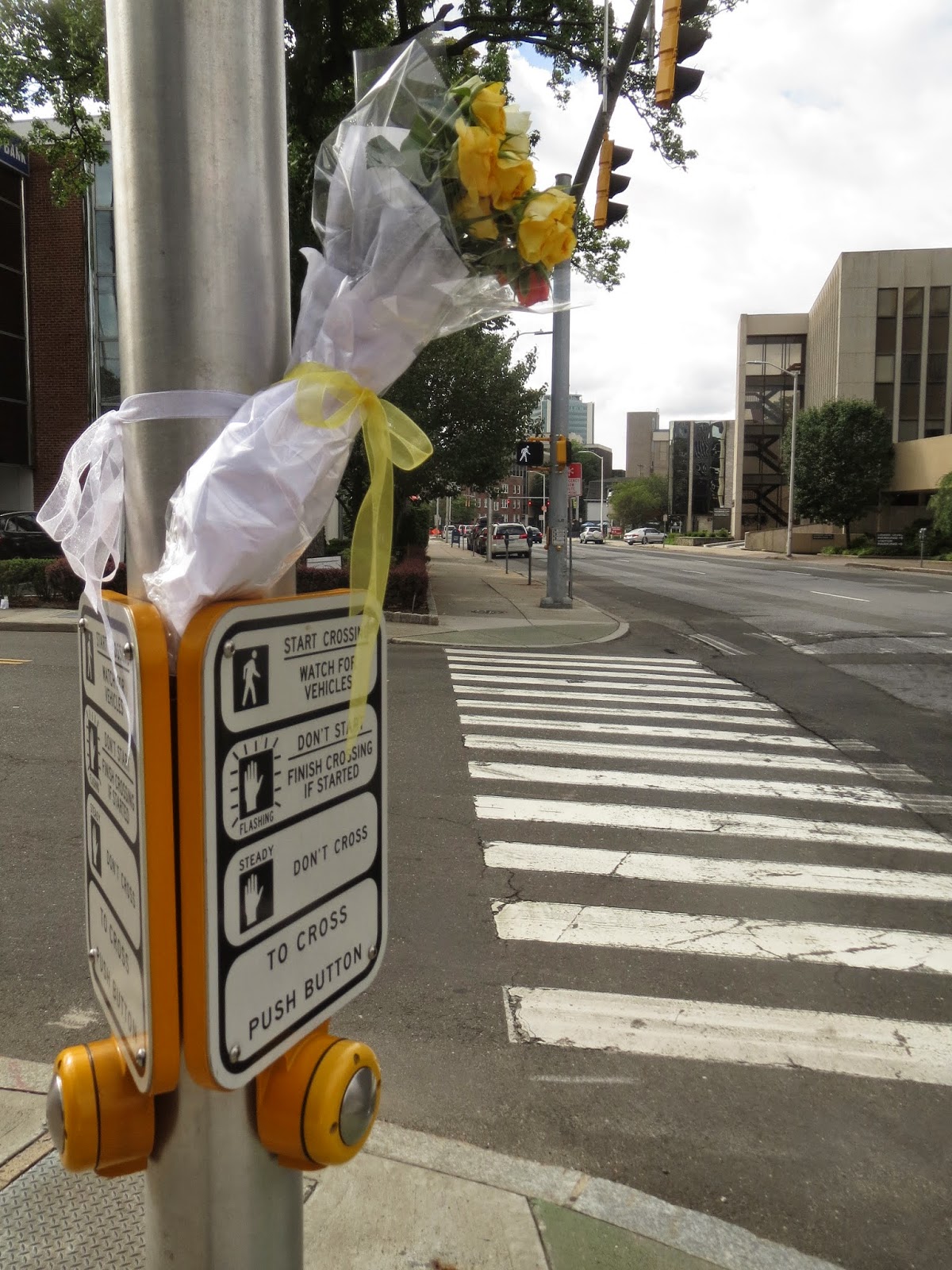 I eventually got a walk signal, and I ended up measuring the center of the crosswalk and both edges - losing count over how many times I crossed all the streets. I also measured the distance between the crosswalk and the stop line. Using an HO scale ruler I was able to make a decent model of the intersection. 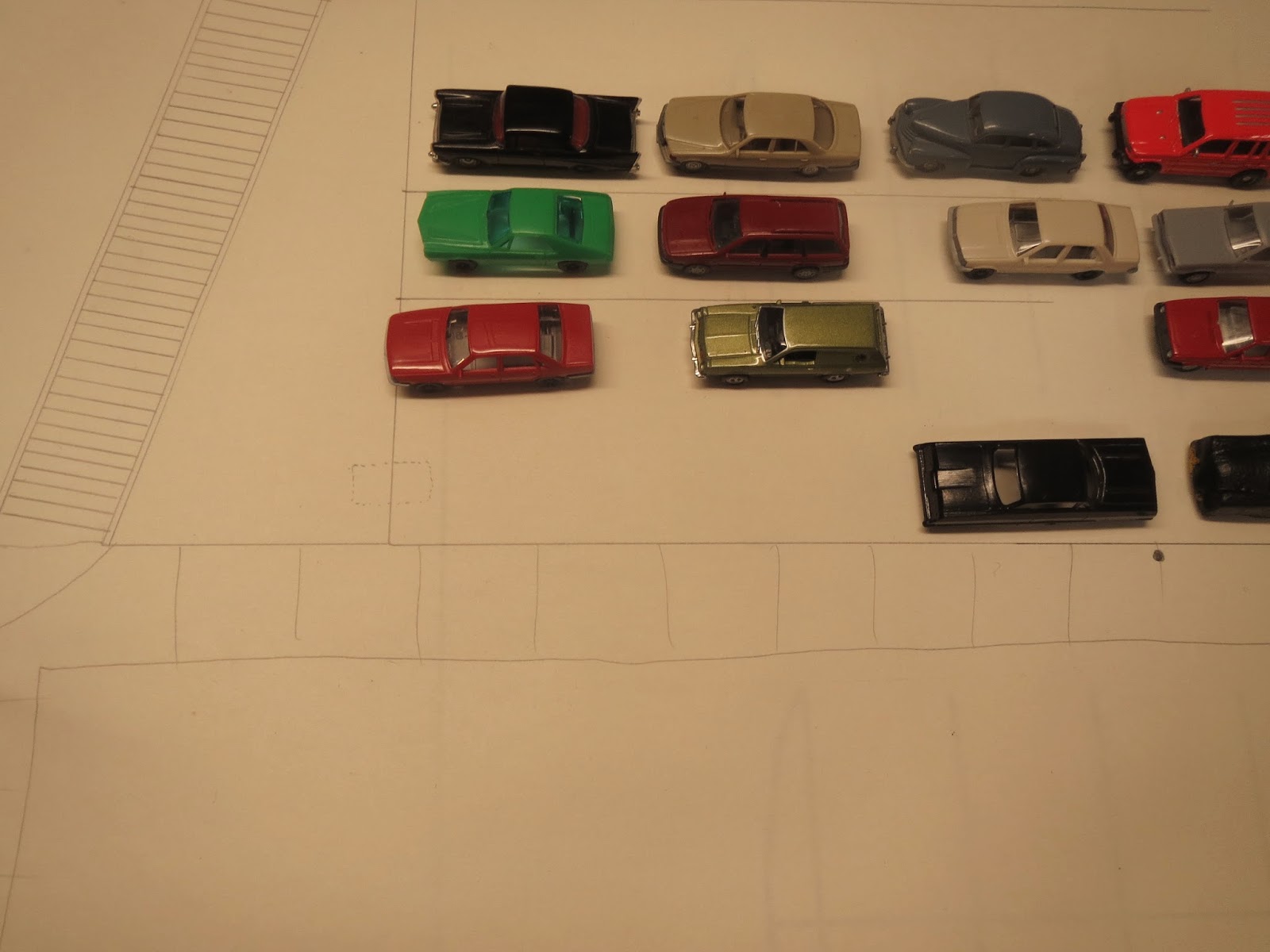 The black cars near the curb are parked: the little dot on the sidewalk is a parking meter, which stands almost 77' from the edge of the crosswalk.

Two particularly important measures: the distance between the edge of the Hoyt/Summer corner crosswalk and the stop line is 20' (it tapers off to 9' on the other side of the intersection, which is why the crosswalk is at an angle). Also, one has to walk about 20' from the edge of the curb to the first lane marker (between the red and the green car).

No bike bloggers were harmed in the collection of this information. Pushing a rolling measure while wearing a Pollos Hermanos T-shirt appears to give motorists pause. After taking the measurements I watched cars, cyclists and pedestrians for about an hour. I was appalled at the behaviors of some motorists - and I'll get into specifics in a moment.

But I could easily see how so many of the things discussed by the Connecticut Bicycle & Pedestrian Advisory Board could be used to make this one intersection safer for everyone.

Now a major component of Complete Streets is what's known as 'Lane Dieting' which is a buzzphrase-y way of saying it reduces the width of travel lanes. As I said, because the marker for the center lane starts almost 20' out cars in the left lane have a tremendous amount of space. More space means more speed. Sometimes I'd even hear tires squealing when cars would turn - not so much as turn but corner. 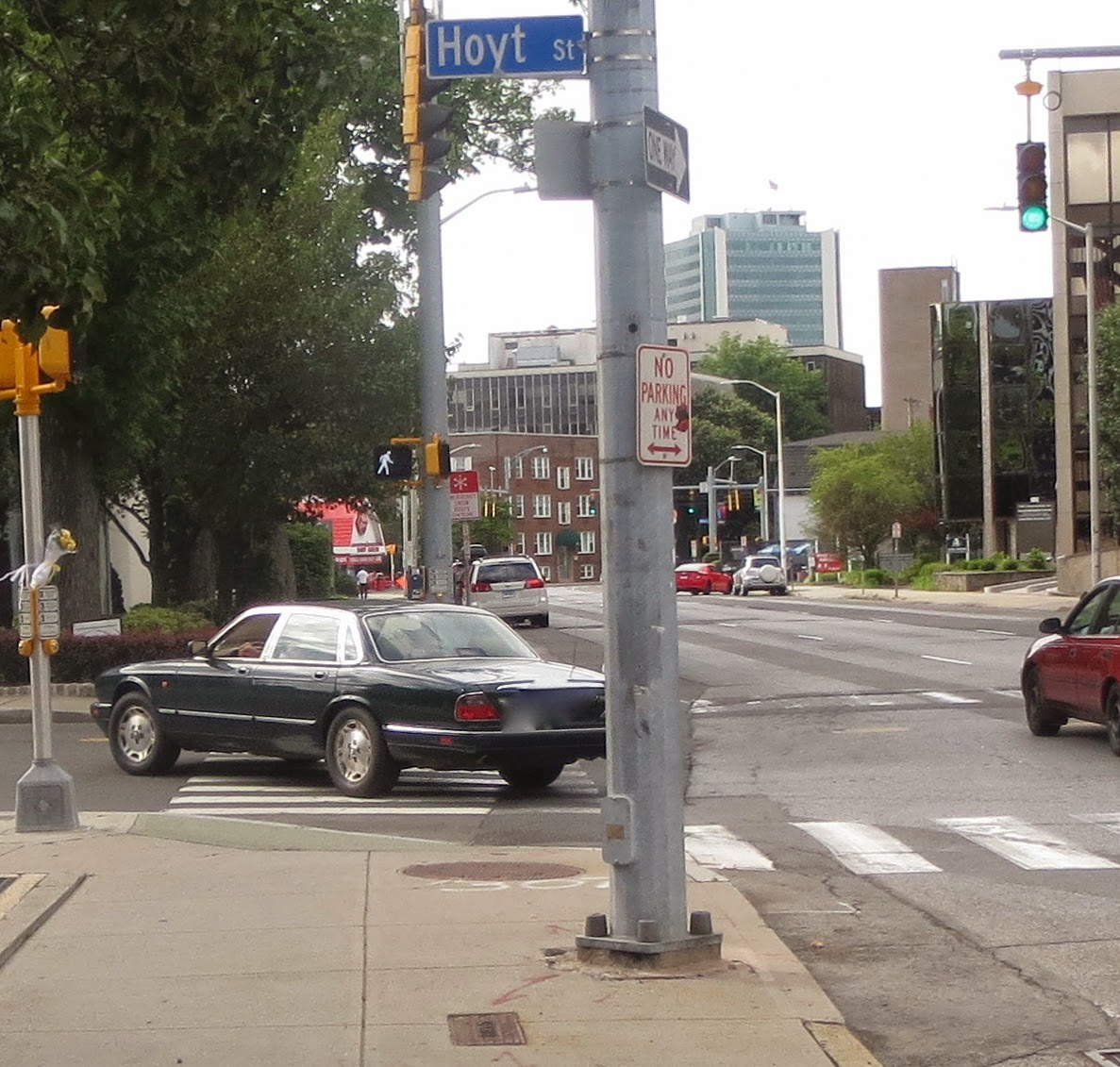 This green Jaguar is important because it, along with a Jeep Grand Cherokee I saw later, followed another rule of motor vehicles: they expand into whatever space that will take them. As I said, the parking meter starts 77' from the crosswalk and the first lane marker starts about 20' from the curb. So, if you want to spontaneously build your private and very dangerous fourth lane as you wait impatiently for the light to change, you can. 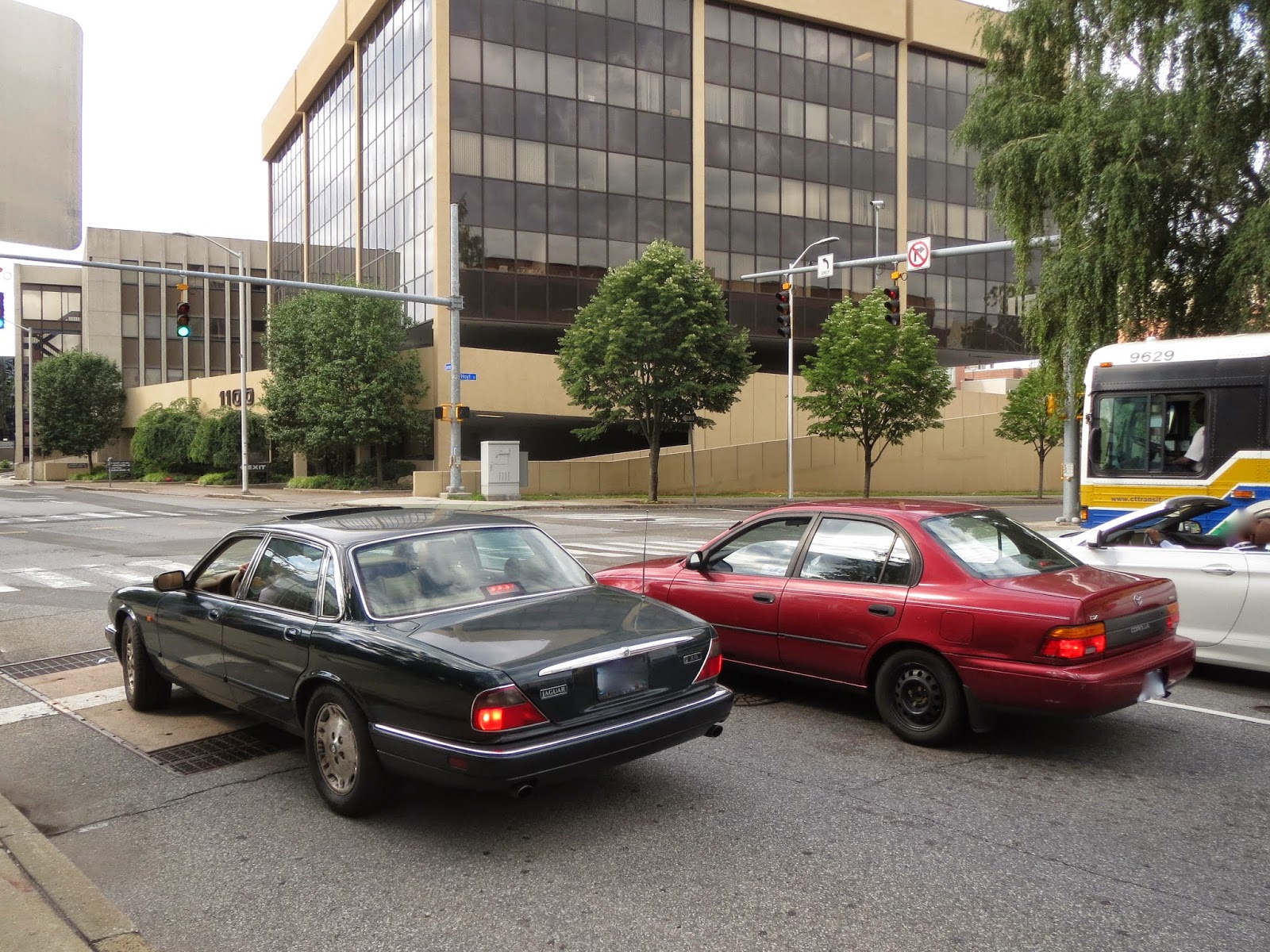 All of this space gives cars room to go wherever they want and to go as fast as they dare. When making the turn, the movement looks something like this. 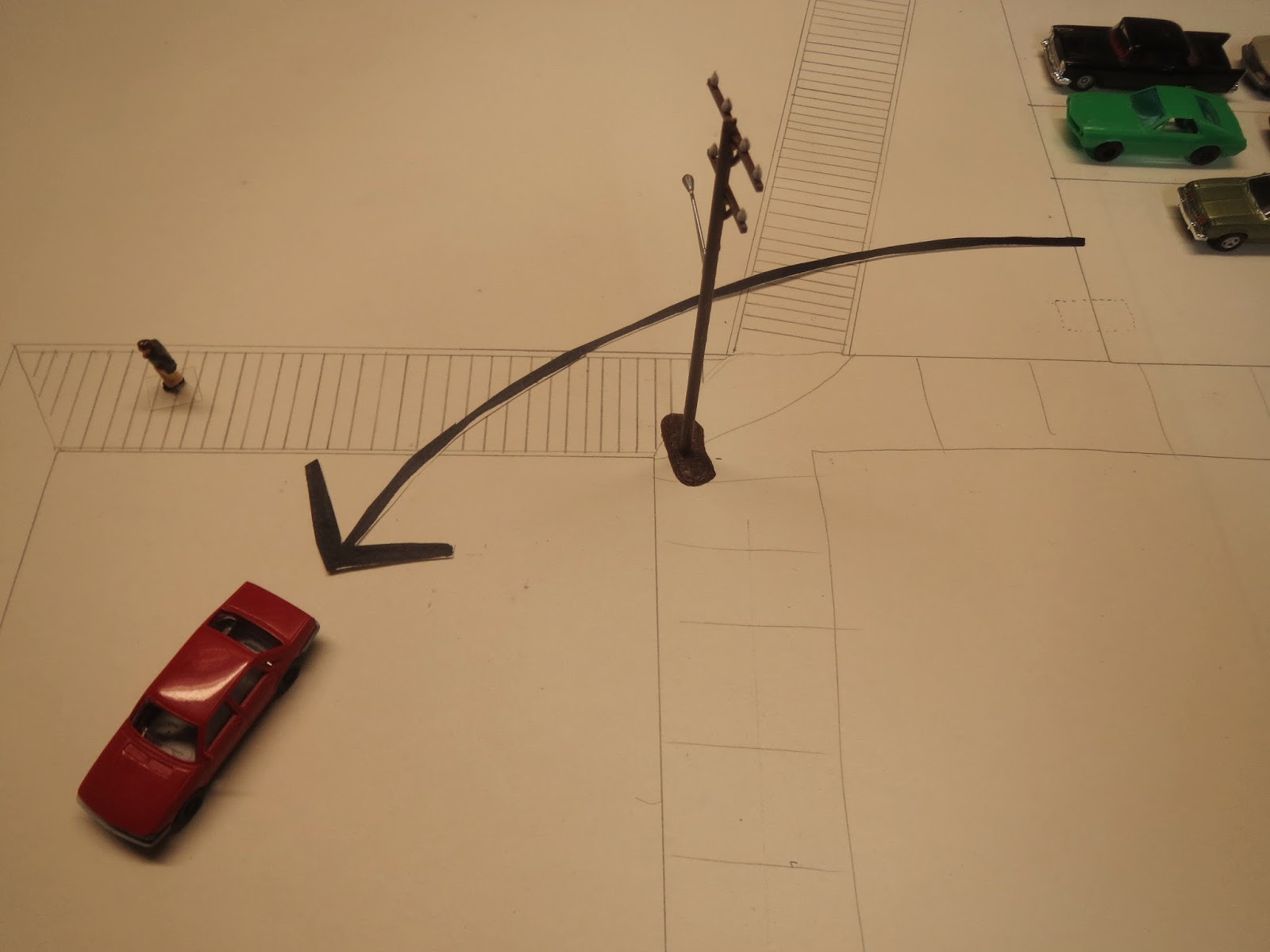 This got me to thinking of bulb-outs, which is when sidewalks are added on to and look as though the cement is digesting a small animal. It's more attractive than it sounds. Here's one on a corner on nearby Bedford Street, very close to Lorca. 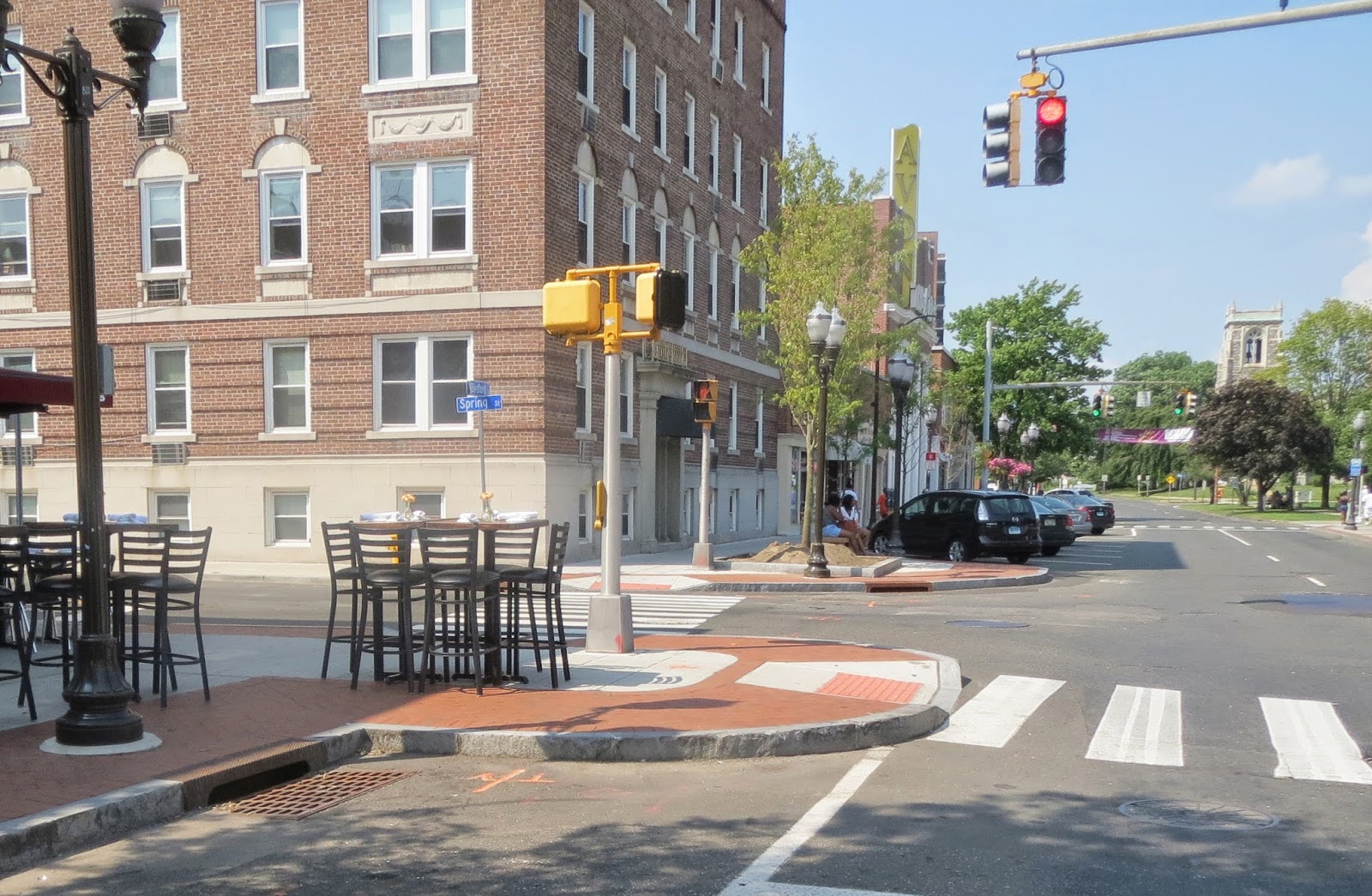 What that does is it forces cars to go a little bit further into the intersection before they turn, and a sharper turn means a slower speed. The bulb-out gives pedestrians a place to stand and be more visible when they want to cross. Even though there is a grate of some kind in the middle of the stop line on Summer Street, let's not rule out a bulb-out as we consider redesigning the intersection. 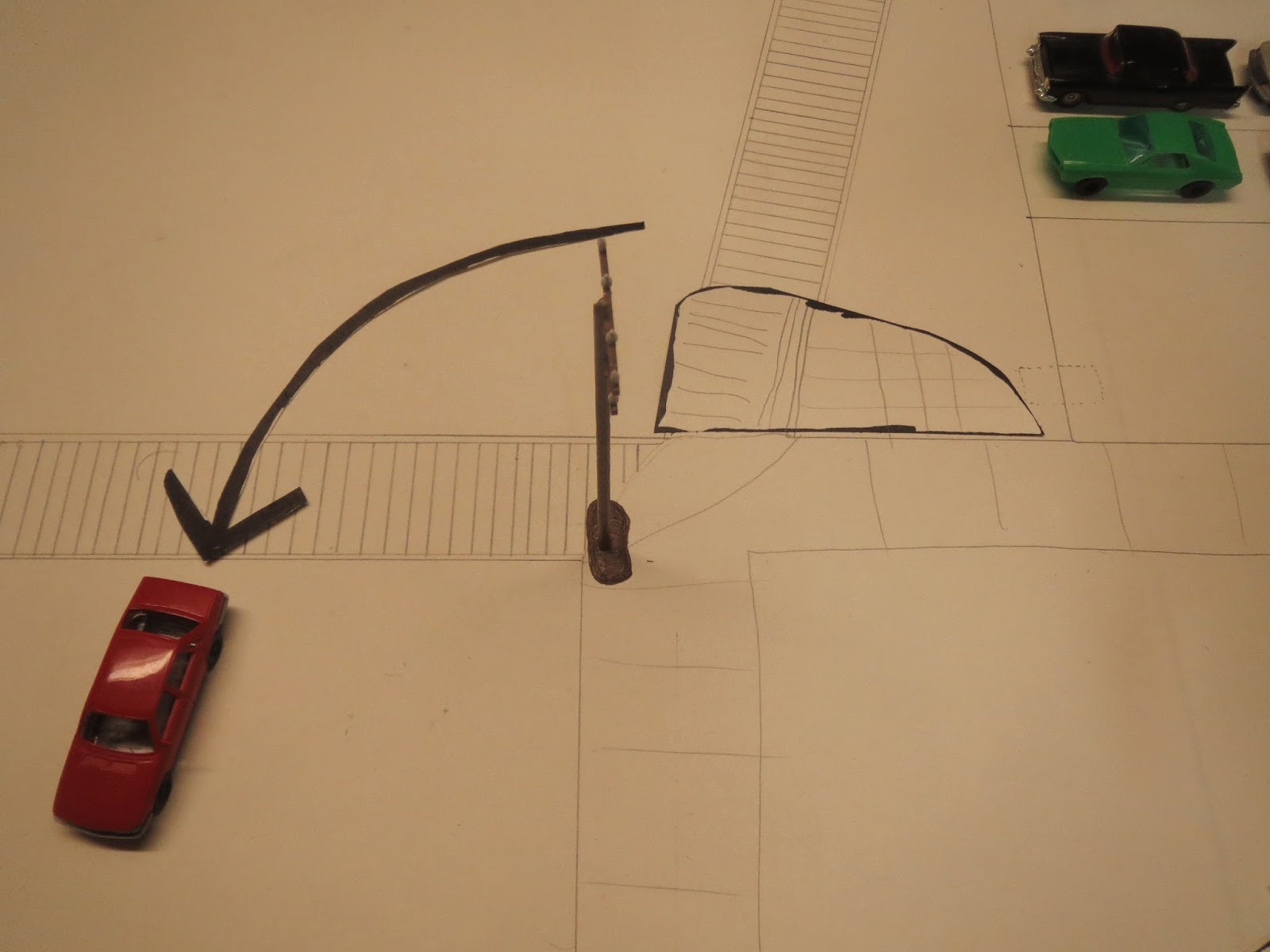 Now let's move on to another way of making a street safer: adding bike lanes. Because Summer is a one-way street I can imagine what it would look like with bike lanes on both sides or a lane on one side and a sharrow on the other. 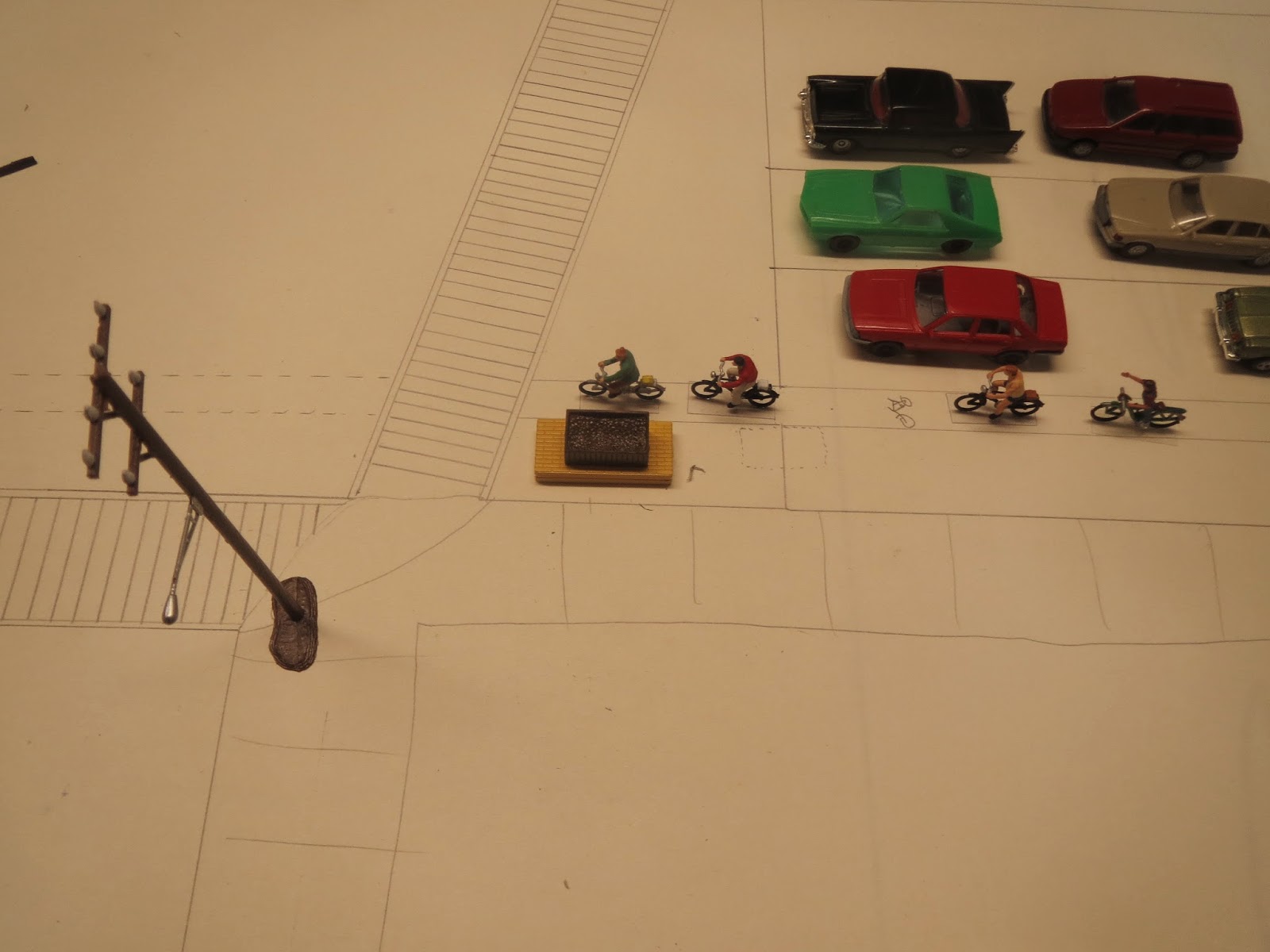 Now the paint on the ground mentally gives the driver of the red car less room to move when making the turn, and this person would also probably be driving slower as the turn was made. A bulb-out or some decorative element could be used to keep a very wide turn from being made. Dotted lines on the intersection marking the bike lane is also more information for the driver to process - which also translates to a slower speed.

Also, more people would be encouraged to leave their cars at home and ride bicycles where they want to go. Fewer cars on the road is good for everyone - even for the motorists who are left.

So when I - be it as a person, the creator of this site, or a member of the Connecticut Bicycle and Pedestrian Advisory Board - talk about Complete Streets, this is a lot of what it means - and the added safety is a huge part of it.

My hope is that the anger anyone feels about the effects of a collision turns into action addressing the causes. Labeling drivers as homicidal and stirring up anger about them will get you more followers for your 'cycling culture' web site, but it won't do much more than that. Please push your city, your town and your state toward adopting and implementing Complete Streets. And as you do, drive slower - and walk and bike carefully. Thanks for reading and thanks for riding. 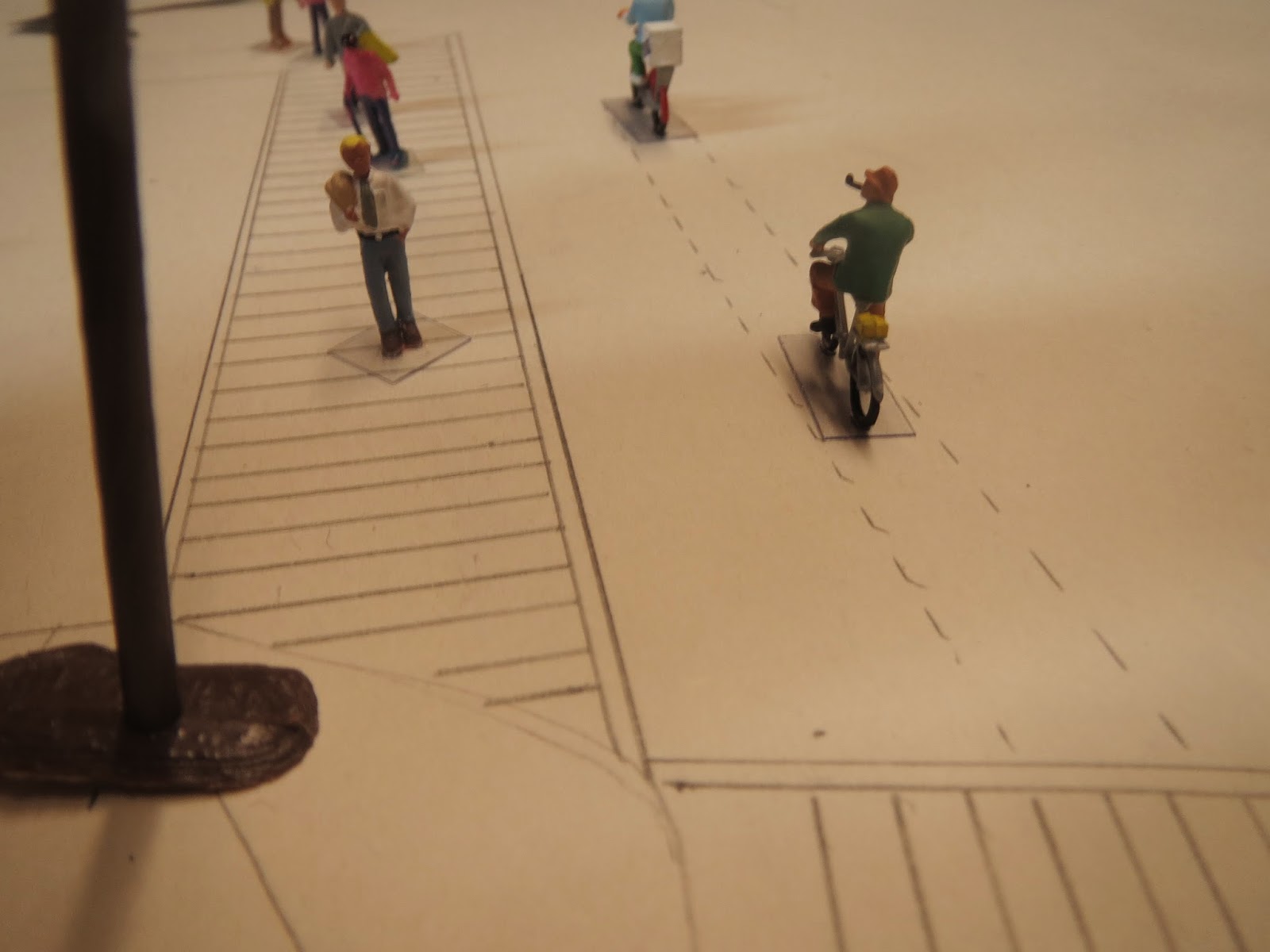