Art and Biking in Maryland, Part I: Frederick 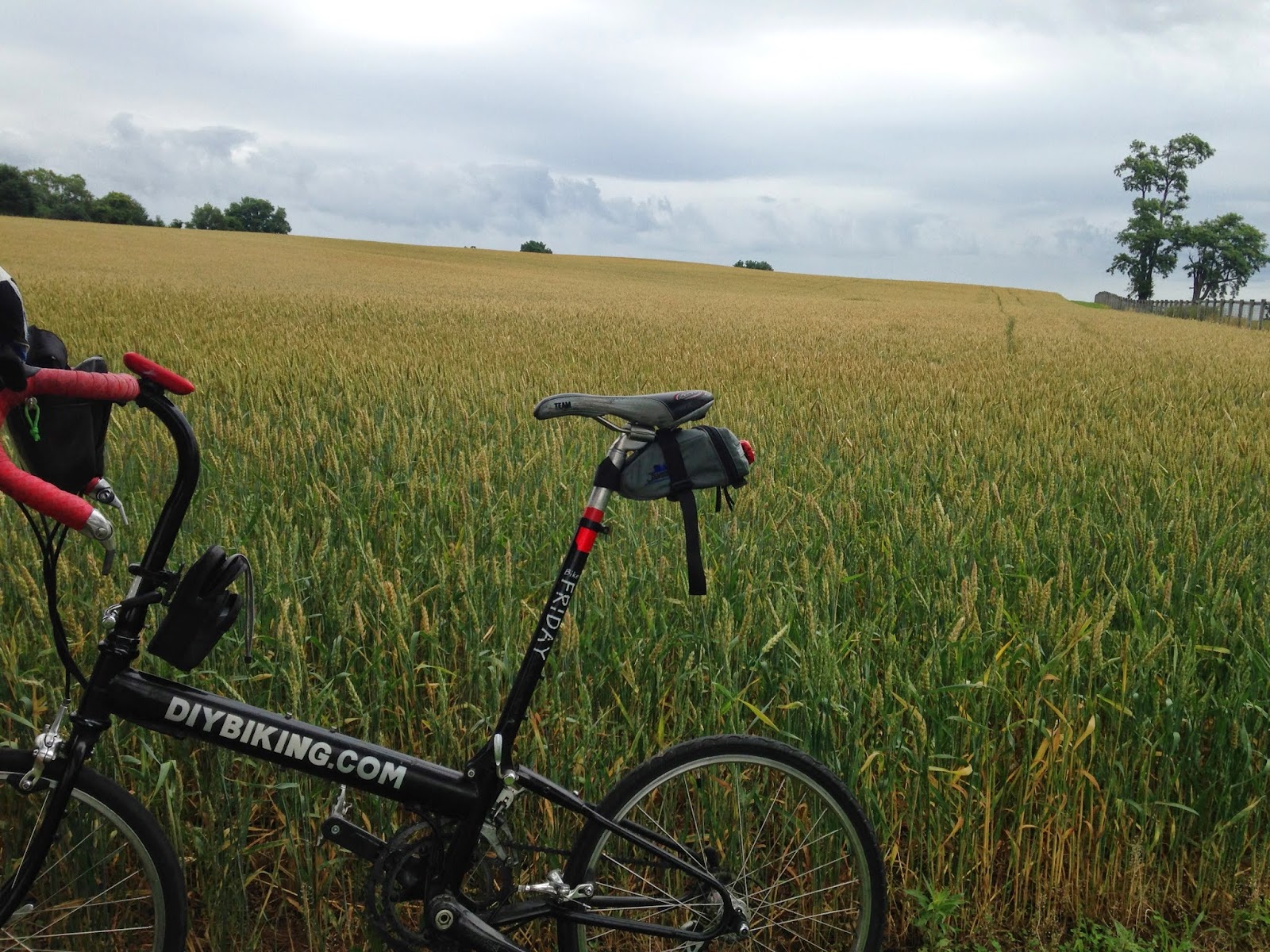 When you're married to an artist, you have a tendency to go to places where people have passionate discussions about pens - and, as I discovered recently, what brand of paper towel is better when painting.*

To get out of these discussions I bike. Cycling trips to Monterrey, Lisbon, Barcelona and the Dominican Republic are among the happy byproducts of my wife's desire to mingle with other artists and improve her own technique.  While she paints, I ride - and afterwards I tell her friends where I had gone during the day (mostly to keep the conversation from drifting back to pens).

Two recent painting events took us to Maryland. The first was Easels in Frederick, which has what's known as a Quick Draw event. That's where artists get together and draw - or, rather, paint - something in the town in a set amount of time and then try to sell it afterward.

In Frederick, we stayed at 10 Clarke Place - a very comfortable bed & breakfast not far from downtown. It had the kind of parlor that made me want to have a handlebar mustache and smoke a pipe while discussing the virtues of investing in railroads. 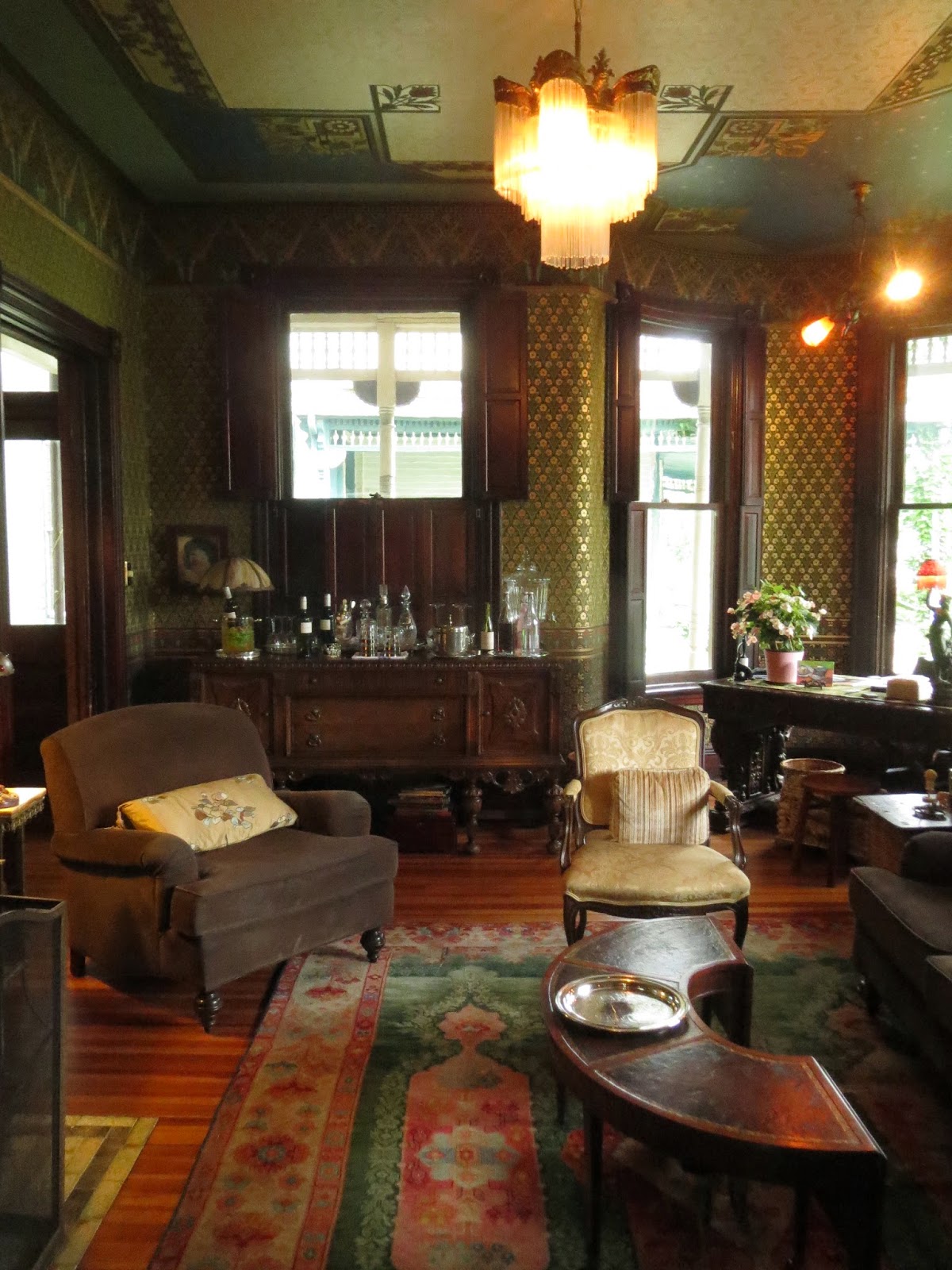 And the downtown has some nice features - and plenty of areas that are pedestrian friendly and car-free. 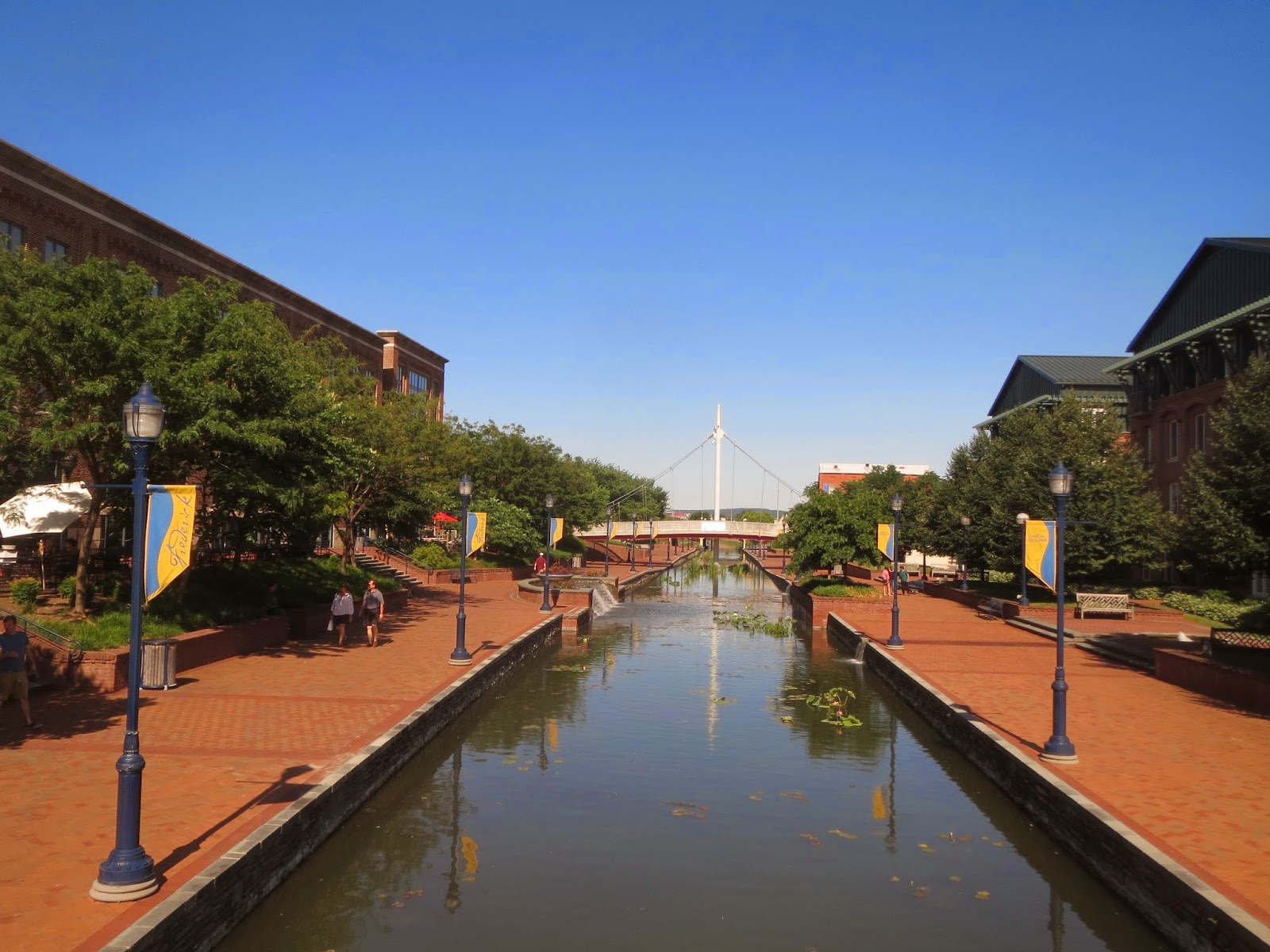 Another great part of downtown Frederick is the bike shop Wheel Base. I had a nice conversation with some of the workers there - but later I would regret not asking about good road rides or even taking some literature that was by the door. 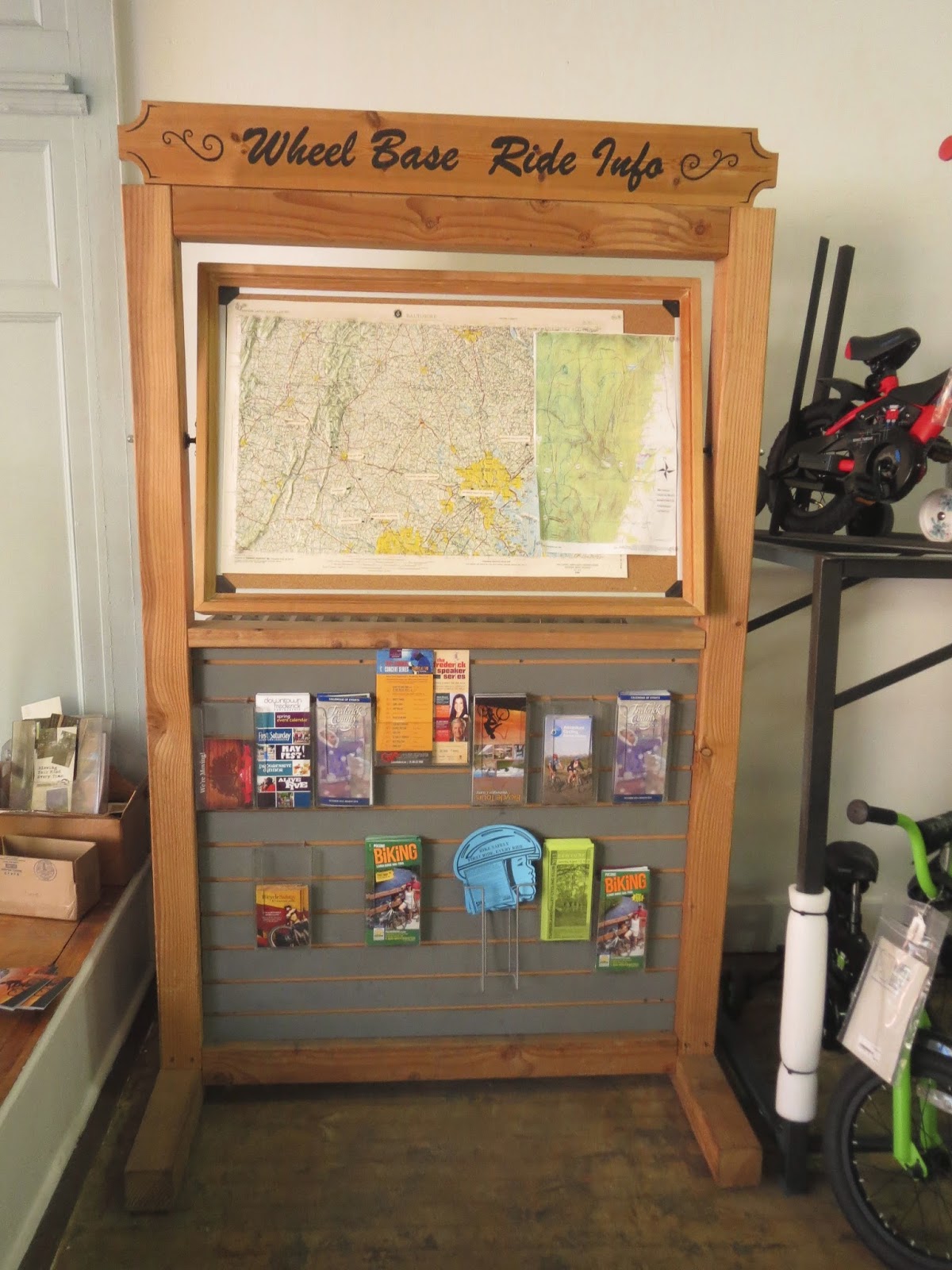 After a good night's sleep at 10 Clarke Place, we enjoyed a great breakfast and the company of the charismatic innkeeper before setting off for downtown.  I felt fueled and ready for my ride, which was to take place during the quick draw. To my dismay, I realized I left my bike shoes in Stamford, which meant I'd have to use sneakers and not ride 'clipped in.'

First, we moved the car near where my wife would be with her easel. This is important because we'd have to transport the framed work to where it would (hopefully) be sold during the show - and we were both worried about the rain. However, she planned ahead and found a spot under a movie theater marquee to set up her easel. 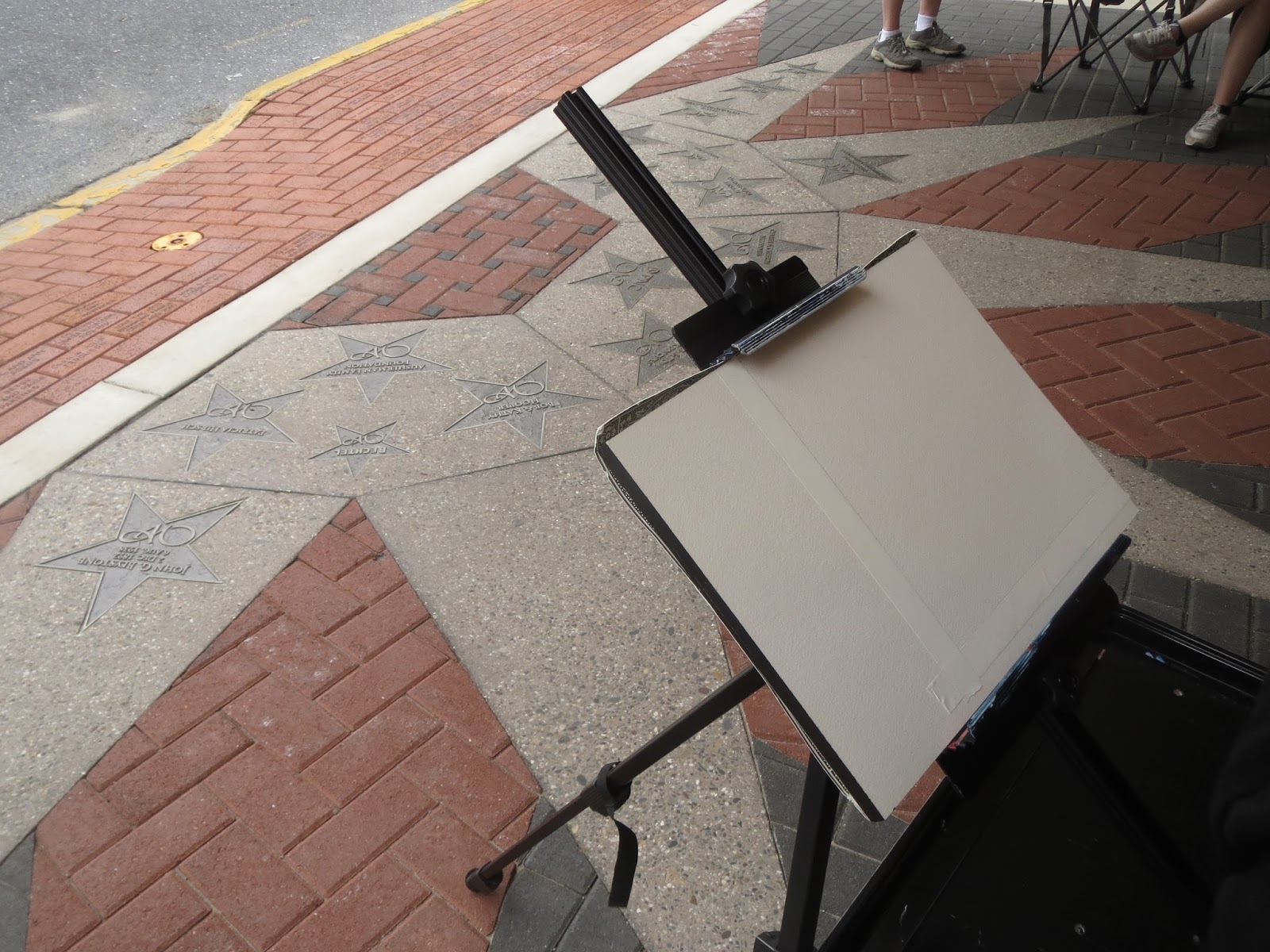 Before the bell rang to mark when the two-hour time period would begin, I set off on my ride in Frederick. Immediately, I realized how committed the town is to the Quick Draw, as they had thoughtfully banished cars from the area. After all, nothing spoils a perfectly good painting like a Kia. 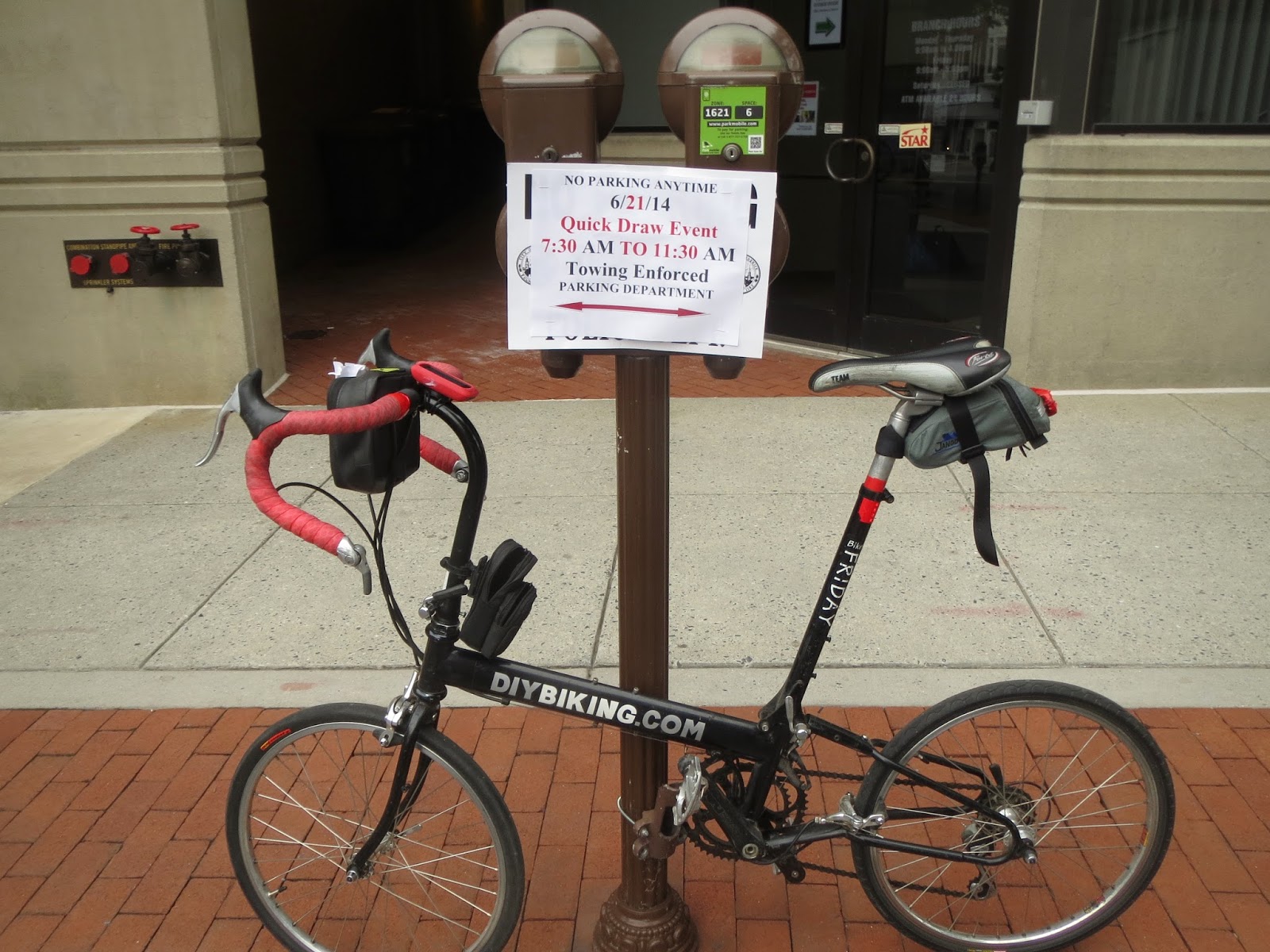 Actually, nothing spoils a perfectly good road, parking spot, or garage like a Kia.

But back to the ride. After a few miles of riding away from downtown, I came to a road that looked like this. 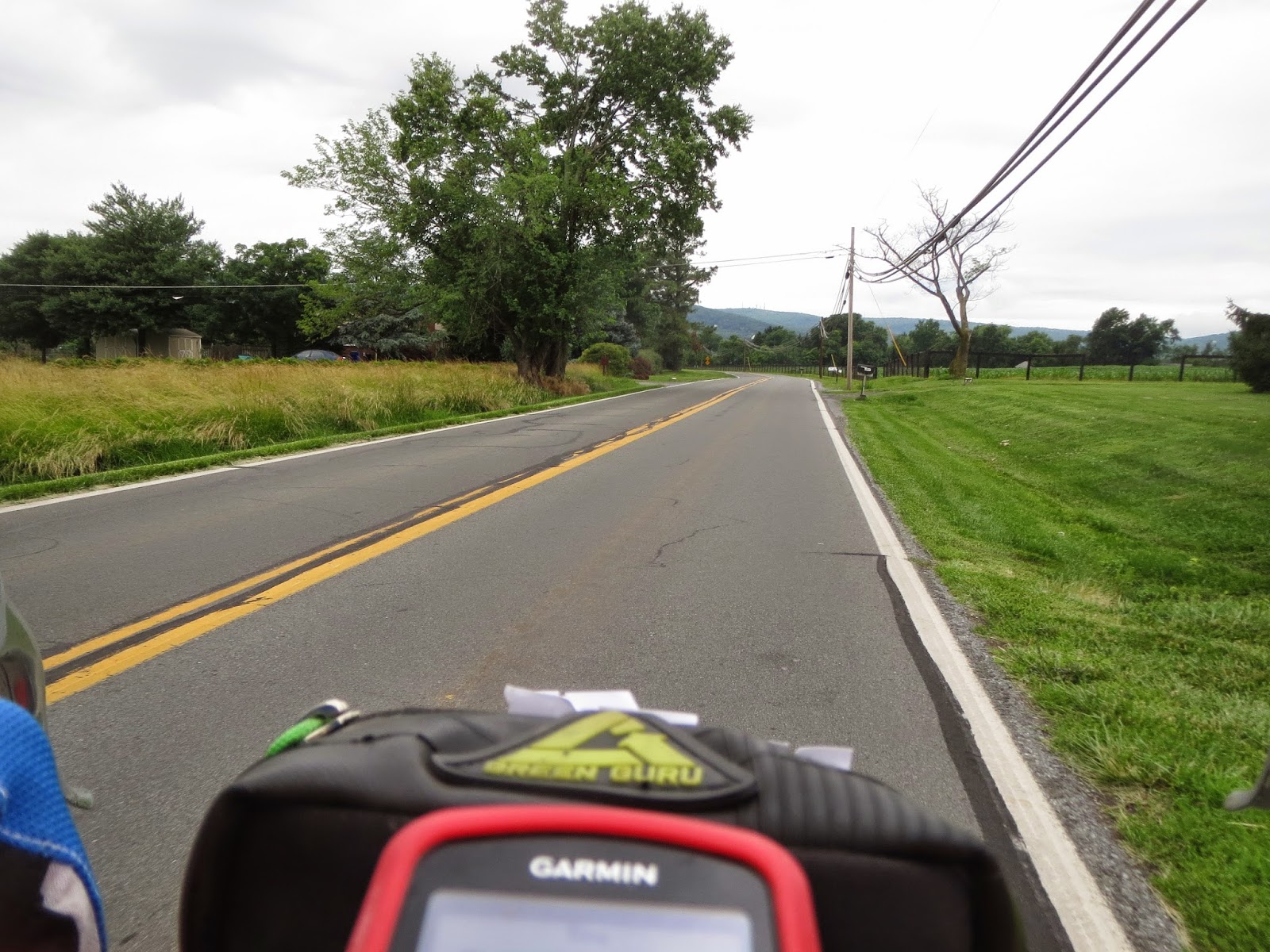 Even though I found the drivers to be rather patient, this road did make me miss ones that have a bigger shoulder. It was hard to get into The Zone when being overtaken every couple of minutes. Also not having bike shoes was messing with me.

It was here I discovered another thing I didn't care for in this part of Maryland: hills. 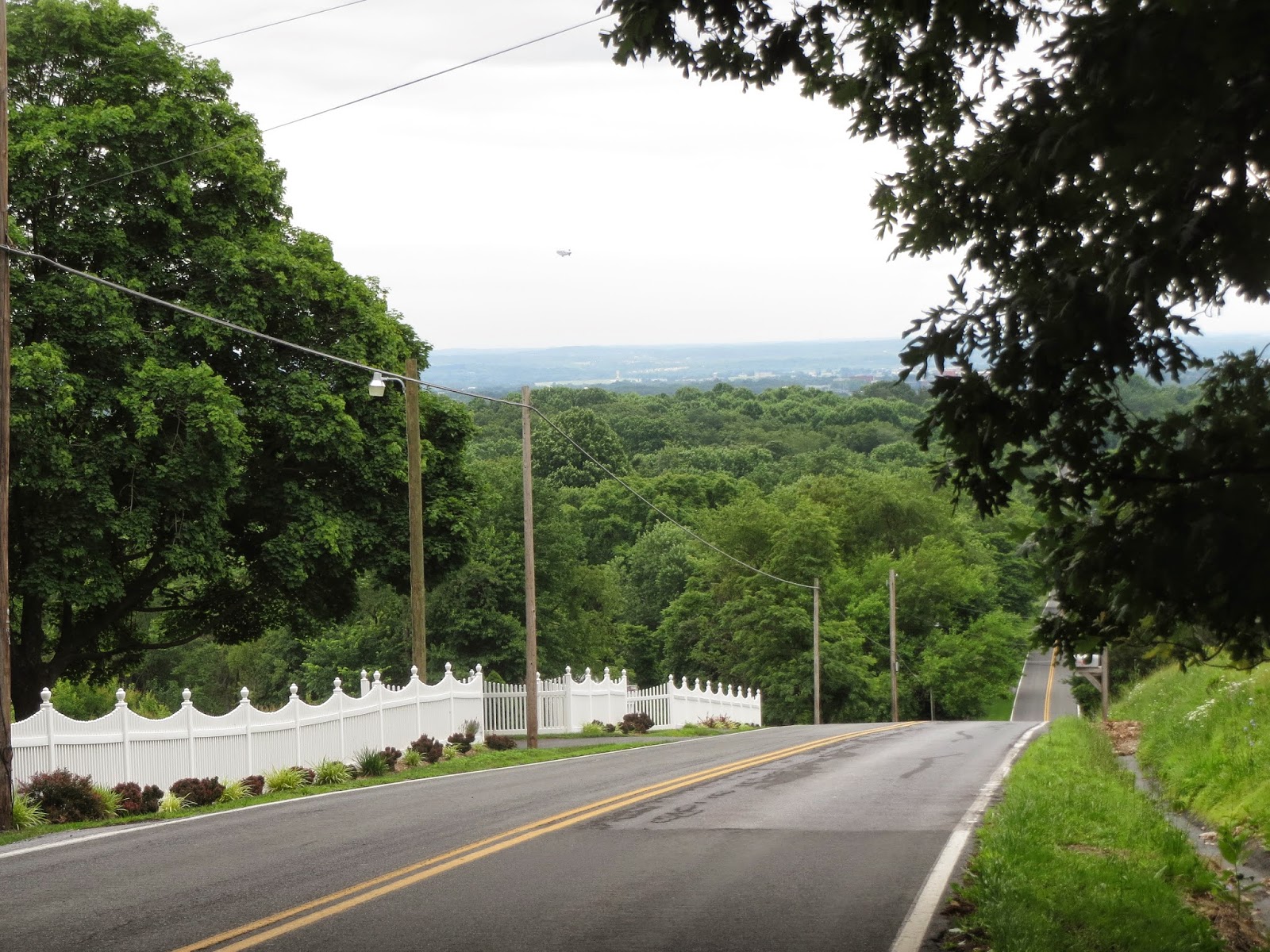 These aren't the hills I'm used to. Some cyclists would insist on calling them rolling hills. But here's a fun fact: rolling hills don't exist.  Rolling hills are the clean coal of cycling terrain. During some bike club marketing meeting long ago, a thought struck someone.

Reaching 45 miles per hour on the downhill wasn't much consolation for the thigh-burning ride required to get to the top - especially when the only payoff was hay bales. 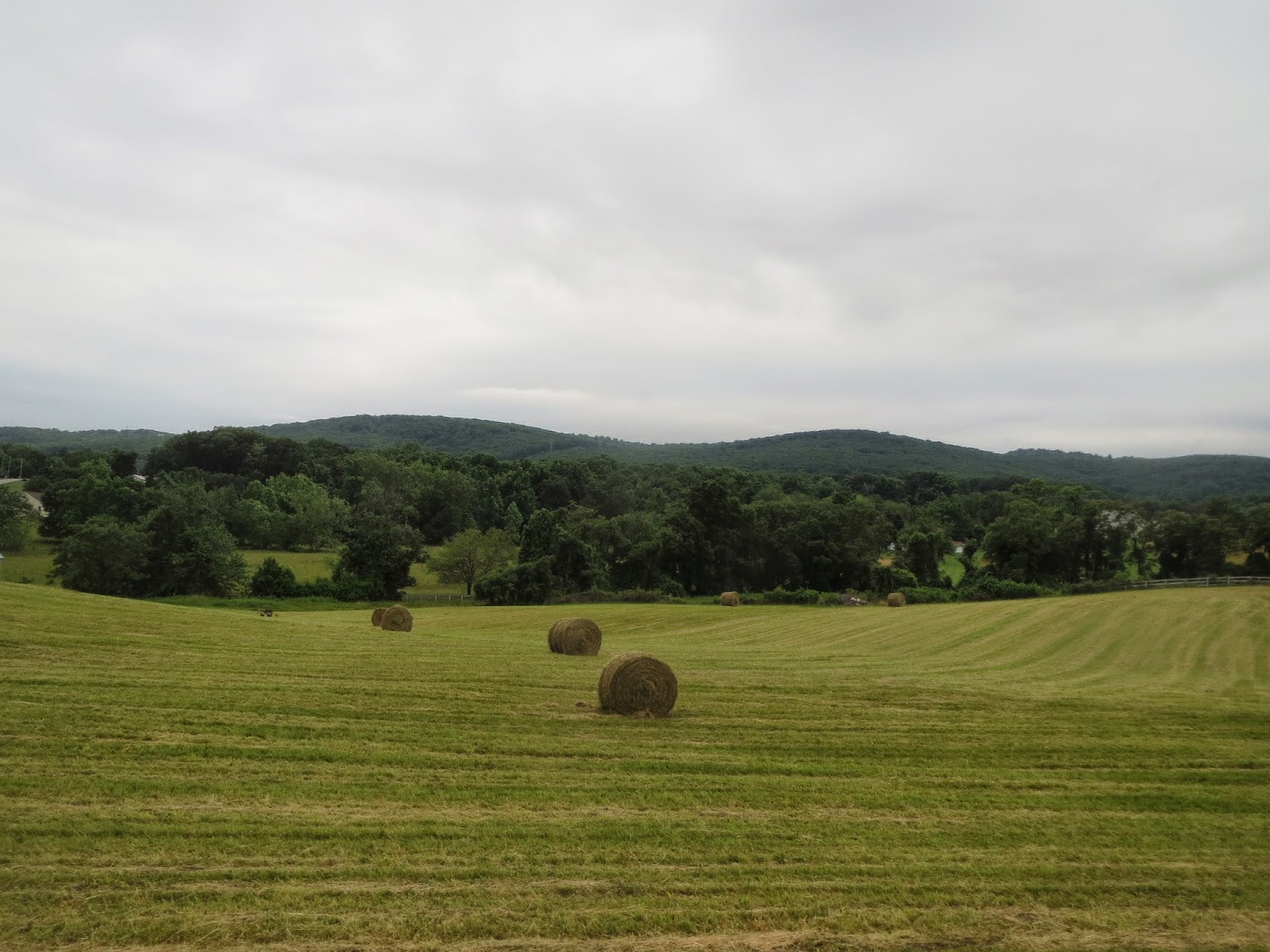 And much to my annoyance: going down the 'rolling' hill brought me almost back to downtown Frederick - and by then I didn't have enough time to ride outbound once again, so I resigned myself to riding in a few circles trying to find historic covered bridges. This was another thing I could have planned better, for this is all I managed to find: 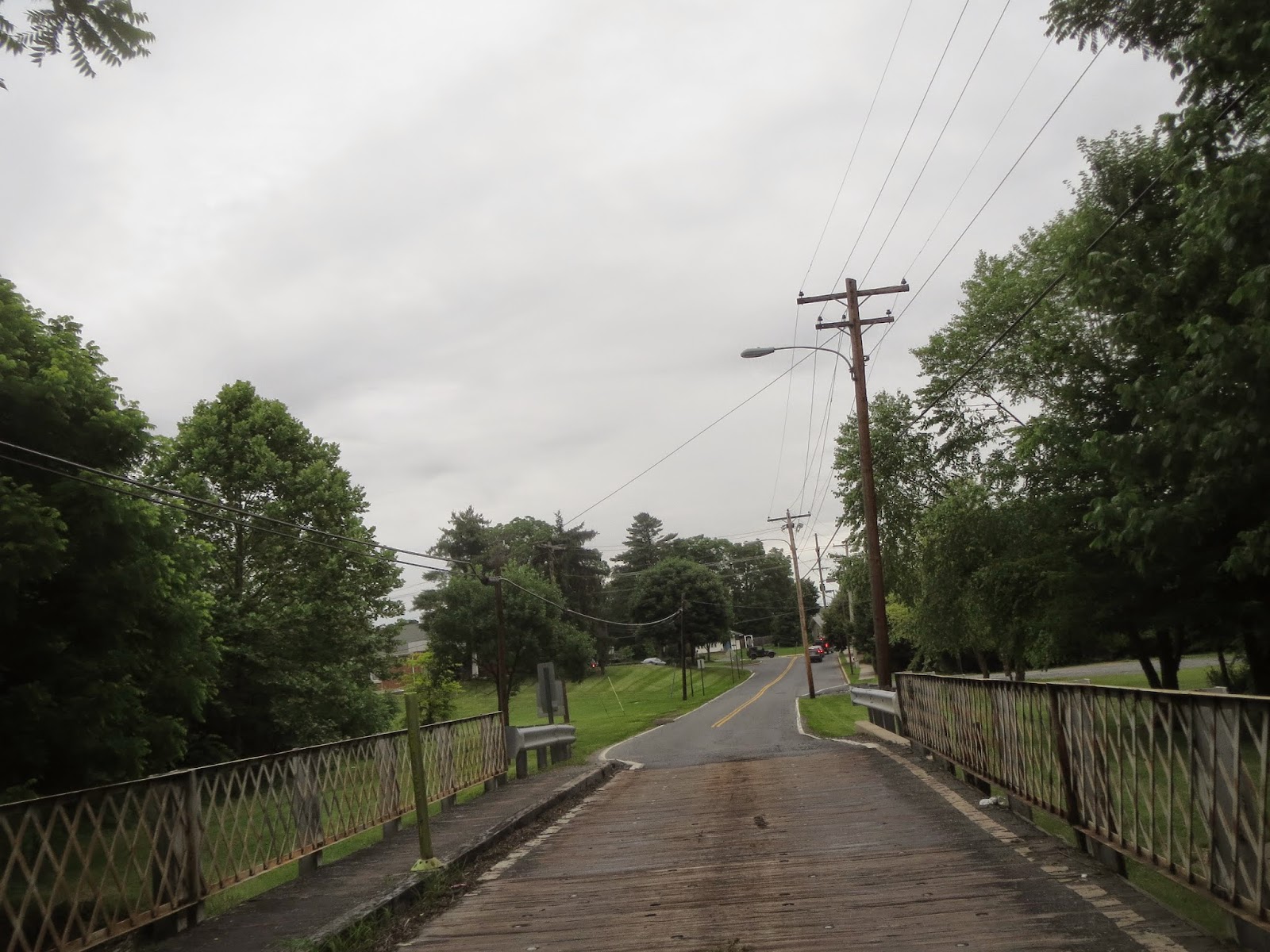 It isn't covered, but it is a bridge. There's wood. It made a cool noise when I rode across it. Clint Eastwood wouldn't flirt with Meryl Streep on this bridge, but it would have to do.

By the time I put away the bike and met my wife, it had started to rain - and we quickly framed her work and drove it to the event - forced inside due to the weather. 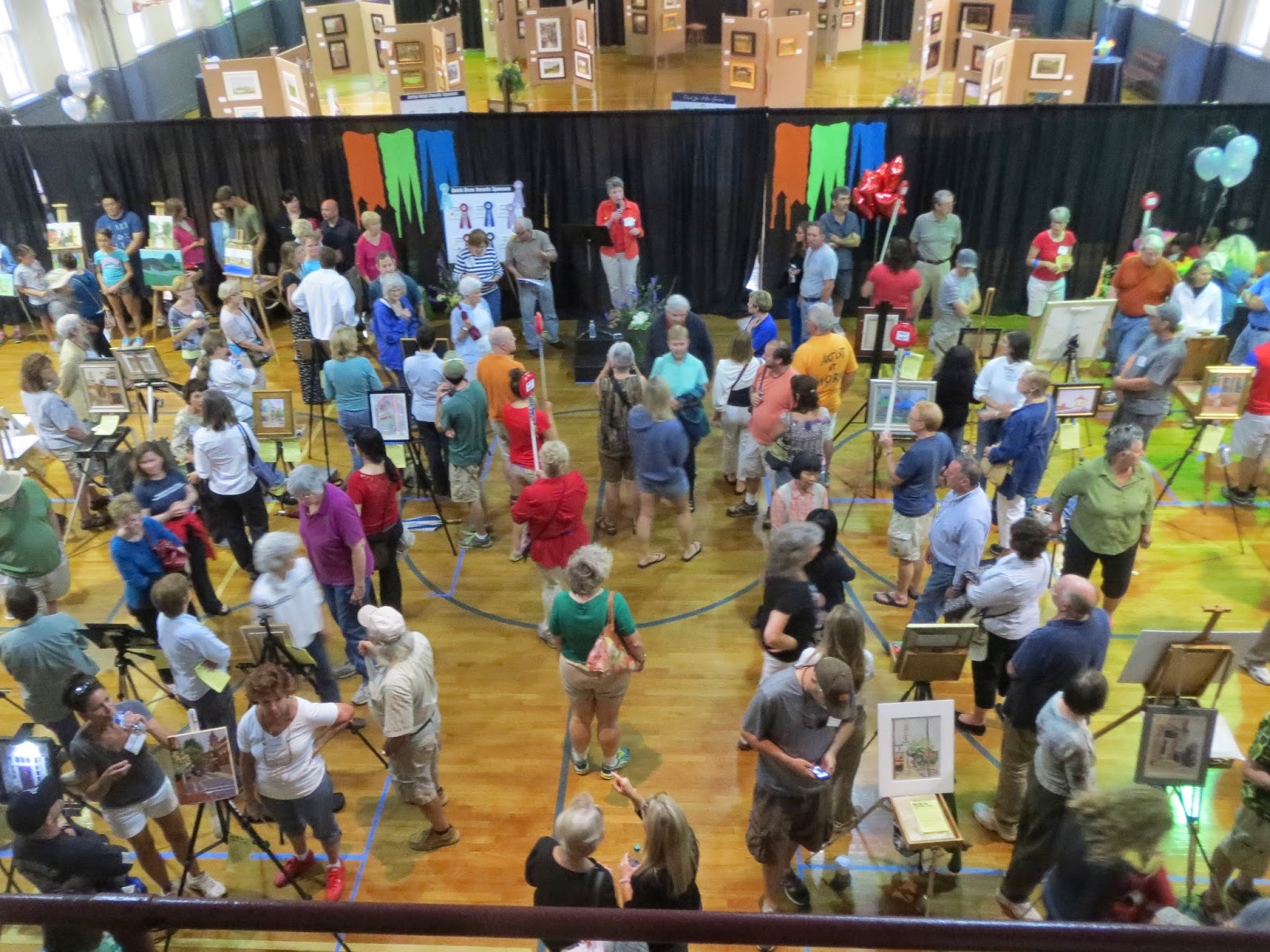 I got over my less-than-ideal ride as the show went on. I knew I'd have to give Frederick - and Maryland - a second chance. The weather wasn't great, the window of time wasn't as big as I would have liked, I forgot my bike shoes - a lot went wrong. But we enjoyed our stay at 10 Clarke Place…and my wife sold her painting, which gave us both big smiles.

Not only that, but there was some serious talent on display at Easels in Frederick, like this work from artist Frankie Johnson: 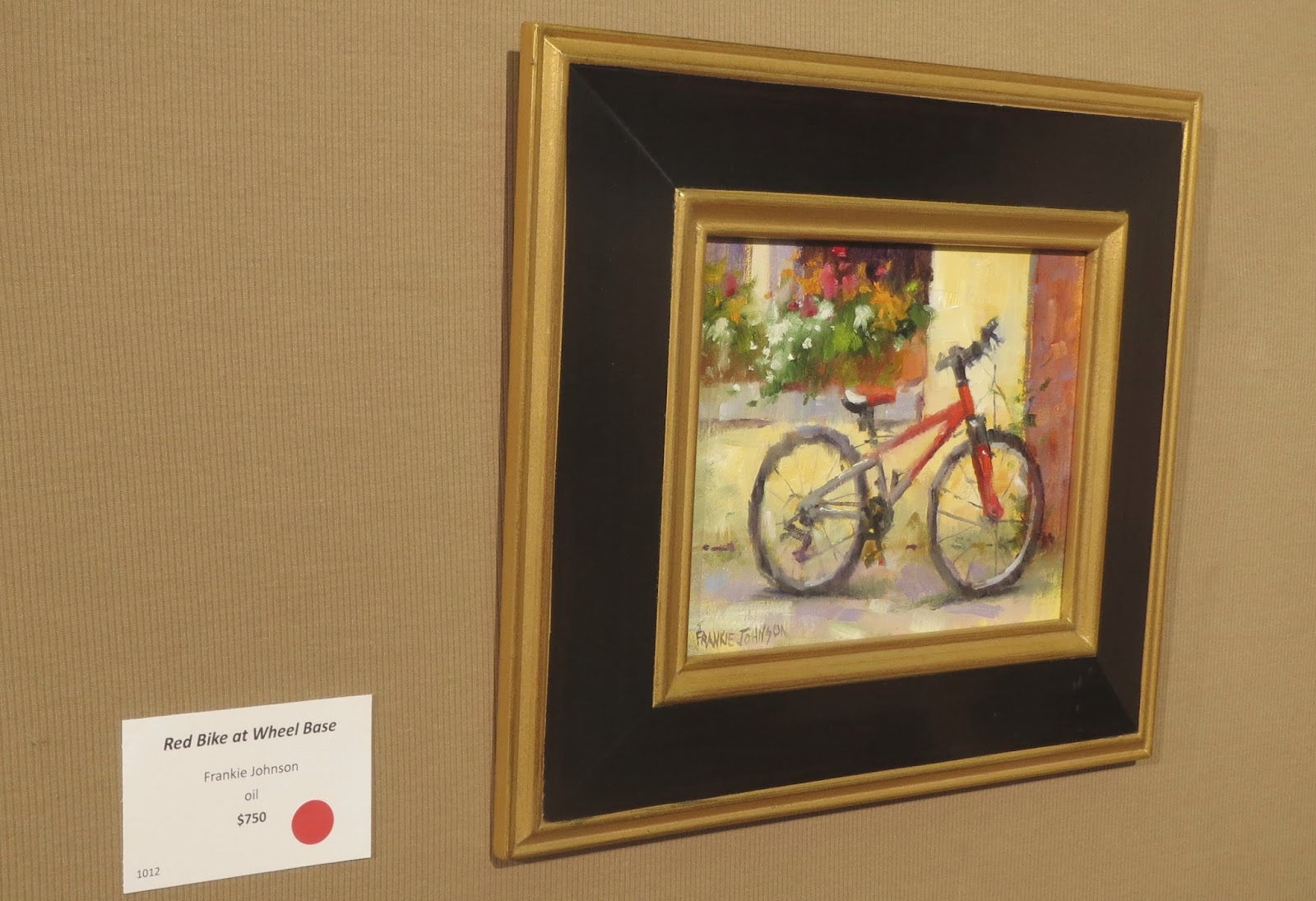 And even though I'd have to wait a year for the next Frederick ride I knew there was another Maryland quick draw event coming up in Easton- and I was determined to succeed where I had failed. Or at least remember to bring my bike shoes. Thanks for reading and thanks for riding.


*This is a real thing among painters. But then again, my cycling brothers and sisters often debate on new wheel sizes and PSI vs. Bar, so I guess each tribe has its own language.
Posted by Mike at 3:33 PM