Okay: for those of you just tuning in - since I was appointed to the Connecticut Bicycle & Pedestrian Advisory Board I've been thinking more about making my hometown of Stamford a better place to ride. As I wasn't sure how to do that, I thought I'd take the issue with the three main candidates running for mayor.

As I'm not sure what I'd ask them about specific infrastructure or how to even start the conversation, I instead have asked each the following: Will you take a one-mile bike ride with me through downtown Stamford during rush hour?

Now while trying to get on the calendar with every one of these candidates I've learned something: it's not easy to get on anyone's schedule when you are talking about people who are campaigning in a city this size. Herding cats while wearing a dog costume is probably an exercise in efficiency and craftsmanship next to trying to talk a busy person you've never met into taking a bike ride with someone they've never met.

But in spite of that difficulty I'm slowing finding islands in the calendar river for the candidates, who are:

Just in case you're wondering: Yes, once again none of the three candidates yet have a page on their sites (yet) devoted to views on transportation issues. Also, I have to spell the party names out because putting an 'r' in parentheses turns Michael Fedele, the candidate I rode with last week into a registered trademark.

Today was a good and long day, which began with a leisure trip on the Bike Friday to New Canaan. Other than the realization the sequester cuts must have reduced the post office's vowel buying budget 40%, it was a fun ride. 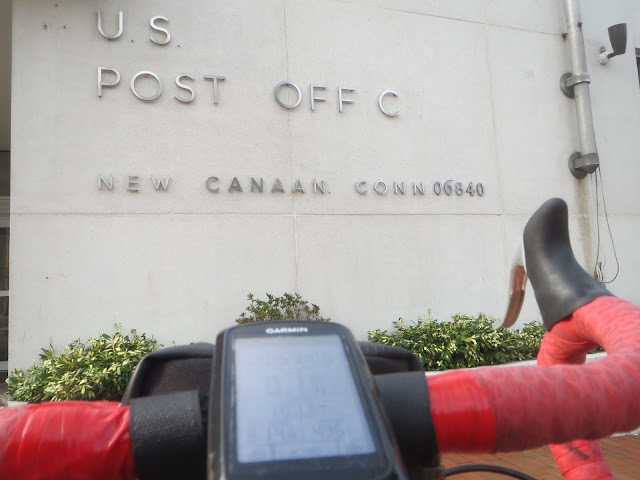 Later, in the afternoon, I once again picked up the office bike for my planned ride with William Tong. The meeting place was once again the Bedford Street Diner. 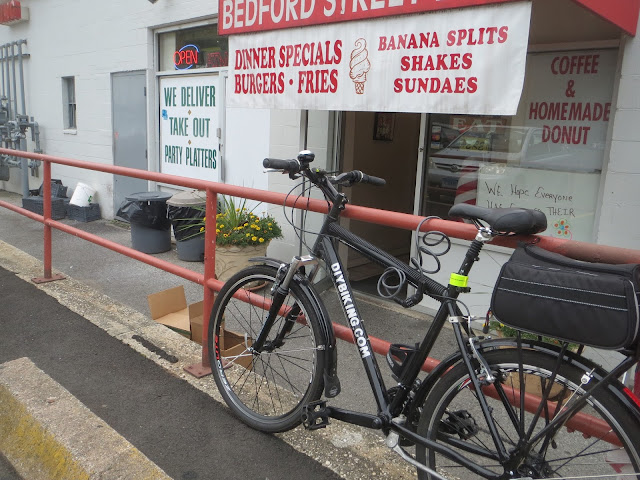 The meeting time was originally going to be 8:00am this past Wednesday but had to be shifted to 4:00pm today. Now for those of you who know how traffic flows in the morning, you have to realize that things are a little different come late afternoon. In the morning you've got volume but people are often sluggish because the coffee hasn't kicked in yet. Late afternoons - and this is a Friday we're talking about here - motorists tend to have more of a 'let's-flee-from-the-Sharknado!' vibe with their driving: the week is over and they want to be home as soon as possible.

I made it the diner on the early side. No donuts in the case, but it was a hot day and so I enjoyed a soft-serve ice cream cone. Yes, I am mindful of the DIYBIKING.COM rules of summer and I am following them. 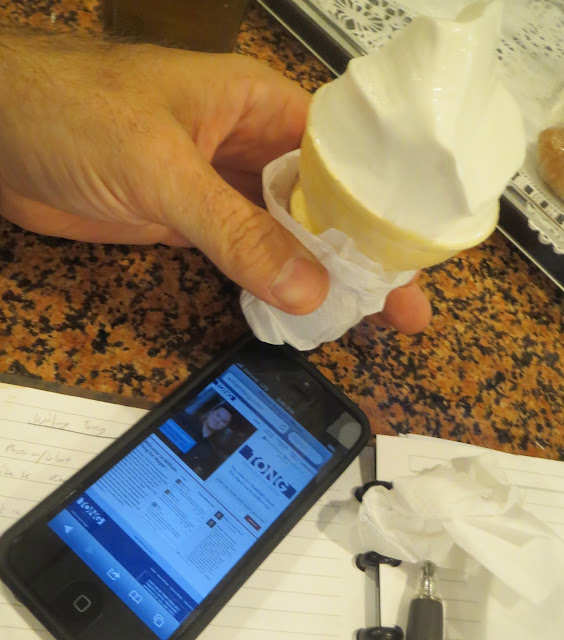 Soon after I finished my ice cream (for the life of me I don't understand why they don't give the option of serving ice cream on one of their donuts) Tong arrived, having brought his bike with him in the back of a gray SUV. Having a gray SUV myself, I was curious and peeked in to notice he didn't have an interior bike rack like mine, but the seats were folded to the floor and the only other thing in the cargo area was a child's seat.

I imagine that between running for mayor and having three kids, all under the age of seven, any kind of riding must be rare, and Tong himself confirmed that while he is a recreational rider he hasn't ridden in a while. Still, the bike he brought was his own nine-year-old eBay purchase and was unremarkable save for the kid's seat bracket on the top tube (for the seats that allow the child to face forward).

When he was a kid, Tong remembers that his first bike was a red Raleigh his uncle had given him for Christmas one year, and for a time when he lived in Providence Rhode Island he enjoyed feeling the wind and the freedom of cycling there. I personally recommended the Providence to Bristol East Bay Bike Path for him and his entire family, and he said he had ridden it himself long ago, but it didn't extend from Providence to Bristol at the time. 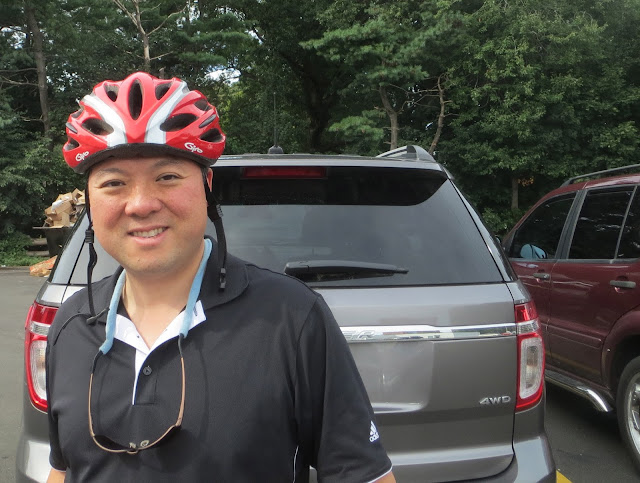 After comparing bikes and talking a little more (as it turned out we were both born in Connecticut and had returned to live in Stamford after a Nutmeg State hiatus; he moved here in 2000, me in 2004) we set off. Dru, the photographer from the Stamford Advocate, did not ride with us so William and myself navigated the streets on our own while she intercepted us with her car.

As I had done with Michael Fedele, we went up Bedford, took a left on Oak, a left on Summer, and a right on Broad and a left on Washington. 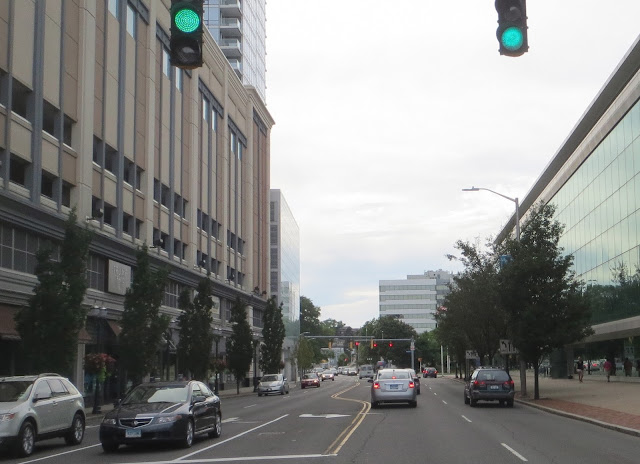 As expected, the traffic showed a degree of urgency that isn't there in the morning. Save for a rogue green Subaru that we both agreed came excessively close to us we had no real close calls and arrived safely at 888 Washington Boulevard.

We continued our conversation in front of the building, and I attempted to use words to convey the need for bicycle infrastructure in the city. The ride, of course, had done a lot of the talking. Still, I wished I had told him about my earlier experience this same day when I rode to AutoZone: With no options, I had to lock my bike to one of those three-foot tall plastic ashtrays by threading the cable through the opening the butts go in (hashtag: 'Ewwwwwww'). How do we encourage businesses to get bike racks and put them right in front where people can see them easily? Stamford downtown? Should we do something with an old shipping container like what Cleveland has near Nano Brew? 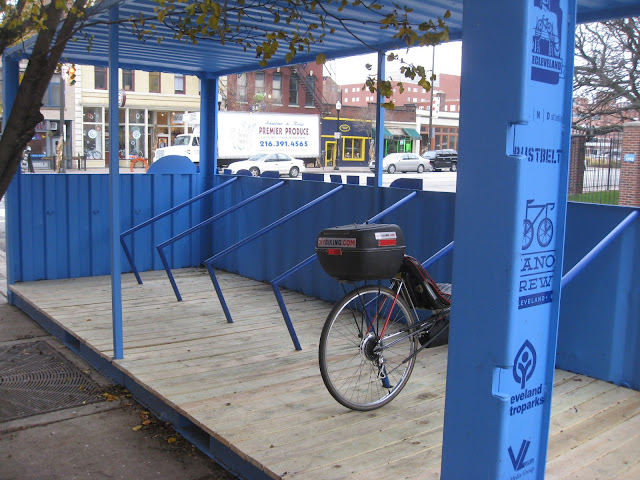 All complicated questions (save for the last one, which for me would be a 'yes' in all uppercase) that would have to wait for long after our ride.

Needing to return to his car, it was William's idea to ride through the Mill River Park.  Having ridden through it myself only once I enjoyed the small extension of this worthwhile ride. 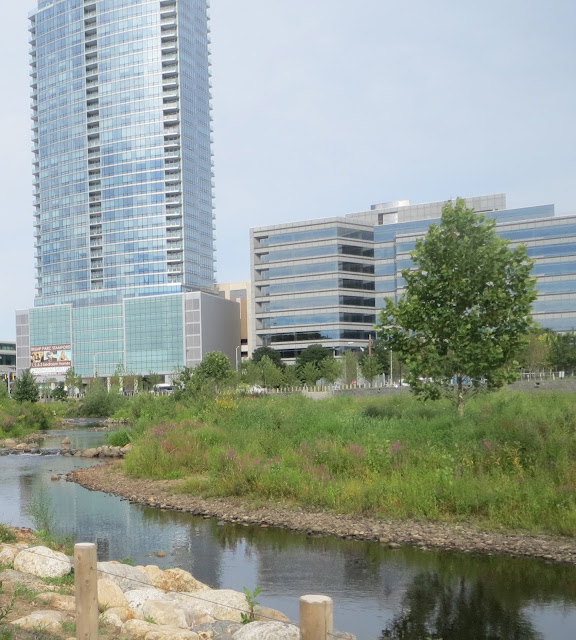 Back at the diner, I thanked William Tong as profusely as I thanked Michael Fedele and we parted ways - only after I shared my vision of how I wanted 'Cycling with Candidates' to evolve: you know how when people are running for president and in Iowa or something they have to eat fried fatty foods? I want this ride to be the fried fatty food of municipal elections: whether you enjoy it or not, you have to be seen taking part - if for no other reason the world needs more pictures of leaders with bicycles.

Also: making it easier for someone to walk or ride in a city is a way to measure a city's progress. Hopefully by the time the 2017 Stamford mayoral election comes up and if my health is still intact, that ride will feel different. Thanks for reading, thanks for riding - and do a lot of both before this summer ends.
Posted by Mike at 8:28 PM