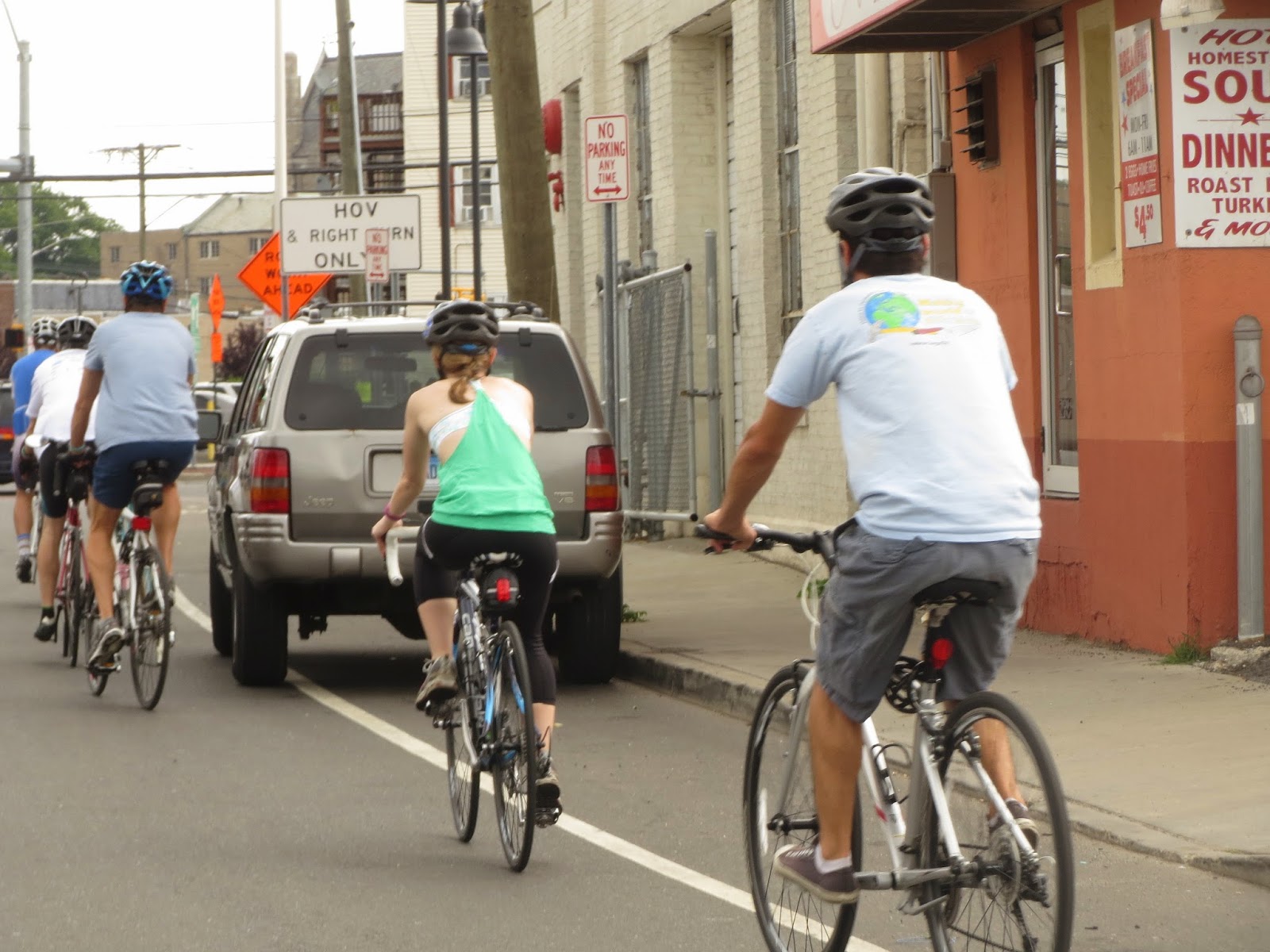 Cyclists in Stamford steering out of one of the few bike lanes in the city to avoid an illegally parked car on Jefferson Street, Aug. 2014

Today, I attended the CCIA's transportation forum to hear Governor Dan Malloy and his Republican opponent Tom Foley speak about their visions for the state. In doing so, I felt as though I was in the middle panel of a Dilbert comic strip.

The reason is because the forum was held in North Haven, which is about ten miles from the closest Metro North station. The road the hotel was on had no bike lanes, sharrows, or share the road signs to be seen. It took place during a time of day when bikes are not allowed on Metro North. And directions on the invitation said I could get there from two roadways where cyclists are not permitted to travel: "Exit 12 off I-91 or Exit 63 off Wilbur Cross/Merritt Parkway (Rt. 15)".

Note the use of the word "or" as if nobody could possibly, possibly fathom anyone getting there any other way but with a car.

So right out of the gate I was unhappy with this forum. I wanted to take an early train and ride there - possibly with the Dahon Matrix - but neither of the two New Haven bound trains would have worked (in unrelated news: remember the Metro North bike racks I tested years ago? They're finally rolling some out…but they can't be used during peak hours).

Unhappily, I chose to drive. Sorry, WTNH's Teresa DuFour: if there was a traffic problem on I-95 or I-91 today, I was part of the problem.

After I arrived and parked my Honda Element, my unhappiness deepened as none of the questions, responses, or opening statements from either candidate made a mention of the value of cycling. I was also appalled that Tom Foley made a point to remind everyone how awful traffic is, particularly in Fairfield County, but twice said something along the lines of a strategy to "push people out of their cars" probably wasn't going to work.

I really wanted to tell him about the people I've met everywhere who tell me that they want to ride their bike to work, to a friend's house, or to a grocery store but they can't because they don't feel safe. So they do what I did today: they took the car because they felt they had no other choice.

If you feel trapped in your car and want to share your wish for better options to get where you are going, please use the following on Twitter: @TomFoleyCT #pushmeoutofmycar.

As for Governor Malloy, he blew it on a question about how to alleviate the parking problem at train stations. His response should have mentioned that making secure and welcoming bike parking available at train stations and making sure all roads leading to the station have bike lanes and good sidewalks. Station bike parking needs to be improved: the moped-choked Stamford rack isn't cutting it. 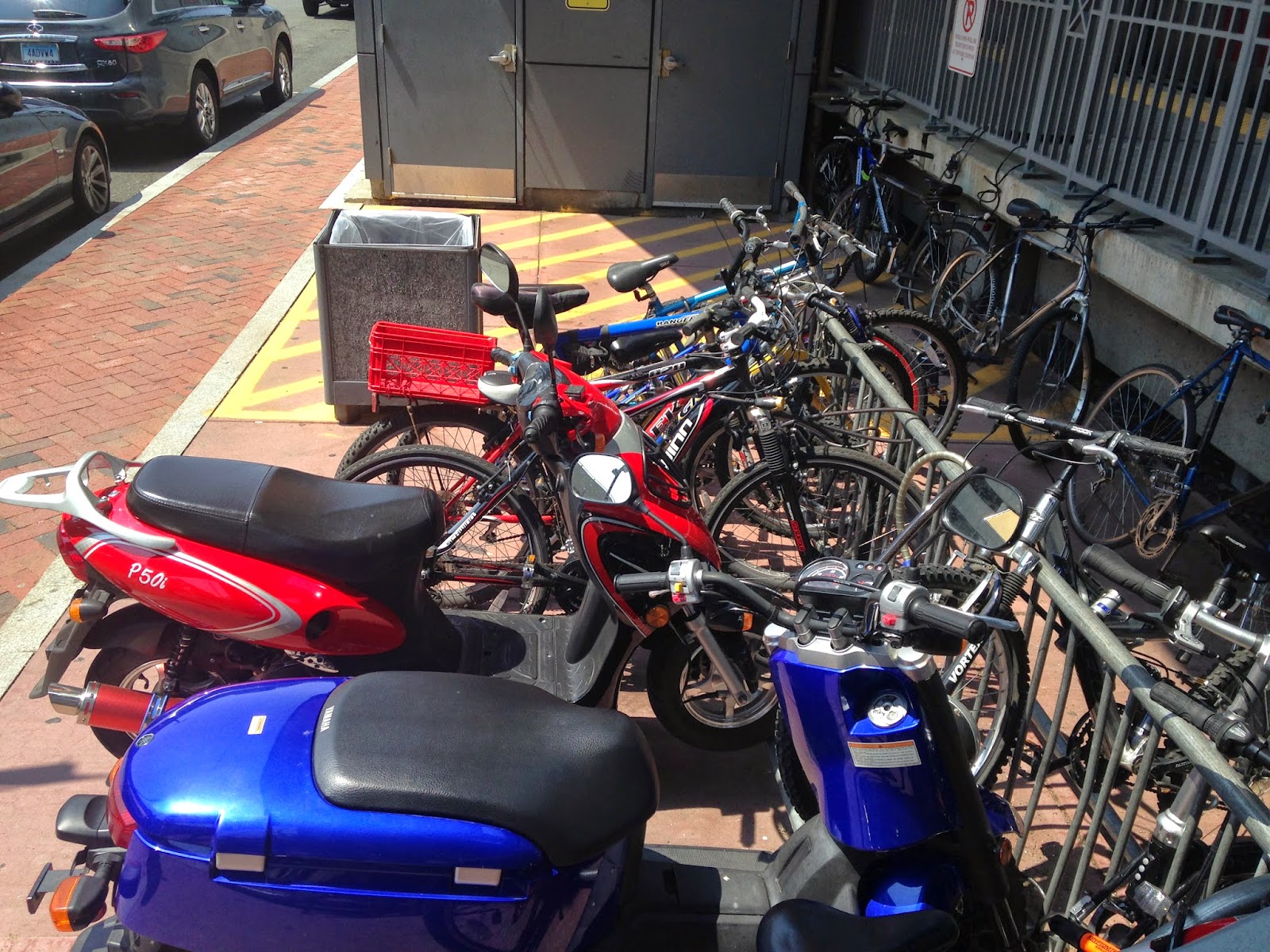 Stamford Metro North station bike rack, along track four. Note the large number of bikes chained to the rail on the far right.


If you have a Connecticut parking nightmare to share on Twitter with Governor Dan Malloy, please use the following: @DanMalloyCT #ctneedsbikeparking.

To get back to Tom Foley's comments: nobody is being pushed out of cars by building bike infrastructure. They are encouraged to get out of the cars on their own and thus give extra automobile spaces to people who really need them, since bikes take up a whole lot less space than cars do. Happy cyclists get to ride, happy motorists find more parking spots. Everybody wins. 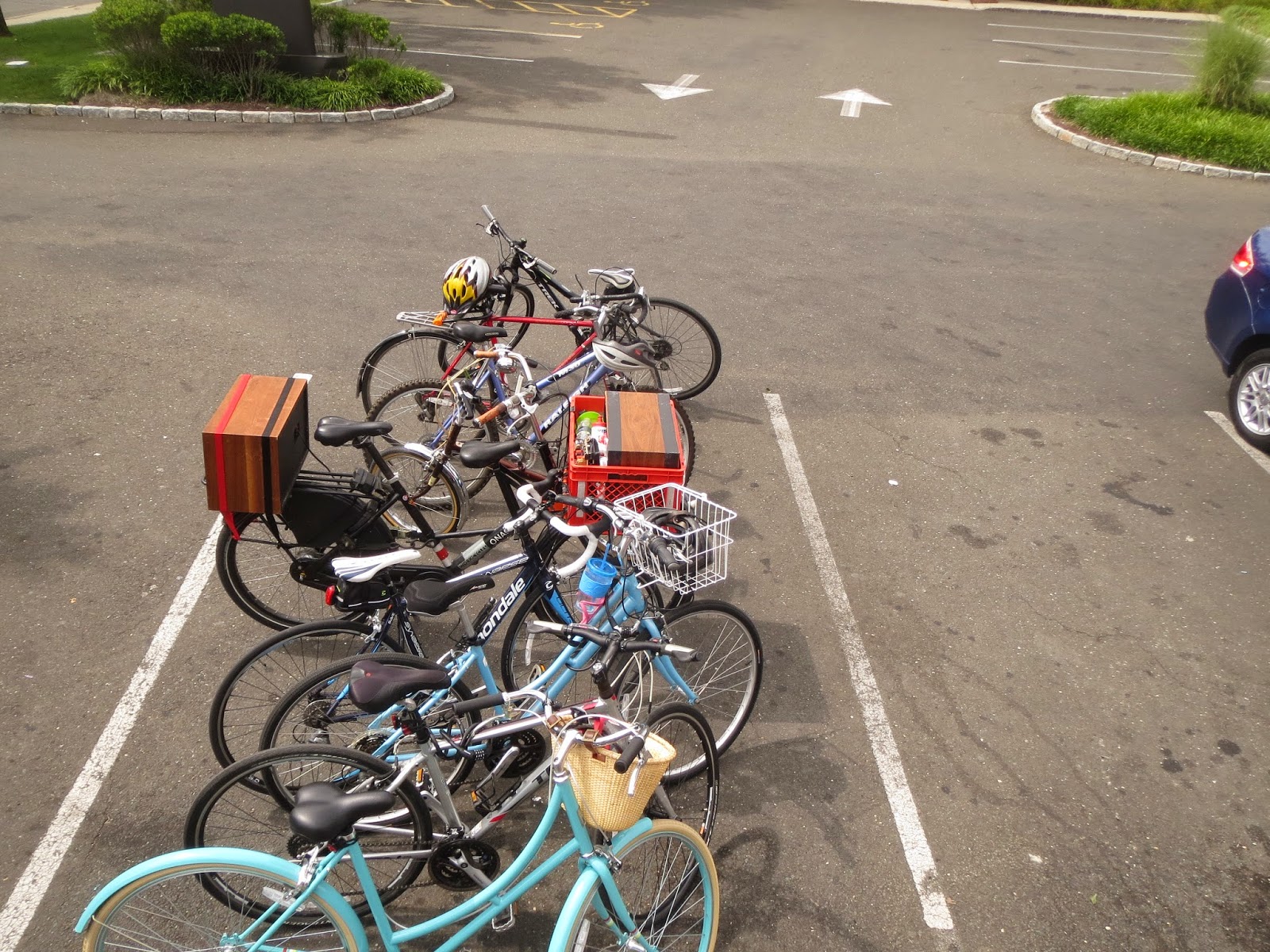 Bikes at Sunny Dae's ice cream shop, Stamford. The cyclists spent just as much on ice cream as motorists and took up less space.

And, as I've said before, it is expensive to add to the supply of parking spaces so we need to all think creatively on ways to reduce the demand.

I hope both candidates think about these things as they continue to travel throughout the state on the campaign trail. And I hope they keep an eye on their inboxes because I am inviting them both to Stamford's Mill River Greenway event on October 11th, sponsored by some great local businesses, and to take a short bike ride with me.

On the way home from the event today, around 1:00 in the afternoon, I got stuck in traffic on I-95. I had put 'home' in the GPS after stopping in New Haven for lunch, and like all GPS devices it shows what time you will reach your destination. I got to watch 20 minutes of my life slip away quietly.

When my car was at a dead stop, I put on the parking brake and opened the door so I could lean out to take the picture below (I wasn't texting and driving) but a couple of motorists nearby probably thought I was pulling an 'Everybody Hurts' from that R.E.M. video. 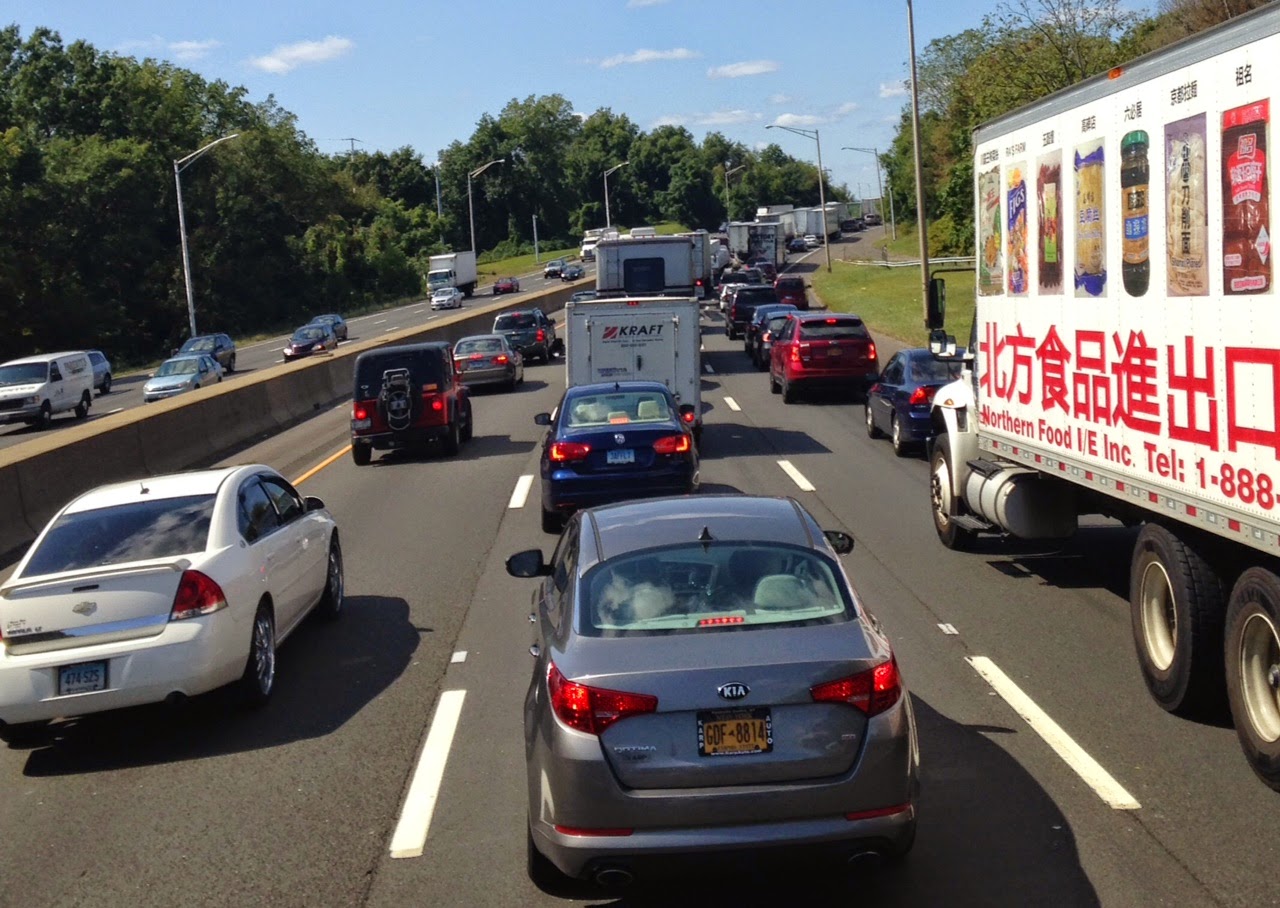 If neither candidate takes cycling issues more seriously - and if we don't work harder to make sure they speak about it -  all we can all hope for is to get used to this view. Thanks for reading and thanks for riding.
Posted by Mike at 8:31 PM