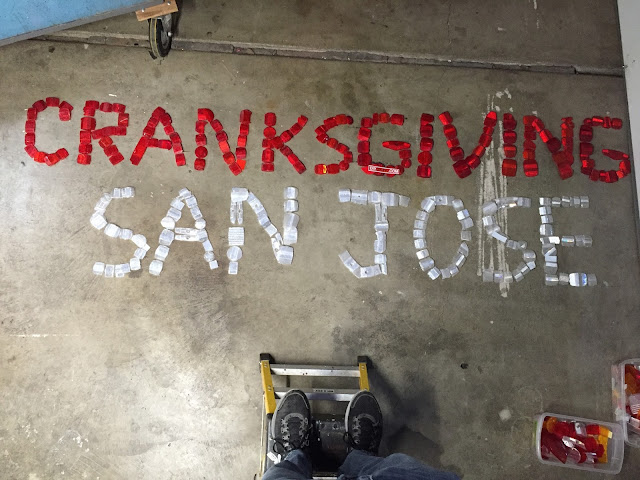 Back when I lived in Stamford, Connecticut (where I owned several bulky winter coats, seeing a Tesla was hey-look-at-that! rare and I had all the plastic grocery bags I could ever dream of) I brought an entire Thanksgiving dinner to a food bank in a bike trailer I made. I called it the DIYBIKING.COM Thanksgiving Dinner Challenge.

It became an annual occurrence for me, and before long People Friendly Stamford got involved. I named it Food Bank Biking, and decreed it would be an annual event done on the Saturday before Thanksgiving. I did it in solidarity with People Friendly Stamford when I was in Cleveland one year. Last year, I loaded up my bike trailer brought food to Second Harvest Food Bank in San Jose. 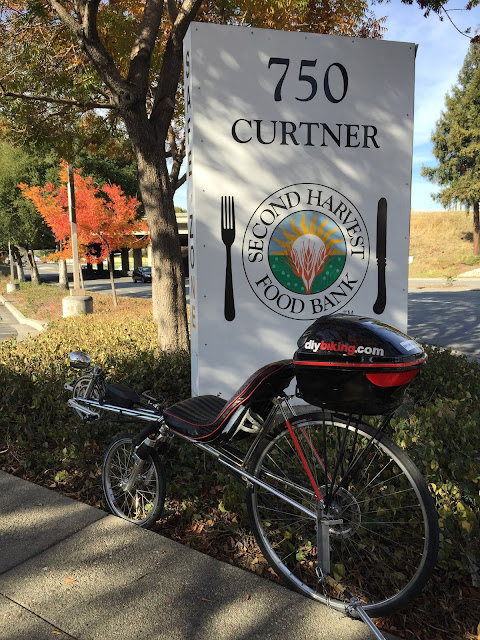 Not long ago, Cain, the founder of Cowgirl Bike Courier in San Jose, invited me out of the blue to a Cranksgiving planning meeting. From the invite, I learned it was a bike-based food drive that would benefit Second Harvest Food Bank.

From the Cranksgiving web site, I learned Cranksgiving had been first founded in New York and been around since 1999 - not only predating #FoodBankBiking by over a dozen years but that meant it started back when I lived in rural New Hampshire (and I weighed 25 pounds more than I do now, ate fast food procured by car several times a week and considered Applebee’s a fancy dinner out). 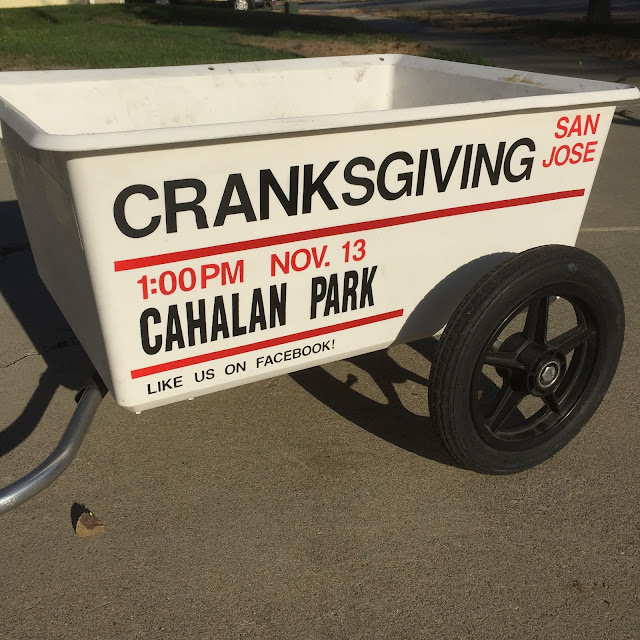 The rules of Cranksgiving can vary from city to city, but the Twitter-ready version of what’s going on in San Jose is this: cyclists get together at Cahalan Park, they are given shopping lists (manifests) of specific food items needed by Second Harvest Food Bank, they go out, lock up at different grocery shops, buy food, and meet back at Hub’s Coffee to weigh it all. 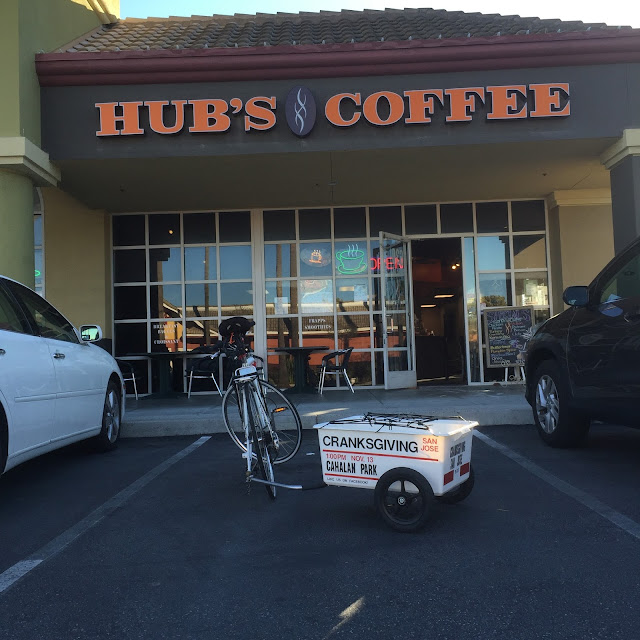 Prizes may be awarded based on the time one finishes (safely - no prizes are given to those who ride recklessly to be the first one back) and other factors - such as the weight of the food they bring back - although the volume of all of the food put together is how everyone will measure the collective victory.

I already know the bike I’m using for this event. 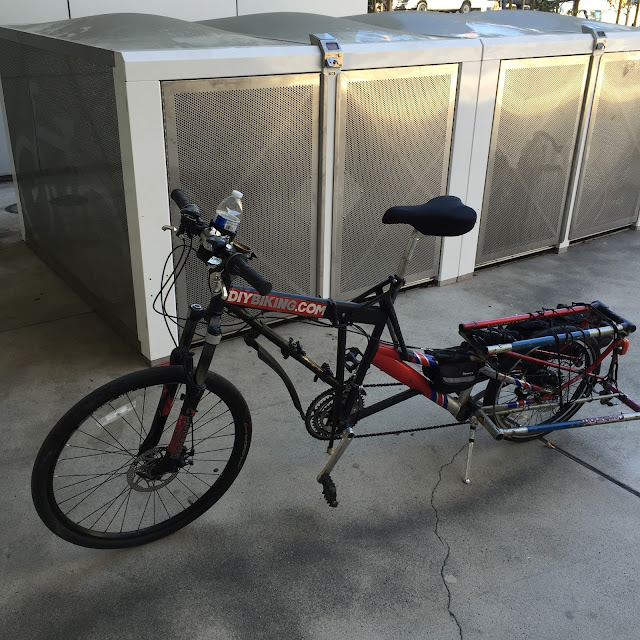 But I’m not only a Cranksgiving participant, I’m also a sponsor.

This is the first year San Jose has done Cranksgiving and I’m doing promotion when and where I can. It happily got me back in touch with Good Karma Bikes (which, by the way, is having a used bike drive tomorrow - between noon and 2pm October 22nd at 460 Lincoln Avenue) who agreed to help sponsor the event too. 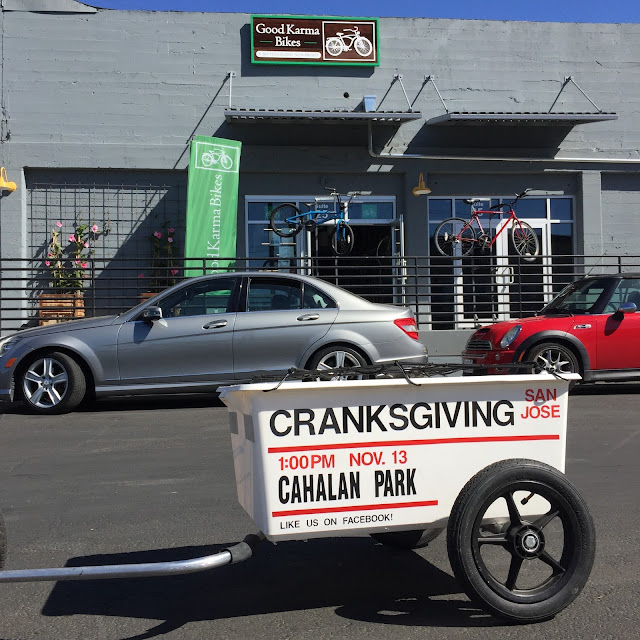 I’ve been to a couple of the Cranskgiving planning meetings already and as time goes on I’m still asking myself a key question that you may be asking yourself as well.

Why didn’t I hear of Cranksgiving before?

I’m not 100% sure, but I have a theory: Cranksgiving, since it originated with bicycle messengers, orbited their galaxy and was shaped by the language of the messenger culture - as evident in the Today Show coverage. And the name Cranksgiving means nothing to the uninitiated. If you’re not a bicycle messenger and are lucky enough to meet one, I imagine your conversation about Cranksgiving would go something like this:

(Pedals off on a fixie)

It isn’t at all unfortunate that cyclists don’t all speak the same language*. But it’s good to get involved with cyclists one doesn’t normally pedal with and for those who are in established biking groups to invite outsiders to come in.

The latter is how I got involved with Cranksgiving - and the only hope for cyclists to expand their global tire print. (again: Thanks, Cain.) 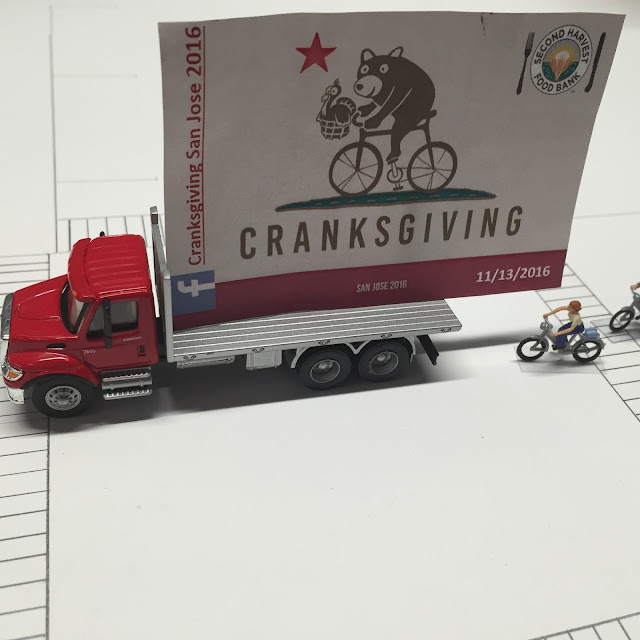 So what I want to do now is insist you should get involved too. There are plenty of good reasons - one of them is you get to focus on something on that doesn’t involve the 2016 Presidential Election. That alone should get you to visit Cranksgiving San Jose’s page to register for the event - which is November 13th at Cahalan Park at 1:00pm. Also, if you live in Silicon Valley and want to help promote the event, like the Cranksgiving San Jose page on Facebook and share it with your friends.

And you - yeah, YOU. Reading this in a faraway city. You usually ride alone but you’re known to show compassion toward others. You know there are hungry people where you live and you want to help them. Visit the Cranksgiving page that shows you how to start one up in your town.

Remember the thirteen words: If you have a bike and can ride it safely, please ride it. If those thirteen words ring true for you, you can take part in Cranksgiving. Thanks for reading and thanks for riding. 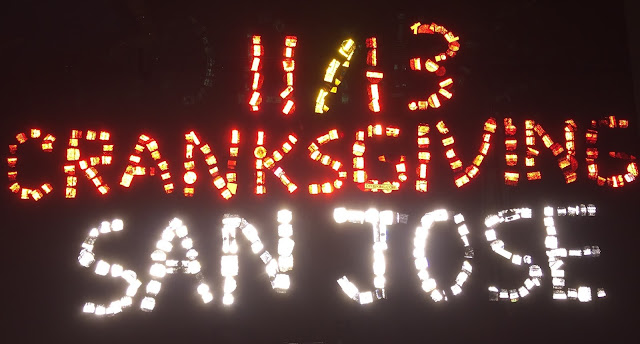 * I found out what an 'Alleycat Race' was about a week after I got confirmation of what 'On Fleek' meant.
Posted by Mike at 1:25 PM