10 Ways to Reduce Traffic Congestion in the Bay Area (No. 4 Will Surprise You)* 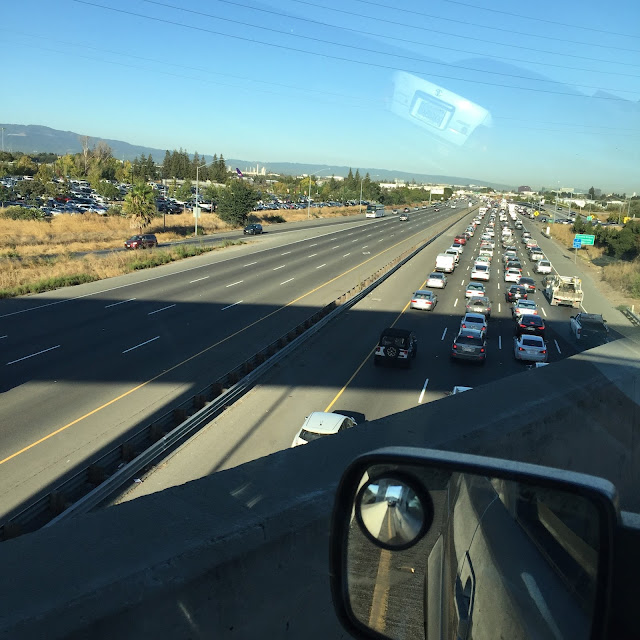 I need to thank the San Jose Mercury News for providing me with inspiration with the click-bait headline Bay Area’s 10 Most Congested Freeways (No. 3 is a Surprise) from yesterday.

So here we go.

Traffic isn’t caused by other people. It is caused by you and me when we choose to get in a car to go somewhere.

That's worth reading again. Traffic isn't caused by other people. It is caused by you and me when we choose to get in a car to go somewhere.

Millennials are a generation with many flaws but they are collectively smart enough to realize that owning a car is pointless and expensive. They bike. They walk. They rideshare. They take the train. Be like millennials. Leave the car.

9. Vote for Measure B

On the ballot next month in Santa Clara County there is a 1/2 cent, 30 year sales tax measure. In my opinion not enough of the money expected to be raised by this very small tax will go to bike and pedestrian infrastructure, but a lot will. The bulk is going to improving a ton of interchanges and expressways around the county, and also fund the completion of the BART extension to San Jose (means fewer motorists and more people taking the train). So read about it and vote for it.

Oh: another reason to vote for it - I am told this is important for Santa Clara County residents - is that this measure will also pay for fixing potholes.

I understand the hatred of potholes, but I lived in New Hampshire for 11 years. You may know a lot of things, Silicon Valley, but you don't know potholes. Go to the Granite State if you want to learn something about potholes. And in one winter new and unwieldy terms will become part of your vocabulary. Like frost heaves.

But they just raised the gas tax. California can too.

This was a theme of the Silicon Valley Bicycle Coalition’s summit back in August. If you really want to get people to drive less and bike more we have to go beyond peppering the landscape with incomplete bike lanes and SHARE THE ROAD signs. Roads need to be designed for bikes and cars together and in such a way the cyclists are protected from cars.

Even if you will never, in a million years, ride a bike to work or to the In-N-Out Burger others will. That means more space on the road for your electric or hybrid car.

6. Kick Electric and Hybrid Cars OUT of the Diamond Lane 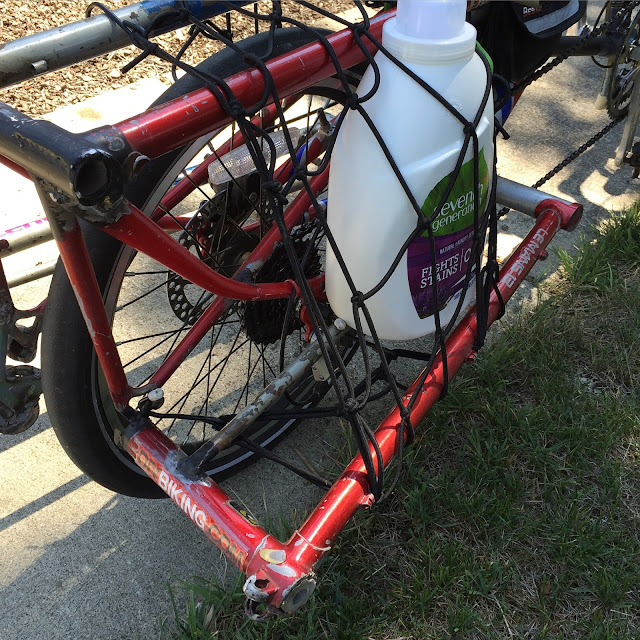 I used my homemade cargo bike made from mostly thrown away bike parts to pick up environmentally-friendly detergent. How did you pick up your detergent? Your Chevy Volt? How environmentally friendly of you!

Showering environmental praise and pouring weird benefits on hybrid and electric car owners (such as giving solo drivers of such cars access to the diamond lane) is also not good for the environment.

And it slows everyone down. Peel off those damn ‘Access OK’ sticker/trophies and get in the middle lane where you belong or bring a passenger.

In the interest of full disclosure: I own a ten year old gas-powered four wheel drive SUV. But I am better for the environment than some of the irate Smugmobile owners reading this post since I rarely use it for any trips within four miles of home. Let’s stop issuing merit badges to everyone who can afford to spend money on the newest hybrid or all-electric wonder and put that money towards bike, pedestrian and mass transit projects instead.

5. Get rid of parking minimums 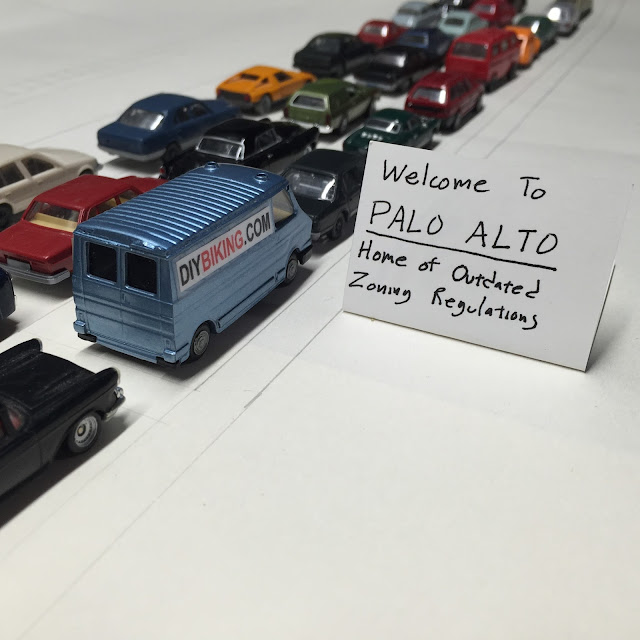 The San Jose Mercury News talked about the horror of parking minimums quite well in a recent story about Palo Alto. Also, the organization Strong Towns is bringing the conversation about parking minimums into the mainstream too. If we enable car parking, we get car traffic. 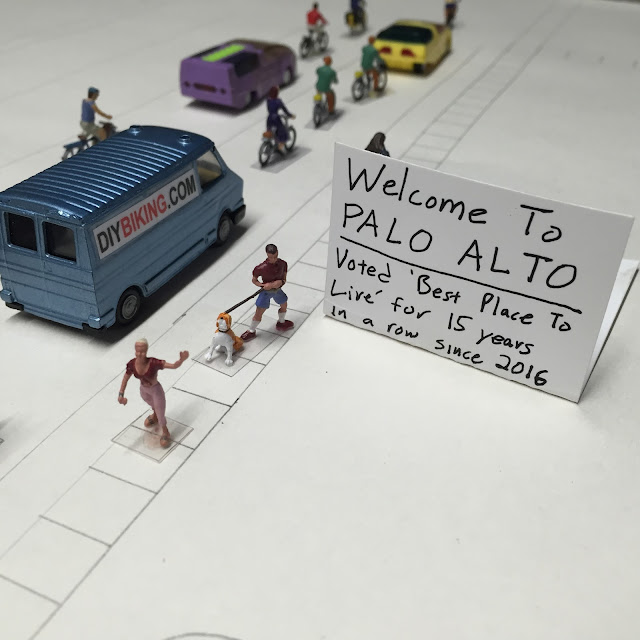 So how do we enable bike parking? Glad you asked.

Like a fine wine, this is best paired with No. 5. We get traffic when we enable driving. If you want to reduce traffic, you need to enable other modes of transport. Providing safe, secure and convenient bike parking helps (if it isn't confusing all the better). 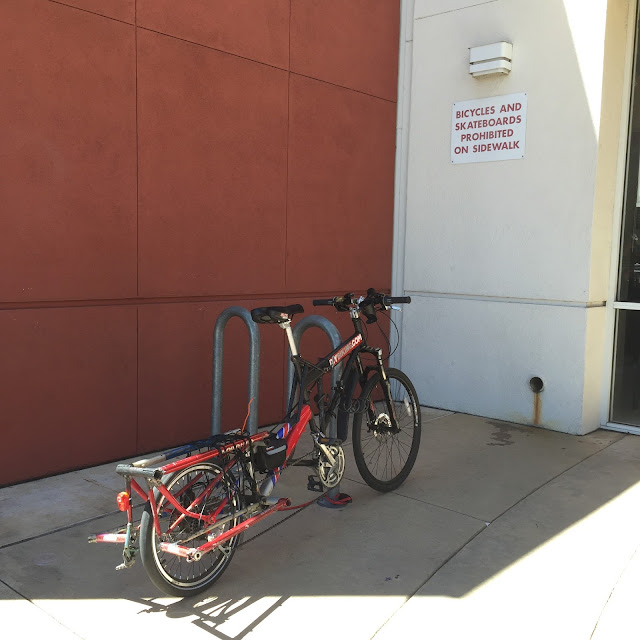 Every time I park here in San Jose I think that if I stare long enough a tear in the universe will appear.

And if we need space for bike parking we must take it away from cars before we take it away from pedestrians. Before any diehard motorists are triggered at the thought of having to circle the block another time for parking, let me remind you that you spend an awful lot of time looking for a space to put a motor vehicle that you no longer need to use. It makes more sense - as the great coffee shop in Stamford Lorca is doing - to get rid of a parking space and get something better in its place.

3. Cut the Tax Break for Electric and Hybrid Cars

One of the best recent books I read was The Worst Hard Time - which is about the Dust Bowl. It noted that the 1930s gave birth to agricultural subsidies that helped rescue small farms at the time but ended up being the wasteful subsidy for agribusiness it is today.

What are we going to say about the hybrid and electric tax breaks five or six decades from now? The technology is proven and getting better all the time. It a lot of places it's easier to park a $100K Tesla than it is a $100 Roadmaster**.

A tax break on cars - if one should exist at all - needs to apply to low income people (especially, as the Mercury News recently reported, a place with a hollowing middle class) and maybe married couples who have only one car between them. Why my tax dollars need to go to the $100K Tesla sitting right next to a top-of-the-line GMC Yukon in the same driveway of a $3 million house hasn’t quite been explained to me. Thoughts, Mr. Musk?

As I’ve written about before (in Uncle Traveling Matt***-like dispatches when I first moved to California) the trains in California are superior to the trains in Connecticut. The VTA is fantastic and so is Caltrain - they both allow bicycles on board (and yes, I had VTA in mind when I designed my folding cargo bike). 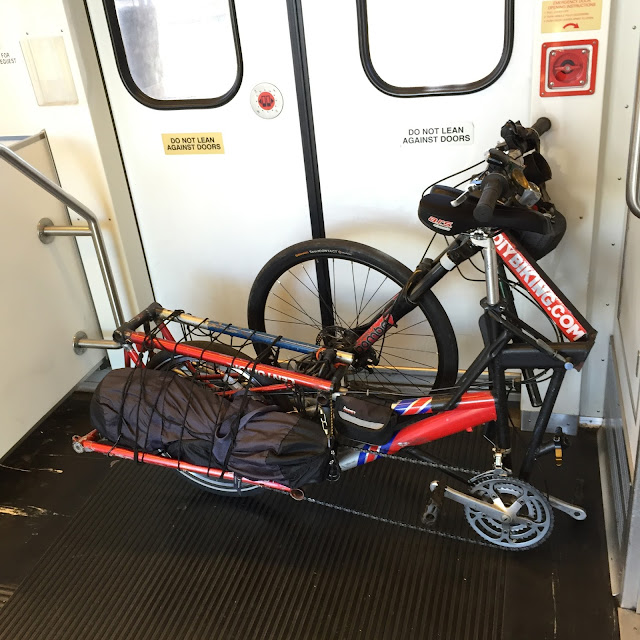 Where Connecticut beats California has to do with frequency. There are a lot more trains. So demand more service - and stop demanding for more car infrastructure at the same time. 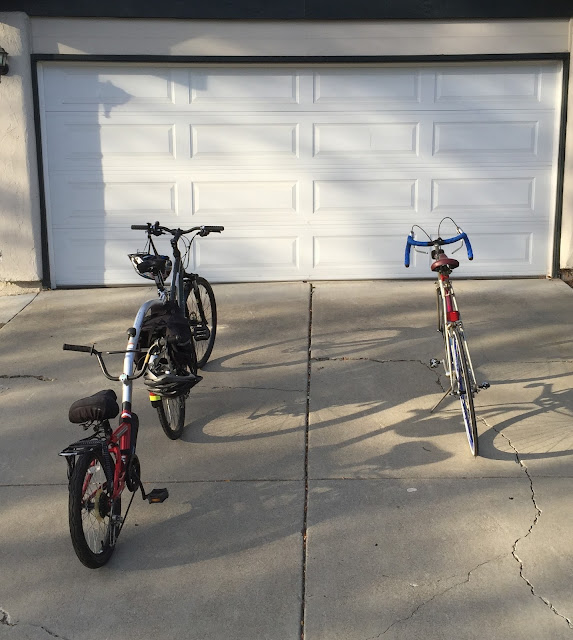 Remember the thirteen words: If you have a bike and can ride it safely, please ride it. I you don’t have a bike go to Good Karma Bikes on 460 Lincoln Avenue or another local bike shop and pick one up. You save money, you actually help the environment instead of add to the spectacle of helping the environment, and you get fitter. You also get to meet nice people, don’t have to pay for parking, and you give a parking spot to someone who needs it more than you.

I’ll watch out for you on the roads. Watch out of me, too. Thanks for reading and thanks for riding.

* I actually have no idea if No. 4 will surprise you or not. To be honest, I wrote this so fast I don't even remember what No. 4 is.

** That is sadly true in a lot of places. Something’s wrong there.

***The Internet doesn’t have that many Fraggle Rock references. Congratulations for reading one.