Top Banana: A Very Special Episode of 'Saved from the Scrapheap'

It's summertime, so I want everyone to keep a sharp eye out for kids on their bikes. And grown-ups too. And not just during the summer, but in all seasons in the year.

Summer is always a special time for biking for the same reason family vacations are always special: it's a time to relax, have fun, and reconnect. And what better way to reconnect with everything that made summer biking fun than with this: 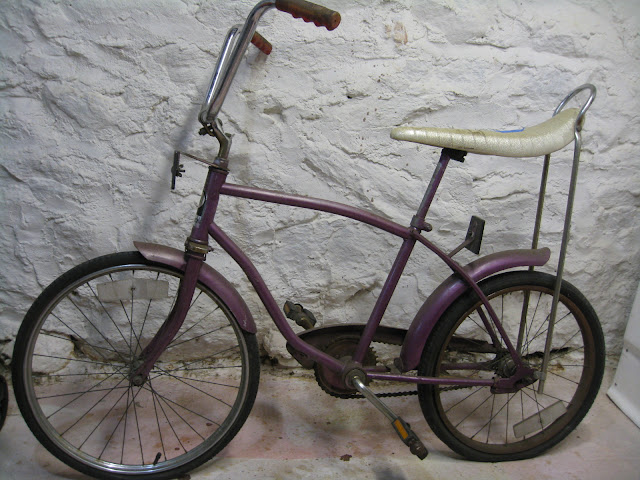 For less than the price of a DVD I picked this up at an estate sale in Stamford. It may not have moved an inch in more than 30 years, but you can feel the summer magic just by looking at this one-speed Iverson with a banana seat. The logo itself is absolutely priceless: as you can see, it is a riderless bike careening out of control on a curvy road. Probably because the young rider fell off and landed in a ditch. 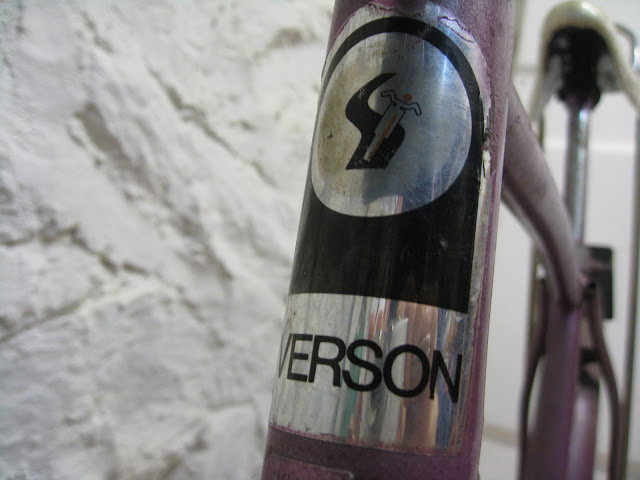 But the thing that makes this bike special is the banana seat. It meant you could grow with the bike and possibly carry a friend along with you/use the seat in a manner inconsistent with its labeling. I had a bike very much like this one when I was growing up that I always used during summer vacations. When I started to outgrow it, I attached it to two pontoons, replaced the front tire with a wooden rudder, and made the rear tire into a paddle so I could ride it on the water. But that's another post for another day - and I hope my parents dig up the old pictures.

Now this bike, as you can see, wasn't in the best shape when I picked it up. But I was convinced that it had some more summer fun left in it. So I set to work repairing it.

However, I quickly found that I was out of my league with the front wheel. I inflated the tire to the proper PSI and about ten minutes later....BOOM! 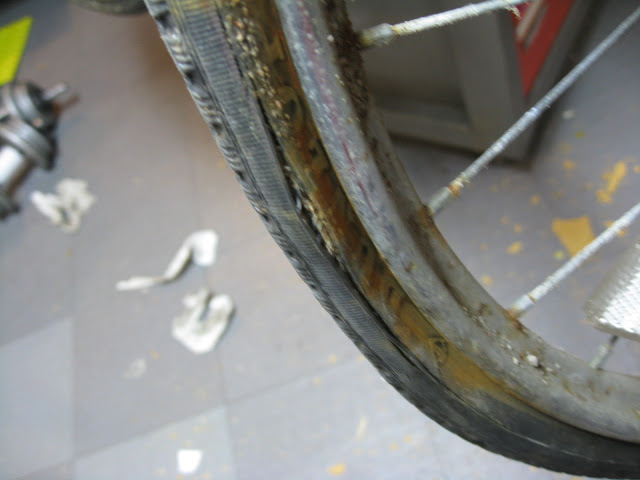 The tube exploded right through the sidewall. I immediately thought of Will Smith's character in 'I am Legend': It's three years after the end of the world, he's living alone in New York City surrounded by zombies and he continually says: 'I can still fix this.'

Thinking positively, I continued cleaning up the bike and making sure the rest of it was in decent working order. I then removed the wheel (which could barely turn around anyway) and went rummaging through my bin 'o parts. Before long, I came up with a solution. 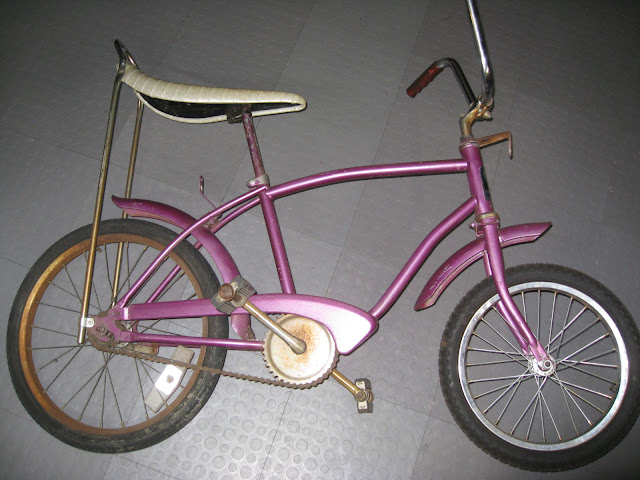 The front wheel, while smaller than the people at Iverson had in mind when they built the thing, was true and solid. Even though it did not explode when I inflated it I was careful when inflating both it and the rear tire...which wasn't in good shape. 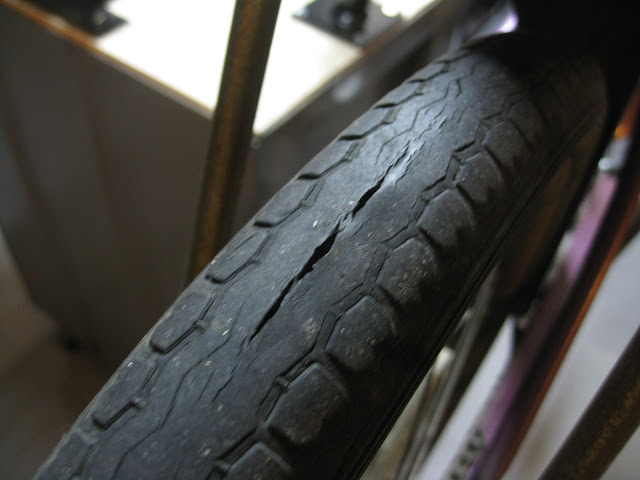 Still, I remained confident it would stay together long enough for a good summer ride. Sort of.

When we were all kids and rode bikes like this one, wearing a helmet never occurred to us. But to remain safe and stay true to 21st century overprotectiveness, I not only put on a helmet, but I wore the hard plastic elbow guards I wear when I go mountain biking. 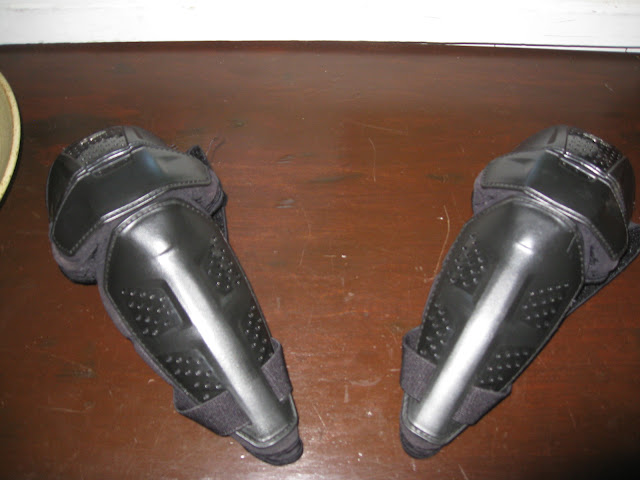 Also, to make sure I wouldn't get lost, the banana seat bike would be equipped with my trusty Garmin bike GPS. When I was a kid it didn't occur to me I'd one day ride a bike that used satellites circling the earth to keep track of where I was going, but no matter. 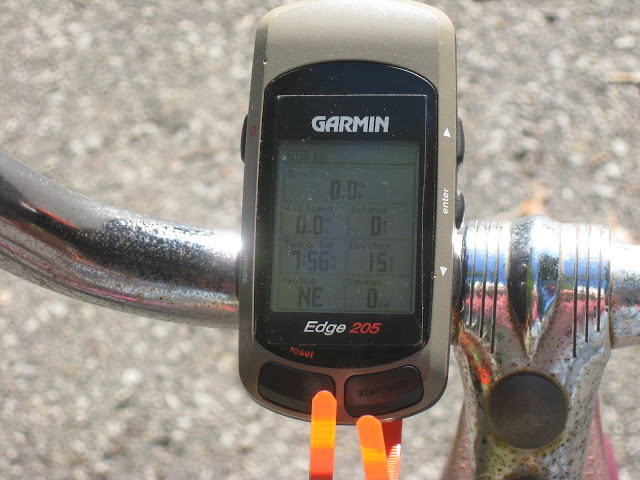 As you know from other posts, I do like to promote the DIYBIKING.COM brand when I'm out and about. But this bike didn't have a rear rack on which I could attach the better bike box. I decided not to let that stop me. 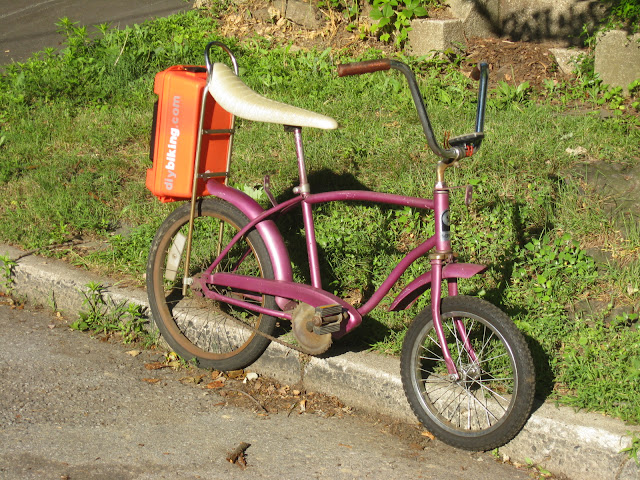 As I mentioned, a great thing about the banana seat is that you could grow with the bike and change your riding position as you got taller. I'm sure there's a fine line between a 12-year-old getting on a bike owned by his 10-year-old brother and a 5'11" 36-year-old man with a helmet and elbow guards mounting a bike that should have mounted a Dumpster years ago, but no matter.

I planned a series of summer activities to do with the bike for a short ride. The first thing I wanted to do was to ride exactly one mile and record my thoughts about the experience, much like I did with the Coffee Cup Challenge.

I activated the GPS and set off. Immediately I was thankful for the comfortable seat on my recumbent and the Thudbuster seatpost I use on my grown-up bikes. I must have had a better tolerance level for the seat when I was eleven, but at 36, I was feeling every crack in the road...and well aware the rear wheel was badly out of true.

I was enjoying myself but remained thankful I was wearing the helmet and elbow gaurds. Like I said, the bike may not be built for a 36-year-old rider because the handling was rather twitchy. I soon got used to it...and I realized that since I had the GPS I could (why not?) figure out the bike's top speed.

Remembering the glorious summers of the early 1980s, I pedaled as hard as I could on the road leading up to West Beach, keeping an eye on the spedometer. The bike vibrated uncomfortably and my legs were a blur, but I kept the Iverson under control...and hit a top speed of 20.4 miles an hour. The last time I rode a bike like this I vaguely remember telling friends (or them telling me) that I was going '1,000 miles an hour!' but I guess it was more of a feeling than a reality.

I allowed the bike to coast to a crawl before taking a quick but triumphant picture. 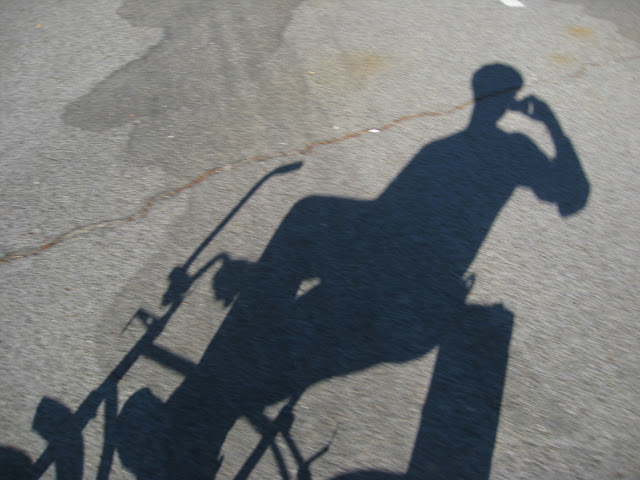 Wrapping up the mile, I took the bike onto the dirt near the boat launch ramp and stopped next to some spent (and probably illegal) fireworks. 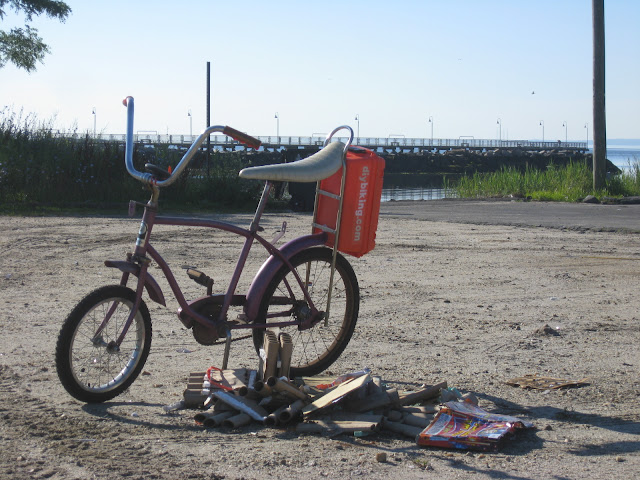 It was time for the next summer activity: put a baseball card in the spokes so the bike would sound like a motorcycle.

I do not own baseball cards. What I do have a lot of though are business cards, so I decided to see if one would work and produce the sound that I remember from our youth. 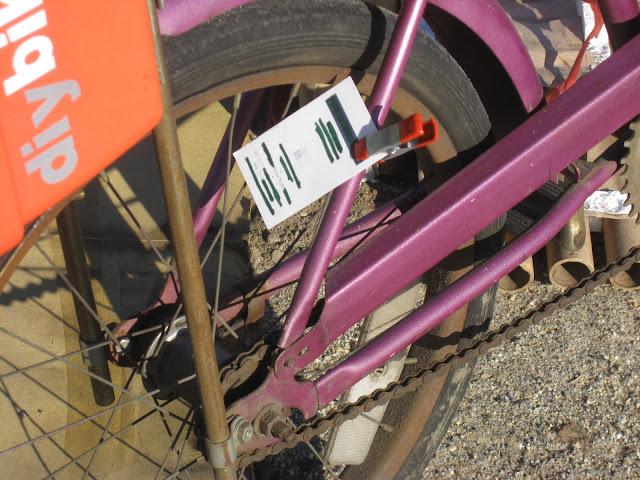 With the card secured, I set off. Immediately I was met with that sound...but it wasn't quite as glorious as I remembered. The sputtering sound wasn't consistent and nice, but rather jagged, which told me that the spokes of the wheel were a lot more bent than I thought. So the bike sounded like the kind of motorcycle it would be: missing on a cylinder and about ready to fall apart.

Still, it had some of that summer magic and I think the look the old guy on the park bench who was (and I do mean, was) enjoying a quiet summer morning at the beach gave me was that of wonder. Or maybe it was confusion. With the elbow gaurds, the better bike box and the noisy sputtering sound, I may have looked and sounded like Mad Max as a ten-year-old than a guy trying to write a serious blog post. No matter. I was having fun. 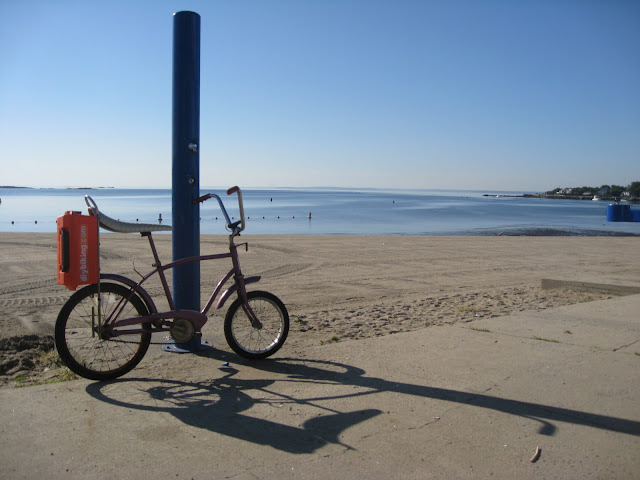 Now it was time for the final summer activity: laying a skid. Bikes today, even bikes for kids, normally have caliper brakes and both the front and back wheel. This bike? A coaster brake. This meant you could pedal like mad and throw your legs in reverse and skid. I only wish there were others there with me so I could have a contest on who could make the longest black mark in the road.

Instead, I decided to do best out of three...if the bike would stay together long enough for me to make that many marks. As I tried to remember how much the deductable was on my health insurance, I got the bike up to speed and slammed on the brake.

Once again, I was met with a sensation I do not recall from youth: instead of making a SPSSSSSSSSSSSSSS! noise and leaving a consistent black mark, the Iverson shook violently and hopped up and down while skidding; almost as if the bike was choking on the road it was trying to eat.

Still, I did have a result and didn't crash. So I did it two more times and ended up with this: a skid four parking spaces long. I'm pretty sure I did even better when I was eleven, but my 11-year-old self wasn't around to challenge me. 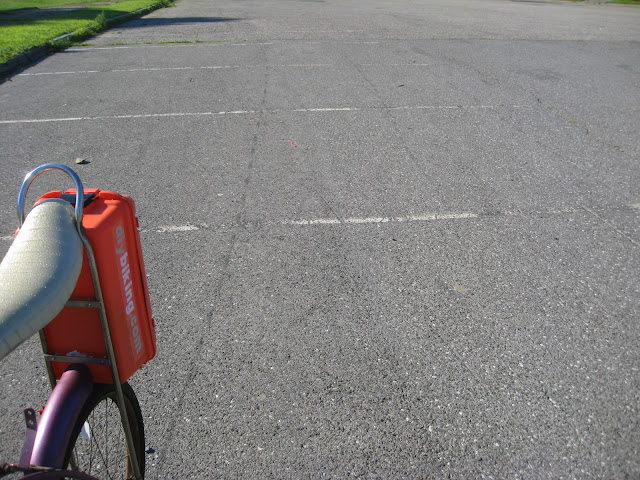 I would have kept it up and gone for a fourth skid, but I wasn't sure the dodgy rear tire was going to hold up much longer. So I did not engage in a fourth summer activity (which would have been taking the bike off a sweet jump) and instead took it home. As I pushed it up the front steps, the better bike box fell off, which told me that after 2.07 miles and an average speed (including all stops, mind you) of 7.1 miles an hour, it was time to retire the Iverson.

Even though I will probably never ride a bike like this again and you may not either, it is important to remain connected to the fun and excitement biking brought you as a kid by whatever means necessary. Including, but not limited to, putting a business card in the spokes of your Trek Madone. So enjoy riding with friends this summer, wear a helmet, and be home before it gets dark.