If you want to keep your workshop clean, you have two options: clean your workshop regularly or change the definition of the word 'clean' to match whatever state your workshop is in. Either way, if someone asks if your shop is clean you can always spin your reply by starting with “Well, I wouldn't build computer chips in it, but...”

I admit that my wife and I have different definitions of the word, but I do like a 'clean' workshop. I don't like having to step over things and as you've noticed in earlier posts about my organized clutter, I like being able to find something within a month (two, tops) of starting a search for it. I'm not one of those people who can reach into a pile of stuff and find the exact item they were looking for, and the way I treat my tools, bikes and other stuff reflects that. Sort of. 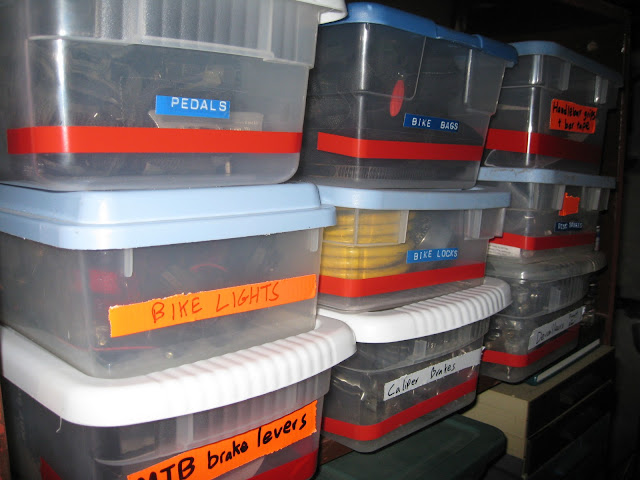 There's one thing I've found about keeping the shop clean: it's hard. Especially since it gets completely messy in what seems like a short amount of time. But I've done a lot of thinking and I'm convinced there is 'gateway clutter' that can quickly push a clean workshop to the dark side.

In my shop gateway clutter starts at the ground level. If I let just one tablespoon of sawdust stay on the floor for more than 24 hours it begins to spread. Before the 36 hour mark, there won't just be enough sawdust under my sneakers to build a few pieces of IKEA furniture, but there will be a banana seat on the workbench, a frame lying on the diner booth table, and enough parts on the floor to build at least three bikes – even if I only took apart one. For instance: one day I went to the shop just to add a bottle cage to one bike and by the time I was done I was left with this: 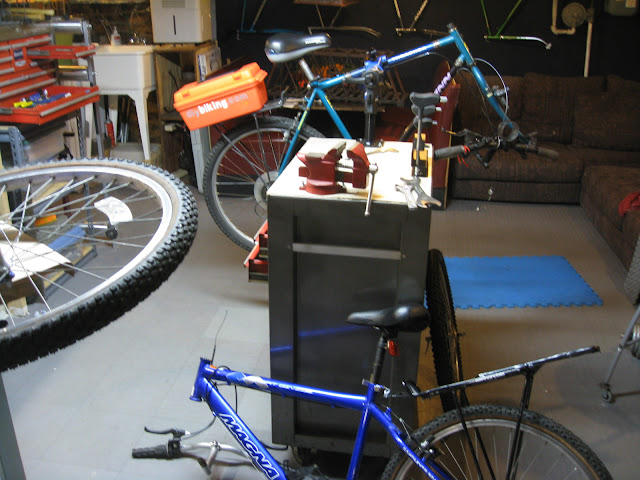 Yes, it all starts when stuff other than my feet and rolling tool cabinets touches the floors. If the same is true for your shop, I've found there are a couple of ways to stay ahead of the gateway clutter. The first one is a shop vac. I have a six horsepower Craftsman Wet Dry vac that is powerful, but it is also cumbersome and a chore to set up, especially since part of it is stored beneath the chop saw and the hose hangs near the water heater. When I realized that not wanting to commit to setting up a garbage truck-sized vacuum was leading me to avoid the task entirely, I went ahead and got what turned out to be the Fiat 500 of shop vacs: 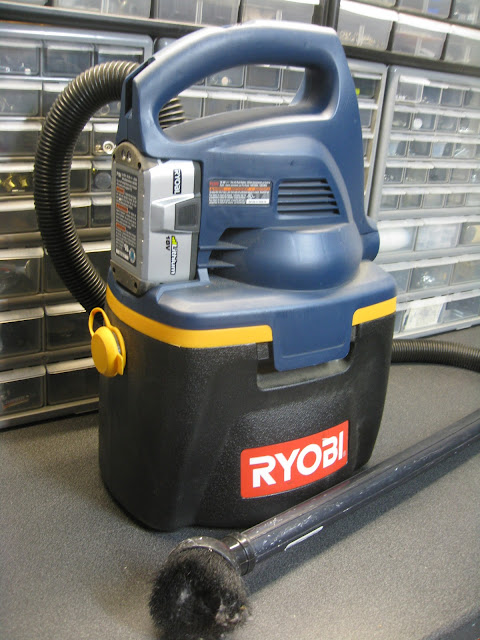 This is a RYOBI ONE+ vacuum that, yes, runs on Ryobi's 18v battery. It's small, powerful, nimble - and if you buy one you'll have little recollection of how you got along without it before. As my wife and I discovered, it was not only useful in the shop, but it was perfect for vacuuming out the car. And getting rid of the spiderwebs in the fireplace. And getting the edges of the baseboards. And cleaning behind the bathroom sink. And...so on. This vacuum's versatility became my shop's downfall as it hasn't been there to clean it in months. It only shows up from time to time for a fresh battery before promptly leaving again. What was the Fiat 500 turned into Kramer from Seinfeld (though it only borrows batteries; not turkey basters or sink strainers).

So I needed a vacuum that would only be used in the shop, be easy to use and wouldn't be likely to be brought elsewhere in the house. One day, on eBay, I found what I thought was the answer. Stay with me just a moment: yes, this is a Roomba, a robotic vacuum cleaner from iRobot. Somewhat similar to the embarassing purchase of the A-Bike, it was really one of those days when I bid very low and couldn't believe my auction triumph later. I thought the Roomba would be able to handle the sawdust, dried mud from bike tires and metal filings that made up the gateway clutter in my workshop. I also thought it would be nice to not have to do any physical effort with the cleaning.

My wife's face showed an awful lot of skepticism when I explained all this.

When the Roomba arrived, I learned from flipping through the owner's manual that I could purchase a self-charging home base for this entry-level model so the robot could return to the base to charge itself when it was running low on power. For about $120 and a visit to store.irobot.com, I could also buy a iRobot Scheduler and a charging base so the Roomba could be scheduled to go clean the shop on a regular basis without my input. Since that was more than twice what I paid for the Roomba and my used robot was unproven, I decided to hold off on such a commitment.

Turns out, the iRobot people should consider marketing this thing in bike stores. Because I found that when you clean several chunks of Vermont's Northeast Kingdom off your mountain bike, the dried mud lands on a small area. 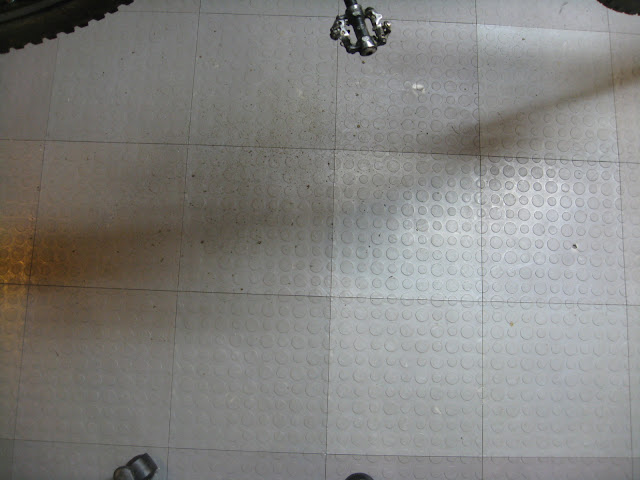 The 'spot' button on the Roomba sends it spiraling about in a small area; thus cleaning said area. 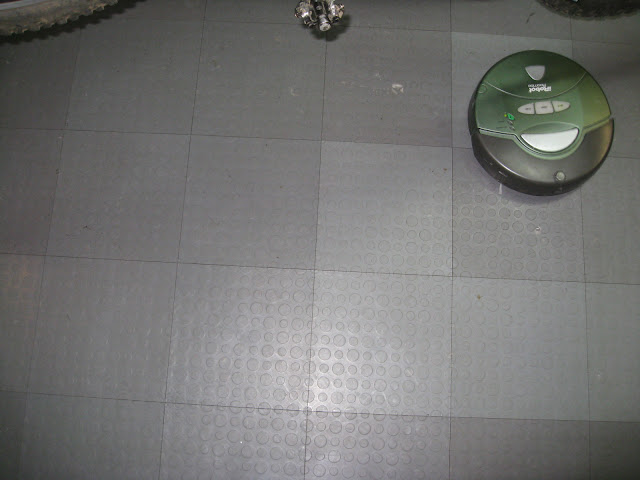 All isn't perfect with the Roomba, at least with this model. For starters, it is quite noisy so I don't understand how anyone can just hang out in the room and watch it work. And since the travel patterns on the floor are a bit unpredictable I wasn't keen on staying in the shop anyway for fear of stepping on the thing. So, on the morning I decided to use it to clean the whole shop, I turned it on just before leaving for the day.

When I got home the Roomba was in a different part of the shop than it had been that morning, and at first glance the floor was clean. However, I noticed a few small spots it seemed to have missed. I wondered if it was running out of power before its time or if it was just confused about the perimeter of the shop. I decided I needed to find out if it was covering the entire shop floor, but as I was unwilling to watch it work or to cover the floor with white flour, I thought I could set up small obstacles that were light enough for the Roomba to knock over but large enough not to get caught in the wheels. After a few minutes of searching, I had my solution. 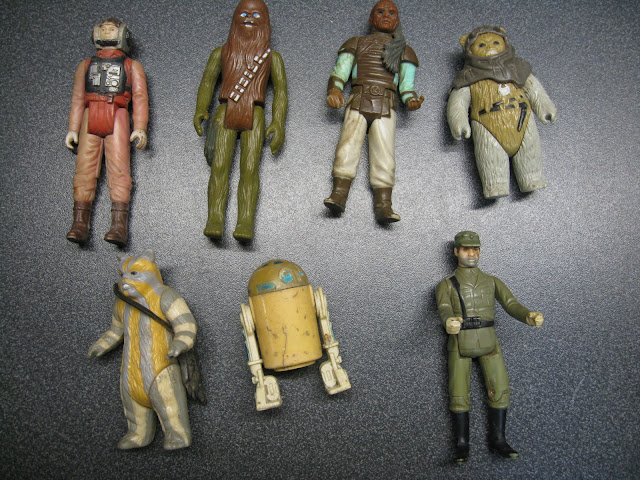 Yes, I had a lot of action figures when I was a kid. But only a small number of the toys survived their time with me (If you recall the film Toy Story, I was more of a 'Sid' than an 'Andy').

The extreme age may have discolored some of the survivor's limbs, but as you can see I have an identifiable B-Wing pilot, Chewbacca, The Guy Luke Knocks Into The Pit, Ewok 'A' and Ewok 'B' (I haven't played with these things in a quarter of a century. Like I'm supposed to remember their names), a circa 1977 R2-D2 and Indiana Jones disguised as a Nazi guard. I know Indiana Jones is not a member of the Star Wars cast, but I had a pretty active imagination growing up.

I decided to set the action figures up at various intervals around the floor. I figured if the Roomba could knock over them all, it was probably covering the entire workshop. 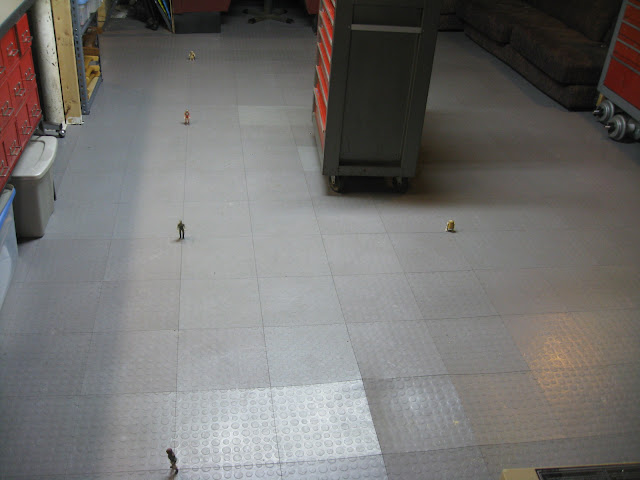 So on a Tuesday morning, I set the fully charged Roomba up, hit the button, and left the house to go to work. When I came home, I discovered the Roomba did in fact knock over all of the action figures. Some of them were quite a number of feet from where they had started, but they were all lying flat. My workshop had become a Kenner Jonestown. 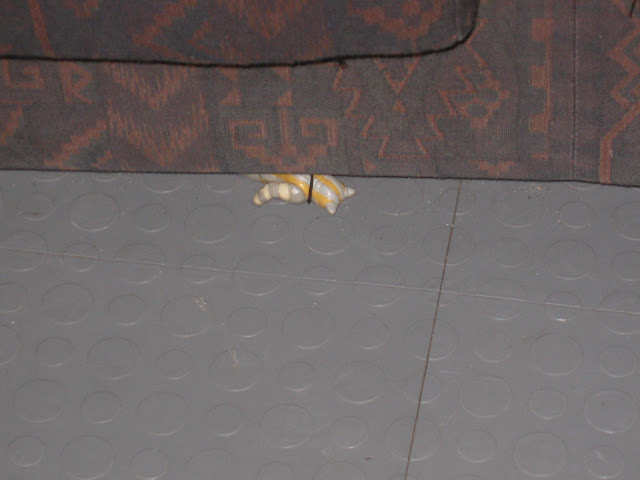 Even though the floor wasn't completely clean, it was cleaner than it was before and I didn't have to vacuum it myself. Later, I discovered the battery just wasn't taking a good charge, and I ended up getting a replacement battery as a gift for Christmas. The Roomba has done a much better job since.

So, there you are. If you want to keep your shop clear of the gateway clutter and don't want the hassle of a shop vac,  a used Roomba might be the droid you're looking for. 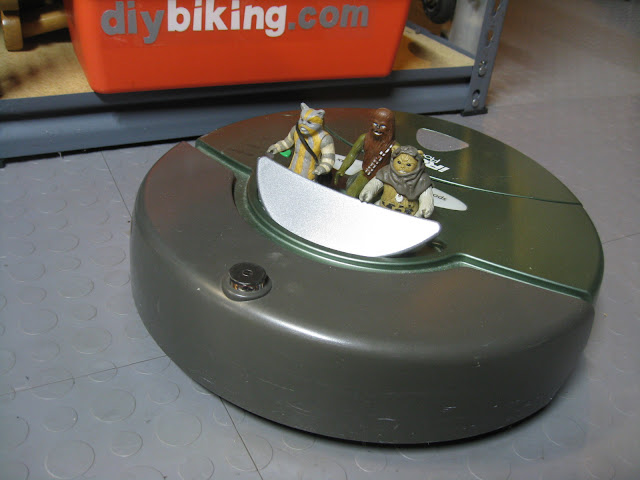