Mountain Biking in Manhattan (Yes. That one.) 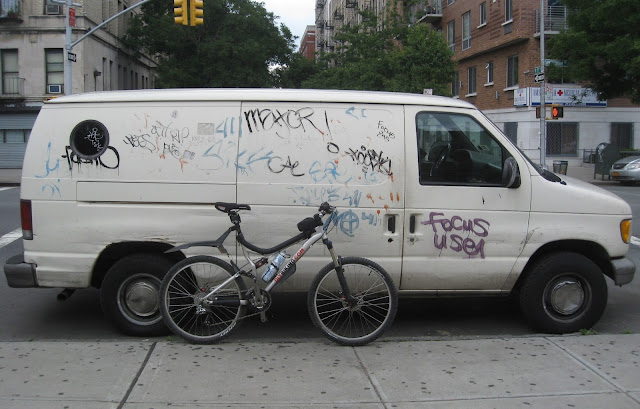 The whole reason I went mountain biking in Manhattan on Sunday is because my wife wanted to visit an art store in Darien, Connecticut on Saturday. Walking from the art store that afternoon I noticed a barber shop that was still open. Nobody was ahead of me so I got my hair cut for the first time since visiting London. While my wife was waiting for me she became bored and thumbed through Outside magazine, a periodical we don't get at home. A bit about the Highbridge Park Trail System caught her eye, and our Sunday afternoon just fell into place.

This is part of why print needs to last forever: I have nothing against getting your media (like DIYBIKING.COM) on tablets but the experience is so personalized that kind of thing would probably never happen if you're finger-swiping your way through your usual stuff and never have to rely on someone else's magazines.

So on short notice and for the first time since visiting the Cleveland Metroparks, I got my homemade mountain bike together for a quick trip to New York City, which was easily done by taking the Metro North from Stamford to Harlem-125th St. station. When it's a busy Sunday, I keep my bike in the vestibule, and three mini bungee cords will hold it – or any bike - in place: one wrapping the rear tire around the pole and the other two as shown. 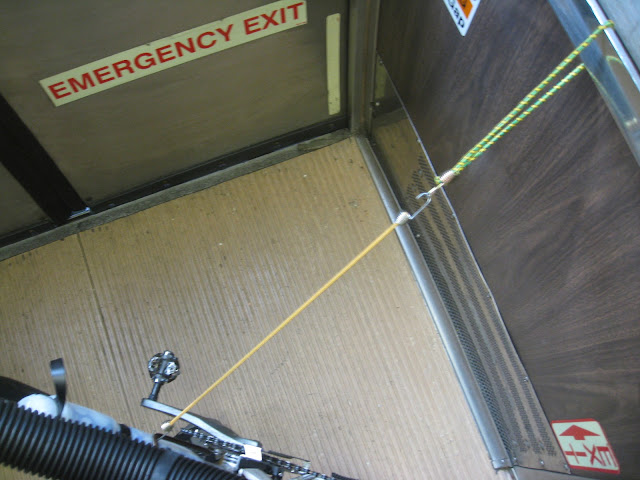 When we arrived, my wife headed off to sketch while I biked down 125th street and took a right on Amsterdam Avenue. I could have taken a subway to a trailhead (as suggested by the Outside article) but was feeling limber enough to handle several dozen blocks. 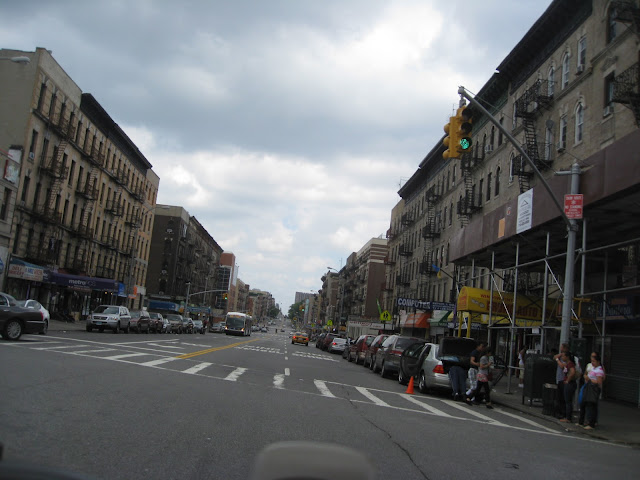 I did okay, but I admit I did miss the polite, non-honking motorists of Cleveland. Also, the bike I built lost a crankarm on the way up (well I didn't lose it; it just came off and since I was clipped in it just clung awkwardly to my left shoe) so I had to stop briefly to wield a minitool in front of a psychic's office – who probably saw that coming.

With no other noticeable, debilitating mechanical defects, I ended up entering the trail at the dirt jump park, which is at the part of Amsterdam Avenue that turns into Fort George Avenue, just past 190th street. Nearby, there's a basketball court, a baseball diamond, and, that day, an ice cream truck that played The Entertainer/theme from the Paul Newman film 'The Sting' as it rolled by the park. 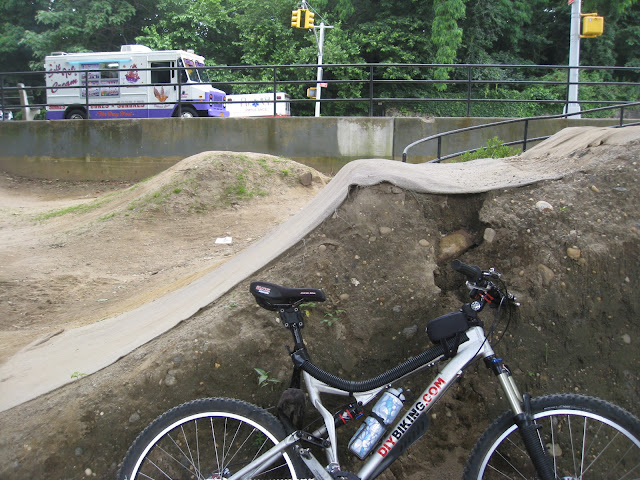 Despite not owning a BMX bike in years, I took a few laps on the Highbridge Mountain Bike Course. After all, I didn't really see how the new bike would do on rough stuff at Cleveland. On these huge but tiny hills, it did great and the suspension is cushy-soft, but if you'll look closely at the picture above you'll see the rear fender is bent around the side of the seat tube like a bad comb-over, so I ended up removing it entirely and stowing it in my backpack.

Then I took a quick look at the trail map and set off. Because of where I was, the 'less difficult' trails were the first ones I hit. Some nice singletrack, but I was distracted by realizing that all this was somehow in New York City. Thanks, New York City Mountain Bike Association. 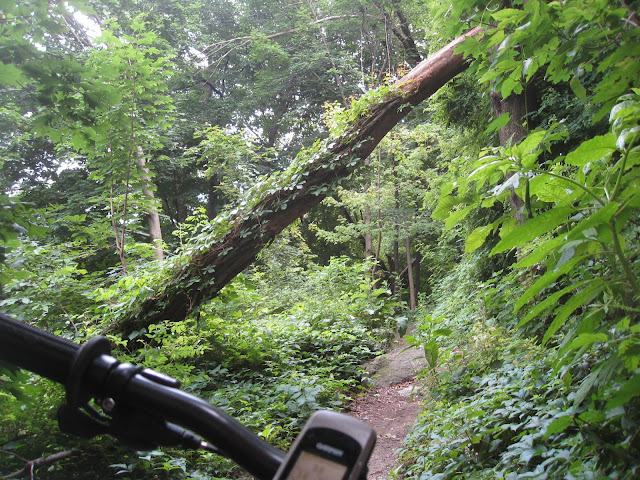 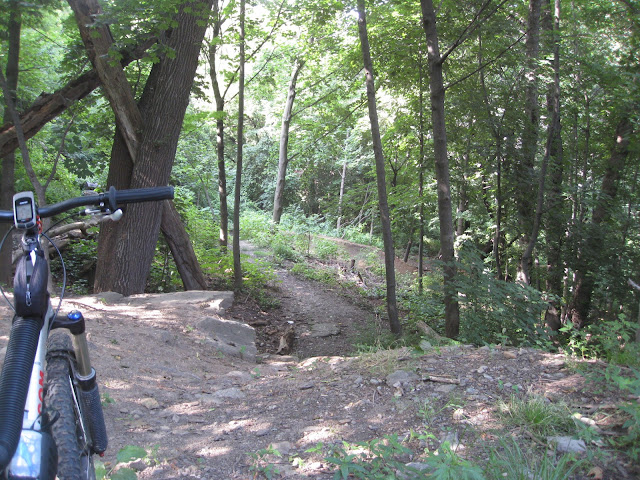 I did have a couple of reminders that I was, in fact, in NYC. Depending on where you are in the park you can usually hear the traffic on the Harlem River Drive or Fort George Hill – which is actually useful to get your bearings. Also, you can sometimes see evidence that the city makes unwelcome visits to the park and leaves general litter and some teeny-tiny plastic bags (you know, for postage-stamp sized sandwiches). Trails don't maintain themselves, and I can only imagine how much work the New York City Mountain Bike Association and the city's parks department has cut out for them, so before leaving for the day I walked along part of the beginner trail and carefully picked up every large piece of glass I found. I was mainly worried about a flat tire spoiling someone's day. So if you can do it in a safe and non-gross way, it's good to leave any park with more than what you came in there with.

Happily, I suffered no flats as I wound my way through the trees, and the errant empty bottle of wine couldn't block some of the views. 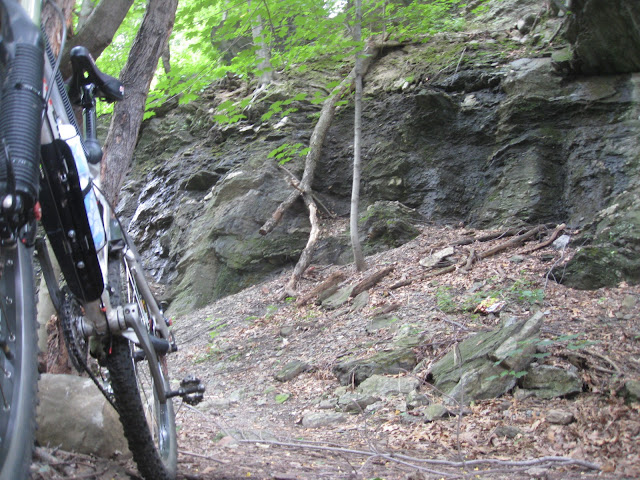 However, I was soon hit with a problem with my old nemesis: the front derailleur. I lost the ability to shift into the lowest gear in the crank and thus began to balk at some of the climbs. I've had trouble adjusting this properly on my Park Tool workstand, a full size set of tools, lemonade and tortilla chips within reach, and Season 10 of Top Gear on the TV so I knew I wouldn't have a chance trying to fix it proper in the urban jungle. So I got along without it, stopping on the steep climbs but flying down the hills. All in all, I was able to do a few miles of mountain biking in Manhattan and feel some good bumps through the suspension that rivaled most of the five borough's potholes.

I had also started the afternoon mostly riding alone, but I met a few people on the trails while I was in and on the way out, I noticed several spectators and riders enjoying the mountain bike course. 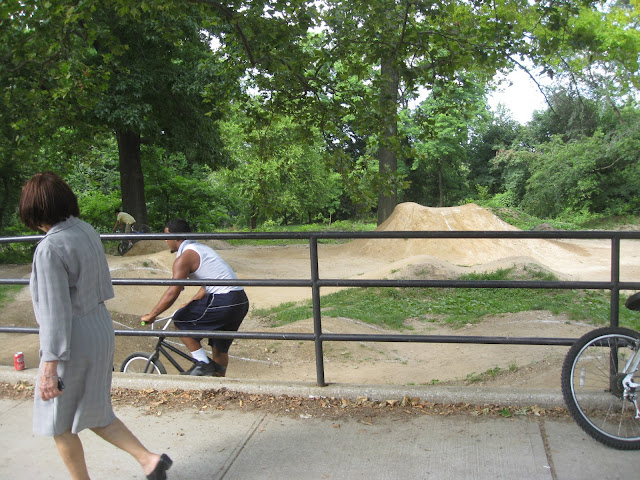 I would have watched myself, but I needed to head south to meet my wife at the station. That allowed me to put the mountain bike back in the Big Ring so I could cruise as fast as five blocks per minute at times. 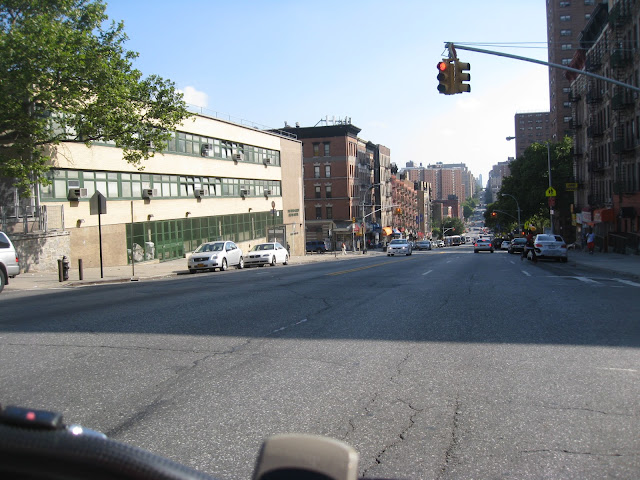 On 125th street, on a Sunday afternoon, it was very busy so I kept a sharp eye on the helmet rearview mirror, inattentive motorists and a lumbering double-decker sightseeing bus. Another peril was the heat, so I stopped and got a drink at a pushcart that happened to be on Lenox Avenue right across from Red Rooster, a great restaurant my wife and I ate at back in March that she sketched. 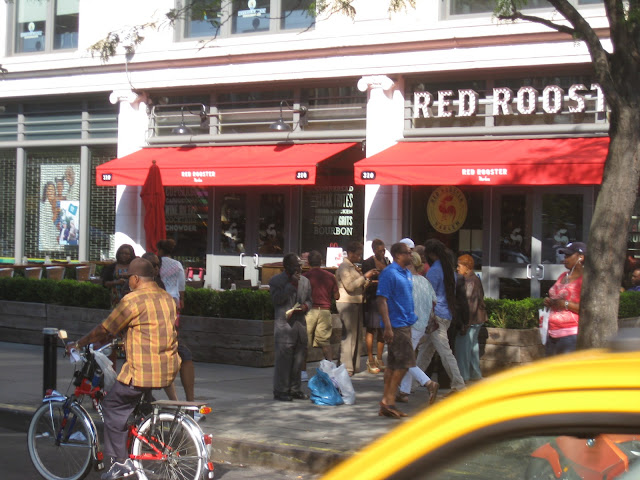 New Harlem dinner plans would have to wait for another trip, as we were to get on an early train. Still, it was a great day of mountain biking in Manhattan. Remember, if you go: 3 bungee cords, plenty of water, body armor and a full-frontal helmet (if you do the double-black diamond trails), a plastic bag to put litter in, and bike tools. And bring a great bike. Failing that, bring a bike you love. Thanks for reading. 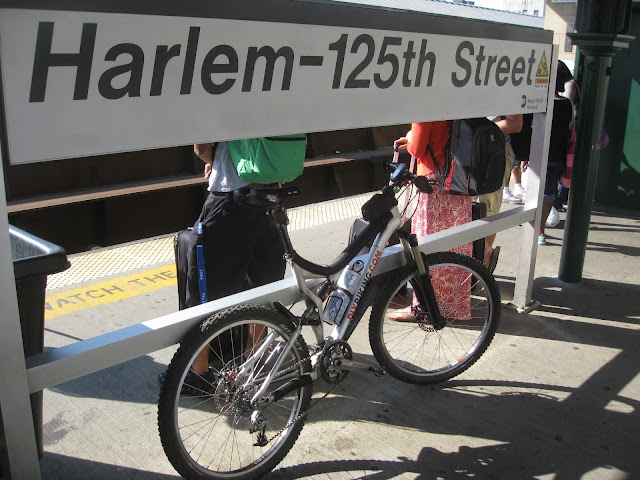