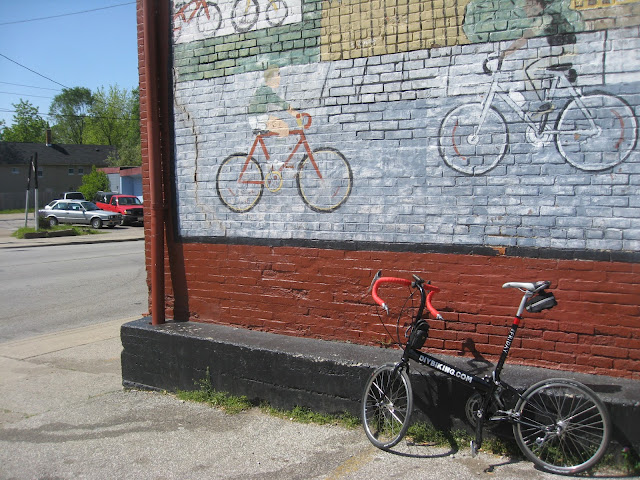 After visiting the Ohio & Erie Canal Towpath and part of the Cleveland Metropark system, I moved on to the part of my trip where I'd be staying in downtown Cleveland. With the Element tucked in a parking garage for the balance of the trip, every ride originated with the Bike Friday from the Marriott Residence Inn on Prospect Avenue. 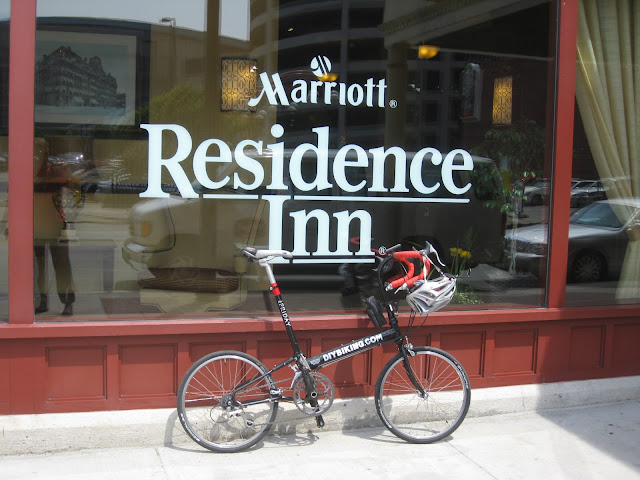 There's no vast lobby here; just a friendly staff and a comfortable room large enough to easily put a bike in (but be very careful not to scratch the nice wooden doors as you walk it in and out of the entrance).

Thanks to a couple of Google searches and a map I found from Positively Cleveland, it didn't take me long to get a lay of the land. The map showed a large number of attractions, entertainment options, sports venues and shopping areas – but there was only one attraction on that map I was interested in finding before the end of my trip. I circled 'The Attraction' with a hotel pen.

A slight complication was that due to a few Grown Up Things that had somehow infected my schedule, I wouldn't have the biggest blocks of time during each day to explore. But I still made the most of it, and found that it isn't difficult to find places to ride in Cleveland when the people are so nice. For instance, on day one I had lunch at The Greenhouse Tavern on Fourth Street, which is full of places to eat with outdoor dining.

What made this place special – other than the good food and the attractive servers - is they had recently partnered with a local bike shop, Blazing Saddle Cycle, for an exhibit, Respect the Bike. Though the event was over, the decorations still remained. 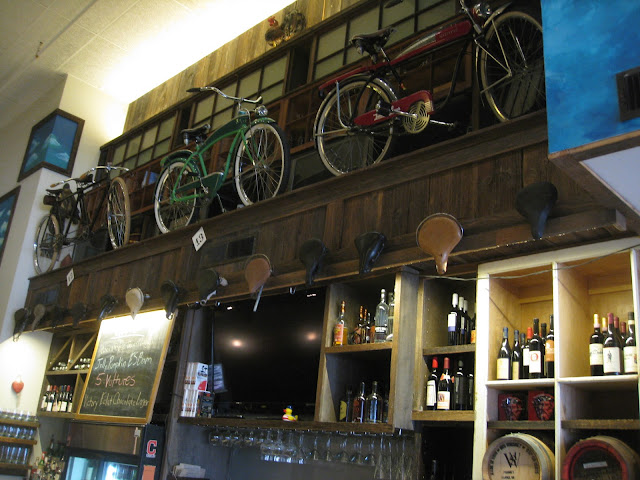 When I told my server why I was in town, I quickly learned she was helpful in addition to being pretty as she brought me a map to Blazing Saddle Cycle and a few other things to help me learn about the cycling scene in Cleveland. I kept everything she gave me, but I knew that the only way to learn about the bike scene in Cleveland was to actually ride in Cleveland, so soon after I paid the bill I set off through town.

Now if you're from the East Coast: one thing about riding in Cleveland is unsettling: No matter where I went, how fast I'd ride, where I'd lock my bike or what I wore...I was treated politely by motorists. I never heard a car horn, never saw a scowl and never smelled any anger. Nobody blasted by me in the car and everyone gave me space when overtaking the Bike Friday. Some motorists even smiled at me.

It was eerie. But it was also telling: I think Tom Vanderbilt's book Traffic spells this out more thoroughly, but the more people who ride bikes in a city, the more motorists will be aware of them, and the safer (and happier) everyone is. Are you reading this, Stamford-guy-with-the-Ford-Explorer-who-shouted-'Use the sidewalk!' as-you-barreled-by-me-on-Bedford-Street-only-to-watch-me-catch-up-to-you-at-the-next-traffic-light-and-ding-my-bike-bell-in-defiance?

Also, unlike other cities that have a river or two cutting through them (cough, New York, cough) I found it easy to find passage across. My first trip after the visit to The Greenhouse Tavern (to find The Attraction I wanted to find on the Positively Cleveland map) took me on Carnegie Avenue and the bridge that crossed the Cuyahoga River. 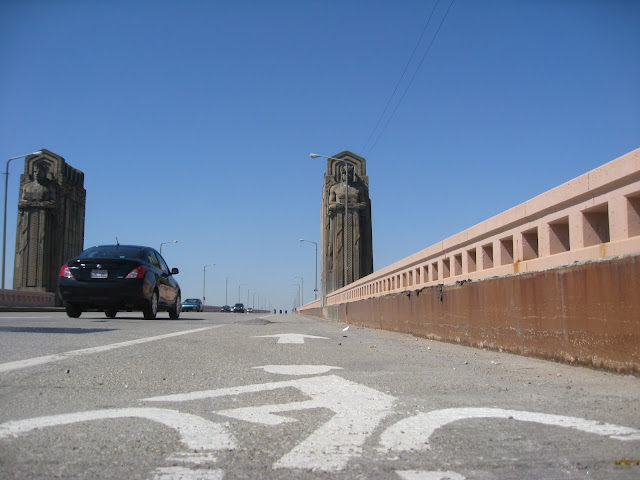 This brought me back to the West Side Market, but it also brought me to my first bike shop, Joy Machines on West 25th Street. 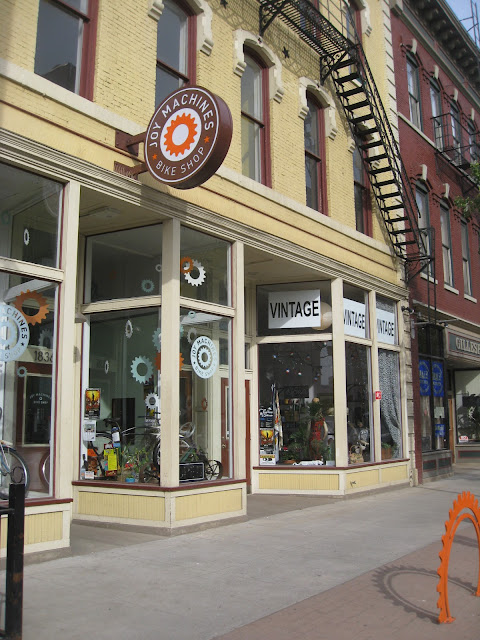 As the name implies, I did see a number of bikes that looked as though they would provide joy. They also had several commuter-friendly items I wasn't used to seeing and a few homemade items I liked immediately. Needless to say, I spent a lot of time in the shop. 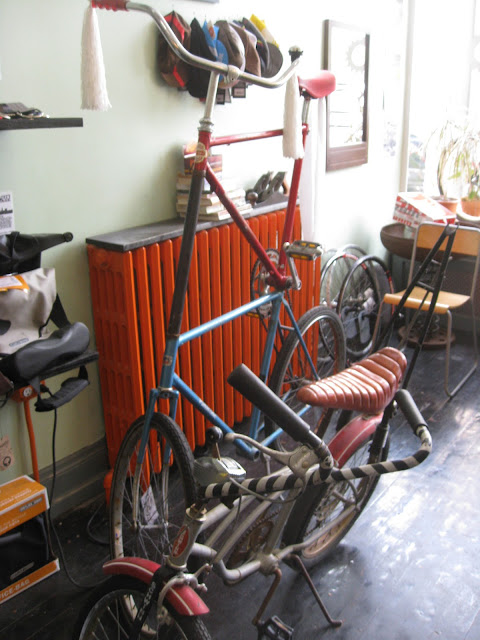 After leaving Joy Machines and searching for The Attraction, I realized I wouldn't get there and back in time for a Grown Up Thing I needed to do back at the hotel, so I recrossed the river and easily made it back to the Residence Inn.

The next day, I tried again, only this time I warmed up riding in the downtown area. Looping by Progressive Field (home of the Cleveland Indians) I came face to face with the city-block sized mural that was once reserved for the Lebron James 'Witnesses' one. It looked as though the city had put this guy behind them and were ready to look forward. 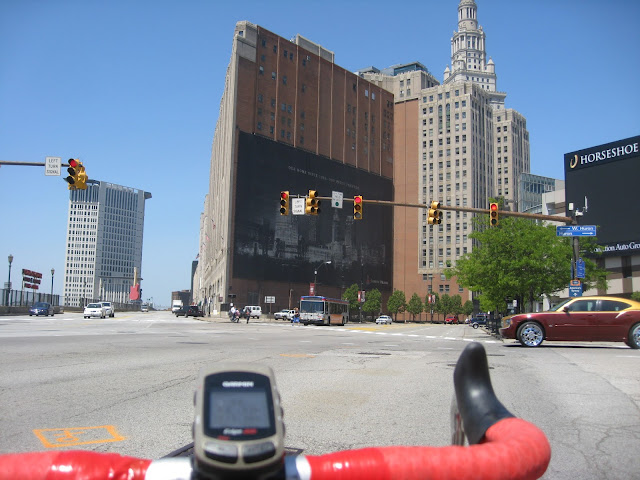 As it just so happened, I was staying in Cleveland the very week the Horseshoe Casino was having its grand opening. I've always had mixed feelings about casinos and constantly wonder what kind of effect-both good and bad-they have in certain areas. As I rode by the Horseshoe, located in the legendary Higbee's department store building, all I could do was hope it would become what the planners were imagining and not like Biff Tannen's Pleasure Paradise. 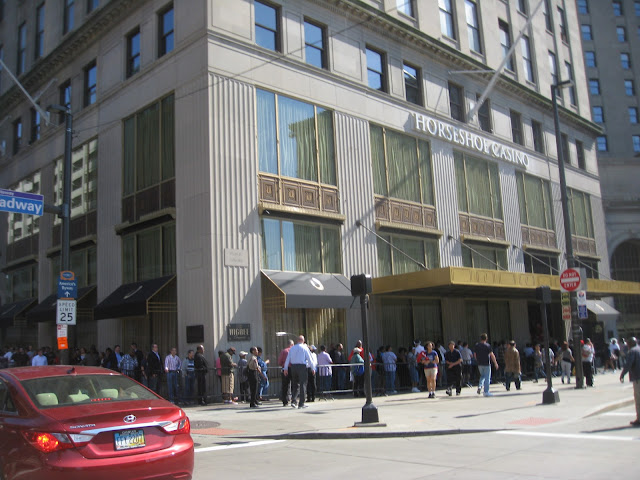 Evaluating the socioeconomic impact of legalized gambling could wait for another time; I still needed to find The Attraction, but first I wanted to see if I could find Blazing Saddle Cycle. With the map I got from The Greenhouse Tavern, I determined I needed to cross the river again; this time on the Veterans Memorial Bridge. Which has bike...wait for it...lanes. 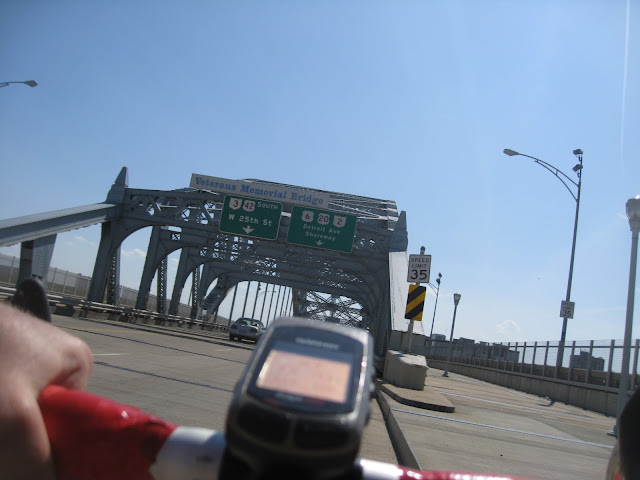 From there it was a straight shot to Blazing Saddle Cycle, a shop that hasn't even been open for a year but I couldn't imagine Cleveland without it – ever. 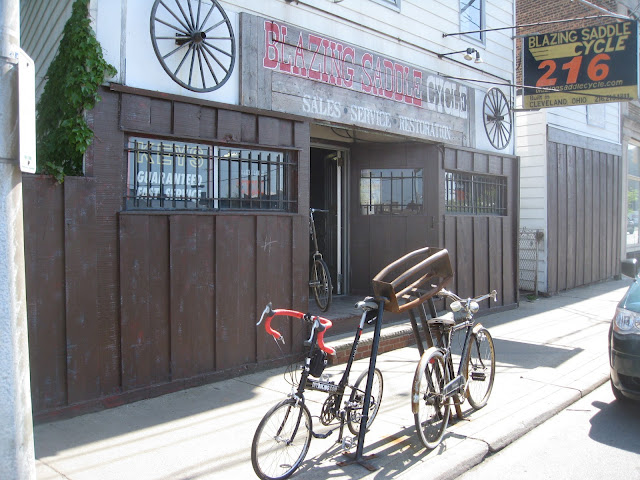 This shop had more than its share of interesting bikes, new, used or under construction. Later that day, I would regret not spending the $350 asking price for the folding tandem, which I'm sure I could have found a way to bring it and the Bike Friday back to the hotel and stowing the tandem in the Element. Even with mountain bike 2.0 taking up a lot of space, there would have been room. Probably. 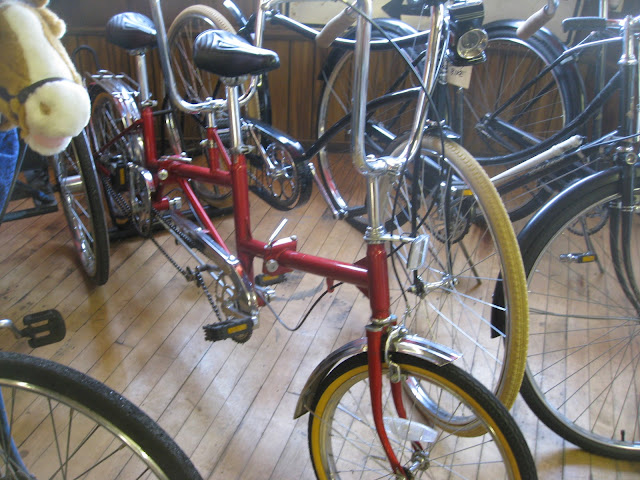 Upon leaving Blazing Saddle Cycle, I once again had to return to the hotel as Grown Up Things were beckoning with an incessant whine. As much as I would have liked exploring Ohio City as long as the muscles in my legs and the sunscreen on my skin would allow, I realized how easy it was to take short and interesting rides in Cleveland.

That theme continued the following morning, when, free from Grown Up Things, I was determined to finally find The Attraction. First, though, I headed down to the shore of Lake Erie to check out the 9th Street Pier, and with it, the Rock and Roll Hall of Fame. 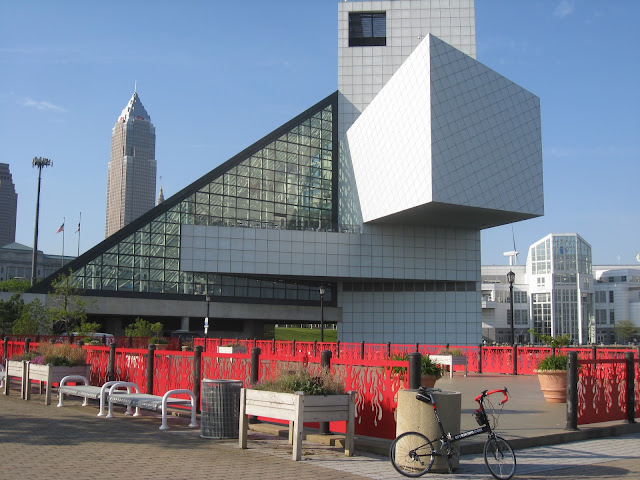 The Rock and Roll Hall of Fame is a great attraction in Cleveland (and a nice looking building) but it wasn't The Attraction I had set out to find. Before I left though, I did allow myself a brief ride along a nearby stretch of the Cleveland Lakefront Bikeway. 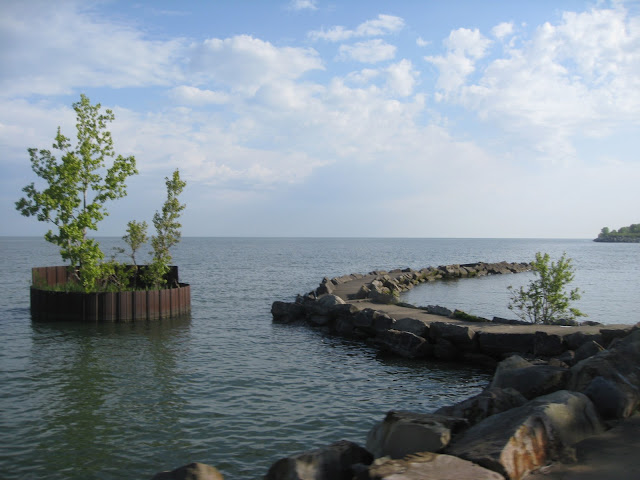 Later I once again pedaled toward Carnegie Avenue so I could cross the bridge into Ohio City. Once again, I not only became lost, I found yet another memorable bike shop: Fridrich Bicycle, Inc. (the side of which contains the mural in the first picture on this post). The business has a long history, having started as a coal and feed store in the 1880s and about 10,000 square feet of retail goodness. I always adore the chance to see things in bike shops I rarely get to see, like a Rhoades Car for example. 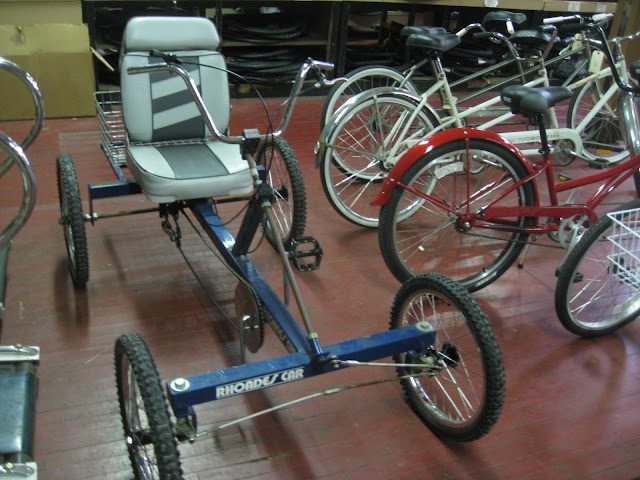 I also saw a few recumbents, which, no matter what anyone says, are cool. I even saw a three-wheel one that made me think of the Budget Supertrike back home. 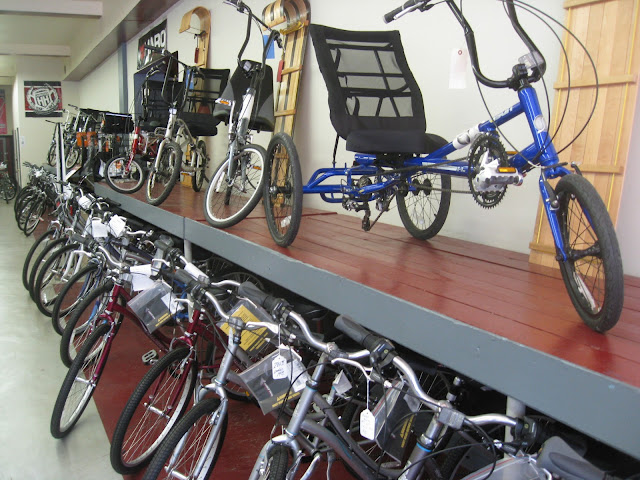 I bought a couple of things at Fridrich's and asked for help in finding The Attraction. They gave me above-and-beyond assistance, and this time when I set off I was sure I'd find what I was looking for. At times, I was able to ride through areas in the neighborhood of Tremont that had clearly seen more bustling times, but still had a certain indescribable something that made me pull out the camera. 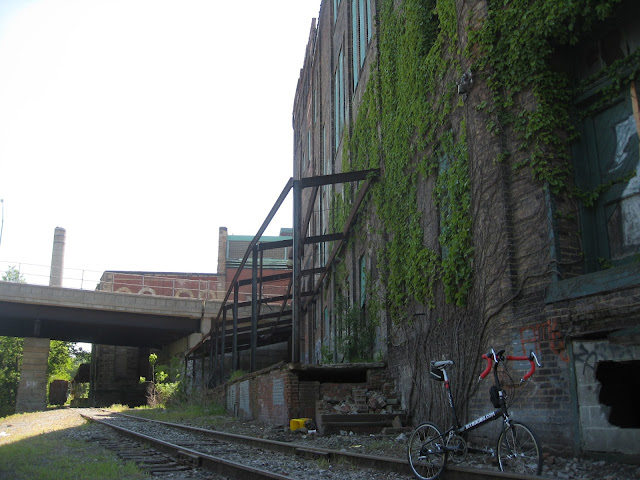 I pedaled on, following the directions given to me by the mechanic at Fridrich's. The sun was bearing down and my water was running low, but after after a few twists and turns in Tremont, I finally found my way to The Attraction. And it was everything I hoped it would be. 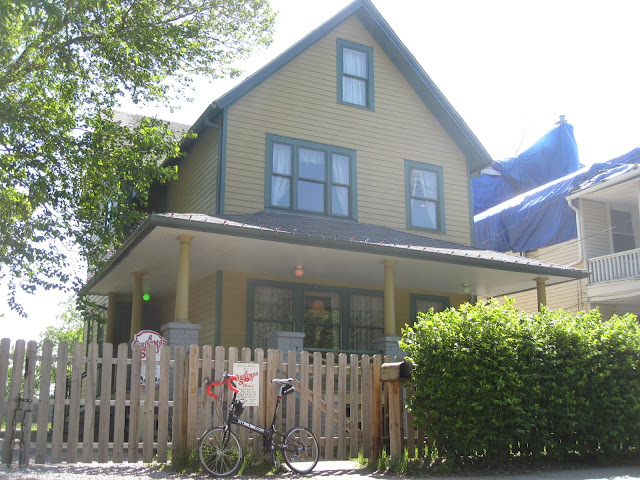 I know, I know: it's silly, especially since there are so many things in Cleveland to do and museums to visit, but I wanted to see the house that was used for the exteriors of the cult film, A Christmas Story. The Higbees building, now home to the Horseshoe Casino, was where the Red Ryder BB gun was first seen by Ralphie. And as I'm sure fans of the film will remember, the street in the movie was called 'Cleveland Street.' And, at that moment, it was. I could even see the famous leg lamp (sorry: 'Major Award') in the window. 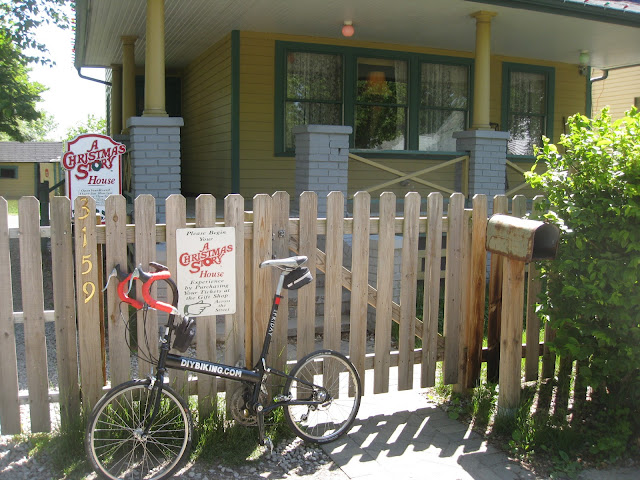 Unfortunately, I had visited the house during a day when it wasn't open. The museum across the street and the gift shop nearby was also closed (no Major Award was going to be sticking out of my backpack on the ride back) but it was still worth the ride into Tremont, which, if I had a finer sense of direction, would have been a lot shorter than it had been.

With that admittedly demented bucket list item checked off, I was now looking forward to a treat, so I made my way back to downtown and stopped at Colossal Cupcakes, not far from the hotel. I was surprised to learn that it had only been open a short while, but it still felt like it had always been there. And like so many businesses in Cleveland, has a bike rack just outside. 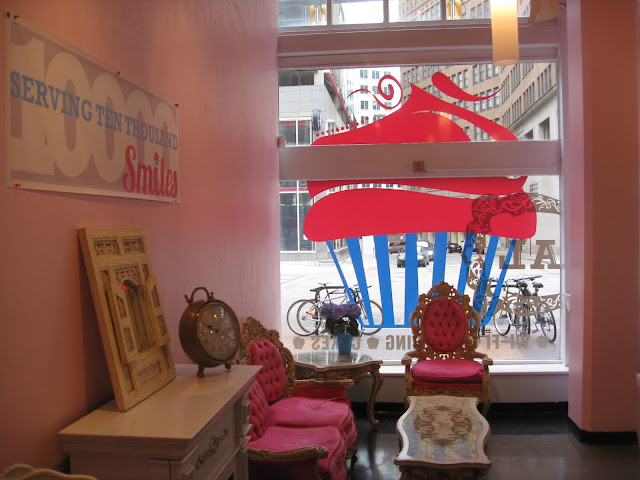 Before long, my visit to Cleveland was over. The city had completely defied my expectations and I couldn't believe it was, on a bike culture and bike facilities basis, so far ahead of so many others I had visited. I didn't even have a chance to check out The Bike Rack, which is a full service bike parking and showers/changing facilities are put in recently to encourage bike commuting. It enough to make person from Stamford weep.

I'll plot a return to Cleveland soon, and I hope you plan your first trip. Thanks for reading. 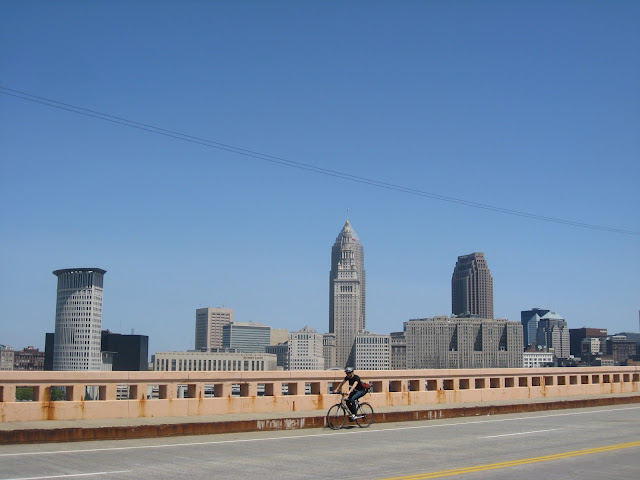