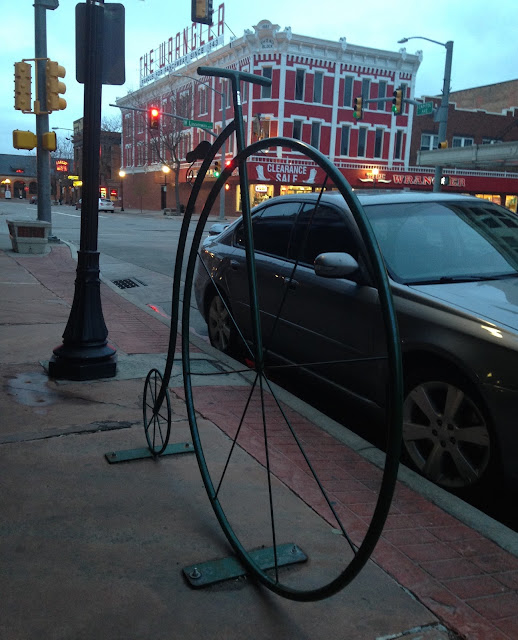 Staying on the edge of Cheyenne, I was dismayed to see rain this morning. I already ruled out sending an invitation to Dick Cheney to go biking with me like the invitation I sent Warren Buffet the day before since I didn’t think he’d have a good time biking in the rain (I also wasn’t sure if he still lived in Wyoming or was still in an undisclosed location).

While the rain bucketed down, I realized that I couldn’t remember a single, solitary time I was glad I decided not to take a bike ride. So I asked the guy behind the hotel’s front desk if I could snag a shower cap and, after stretching it over my helmet, biked off. I was soaking wet before I left the parking lot. 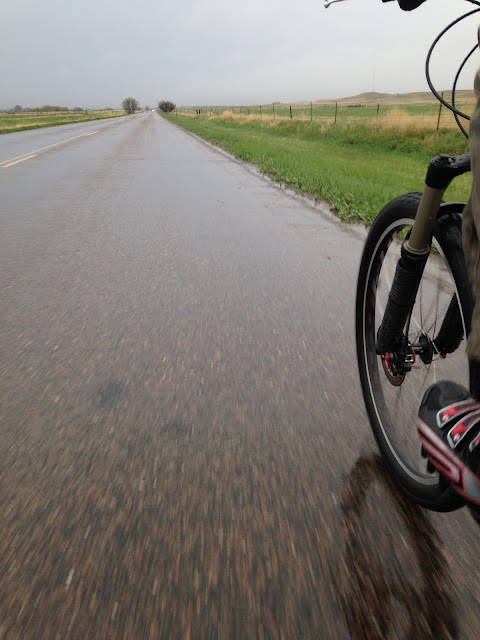 There wasn’t a lot to see other than ranches. But the pickup trucks that passed me gave me plenty of space. 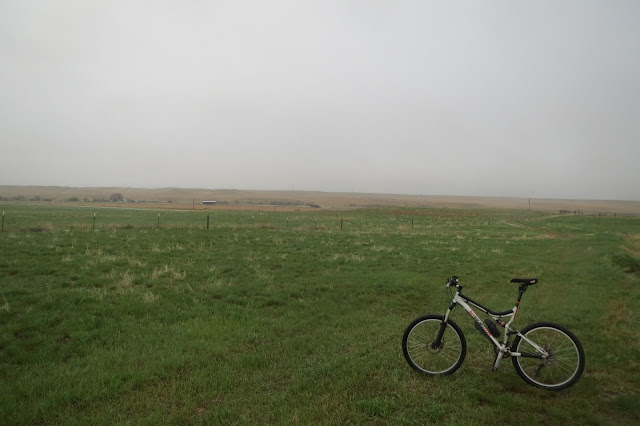 As annoying as the rain was, I was still happy I got to do at least five miles before saying goodbye to Cheyenne and setting off in the car once again. 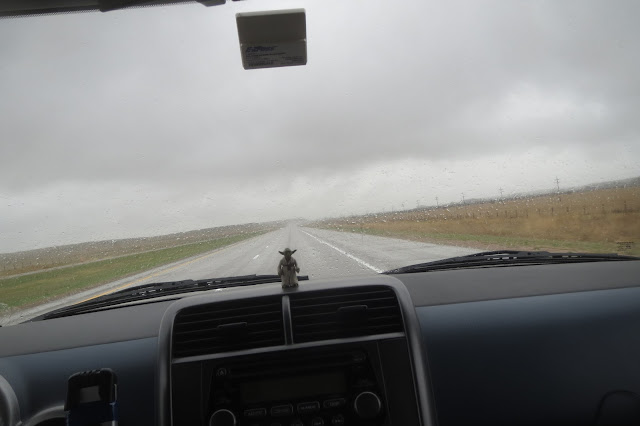 My wife and I were both pleased that, a few minutes after that photo was taken, we were able to finally leave the mind numbing I-80 behind and head south into Colorado.

The landscape began to look more interesting the closer we got to Boulder, where we joined a friend for lunch. Since the rain had stopped, I took a short ride - first stretching the shower cap over my bike seat since that was still wet from Cheyenne. 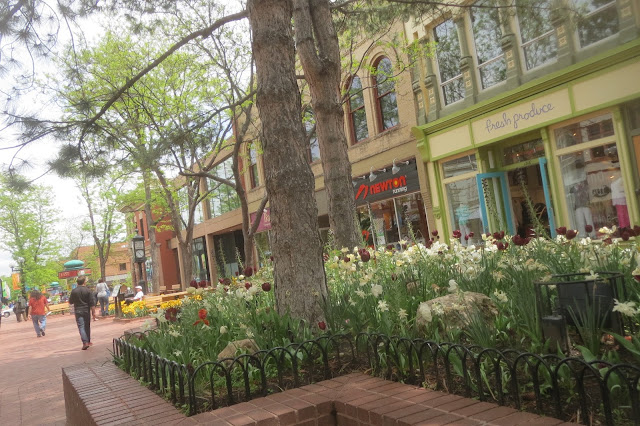 You may know Boulder because I believe the city appears on a lot of ‘top fittest cities’ and/or ‘top happiest cities’ lists. It’s also the place Mother Abigail leads the survivors in Stephen King’s The Stand. I think the line in the book was something along the lines of: 99% of the human race died of the flu, you're being stalked by a half man/half crow mutant, so we may as well live in a bike-friendly community.

While there are a lot of cars you get the feeling the bike infrastructure has a lot to do with the friendly and happy reputation. The more bike friendly the city, the more livable it is. Boulder is the anti-Cherry Hill. 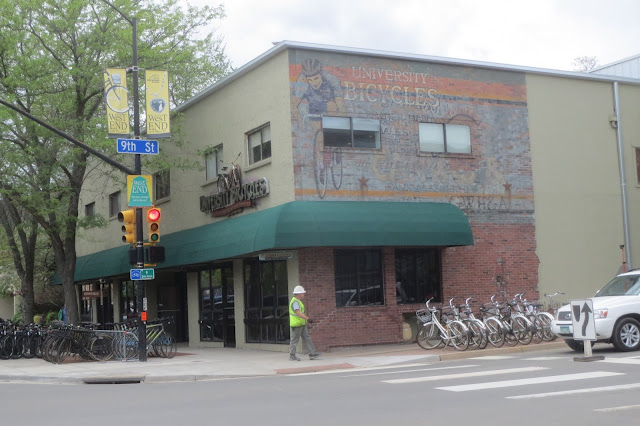 There’s also a correlation between cities like this and the number of awesome bike shops, such as University Bikes, which I got to visit briefly. Not only do they have an excellent selection, but they have a bathroom that just warmed my heart and make me yearn to have a place to plug in my welder once again. 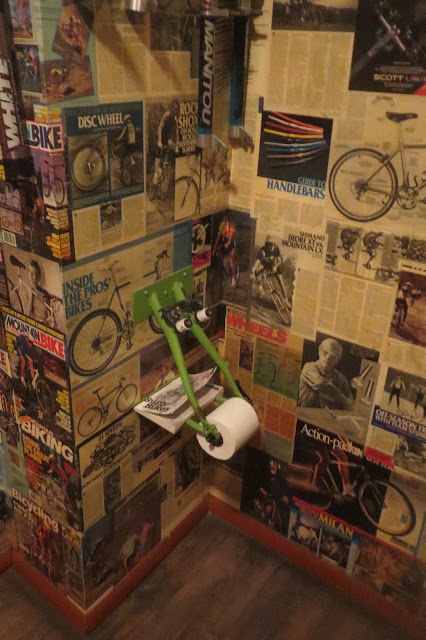 The shop is just as much a cool bike store as it is a museum with a lot of fun and interesting exhibits - including a 1910 Montauk camera cycle which they dubbed as ‘The World’s First GoPro.’ 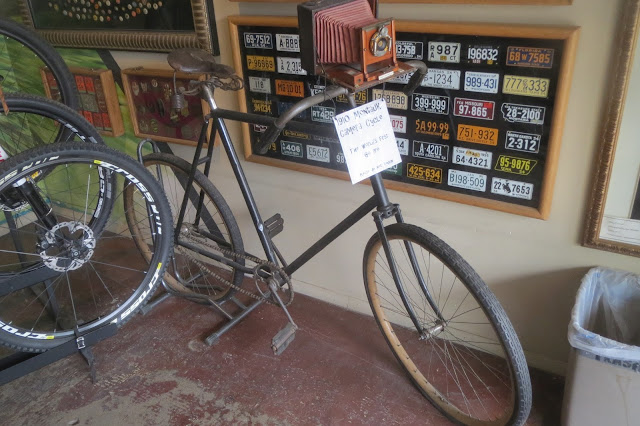 After leaving University Bikes, I pedaled uphill, away from town, hoping to get a good photograph of Colorado's stunning landscape. I wasn’t successful, but I did get to ride about 100 feet of single track, which was just as gratifying. 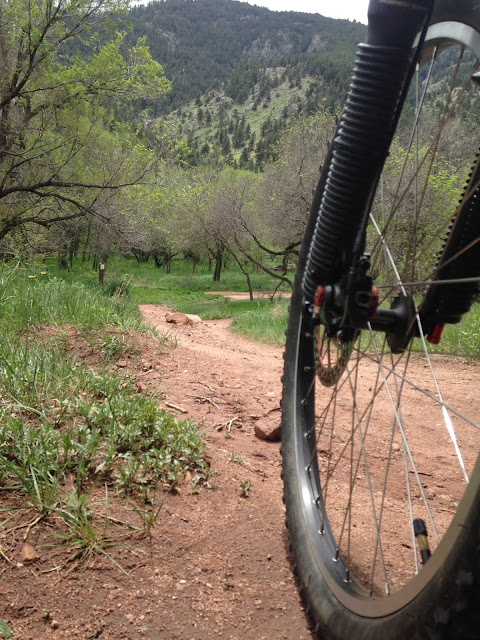 I couldn’t leave Colorado without doing single track - I believe that is in their state constitution - but I knew that after another long stretch of afternoon driving we’d end up in a place I could really put my mountain bike through its paces.

Click here for Morning 6
Posted by Mike at 8:44 AM